The countdown to EA SPORTS FIFA 18 starts right here. The newest installment of the world's biggest sports video game was unveiled to the world for the first time at EA Play over the weekend and we were lucky enough to get a hands-on experience two weeks earlier at a secret event inside Stamford Bridge.

There's no doubt that FIFA 17 was the biggest jump that the franchise had taken in a decade, with the additions of FIFA Ultimate Team Champions and 'The Journey' grabbing headlines and revolutionising the way that people play the virtual edition of the beautiful game.

An early glance suggests FIFA 18 is about building on the huge leaps made in FIFA 17, as opposed to reinventing the wheel all over again. This year, EA SPORTS are adding some polish to their crown.

The most striking bit of information to come from the FIFA 18 drip feed so far has been the blockbuster announcement that Cristiano Ronaldo will grace the cover of a FIFA game for the first time ever.

As the new face of FIFA, it looks like Cristiano has ended the recent pattern of EA SPORTS letting the public select the cover star via a public vote. Given that this has seen Jordan Henderson and the perenially-injured Marco Reus cover the last two releases, this might not be such a bad thing.

EA SPORTS are pushing the line that Cristiano Ronaldo is “fuelling” FIFA 18 and that his involvement with the new game extends to more than just a photoshoot. Ronaldo has been motion captured by EA SPORTS for the game, meaning that the Real Madrid man will have his own distinctive play style in FIFA 18, while the rest of the game’s players will have animations powered by the world’s premiere athlete.

Distinctive animations for certain players are one of the big selling points for FIFA 18’s enhanced realism. This year, players like Raheem Sterling, Arjen Robben and Antoine Griezmann will all have tailored animations and move in the way they do in real life. 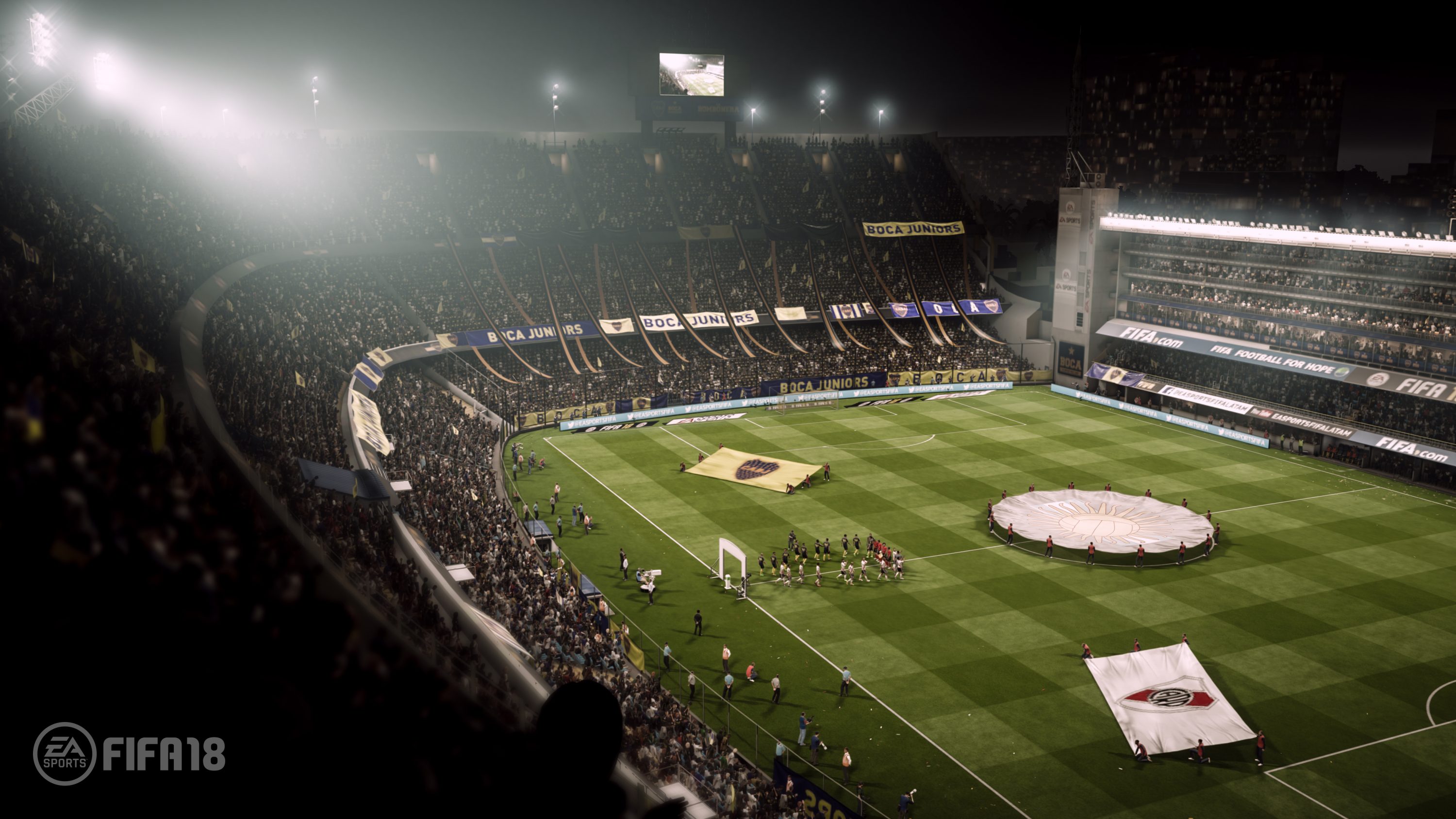 Last year, FIFA was built on the Frostbite for the first time ever, the engine which is used by EA DICE to create the most authentic looking games on the market right now, such as Battlefield, Star Was: Battlefront and Mirror’s Edge.

One of the major upsides of Frostbite is its ability to render real world environments – something EA SPORTS football-specific Ignite engine never had the capability to do – and in FIFA 18, they’re taking Frostbite to the next level and creating the most authentic football environments ever seen in a video game.

EA SPORTS have recognised that for too long, FIFA pretty much treated all of its stadiums and pitches the same. Whether a game was taking place in Dubai or London, the lighting was the same, the grass was the same colour and all the fans behaved in the same way – not echoing the cultural differences fans experience by going to games in different parts of the world.

Culturally-tailoed environments are best seen through the new La Bombonera in FIFA 18. True to life, Boca fans will now hold flags and banners through the stands (the sort you wouldn’t see at Old Trafford), while the pitch will be covered in the types of confetti and debris you expect from 49,000 fans in South America.

Thanks to Frostbite, EA have also reengineered crowd behaviour. Instead of 30,000 fans standing up in unison when the ball hits the back of the net, the crowd will move in different ways and react to what’s happening on the pitch and where – running a player to a certain section of the crowd during a goal celebration will trigger that section of the crowd to spill out of their seats and run towards the pitch, reaching over the railings to get up close and personal with their on-pitch heroes. 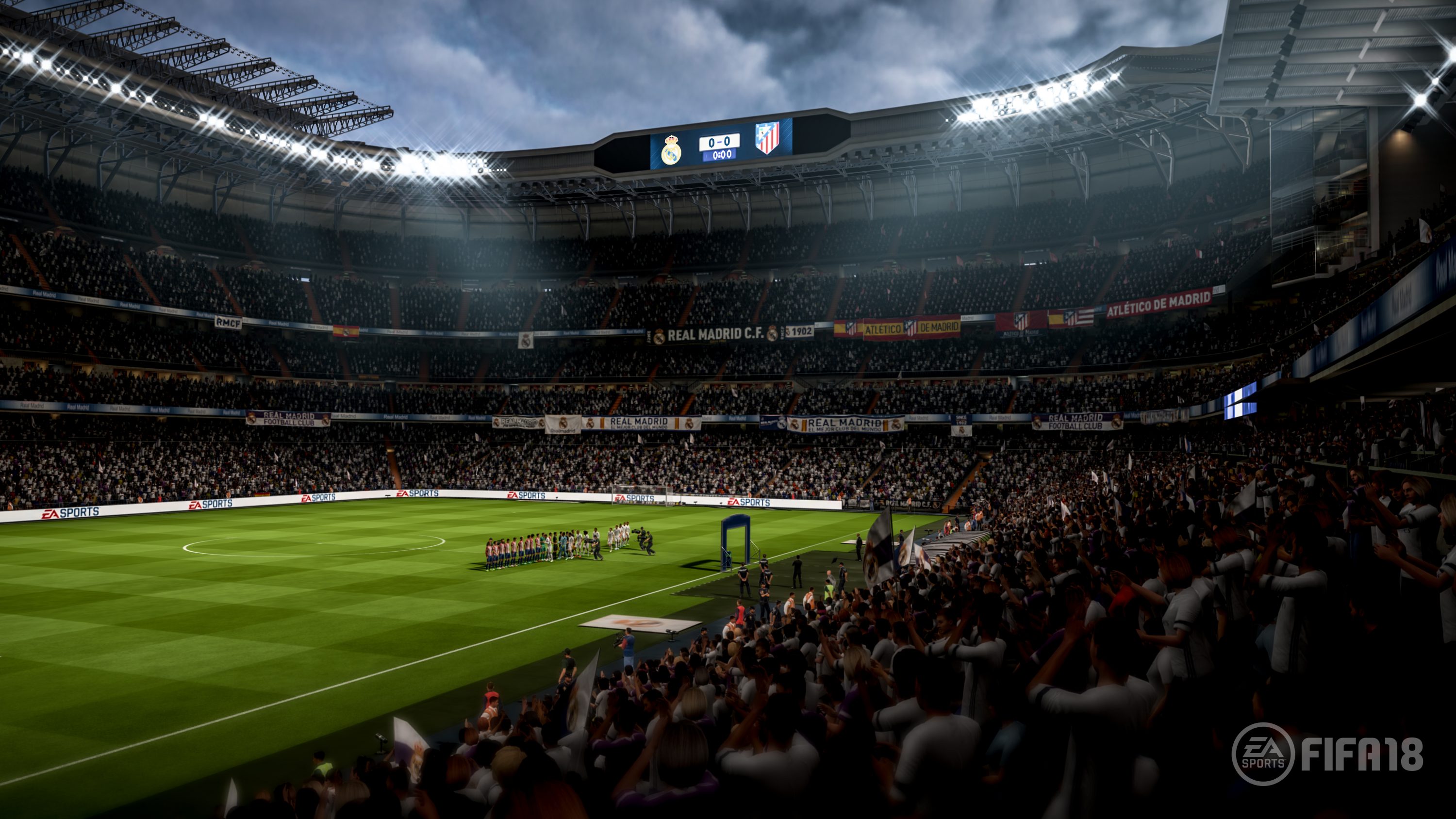 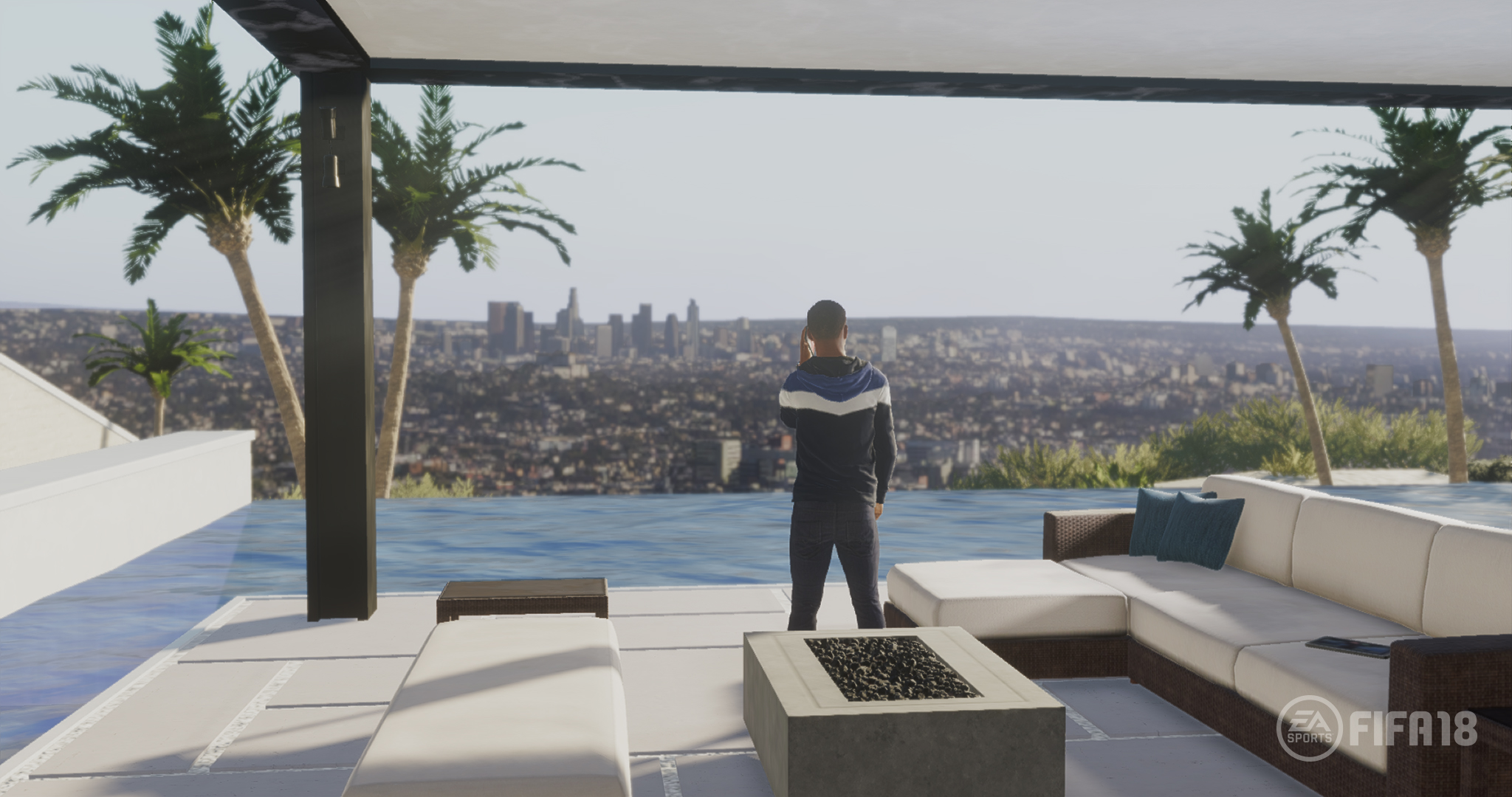 One of FIFA 17’s biggest success stories was the introduction of ‘The Journey’, EA SPORTS’ attempt at an RPG where you guide prodigy Alex Hunter through his first season in the Premier League.

The mode was so successful that it’s just been ported across to the latest installment of Madden and early indications are that EA SPORTS are going to be throwing just as many resouces behind ‘The Journey: Hunter Returns’ this time around.

The trailer for the second season of The Journey shows Alex Hunter coming under the media spotlight with rumours swirling of a move to one of the big club’s abroad. You’ll guide Alex through this career crossroads and enjoy cameos from the likes of Cristiano Ronaldo, Rio Ferdinand and the cast of ArsenalFanTV, who all have their say on Alex Hunter as the game progresses.

One bit of criticism from the FIFA community regarding The Journey was the lack of customisation options available – all Alex Hunter’s looked the same. This time, gamers will be able to present Hunter as they’d like to be presented: choose his boots, his clothes and even his haircut. 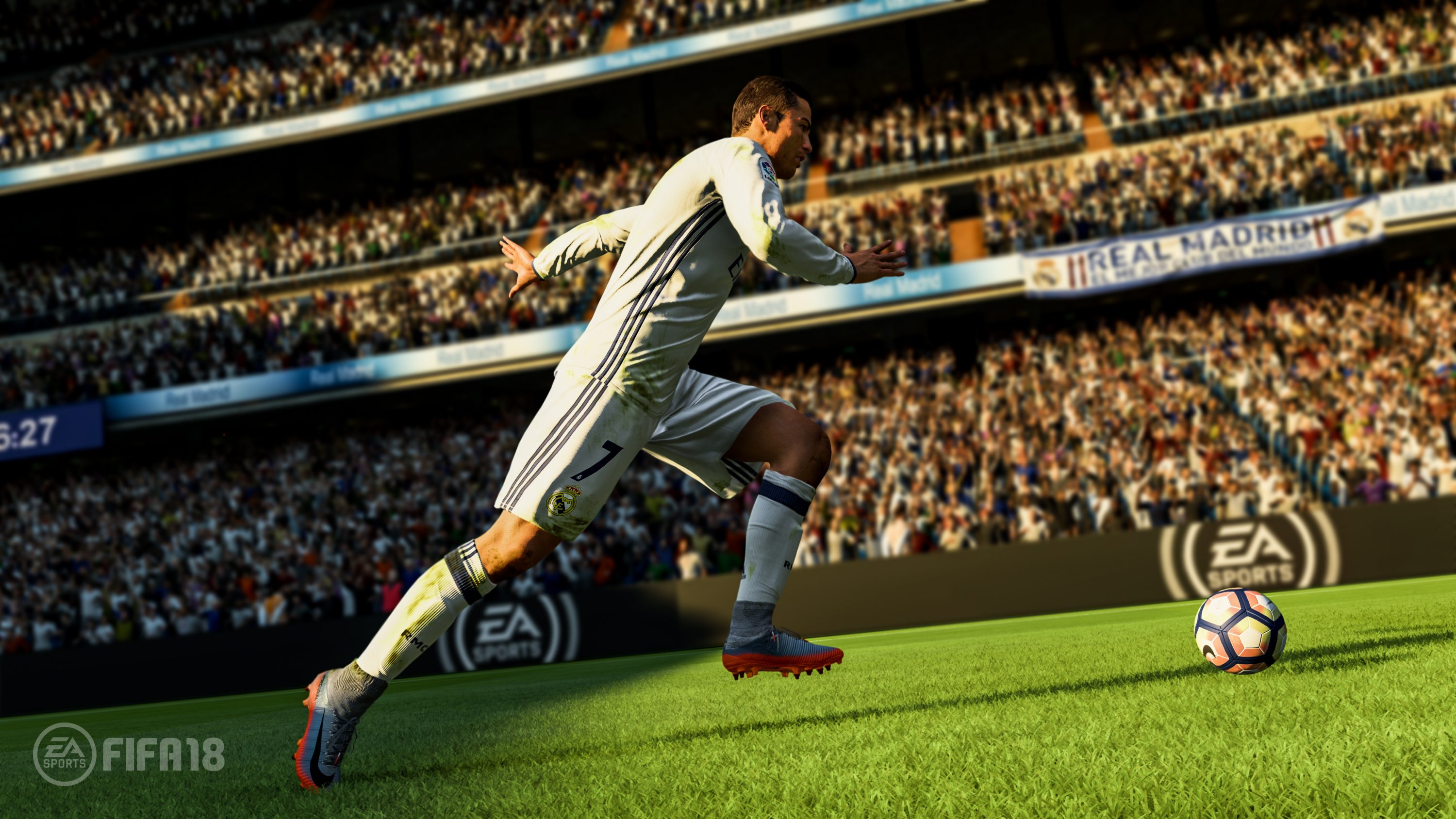 In our hour long session on the game, FIFA 18 felt a lot tighter than its predecessor and corrected a lot of the mistakes that has plagued the franchise for too long. Players are finally able to move quickly at any angle, stopping jittery movements and defenders unable to respond to pacey dribblers. Crossing has also gone under a total rewrite, meaning powerful players like Harry Kane are playable on Ultimate Team from day one and the reliance on through balls to pacey strikers through the back four is finally gone.

All in all though, this feels like a FIFA release that strengthens the game’s offering without making any major leaps forward. In reality, FIFA’s offering is now so far ahead of Pro Evolution Soccer that it can afford to have a year ironing out the game’s quirks with little progress elsewhere in terms of new game modes.

Of course, we’re yet to see the full rundown of what’s new in Ultimate Team. The one thing we do know is that ‘Icons’, formerly known as Legends, are coming to PlayStation 4 and PC for the first time. Game on.

EA SPORTS FIFA 18 launches in the UK on September 29th.