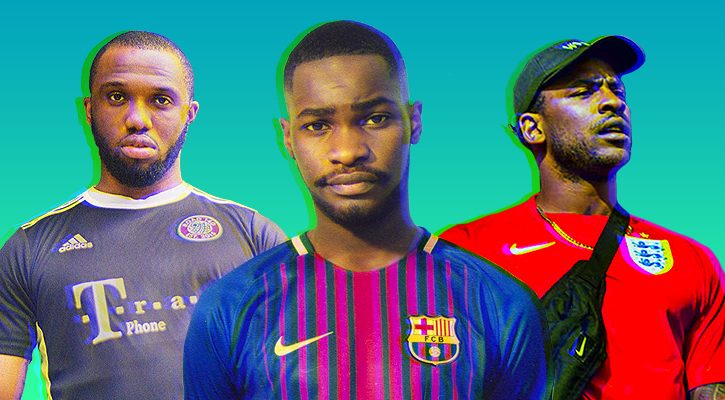 We all know the links between football and UK rap have been intertwined since day dot.

A far cry from the days of Gazza’s “Fog On The Tyne” or Dizzee Rascal and James Corden’s ‘England anthem’ “Shout”, the grime and UK rap scenes are now blessed full of quality tracks that pay homage to the beautiful game.

The last few years have seen the worlds converge on an unprecedented scale. From Dave and AJ Tracey reeling off baller-filled bars while clad in PSG shirts, through to Headie One’s recent release ‘The One Two’ absolutely rammed with references to kicking ball, the interconnection between the two worlds has never been stronger.

So, in the spirit of the World Cup nearing its completion, we rounded up ten UK Rap and grime tracks that were inspired by the best ballers on the planet.

Mischief makes movements in Monaco on this one, where Mbappé made a name for himself before sealing a big money move to PSG last season. The lavish visuals see the South London rapper stunting in the city while talking about his own glo up, which he compares to young Kylian’s.

Manchester melodic rapper Geko pays homage to the new Juventus star – who he compares his own “touch” to on the track – while kicking ball with some friends on some 6-a-side pitches in the video.

“Excellent finish, Mo Salah” became a bit of a recurring theme last year. Salah nearly scored as many goals last season (44) as Headie says “shh” on this one, which was arguably One’s breakthrough track.

The wickedest rhymers are renowned for their football-themed bars in the last few years, and their most recent track salutes those that put in work upfront.

The YGG young gunner pays homage to one of Arsenal’s most-loved CAMs, who unfortunately had his career blighted by injuries. A man who always displayed mad tek on his day, PK exhibits similar dexterity to the Spaniard on the mic, sampling one of the Spaniard’s interview before reeling off his usual, high-octane bars.

Released fresh from Mbappé doing a madness in the Russia this summer, JXSE – who you’ll see has a bit of a habit for naming his tracks after ballers later on in this list – salutes world football’s brightest star by telling listeners to “do the Mbappé,” the PSG forwards’ arms folded celebration he dropped after calmly scoring a banger in the World Cup Final.

Youngs was always gonna pop up in this list, having continually laced his music with football references since starting out. His obsession with football has seen him reel off bars in a number of trakcs and freestyles down the years, with the Manchester United fan often vocal on Twitter about the game he loves most.

“Drogba” is a track that’s lit up dances for a minute now, and Naija’s own Mr Eazi’s just hopped on the Team Salut beat with South Londonder Afro B for a quick remix to freshen it up for more airplay and carnival action this summer.

Born and bred in London, JXSE fuses French and English together on this track to salute a player that everyone knows and loves. It’s a slickly executed track that he labels as ‘AfroTrap,’ which came out to moderate success last year. Revisit it above.

How could you not include this one? The track that properly set two of the UK’s brightest talents careers off, “Thiago Silva” featured a classic grime instrumental reworked with a plethora of punchy bars from the then-newcomers, who showcase their own samba-inspired skill on the mic.