Jesse Lingard stands tall as one of the Premier League’s most engaging characters. From dropping a Milly Rock at the Emirates Stadium to being a focal point of the most exciting England team for a generation, Jesse Lingard is rare in his ability to claim sauce on and off the pitch.

His status as one of the vanguards of new football culture is confirmed in FIFA 19, where he’s blessed with three signature celebrations: a Drake-inspired “flute” jig, the aforementioned Milly Rock and – recently added – his JLingz flex to the camera. It might be overlooked, but Lingard ranks well alongside Daniel Sturridge and Paul Pogba in terms of how much “culture” he brings to the Premier League.

Most recently, Lingard was chosen to unveil Manchester United’s new EA Sports jersey – a collaboration between EA Sports and adidas – that’s now available digitally in FIFA 19 and physically via a limited edition release. To mark the drop, we spoke to Lingard about FIFA, UK Rap and why his character is so important to the modern game.

At The Emirates I Milly Rock ?? #SQUADGOALS

VERSUS: You’re one of the only players to have three signature celebrations featured on FIFA 19, which is a pretty mad accolade. What’s your favourite one to stunt with on the game?

Jesse Lingard: I think the standard JLingz one, that catches my attention more than any other right now. We worked really hard with EA to get that in the game – it’s massive to have that in there. We’ve got a lot more in the pipeline in terms of that sort of stuff so it’s great to have that relationship with them and hopefully we can keep it moving in the future.

Your Milly Rock celebration was included this year, too. You first pulled that out last year at the Emirates and it was one of the most iconic celebrations the Premier League has seen in some time. What was that moment like for you?

It was actually very off the cuff, I didn’t plan it or anything like that. When I started doing it obviously all the other lads joined in as well and it went viral, it was pretty crazy.

It’s obviously the sort of thing that to understand, you need to know hip-hop culture. Was there anyone in the dressing room who came to you afterwards and asked ‘WTF was that out there’?

(Laughs) Nah, everyone was pretty much on it to be fair! We’ve got a young squad anyway and they know what I’m like – I’m always dancing and playing new music, I think they’d seen me do the Milly Rock before in training and stuff like that.

You’ve also just unveiled the new drop from adidas and EA Sports that will be featured in FIFA 19 and also available to cop physically. How important is it to have a sick kit when you take to the pitch?

Yeah it’s always good to have a nice kit and we’re pretty lucky in that ours are always cool, to be honest. We’ve got iconic home colours for United that come out nice and the away kits are always interesting – the pink one from this season is probably my favourite one so far, I’m happy pulling that one on.

Were you a big collector of kits when you were younger?

Yeah I used to get a lot! A lot of international kits especially because I’d always keep it strictly United with my club kits – that’s where my heart always was. 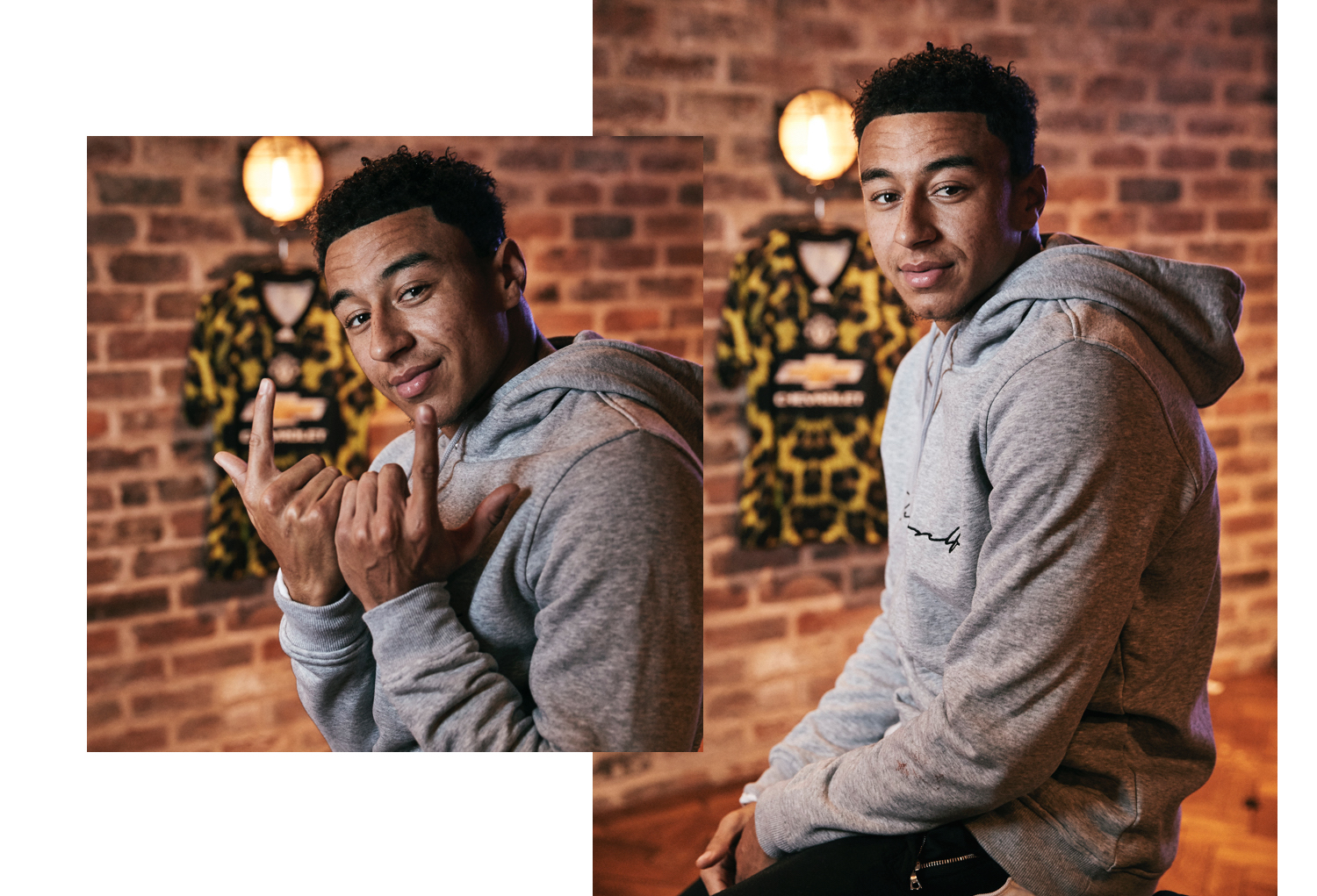 “You never used to see football mixed with music but now it’s something we all want to do.”

And in terms of FIFA, what’s the first edition of the game you remember playing as a kid and how important has it been in your life since then?

Yeah I’ve always played it, ever since I was young. I’m going back years trying to think of the first one I played – it might have been FIFA 2000 or 2001 – and the evolution has been crazy. The game’s always changed and adapted to whatever’s hot at that moment really well.

And do you remember the first time you ever made it onto the game? Was that a big deal for you?

It was obviously sick but I’m not too sure what the year was – not off the top of my head – but I was featured in the reserve team for Man United quite early on, maybe in FIFA 12 or FIFA 13, when my stats weren’t quite so hot…

And did you ever pick yourself back then?

I’ve done it a lot more over recent years and it’s fun – I think you’ve got to have fun with it. It also makes a big difference when you see yourself getting better in the game each year and your real face gets included in the graphics and stuff like that, it’s good.

Yourself and Marcus Rashford linked up with Stormzy and Michael Dapaah recently for a game of FIFA – what was the vibe like? It looked like there was a lot of energy in that room!

Yeah that was a good vibe, that was a good day! It was filmed so you can see what we were doing – we tried a couple of different game modes, ‘No Rules’ and stuff like that. Obviously we got the win in the end – I wasn’t gonna get beat by them…

You’re in a privileged position of being able to link up with rappers and icons from other worlds on a regular basis, do you enjoy that part of your lifestyle?

Yeah definitely and I think that’s something that’s changing within football. If you go back a few years, you’d never really see football mixed with music and stuff like that but now it’s something we all want to do. It’s always good to meet people from different walks of life and share our experiences, learn a bit maybe…especially when you’re fans of their music or what they do and stand for.

United in particular have got a lot of fans at the minute who are big stars in grime and UK rap. People like Not3s, Headie One, Mist are all vocally backing United – do you bang their music out a little bit more when you know they’re United fans?

Yeah there’s a few that we see quite regularly at events and stuff like that. There’s a couple that I’ve become quite good friends with, someone like Not3s I speak to regularly so that’s cool, I try and get to a few gigs when I can and support them back.

“It’s crazy to see someone make a song about you and you’ve got to appreciate that sort of love.”

In terms of what you’re banging out currently before a game, who are the names making it to your playlist?

There’s always a bit of Drake but at the minute I’m listening to Lil Baby’s album and 6ix9ine just dropped an album that I’m making my way through. But I do also pick out stuff of different tempos, it’s not strictly hype music.

Did you ever get to check out ‘Lingard’ by Malachi Amour and Manzo?

Yeah, yeah, yeah! I rated that, it was mad. It’s crazy to see someone make a song about you and you’ve got to appreciate that sort of love – I was listening to it and banging it out in the car, it’s a mad feeling but it’s great.

And ballers getting namechecked in lyrics is happening more and more, you’re definitely all for it?

I think you’ve got it own it. I definitely embrace it and I fully appreciate anyone that’s taken their time out and created something for or inspired by me, it’s special.

Yeah I saw that…Memphis is just that sort of guy, he’s always like that. He’s out there but he actually keeps his feet firmly on the ground, he’s a good lad.

You’re obviously a huge music fan, would you ever be tempted to step into the booth and try to create something?

On the pitch, I think the country is still buzzing from you and the England squad achieved at the World Cup this summer. What do you put this revival down to?

It’s hard to say but I think we came back off the World Cup very confident and we’ve managed to keep that going. Some new players have come into the squad too – you look at Jadon Sancho – but they’ve adapted and contributed. That’s all down to the environment around the team right now, there’s a great spirit and attitude in our squad.

I mean every age group for England is pretty much killing it – how much chance do you have to see the Young Lions do their bit while you’re on international duty?

The whole England set up is doing great, the U21s are really pushing to break through to the seniors with how they’re playing right now. And lots of the age groups are getting good tournament experience which is only going to help us in the long run…we know there’s a lot of good talent coming through and we should recognise the club game’s importance in that process, too – not just the England set up.

I think everyone knows you at this point as a very positive and creative guy. How important is it for you to be expressive and have fun in all aspects of your life?

I think that’s just my character – life is all about being yourself and you’ve got to do what you think is right for you at every step of the way. I just try to enjoy myself every minute of the day, whether I’m on the pitch or off it and I’ve always been like that – I think it’s a healthy state of mind to have.

You came out with your JLingz brand earlier this year, how’s that project gone so far and what was your motivation moving into style and design?

It’s something I’ve always been keen on doing and at first, it was pretty much just meant to be something for my fans but I’m trying to do a little bit more with it now – our latest line is called ‘Be Yourself’ and that kind of says it all. It’s all about being you, being positive and not letting negativity affect your outlook. We dropped that pretty recently and yeah, I’m happy with it so far.

Jesse Lingard was speaking as EA SPORTS and adidas Football collaborated to release special edition jerseys for FC Bayern, Juventus, Manchester United & Real Madrid. The jerseys are now available in EA SPORTS FIFA 19 for fans of the four clubs, or via FIFA Ultimate Team packs and Weekly Objectives. To find out how to unlock the kits and to pick-up your copy of the game ahead of Christmas, head to easports.com.