In this new feature, we bring some of the best musicians in the UK back to where it all began and explore how they first fell in love with the beautiful game. Music has always been a huge part of football. In the same way that US hip-hop artists dream of playing in the NFL or NBA, UK MCs and producers have an identical love affair with football.

The parallels between sport and music culture has never been stronger. We'll explore this relationship in VERSUS Jerseys, taking artists back to their roots while they rep their colours in some of the game's most iconic retro fits. This time out – in a Carnival special – we take new wave UKG pioneer Conducta to Notting Hill where he'll be shutting it down this weekend in the latest drip from adidas and Arsenal.

Conducta is strolling through Kensington’s Kyoto Garden with the self-assured bop of a man who knows he’s got his carnival outfit sorted. Turning the heads of everyone he strolls past as the sun starts to poke through the clouds in West London, all eyes are on him. “Oiiii mate, where did you get that from?”, shouts one of the groundskeepers strolling past while we chat during our shoot. “Dubplate special”, Conducta shouts back, donning adidas and Art of Football’s bespoke Arsenal pieces designed specifically for Notting Hill Carnival.

Conducta is a man who is obsessed with football shirts. Boasting a collection that is over 100 deep, he’s taken his haul to new levels recently after guaranteeing to buy a shirt from any city that he sets foot in. After flexing in his Euro 96 France shirt this time last year, it’s safe to say Conducta has levelled up with this year’s carnival attire – with the reloaded 'Bruised Banana' kit mashed up into a full-body fit that will be popping in the sunshine all weekend long.

We’re striding around the area where he crafted his now Gold-certified heater, “Ladbroke Grove”, with AJ Tracey. Initially making a foray into the Top 40, "Ladbroke Grove" is now on the way to going Platinum, having been blasted out of car windows and spun continually by DJs at festival slots all summer long. The unexpected commercial crossover has ushered UK Garage firmly back into the mainstream – but the Bristol-born, West London-based producer is more than just that track.

Over the last few years, he's steadily been bringing the foundations of 90s garage into the modern day world, armed with his newly-established Kiwi Rekords label and a host of new talent who are instigating a new wave of UKG: NUKG.

While the latest adidas x Arsenal fit isn't on general release, you can guarantee you’ll be seeing plenty more Gunners shirts across Notting Hill this weekend – probably with some UKG heaters ringing off in the background. We caught up with Conducta in the attire, before he wears it at his Kiwi Karnival showcase in Notting Hill, to talk on his football shirt obsession, shutting down summer with AJ Tracey, and why UKG is as important as it's ever been. 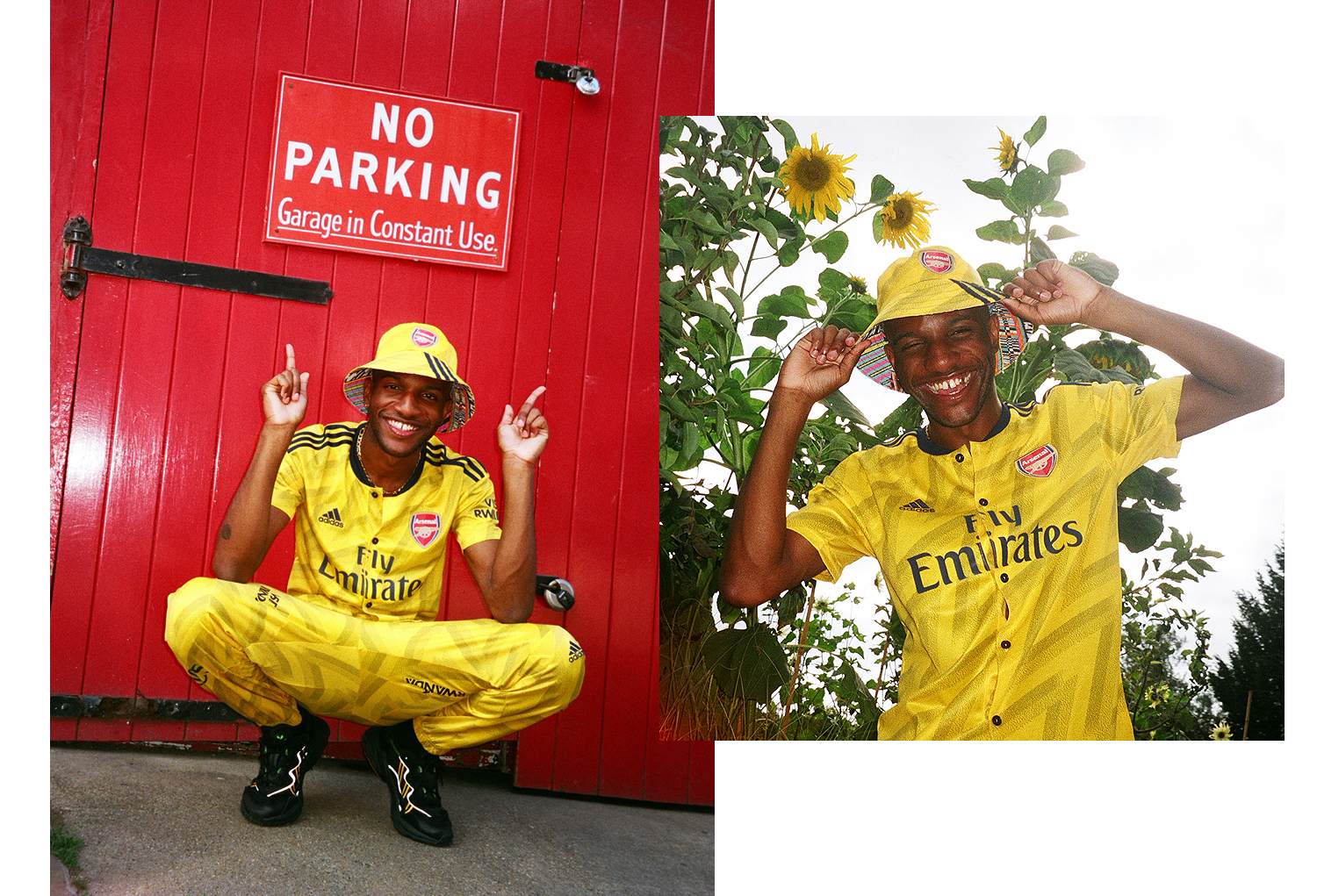 VERSUS: We’re here in Notting Hill in West London, close to where you produced your Gold-certified track for AJ Tracey. What does the area mean to you?

Conducta: I produced the track just down the road from here. When I originally moved up here from Bristol, I was in north by the Emirates for a bit but then I moved to west with my manager, and it’s been my home ever since. We’re here now actually by Ladbroke Grove before carnival, and it’s sick to see AJ put Grove on the map the way he has done with the track. I definitely feel like an adopted child of West London now.

You’re a huge Arsenal fan. Was it always football before music growing up for you?

Football was definitely my main squeeze growing up. I played with Joe Bryan growing up and I still kick ball regularly now. I used to play striker and centre back – so I’d probably model myself on David Luiz…

There’s something beautiful about intercepting stuff and being ahead of the game. I still play 5-a-side now, so if anyone wants a game, hit me up on my DM’s.

When did you realise music was your calling after football?

My parents suppressed football for time, so music was the next best thing for me. It was always a dream of mine so I just kept on pursuing it. My dad said something about “if I knew how much footballers would end up earning I would have pushed you to do football”, but I think he’s pretty happy with how the music thing has turned out.

What inspired you to first start supporting Arsenal?

Arsenal was a big family thing for me. My dad’s Nigerian and he actually went to school with Kanu, so there were serious ties there. Kanu – for me – was the GOAT and I always associated his playing style with mine. I’m kinda lanky but I’ve got decent tek, so he was the first route in. Then growing up, I just used to watch Arsenal on TV and see the red of Highbury…it struck a chord. I also got mad gassed off Arsene Wenger’s name cos it sounded so much like Arsenal, and I realised this was the team for me!

I also had a massive love for the French players at Arsenal and French players in general. Thierry Henry, Zinedine Zidane…mad iconic. When I was six-years-old, I packed up my Paddington Bear suitcase to go and link them after they won Euro 2000, just because I thought they were so sick! 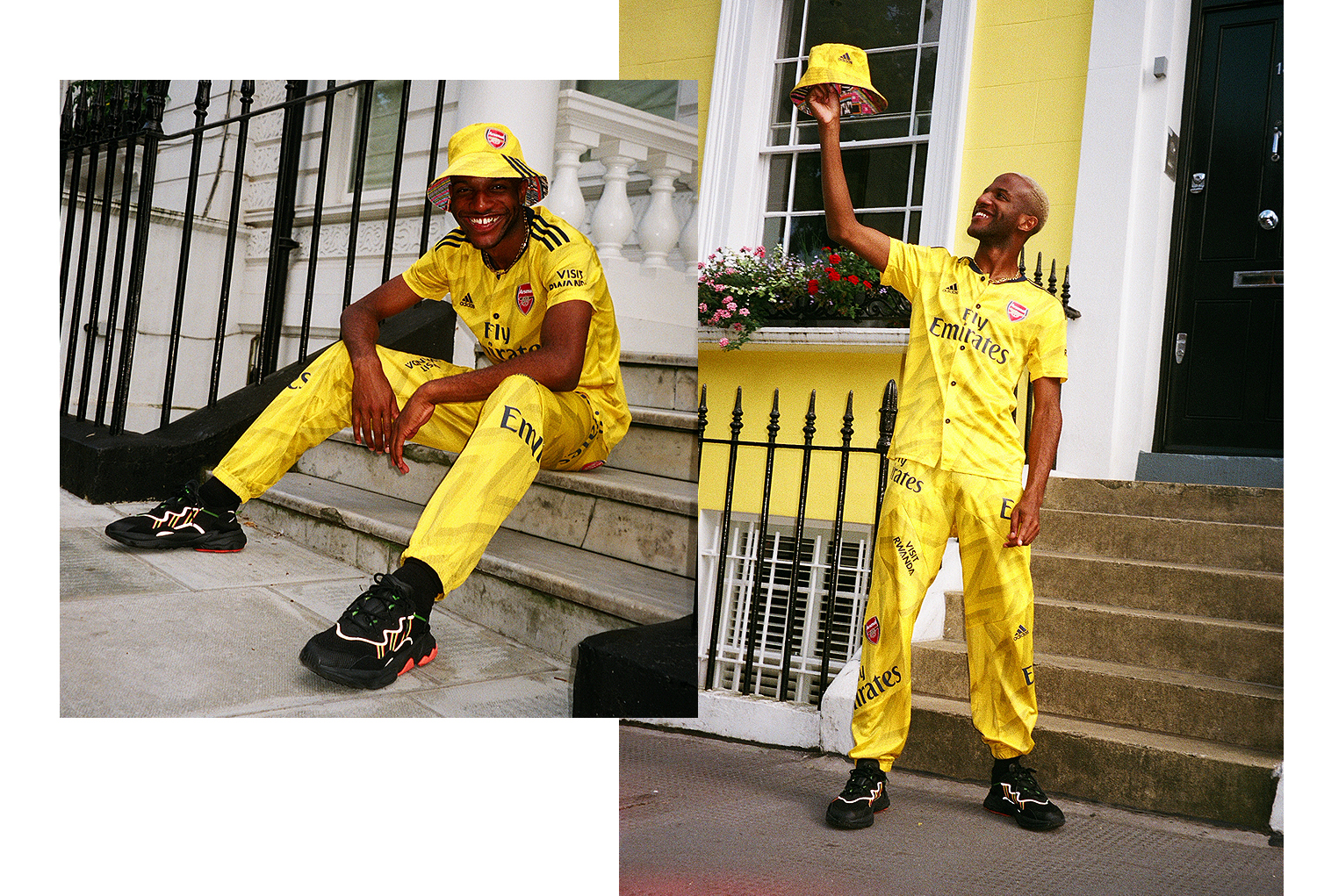 “I started collecting shirts from cult players – it started with Okocha and went from there.”

You’ve been collecting shirts for years. What first got you hooked?

It actually began when the Arsenal banter era got going to be honest. I felt I needed to find a way to fall in love with football again, so I just started collecting shirts from cult players and the sort of guys I used to have on my wall. It started with Okocha and it went from there. Music was going sick around then too, so I had a bit of disposable income, and I put collecting records to the side and replaced them with shirts.

I know maintaining a record collection can get mad addictive, with hundreds of hours spent on Discogs. Was it a similar process?

100%. eBay just became the new Discogs for me in that respect, it’s a similar sort of thing. I’ve got like maybe 100 shirts now and I’ve got them all colour co-ordinated in my wardrobe.

My shirts are actually way more organised than my records. My wardrobe is honestly the only tidy bit of my room.

What is it about football shirts that makes collecting them so addictive?

For me, when I see a player on a particular shirt, it takes me back to the exact time when I watched them play on Match of the Day. Like a good goal, a good tackle…it makes me feel a certain type of way about a player – the same way a certain tune will take you back to a specific moment in time.

What’s the hardest shirt you own? What’s the most expensive? 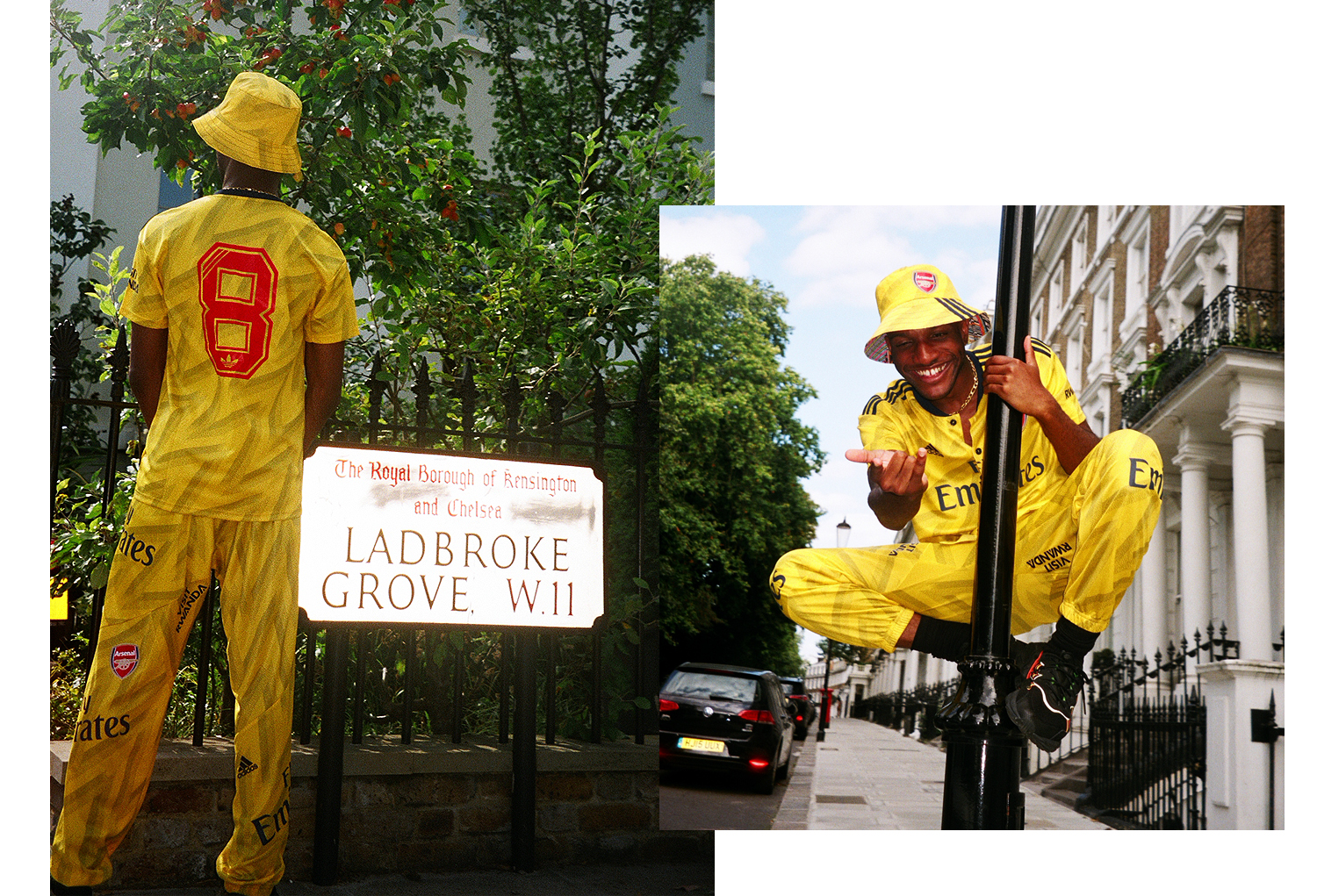 “Every city I play at now, I’ll get their team’s shirt for me to wear on stage.”

What’s the shirt equivalent of the track you’d play to save a dance floor?

France’s kit from Euro 96. I actually donned that to carnival last year and it went off! Everyone absolutely loves it. It’s sort of regal, it’s got this collar that’s got gold in between the red, white and blue, so it’s just a classic shirt. People know you’re there when you’re donning this one.

You’ve started wearing shirts from teams in every place you’re playing at these days. Talk us through that..

Every city I play at now, I’ll get their team’s shirt for me to wear on stage. I started doing it after playing a gig in Slovakia, so I bought a Marek Hamšík top, and it’s just gone on from there. I’m obsessed with history and I’ll get the local team from each city I play at. Sometimes it gets tough though – in Sweden I played in Stockholm, and there are four teams there, so you have to select a team from the city. I ended up choosing Hammarby as they’re the team of the people.

I actually broke a habit recently – I usually refuse to wear shirts from other Premier League teams. I was playing in Liverpool on the night of the Champions League final when they played Spurs and being an Arsenal fan, it just had to happen! I got a cold Reebok shirt from 2001 with Robbie Fowler on the back. Vuj and Specs are advocates of ‘No Rules’ when it comes to doing stuff like that, so I thought I’d mix it up. I’ve done that in Sheffield with a shirt too, as I rate Billy Sharp. 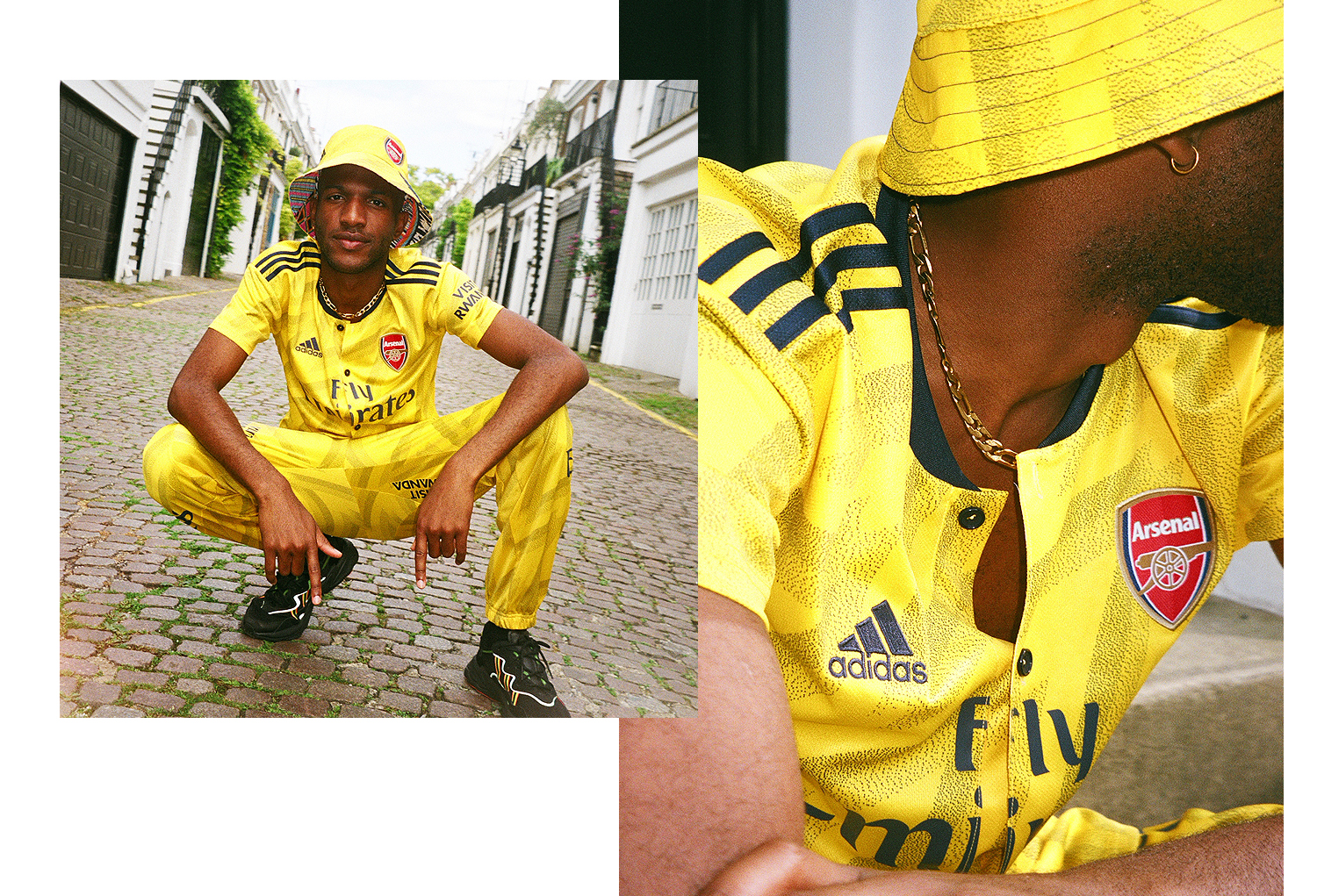 “With UKG and Kiwi Records, I’m just trying to bridge the gap between old and new.”

You’ve been pioneering a new wave of UKG – how was it been to be at the forefront of the scene and see it develop?

It’s been nice because with UK music, there’s always ebbs and flows with the way it works. What we’re seeing now – with the popularity of UKG – is a culmination of many factors, but there’s been a strong underground and we’re really just trying to push it across the country so everyone can enjoy it.

What do you think of the state of UKG at present?

It’s in a good place. There’s always gonna be push back from people who feel like they’re not involved, but with Kiwi and the new wave of UKG in particular, it’s an inclusivity thing. I’m just trying to bridge the gap between old and new.

When I moved to London, I never had that. I was 18 and on the same line up as Wookie and MJ Cole, but that was it. Now there’s a benchmark to look up to. You can want to make a tune like Mind of a Dragon, or Preditah, or Sharda, or Sammy Virji…with Kiwi Records, there’s now a platform to help put people on.

What exciting stuff have you got in the pipeline with Kiwi Records and other projects?

There’s gonna be some exciting stuff with Kiwi soon. I’m going on a tour of Asia and there’s lots more music and other stuff to come in due course. Also might be doing something more substantial with VERSUS soon – so keep it locked!