While Pep Guardiola’s all-conquering senior team are balling out at the highest levels of the game, Manchester City are already creating the club’s next breed of superstars behind the scenes.

The Premier League champions – who started a 10-year partnership with PUMA this season – have one of the most advanced academies in all of Europe, and it’s already turned out some of the generation’s brightest ballers including Phil Foden and Jadon Sancho. The club’s latest group of elite level talents are ready to follow in their footsteps and change the game, stepping out to the pitch in the new PUMA Rush Pack, which is inspired by the concept of ‘Playing Without Limits’.

Playing without limits is something that defines City under Guardiola, and that’s dripped down to the younger age groups too, with the U23s destroying Liverpool 4-1 in a statement win in an early-season PL2 fixture. At every level of the club, City are playing football from another dimension.

We went inside Manchester City’s state-of-the-art Etihad Campus to go one-on-one with the club’s new school of elite young talent, as they suit up to break expectations and make an impact on Pep Guardiola’s senior squad in the new PUMA Rush Pack. Rowan McDonald, Louie Moulden, Fisayo Dele Bashiru and Keke Simmonds aren’t here to make up the numbers. 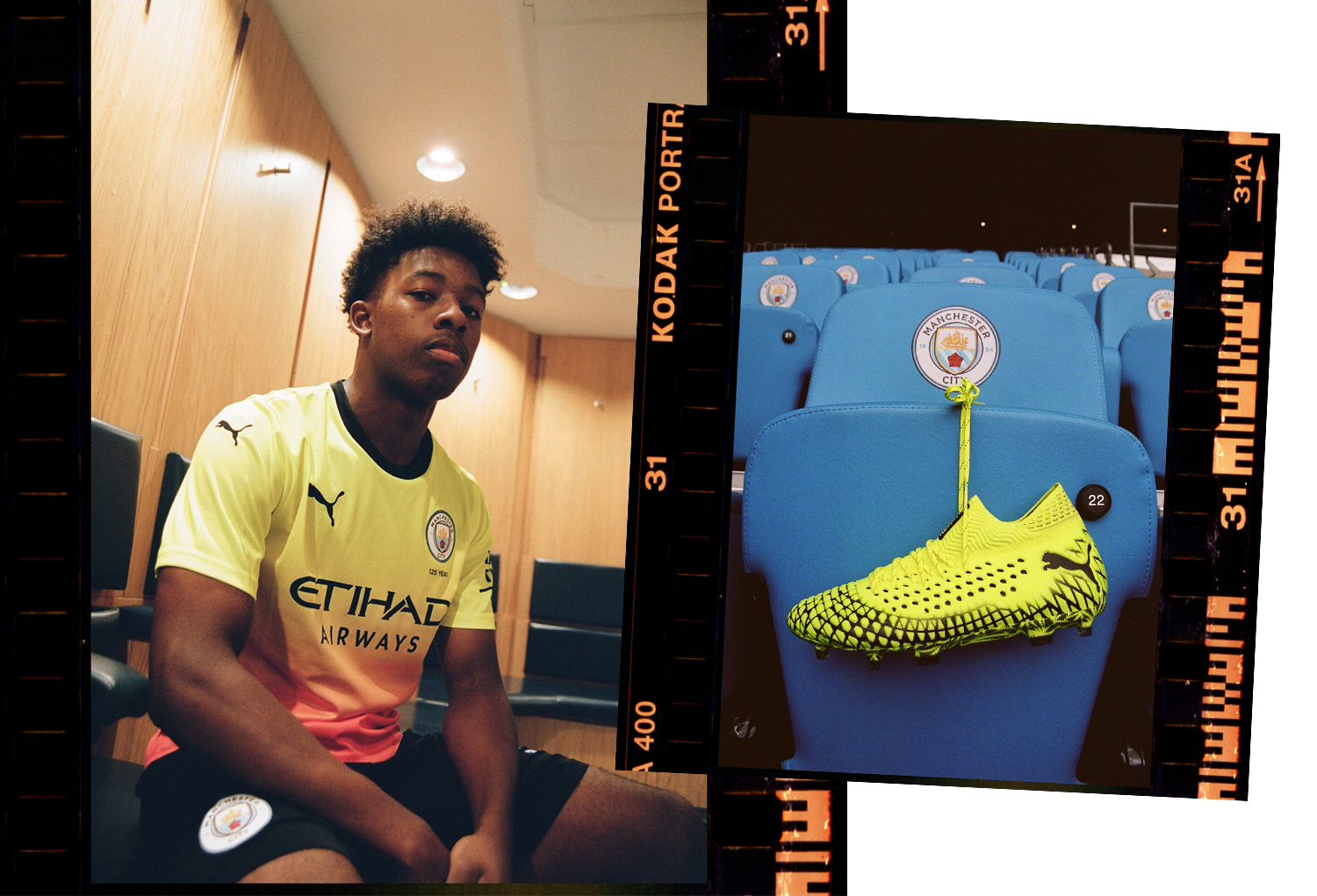 VERSUS: What are your first memories of football and how did you fall in love with the game?

Rowan McDonald: The first football stuff I remember doing was going to soccer schools in Oldham and playing the game with my friends growing up there.

Louie Moulden: I was always playing football with my dad growing up and then it was all about playing Sunday League and that sort of stuff as a kid. I’m from Bolton – so there’s not a lot else on there other than football!

Fisayo Dele-Bashiru: Primary school! I was always kicking ball from proper young, aged four or five. I was brought up in Gorton, which is five minutes away from here – everyone in that community were City fans as it’s the birthplace of the club, so it’s all I’ve ever known really.

Keke Simmonds: I was here at City kicking ball from like five or six. City’s been a massive part of my life since then.

And who was your first football icon? Everyone has that one baller that they had posters of as a kid…

FDB: Ronaldinho! I pretty much spent my childhood watching compilations of him on YouTube and his spell at Barca was so sick – he’s the guy I always loved to watch.

KS: It’s the exact same for me – Ronaldinho, man. Watching all his compilations on YouTube was a big part of my upbringing.

LM: I’d have to go a bit left field and pick Jussi Jääskeläinen – might sound random but I’m a goalkeeper from Bolton and he was the man when I was a bit younger!

RM: Vincent Kompany for me. He’s a City legend and plays football the way I like – he always takes to the pitch with passion and intensity. He was always inspiring to me growing up.

What sort of player are you when you’re on the pitch?

RM: I’m a defensive midfielder but I like having the ball at my feet. I’m a good passer and I like getting stuck in.

LM: I’m a no-nonsense goalkeeper, who’s also good with my feet. It’s an aggressive style of ‘keeping your taught here – and that’s learned from the top down. I try and come off my line a lot and dictate from the back.

KS: I’m my own player! I don’t base myself on anyone really. I’m creative and attacking, so always looking to make stuff happen. 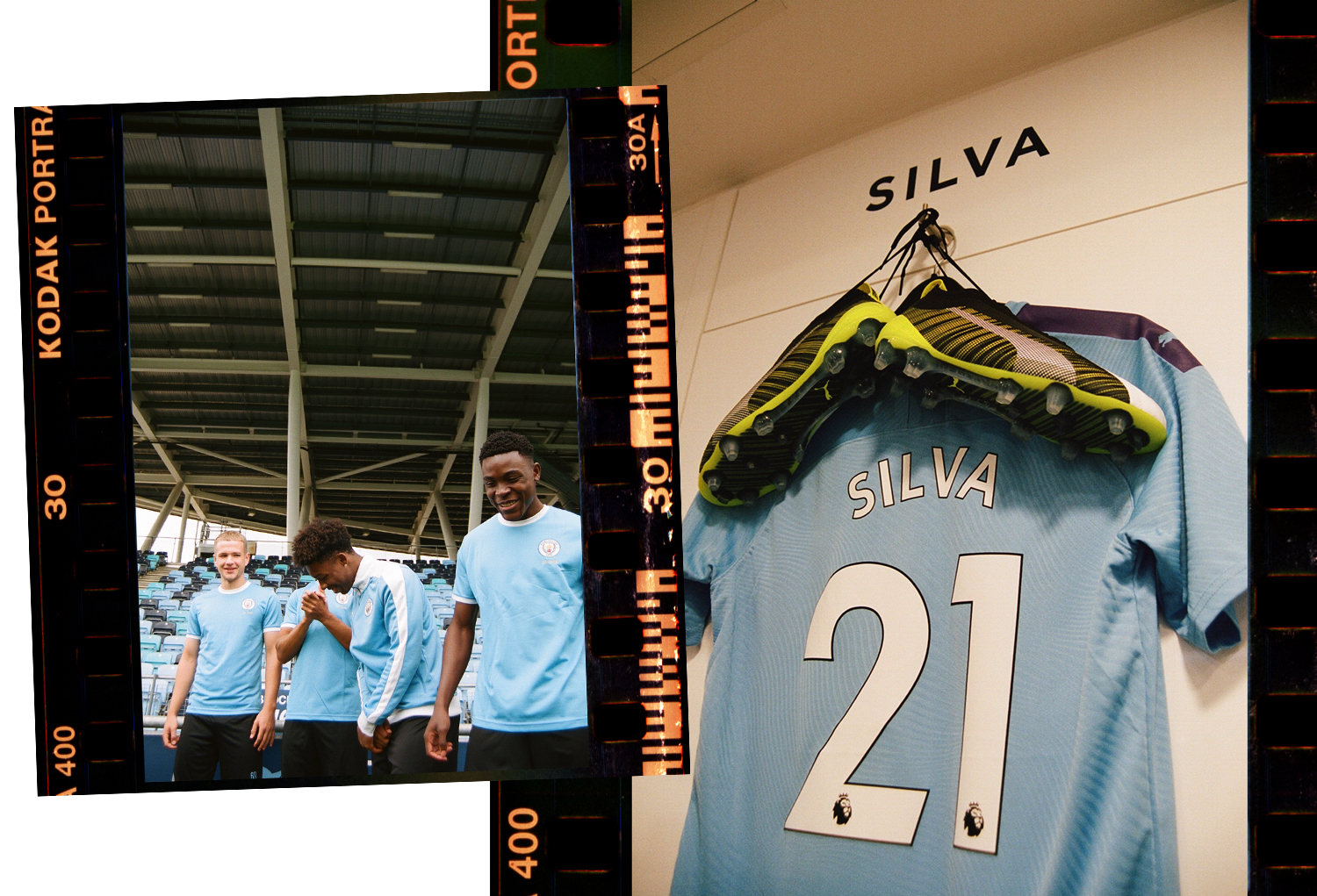 “I’m a big fan of the third kit. You’ve got to be playing a certain brand of football to be coming up with kits like that!”

You’re some of the most talented young players at one of the world’s biggest clubs – but how old were you when you first realised you had a special talent?

LM: You’d get offered contracts when you were still at school – that’s when you felt like people were really buying into you as a player, and that was happening to me when I was 11 or 12. I never really thought I was going to end up somewhere decent, in all honesty, I was just playing because I loved it. But then if you carry on playing well, you eventually get a chance to impress. When that happens, it’s all about taking your chance and I’m happy I did.

KS: I was banging in goals and doing absolute bits with my team when I was around 12-years-old and I could tell then I was probably on a different level to lots of the other kids I played with.

There’s a lot of excitement about young British players right now – why do you think there’s such an exciting generation breaking through?

LM: I just feel like we’ve got the support here to go and push on and achieve our dreams. Everything we could need here, we’ve got, and I feel that doesn’t just apply to City but lots of English clubs.

KS: This generation just loves the game, and I think there’s now a feeling we can make it to the top. There’s a lot of good young ballers about, and we’re all driving each other on. The facilities here are also incredible too, so we’ve got everything we need.

What does it mean to you guys to pull on a Manchester City shirt and rep the badge?

RM: It means a lot to me, and my family as well. Coming from a family who are all City fans, it means the world – it’s a dream come true for me.

LM: It’s the same with me. My family enjoy coming back to the club and seeing me grow up here.

FDB: It means a lot. Knowing that my family are so proud of me keeps me motivated.

KS: Playing for Manchester City is a really special feeling. It’s such a top club, so it feels amazing every time I step out and play for them.

This is PUMA’s first year in partnership with City – what do you think of the club’s kits for the new season? What’s your favourite one?

FDB: I love the Manchester influence on the kits. The away jersey is my favourite – I rate the Hacienda theme, even if it’s a bit before my time.

KS: Yeah the whole set is cold but I’m a big fan of the third kit. You’ve got to be playing a certain brand of football to be coming up with kits like that, which is what City have got, so I’m a big fan of that kit. I know a lot of the players are big fans of the away shirt too – they all rate the Hacienda vibes. 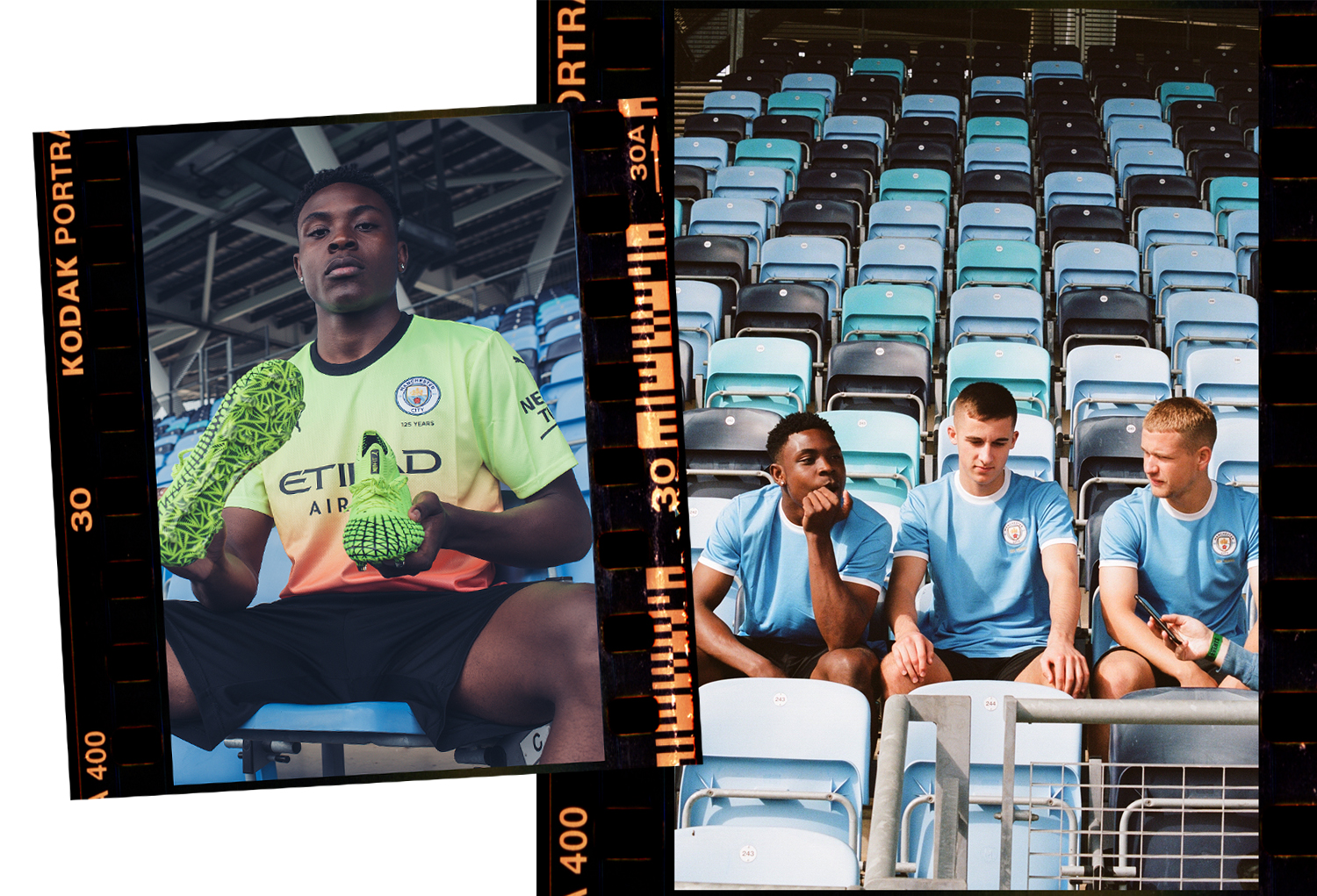 “Pep is the best manager in the world in my opinion. We know we’re at the right club to progress.”

Bugzy Malone helped to launch the club’s new kit – he’s a huge figure in the Manchester music scene – what sounds are you listening to on a match day?

RM: I’m more indie – I’m into The Courtneneers, Oasis obviously…all of that sort of stuff.

FDB: I’m all about my hip-hop, I love Roddy Ricch. In the UK, Aitch is that guy at the minute! I used to bump Bugzy a lot back in the day, but now I’m more onto new guys like Aitch. He’s sick.

KS: I’m a big fan of Bugzy and the Manchester scene at the minute. But I’m really into my US rap too. I’m a massive Playboi Carti fan – I’m always looking out for the new leaks on YouTube. Then stuff like Gunna, Lil Baby, Young Thug…the dressing room mixes it up though.

What’s been the sickest moment of your time at City so far?

RM: I’d probably say when we were Under 13s or 14s. There was a competition called The Floodlit Cup and we killed it that year.

KS: Training with the first team was crazy man! Everyone’s got to be focussed on what they’re doing – you’ve got to make sure you’re on it when Pep’s watching. I definitely have more of a mind to try a few more special tricks while he’s watching to catch his eye.

How much interaction have you been able to have with Pep so far?

LM: You step your game up a level when he’s watching. You can feel the expectations go up.

RM: He is the best manager in the world in my opinion. We know we’re at the right club to progress and eventually be managed by him. It makes me wanna work harder under his tutelage to fulfil my potential. 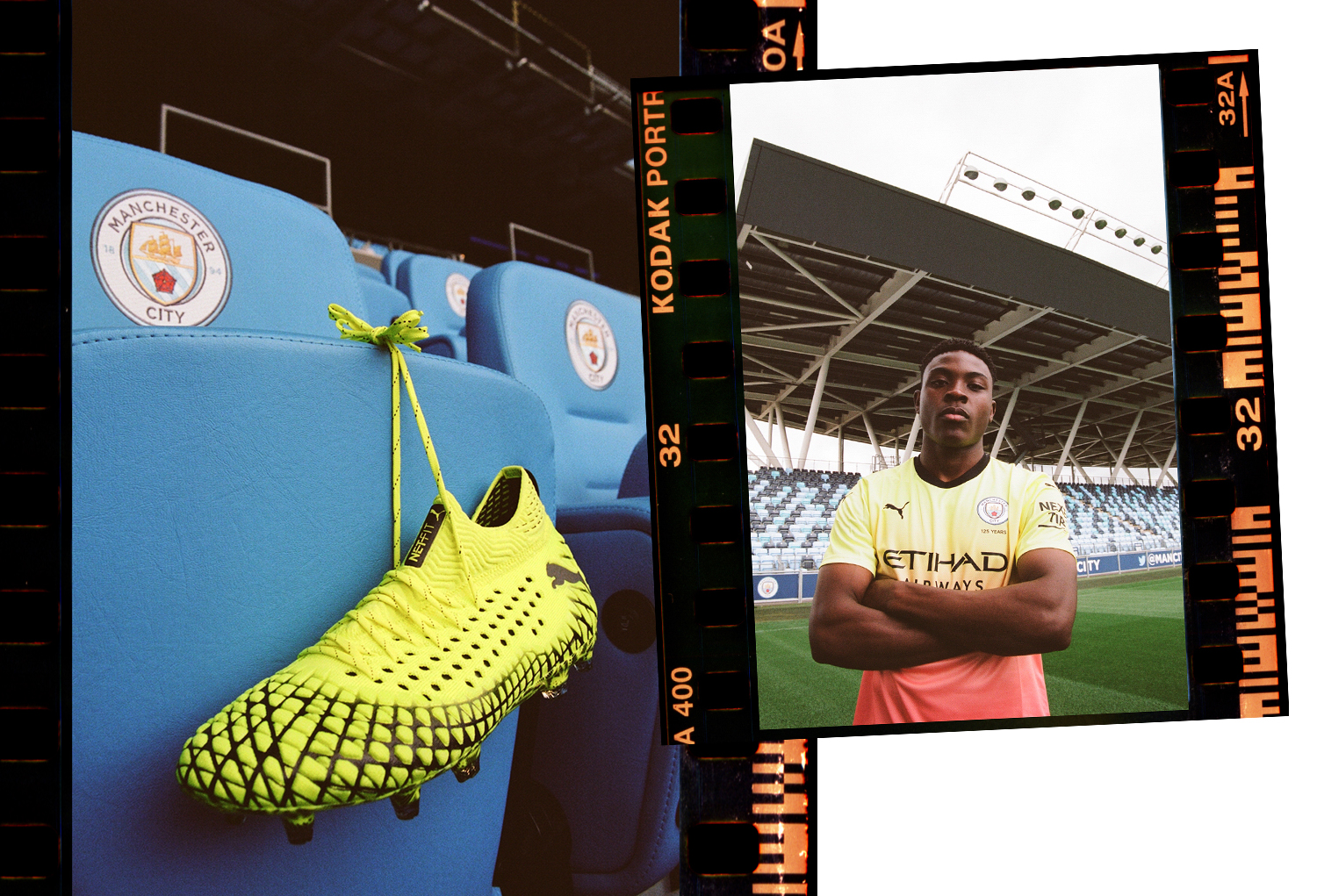 “Me and Sterling speak a fair bit. He’s such a good guy to look up to.”

The playing squad is obviously amazing too. Which players at City do you look up to and are you excited to play with and learn from?

RM: I quite like Fernandinho. He’s a big influence at the club, and plays a similar position to me. We’ve trained with the first team a few times now, and the vibe over there is great. Everyone’s on a mad high, and it’s inspiring to be around.

LM: Mine’s probably Ederson. He doesn’t speak the best English, but he’s probably the best in the business at the moment. Just to watch him train is mad inspiring for me.

FDB: I don’t really model my game on any of the first team players, but De Bruyne is a guy who I look up to a lot. He’s got mad tek.

KS: Me and Sterling speak a fair bit. He’s such a good guy to look up to. He’s always giving me advice and leading by example. He’s always telling me to do my own thing and express myself when I play. Everyone at the club knows how great a guy he is, and he’s obviously a top player as well.

How inspirational is it to know you could be working with Sterling in the first team one day?

KS: That’s mad. It would be so special to me. I look up to him a lot, so to one day play alongside him would be exciting. Hopefully one day I can achieve that.

Finally, with the new season properly underway, what are your ambitions for 2019/20?

RM: We’re hoping to go one step further in the FA Youth Cup this year and win it – we came so close last year, so that’s the main goal this time around.

LM: We’ve got the Youth Champions League and the Checkatrade Trophy, so they’re big goals. I’m also focussing on getting my first Premier League minutes too.

KS: I’d love to make my debut if possible. It’s gonna be a lot of hard work with all the other lads involved, but I’m just gonna get back from injury and keep working hard and hopefully take my chance when it comes.