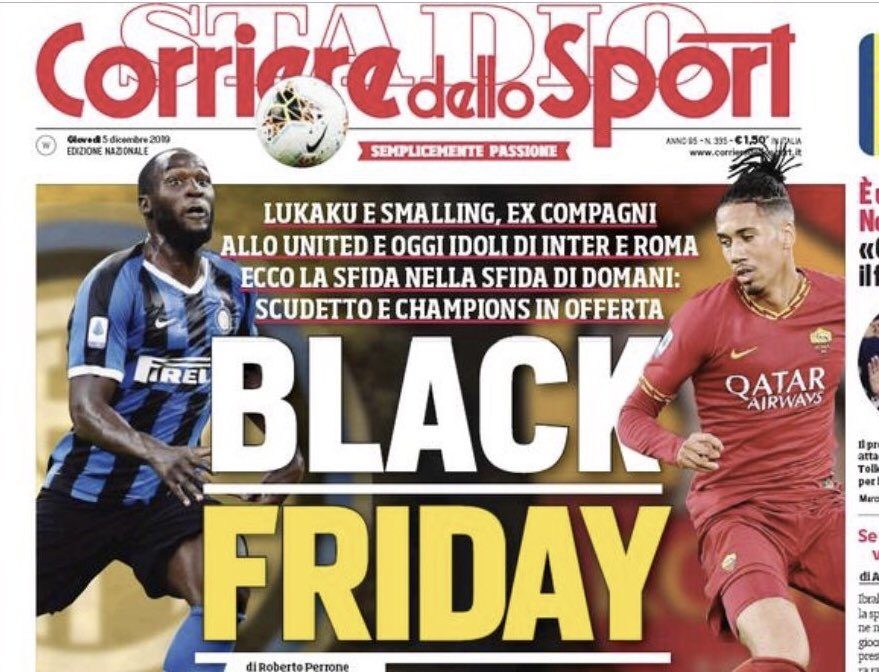 Italian daily paper Corriere dello Sport has been widely condemned for fuelling racism after running an inflammatory headline alongside pictures of Romelu Lukaku and Chris Smalling.

The paper ran the overtly racist ‘Black Friday’ headline alongside pictures of the Inter Milan and Roma players, with the two former Manchester United team-mates set to face each other in Friday’s Serie A meeting between the two teams

Above the headline, the paper wrote: “Lukaku and Smalling, former teammates at Manchester United and today idols at Inter and Roma, this is the battle within the battle tomorrow with the scudetto and a Champions League place at stake.”

The paper widely criticised, with Roma taking to social media to call the paper out for their overt racism: “No one. Absolutely no one. Not a single soul”, before the words “Corriere dello Sport headline writer” and a picture of the front page.

Not a single soul:

In the article the newspaper poorly attempted to highlight the league’s racism problem, saying: “In the faces of those idiots who boo, tomorrow everyone must instead go ‘oooh’ like children. It will be a Black Friday, but this is not an end-of-season sale,” before describing Lukaku and Smalling as “two giants of colour”.

The news comes after Serie A teams came together to write an open letter condemning racism in the league. Lukaku has been targeted by abuse this season, with Brescia forward Mario Balotelli also attempting to walk off the pitch following racist abuse he was subject to during a game for Brescia.

Anti-discrimination group Fare also called out the paper for the headline, Tweeting: “The media fuels racism every day. This is todays edition of Italian sport daily Corriere dello Sport.”

The media fuels racism every day.

Lukaku and Smalling have been two of Serie A’s best players this season for their respective sides, with Lukaku having scored 10 goals in 14 Serie A games with Inter top of the league and Smalling been a mainstay at the back for Roma having scored two goals and provided one assist and recently captaining the club against Istanbul Basaksehir in the Europa League.