PUMA have linked up with one of the most colourful and creative art collectives in the world right now – KidSuper Studios based in NYC – to drop an elite lifestyle and performance collection that combines the passion of football with the energy of art.

Founded by designer Colm Dillane, KidSuper Studios is a circle of creators transforming streetwear and accessories with fresh takes on style, art, music, and sport – all from their studio in Brooklyn, New York. Dillane himself is an ex-baller and moved to Brazil in search of becoming a pro, before playing at a high level for New York University.

It's this authentic connection to the game that makes KidSuper's debut collection with PUMA – including a limited-edition PUMA King boot to be worn by Hector Bellerin – such an exciting drop. The capsule stands out with retro tailoring, bold prints, vivid color combinations, and KidSuper's signature doodle aesthetics.

Key styles from the collection include a tailored jacket and pants, graphic t-shirts, jerseys, track jackets, sweatshirts, accessories, sneakers and more. His football inspired collection would not be complete without a PUMA x KidSuper Football Jersey, available in a brightly colored striped version with dove sketeching overlays and a more subtle, black striped version.

Poet & Vuj caught up with the KidSuper creator to get first-hand insight into his backstory, the inside story of working with PUMA, and how he made the waviest football-inspired collection of the year.

Watch Poet & Vuj's full interview with Colm Dillane on the player below, and get a closer look at the collection by scrolling down. The PUMA x KidSuper collection drops at Selfridges, PUMA stores and puma.com on September 17th.

Poet: You’re a master of your company. That means you care about every single detail and that’s such an advantage over bigger brands, because you smash big opportunities where they may get complacent…

Colm Dillane: And that thought process is actually something I brought to the PUMA collab. This was our first major PUMA collab so we went so much harder! They showed me everybody else’s collab and it looked like they didn’t care too much because it was their third or fourth design.

What you guys probably don’t know is PUMA give you two days to design your collection! I was like ‘guys, we’re not spending 10 minutes on a shoe!’ – this is our first time! We went back and designed for a month and sent them everything. PUMA actually have their own collaboration unit of ten designers, and often the PUMA designers actually present their stuff to the collab partner with their logo on it…but for us, we wanted as much control as possible and that’s why I think our collaboration is so special. We tried hard.

Poet: How difficult was the process for you? Was it difficult going into a new environment and creating or were you prepared?

We were so prepared! We had a 50-page deck. We knew we had to bring it. If you’re a real soccer fan, you know PUMA has worked with Pele, Maradona, Cruyff…all the greats! I mean we got our own PUMA King boot. There’s only a handful of people in the world who have ever had their own PUMA King! Pele, Maradona, McQueen and KidSuper. I told them I needed the King. I keep telling everybody that if you ever want to create with a brand that really allows you to do stuff, shout out PUMA, man. 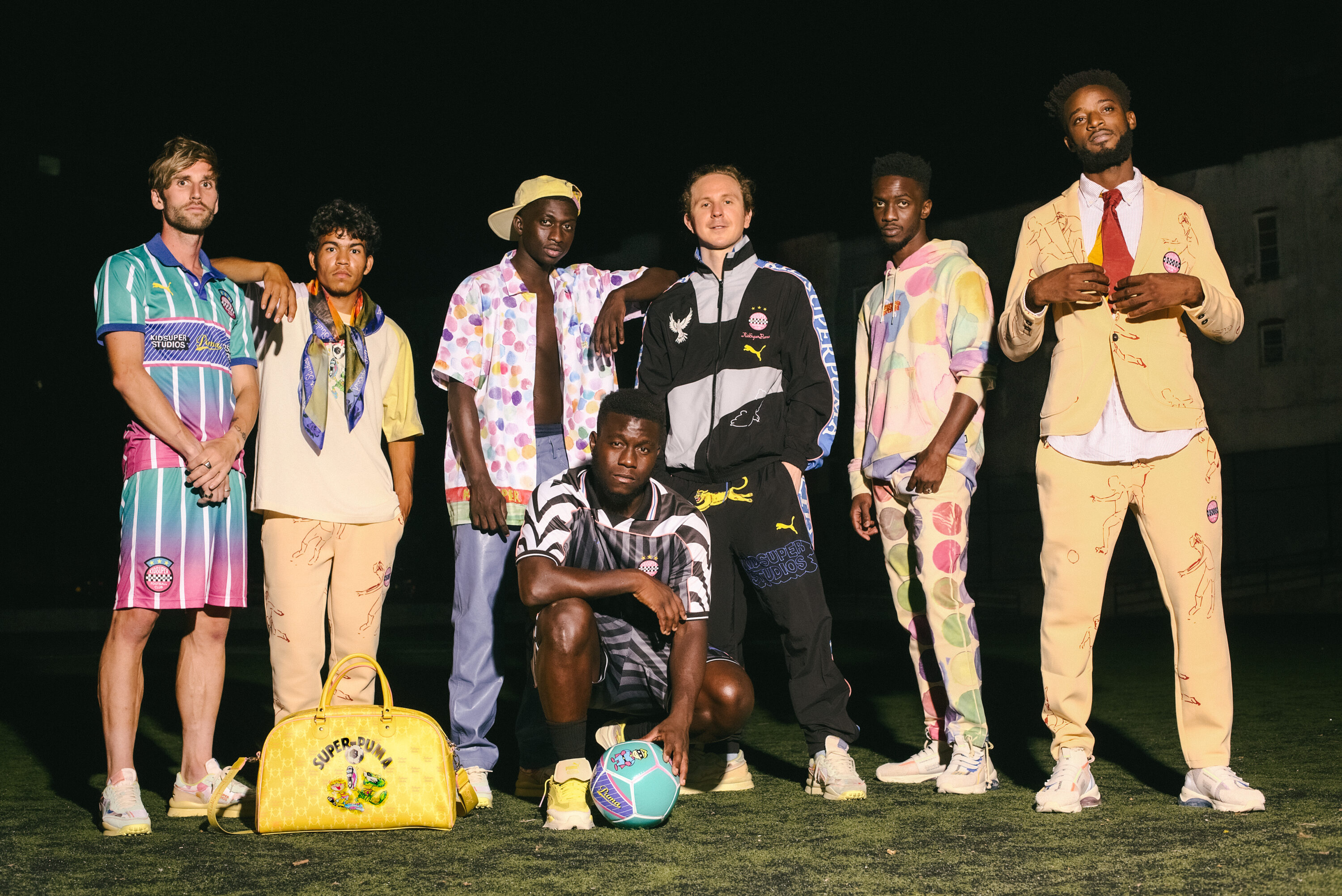 Vuj: I’ve seen the boot in training but I don’t think it’s been worn on-pitch yet. Show us the boot! Talk us through the design.

What’s fire is we have the KidSuper name in the PUMA formstrip, which is crazy. The PUMA King logo is on the side. We’ve got an embroidered dove near the toe – and if you know what Colm means in Gaelic, it means dove. We’ve got the KidSuper print on the insole, and the KidSuper FC logo on the bottom. The KidSuper logo is also on the tongue in the style of the King logo. Oh! My address is on the heel! And the KidSuper boy is there, too.

People always ask me what the best product I’ve ever made is, and it has to be these. I could have made shoes on my own but a PUMA King…that was one of those things I was shooting for and when they said yes, I couldn’t believe it.

Vuj: Living in New York, how did you first start getting into football? I know you played as well…

My dad is Irish and my mother is from Spain, and they both moved to America in their twenties. I grew up in NYC and what’s crazy is how big my country is – we’re like 50x bigger than where you guys are in the UK! There’s a lot more people playing soccer here than you probably think, but what’s different is we don’t have the academy mentality or infrastructure to develop players at 11 or 12 years-old.

I grew up playing soccer and it was the only sport I played. I played it with other people who had immigrated to America – New York is the number one city for immigrants – and on my soccer team, everyone was from a different place in the world. When I was 17, I had a Brazilian coach, and he asked me if I wanted to go to Brazil for a year to try and play professionally. I spent a year down there, trying out for first division Brazilian clubs, and had already gotten into New York University where I could play, so I had a 12-month existential crisis where I had to decide if I was going to be a soccer player in Brazil or go home and study. Then I started losing focus and playing bad because my head was in all different places…it was a great experience but super hard. In soccer, when you’re an American going somewhere else they instantly think you suck. You have to be 100x better for them to accept you. It was a lot of pressure, so I tried college back home and started playing soccer again there. 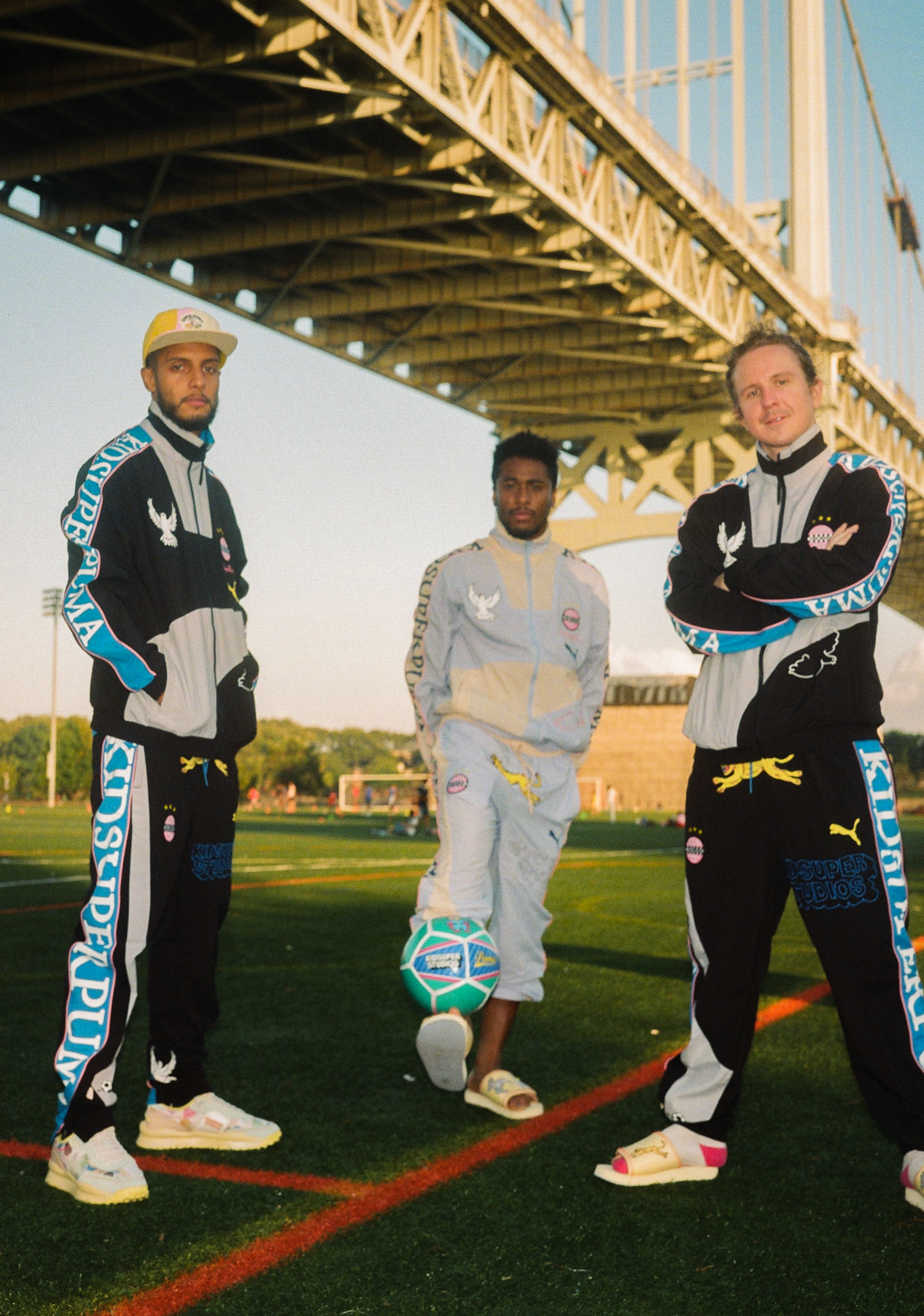 Vuj: You obviously ended up choosing the fashion and design route…

I was already making clothes in high school, so when I went to Brazil for a year I was designing clothes in my off time. Professional soccer is like 90% off time – people think it’s difficult but you play in the morning, you play in the afternoon, and then you’re free! This is why players are doing other things now, because you’ve got to pick up something! So yeah I was designing in clothes in Brazil the whole time and when I landed back in America, I had all these clothes I designed. I’d built a website and stuff like this, so I was always exploring my passions.

Vuj: Hector Bellerin is going to be wearing your boots and I feel like he fits the KidSuper mission really well. Are you happy with him wearing it?

I think having any soccer player wearing it is incredible, but someone like Hector Bellerin who is one of the top players but also the fashion god of soccer…it’s cool! When I was with him – I’m such a soccer fan – all I wanted to do was ask him about other players and his experiences! What’s cool about Hector is he’s also thinking big outside of soccer, so he’s as interested in fashion as I am in soccer. It was very cool to talk. 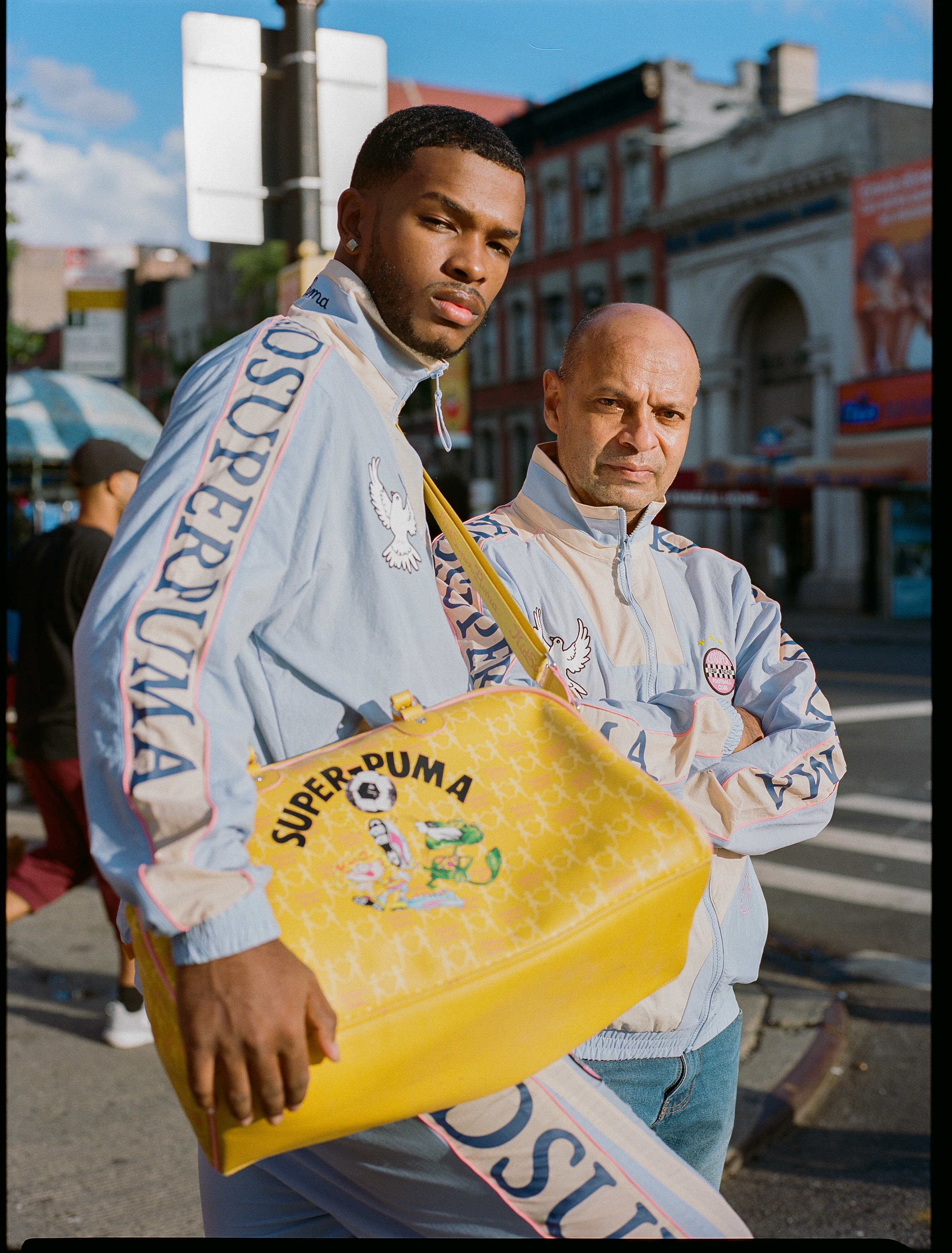 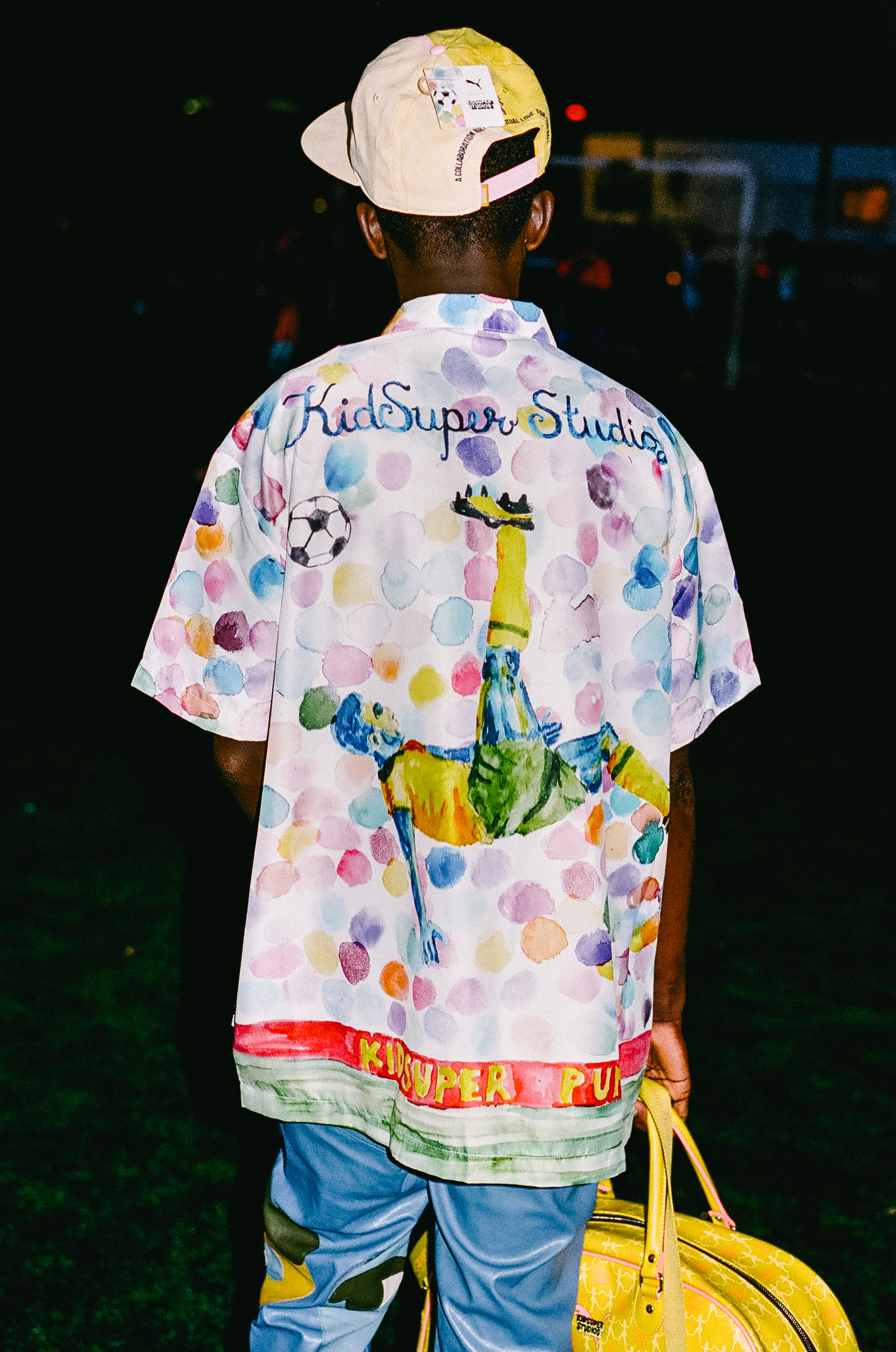 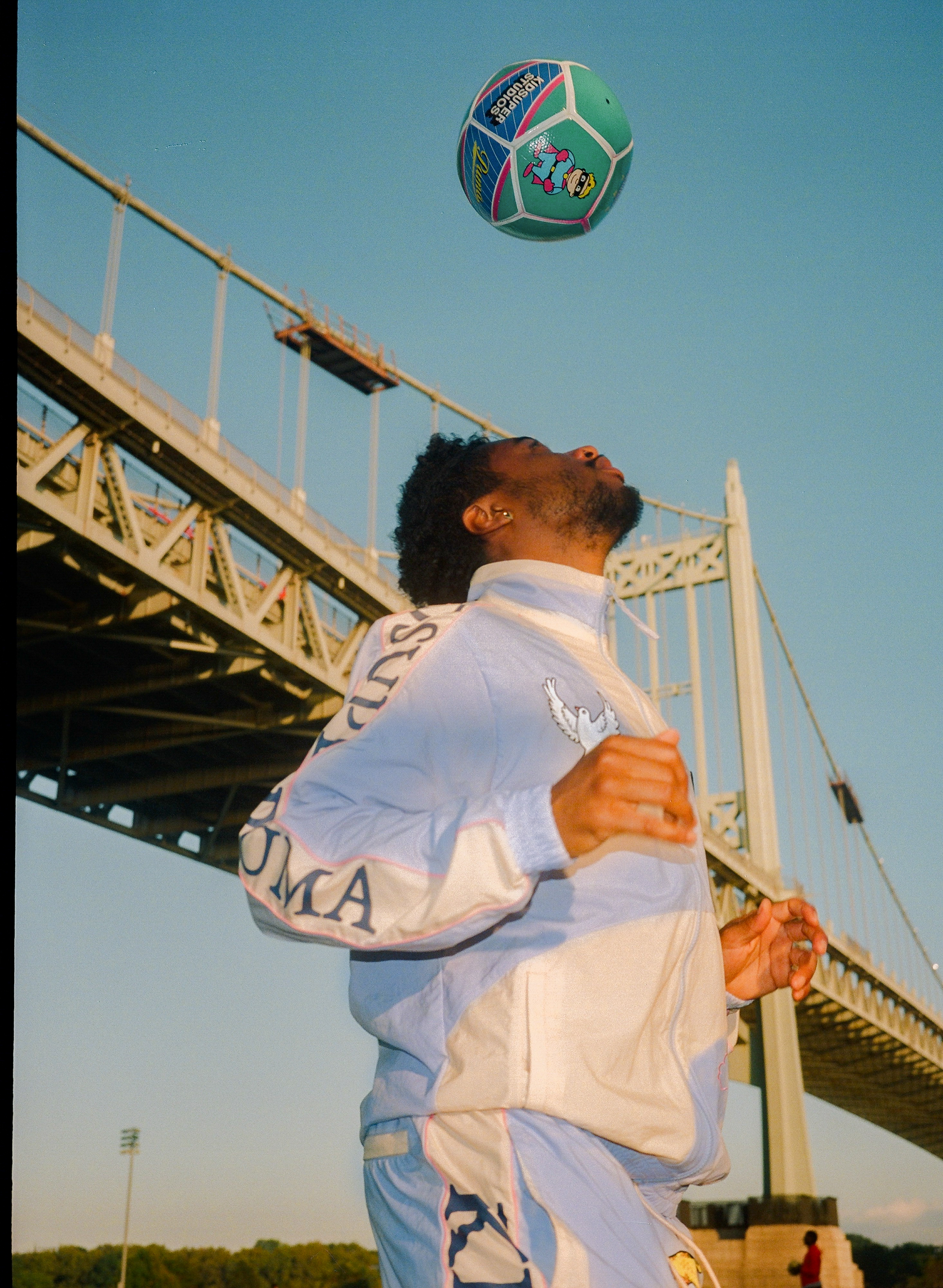 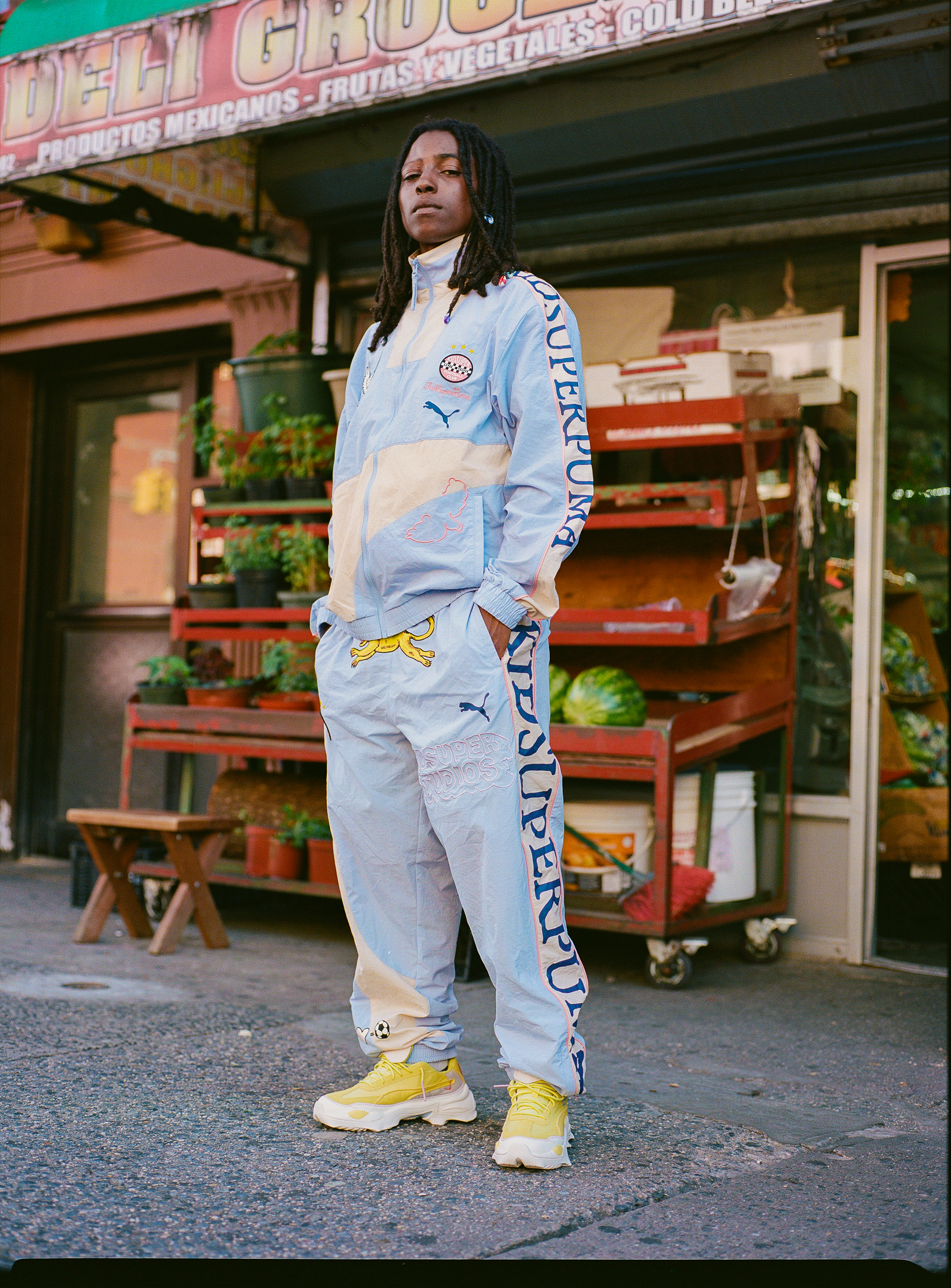