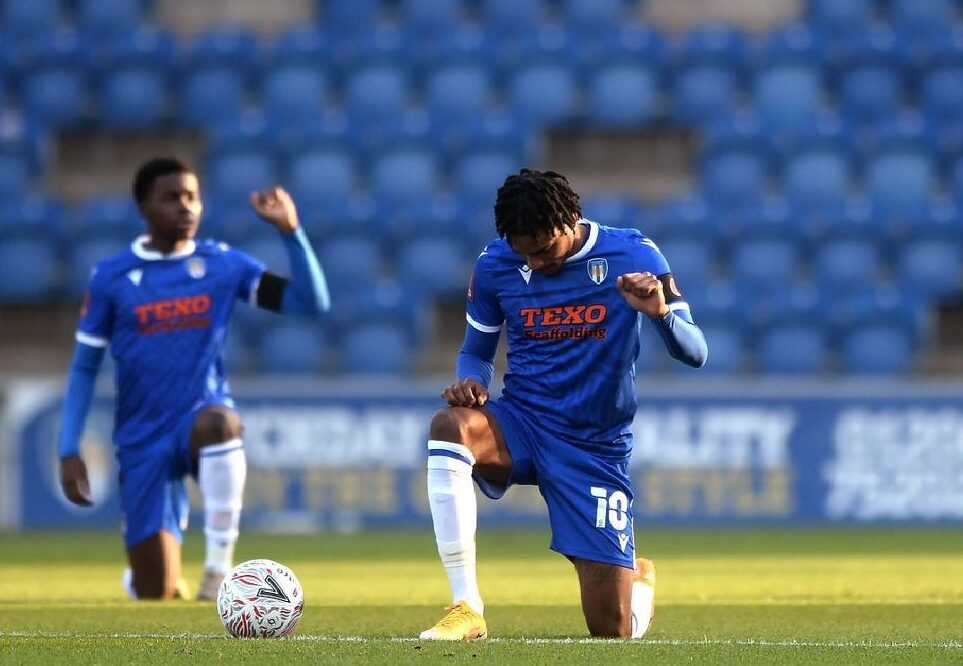 Colchester United owner and chairman Robbie Cowling has said that fans deciding to boo players taking the knee in support of Black Lives Matter can “stay away from the club” and get a full refund for their season ticket.

Colchester United’s weekend game against Grimsby saw the U’s win to claim seventeen points from their last nine league games,but the contest with marred by the actions of supporters who decided to boo our players whilst they took the knee before kick- off.

Now, Cowling has released a very well put statement, saying that any fans who decide to boo the gesture of taking the knee can take their support elsewhere.

Releasing a statement on the club’s website, Cowling wrote a brilliant, explanatory piece outlining the club’s stance on the matter. Make sure to read it in full below.

“Our club supports the players and their choice to take the knee for a few seconds before every game.

Callum Harriot described the purpose of the gesture perfectly to me explaining that taking the knee dates back to early civil rights movements as a way of silently showing solidarity in support of political inequalities suffered by oppressed communities.

Those that take the knee want to highlight that all lives should be valued and should not be treated inhumanely or inferior to others just because of their race.

It is undeniable that black and other ethnic minority people are still the victims of racism, and the black footballers and staff at Colchester United feel that they are in a position of privilege that has been fought for through the blood and sweat of their ancestors.

Those taking the knee, and supporting the taking of the knee, not only shows their willingness to support the drive to eradicate racial oppression but force it to be a talking point even when it’s uncomfortable.

Undeniably, taking the knee is a fundamental catalyst in pushing the conversation and thus the necessary changes forward. I’m sure the vast majority of Colchester United fans are supportive and want to play their part in showing they back the actions of our players.

Maybe those that booed on Saturday might now understand what this gesture means to our club and will at the very least remain silent during future games whilst the players continue to take the knee before each kick-off.

Alternatively, they should just stay away from our club because anyone that still wants to boo now that I have explained the purpose and importance of the taking of the knee is not welcome at our club.

I will be happy to refund anyone for the remaining value of their season permit if that is the reason they feel they can no longer attend our games.

It would be very disappointing if anyone does decide to boo again. Therefore, going forward I would like to make the actions of those fans who do boo the taking of the knee completely irrelevant.

For every game where the players choose to take the knee, I would like all of our fans to join me in applauding this gesture to ensure our players know we fully support them.”