Kim Little. Once a Gunner, always a Gunner.

The Scotland star originally joined the Reds at the tender age of 17 back in 2008 for five incredible years (which included her becoming the first ever recipient of the PFA Women’s Player of the Year Award) before returning in 2017. She scored her first goal for Arsenal in a memorable 4-1 win over Chelsea in front of 5,000 fans at the Emirates back in 2008, and she’ll be hoping history repeats itself this Sunday in the latest chapter of a historic rivalry between the two clubs.

The legendary Vic Akers once told reporters: “Make a note of this kid, she’s going to be a big player” and of course he wasn’t wrong. 44 WSL goals for Arsenal. 3 WSL titles. 3 FA Cups. 4 Continental Cups. Little by name, big winner by nature.

The Midfield Maestro’s game doesn’t need talk when she walks the walk every single game day. Cool, calm and collected on and off the pitch, Little is one of Arsenal WFC’s true greats.

But her story isn’t over yet. Ahead of the biggest WSL season of all time, AWFC captain Kim Little tells us why the best is yet to come. 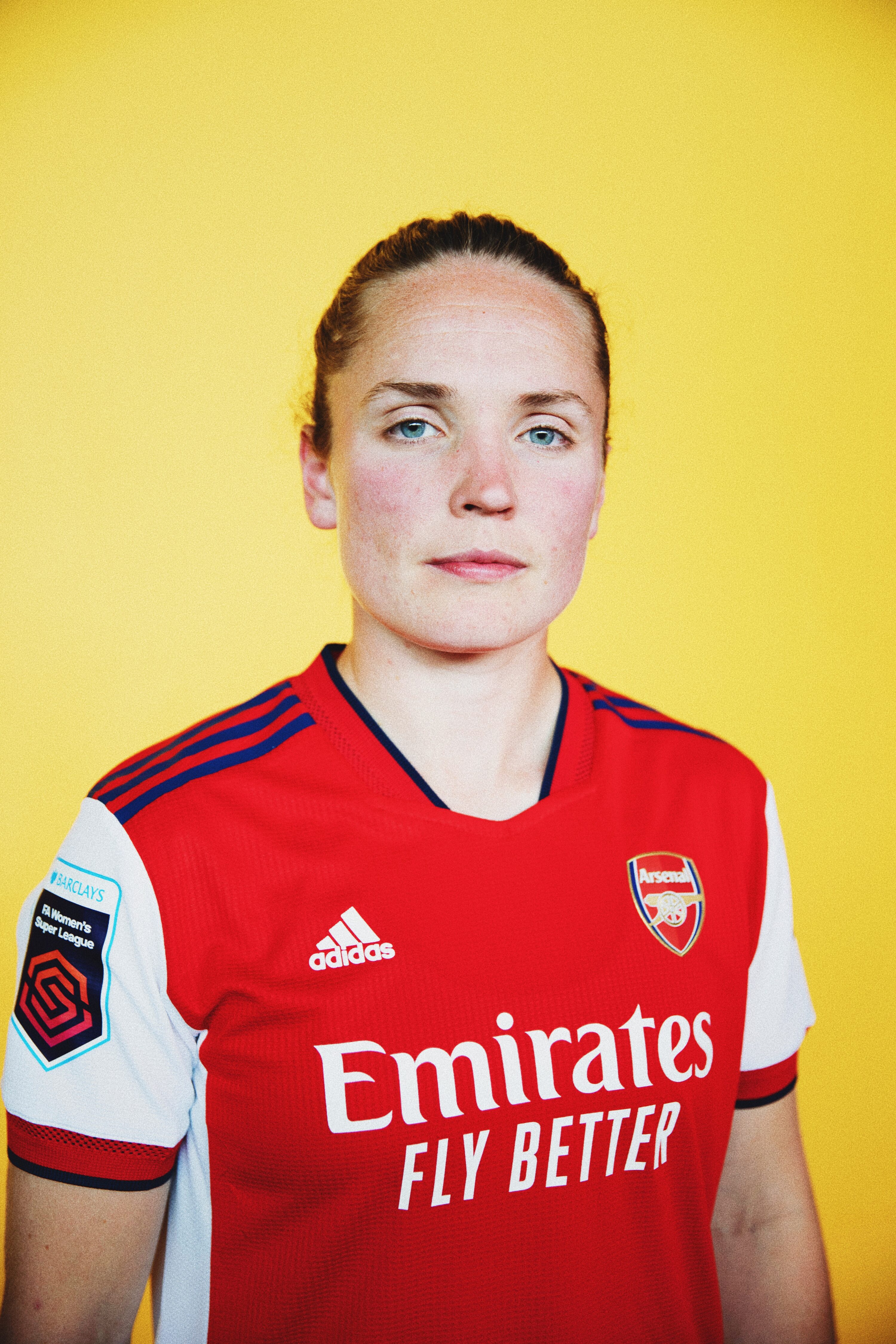 VERSUS: You are the captain, and you have been for a long time. Does it take a certain type of person to captain an Arsenal team?

Kim Little: Yeah, I think so! I came back to the club in 2017 from America, and Alex (Scott) was the captain at the time, but when she retired the following year I was asked if I wanted the armband as one of the club’s most senior players. It was a great privilege to be asked.

I think as you get older, you take on more responsibility leadership-wise because you can use your experiences to help players and the team to develop. It was a little bit challenging initially because my personality is quite a quiet and introverted one. So, to use that in a positive way – but to also still be able to keep yourself, to yourself – it’s been a journey. It’s been amazing to be the leader of this team, one that’s made up of so many great girls, it makes me excited for the season to start.

Learning to use your personality to manage the group of players you work with is challenging for anyone I’d imagine. But for someone like yourself, you do most of your talking on the pitch anyway!

I have always tried to lead by example with the standards that I set in training and on the pitch. That’s always been how I’ve wanted to do things.

With any team, you need different types of people and personalities and that’s what I’ve always brought to the team. We’ve got some players who are more outgoing and motivational in that sense, but on the whole we have a nice balance and it’s all about people finding their own way and style of leading themselves and others. 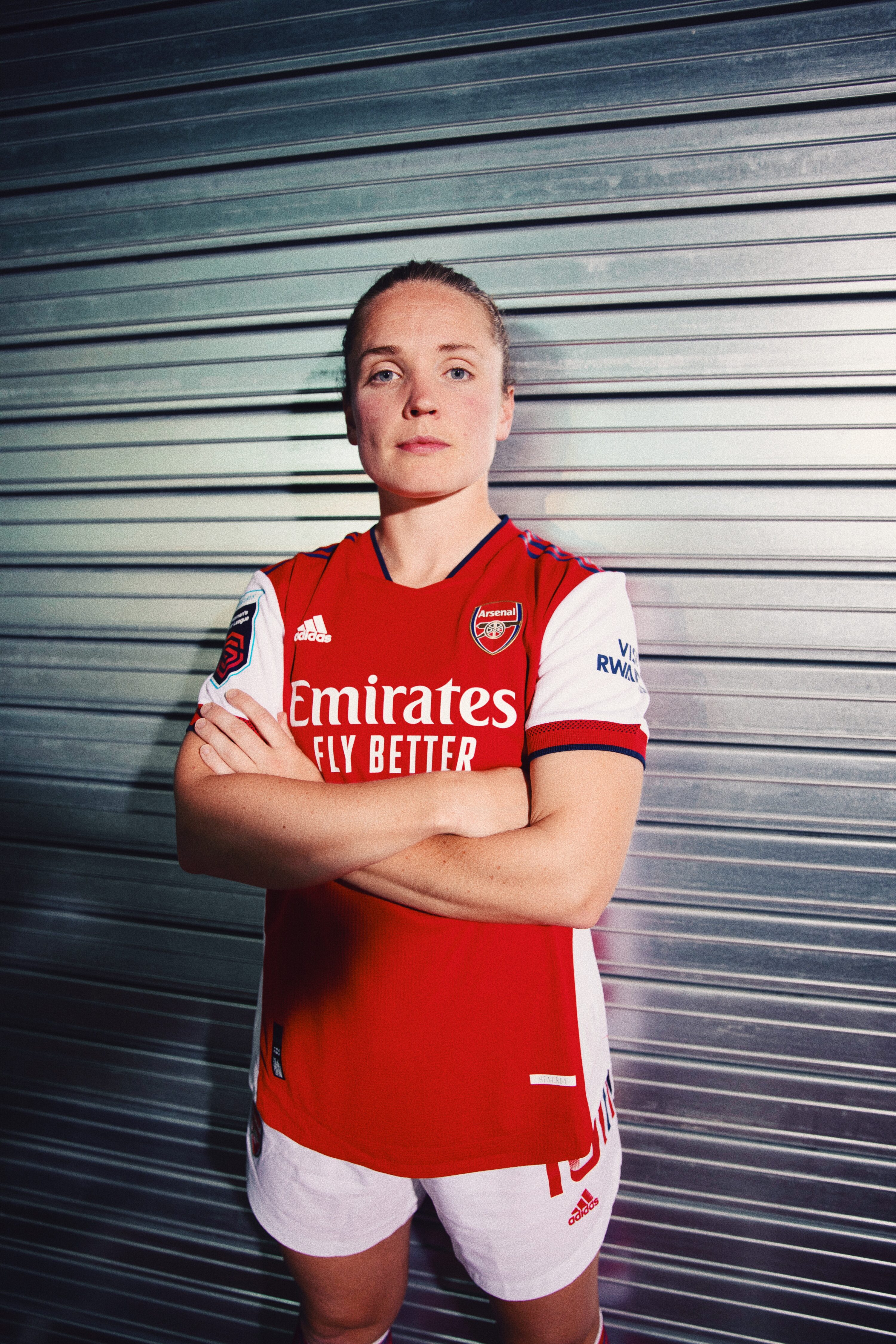 “As a player you come to Arsenal wanting to play entertaining, free-flowing football. Players love that identity.”

Do you think it takes a certain type of mentality to be an Arsenal player?

When people think of Arsenal they know it as a club that has had a lot of success, and as a player you come wanting to play entertaining, free-flowing football. That’s why I love being a part of this club, I think we have that identity and that’s what players love about it.

Lotte (Wubben-Moy) spoke so openly and candidly about how important that sense of identity is for an Arsenal player. Clubs can recruit brilliantly and sign some of the best talent in the world, but that doesn’t necessarily mean you have the best team. And to have that strong sense of identity, that common goal or shared ethos, I think is very ‘Arsenal’.

At Arsenal we’ve also got a lot of younger players like Leah (Williamson), Anna (Patten) and Lotte who literally grew up and came through the ranks at Arsenal.

I was actually talking to them recently about when they were ball girls at the games I played at when I was 18! You also have ‘that’ identity you know? Arsenal is just ‘in them’, but then you’ve got the identities of European and international players who bring their own values and outlooks to the team. It’s a nice combination to have.

You’ve mentioned how young you were when you came to the club. You travelled from one end of the country to the other at 17 to be the best possible player you could be. You’ve won so many titles across your two stints with Arsenal. How do you keep striving, and pushing yourself for perfection?

I think it’s just in me, I don’t think I’ll ever not be ‘that’ person.

I’m 31 now, I’m obviously a little bit older! But I still have that drive, that internal drive and motivation to just win and work for my teammates. That’s something I put into every session, it’s just ‘there’. And it’s now pretty habitual and autonomous. It is something that just stays with you over time.

Definitely. I’ve played a lot of football from a young age, and the way the game has developed, it is quite different now.

Players come in a little bit older, but when I was younger, the game wasn’t professional but that also meant I got opportunities at a really young age. I played a lot of international and club football from the ages of 16-17 which taught me standards, and the more you do that, the more natural it becomes. 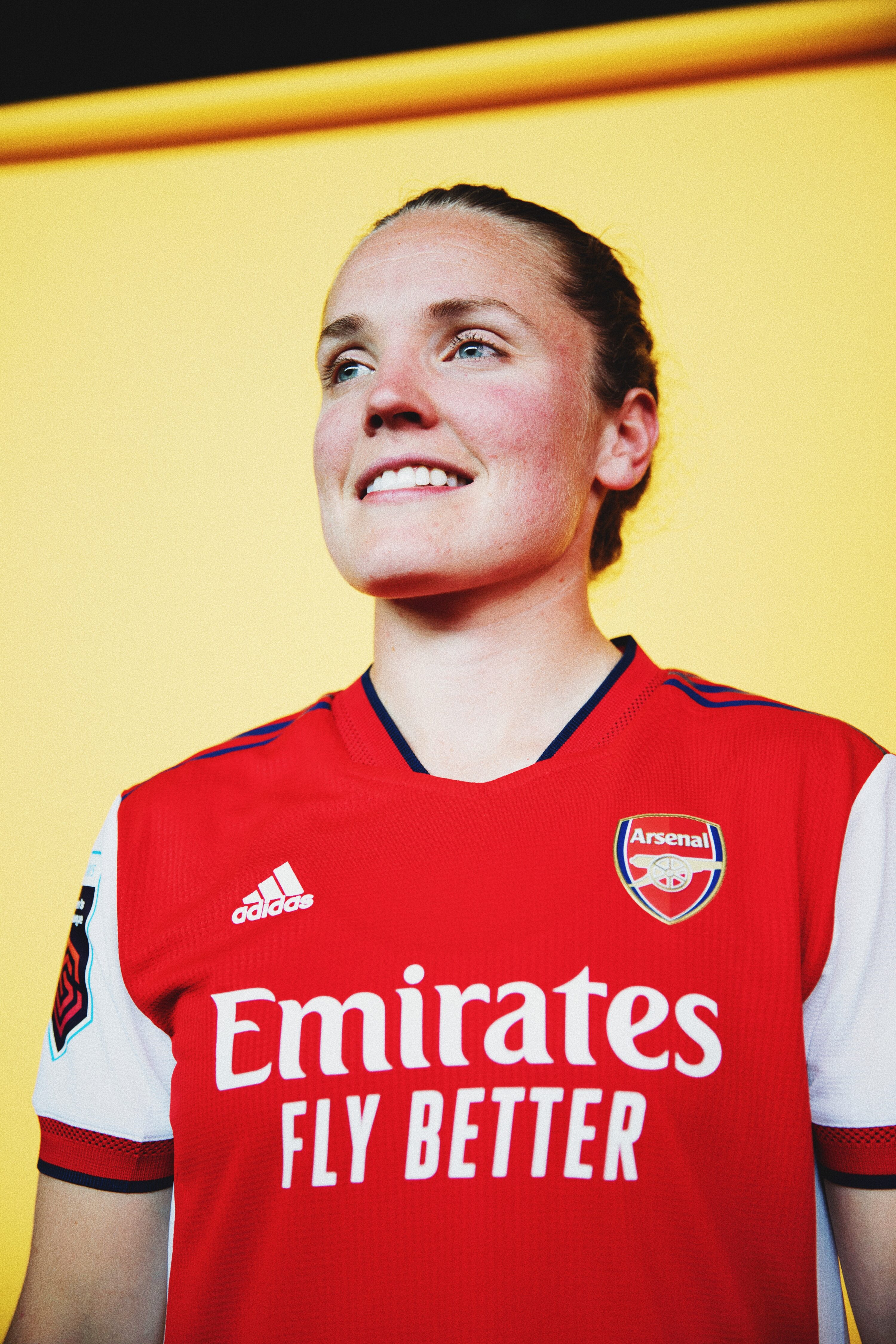 “We used to play one game a year at the Emirates when I first signed for the Club, so it’s definitely fun to go back and play Chelsea there again!”

The only thing I think is missing from your trophy cabinet is the Champions League title. This season?

Why not! We’ve done really well these first two qualifying games, and our next two games against Prague will hopefully qualify us for the new format. Something I find really exciting actually.

I’ve played in the Champions League since I was 17, and the format was so different then. We would play group games in the space of seven days, where you’d hope to qualify and play in the knockouts. Whereas now, it’s changing to a format which is more in-line with the men’s game, which obviously allows you to qualify for more games against the elite teams.

It’s great as a player, and I hope that all the younger players get to experience it too, that way they really get to experience what European football ‘feels’ like. I think it’s also great for the game in general to have high quality games where you’ve got different European clubs playing each other repetitively up until Christmas and beyond. It’ll help to bring a different element to the women’s game, which I think isn’t quite there yet.

How are you feeling about playing at the Emirates twice this season? You scored your first goal for Arsenal against Chelsea in a 4-1 win at the North London ground…

We used to play one game a year at the Emirates when I first signed for the Club, so it’s definitely fun to go back and play Chelsea there again! 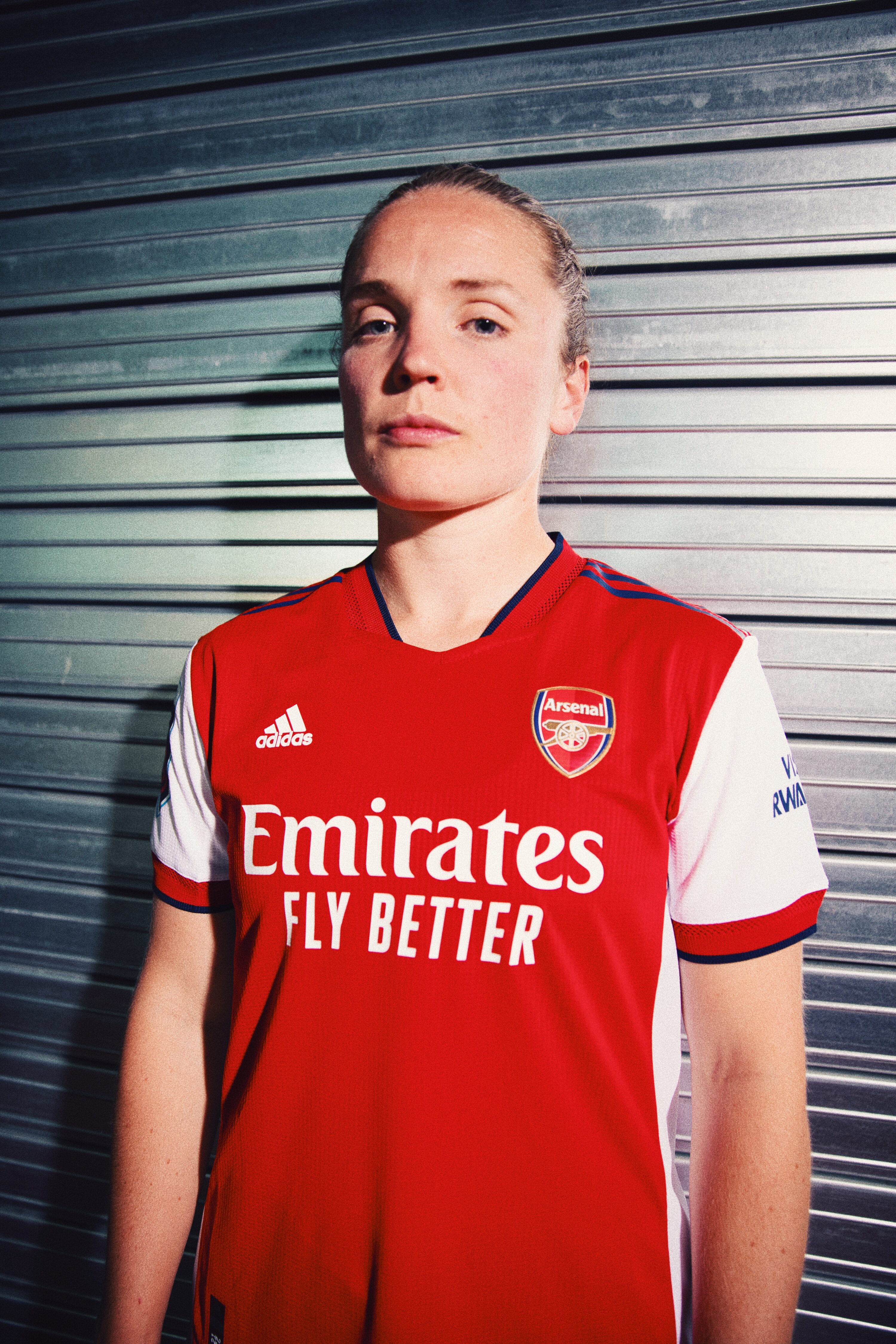 “There has been slow, gradual progress over a long period of time but now it feels like the game is becoming professional in so many ways.”

Are we going to get a repeat of that 4-1 victory?

That’d be great wouldn’t it!

To play Chelsea in our first game of the season, it’ll be a tough, tough game. It’ll be great to have a game like that on Sky and to play it at the Emirates, though. Hopefully it’ll be a great showcase for women’s football.

You’ve spoken about your football journey, and how you’ve been in the game for a long time now. You’ve seen a lot of changes over the years, and it does at times feel as if the women’s game – and all that comes with it – signifies progress is being made. New broadcasters, new competition formats, both add another level of professionalism to the game. What are your hopes for the future of women’s football?

I think that’s it, we’ve seen the progress gradually be made over the last ten years or so, but there’s always been that feeling of ‘one more step’ needs to be made.

Whether it’s resources, clubs, media, TV rights, the steps that have been made in the past potentially haven’t been made with purpose or enough quality. Whereas now, it really feels like brands, clubs, broadcasters are all taking a big step and really trying to make the women’s game a ‘real product’. One where they try to really engage fans and young players, which is great.

There has been slow, gradual progress over a long period of time but now it feels like the game is becoming professional in so many ways. Surely you must feel that too working in the media?

I grew up never really knowing that I could work in football to be honest. I didn’t ever see female journalists on my TV, so I just assumed I couldn’t do ‘that’. I’ve had to freelance as a writer alongside working full-time in completely different industries for years. But I do agree with you, now does feel like a really exciting time in women’s football.

I guess that is the slightly ‘detached side’ of it, but those journalists who have invested in the women’s game and by doing that well, exposed people like yourself to it which is another part of the journey.

I guess it is similar to ‘proof of concept theory’, right? But the difference being, we’ve just been trying to prove the concept for decades! And people have finally realised what it’s all about, and can see that women’s football is a viable product to invest in.

It’s great that you can see that too! And that people have realised this instead of doing things for the sake of doing them.

Do you feel as if there is a feeling of ‘New Beginnings’ at Arsenal this season?

For us, it naturally feels that way because we have a new manager who definitely brings that sense of a new beginning.

There are always changes at the start of a new season, whether they’re managerial or player centred. We’ve got our identity as Arsenal Women, but Jonas (Eidevall) has got slightly different philosophies and a different way of working. He’s experienced a different culture – he’s Swedish – which is different to Joe’s (Montemurro). We are working on a lot of different things and it is exciting, it’ll be good for people to watch! I hope we can perform, and be our best this season.