The VERSUS Hall of Game is our celebration of the most influential and impactful ballers of our time. From Ballon d'Or winners to 'Streets Won't Forget' hitters, we're here to give thanks to the players who made us fall in love with the beautiful game. Next up, Mayowa Quadri drops a tribute to one of the greatest African PL players of all-time, Didier Drogba.

Chelsea is a club that represents Premier League royalty. Whether our haters like it or not, the blue flag flies high as one of the biggest and best clubs this country has ever seen. Despite the sporadic drops from grace which happen to fall hand in hand with a changing of guard, we always return to the top of the summit. It’s part of the DNA.

A part of that special DNA and true royalty that can never be removed from history is the influence of the King. Didier Drogba. Born in Abidjan, developed in France, conquered England and reigned in Europe. When Burna Boy was talking about African Giants, he was talking about people of Drog’s stature. 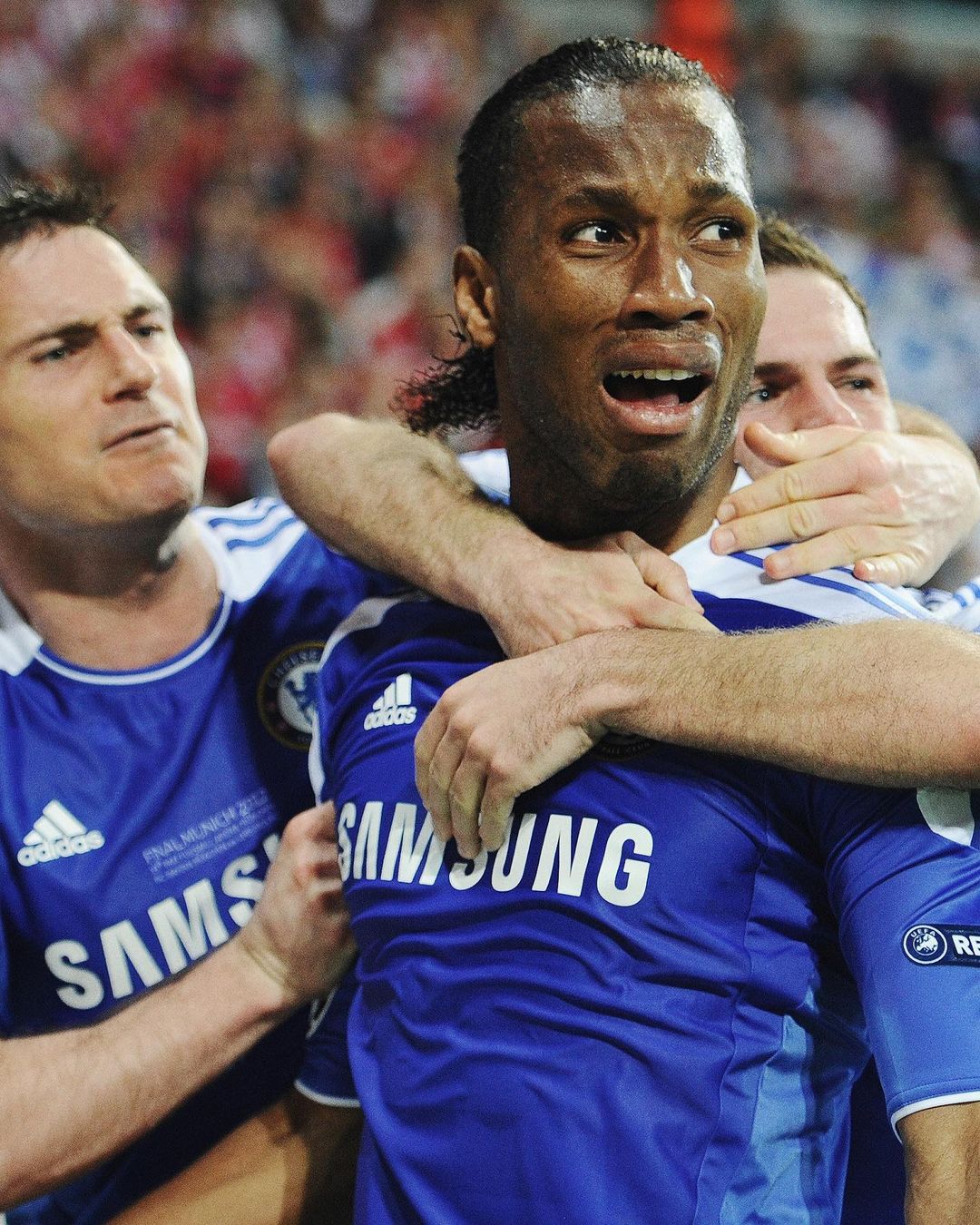 I probably have a strong affinity with him because he represented so much to me on a personal level. During a period where African greatness fuelled Chelsea’s ascendancy with names such as Michael Essien and Claude Makélélé in midfield, Drogba was putting the continent on the map. His two African Player of the Year Awards cemented that.

He was never afraid to represent himself to the fullest on a football pitch. From dancing in celebration at another cup final dub or displaying the highest camaraderie with fellow teammates, he wore his heart on his sleeve. And what he achieved during his time at the Bridge was nothing short of historic.

For someone who was a right back at youth level and only became a professional at the age of 21, Drogba was leagues ahead of where he should have been. Big Didier arrived in the Premier League and changed the way we saw football. After a season of adaptation in which he formed a partnership with Eidur Gudjohnsen, Drogba became the standard bearer of single-striker systems. Football heritage of two strikers disappeared overnight as DD showed you could do it all in one.

Hold up play? Yep. Link up play? Check. Clinical finishing? Completed it. A total forward who could also assist those around him. Thanks to his ability as a lone frontman, we started seeing the introduction of chaotic wingers and nothing has been the same since. It is no exaggeration to say Drogba was so good he influenced the game as it’s played right now.

In 2004/05, Jose implemented the ‘Christmas Tree’ formation and Drogba was giving Chelsea fans gifts. The iconic knee slide with his slick hair was something I tried many times with some of my mum’s wigs in our hallway – and it was a thing of beauty many fans had to endure as Chelsea would dominate the league for the next two seasons.

For anyone who dares to doubt this man’s greatness, let’s get some things straight. This is the first African to join the illustrious PL 100 Club, a recipient of two Golden Boots and a four-time Premier League champion. 12 trophies for my number 11 during his two spells at my club. If that is not enough for you to pay respect, then respect his 10 goals in 10 cup finals. Dunking on opposition in high pressure moments. The ultimate big game player. The final boss. Drogba didn’t just rise to occasions, he owned them.

Chelsea’s Champions League victory probably summarises this fact and his tenure at the club more than any other moment. There will be downs, but we will forever be up. Conceded a foul that led to Bayern’s pen but coolly tucked away a header close to the death and converted the winning pen. Ever dependable and ever present (unless he was off at AFCON putting Cote d’Ivoire on his back).

Which is probably the perfect segway to his greatest season in the Barclays. 29 goals in 09/10 with only 32 games played. If not for his trip to AFCON in January, my GOAT would have gone clear with the most goals scored in a 38-game Premier League season. No agendas, just facts.

And that’s part of the reason why this baller is so special to me. His influence. On and off the field of play. He became the blueprint for current Chelsea striker Romelu Lukaku. He showed you could be a top striker in the world without scoring 20 goals every season because you offer in other areas. He showed delay is not denial in his rise to the top of the game.

He also showed that football was important but it can be a platform to do so much more. He’s a hero on and off the pitch for his country, using his position as a national hero to successfully call for a ceasefire in the Cote d’Ivoire civil war, minutes after qualifying for the 2006 World Cup. He issued an address live from the changing room asking both sides to lay down their arms. There are no words big enough that describe my respect for this man.

Some may have not liked him originally but by the time he left, there were no doubters. The definition of ‘The People’s Baller’. And that’s why King Didier has to enter the Hall of Game with the same amount of grace and gusto as his goal against Everton, where he chested the ball and smacked it in on the volley from near the halfway line. Undeniable. Welcome to VERSUS folklore, DD.