In ‘What Ballers Wear’, we link up with the most exciting players in the women's game and catch a vibe with them while they dive into their wardrobes before flexing their coldest fits. In our penultimate instalment, we meet up with Manchester’s finest: Ella Toone.

Every now and then, you watch a footballer and think: they were born to play the ‘beautiful game’. That's Ella Toone.

A product of Manchester United’s Academy, the born and bred Red has been moving devilishly since turning pro, having already made a name for herself as one of the deadliest players in front of goal.

Back in 2018, Toone netted 15 times in 19 starts across all competitions for United - helping her childhood club win the FA Women’s Championship title in the process. She then finished last season as her side’s top scorer and was rewarded for another stellar season by earning her first senior England cap, scoring a pen in a 6-0 friendly over Northern Ireland. Keeping on fine form for both club and country, Toone netted a hat trick against Latvia back in October and ended the 2021/22 season as United’s first and only women’s player to join the Centurion Club.

Despite already being United’s all-time top scorer, Toone is still at the beginning of her career, but carries herself with an unparalleled level of self-assurance. She knows who she is, and what she wants to achieve. And a huge part of that is giving back to the game that made her. After her link-up with VERSUS, Toone shot off to surprise Bloomsbury Football participants at one of their weekly training sessions. The 2021/22 PFA Community Champion seems to always make time for those wanting to follow in her footsteps. Search ‘Ella Toone’ on Twitter and your timeline will be full of messages from her to young fans who idolise the latest player to wear United’s iconic No.7 shirt. At just 22-years-old, she’s already embracing her role model status. Some might buckle under the pressure, but 'Tooney' relishes it, and that really comes across in her demeanour. Composed, considered and genuinely interested in what it is others have to say.

VERSUS sat down with the Tigress from Tyldesley for our latest instalment of ‘What Ballers Wear’ to find out what role she thinks fashion plays in football, how she defines her own sense of style and who are the players setting trends with their fits. 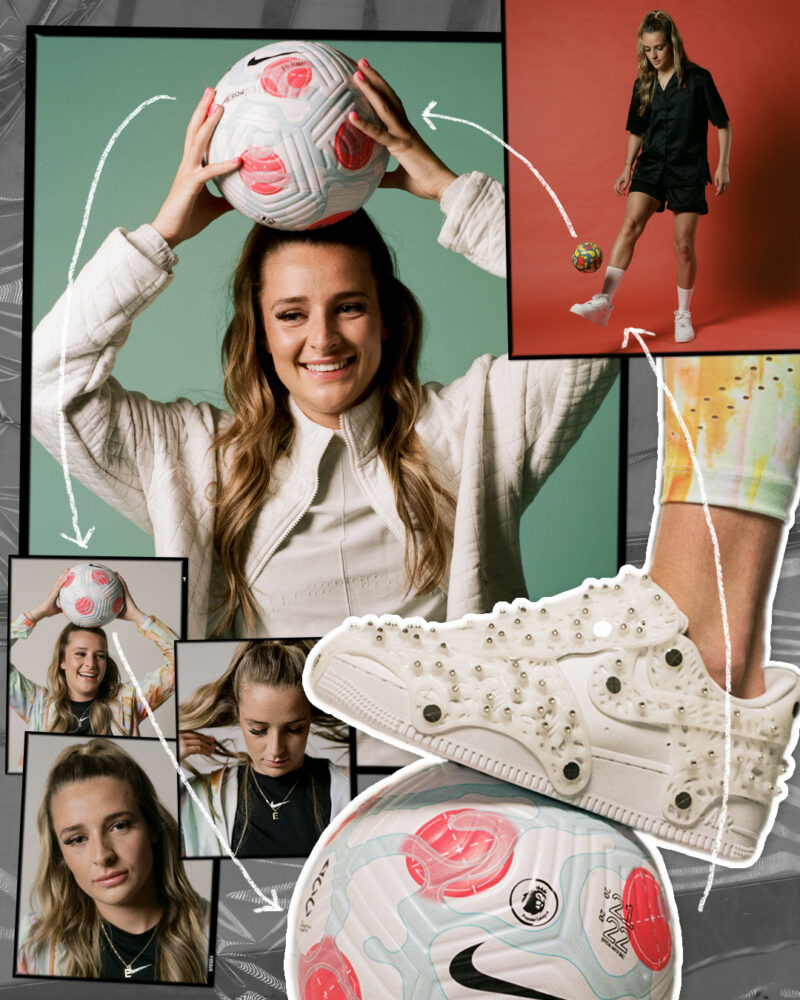 Toone’s eyes lit up as soon as she set them on the Swarovski x Nike AF1 encrusted kicks for the first time. “They’re incredible in real life! Don’t ask me to do any kick-ups though! That’s definitely not happening whilst wearing those.” Instead she dons the Air Max Terrascape 90s to show off her tekky skills. We’ve never seen a player attempt keepie-uppies with a lime before, let alone have someone completely smash it out of the park. “I think I can do an ‘around the world’…let’s give it a go!”

“For me, expressing myself on the pitch is easy. It just comes so naturally to me. When I’m on the ball, I’m confident.” 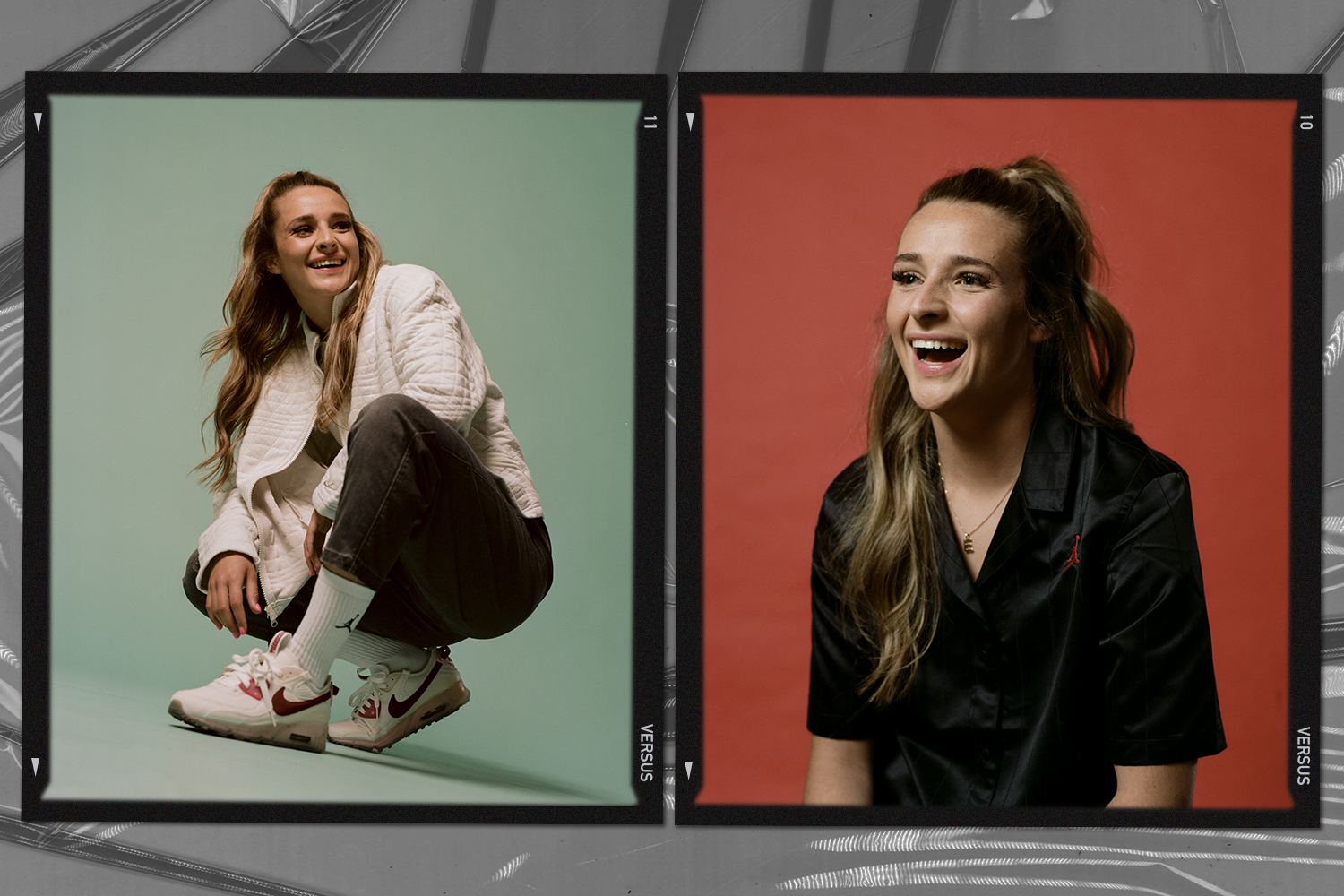 Watching Toone attempt to add so much flair to what we thought was an impossible task, speaks volumes about her love for football. “I’d watch Ronaldo clips on repeat before practising the same skills in the back garden when I was younger,” she told us after setting the VERSUS juggling bar at 23 – channelling her inner-Jumpman to reach such heights. In recent seasons, Toone has likened her play to fellow United midfielder Bruno Fernandes – quick feet, smart passes and an eye for goal. Whether it’s bagging them herself or teeing-up teammates, one thing is guaranteed: if Toone’’s on the pitch, goals will be scored. “For me, expressing myself on the pitch is easy. It just comes so naturally to me. When I’m on the ball, I’m confident. And I like to think I’m quite brave in the way I try to get the ball and play my game.” When ET7 speaks about the game she’s played her entire life, she speaks with unadulterated passion. We get the impression she could talk about football and her beloved United for hours on end! But when asked if she thinks there are any links between the way she plays and her fashion sense, she takes her time before answering.

“That is a proper question that…” she tells us while admiring the black Jordan Heritage shorts-set she’s wearing for today’s first look. “I think there are some similarities, you know. I think that, when you wear things you’re comfortable and feel confident in, you look good no matter what. It’s the same when you’re playing football: if you’re comfortable and confident in your position, your style of play…then you’re going to play well! I think it’s really important to be able to express yourself freely through clothing. Just wear whatever makes you happy at the end of the day!”

“I think with all things fashion, you can express yourself in different ways through what you want to wear, and you can have control over how people view you because of that.” 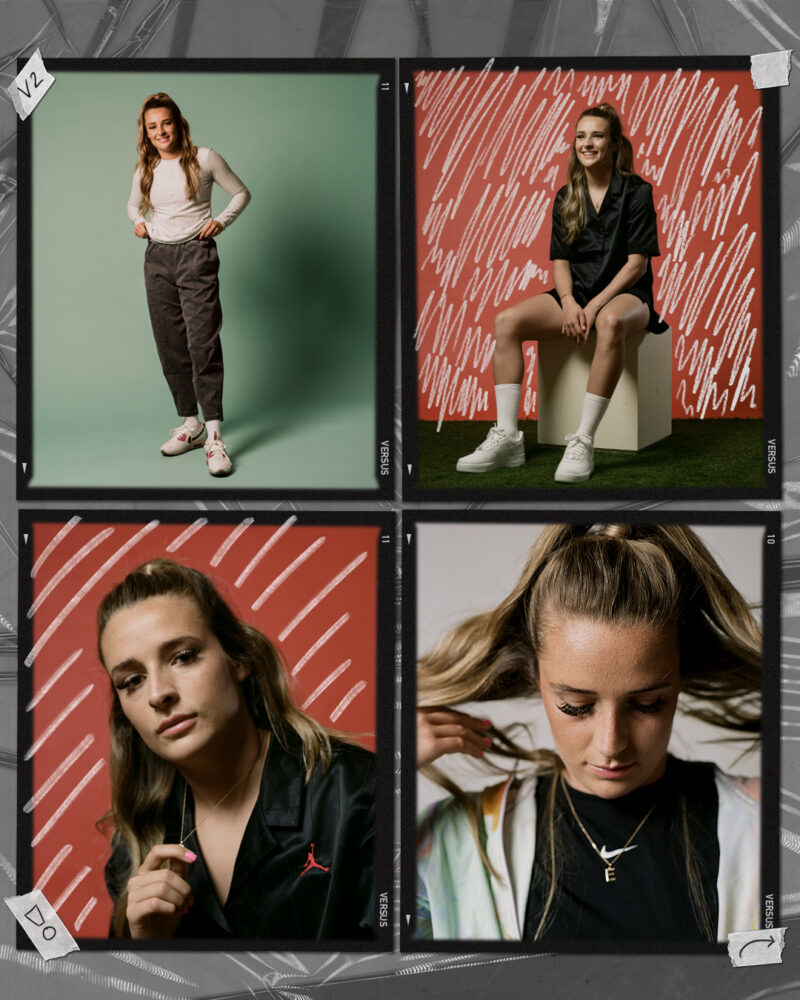 Despite highlighting the importance of comfort, Toone is also quick to tell us how willing she is to try new fits. “I think fashion can open up your world a little bit, you know? You see someone wearing something you really like, so you ask them where it’s from and they might tell you the name of a brand or shop you’ve never heard of before.” It’s that open-mindedness and love for creativity that makes Toone the perfect player for ‘What Ballers Wear’. Pairing a Nike X Sacai black pleated skirt with a matching rainbow-esque Nike Lightweight Running jacket and Epic Luxe leggings, was a touch of genius. “When I come on shoots like this, I try anything!” she tells us, as we admire today’s rotations. Toone’s sense of style is top-tier, so we’re shocked to hear she thinks there are others in the England squad who out-play her in that field.

“I love what Leah Williamson wears, she can pull anything off – she doesn’t always love it when people say that, though. It’s a massive compliment in my opinion! She wears things I wouldn’t necessarily wear or even consider wearing, but she just looks so cool doing it. I really rate that. There are a few other people like that in the England squad to be fair, Keira (Walsh) and Lucy (Bronze) both have really great looks.

“Everyone is so different, and so everyone has their own little sense of style going on. I think with all things fashion, you can express yourself in different ways through what you want to wear, and you can have control over how people view you because of that.” On that note, we ask Toone whether she thinks fashion has more of a role to play in women’s football today, than it did ten years ago. “I would say so, yeah! Now we are more in the public eye, and social media is massive. I feel like because of that, we’re even bigger role models. Young girls and boys look up to us on and off the pitch more than ever before. I would say that fashion – what brands players are choosing to wear especially – is something fans are looking at quite heavily in today’s game.”

“Once you watch one game, you can’t help but fall in love with it. But it’s up to us come July to make sure we do our jobs, and give the fans something to be inspired by.” 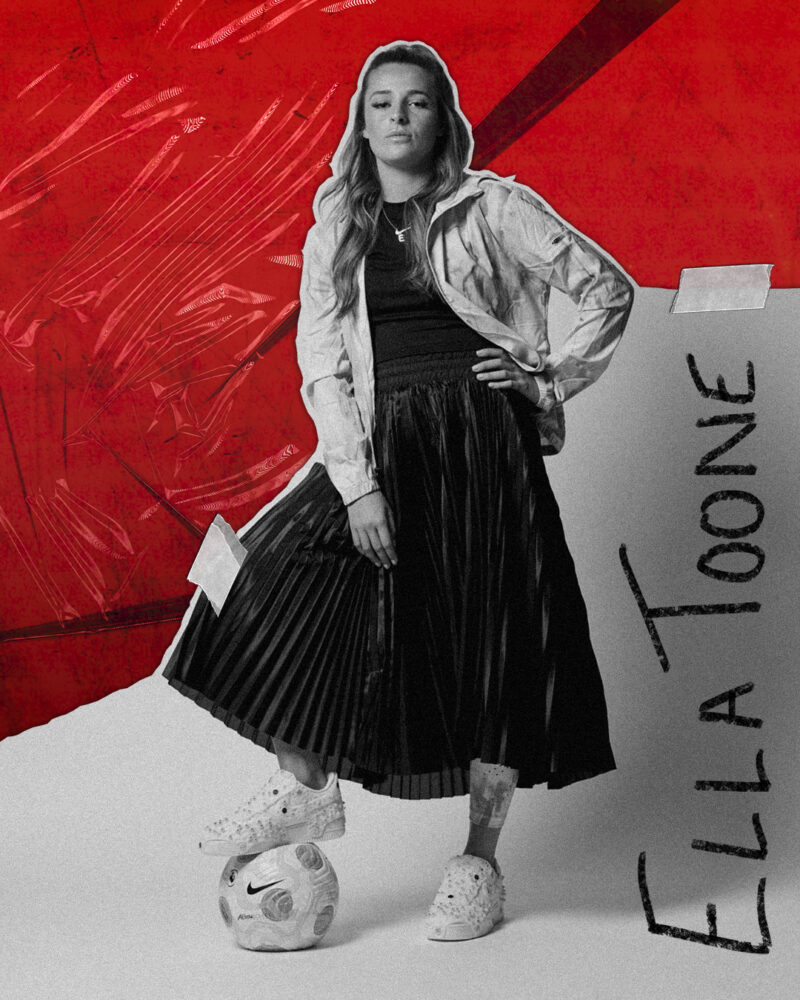 One of the biggest brands people look out for, both on and off the pitch, is Nike. Toone admits to owning pretty much every single pair of CR7 boots growing up. From pink to green, it didn’t matter the colour, she owned them. So, it must be a total dream come true to be sponsored by the same brand she idolised as a youngster. “Absolutely! All I ever used to wear were Nike boots, trackies and trainers and to now be a Nike sponsored athlete, it’s something I’ve always wanted and aimed for in my career. It still feels mad to be known as a Nike athlete though!”

If you spend more than ten minutes with Ella Toone, you realise very quickly how much she wants to continuously improve her game. Not just for her, but for those coming up the ranks too. “We’ve broken a lot of records this season with England, and our World Cup qualifying campaign has been immense.” We jokingly refer to the fact that she’s clocked up what feels like 89 hat-tricks, and she immediately laughs and corrects us. “It isn’t quite that, is it! I wish it was though! It’s been a great season for confidence-building as a team but we know how much there is still to improve, and that’s really exciting. This summer is going to be massive for women’s football, and we’re going to go out there and make the nation proud. A Euros on home soil, it’s going to be amazing!”

Before we said our goodbyes to ‘Tooney’, we asked her one last question about her hopes for the future of women’s football, especially in England. “It’s always about the fans, and making sure they can get to as many games as possible. We’ve sold out games for this summer, and hopefully that encourages people to attend club games next season. Once you watch one game, you can’t help but fall in love with it. But it’s up to us come July to make sure we do our jobs, and give the fans something to be inspired by.”

If anyone can inspire a nation to fall in love with the women’s game, it’s Ella Toone.