'Home Away From Home' is a new editorial series from VERSUS and VISA, where we hear how some of the most influential voices in football culture are lining up behind 'second teams' this summer in celebration of the world class football on our doorstep. First up, we meet lifelong Gooner, Dulwich Hamlet FC baller and one of the most gifted DJs to hail from England, DJ Monki. We sat down with Monki to hear about her adoration for the Spain national team.

Lucy Monkman – better known to the world as Monki – is a DJ, producer, label founder, broadcaster, and absolute baller. The Dulwich Hamlet FC jugadora has been kicking a ball for as long as she could remember. From playground antics to pre-season training with West Ham U21s just last year, Monki lives and breathes football.

The South Londoner’s love for North London’s finests, Arsenal, started in Primary School and flourished with the guidance of her grandad Jerry. “He sent me this picture yesterday actually," she says as she shows me a photo of him holding an Arsenal vs Benfica match-day programme from the 1970s. “He’s a legend and knows everything about the club, I love him to bits.”

Monki’s passion for Arsenal might have been passed down from her family, but her love for the women’s game is something she’s been passing onto others for years. Whether it's supporting local footballing charity Girls United on her days off or traveling to France with her girlfriend to watch the USWNT win a back-to-back FIFA Women's World Cup. There isn't an area of the women's game Monki isn't familiar with.

VERSUS sat down with one of the biggest advocates for women's football to talk about the power tournaments like the UEFA Women's EURO have when it comes to combatting perceptions of women in sport, why she thinks international football is a beautiful thing, and her respect for Spain’s women's national team. 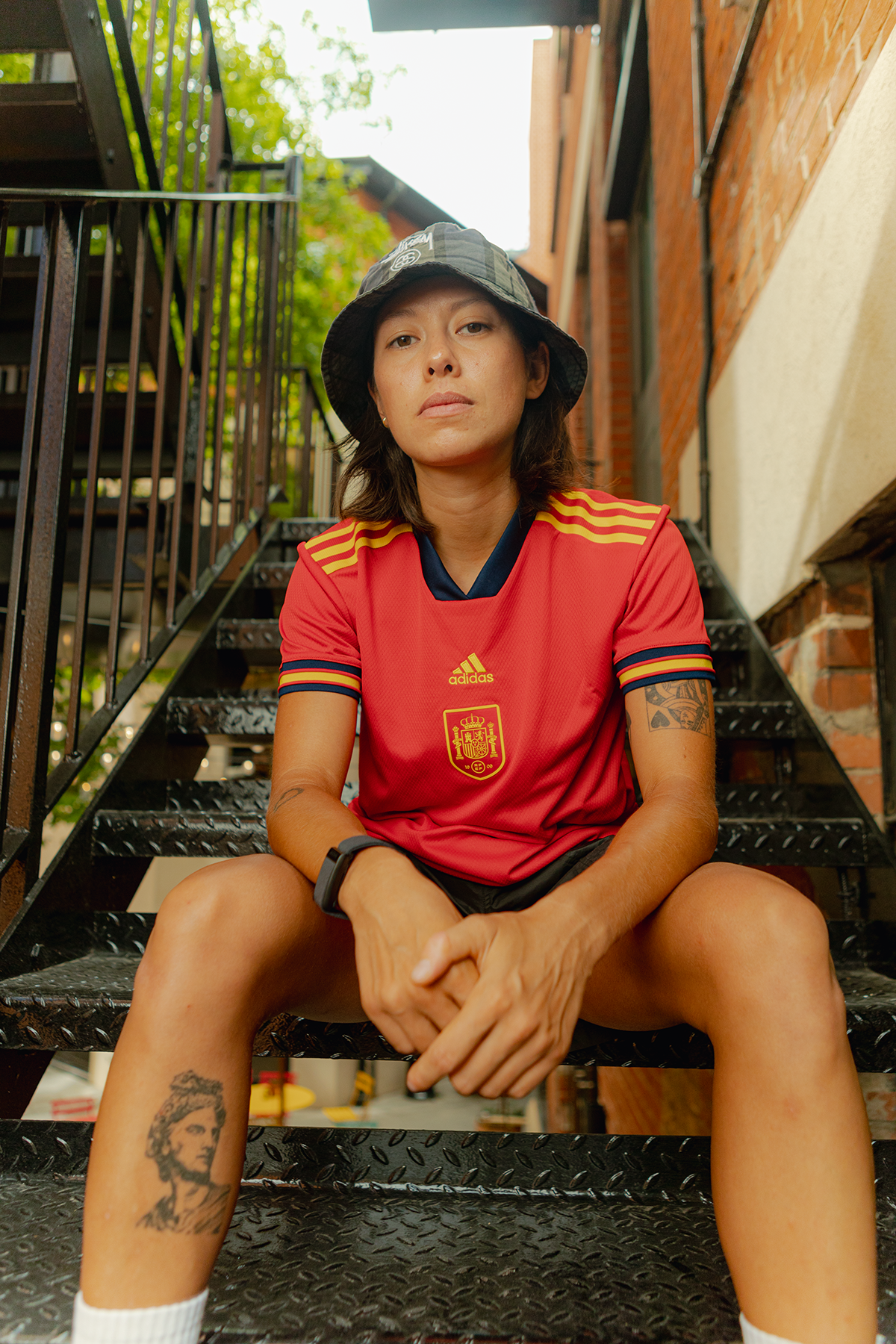 VERSUS: ‘Home Away From Home’ is all about encouraging fans to welcome a second team. Why do you think that’s an important thing to do?

Monki: I think it’s really important to give support to the nations that aren’t necessarily at ‘home’. There are some disparities between nations, so if you can give your time to a team that might not necessarily have the backing of others, that’s only going to help the game grow.

As a fan, you just want to see the best talent across the whole spectrum of the game – not just your nation. So for me, the better the standard of football is worldwide, the more enjoyable it is to watch.

Imagine what the game will be like in ten years time if we continue to support football in other nations and not just our own. You want every team to receive the same level of support where possible, whether it be at the domestic or international level. It’s never enjoyable to watch one team dominate, sometimes it’s actually a bit hard to watch!

Talk us through your reasoning for selecting Spain as your ‘Home Away From Home’ team?

I spend quite a lot of time in Spain!

So, this it’s quite literally a ‘home away from home’…

It really is! I spend pretty much every summer in Ibiza DJing, I can easily go there up to ten times in a season. I also love Barcelona as a city, and there are a lot of Barcelona players who currently play for the Spanish national team.

I saw Barcelona play a couple of times last season against Arsenal Women – unfortunately as a Gunner, that didn’t end well – and they were such an impressive squad to watch. I remember a couple of their players were at the 2019 Women’s World Cup, and to see how much they’ve developed since then, it’s amazing. From what I remember, they were a fairly young, inexperienced side in 2019, and to progress as much as they have in such a short space of time, it’s great to see. They’re the sort of side who will bounce back from losses and find a way to win, whatever the circumstance. Spain definitely has a special place in my heart. 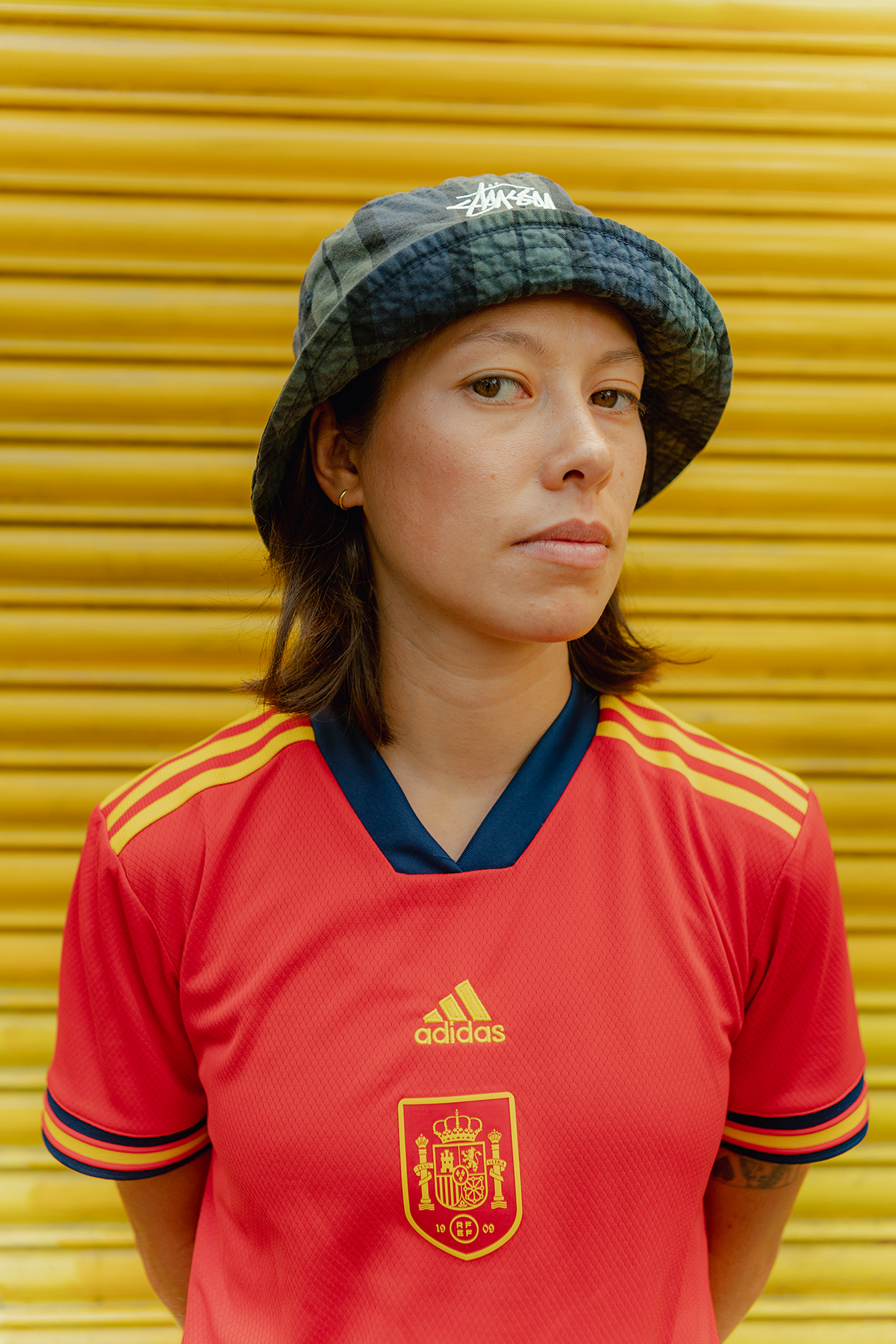 There have been so many iconic Spanish players over the years especially from an Arsenal perspective: Santi Cazorla, Cesc Fàbregas, José Antonio Reyes, Héctor Bellerín. Would you agree, football seems to be a core part of Spanish DNA?

Oh yeah, football is a massive part of Spanish culture. I’ve played with a few Spanish players over the years and they were an absolute joy to play with. I love tiki-taka football. That fast-paced, one-touch style of play. And to see the women’s national team embody that as well, it’s great – seeing the style you love get played at the highest possible level, it’s a real eye opener! You can’t not be impressed by that level of skillfulness and creativity. Coming up against teams like Spain can only make you a better player too.

Having the opportunity to see so many different types of football being played on the same stage, it’s brilliant to see. If you’re a football fan, international tournaments are great for witnessing that especially.

What do you think is the beauty of supporting a second team?

I think getting to experience another footballing culture, as well as in the broader sense too.

I love going to games abroad, it’s something me and my girlfriend always try to do when traveling. We went to a Split game in Croatia once, that was very random. We also went to Andrés Iniesta’s last game for Barcelona when they lost 5-4 to Levante – that was an unbelievable experience. We’ve been to games in Italy, America and recently tried to watch a game in Mexico but didn’t quite get round to it, but it’ll happen one day.

I think when you go to watch a football match in a different country, it’s a bit like dipping your toes into the culture of the place you’re visiting. It’s mad that we’re now experiencing lots of different European cultures and customs in England because the tournament is on home soil.

Completely. How often do we get to see a group of Swedish fans walk down Sheffield high street waving flags, chanting in Swedish, and brightening up the place!

Exactly, that’s what I mean about being exposed to new people and cultures, and that is what’s really special about an international tournament. 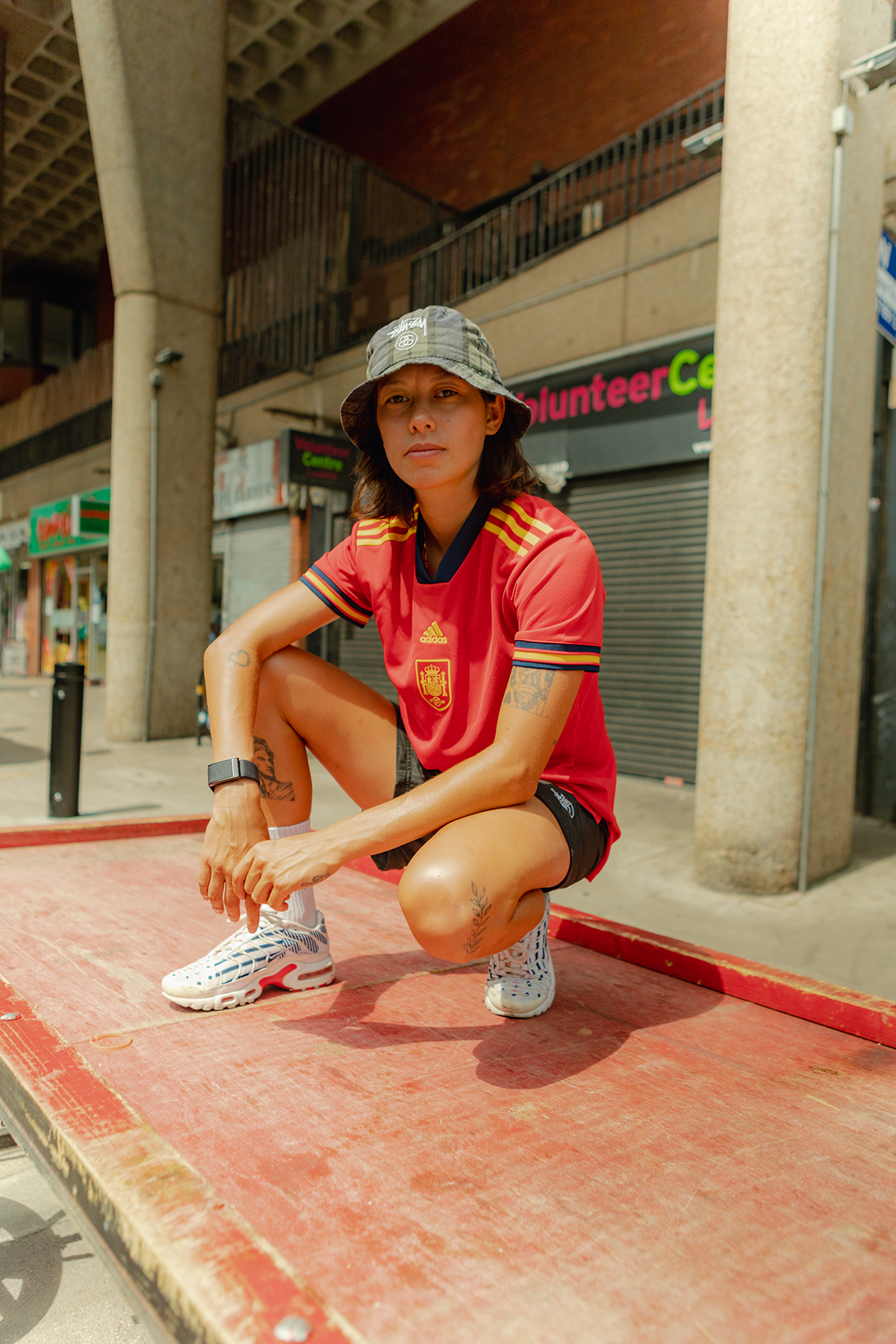 What are your thoughts on Spain’s new home shirt?

I am a big fan of the central badge design. It reminds me of the England Euros ‘96 shirt. I like the fact the colours of the Spanish flag make up the sleeve cuff too, that’s similar for the Germany kit. I think adidas have done a really great job at designing their federation kits this year.

Do you think that this tournament has the power to change people’s perceptions of women’s football?

I think every tournament does to be honest. Off the back of 2019, there was just so much hype and it was really important that everyone continued to build momentum from that – we had a packed out Wembley with 70,000+ fans there to watch England vs Germany the November after that tournament. But of course the pandemic started the following year and put a bit of an end to further growth.

Right now, I feel how I felt in 2019 – like I’m in a bit of a bubble! Everyone’s talking about the tournament. I heard a group of fairly old men talking about England at a local cafe earlier today, I loved hearing that! What’s really helped as well is the fact we’ve now got women’s football on TV every week during the season. Before then, people struggled to access the game.

I don’t think it’s ever really been a case of people not having an interest in women’s football, I think it’s more been that people just never knew how to watch it before it appeared on their TV screens.

My Dad called recently to ask if I watched the Spain vs Germany game – he’s a big Spain fan, always has been. And that’s possibly the first time he’s ever called to talk specifically about women’s football.

You see! That’s so wicked! I love that, I want more of that. I want us to get to a point where talking about women’s football is a part of everyday conversation.

What I’ve really enjoyed about this tournament is how much I’ve heard people talking about non-English players, and I think the fact we keep breaking records for non-home games at the Euros is a testament to how much quality is on show.

Don’t get me wrong, you always get the amazing Dutch fans who travel across Europe to watch their side, or the thousands of Barcelona fans who come to watch Spain. But it’s been great to see so many Austrian or Portuguese fans adding so much colour to the stands, a lot of them coming from London and across the country too. 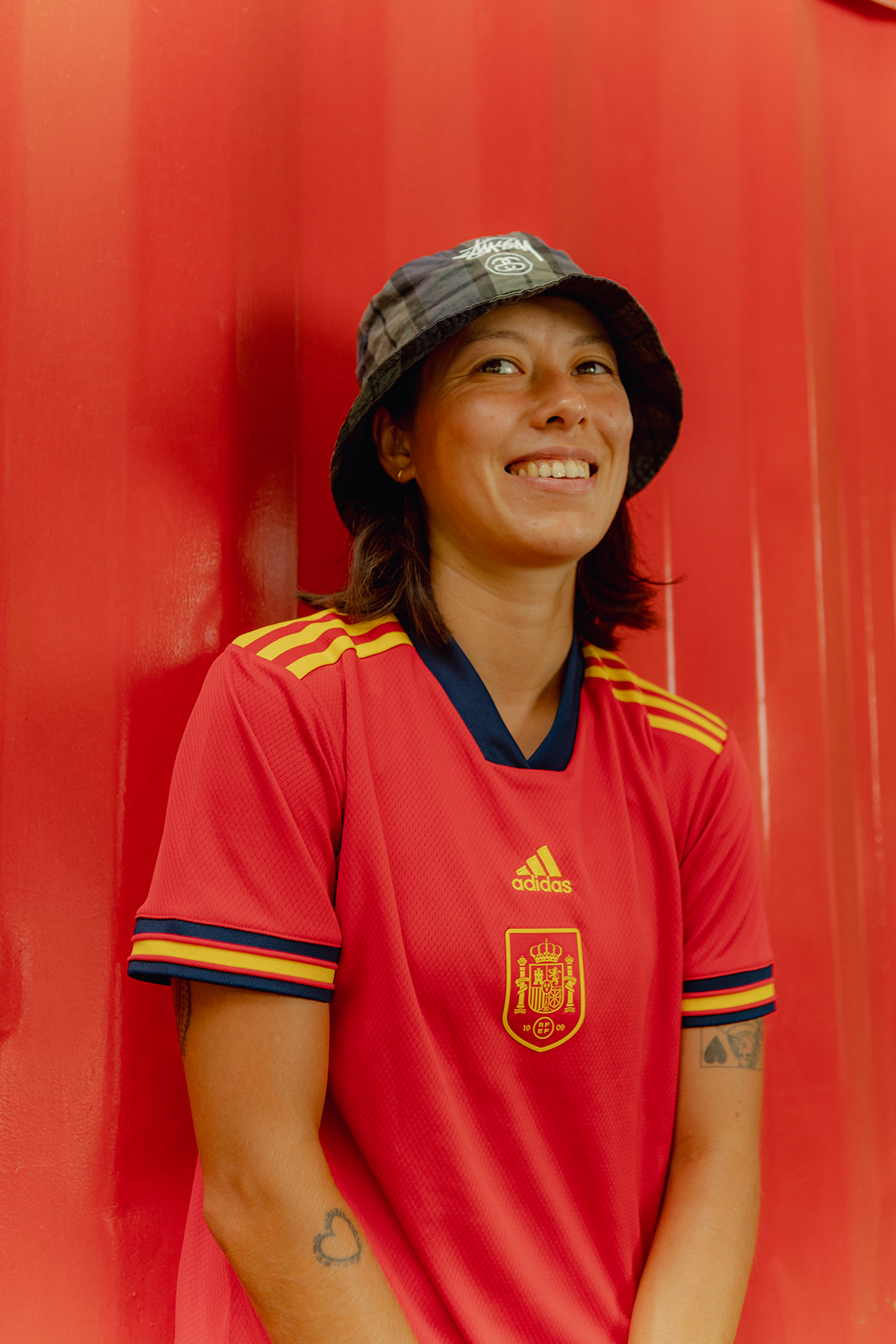 Why do you think international tournaments are so amazing?

I think it’s the festival atmosphere they create. As someone who works in music, festival season is my favourite time of the year. It’s usually sunny outside, you’re with your mates, everyone is up for a laugh. People feel like they’re on holiday

Do you think Spain will give you that festival feeilng in the final this month?

Such a hard one now because they’re playing England in the quarter-finals! Of course I want England to go all the way, but I think playing Spain will be a real test for them. Possibly the biggest test of the tournament so far. Either way, it’ll be a good game to watch.