'Home Away From Home' is a new editorial series from VERSUS and VISA, where we hear how some of the most influential voices in football culture are lining up behind 'second teams' this summer in celebration of the world class football on our doorstep. Next up, we meet one of the most gifted wordsmiths in UK culture, Guvna B, and hear about his love of the France national team.

Isaac Borquaye AKA Guvna B is a rapper, author, public speaker and all-round East London living-legend. The lifelong West Ham fan loves everything football. From the grassroots game to watching his beloved Irons represent in the UEFA Europa League, Guvna’s manor transcends the game's top flights, and it’s Custom in his House that others recognise that too.

To Guvna, the beauty in the ‘beautiful game’ is in its ability to speak to people from all walks of life. It doesn’t matter where you’re from, how old you are or what team you support, football should be for everyone. Football's power to unite and bring people together is one of the reasons why he's enjoyed watching UEFA Women's EURO 2022 so far this summer. The tournament's ability to introduce the women's game to those who otherwise might not have had access to it, helps to foster an environment whereby fans see football as just that. Football. It shouldn't matter who's playing it, the game remains the same. And so should our respect for it as fans.

VERSUS sat down with the Massive music icon to talk about the power of international football, why he thinks this tournament will act as a tool for changing outdated perceptions of the women's game, and his adoration for France's women's national team. 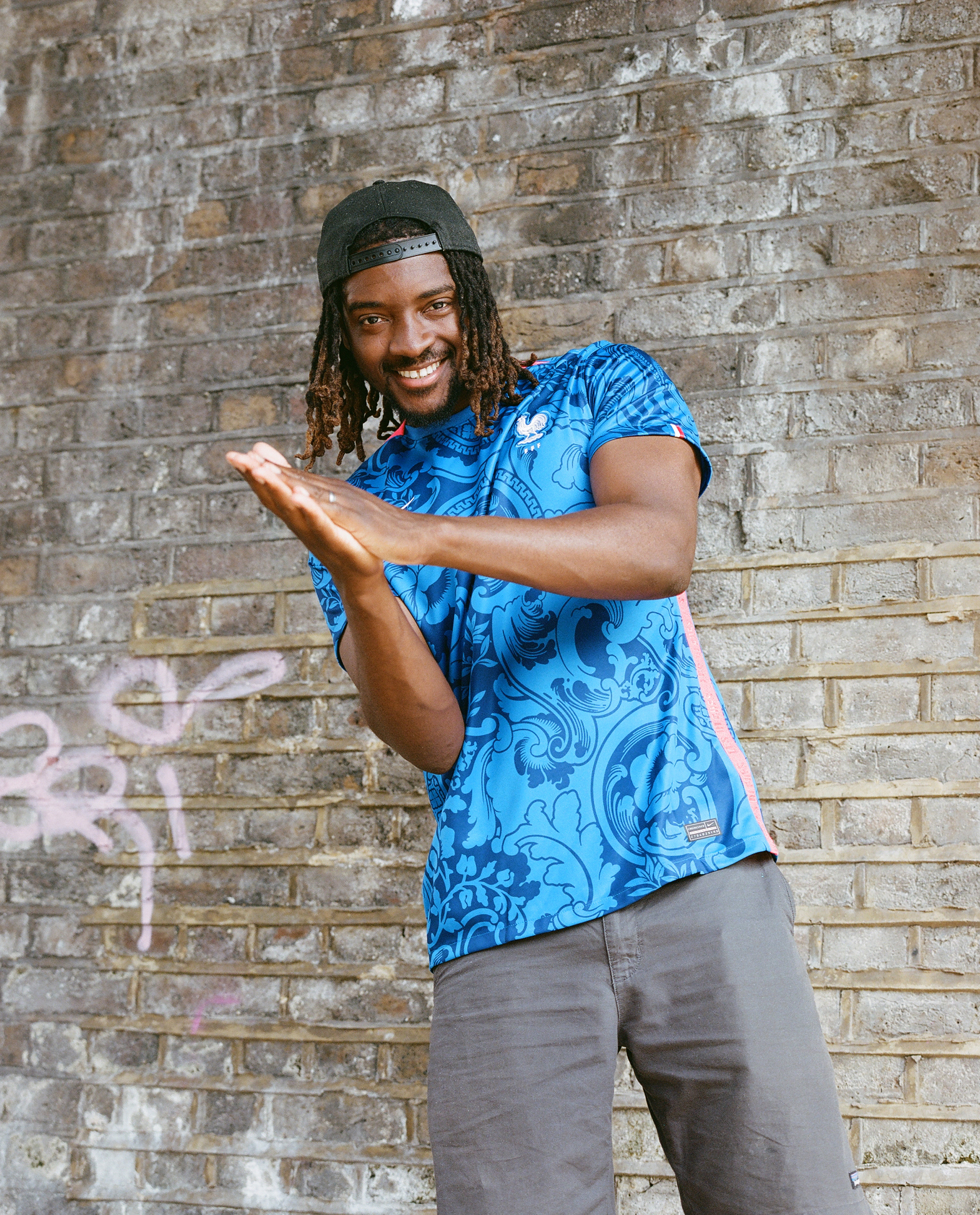 VERSUS: ‘Home Away From Home’ is about encouraging fans to open their eyes and ears to the amazing teams playing in England this summer. Why do you think that’s an important thing to do?

Guvna B: I think it’s great to provide as many pathways and access points to women’s football as feasibly possible. When I’m watching women’s football – regardless of what country or team are playing – I’m seeing families, young people, men and women from all walks of life enjoying the action. It’s great football! I think, put your outdated views to one side and just appreciate: a) the quality on display and b) the fact this is a game that can bring people together. Football’s ability to unite people is powerful, and supporting a second team can help it do just that.

Supporting more than one team encourages others to find ways they can get involved, so do it…go and support your ‘home away from home’ people!

This tournament has the power to change some of the perceptions about women’s football. What would you say to people who might not put the women’s game on the same pedestal as the men’s?

If I’m being completely honest with you, I’ve never been able to relate to those people.

I think that you can enjoy various things at the same time, and for different reasons. My love for football doesn’t solely apply to the Premier League – don’t get me wrong, I love West Ham! But I also love grassroots, Conference League and League Two football. You get a lot of people turn up to those games regardless of the quality of football on offer. The standard of football we’ve got the privilege of watching this month and every week in the Women’s Super League is amazing, and if you’re a football fan, you should be able to recognise that.

Ultimately, I just think, stop comparing stuff man! Obviously men and women have their genetic differences, but they can still play the game to a ridiculously high standard! Just open your mind and try to take it for what it is.

I think, for a lot of people, they don’t watch women’s football or want to give it the time of day because of ‘mob mentality’. They don’t see their mates or acquaintances watching or talking about the games, and when they do hear things, it’s usually silly comments based on narrow mindedness. Just give it a try! Me and my mates have been chilling at home, watching the games, having a laugh – it’s no different to when England were playing last summer. People just need to put aside the noise from the outside and not be so easily swayed. Be your own person. 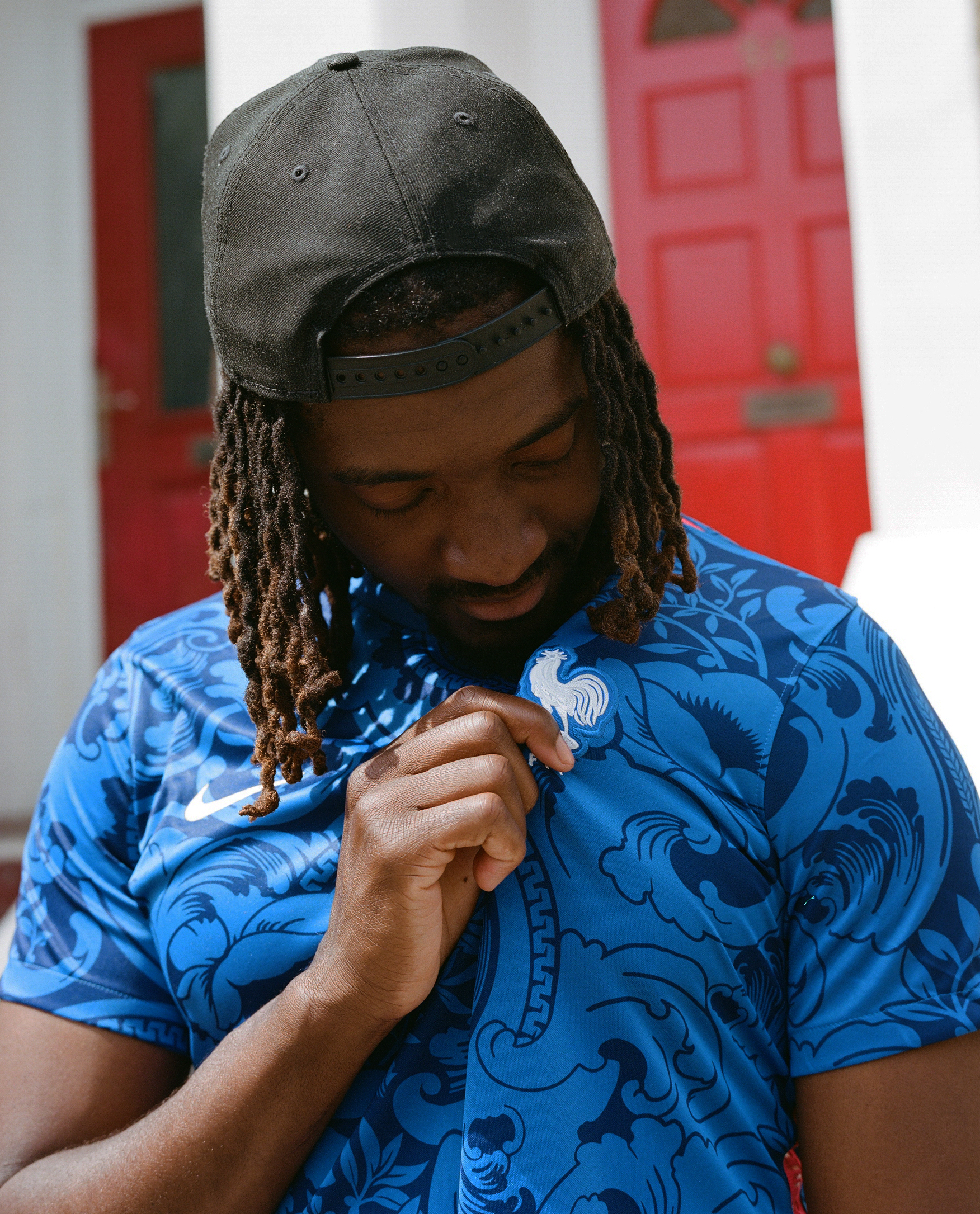 What was your reasoning for choosing France as your second team for UEFA Women’s EURO 2022?

I’ve always rated France. My first entry point to French football was the men’s team, but since I’ve been watching and learning more about their women’s team, I’ve grown to really respect what they stand for.

One of my favourite things about this team is they have so many amazing athletes who are Black women, and seeing that fills my heart with joy. For far too long, Black women have been ostracised from society because of their race and gender, so to see so many contribute to the success of a nation and be championed for it. That’s what the game should be about.

That’s something they’ve been praised for over the last few weeks especially. Why do you think representation in football is so important?

Football represents the masses – or it should do at least – and for that reason, it can be an incredible voice. Sport in general is often able to cut through and send messages, which can reverberate and enter other industries or conversations. Representation at this level is especially important because it shows other teams, across all levels, that they can also play their part in making sure the game really does represent the people who watch it.

Who’s one of your standout players from the tournament so far?

Grace Geyoro. She’s been amazing to watch, and I’m a rapper so I love a play on words. Geyoro, Euro…she was meant to light up this tournament! 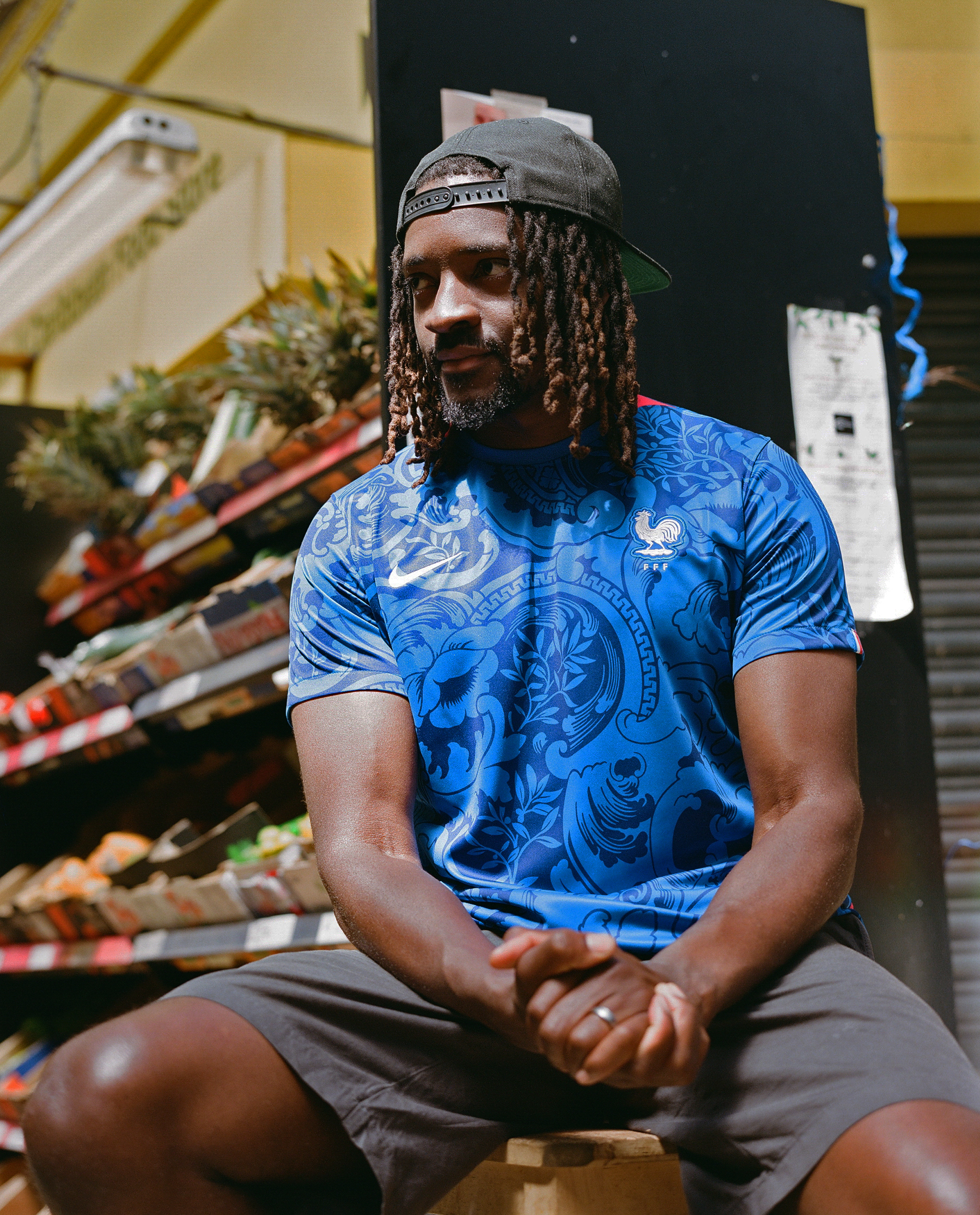 What do you think the beauty of international football is?

It has the ability to unite people who are sometimes divided because of various different reasons, which is always a great thing. But I think if we can continue to harness that power post tournament, that’d be an even greater thing.

I guess something else that’s beautiful about international football is we get to experience different cultures and styles of football. It opens up people’s worlds, especially for those who can’t always travel to new places. And especially when it comes to women’s football, in England we’ve been given more access to the game because of new broadcasting deals but I don’t personally know much about women’s football in France. I don’t really know where to go if I wanted to watch the French domestic league for example, so international tournaments are good ways of putting all football on a centre stage.

What do you think about France’s latest home kit?

It’s actually so sick. The minor, little details like the red stripe on the inside and the ‘Les Bleus’ text that runs down it. It’s so nice! It’s got to be up there with some of the best kits in the competition! 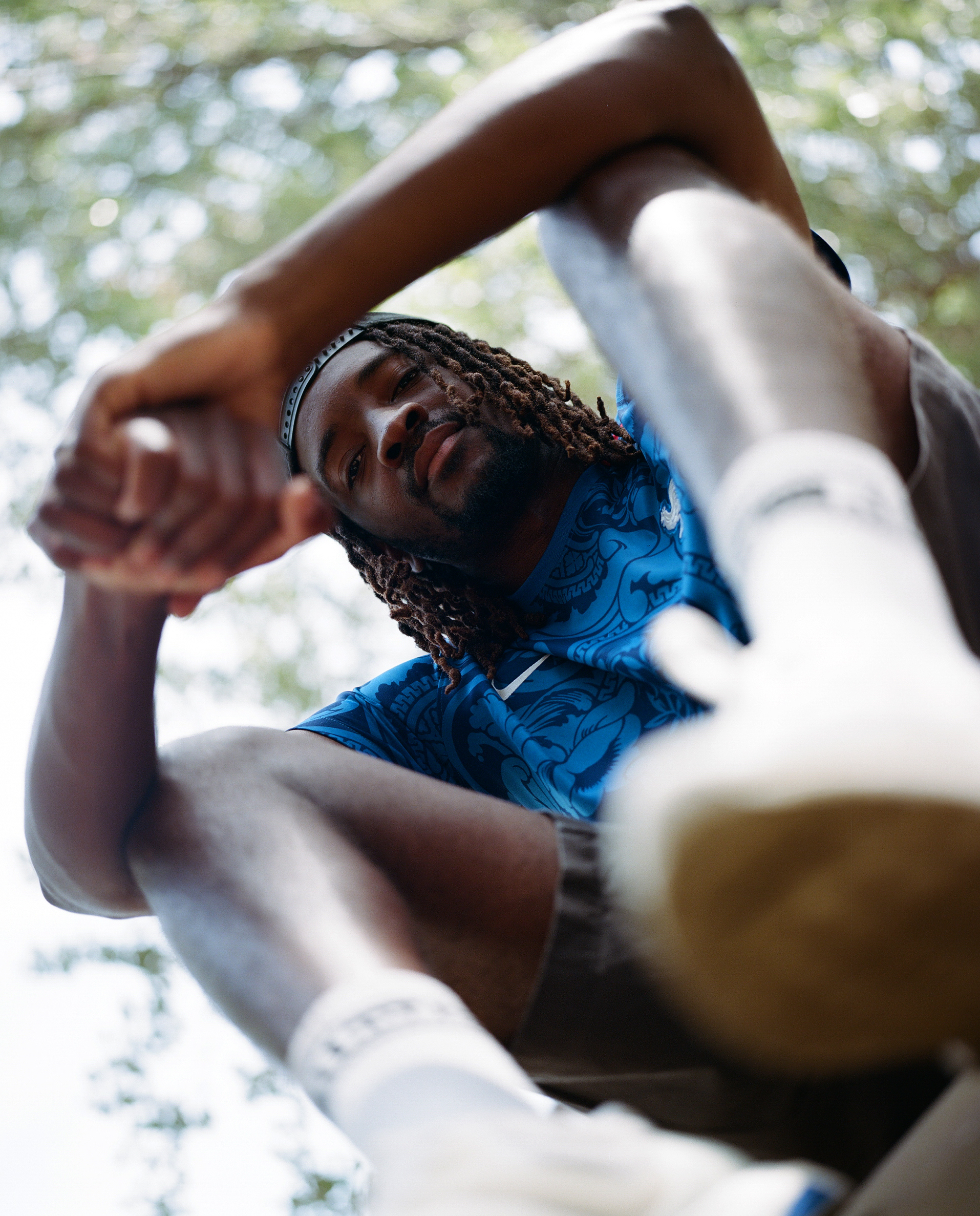 Do you think UEFA Women’s EURO 2022 has the potential to change what some people think about women’s football?

I think it’s a huge opportunity for people to learn about the game, for sure. It provides an opportunity to educate people who have archaic views about women’s football. I also think, how can you not be pulled in by the buzz? This is a home tournament! We’ve got some of the best players in world football right on our doorstep, don’t waste it.

Maybe I think that because I am just so plugged into the game, but my dream is definitely for us to walk around Brixton Market one day for example – where we are right now – and see the women’s kits on market stalls, hear people talking about the games on the Underground and see coverage on the back pages of every, single paper. What we expect to see and hear when it’s a men’s Euros. We might be a few years or so from that happening, but that is the direction we need to head in and think we are going about it the right way.

I want to be able to look back when my kids ask me where I was for my first UEFA Women’s EURO, and I can tell them: “course I remember! I was there!” I want to actively contribute to the growth of the game, as a fan I have that responsibility. I want to keep the conversation going and help others get excited by it because it’s something worth getting excited about! I don’t want to look back and think I was just ‘existing’, I want to be a part of the movement not the moment.

Who do you think France are going to play in the final at Wembley? They’re your second team, so I’m confident you think they’ll get that far!

On July 23, France will take on Netherlands in the Quarter Finals of UEFA Women’s EURO 2022. Tickets are on sale at uefa.com/womenseuro/ticketing.

Photography by Christian Cassiel for VERSUS.