Hailing from West and now the Prince of North London, Bukayo Ayoyinka Saka is a true son of the Gunner soil. A journey that started for him as a young boy, has seen him become a man in the royal red of his boyhood club. From Hale End to heroics. Raised in the values that propelled some of the game’s greats who came before him, the young England star has now become a Premier League centurion before the age of 21.

They say heavy is the head that wears the crown, but Bukayo has made being football royalty look easy. The journey to this point in his career has been exemplified by his character both on and off the pitch. Ever-present, ever-dependable and ever-ready for what might lay ahead of him. Although 100 Premier League games is impressive, what’s even more astonishing is the fact he was in the Starting XI a staggering 88 times. With 17 goals and 15 assists to his name so far, Saka is the gift that just keeps on giving. He’s made the Emirates his home in recent years, and has balled out on the club’s famous ‘carpet’ with freedom and energy like no other at times. Off the pitch we’ve seen Saka show compassion, empathy and kindness in abundance - you just have to watch ten minutes of All or Nothing to realise he is quite simply: a great person, as well as a great footballer.

100 as a number represents completion, but the truth about Bukayo is, he is just getting started. Whilst his dreams have now become reality, this moment in his life marks a checkpoint. One to not only take stock of what it took for this starlet to shine bright, but to look ahead to ‘New Horizons’. ‘God’s child’ has been a blessing since his debut but the same belief, hunger and humility that got him to this milestone, is what is going to take him even further.

To celebrate the occasion, VERSUS sat down exclusively with BS7 to talk about the seemingly never ending highs of his young but fruitful career, and what’s next for Arsenal’s posterboy.

Upon arrival, Bukayo breezes in with all the charm and humbleness associated with the Arsenal starboy. There is an innate sense of confidence radiating from him as he steps into the changing room where our stylist is ready and waiting for his arrival. When seeing the rail of clothes laid out before him for the first time, ‘B’ – as his club rep affectionately refers to him – immediately gravitates towards the loudest, most ‘out-there’ fit on display: an all-leather Prada AW22 boiler suit accompanied by a leather overcoat and complemented with a pair of Gentle Monster sunglasses, chosen specifically by the young baller himself.

If you couldn’t already tell, as a player and individual, Bukayo is now totally fearless – both in his on-pitch prowess and uncompromising stylistic self-expression. While he’s enjoying his time perusing pieces on offer from some of the biggest fashion labels in the game – Prada, A-COLD-WALL, Off-White and Bottega Veneta to name a few – we kick off the interview.

Photography by Henry Jay Kamara for VERSUS. 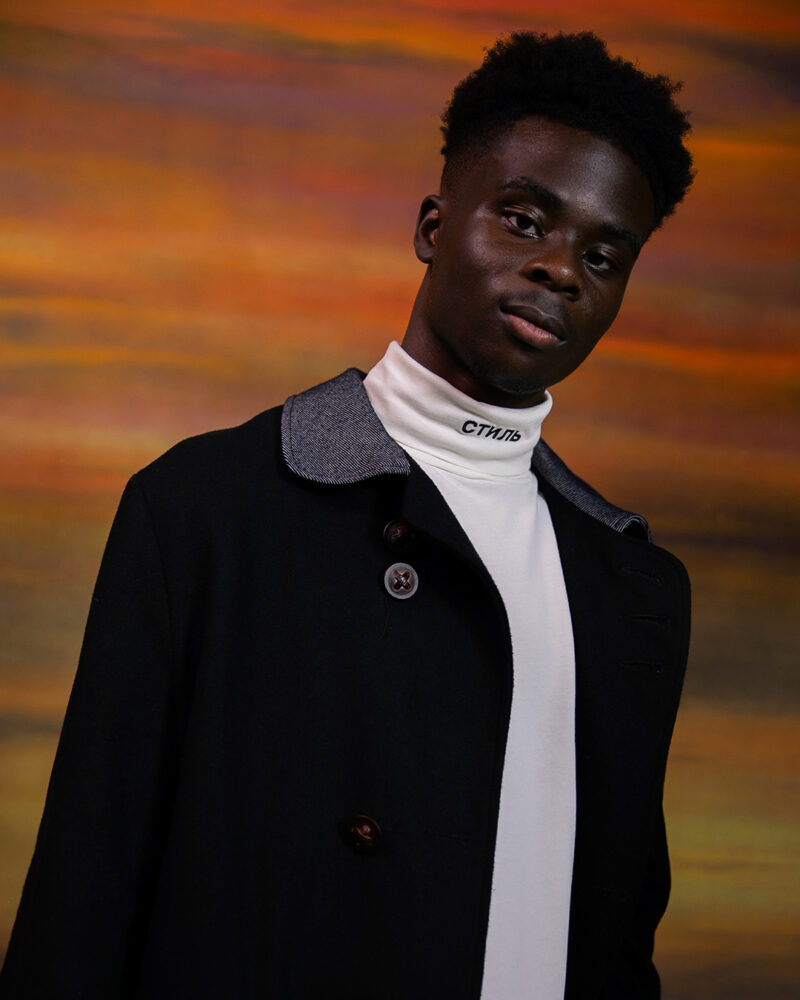 VERSUS: First and foremost, congratulations on making your 100th Premier League appearance recently.

To reach that milestone before the age of 21 must be a surreal feeling! How does it feel to now be a part of Arsenal’s Centurion Club?

Bukayo Saka: It feels crazy you know! It’s a dream I’ve had since young, so to be able to turn that into a reality is an unbelievable feeling.

To play 100 League games for a club like Arsenal especially, means so much to me. I’m just so proud to have been able to achieve something like that at such a young age. It makes me so excited for what’s next.

You made your debut four seasons or so ago now. Do you feel as if you’ve changed much as a footballer and as a person since playing that first game?

I think, as a footballer I’ve definitely changed. I’ve grown a lot in terms of playing experience, maturity on the pitch, and tactical understanding. As a person, there’s no denying I’ve developed as well.

I’ve gotten older and wiser, and life for me now isn’t the same as what it was back then. I’ve had to learn how to adapt to the pressure and the attention from fans and media, especially.

What would you say the main difference is?

The main change, or changes I’d say are probably…my life outside of football. I can’t do certain things I used to do before. There’s a lot more sacrifices I’ve had to make in that sense, but it’s all worth it because, where I am now, this is what I’ve dreamed of my whole life. I wouldn’t change any of it for the world.

Speaking of dreams, when you were a youngster in the playground pretending to score for Arsenal, does the reality of your life now match-up to that?

When you’re young, you never really know exactly how it’s going to happen. You just dream of one day putting on the Arsenal shirt and playing the game you’ve always loved! And for me to have done that 100 times already – in the Premier League as well – I never in my life imagined my career panning out like this, especially before turning 21-years-old. I’d say it’s probably better than anything I ever thought was possible. 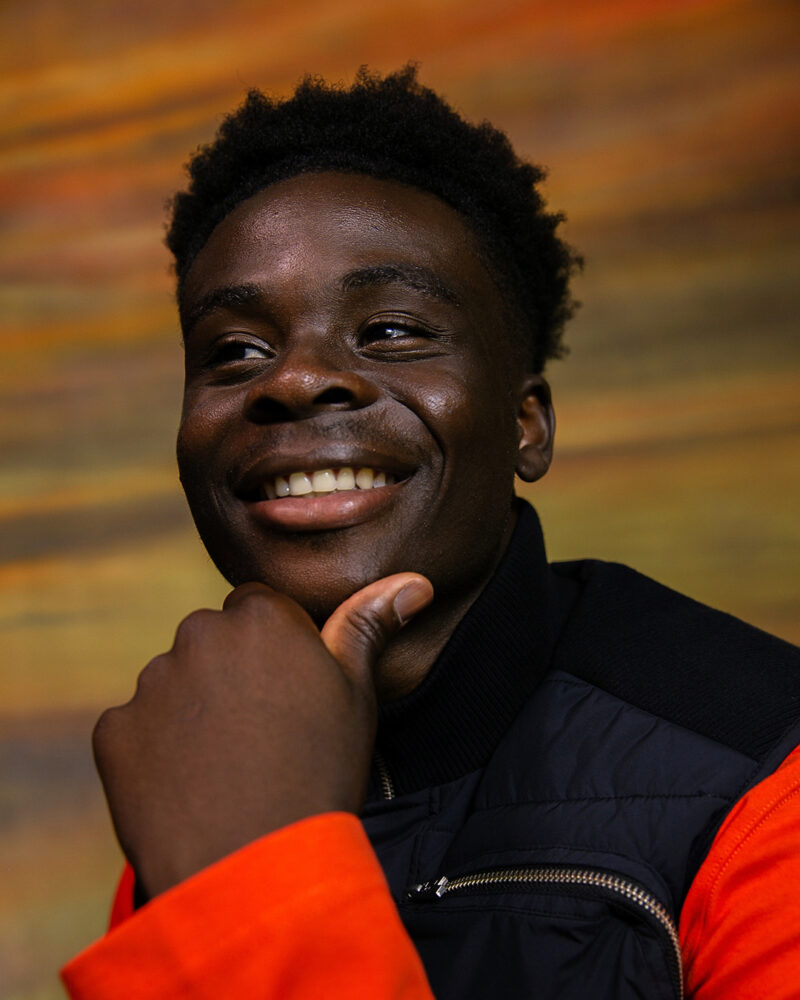 “I’ve spent more than half my life as an Arsenal player! I’ve had so many great memories with this club, and I’m about to make so many more.”

Since playing for Arsenal, you’ve worn the No.87, No.77 and now the infamous No.7 shirt. What do each of those numbers represent to you, personally?

So, No.87 was my first-ever number as a professional player. I’d just come up to London Colney as a scholar and I was doing everything in my power to make the First Team, which is obviously a process. But I worked up the ranks through the U18s and U23s, where every single day I made sure I believed in myself, and worked tirelessly to achieve that end goal of playing with the pros. That shirt number will always be special to me because I ended up making my debut wearing it, after all that hard work and dedication.

The following season I changed to No.77, and that’s when I kicked on, played more games and racked up some important minutes. Arsenal then trusted me enough to wear the iconic No.7 shirt.

From that moment, I really felt that the club believed in me and that was a really big boost to my confidence. Every time I now step out onto the pitch I can feel the support from the fans and the club. They’re both 100% behind me, and that helps me to play ‘my football’ freely.

How important is the club’s trust in helping to build your sense of self-belief?

First it needs to come from yourself, after that it comes from the club, your manager, teammates and the fans. If you have all of that support, you can’t help but believe in your abilities. Like I said, I feel like I can be free and play the football I love playing because I know that everyone is behind me. That is such an amazing feeling, and it’s one I’ll never take for granted. I’m forever grateful for the love and support I receive from the Arsenal family.

Everyone has had the pleasure of seeing you grow from a boy to a man, but something people have continued to refer to you as is, ‘God’s son’.

How important is religion to you in terms of this journey you’re on as a professional footballer?

Religion is so important to me, and I can’t stress that enough. I always say that God is great, and religion allows me to be content and happy at all times, which is really vital because as we all know, football can be a roller coaster.

There are so many moments when you’re ‘up’ because you’re winning, and massive moments when you’re ‘down’ because you’re losing. Religion just allows me to keep faith that God’s plan is perfect, and therefore, there is nothing for me to worry about. I can be happy knowing that God knows what’s best for me, and that’s how I approach my life and career. 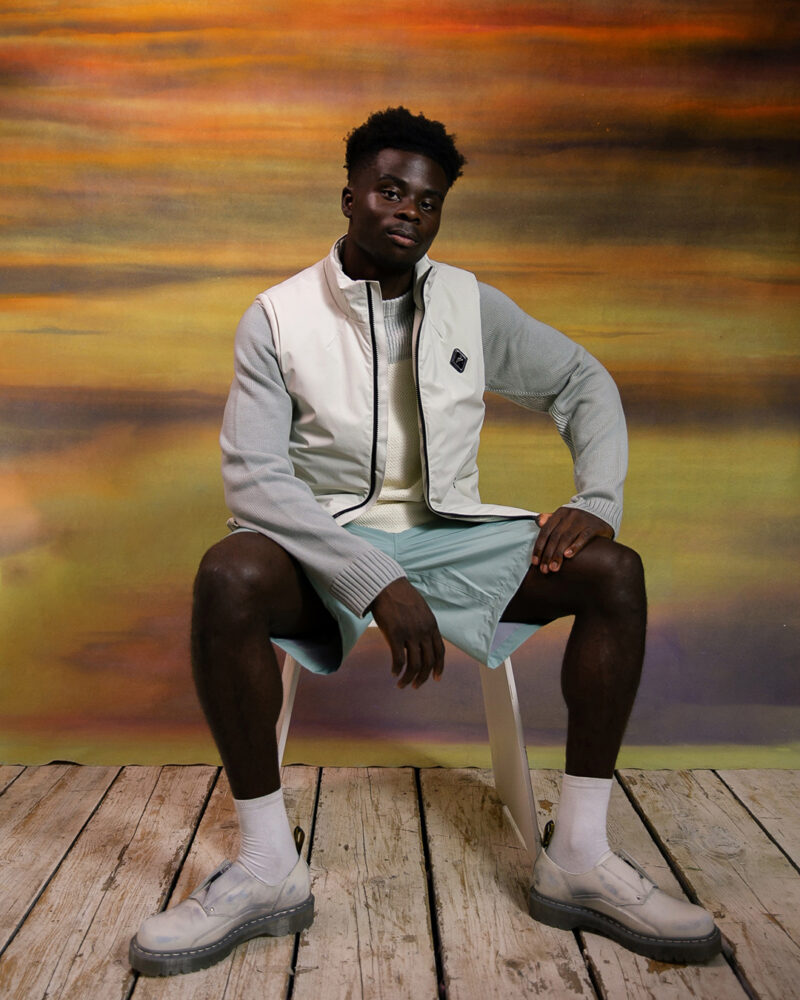 “I feel like I can be free and play the football I love playing because I know that everyone is behind me. That is such an amazing feeling, and it’s one I’ll never take for granted.”

This milestone – 100 Premier League appearances – is one that allows for reflection.

When you look back on those games and performances, what are some of your best moments?

The best moments are when you’re winning and you get to look up to your family in the crowd – just seeing how happy and proud they are, it means everything to me. Being able to share those moments with your loved ones, especially when playing in a big game like a North London Derby, it’s a mad feeling you know. When I scored my first NLD goal, wow. Being able to see my family and have them experience that with me, that was a moment I will never forget. Ever.

Scoring against Manchester City on New Year’s Day was also a special moment for me too. Unfortunately, the end result didn’t go our way but I love playing in those big games – everyone saw how much that meant to me by the way I celebrated!

There have been so many moments the more I think about it, but I’m now just really looking forward to making more with this club. 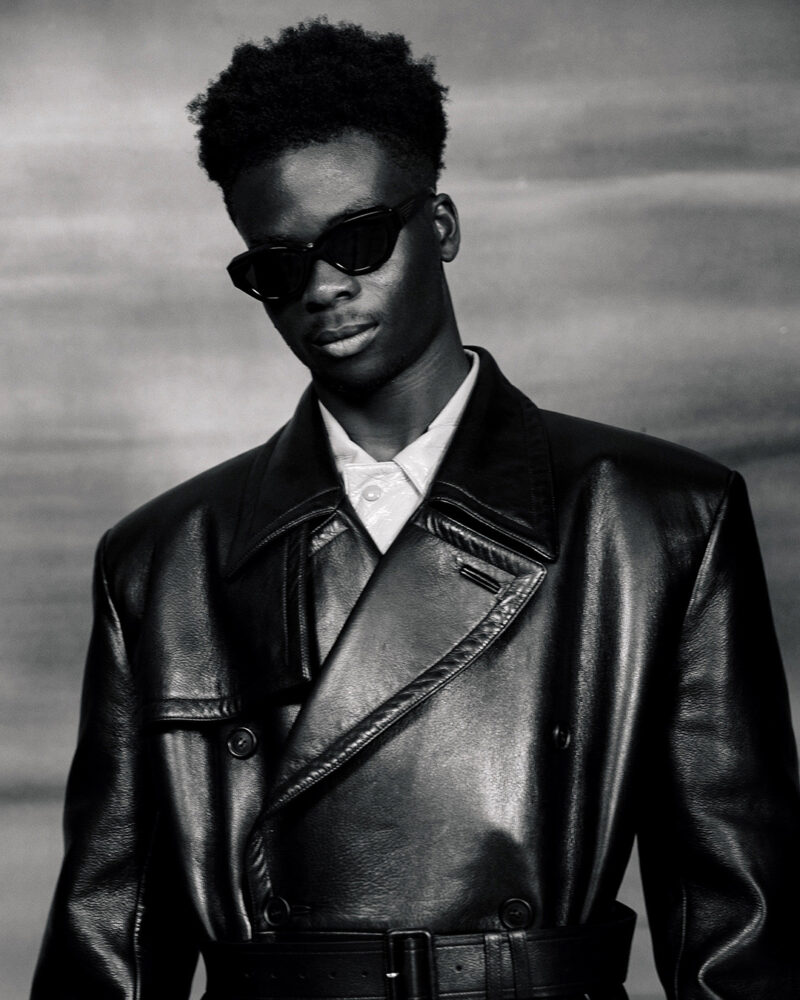 “Religion just allows me to keep faith that God’s plan is perfect, and therefore, there is nothing for me to worry about.”

You spoke about your move from Hale End to Colney briefly. Of course you played in countless games while in the Academy before this milestone.

What was the biggest lesson you learnt coming into the professional game?

To always enjoy it!

When you make that step up it can be a lot in terms of pressure – from the fans to the league table for example. You’ve also got a lot of competition in the team itself, as well as the external pressures you might feel from so many different people and places. It can sometimes make you forget the reason why you started playing football. Which is why it’s so important to always enjoy it because it is literally the best job in the world.

I can’t, and should never, complain about getting the opportunity to do what I love for a living. 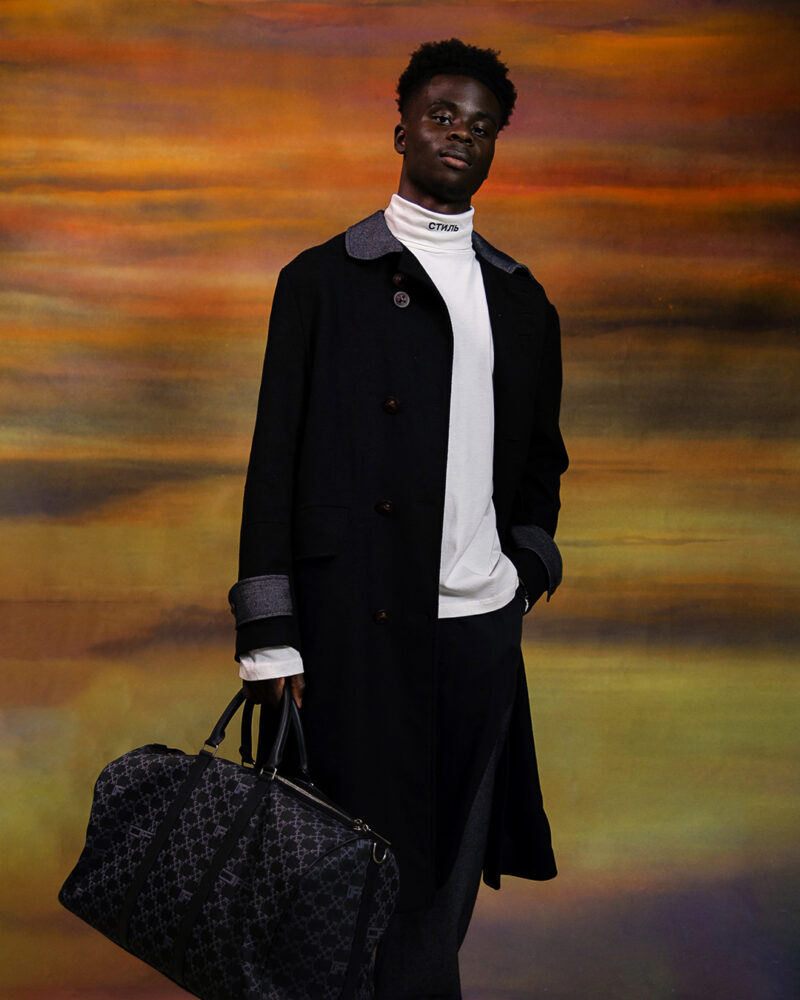 “When I scored my first NLD goal, wow. Being able to see my family and have them experience that with me, that was a moment I will never forget.”

What is so special about Arsenal? Why does this club mean so much to you as both a player and a person?

Arsenal means everything to me.

I’ve spent more than half my life as an Arsenal player! The club is a part of me, and it always will be. I’ve grown up here, I’m continuing to mature here. I’ve had so many great memories with this club, and I’m about to make so many more.

Thinking back, do you think there’s anything you would have done on this journey differently?

Absolutely not. Everything I’ve done up until this point I’ve learned from, and it’s made me who I am. I honestly wouldn’t change anything.

What does the future hold for Bukayo Saka, what’s on the ‘New Horizon’?

Winning. I want to win as much as possible with this club.

I want us to win trophies and continue to make history because that’s what Arsenal deserves.