'Pitch, Please!' is a campaign from adidas, Powerleague and VERSUS that unlocked access to football for a new generation of players. Following the biggest summer in women’s football in history, we provided free pitch space to women, girls and non-binary players all throughout August – but the work doesn't stop here. As we count down towards the new domestic season in the women's game, we're linking up with some of the most influential grassroots communities in the game to talk about why it's so important for more communities to have somewhere safe to kick ball.

Romance FC needs no introduction. Founded in 2012, the team has become one of football's most influential collectives by providing a home for creative women and non-binary players to kick ball and build opportunities on and off the pitch. As a group of stylists, writers, designers, musicians and more, it's no surprise Romance FC is pushing the boundaries of what a grassroots club can achieve – look at 2020's kit drop in collaboration with Pharrell and Humanrace for no further proof.

And while this club's fashion-forward aesthetic has never failed to make waves, its ethos of inclusivity is what has made it mean so much, to so many people, for so long. 10 years in, the team is still leading the conversation on how to make women and non-binary players feel like they can be themselves in football. After the most important summer for women's football of all time, we linked up with Romance FC's manager Trisha Lewis to find out why finding football was so important to her, and why it's essential we find safe spaces for the next generation to play the game. 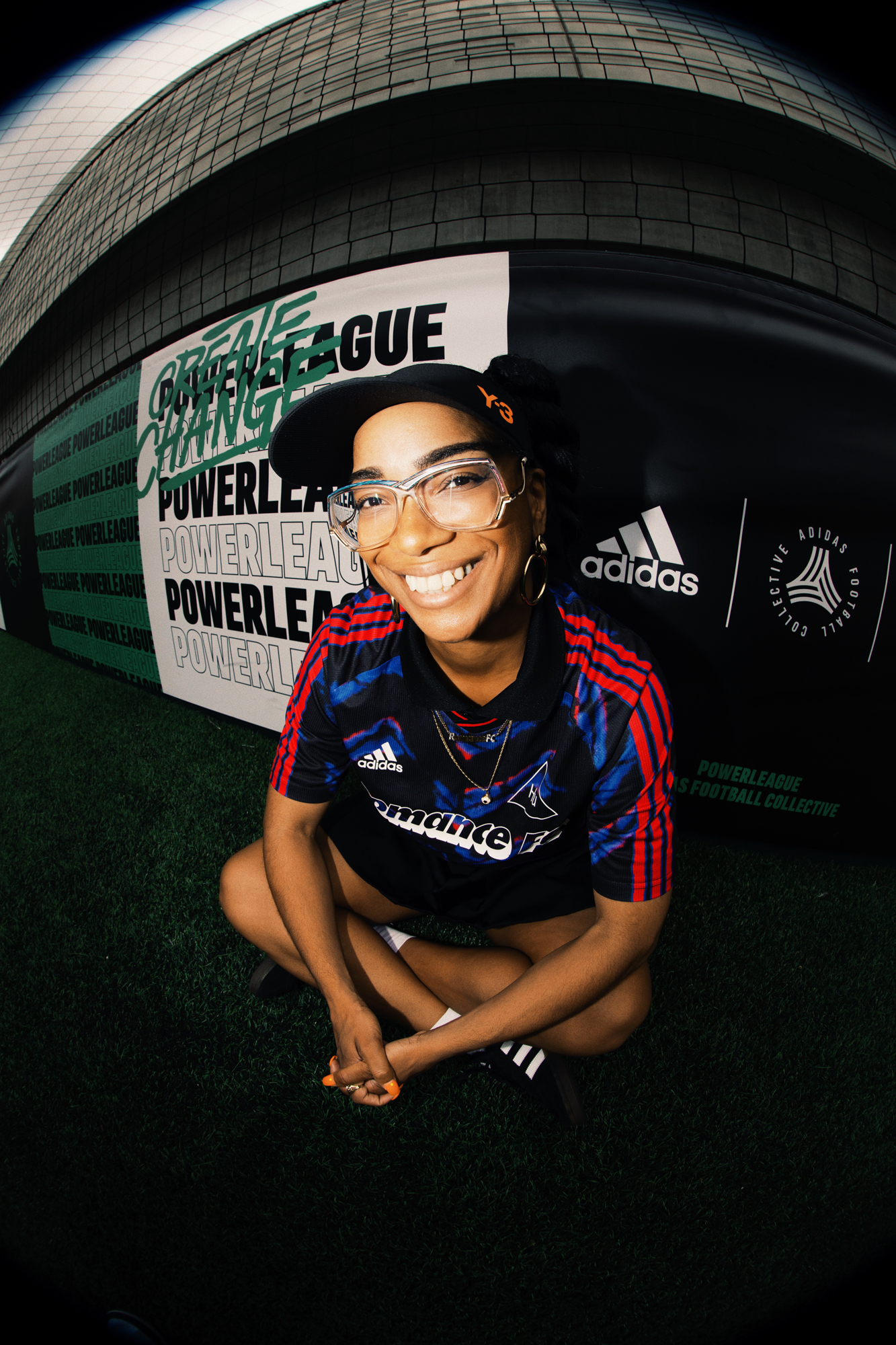 VERSUS: Where did your love of football stem from?

Trisha Lewis: I think my love of football came about probably when I was six or seven. My mum was a huge sports fan, not active, but she watched every single sport possible. The World Cup was always considered to be major family bonding time in our house – where we would just sit and watch as much football as we could. My mum was also a big Brazil fan, and in a lot of ways, my first introduction to the game was through watching the likes of Roberto Carlos and OG Ronaldo.

When did you start playing?

I actually got to play football in Secondary School.

Did you! That’s such a rare thing to hear someone, a woman, say.

I started playing when I was a little older, 13 or so. I’ve always played sports: netball, hockey, athletics. I was just one of those people who could pick up a sport like ‘that’. I never really gelled with academic subjects in school, I was always more a creative type and loved sport. I grew up actually wanting to be a professional athlete – I wanted to go to the Beijing Olympics. 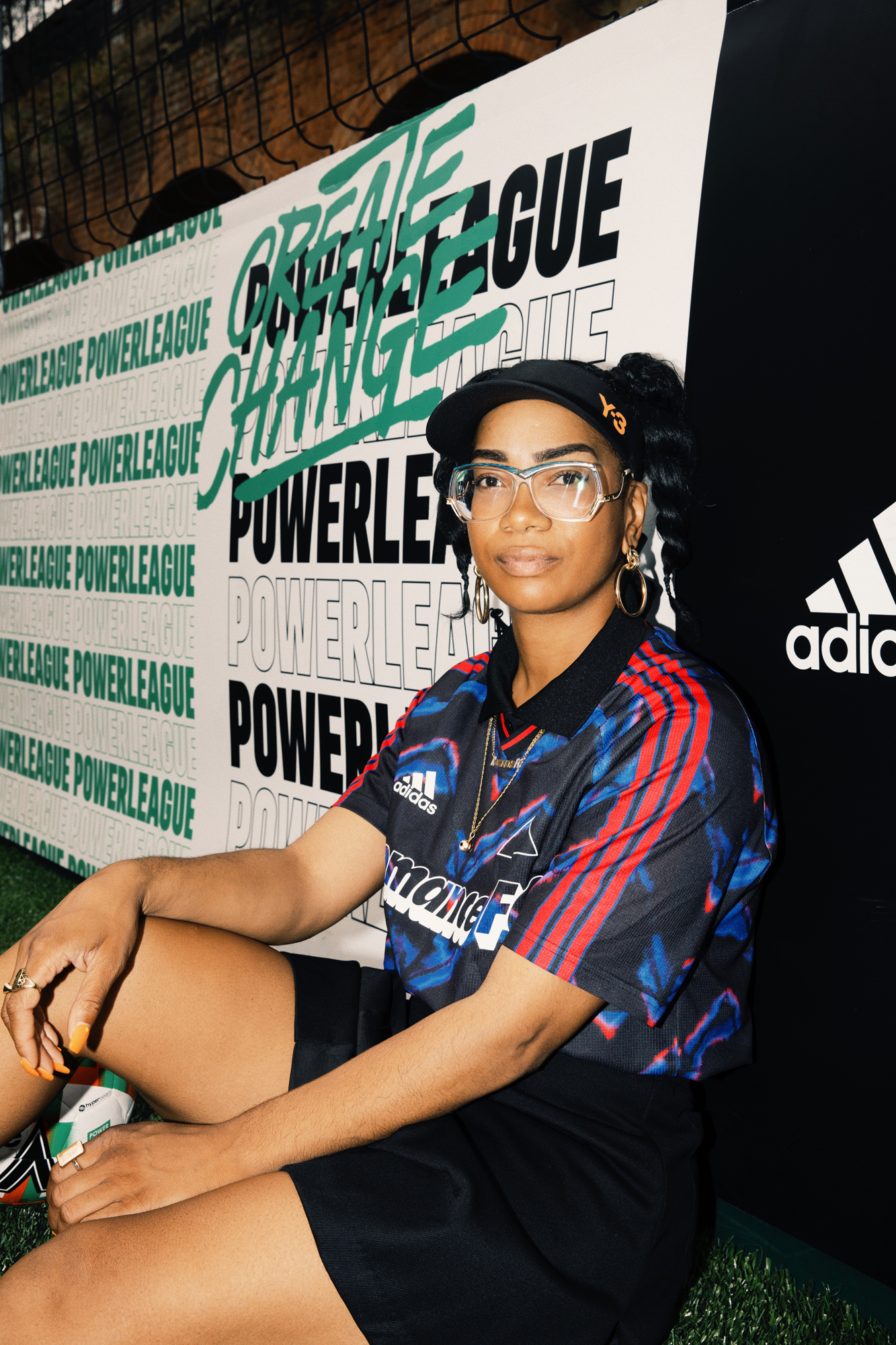 That is some determination. To realise you wanted to pursue a career as an athlete and participate in an Olympic Games.

I’ve always been competitive. There’s a bit of an age gap between my siblings and me. My older brothers would practise WWE wrestling moves on me. “Stay there Trisha so we can do a Suplex!” And I’d take it. I always gave as good as I got, and it made me quite boisterous. I was fearless. I’d ride around on skates, run faster than them – even if it meant falling over. That’s where my competitive nature stems from I think.

I was competing in athletics and representing the South of England but I picked up an injury and then I couldn’t run anymore, and I felt really lost. I remember speaking with a careers advisor at the time and they just didn’t know what to recommend. At the time my friend’s mum ran a local team that was a couple of minutes from my house, and I remember turning up on to this really muddy pitch, and seeing a group of girls in massive, totally oversized, deep purple kits – we were sponsored by a local bar called the ‘Purple Turtle’. I sort of just got thrown into the net, having never done goalkeeping before…

When did you start Romance FC?

I didn’t really know anyone in London and felt like a small fish in a big pond, and music has always been an outlet for me to express myself, I always felt safe in those spaces too. People who attended those raves and gigs, it always seemed to me we thought the same about things the same way – we think a little differently to the status quo, and always seem to seek more from whatever situation we’re in. I’ve just always felt like I fit into that environment because it’s one that just accepts you for who you are, and that’s the beauty of bringing so many people together through one common interest. You can feel a part of a community. 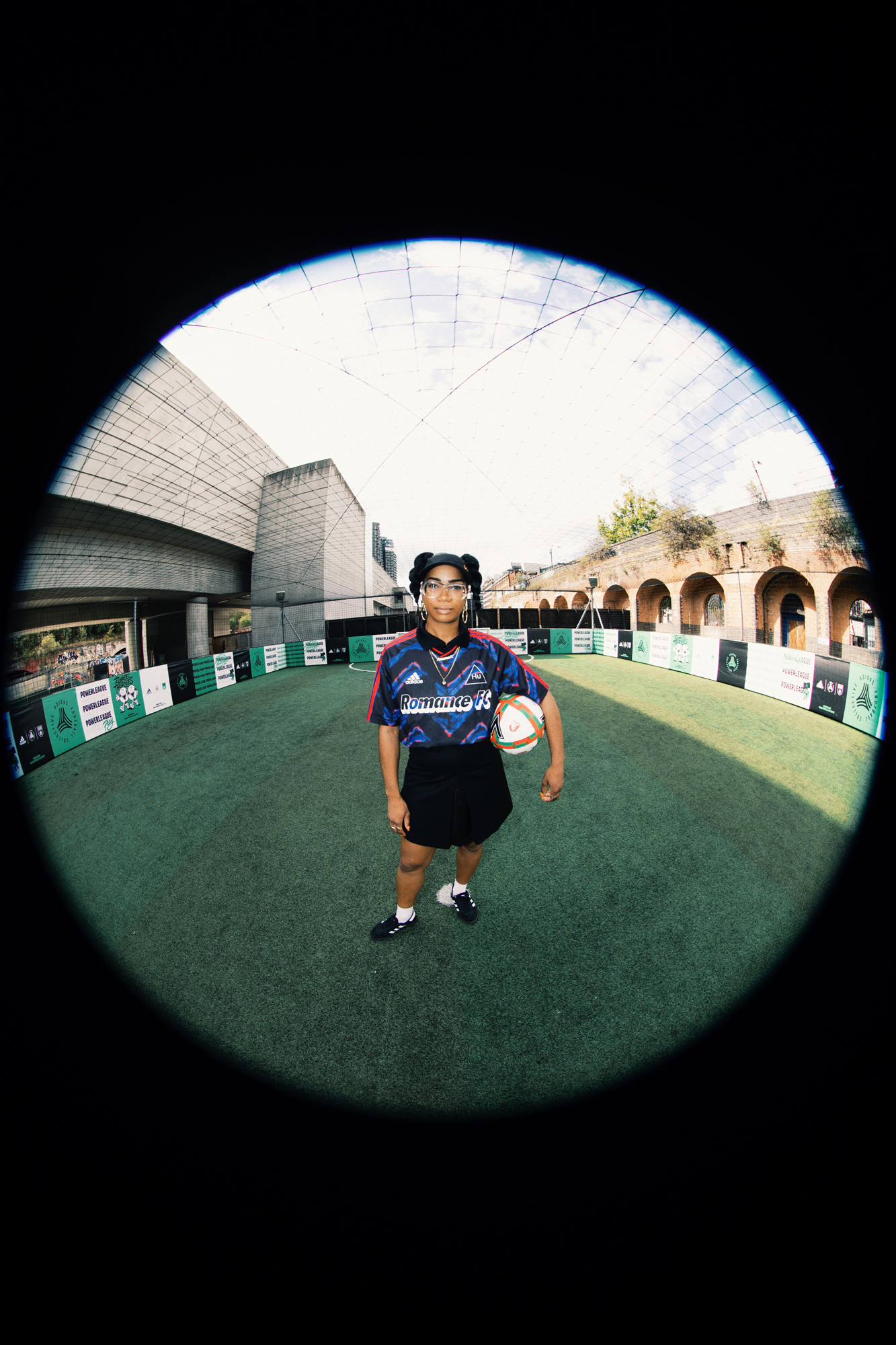 Is that what made you want to start Romance FC, that sense of creating community?

In a lot of ways, yes! We started playing football as Boiler Room Ladies back in the early days of the business, when there were 20-30 guest attendees max, and they were keen to have a women’s team because they had some leftover money from sponsorship, which meant we didn’t have to pay for pitch space. But, when that money ran out, the men’s team ceased to exist as Boiler Room FC…but we wanted to carry on because we loved it so much! At the time we were happy to pay for a coach and a pitch ourselves, but this was also during the summer when we didn’t always need to rent a pitch and prices were fairly reasonable. It just got to a point where we were being out-priced everywhere we went though.

Has pitch space been an ongoing barrier for Romance FC?

For the last decade, yes. At the moment in time we are really lucky with the space we have, but we have it after years of searching and developing relationships with local gyms and organisations. Like I said, we started playing on grass pitches during the summer which is fine! But then more people started coming, the summer nights were ending…it just became too expensive for us to access a space big and convenient enough.

In terms of safe spaces, is that something you’ve struggled to find as a collective made up of women, non-binary and trans people?

Yes! As soon as a venue had a change in management, our pitch deal got revoked and we had to start all over again. There have been times where, if we were a minute over our allocated time, we were chased off the pitch. Once even by a Doberman! There have also been times when a group – usually men – think they can barge us off the pitch. Double-bookings are the worst in that instance, or when our time’s been changed and we haven’t been told – when people act like that, it’s like they think they own the space. 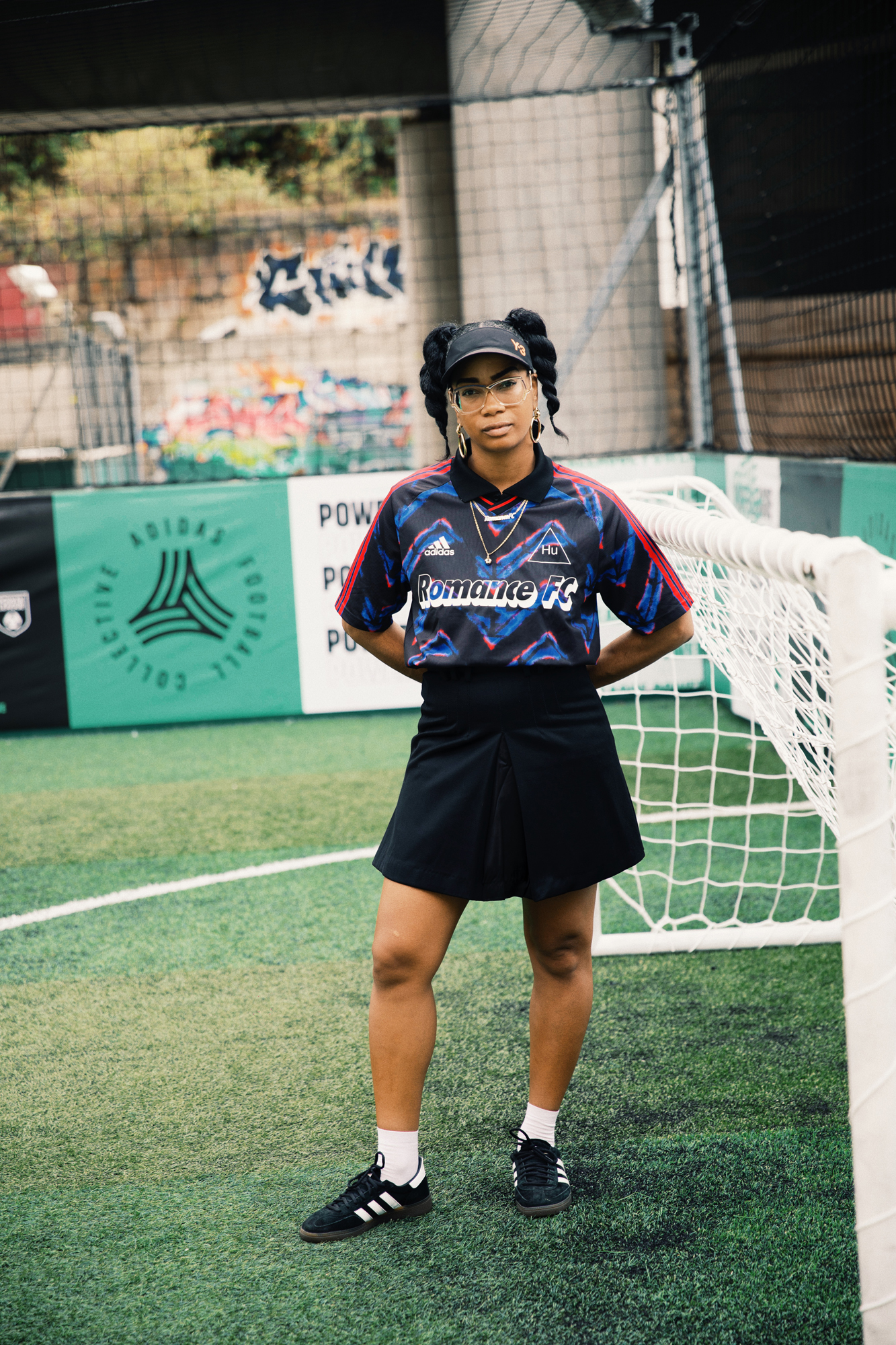 Have you ever seen a group of men do that to another group of men? Ultimately, do you think they’ve treated you and Romance like that because you’re women?

I think so. The clear disregard and lack of respect for us – who are also playing a game we love! – is infuriating and saddening at the same time. I remember I attended a goalkeeper training session not long after COVID restrictions lifted. It was in the summer, and the session was outside…

No! And that’s a whole other conversation, often the ones available aren’t suitable for women. There aren’t locks on the door, there aren’t any sanitary bins, there aren’t any mirrors – have you ever tried putting contact lenses in without a mirror? As a keeper it’s quite important you’re able to see!

Where did you get changed for this session then?

I found a space near a floodlight, so I set up there. Within minutes a group of men shoved all their kit around me, parked their bikes up against me, and started to get changed. They could see I was trying to get changed as discreetly as possible, but didn’t care.

Sometimes their prescience in a pitch or football environment is enough to put people off attending. In that instance, my coach – who was a man – said: “That really pisses me off! They could clearly see what you were doing and chose to walk right through you, it isn’t okay.” So, the concept of ‘safe space’ isn’t something only women or people from marginalised communities understand or recognise. 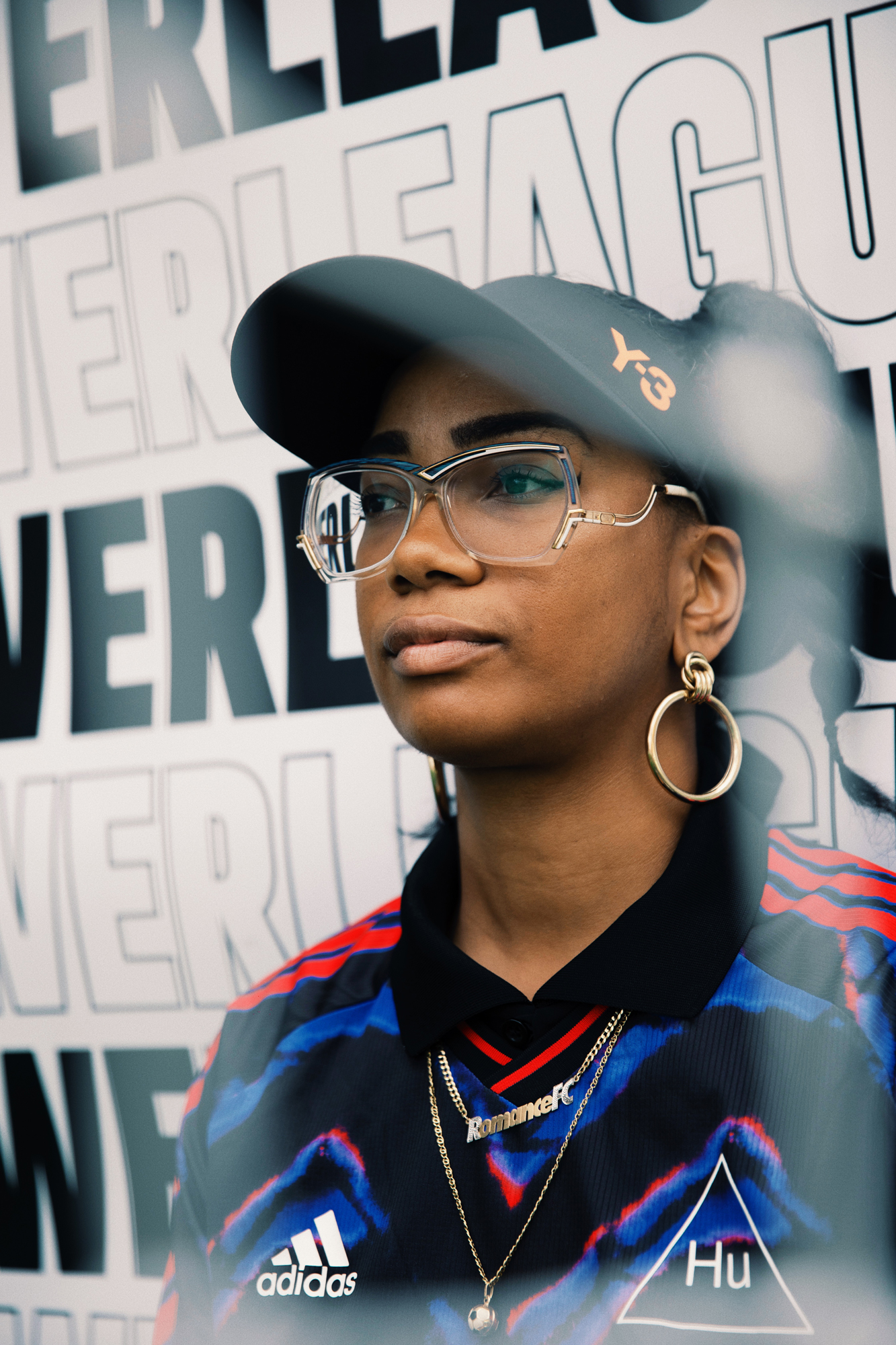 In terms of cost and finances, that seems to be a huge barrier when it comes to accessing a space to play.

As Romance, we’ve always wanted to remove as many barriers to people accessing football as much as possible, including money. We have a ‘pay it forward’ scheme where we ask people to pay what they can afford, and any extra goes towards someone who needs that little extra support. It’s really difficult to ensure that happens when it costs thousands of pounds a year to simply play on a pitch.

What do you think can be done, by brands especially, to help create safe spaces for collectives like Romance FC?

Most of the time it boils down to money. Are you finding local community initiatives? Do you know what their needs are? Don’t simply find a collective or initiate and ‘tag’ onto it. Really understand what it is they want and represent. If these spaces are to be truly safe, we need to make sure the people in the room making the decisions really understand why they’re making them. That creates long term change. This isn’t an overnight issue to fix, and the more people who realise that, the better. Just because these are problems you’ve never experienced before doesn’t mean they’re not problems.

Romance FC is a member of the adidas Football Collective.