No one symbolises joy in football more than Adebayo Akinfenwa. Despite clocking 233 goals in his career with a play style that left countless defenders battered and bruised, Akinfenwa only preaches love over hate. Although he never played underneath the bright lights of the Premier League, he earned adoration for being one of the most charismatic and positive players of his generation.

From being recognised as the strongest player in world football to telling Jurgen Klopp to “hit him up on WhatsApp” in front of the world, this is a player who was never afraid to be himself on the big stage. There’s always been beauty in this Beast.

Now retired but no less loved, Akinfenwa has linked up with Jameson and Lover’s F.C. to front a new collection of jerseys that’s all about celebrating the joy of international football and its power to bring the world together. Combining football, fashion and whiskey, the release sees iconic shirts from England, Germany, Holland, Brazil, Argentina and Ireland’s catalogue reworked with Jameson insignia.

Speaking on the drop, Lover’s F.C. founder Neal Heard said the power of football kits to symbolise our love of football remains undefeated: “The one thing I know from experience is that there are no more important football shirts than those worn at the World Cup. The best thing about the tournament is that the whole world is watching, people are sat in bars or around TV’s from Bangkok, to Rio, to Dagenham – all glued to those teams and those colours. These moments and the shirts stay with us and connect us forever.”

To mark the release of the new Jameson x Lover’s F.C. collection and to dig deeper into the power of football, we linked up with Adebayo Akinfenwa to talk football shirts, World Cup memories, and why football is the ultimate vehicle for unity. 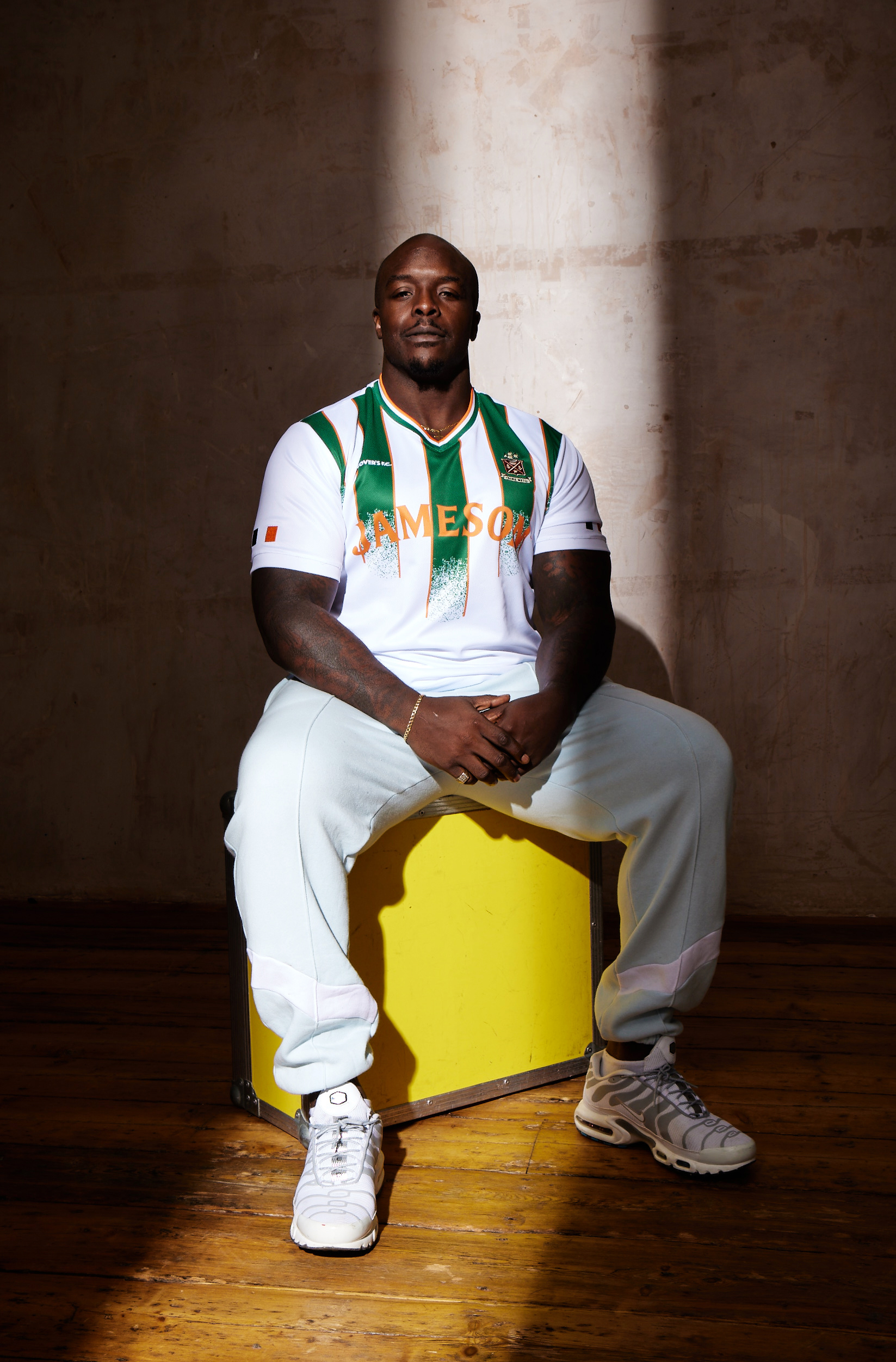 VERSUS: What memories does this jersey evoke for you?

Adebayo Akinfenwa: You know what, I don’t think this game was a World Cup fixture, but there was a Republic of Ireland vs Brazil game years ago – I’m talking about when I was a kid! – and Ireland ended up winning 1-0. I think it was an international friendly, but I just remember the celebrations from the team and the fans. They. Went. Crazy! The team were wearing their iconic emerald kit for that game, so the colours were slightly different to the one I’m wearing today, but the classic combination of green, orange and white that are incorporated in this Lovers F.C. x Jameson collab, screams heritage. This shirt also reminds me of Clinton Morrison.

For me, I just think of Roy Keane, straight away…

I know, I know! But that passion you’re talking about, he encapsulated that as a player perfectly, especially when he played for his country.

Definitely, and a competition like the World Cup brings that pure love for the game out in players, it’s another reason why people love it so much. 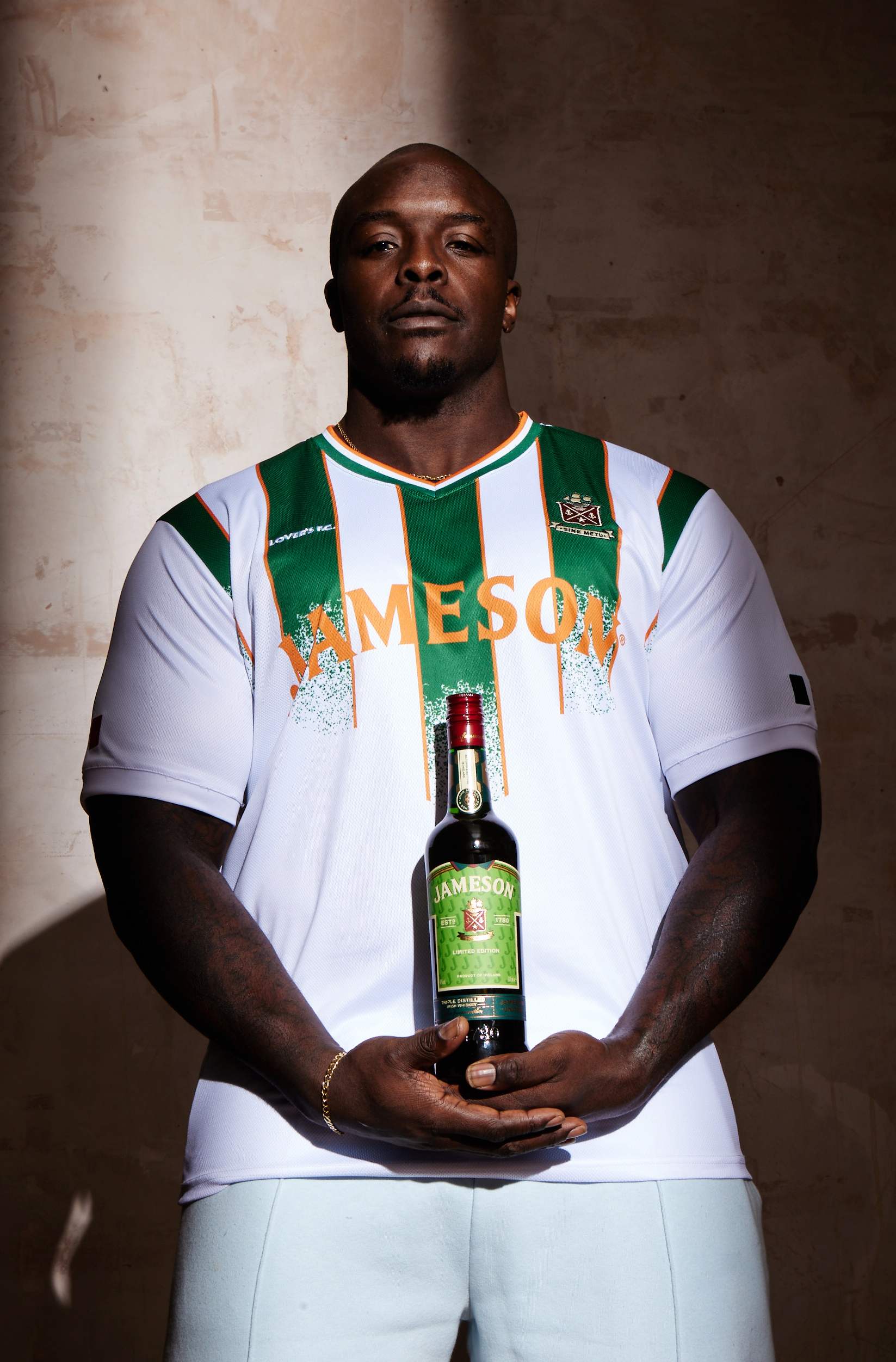 Touching on that, what does the World Cup mean to you?

I was actually speaking about this recently with my parents. We were talking about the 1994 World Cup in America and how Nigeria played in that competition.

The reason why ‘94 has stuck with me so much is because I have really vivid memories of watching those games in our kitchen with my whole family, and I remember my mum in particular getting really into it – and she’s never been the biggest football fan! But I remember being in that kitchen with my aunts and uncles watching Nigeria, and I looked over to see my mum properly getting involved. “Get up! Move quicker, be stronger, come on!” she was actually shouting at the telly, telling the players what to do and I remember thinking: “you’ve literally never, ever spoken about football before!” – but that’s what the World Cup can do. People who aren’t ‘regular’, everyday fans end up loving the game, even if it’s only for those four weeks or so.

I remember we would sit down and schedule the games together as well, and that’s one of the beautiful things about the World Cup, it brings people together.

I absolutely love that! That’s something a lot of people can definitely relate to, watching matches with colleagues you don’t really know outside of work, or family members who’ve never expressed an interest in football. Like you said, that’s the power of a competition like the World Cup. In terms of global culture, did the World Cup change how you viewed that?

For me, it just cemented what football does, you know? It has power to create unity on and off the pitch. I fell in love with the game at the age of six, and it was because of the passion it brings out in people, and its ability to create joy.

Wherever the World Cup is held, it brings people together and a big part of that is getting to see other people’s cultures. The interaction between fans from different countries and walks of life is a great thing to witness. The colours, the music, the food. It’s all brought to the forefront of people’s lives because of this competition. The world is such a big place, and it’s like the world comes together for the duration of this competition, and that’s such a powerful thing to experience. 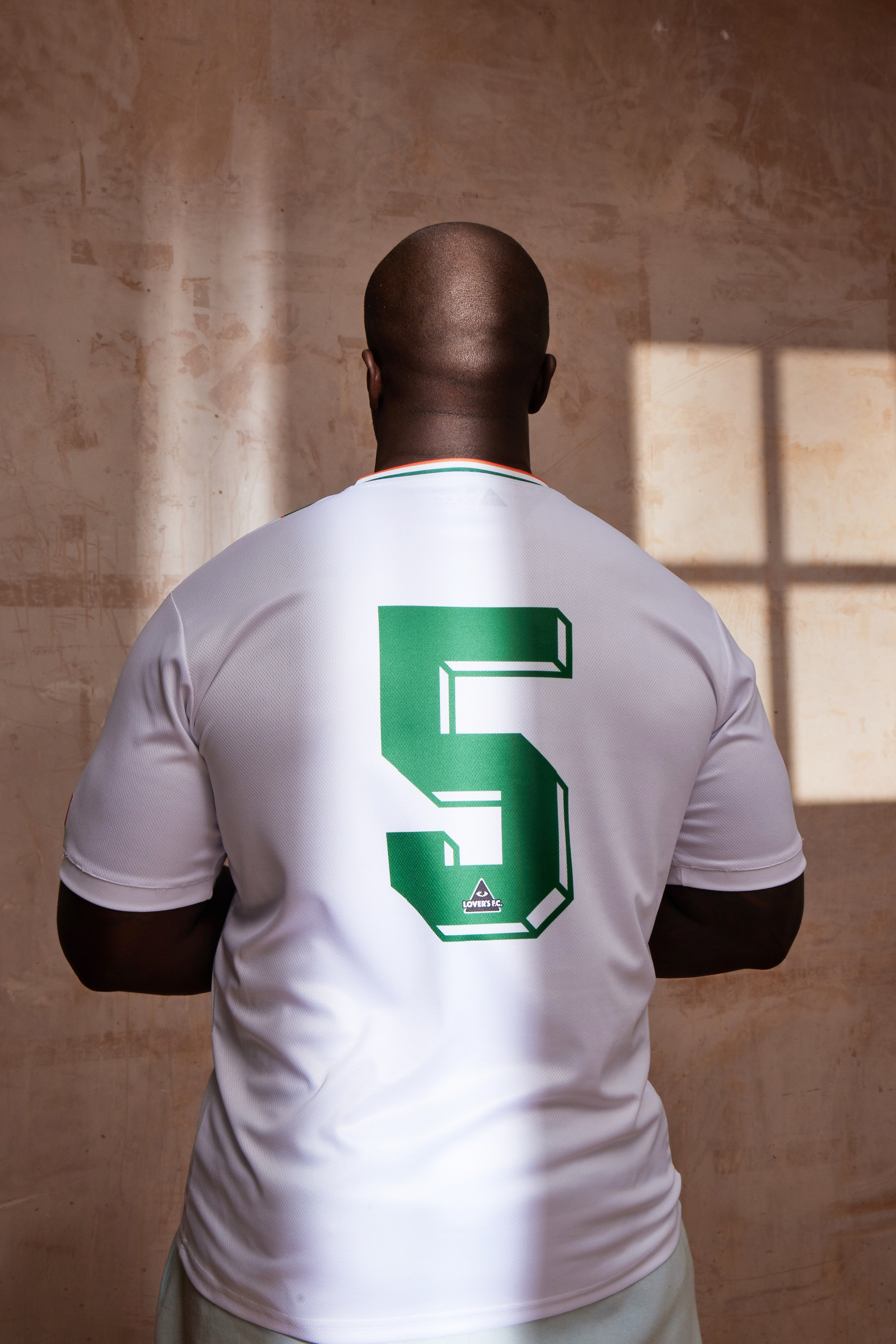 You’ve just mentioned music and food. It seems like the three things that have the power to create widespread unity are: music, food and sport. Especially football. Would you agree with that?

Absolutely. You have these individual-type moments that take place in sport, like the Super Bowl for example. And don’t get me wrong, that is a big sporting milestone in people’s calendars, but the World Cup eclipses that. The whole world literally stops to focus on this one competition. Everyone’s eyes are on the game and for a brief moment in time, people have a shared interest. There’s so much joy associated with the World Cup, seeing people rep their countries, walking around the streets in their kits. And if your nation gets knocked out, you end up supporting another team – usually the underdog! – it’s just like one big celebration. I just love it, and the fact it comes around once every four years makes it so much more special.

Outside of your own nation, which national teams will you be supporting?

Mmm…maybe Senegal. But look, England are going to get through their group and, fingers crossed, do quite well in this competition. I know expectations are a little lower than usual at the moment due to recent performances and injuries, but, I honestly don’t mind that because low expectations can be smashed. And these last few games aren’t a true reflection of what this England side are capable of. We reached the final of the Euros last year and in 2018 we reached the semi-finals of the World Cup. I’ve got to keep faith, and hope that we bring it home.

The collaboration with Jameson and Lover’s F.C. really epitomises the intersections of fashion and football. What does that mean to you?

Fashion has evolved with football, and nowadays, you can wear shirts on a night out with mates. We could never do that when I was younger, they were for playing the game and running around! The way shirts are made today, they just drop right. I did something recently where I had to wear an England shirt but also Argentina and Portugal ones. And I can’t lie…I thought to myself when wearing the Portugal shirt, “I could actually rock this, this fits nice!”

You were feeling yourself, yeah!

100%, it looked so good! You don’t necessarily have to just wear the shirt of the nation you support anymore. A jersey is just a jersey to a lot of people now, so if it looks good…wear it! 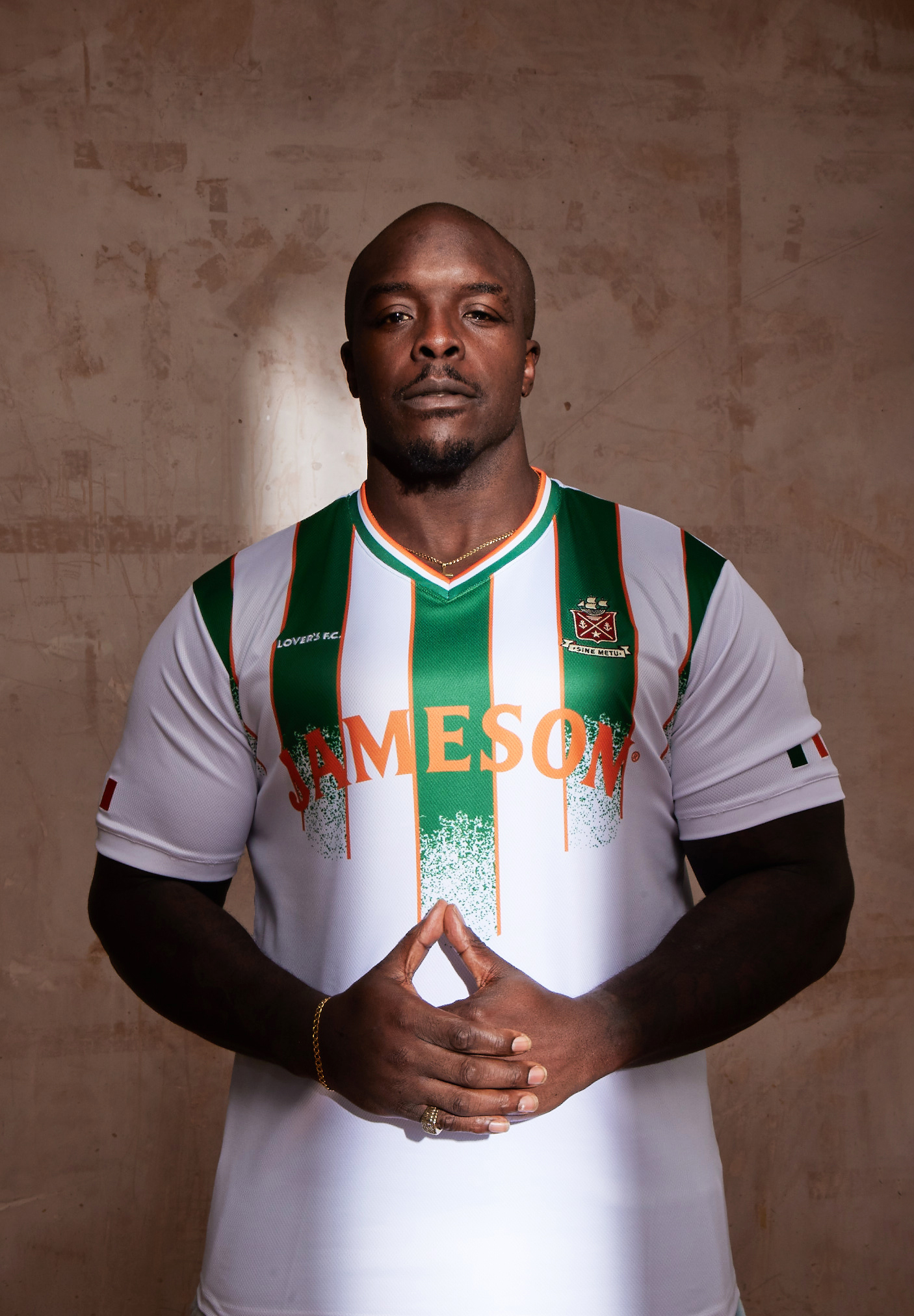 What do rate about the new Jameson x Lover’s F.C. collection?

They all drop nice because the fit is nice. The Brazil one, I love the colours. I’d wear that one with a nice pair of blue trousers.

Of course! Plus I’m a big fan of Alisson, so I can see myself wearing that shirt. I also like the fact that each kit is made up of different colours, they’re not bland and boring, they’re colourful and that’s especially important for a World Cup.

I quite like the idea of people wearing shirts because of certain players. You’ve mentioned Alisson there, but I’m sure you’ll have fans rocking Argentina shirts for Messi this month or France shirts for Mbappe.

Oh yeah, you can’t escape that. And the nostalgia that comes with certain shirts because of the players who rocked them.

People will see ‘The Beast’ in this Jameson x Lover’s F.C. Republic of Ireland shirt and will be wanting to wear it!

You know it! Come on! But if I’m wearing a Brazil shirt for example, I’m thinking about R9, or if I’m wearing a Nigeria shirt I’m moving like Jay-Jay Okocha. The iconic individuals who repped these shirts, who inspired you to play football or simply ‘be’ like that person, it’s powerful. And today, footballers – or the idea of a footballer – is always evolving. A lot of players take pride in how they look, and how they fuse that with football. A lot of people can relate to that, and how players dress or wear their shirts is something fans want to emulate. They’re role models. 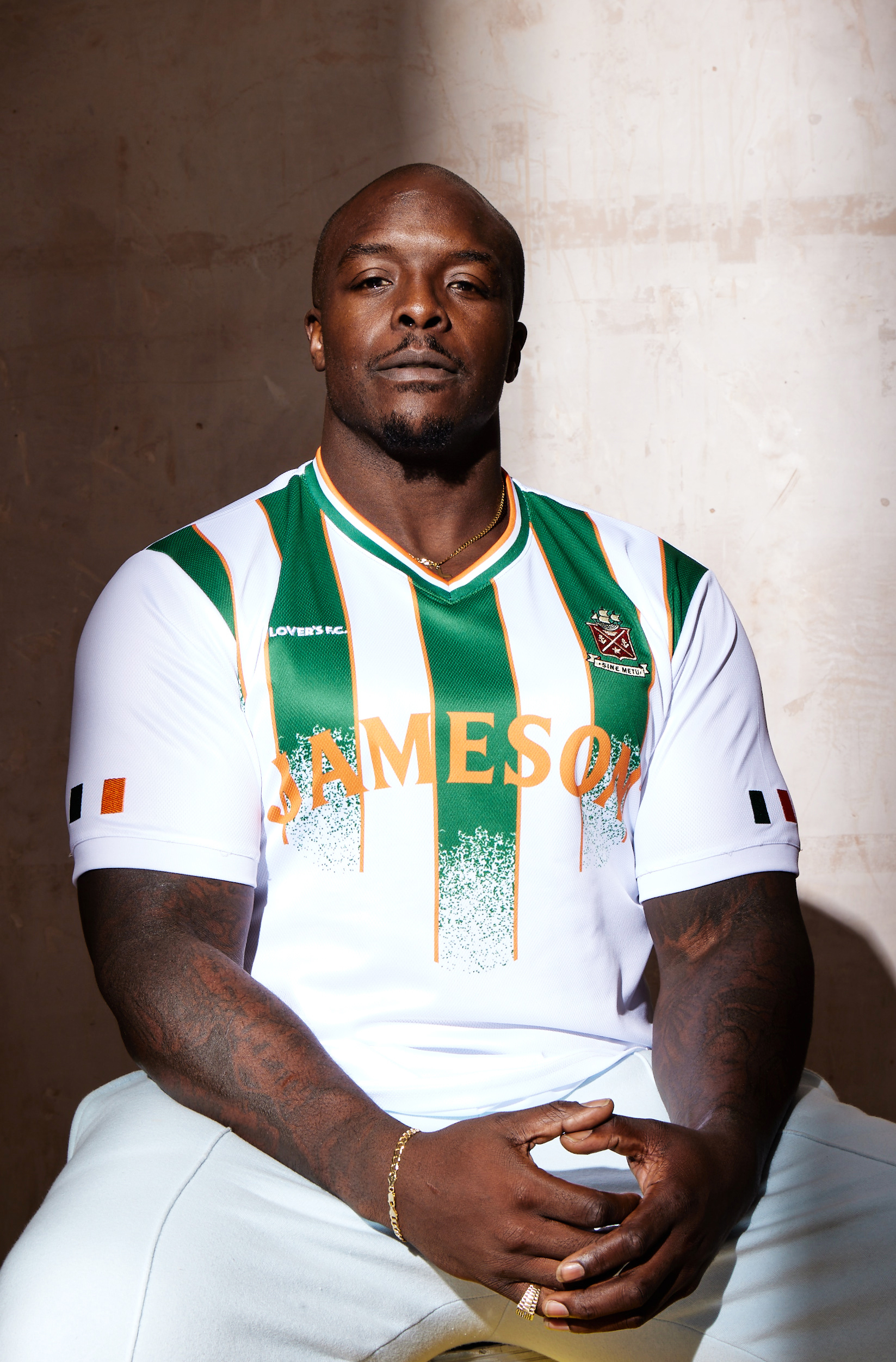 What iconic World Cup moment springs to mind when you think of the competition?

There’s a few! I remember my dad telling me about Schillaci in Italia ‘90, and how he went on to win the Golden Boot after nobody expected him to do something like that.

My grandad used to tell me about how he drove my Uncle to Italy – from Mile End, in East London – to watch England in that World Cup.

I was in Paris when that happened and the French were going crazy!

For me, I will always remember him for being one of the world’s best players. His performances will always outshine that moment, but look, this is what the World Cup does right? It gives us these iconic moments that will live on in football history.