In ‘What Ballers Wear’, we link up with the most exciting players in the women's game and catch a vibe with them while they dive into their wardrobes before flexing their coldest fits. In our next instalment, we meet up with Houston Dash and England forward, Ebony Salmon.

For those who might not know much about the 21-year-old Houston Dash forward, Salmon is one of English football’s brightest stars.

After three years with Aston Villa’s Academy, she was pushed up the ranks to the First Team, making her Barclays Championship debut in 2017. She was just 16-years-old at the time. A transfer to the newly formed Manchester United the following season, might have ended with a loan deal to Sheffield United but it was at Bristol City where Salmon began to make her mark.

During the 2019/2020 season, Salmon was The Robins’ top-scorer, bagging eight goals across all competitions to help the South West side avoid relegation. And despite upping her goal scoring tally in 2020/2021 - notching up six in the league, alone - it wasn’t enough to single handedly keep City in the Women’s Super League. Fast forward 12 months or so, and Salmon was named Houston Dash’s topscorer for the regular season and helped her Texan teammates to their first-ever NWSL play-off. What a difference a year makes.

Off the back of an impressive season in the States, Salmon was called up to represent the Lionesses under two-time Euros winner Sarina Wiegman. And when we linked up with the young baller, just two weeks previously she’d redefined the term ‘super-sub’; coming on in the 77th minute as a substitute, Salmon teed-up fellow youngster, Jess Park, for a brace against former World Cup winners, Japan. 13 minutes is all it took for her to ball-out. A number unlucky for some, but superstition plays no part in Salmon’s game. It’s all about skill when it comes to ES23 - she’s clearly in her Jumpman-era. We’ve all heard of a ‘fox in the box’, but this Wolf from Wolverhampton is looking to tear up the backline like no other striker in the business, past or present. The girl from the Midlands is anything but mid, and we had the pleasure of sitting down and chopping it with her whilst she was back visiting family over the festive period.

VERSUS sat down with Salmon for our next instalment of ‘What Ballers Wear’ to find out how she defines her own style, how living and playing the ‘beautiful game’ Stateside has helped to develop her gameplay and what she hopes for the future of women’s football post-Euros. 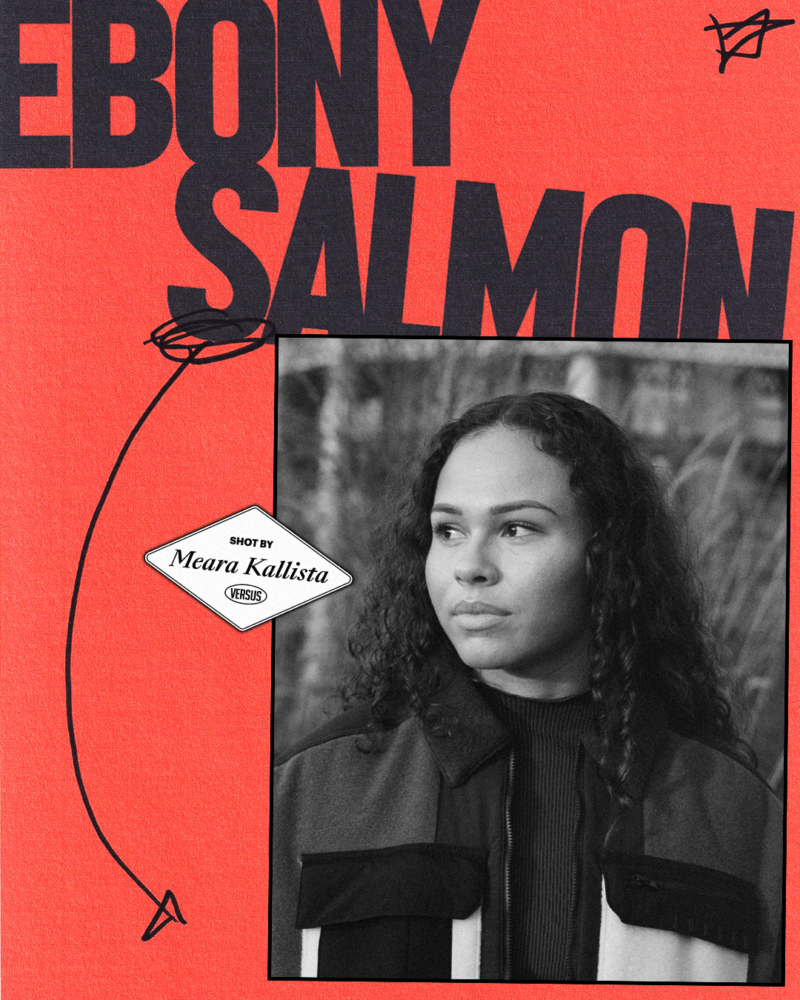 “I think they’ve forgotten half of my order…oh well!” Ebony Salmon nonchalantly says whilst looking into the crumpled bag that should have contained her Nandos order. “They do actually have Nandos in Houston, Texas!” she says rather surprised as she sits down to eat her lunch before a full day of outfit changes and chat. And for the chicken connoisseurs out there: Ebony Salmon is a boneless thighs kind of girl.

Salmon is possibly one of the most chilled yet warm individuals we’ve had the pleasure of linking up with in recent years.

Despite her age, Salmon thinks before she speaks to ensure she answers our questions with the utmost consideration, a skill even the most seasoned vets haven’t yet managed to acquire let alone hone. “Mmmm…I think the most important thing to me is making sure I am buying and wearing things I feel comfortable in.” Which makes sense considering she’s chosen to wear an oversized, brown panelled ‘Cosy Girl’ Jordan shacket for her first look. “I wouldn’t say I have a specific style, as in: I’ll only buy one type of thing and that’s it! I am quite open when it comes to trying new things, like today for example. I’ve chosen bits that maybe I wouldn’t normally wear on an everyday basis but that doesn’t mean I don’t like them. Sometimes it’s just about being able to put things together and seeing them in front of you. But, so long as I’m comfortable, I’m happy.” 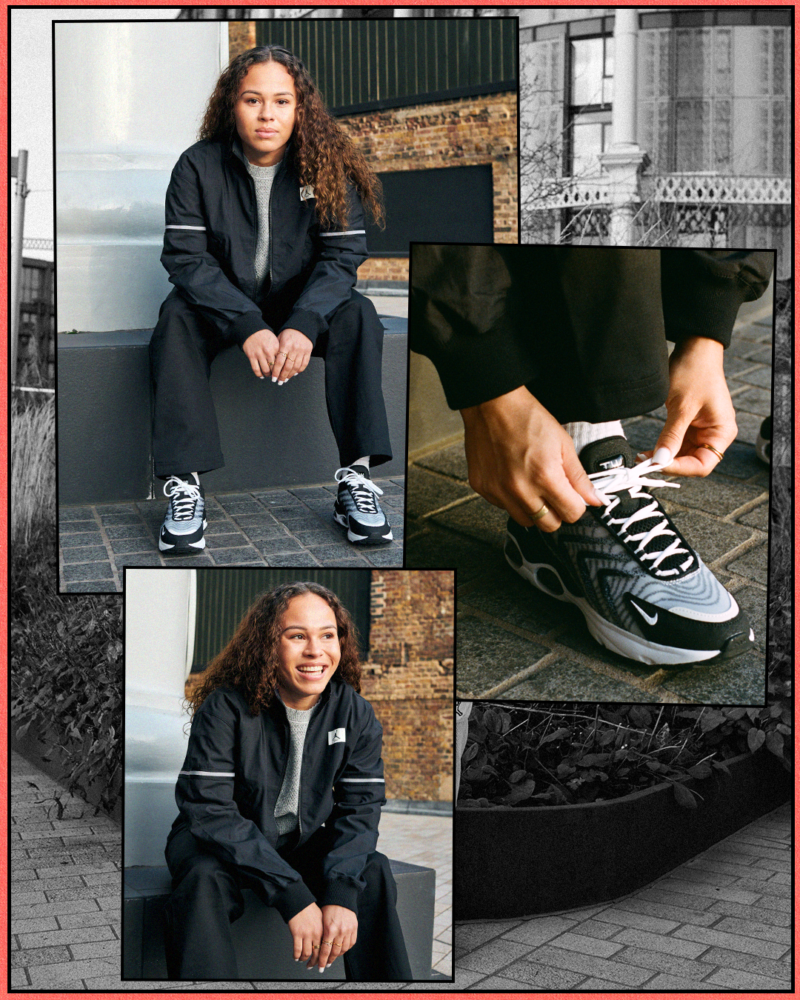 It’s that type of openness and willingness to try new things that had us wondering about Salmon’s move to the States. Why did one of England’s most clinical strikers decide to move to the other side of the world, at such a pivotal point in her professional career? “It wasn’t ever really something I thought I was going to do in all honesty”, she says whilst flexing a pair of Air Max 97, ‘Brown Mars Stone’ – the perfect sneaker to pair with the Jordan x Maison Château Rouge brown synthetic leather trousers Salmon’s donning for her second outfit. “I first spoke about it with my agent, and they asked if moving to America and playing in the NWSL was something I’d ever consider. Funnily enough, I initially said “no” when they asked, and that was that!

“It just felt so far away and it was never really a part of ‘the plan’ – it just never sounded like something I wanted to do. But, as time went by, it did seem like a more realistic option in regards to playing-time. There were risks involved, but thankfully those risks have paid off and I’m really enjoying it! Plus, I think it’s helped me to develop my game in a way I don’t think I would have been able to here.” 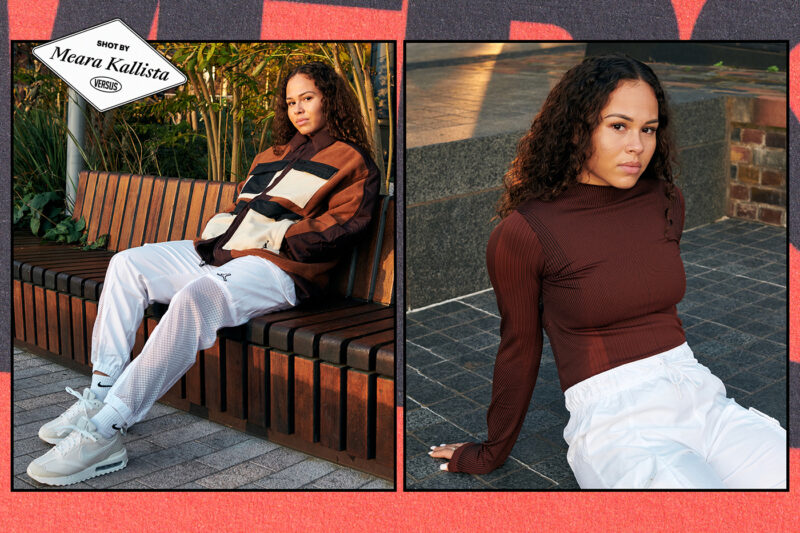 When asked whether her move Stateside has helped to develop her as a person, Salmon takes a moment before answering – something we’ve now come to both expect and appreciate the more time we spend with her. “I had to live away from home when I played football in England, the only difference now is…I’m more than a two-hour drive away! So in that sense, I’m ‘used’ to not being at home with the people I love most in the world, but living in a different country – one that is quite far away – I’ve had to become more independent and I’ve had to make myself grow up perhaps a little more than if I were to have stayed in England. That’s not a bad thing, though.”

For Salmon’s third and final change, she requested the Nike Air Max TW in black, one of the latest AM iterations – fronted recently by fellow-Nike athlete, Eduardo Camavinga – and matches perfectly with the black Jordan Flight two-piece ES23’s also selected. Underneath her zip-up we also noticed she’s chosen to wear the Nike Forward sweatshirt, a piece that uses recycled materials and a lower energy process during construction – a prime example of Nike’s determination to be the most sustainable brand in sport. “The material feels really nice! I also thought the colour and texture went really well with something quite ‘simple’ like this tracksuit.” Not only are her answers considered, but so are her fit choices. When asked if her outlook on fashion has changed since being exposed to the now iconic NWSL gameday fit rotations, she says. “Sometimes when people are talking about what outfits they’re going to wear, you might find yourself thinking: “okay, well…if they’re going to turn up in a GUCCI suit or heels, then maybe I should wear something other than a tracksuit!” But there’s never any pressure to change what you’re wearing. It’s more about being comfortable with who you are and showing that through the clothes you wear.” 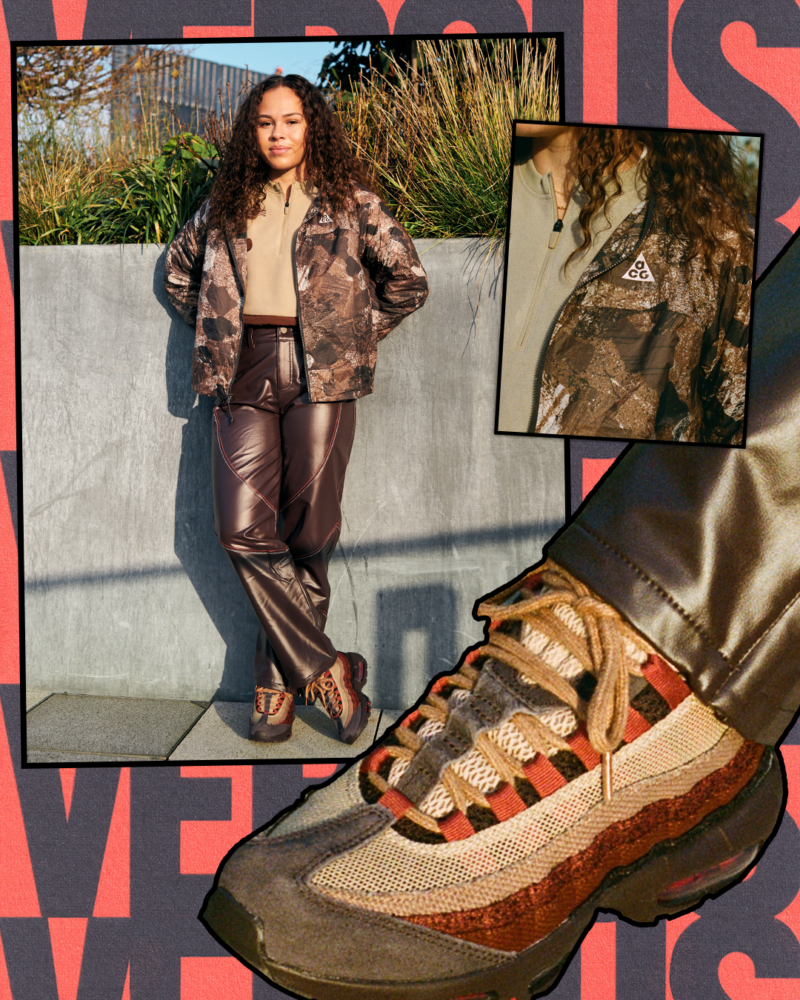 The idea of being able to play your own game, and express yourself off the pitch as much as on it, is something Salmon speaks about passionately during our time together. And when asked whether she thinks the role of fashion in football has changed in recent years, she naturally includes the notion of ‘expression’ in her response. “I think nowadays players are more comfortable expressing themselves off the pitch compared to 10 years ago, and there is some level of expectation that they do that, too. One of the most accessible ways for them to showcase that is through what they wear.

“You asked me earlier who dresses well in the England set-up and I said Leah Wiliamson and Keira Walsh. A decade ago, people might not have even known how Leah or Keira dressed because their stories weren’t told outside of football. Now, footballers are more than athletes, and fans want to know how they dress and what’s important to them other than football.” A point that brought us nicely to our final question of the day: what are Ebony Salmon’s hopes for the future of the women’s game? 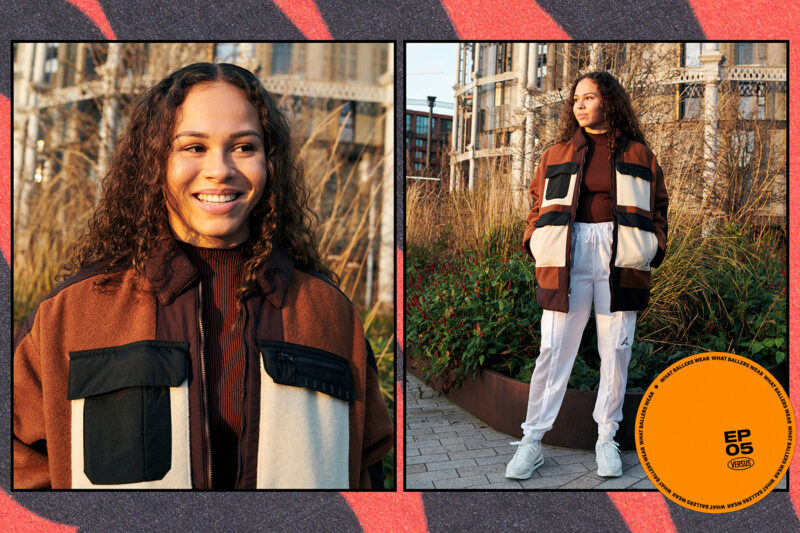 “I think women’s football has come a long way, but I think there’s still a long way to go. We’ve seen more fans attend games and the media is covering the sport more than ever before, but we want more as players. We want consistency. It’s great that thousands attended matches last summer for the Euros, and millions tuned in at home but we need to make sure we have those figures all-year-round, not just during major tournaments.”

It’s clear that Ebony Salmon will never be satisfied – unless we’re talking about Nandos – and that’s one of the myriad of reasons why she’s not only an elite athlete, but an incredible individual. It’s a no brainer really why she’s now a burgeoning Nike superstar and the future of English football. 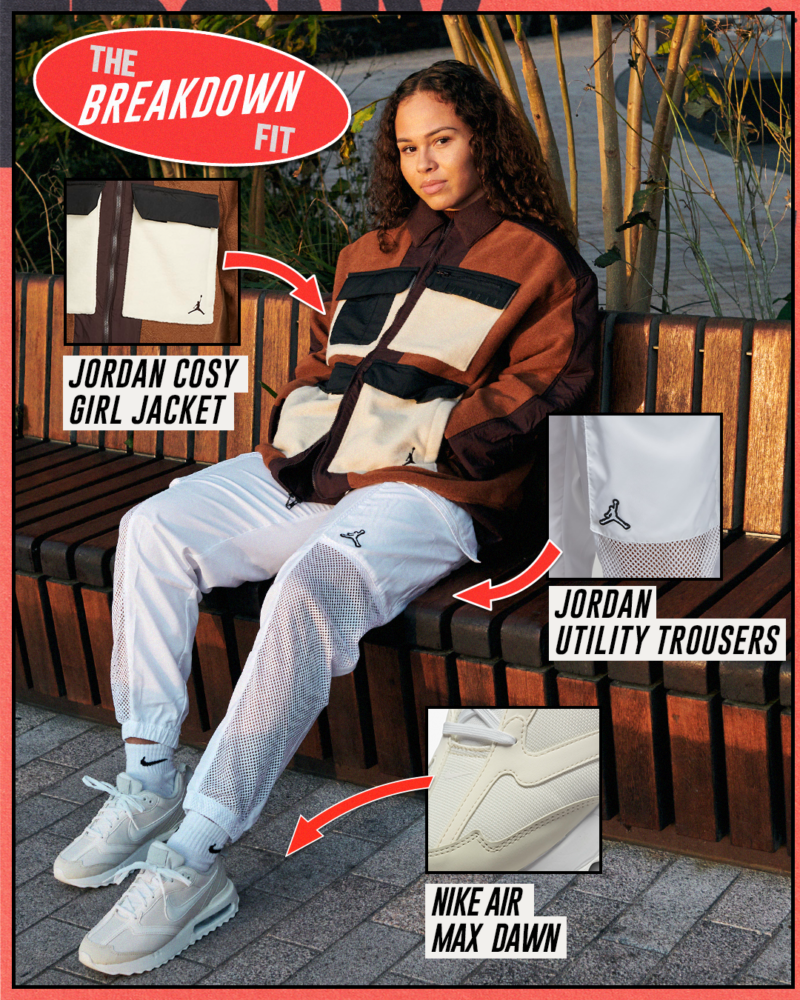