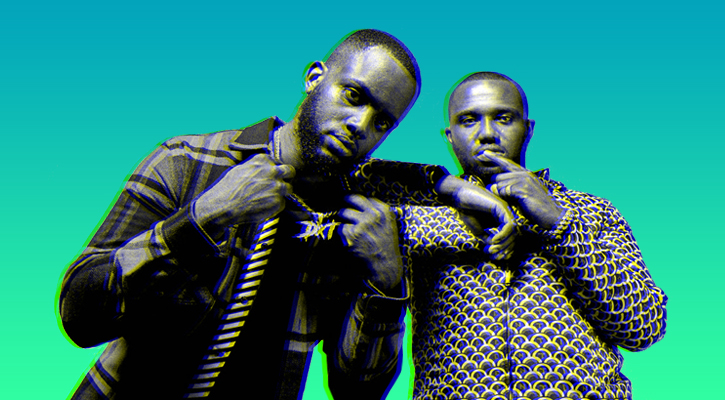 Unless you’ve been sleeping for the past couple of years, you’ll know full well that Headie One and RV have been doing the most for UK drill. The pair have formed a devastating strike partnership that has seen them link up to lethal effect on two standout ‘Drillers x Trappers’ tapes and across a flurry of other hard-hitting heaters on Headie’s solo projects and OFB tracks.

There’s a few things you expect to hear every time you tune in to a Headie and RV track. Heavyweight production from the likes of M1 on the Beat, Mazza and Ghosty (to name but a few) goes without saying. One-liners and word play from the pair referencing street politics and point-scoring is also always assured. And more often than not, you’ll likely hear a baller-inspired bar or two from the pair, who love flexing their knowledge of the game alongside their antics “in the field”.

With that being said, we felt it necessary to round up 25 occasions where the pair not only flexed their lyrical dexterity, but also showcased their understanding of the beautiful game through some clever (and some completely jokes) bars. While you’re probably all familiar with Headie’s Mo Salah bar, there might be a few football lyrics amidst all the crud which you may not have clocked when listening to the two Tottenham MC’s shelling. We’ve broken down the 25 best Headie One and RV football lyrics.

The track which propelled Headie to mainstream success contains his now iconic reference to Liverpool’s Egyptian King, comparing his potency on the mic to Mo’s goal-scoring prowess.

Remember Spurs’ old rash vest-resembling Kappa shirts which peak-era Jermaine Defoe wore while banging them in on the regular? That’s how long RV’s been doing his thing in Tottenham for (probably while you were waved on a Greek island).

“No points getting scored on me, I’ll get man down in my Jordan 3’s / I’m like Balotelli in Man City, why always me?”

Simple one from RV, who shouts out Mario Balotelli’s most infamous moment on a football pitch to his own lifestyle on the streets.

Headie’s work rate in recent years has been similar to the Italian midfield general’s in his AC Milan days, with this collab with Kenny Allstar one of Headie’s hardest tracks.

“Shit gets messy, no Argentina, on the other side where the grass is greener /
Get caught when I bun this Nina, that’s you X’d like a pass on FIFA”

RV and OFB’s opps are from Wood Green – so here he’s effectively flexing his crew’s prestige over their rivals while referencing the Argentinian GOAT.

Shouting out clinical strikers from times past and present, Headie has fast become one of UK rap’s deadliest frontmen, particularly when unleashing bars like this.

“Really put weight on those scales, I was in jail doing porridge / Spent three on Wayne and Mel, Never walk alone like Sturridge”

Sturridge’s prime has been spent on Merseyside – polar opposite to eating oats in the jailhouse.

“I couldn’t care about Lineker or Jenas, it should be me and Rev on the panel / How many times did we score? Excellent finish, should’ve seen the net, it just rattled”

Match of the Day is part of most people’s weekend rituals. But imagine MOTD with Headie One and RV hosting? Unmissable.

“Like, go on the lurk and anyone you catch in the area / Put in that work, wet up his chest like Patrick Vieira”

This bar, though. Anyone who spent the early naughties watching Viera demolish opposition midfielders when Arsenal were actually successful will know that the big man had a fair old whack of vaporub smeared on his chest – and you can work out what RV means with this one from that.

“Scored so much points from back in the day, we gotta come first on Match of the Day / All we did was attack like Robben and Drogba, we didn’t need no Makélélé”

Some of Chelsea’s mid-2000’s team heroes are referenced by Headie here, who doesn’t need any defensive support while he’s on all out attack and point scoring for OFB.

RV beat an attempted murder charge which he would’ve faced a 14 year prison sentence for – the same number on the back of Henry’s legendary Arsenal shirt.

“Really take these risks, been doing up field, no farmer / These old timers ain’t on nuttin, they fell off, Jamie O’Hara”

Another Headie classic. This old school bar shout out the now passed-it footballer Jamie O’Hara, who is now playing non-league football. We’ve noticed O’Hara has clocked the bar and has commented on it on Headie’s Instagram.

“And he’s free in Tottenham like Danny Rose / No more bag up at 6, or doing up canteen codes”

RV compares his freedom in his local area to the number three that Spurs’ left back Danny Rose dons.

“M way, make a killing, them man broke, still chilling / That ain’t a real drilling, that must be Djibril like Cisse”

Headie calls out his opps for chatting breeze (dribble) by comparing them to ex-Liverpool striker Djibril Cisse.

“Name an opp block I can’t go to / If I didn’t score that point on an opp, hop out of the whip like Ozil”

RV compares Arsenal’s German assist king and his deadly delivery to his point-scoring prowess on the streets.

“Swear it’s about time that this match got called off / The score’s like fifteen-nil, no Warnock, man ain’t gotta check that scoreboard”

Headie’s prowess is so imposing he’s absolutely thrashing his opps. So much so, he contrasts it to Neil Warnock’s record – presumably while at Cardiff – which saw him took L after L on the way to getting relegated.

“My young boys doing quite well with this sawn off, that’s metal proper spreading like Flora / I tell her just get this bread and get to the sterling like De Bruyne”

Headie here talks about his needs to secure his funds, and compares his need for getting it to how Raheem Sterling has been assisted time and time again by City talisman Kevin De Bruyne.

“M Huncho, RV and Headie, Dats Neymar, Suarez and Messi / I put in work for my gunners, Now I feel like Seaman again.”

RV and M Huncho dropped this track while MSN were in their prime at Barca, which explains why RV compares the deadly strike trio’s on-pitch prowess to him and his affiliates off-field antics.

“I’m cutting through West, Kanye, And I’ll spend all of this money / Make these bad b’s come niz N’Golo, Kanté”

Headie compares his ability at making his girls “come to the niz” ‘and go low’, to the Chelsea midfielder.

RV compares his potency on the streets to Eden Hazard’s prolific form at Chelsea, while also saying how he won’t hesitate to back stab someone with a 6 (six inch blade), which is the same number the Arsenal centre-half wears.

This one’s a mad one. Referencing legendary former Argentina, AC Milan and Chelsea striker Hernan Crespo to how long he’s been out doing his thing, Headie also talks about how he shotted (8) balls as effectively as Portuguese playmaker Deco did back in his Barca days.

“My team run Tottenham (OFB), I feel like Pochettino / She told her friend that she likes me, but she don’t wanna boost my ego”

Headie mirrors his choice of pistol to Tevez’s famous number while he played at the Tottenham rapper’s favourite team, Manchester United.

Another gem from Headie which compares his time in jail (on the wing) without getting a trim to Jermaine Pennant’s old afro the ex-Liverpool-winger sported back in his prime.