'Home Away From Home' is a new editorial series from VERSUS and VISA, where we hear how some of the most influential voices in football culture are lining up behind 'second teams' this summer in celebration of the world class football on our doorstep. In our final instalment, we link up with Samantha Miller, the ex-baller turned TikTok sensation. The former Spurs and West Ham player tells us why she thinks the Netherlands can go all the way in UEFA Women's EURO 2022 and her hopes for the women's game moving forward.

Samantha Miller knows everything anyone could possibly need to know about the women’s game. The multi-media wizard produces some of the best content available to football fans across Instagram and TikTok, racking up millions of views in the process. From Sam Kerr accepting Aussie snacks from fans on the sidelines to BTS footage of Miller’s life as a broadcaster and social media star, this former baller’s insights and access to the game hits top bins each and every time.

The West Ham and Spurs alumnus has been covering all things Northern Ireland so far this tournament, chopping it up with the players and manager pre and post match at their base camp in Southampton. Now the Green and White Army are no long in the competition, Miller’s been marching up and down England to soak up the atmosphere and capture content across the knockout stages of the tournament.

Having travelled to the Netherlands in 2017 to watch the Dutch lift their first-ever UEFA Women's EURO trophy, Miller's been following the side ever since and has chosen to support the flying Dutchwomen as her second team in their efforts to retain their title.

VERSUS sat down with Samantha to talk about how important access to women's football is when wanting new fans to join the movement, her love for wavy kit design, and how she thinks this tournament can help the women's game be even bigger and better. 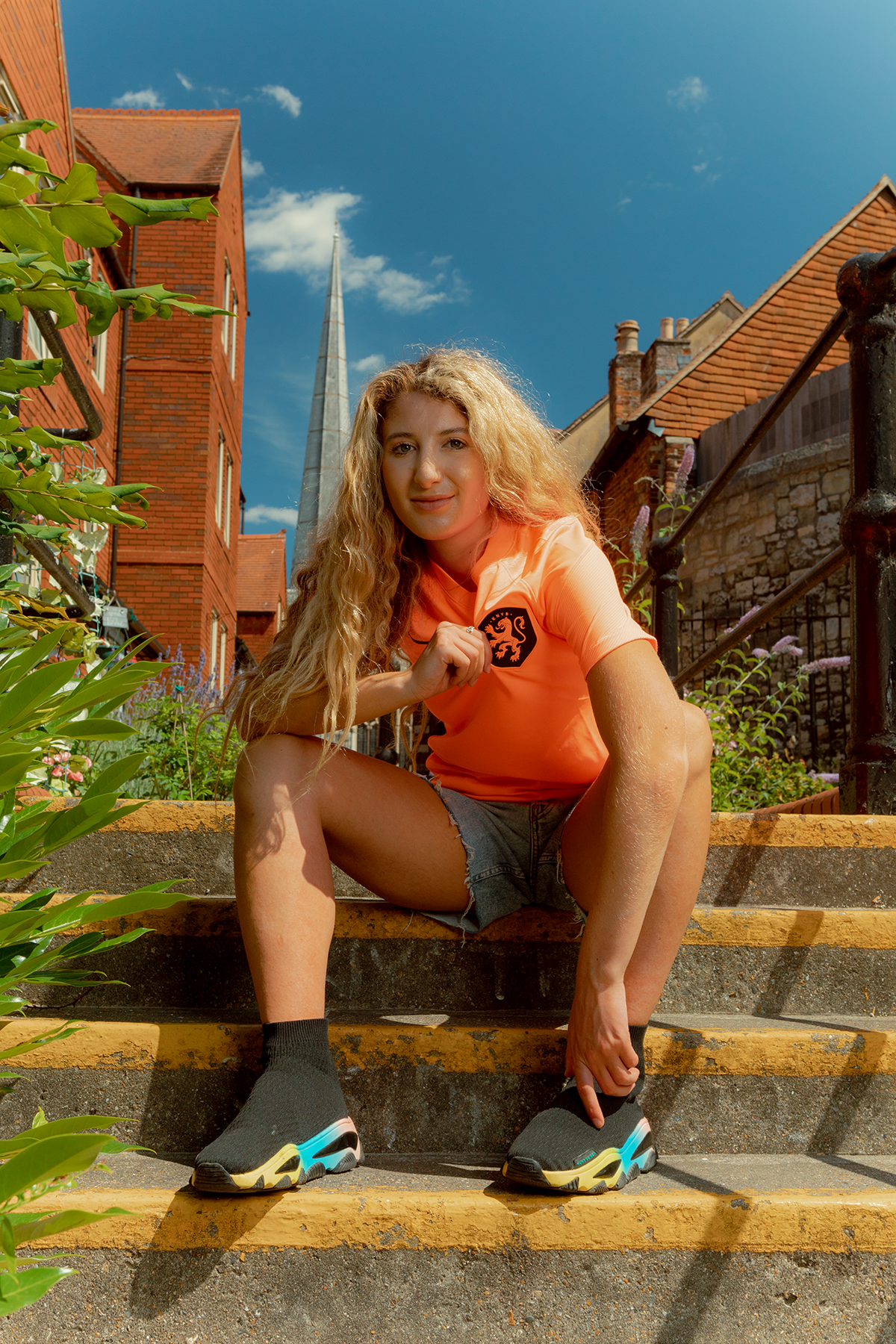 VERSUS: ‘Home Away From Home’ is about encouraging fans to open their eyes and ears to the amazing teams playing in England this summer. Why do you think that’s an important thing to do?

Samantha Miller: Personally, I just love the game and I want to be able to support it in every way I can. I think if we get behind different teams and different nations as opposed to one, we can have more of an impact moving forward.

I want to see stadiums packed for all the different teams. They’ve all come to play in the tournament so I think – if you’re going to get behind it properly – you need to show your support to everyone, not just England.

We’ve actually seen attendance figures be broken for non-home games consistently over the last two weeks, why do you think that is?

I think the standard at the moment is so high, and a lot of players are now household names, so people really want to go and see them in real life. The likes of Vivianne Miedema are being spoken about in the world of football more often, so people are more aware of players in the women’s game and what’s happening across the different leagues. We’ve got arguably the biggest league in Europe – the Women’s Super League – but people are now keeping an eye on what’s happening with Barcelona in Spain, or Bayern Munich in Germany and the tournament this summer is a chance to see those players perform. I think ultimately, people don’t want to miss that opportunity!

You mentioned world class talent and Vivianne Miedema is a prime example of that. What was your reasoning for choosing the Netherlands as your second team? Was it because of Viv!?

Viv is great! But there is a lot more to this team than one player.

I really like their new manager, Mark Parsons. I think he did incredible things with the Portland Thorns in the NWSL, he’s also coached in the Chelsea set-up and is a nice guy off the pitch! I recently tore my ACL while playing football and he sent me a message wishing me well, which I thought was a touch of class and speaks volumes for what type of manager he is. I am really interested to see what he can do with this Netherlands side because when you get a new manager, it can often feel very different.

In terms of style of play, I really enjoy watching the Netherlands. I love how they attack and players like Daniëlle van de Donk and Jill Roord are a joy to watch, both players I’ve spent quite a lot of time watching in the WSL. I think this is a side made up of special talents. They’re also great from a set-piece, which I personally really like watching in football. They’re just such an exciting team! They’re 2017 UEFA Women’s European Champions and 2019 FIFA Women’s World Cup finalists, so we should expect phenomenal football from them! 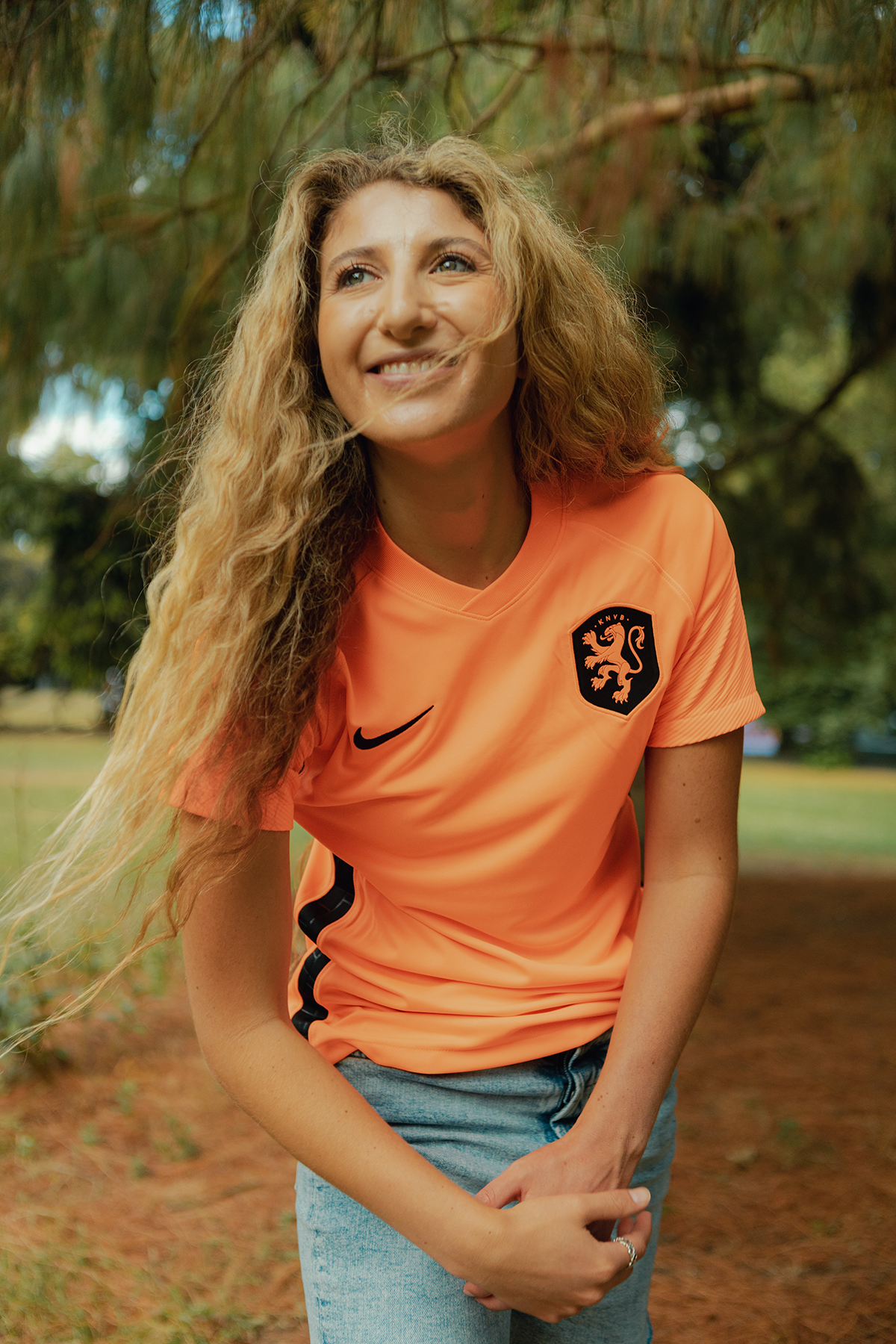 They really do! I went to the 2019 FIFA World Cup in France and was lucky enough to go to the final where the Netherlands played the USA, and their fans were unbelievable. You’d just see a sea of orange wherever you looked. They’d be screaming and singing, even when their side eventually lost, and I think that really represents the togetherness of football – especially international football.

What do you think is the beauty of supporting a second team?

It’s fun! For me, I watch so much football because of my job – whether it’s at club or international level – and I absolutely love seeing different teams play the game. You get to learn something new about football every time you watch a new side or player step foot on the pitch, and for the women’s game especially, it’s a chance to really big the game up. It’s only getting bigger and better, but there’s still some way to go before every team is treated with the same respect and has access to the same resources as others. So, the more people we have accessing it and taking an interest, the better it is for its growth.

I completely agree with you. If you look at a side like the Netherlands, who are one of the best in the world, they have players who still aren’t fully professional athletes. Miedema praised the KNVB just before the tournament kicked off for brokering the equal bonuses deal. She said it will make such a difference to those players’ lives because they aren’t pros at club level.

Definitely. I think what’s really impressive about the international teams is they’re all pushing for more. They’re really setting the tone for what’s needed in football, and not simply settling for things. You have the big names like Viv who are the driving forces behind that because they understand the power their platforms can bring to wider conversations.

I’ve been stationed in Southampton for the majority of the tournament with the amazing Northern Ireland girls, who have professional contracts at international level and that’s vital because some of them have day jobs working in Costa and Tesco, for example. They’ve really relished the opportunity to play in an international tournament and of course there are still things that need to be put into place to ensure those players no longer have to work 9-5 jobs, but these competitions help us to have discussions and learn about what other countries and cultures are doing within the football landscape.

A big part of football culture are the kits. What do you think of the Netherlands’ shirts?

I love them, especially the home shirt I’m wearing today. I’m all about big, bright colours and this classic Dutch orange is exactly that. I also really like their away kit, the white base colour is really classy and I love the fact they’ve incorporated the flag’s colours on there too with the red and blue squares.

The level of detailing that goes into designing bespoke women’s kits nowadays is brilliant. Like I mentioned earlier, women’s football is only getting bigger and better, and kit designs are also proof of that. 10/10 all-round I think! 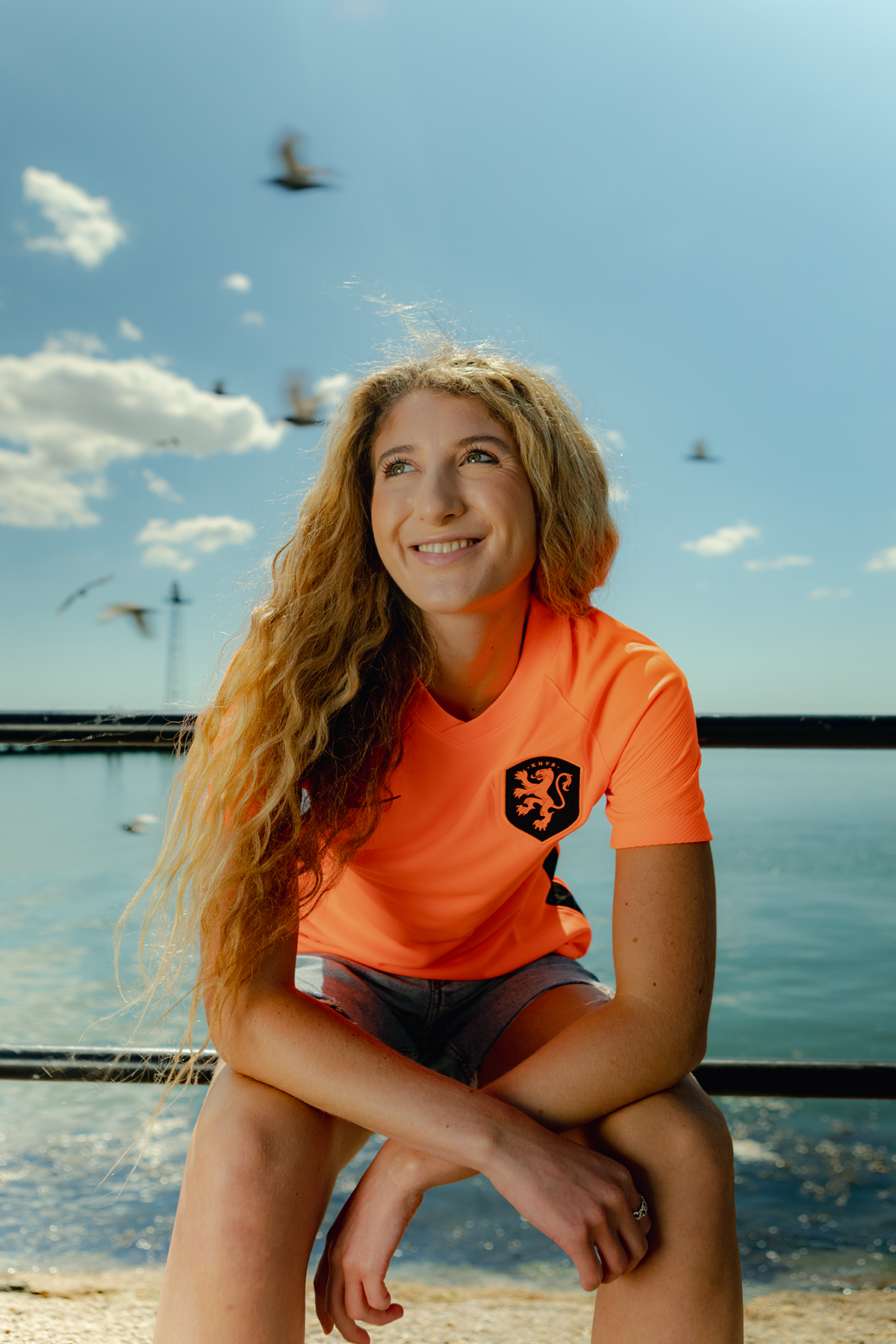 The Netherlands are one of those teams who just scream football heritage. Who are some of your favourite Dutch players from past or present?

Growing up watching Premier League football we had Robin van Persie and Ruud van Nistelrooy – who gave me some serious hair competition back in the day! In the women’s game, we’re really witnessing a golden era when it comes to players: Miedema, Sherida Spitse, DVD and some young up-and-coming players like Romée Leuchter and Victoria Pelova. It’s a really exciting time in Dutch football.

What is your favourite UEFA Women’s EURO moment?

My favourite moment happened in Netherlands during the 2017 tournament, and it was watching England’s Fran Kirby play against Spain. She’s someone who has experienced so much adversity in her life, and represents everything a good player and person should be. To see her play and score in that game was amazing. She just lets her football do the talking, and is a player who shines in those big moments.

How far do you think the Netherlands can go in this competition?

I think their next game against France will be a tough one, but I think they can beat them and make it to the semi-final at least.

A lot of people I’ve spoken with have said, “how good would it be to have an England vs Netherlands final!” because of the fact they knocked us out of the competition in 2017, and our manager – Sarina Wiegman – is their former coach. But I think having watched the tournament so far, the likes of Germany, France and Sweden have been so impressive it’s really difficult to predict anything! Usually when it comes to women’s football, especially the World Cup, you know the USA will do incredibly well but this tournament isn’t that straightforward and that’s testament to the quality on display. 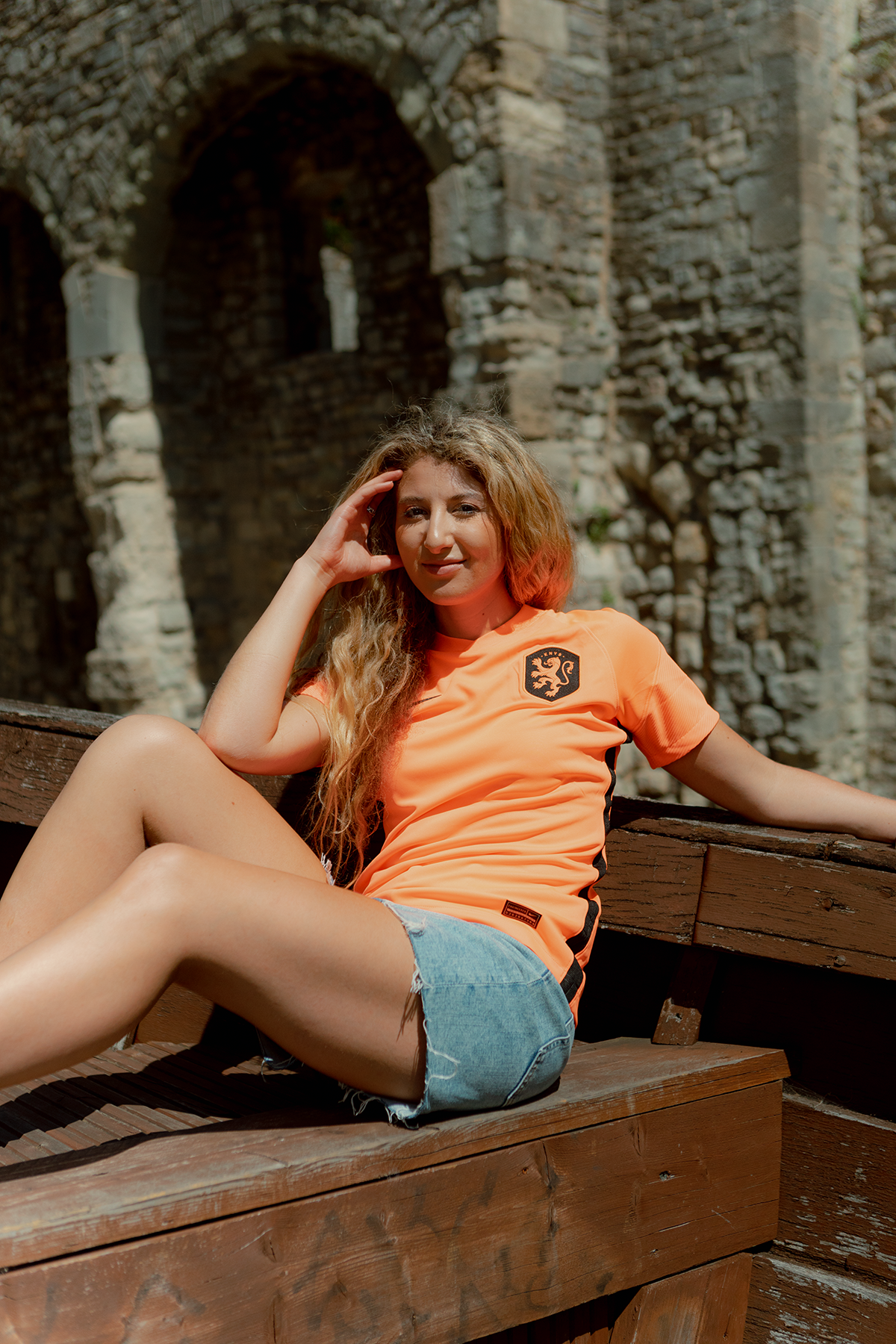 What would you say to people who struggle to put men’s and women’s football on the same pedestal?

I would just say, why the need to compare? You don’t have to compare everything in life! Just take it for what it is.

I enjoy the women’s game and I enjoy the men’s game. I might even enjoy different aspects of both. Nothing needs to be the same and that’s what’s great about it. Ultimately, if everything was the exact same, things would be so boring.

Be open minded to it. I think too many people shut things off before they’ve even given them a chance. I’ll give you an example, I keep going into my hotel lobby and asking for them to put the Euros on in the bar area. When I turn around, suddenly all the men in the room are interested and talking about the game. Sometimes it really is that simple. Expose people to something new, give them an easy access point and let them figure out the rest. It won’t take them long to realise how awesome the women’s game is.

On July 23, Netherlands will take on France in the Quarter Finals of UEFA Women’s EURO 2022. Follow @WEUROTicketing on Twitter for the latest news on available tickets.