Ever since dropping his debut single “Envy Me” in 2019, Sainté has gone on to become one of UK rap’s new vanguard. After his Local MVP project continued to build momentum at the top of 2021, the 23-year-old has spent 2022 delivering singles which sound unlike anything else in the scene. From the shuddering, BB-produced “Queen/Aim” to the effortlessly exuberant “East” and vibey end-of-summer joint “Arrogant”, each single has been delivered with an increasing level of flex – and for good reason. Sainté’s sonics, style and star quality make him an artist who is very much in his own lane right now.

For someone that puts on for his hometown so hard, it was only right that we link up where it all began for YS: Leicester. Pulling up with his manager, Kill, in a Mercedes GLS right into the thick of the action in the city’s market, Sainté’s smile indicates he’s enjoying being back on home turf. His warm and approachable spirit is complimented by his genuine curiosity and compassion for people and things. It’s immediately clear to see why he’s blown so rapidly in the last few years, with his energy bouncing off the fruit and veg sellers and a couple of local supporters, who he gives knowing waves and spuds too, as we roll through his city and talk through his journey so far. 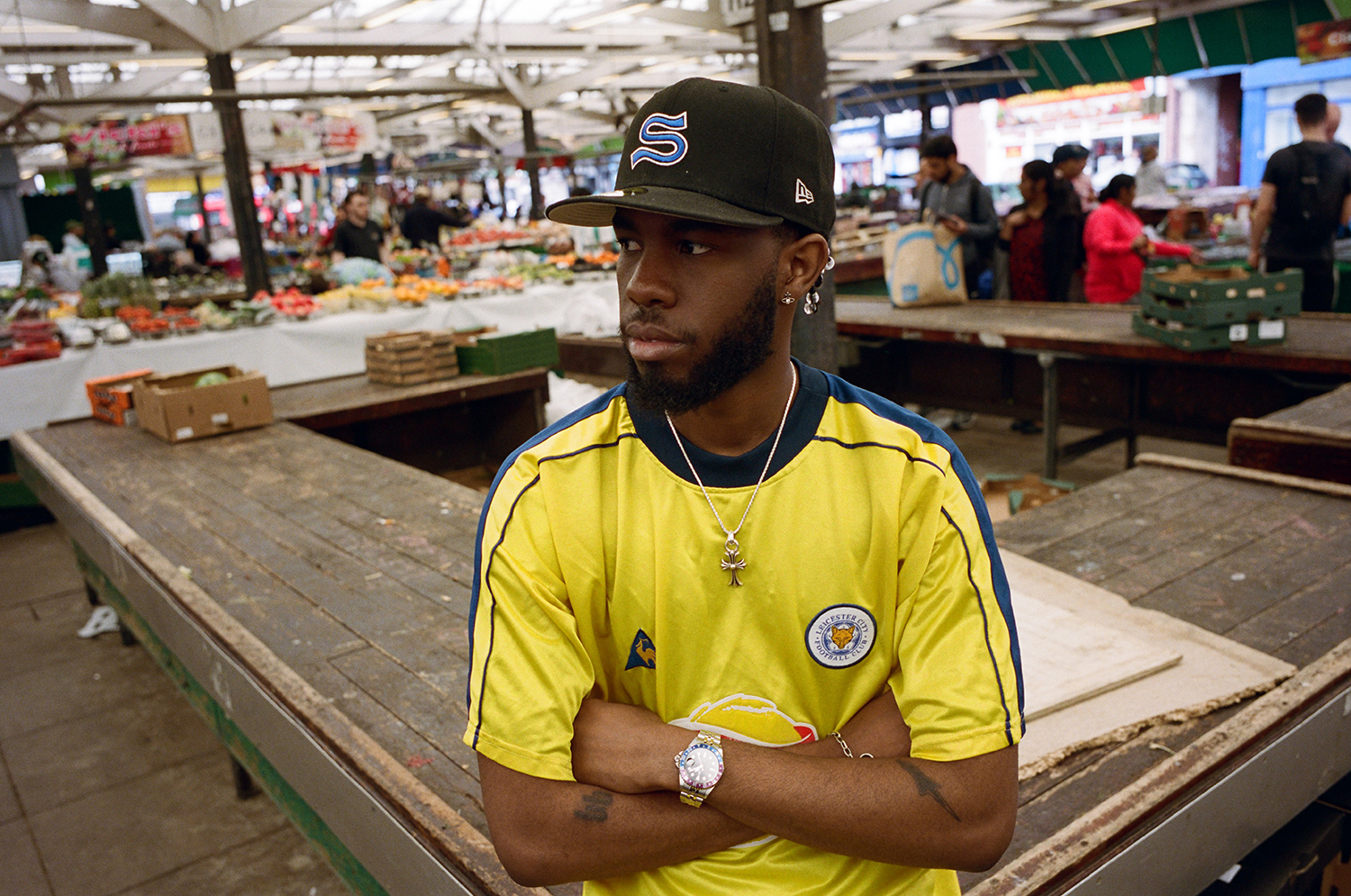 Leicester, renowned for its melting pot of cultures, ethnicities and Leicester City Football Club, is perfectly encapsulated in today’s shoot in the hustle and bustle of the market. Sainté pulls on vintage Leicester jerseys and pairs them up with a selection of fits – brought along by TJ Sawyer – and his diamond-studded grin. Growing up in Leicester was a grounding experience for Sainté, who pauses to reflect while in the thick of his hometown. “Leicester was so real, but so fake at the same time,” he poises. “You know what people say about the whole ‘London bubble’ illusion, when people get stuck into the London mindset. It’s actually a very similar thing for Leicester, but it was not necessarily bad. You know there’s a bigger world out there to explore. You know that Clash of Clans game where you’re building up your empire? Leicester felt like that.”

No matter the confines or situation, Sainté has always been thinking about the bigger picture. Inspired by sounds in the UK and US, Sainté would be a fan of the likes of Knucks and A2 before it made sense to collaborate with them on tracks. “I was tapped in and proper loved music, but I was in a very different world growing up there. I’m living in Leicester, with my friends, studying, taking stuff in…all while looking at these other worlds out there from afar. The world outside of mine – and that whole creative industry I looked up to – was just some sort of dream to me.” 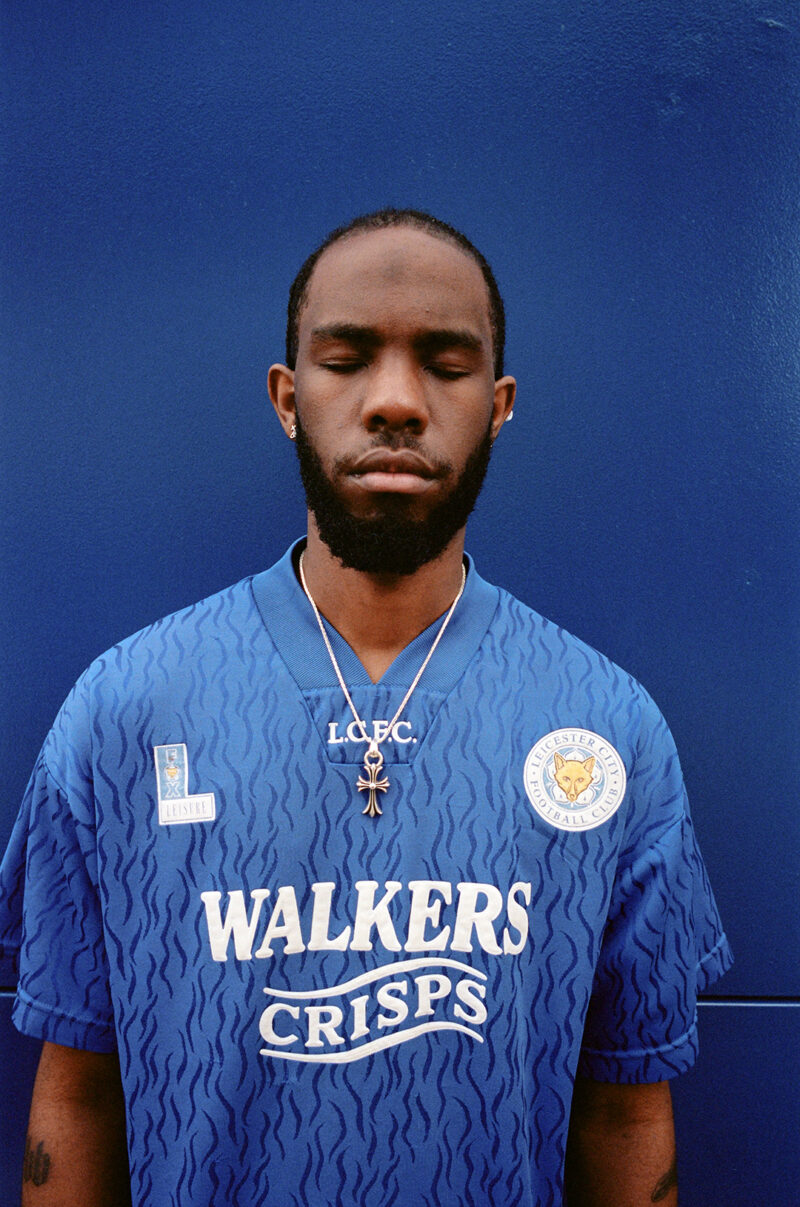 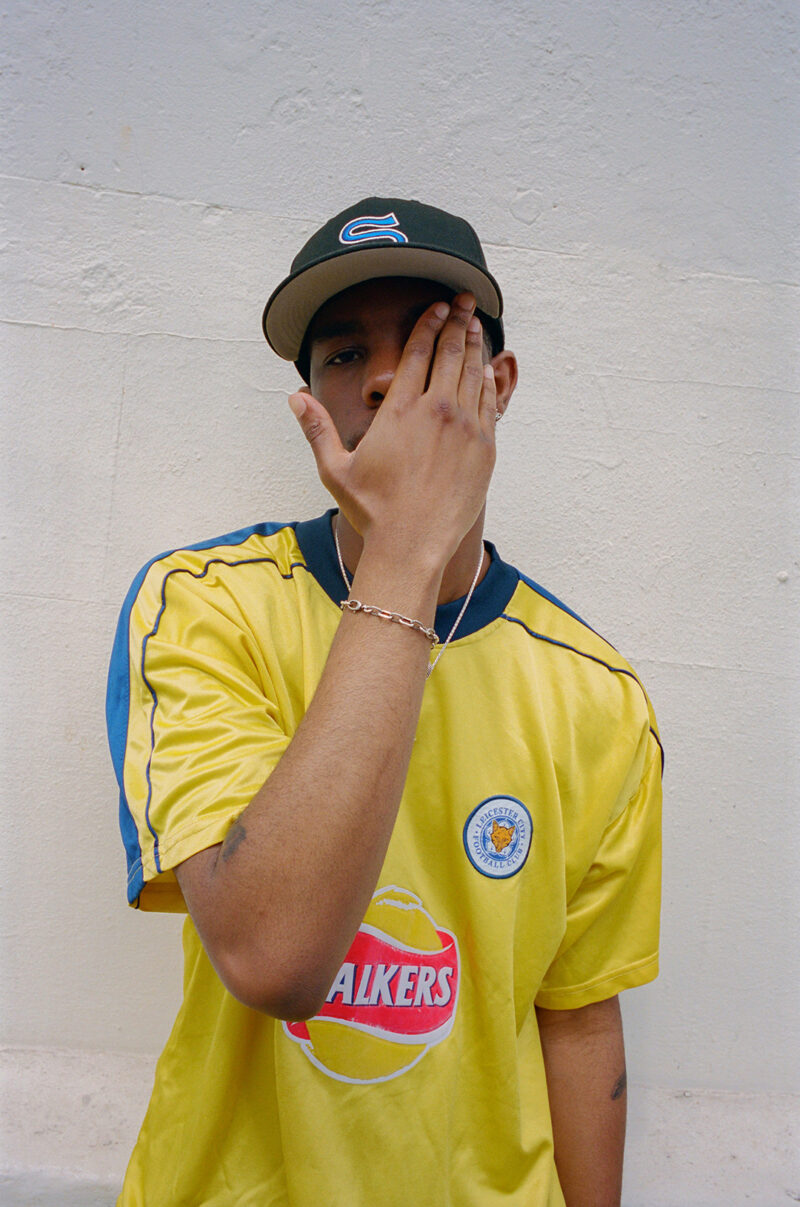 Now, reality is really hitting different. Sainté explains how he’s just come off a late one from Kenny Beats the night before – confirming he’s sitting on some heat with the US hit-maker – which was an invigorating experience for him. “When I’m connected with a beat or sound from any producer, even without drums, I can just write the hook in my head halfway through a session,” he says, while pointing his hands to his head. “We recorded together and must’ve cooked up two or three songs in just a couple of hours. The work rate was quick, but it was good. It was like a bleep test from back in the day at school. I like operating like that – but we’re gonna link up for more to finesse the tunes we made.” 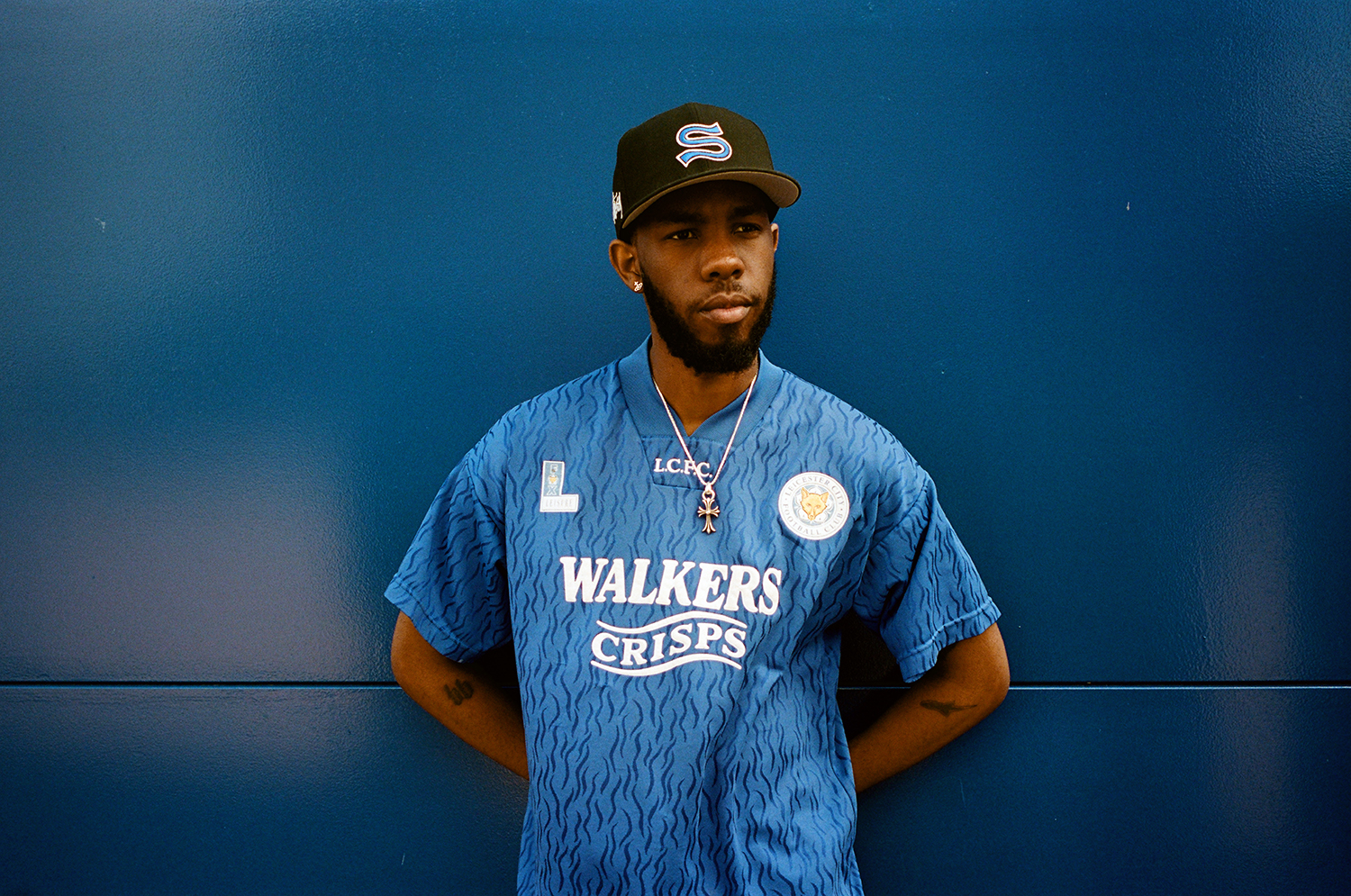 It’s easy to attribute that sort of relentless work-rate to growing up in a city that requires an inherent sense of drive to get by. Sainté, inked up with tats all over his body that signify important moments in his life so far, flashes a Fox Racing tattoo on his arm, muses on its meaning and the mentality and spirit of Leicester’s people. “It’s a city with a spirit of fighters. We’re underdogs. We’re foxes…and foxes are survivors,” he says, flashing another beam. “They’re constantly putting in work overtime to make ends meet. That’s the people of Leicester, the energy of Leicester. We’re not watching people too much either – we’re doing stuff for ourselves.”

Unlike a lot of kids growing up in a football-obsessed city full of Foxes fans, Sainté had hoop dreams before making it in music, playing basketball, as a centre, at Loughborough. “I was never the tallest at school,” he says, despite standing comfortably over six feet, “and there are seven foot brothers there!” With basketball and music constantly converging, it was only natural Sainté started rapping originally by freestyling with his teammates on the bus on the way to games, with his teammates encouraging him to flip bars he used to spit off the dome into fully-fledged, flavourful tracks. 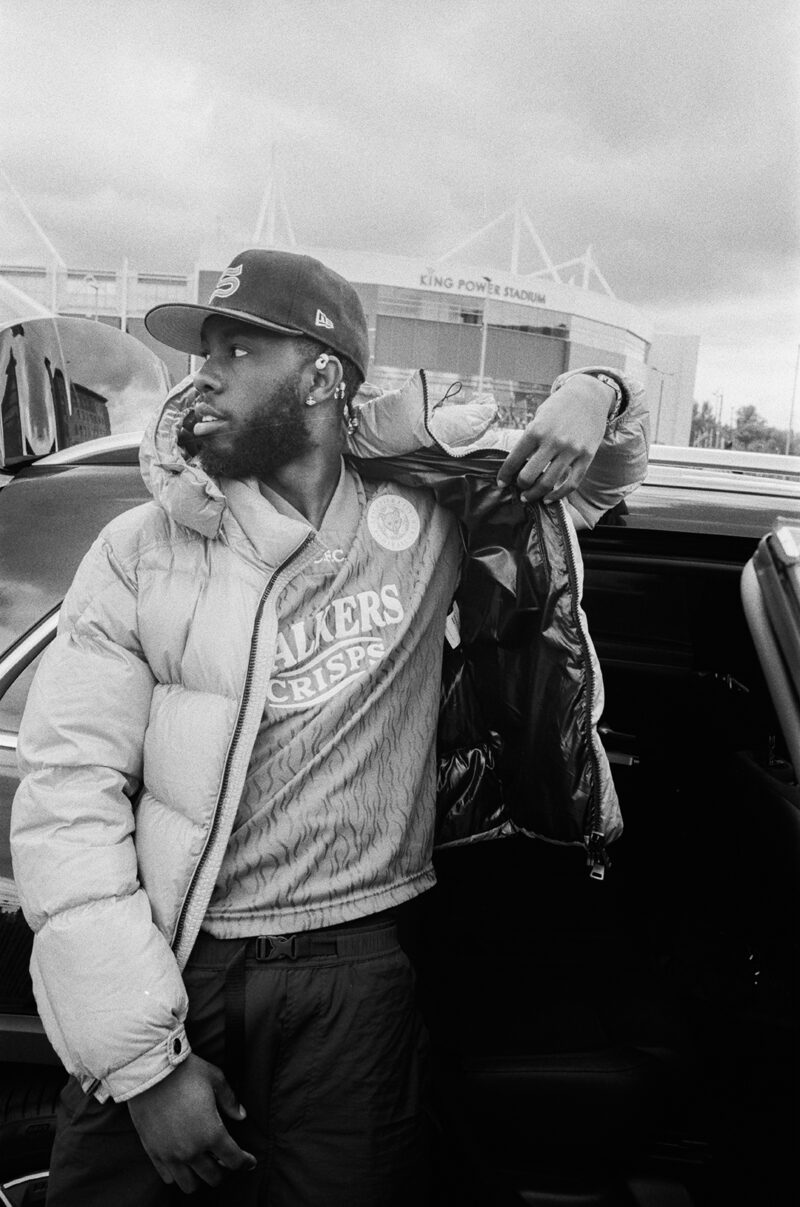 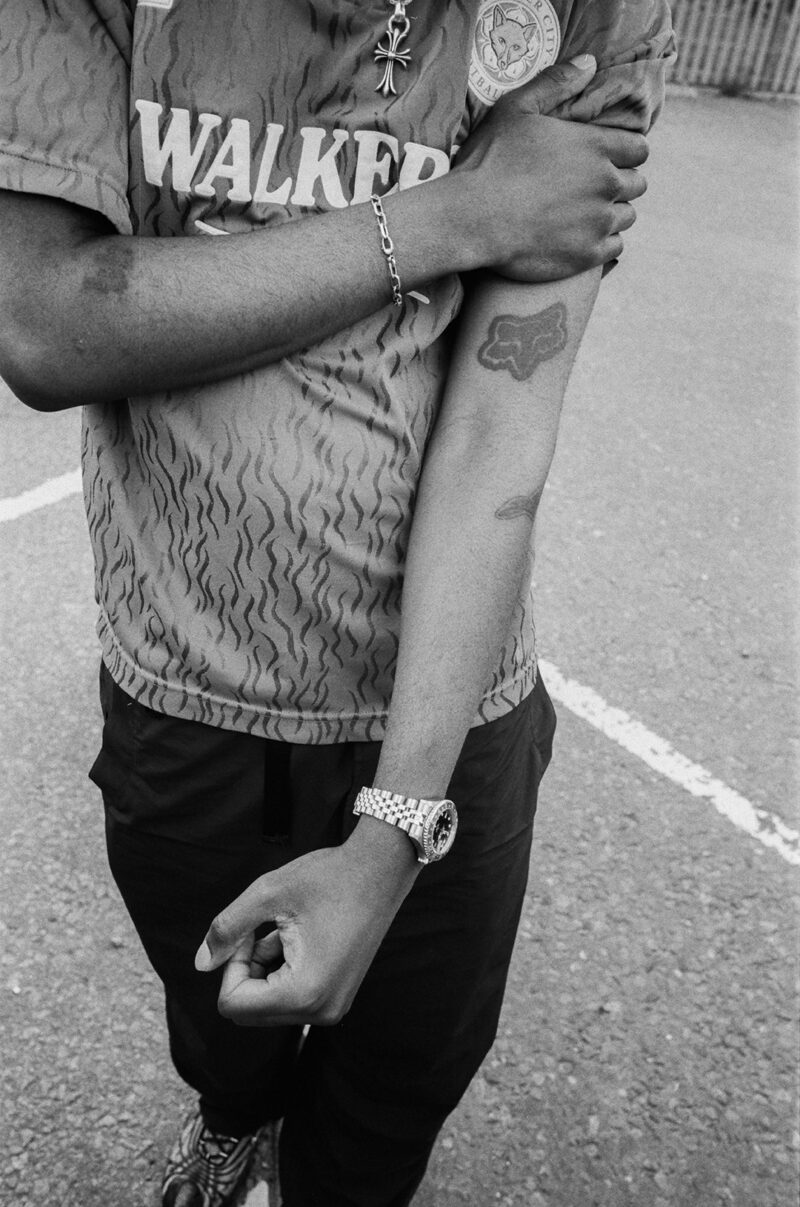 Whether it’s on the court or in the studio, Sainté himself says: “I in my name but I rep my team.” His idiosyncratic output couldn’t be executed without the help of his team, which includes partner-in-crime, Arran Ashan and go-to producer, Blake Baxter (BB). “I’m always involved with the process. I get annoyed not knowing what’s going on in my visuals, production…anything, I’ve just got be hands-on. Arran and BB will know this, but I just need to ensure my vision is expressed the right way. We’re not watching other people too intently, either. We’re on our own tilt, and we inspire each other. Naturally, I think me and Arran inspired each other to elevate beyond the ends together, too.” 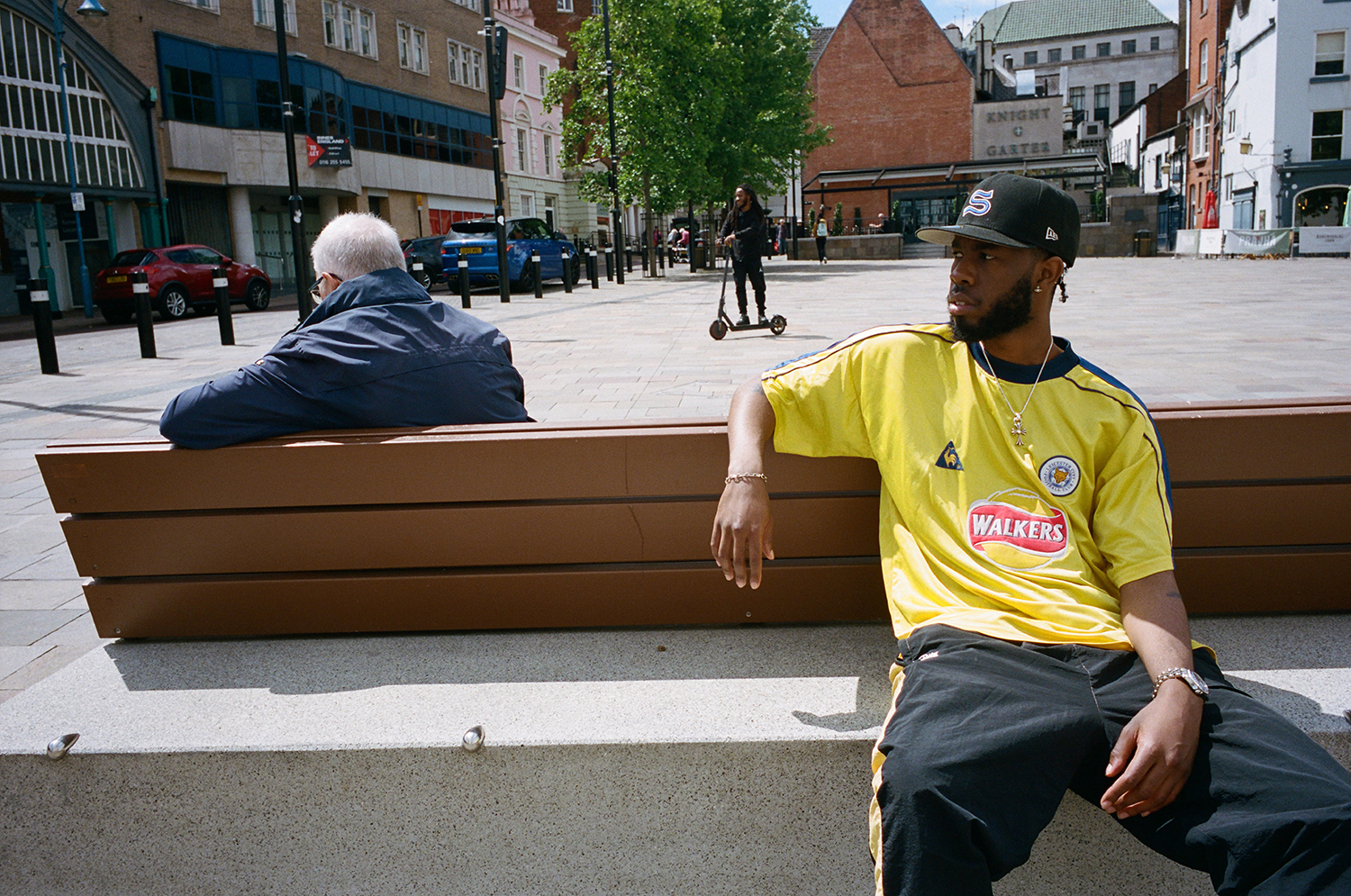 Balling out at Loughborough would open his world up in ways far beyond sport, with Sainté extending his palette with help from his international teammates from all over the world. “That’s when my world started opening up. Leicester. China. Portugal. Spain. America. Having all those different cultures and experiences around me made me realise I could expand my world further too.” There’s definitely an expansive, global focus to Sainté’s creative ethos, whether it’s stateside connections with rising US rapper Joony, through to his fashion-forward link ups with Billionaire Boys Club. He’s keen on establishing himself as a multi-hyphenate, equipped with deep-rooted sense for the way music, style, culture and place are connected.

Sainté mixes up the Billionaire Boys Club jeans and a Patta tracksuit alongside the throwback Leicester shirts for the first few shots, with both brands bringing Sainté more memories of his upbringing, where he worked in retail. 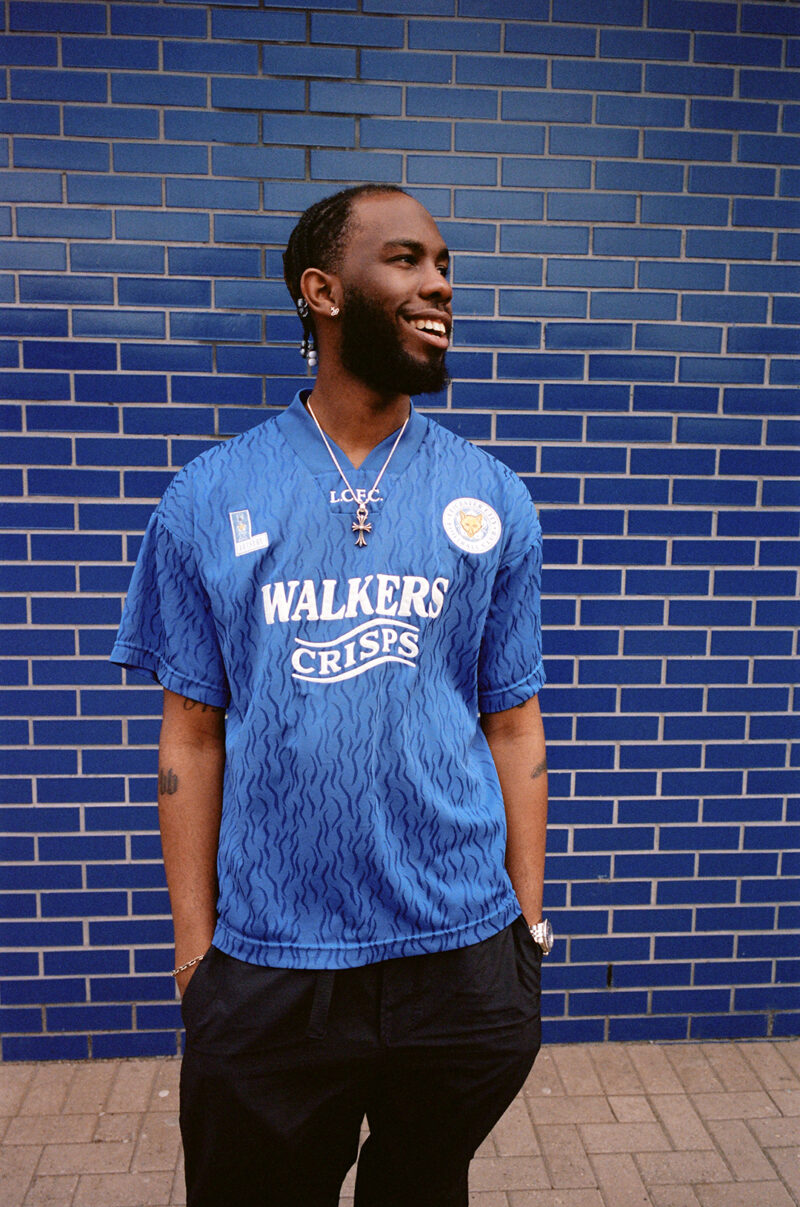 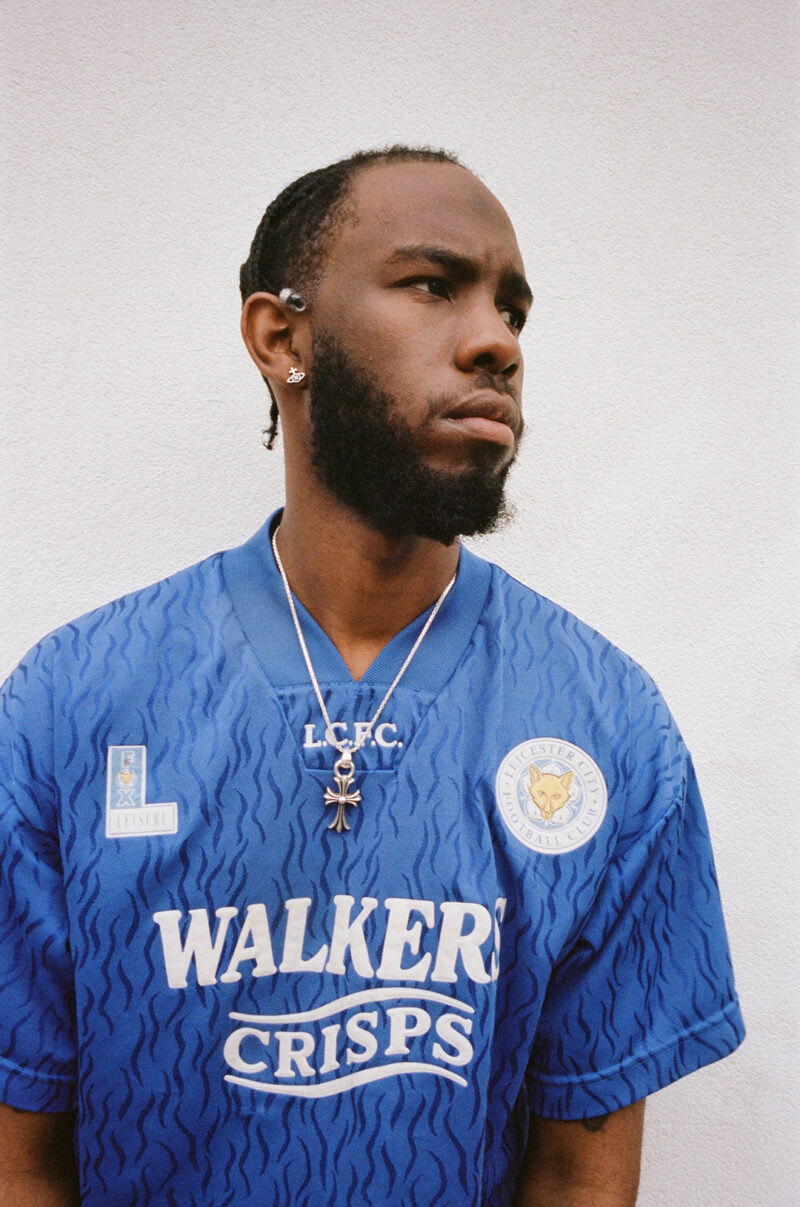 That experience would crystallise his love for fashion, but also fuel him with the drive to get out of it as soon as possible. “I used to walk into WellGosh in Leicester back in the day and I couldn’t buy anything. All I could afford was the socks they sold…even the tees at £40 were just too much back then.” One of the anecdotes from our conversation that illustrates how seriously he takes his style was an old flame telling him ‘I need to dress you’. “That’s a real traumatising comment,” Sainté stresses, “Like why would you say that to someone? That’s as hurtful as me telling her ‘I need to show you some good make-up companies’. It’s stuck with me for life!”

That need to evolve, re-invent and self-improve is evident with Sainté’s rapid rise. After ascending to new heights during the pandemic and 2022, Sainté is now set on expanding his creative prowess to fields beyond music, looking at artists like Jay-Z and Tyler, The Creator for an example of how he wants to operate going forward: “Look at Tyler, for instance. His evolution is crazy. From “Yonkers” to the sounds he’s putting out now? Totally different artist. That’s the sort of trajectory I want to go on as an artist.” 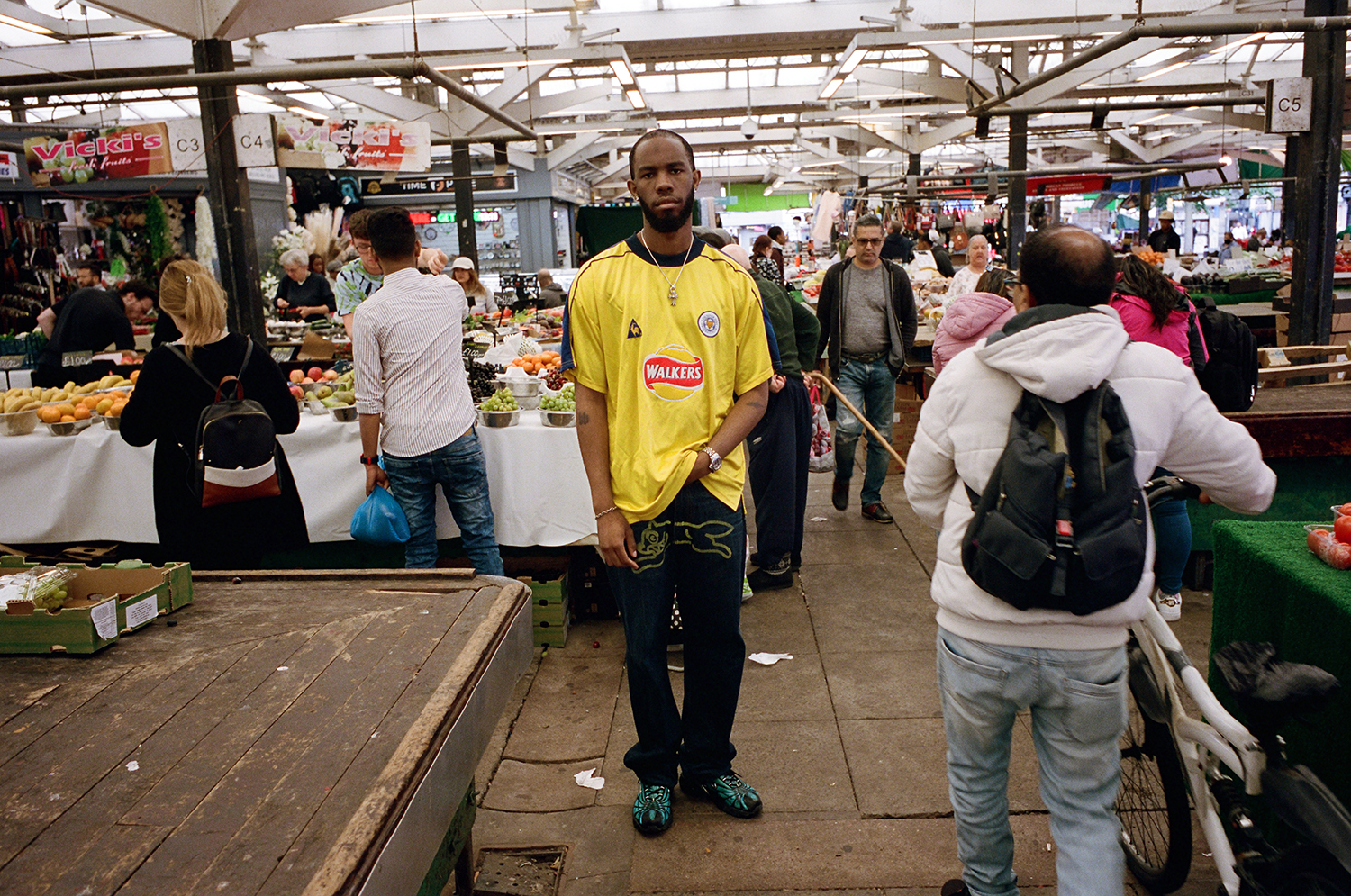 With that trajectory in mind, Sainté has continued to keep fans on their toes with his visuals and sonics. Artistic direction and aesthetics are an incremental part of Sainté’s vibe, with the notable switch up in his “Aim/Queen” EP with BB earlier in the year, taking fans by surprise. “I’m always gonna do that,” he says, when talking about his change in approach to the release. “I feel like I want to create a fan base who is ready to fuck with my sound even if I completely change the sound up. People say the same things about Kanye and Drake, they put out songs or sounds that people don’t mess with at first, it takes people a while to catch up.” 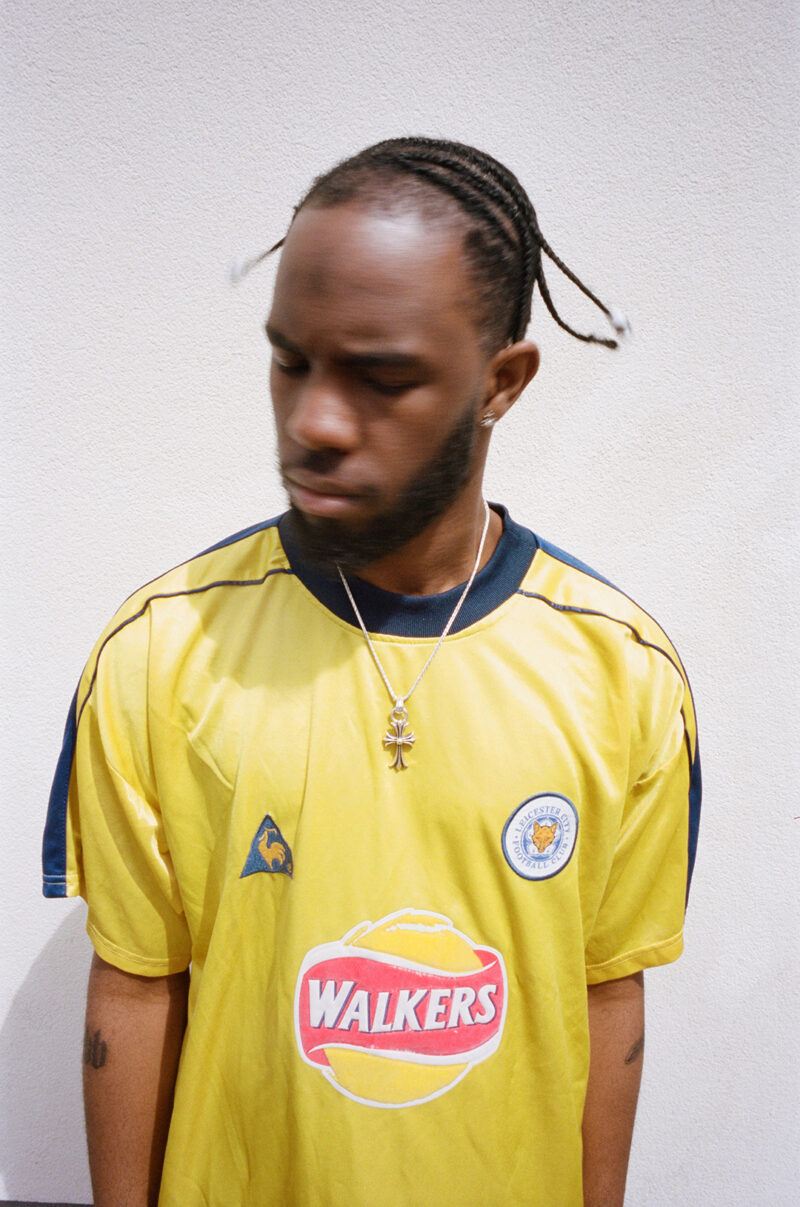 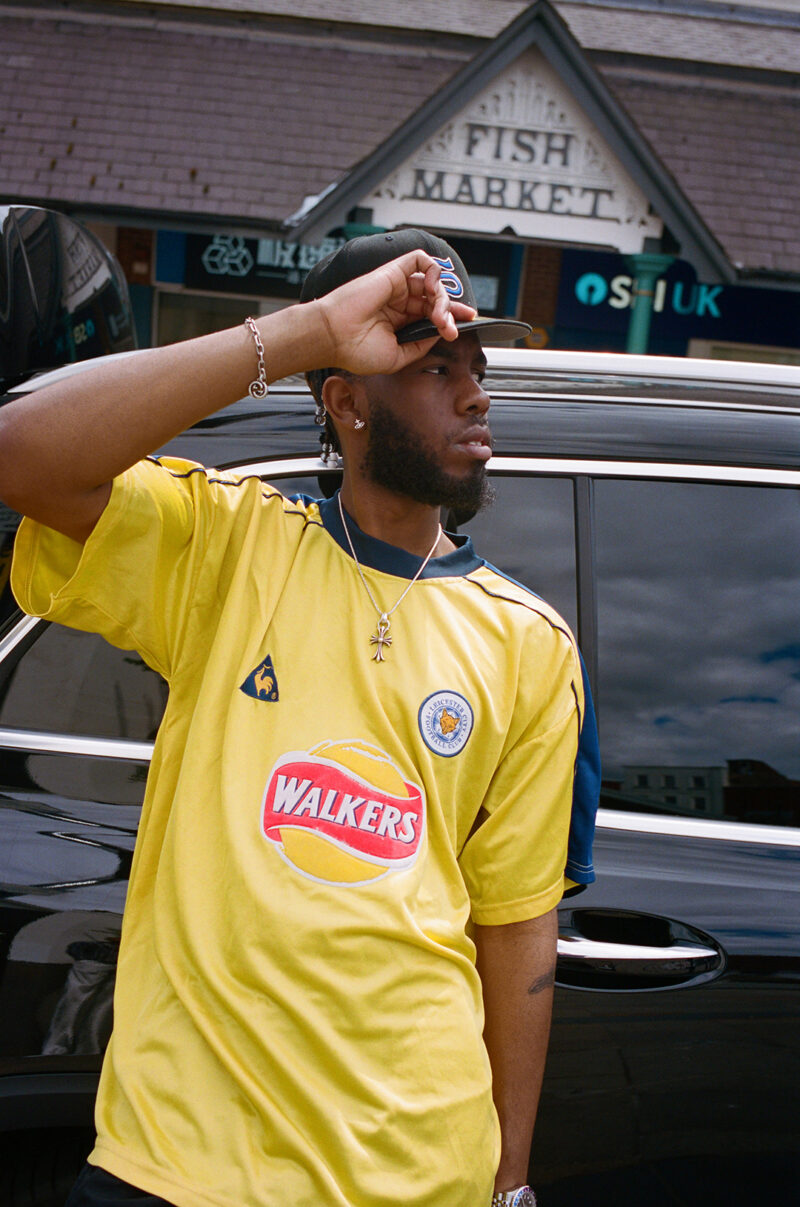 So what’s next in Sainté’s ascension? Much more collaboration and collateral is on the agenda. Not many artists have their own collaborative coffee shop tee lined up. But then not many artists are like Sainté. Sainté also unveils that he has some Always Do What You Should Do tour merch en route with the rising East London imprint, while also stating his intent for more with other rising UK brands: “One with Yardsale would make too much sense, too. YS x YS…it just makes sense!” Alongside working with people moving the needle in UK culture right now, Sainté really just want to give back to the people – and fans – that have supported him on his journey so far, and create stuff which people will connect to: “Whether it’s clothes, stickers, documentaries…tangible things that people will really feel, along with my music, of course. I want to create things that my kids can look at or watch back one day.”

Musically, it’s an exciting time to be a Sainté fan, too. When we get into conversation about his release schedule, it’s clear that the next project has a certain seasonal feel in mind. “I do think it’s cool to release music befitting of the season it’s in, and I keep it in mind…but I also like making music that allows people to reminisce,” Sainté says, before detailing the name of his next project. “That’s what ‘Vacation’ is going to be – it’s music to take you away, place you in a different vibe to the situation you may currently be in. This year was the first proper summer where everyone was outside. It’s been a summer to remember. So I thought, you know what, why not make a project that’s gonna bring people back to this summer.” 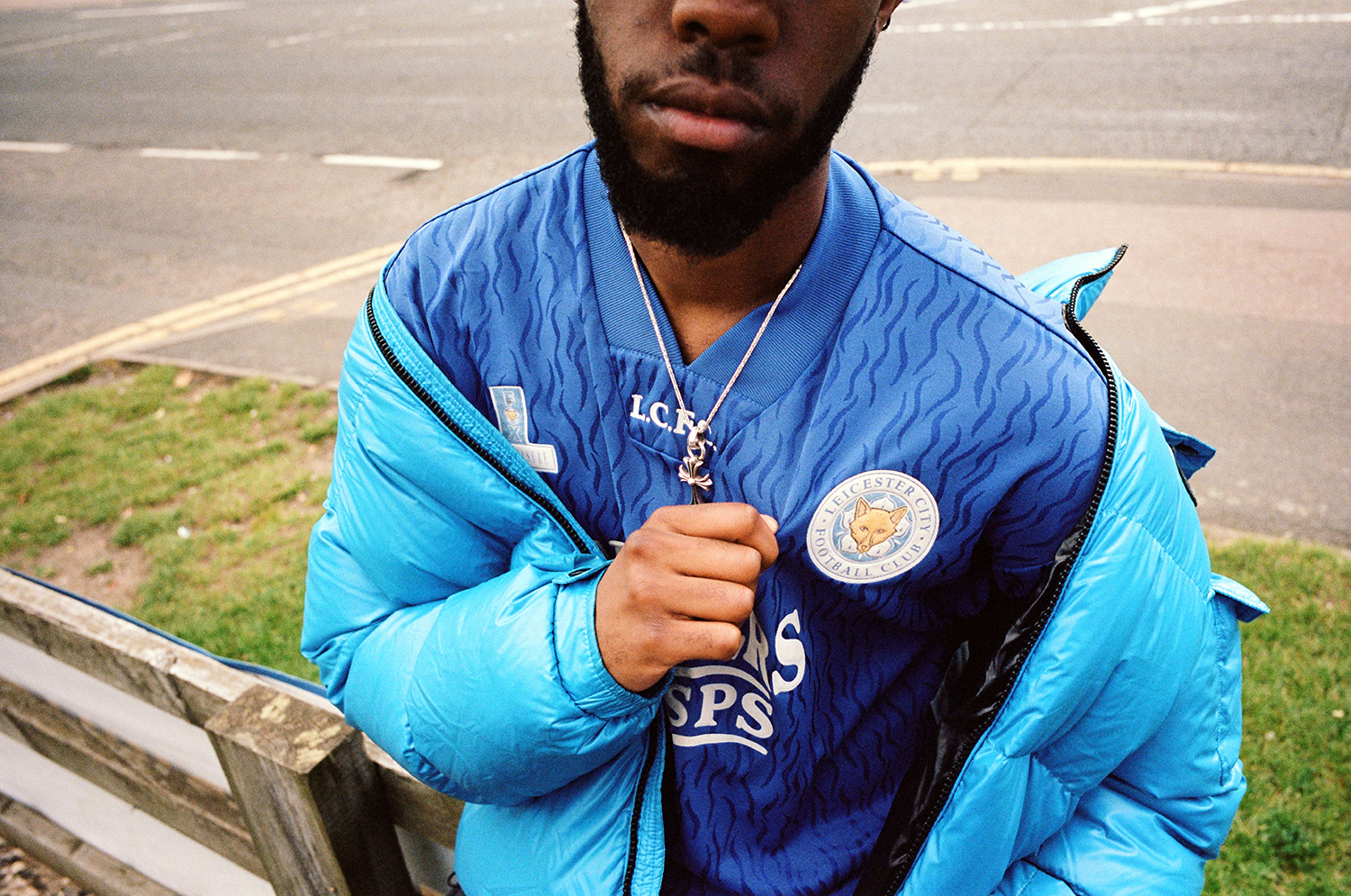