Nicole Holliday is the hardest working person in football who doesn't wear a pair of boots. Whether it's travelling around France to head-up presenting duties for the Lionesses during their 2019 World Cup campaign, standing pitchside to jump on comms for her beloved Arsenal or interviewing some of the game's most prolific ballers in recent years, Nicole Holliday lives and breathes football 24/7.

Now one of the most recognisable faces off the pitch, Nicole has linked up with Jameson and Lover’s F.C. to front a new collection of jerseys that’s all about celebrating the joy of international football and its power to bring the world together. Combining football, fashion and whiskey, the release sees iconic shirts from England, Germany, Holland, Brazil, Argentina and Ireland’s catalogue reworked with Jameson insignia.

Something that's immediately apparent when chatting with Nicole about Jameson's latest collaboration with Lovers F.C. is the power nostalgia plays in the presenter's shirt choices. "Some shirts really take you back to a certain time and place in football" she explains when asked about her existing shirt collection. "You can put on a particular kit and it automatically has the power to remind you of a certain player or game." Something echoed by Lover's F.C. founder Neal Heard.

Speaking on the drop, Heard explained how a simple 'thing' like a football shirt, can help to create a sense of community and evoke some of our fondest memories in football. "A large part of football shirt culture and obsession is the fact that we all have a shared history with iconic kits. It’s this that I like to tap into with Lover’s F.C. and the new Jameson collection - the shirts are talking points, they get strangers chatting and maybe even sharing a whiskey together. The inspiration behind them needs to be universal, and there’s not much more universal than national football shirts."

To mark the release of the new Jameson x Lover’s F.C. collection and to dig deeper into the power of football, we linked up with Nicole Holliday to talk football shirts, World Cup memories, and why she loves this competition so much. 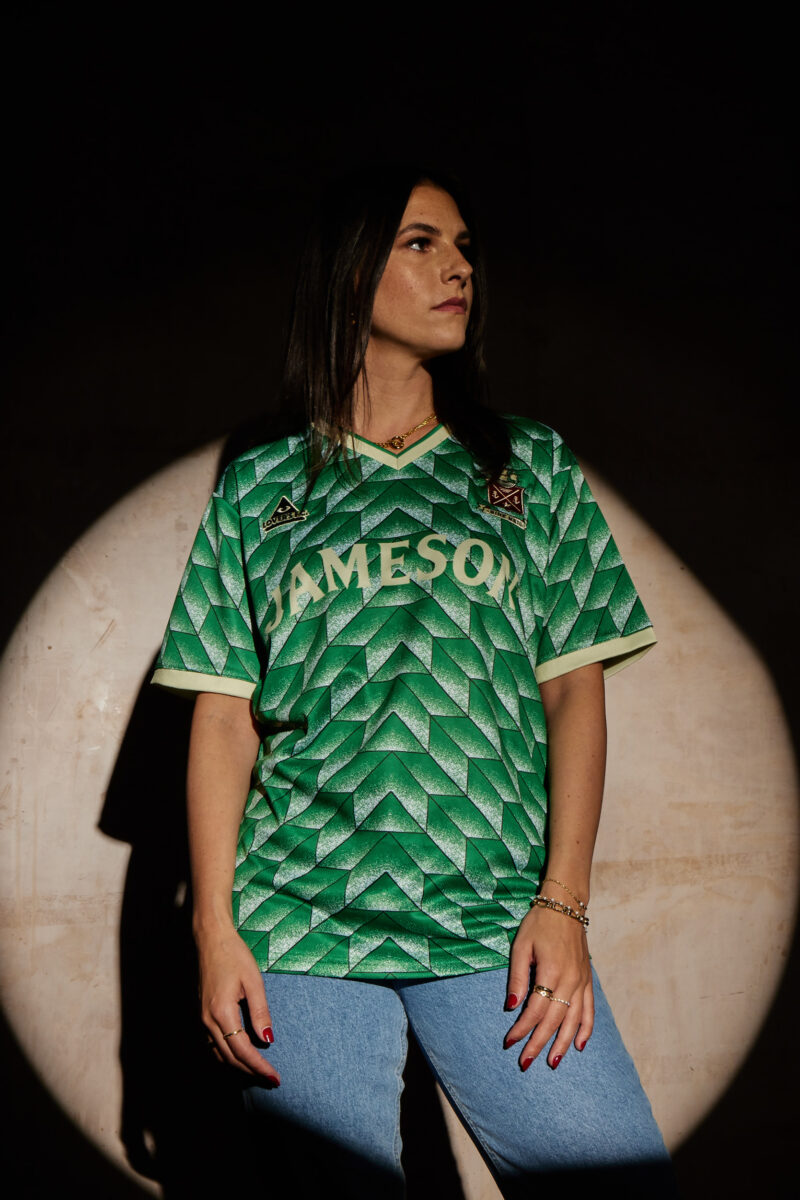 VERSUS: What memories does this shirt evoke for you?

Nicole Holliday: Oh wow! Firstly, I love the pattern and the green that’s been used for this shirt. I’m a big fan of the collar and cuffed sleeves too! But in terms of teams, this shirt reminds me of Germany and Holland. The graduated tones and triangular shapes remind me of some of their shirts from years ago!

What does the World Cup mean to me, mmm…it’s just one of those times in the year you really look forward to. It manages to bring people together in ways nothing else can, and that’s generally what I just love about football anyway. Even my best mate – someone who isn’t really into football, at all – called me recently to ask what I was doing on November 25. When I asked her why she said: “I’ve booked a table somewhere for a few of us to watch the World Cup.” I was quite shocked! But that’s the thing about this tournament, it has the power to bring communities together. People from different places and backgrounds, of all ages…they all watch the same games! I think it’s just such a fun time for everyone, and people tend to be in high spirits because of it. It just creates joy! 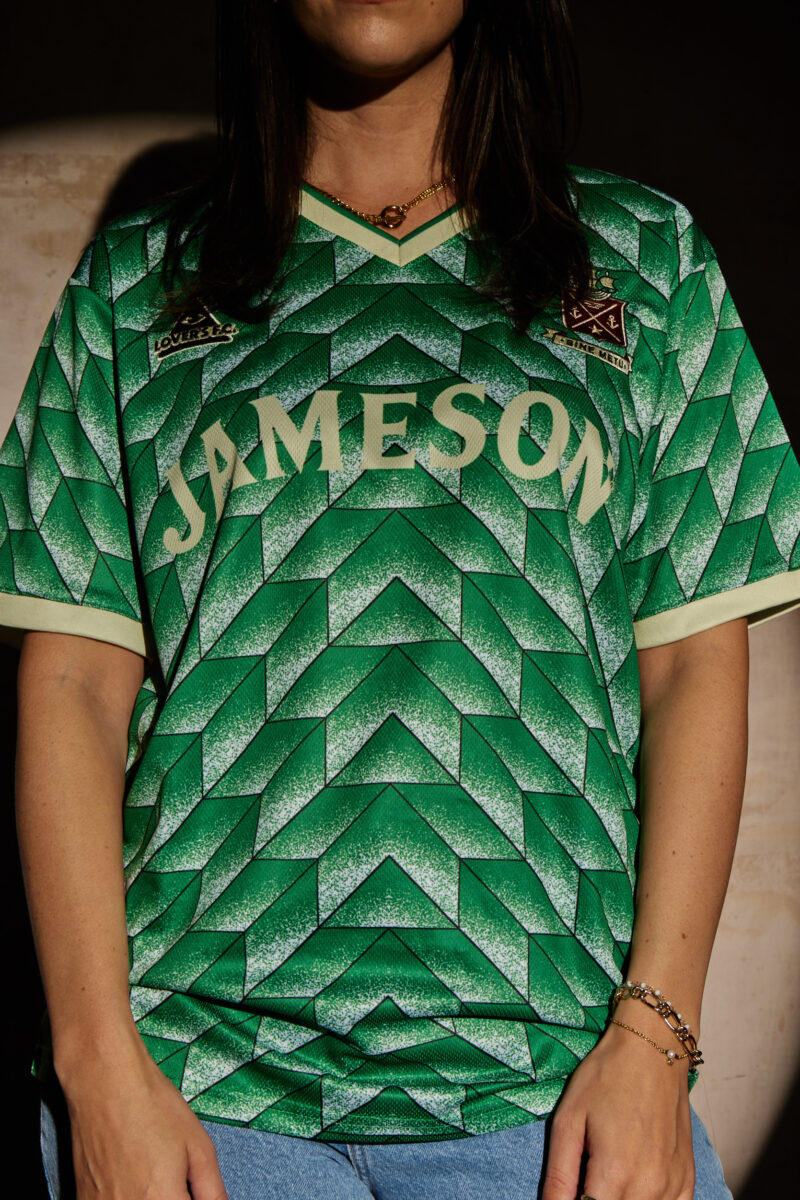 It’s quite different this year in the sense that we don’t get those ‘summer vibes’, but like you’ve just said, one of the best things about this competition, is hearing and seeing ‘non-traditional’ fans get excited!

I think that’s one of the nicest things about the World Cup, definitely. Back in the day, some people would be a bit judgmental about those sorts of football fans. “Oh you’re just jumping on the bandwagon!” but I think with this England team in particular – and with Gareth Southgate in charge – they’ve managed to bring people together through football. The media and fans are closer to the game and players than ever before, and I think that squad has helped to create a bond with the nation. England in general – including the women’s team – have helped to do that. More often than not we genuinely look forward to watching England play, and that gets everyone excited, not just those who follow the game week in, week out.

Did the World Cup change your view on global culture?

I think that’s a really good question, and maybe one I’ve never really taken the time to think about properly. Football has helped me to learn more about other countries and cultures, especially since engaging and working with different fan bases for my job.

Sometimes I’ll be covering a game that might require me to do some prep, and for me, one of the most effective things to do is to listen and watch YouTube videos from fans. I can then really tap into what is special about the club, team or player. Every nation celebrates differently, and there are cultural differences between nations, but the one thing that we all have in common is that passion for the game.

Who will you be supporting outside of your national team?

Well, I was hoping Scotland would qualify for the World Cup because I have Scottish heritage, but that didn’t work out! 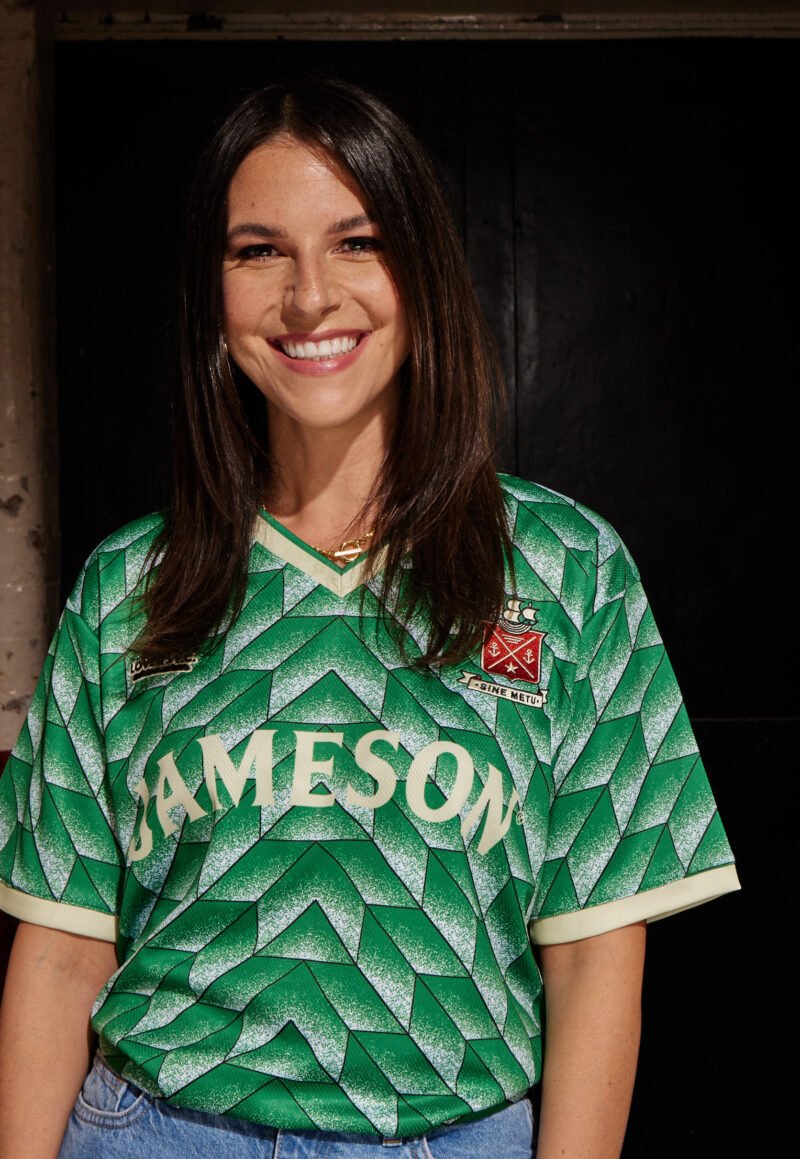 Will you have a second team?

I don’t know! I’m not entirely sure you can have a ‘second team’, but I could be looking at that from a club perspective. I mean, usually there’s an underdog in tournament football, and who doesn’t love an underdog!

Are there any players who aren’t English who you’ll be supporting?

I think I’m going to have to go with Brazil.

Is that because of all the ‘Gabbys’ at Arsenal?

100%! I recently interviewed Martinelli and he was the nicest person ever. That squad have such a ridiculous roster of players, they should do quite well this month.

What does football and fashion mean to you?

I think it’s changed so much recently, and what I love now is that there are so many retro looks – like these shirts – that are making a comeback. Shirts nowadays just seem so much more fashionable compared to five, ten years ago. I think I also quite like the nostalgia that comes with retro shirts. One of my favorites is my 2005/2006 Arsenal shirt.

Yes! I love that shirt. It’s way too big for me and sort of ends up looking like a dress, but I love the colour, the collar and what it represents. I also quite like that anyone and everyone can wear football shirts, you don’t have to be a player or a man to wear one. You can stylise and personalise your shirt, wear it oversized or fitted. When a shirt is cool, you can wear it wherever, whenever and how you want. I can see people wearing these shirts to the pub at the weekend for example. 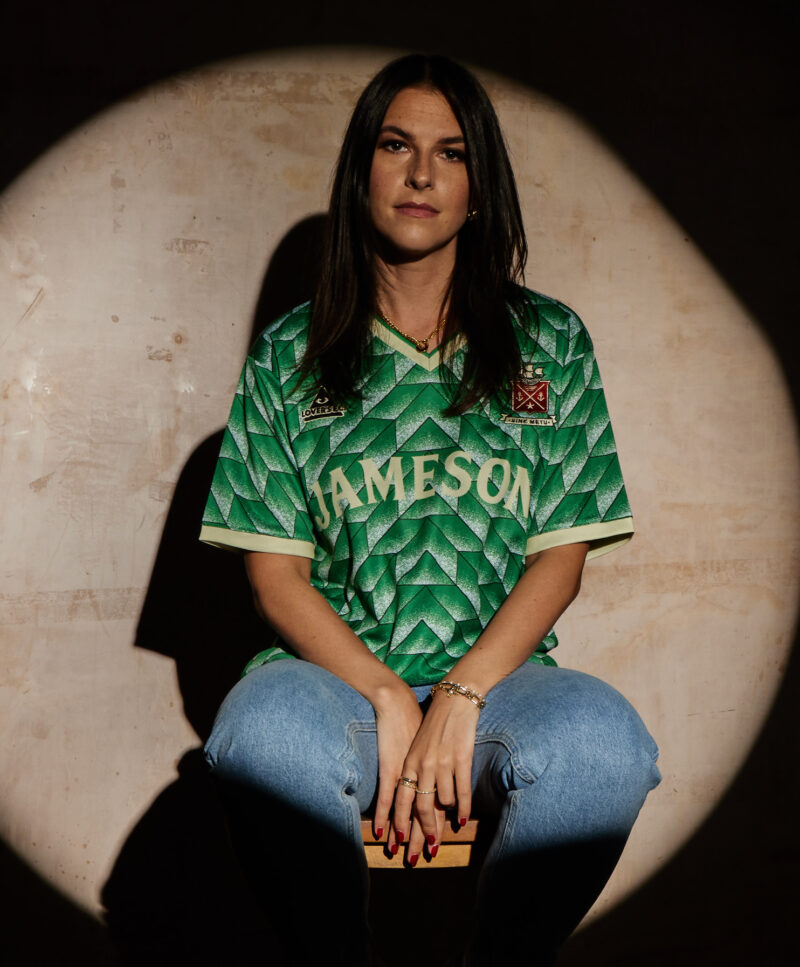 What are some of the features you like about the new Jameson x Lover’s F.C. shirts?

Straight away, I really like the colours. They’re vibrant and really eye-catching. Like I said, you’d see people wearing these on nights out or at a festival. If I saw them in a shop I’d definitely run over to see what the price-tag was saying!

I loved 2018! I was one of the lucky people to get a ticket to the screenings in Hyde Park, and I got to go with friends, which made it all the more memorable. At the time, I wasn’t presenting and had a job I didn’t really enjoy…I can remember trying to get cover so I could watch the semi-final and nobody would cover me. And of course they wouldn’t! They were also trying to watch England in the World Cup!

But you went to the screening, obviously!

Of course I did! The atmosphere was amazing, the sun was shining, I was there with my friends. Everyone was in such good spirits and the energy was positive – no problems, no fights, something you often come to expect in football but there was none of that behaviour at all.

I feel like that tournament was the start of us England fans getting behind our team. I think it’s quite easy to forget that the joy we’ve experienced these past few years, was actually quite rare back in the day. We should really relish the accomplishments this England team have achieved, and here’s hoping they go one step further this month.