There aren't many on the music scene who have football knowledge like Lil C. The London-born DJ and broadcaster reps both Liverpool and Juventus – courtesy of her Italian roots – and has been donning some of the game's most iconic kits while spinning the decks for years now. "I think it might be a problem," she tells us when we ask about her extensive football shirt collection.

Bashment, pop, classic R&B, Afrobeats and contemporary UK rap...there isn't a genre this A* selector can't blend and create legendary beats from. Her name might be Lil but the vibes C creates are huge. Now a key feature of the capital's independent radio scene, Lil C continues to make waves because of her eclectic taste in music and her efforts to make the industry a more inclusive one.

Kicked off her glistening career with Reprezent Radio before hosting her now beloved Pum Pum Power hour show on NTS, gal-dem's resident DJ has been setting the standard for fellow DJs to follow and is now doing the same in the world of football and fashion thanks to her latest link-up with Jameson and Lover’s F.C. as the two brands celebrate this year's World Cup.

Lil C fronts a new collection of jerseys that’s all about celebrating the joy of international football and its power to bring the world together. Combining football, fashion and whiskey, the release sees iconic shirts from England, Germany, Holland, Brazil, Argentina and Ireland’s catalogue reworked with Jameson insignia.

Speaking on the drop, Lover’s F.C. founder Neal Heard said the power of kits to symbolise our love of football remains undefeated: “The one thing I know from experience is that there are no more important football shirts than those worn at the World Cup. The best thing about the tournament is that the whole world is watching, people are sat in bars or around TV’s from Bangkok, to Rio, to Dagenham – all glued to those teams and those colours. These moments and the shirts stay with us and connect us forever.”

To mark the release of the new Jameson x Lover’s F.C. collection and to dig deeper into the power of football, we linked up with Lil C to talk football shirts, World Cup memories, and why football is the ultimate vehicle for unity. 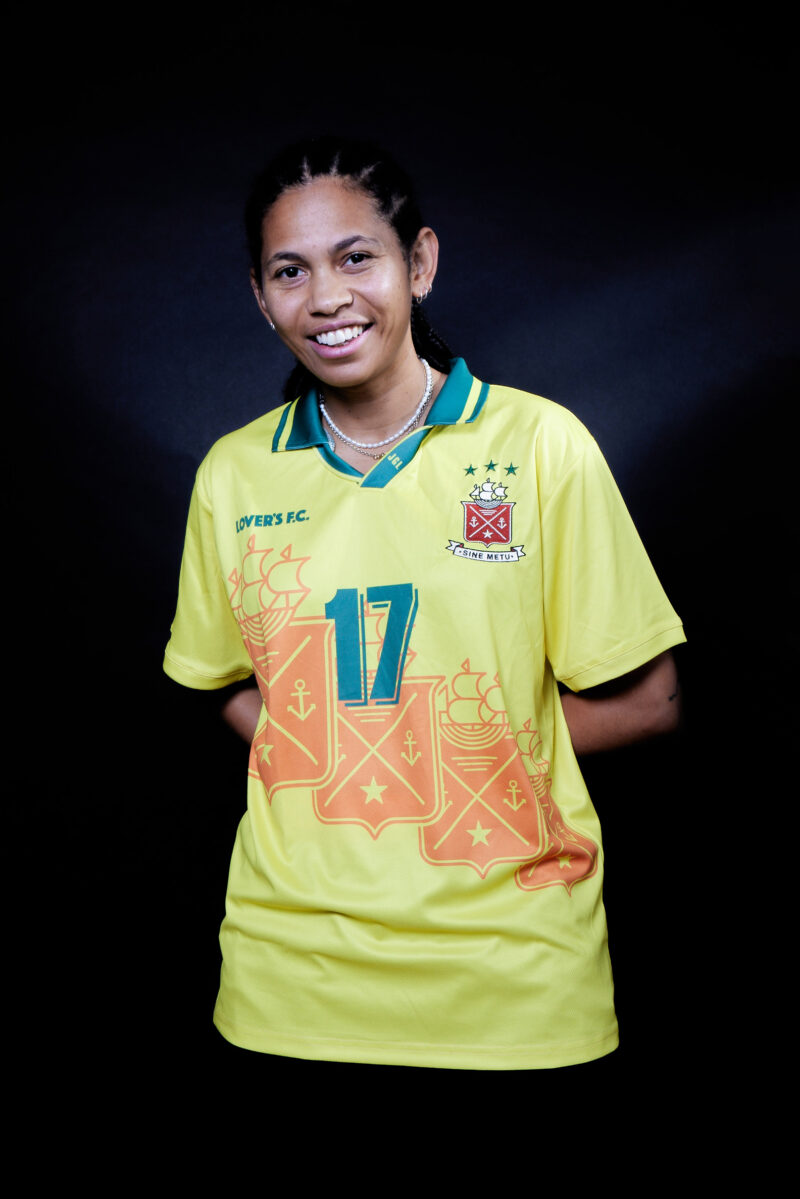 VERSUS: Let’s start with an easy question: what do you love about international football and the World Cup?

Lil C: That’s an easy question? Right, actually, I have a ‘core memory’ to share with you that involves football.

I was in Jamaica not too long ago, and one day I was just out and about minding my own business, and this guy came up to me, and being a Londoner I was a little like, “you alright mate?” and he actually was! We started chatting, I found out he was a student in Jamaica and from my accent he knew I was English, so I told him I was visiting and that I have Jamaican heritage – it was a nice introduction to be honest. And we then started talking about football! Discovered we were both massive Liverpool fans and that was it, we just couldn’t stop chatting! Just as I was about to leave with my family, he put his hand in his pocket and pulled out his keys. “Here, have this!” he said.

He took off a Liverpool keyring and gave it to me. My girlfriend now has it on her keys, it’s something that makes me smile whenever I see it. Football is such a powerful connector.

When people refer to it as a universal language, it’s because of moments like the one you’ve just described. In a lot of ways, these kits hope to share that same message of unity. When you first saw the shirts, what World Cup memories did they evoke for you?

Honestly, World Cup memories for me are just pure heartbreak. 2002 was peak for every English kid.

Around that time, I was so into football. Whenever I got the opportunity, I’d wear a football kit – even the socks! I’d go to school in my football shirts, I’d go out at the weekend in them, every family event I’d be in one. My mum just could not get me out of my navy England kit…

I had that one as well. Loved the fact it was reversible.

It was such a good template from Umbro. Big ‘Bend it Like Beckham’ vibes. I remember watching that game against Brazil in the school assembly hall and just crying for the rest of the day when we lost. My brother is older than me, and so naturally spent most of the day winding me up about the loss – he’s always supported Italy because half our family are Italian – which just made the day even worse. 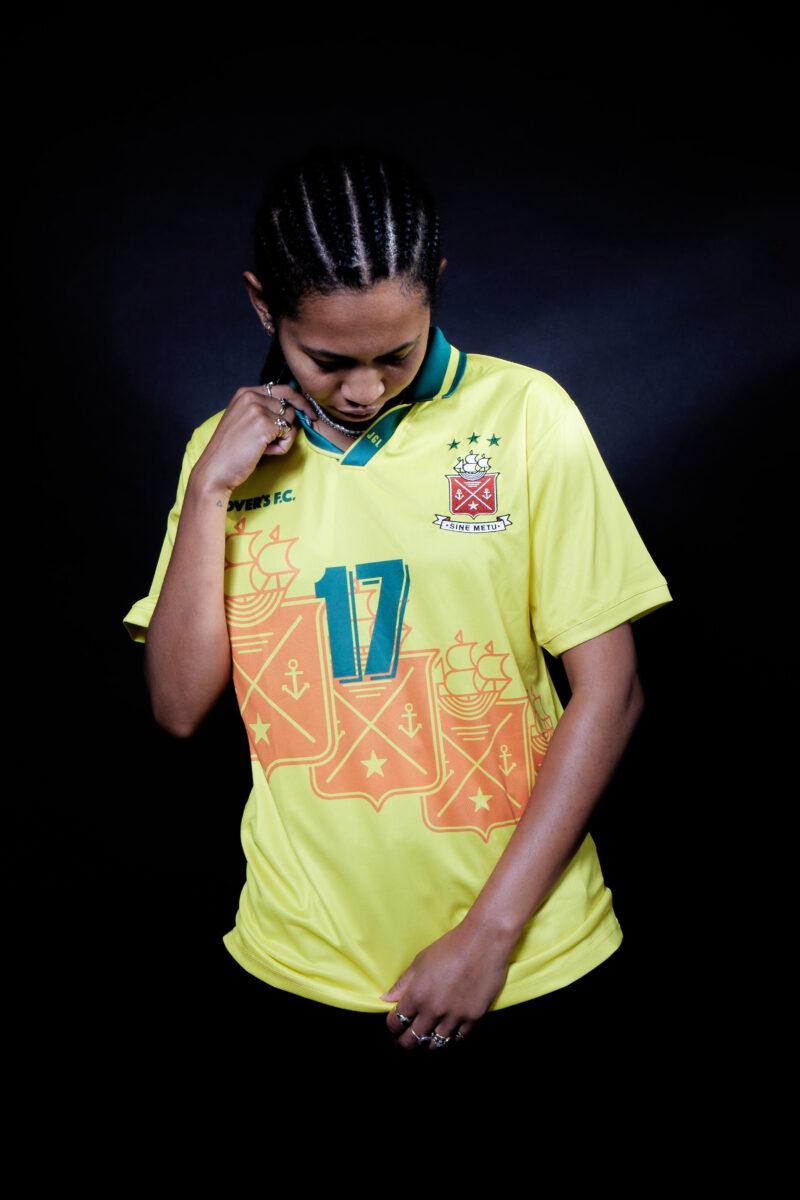 I bet he loved it then when Italy won the competition four years later!

I did as well! By then I had learned, and so was also supporting Italy. But when I look at any World Cup kit I have mixed emotions, I can’t lie.

I think maybe I’m just one of those people who are way too emotionally invested in the game. But ultimately, I think the World Cup is a moment to celebrate with friends and family, it’s also an opportunity for people to learn about one another’s nations and cultures. It’s a time for celebration, usually.

Have you got many kits in your locker nowadays?

I do have a lot of kits, I really do. A lot of Liverpool shirts, and just as many Juventus shirts. That’s the good thing about having dual heritage, you can support multiple teams! I wore a Barcelona shirt at a gig I did in Barça recently and people went mad for it. Like I said earlier, football is such a connector. It’s something that can, in a way, grant instant acceptance. It doesn’t matter where you’re from, so long as you’re donning certain colours, you’re ‘in’.

Do you think that the World Cup helped you to understand the concept of global culture?

Growing up in London, my only interaction with Italian and Jamaican culture was through food and how we lived our lives at home. By definition, I am English because I was born and raised here, but my heritage is so much more than that, and I think something that helped me to realise it when younger was football.

When Italy won the World Cup in 2006, I remember going to Piccadilly Circus with my family and I had never seen so many Italian people in London before. Outside of our house, I only knew of our extended family, or a few family friends who were Italian. I remember thinking, “I’ve grown up here, where the hell have you all come from? I’ve never seen this many of ‘us’ before!” There was a real sense of national pride – and I know, as soon as people start talking about national pride, often they’re dipping their toes in murky waters, but football is different. It’s pure joy. That day was celebratory, and really championed the idea of unity away from ‘home’.

That sense of joy is something I experienced again this summer when the Lionesses won the Euros. The whole nation celebrated that achievement, but it didn’t boil over into something concerning or even dangerous… 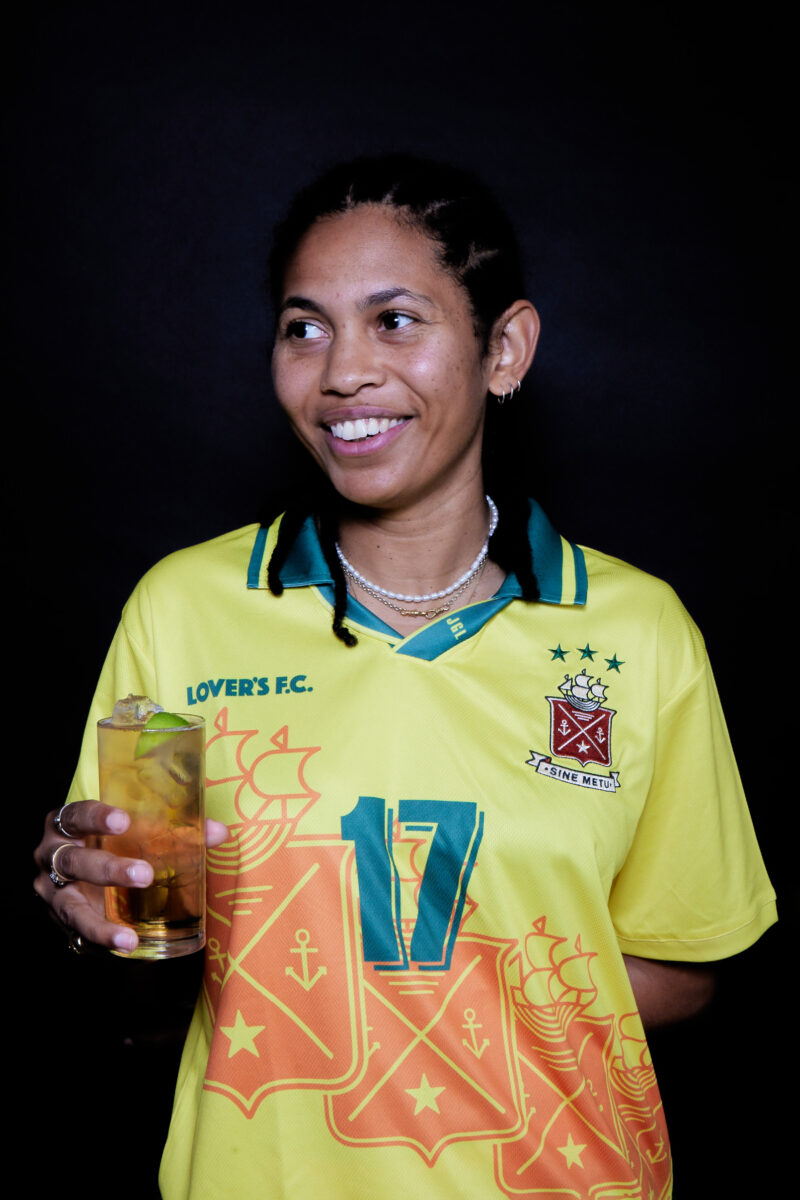 It was a very different vibe compared to the summer before.

100%, and that’s what I’m talking about. Football on that scale – international football – should bring people together, not tear them apart. And the World Cup does that.

Everyone comes together and celebrates football. I think the negative aspects of football and fan culture creep in when it comes to club football, especially. That idea of tribalism in the game, it’s everywhere when you go to a Premier League match for example, and that’s when we see and experience violence, racism, homophobia. All the things we hate about the ‘beautiful game’. But, when it comes to players representing their countries, there’s just that unbridled joy because they’re finally doing something they’ve dreamed about their whole lives.

Other than England, will there be another team you’re supporting?

Well, not Italy and not Jamaica!

I know, I’m sorry! I mean, there are so many other teams to get behind…if England don’t do too well.

Of course I’ll be supporting England, but not quite sure at the minute who else! We’ll have to see.

Do you remember when Nigeria did really well in the last World Cup? Everyone was so gassed for them, man. And that kit! That kit was everywhere.

Speaking of football and fashion, what does that mean to you?

Well, considering I’ve been wearing football kits since I was in the womb…

Like I said, I’d go out in full kit and astros and pretend to be Sporty Spice most days growing up. 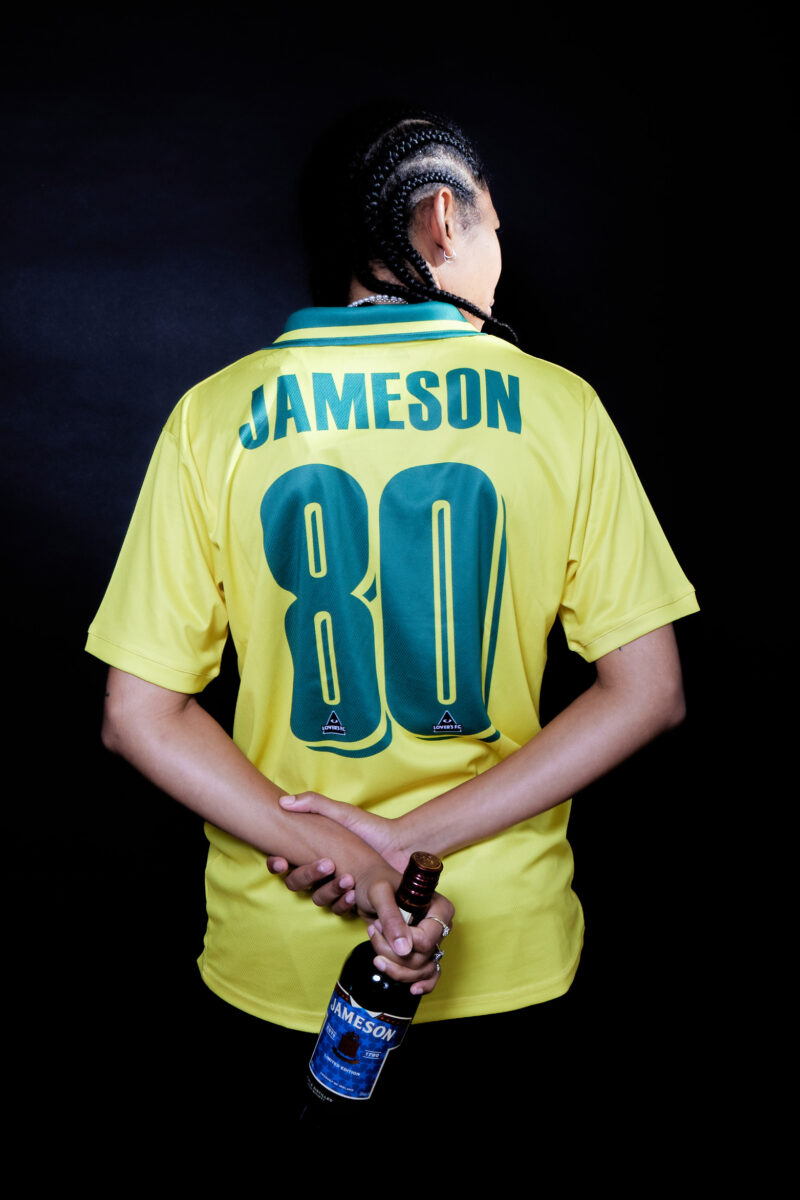 Of course, like us! There’s definitely been this ‘ascent’ of people wearing football shirts as part of their everyday style. I rate it. Can’t lie though, the templates from the 90s and early 00s, nothing will beat those. To be honest…I get that vibe from these Jameson x Lover’s. F.C shirts. You know what else I like about this convergence of cultures?

I really like the fact you’ve got teams walking out to games in suits. Designer suits as well. When you see players coming off the plane, headphones on, suited and booted. It’s so sick! You’ve also got players who take a different approach, someone like Dominic Calvert-Lewin for example.

Yeah, his style is unparalleled. Love the fact he spends his holidays going to places like New York, for NYC Fashion Week.

See! That is so good! I really like the fact that someone like him breaks down gender boundaries when it comes to fashion choices too. You wanna wear a Chanel handbag, go for it. A skirt? Sure, why not! He has of course been slated for it, and we’ve seen some really damaging comments made that have provided an insight into homophobia in football. But…he’s a pioneer for change, no doubt about it.

I feel like, in Italy and France we’ve seen more players over the years really embrace fashion – especially high-end fashion – and maybe we haven’t really seen that as much in England from footballers until recently. We of course had Becks! But now we’ve got the likes of Jack Grealish fronting the cover of The Face and being a Gucci ambassador. That’s mad! Over time, hopefully people will start to appreciate how footballers spend their time off the pitch, because it’s really important. They have massive platforms and can really create good because of them. Even down to ‘little’ things, like wearing the Stonewall Rainbow Laces armband.

I know that some people might call that an ’empty gesture’, but it gets people talking about something that’s really important when it comes to making football an inclusive space for everyone.

What do you specifically like about the kits on offer from Jameson x Lover’s F.C.?

The Brazil kit is just hard. Those colours have always, and will always pop. I’ve got two Brazil kits at home, and they were just made to be worn off the pitch. I can definitely see this shirt being worn on a night out. I’ll look up from the decks, and see someone going for it with this shirt on. I really like the Argentina shirt as well, I am a fan of a football shirt having a collar. The material feels really breathable as well, and that’s really important for me as a DJ because clubs can be very sweaty places.