Welcome to ‘The Shape Up’ – a new content series that sees some of the most talented, influential and trailblazing barbers discuss their journeys and the importance of football within the barbershop community. Football is a game that connects people from all walks of life – as does the barbershop – so it’s no surprise that the space is one where football is such a hot topic and so influential. Within the last two years, a select group of barbers have risen to fame for the game changing trims they’re offering up to the biggest ballers of our generation. This series explores the origins of this cultural phenomenon, and talks on why elite barbers are a baller’s best friend.

Dominic Othol – a.k.a. Smokey – is a barber who loves his community and his shop in Surbiton has become a must-experience destination in South West London. Known for his distinctive gas mark and slogan ‘Just Got Smoked’, Smokey prides himself on delivering the best trims in the game and can count some of the biggest ballers of our generation in his client list.

But despite serving up trademark shape ups for the likes of Jadon Sancho, Tammy Abraham, and Marcus Rashford – Smokey Barbers is most definitely by the people, for the people. His story started when he picked up a pair of clippers to start handing out trims to inmates while in prison, and he’s never lost sense of what it means to give people a chance to better themselves. Putting on for the community is a major motivation.

The latest big look for Smokey Barbers centres around FIFA 21, when EA Sports took over his barbershop – along with HD Cutz – to celebrate the drop of the world’s greatest football game, and handed out free trims inspired by the biggest ballers in the game. We went down to Smokey’s to find out more about his story, why he thinks barbershop culture has taken over football, and get a first look at FIFA 21. 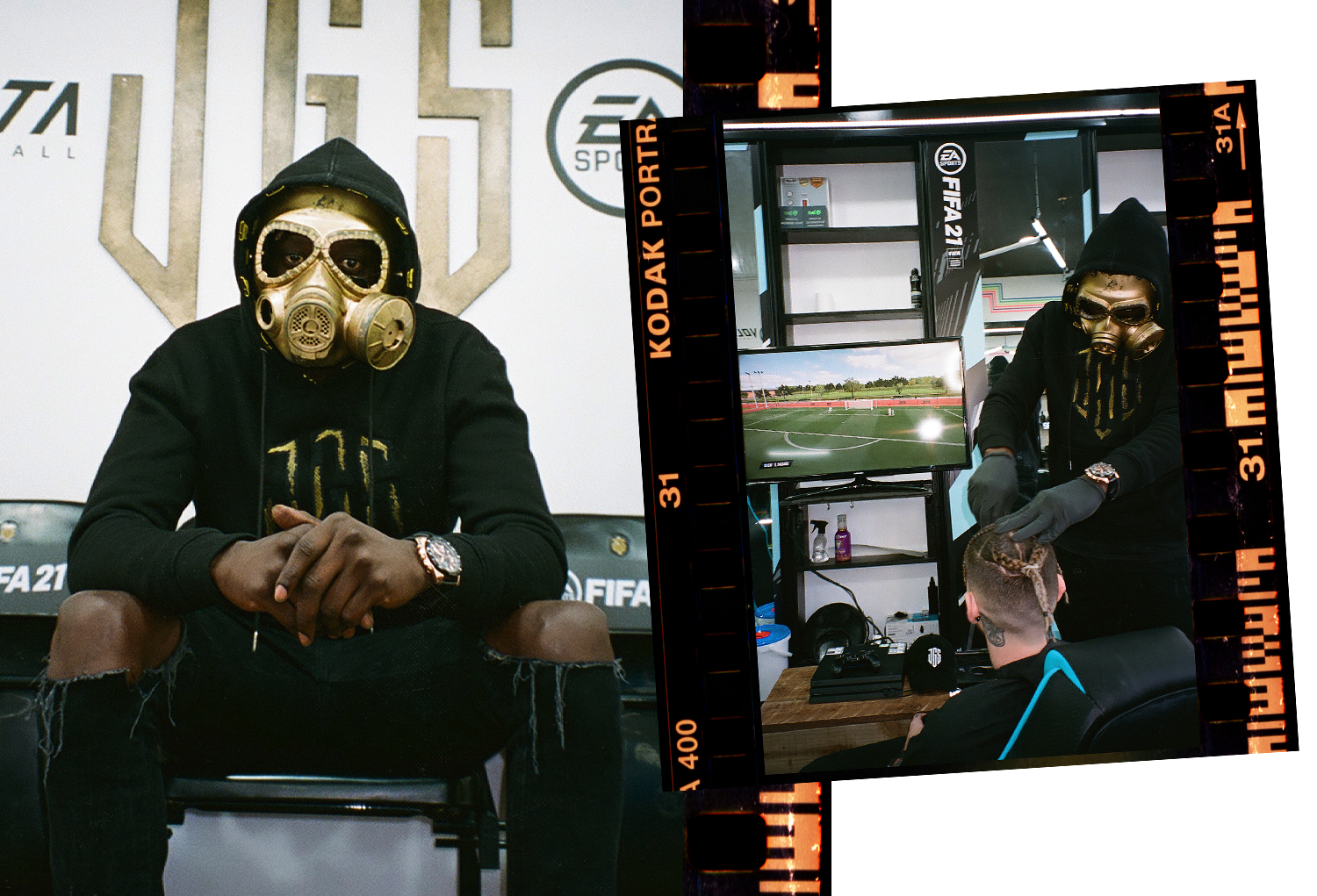 VERSUS: Everyone knows about this special connection between ballers and their barber right now. What does it mean to you to be a certified “Baller Barber”?

Smokey: I’m not just a baller’s barber! I do trim ballers but to me they are just human beings like everyone else. They need a certain kind of attention, but they aren’t different to any other human being.

Football and barbershops go hand in hand. What’s it like in your shop during matches?

It’s hectic to the point that sometimes I just turn my phone off. You know how it gets! We’re here talking about how Liverpool, Arsenal, Chelsea or United are gonna win, but if you support any of them teams and they lose? Ah, it’s peak for you. If you flip it around, some clients come into the shop on a Friday and are talking the wickedest of talk saying their team is gonna win, and then they lose. Sometimes, I may not see them for a good three weeks! It gets really hectic but it’s a subject everyone can get involved in.

Why do you think the barbershop became a safe haven for football debates?

Who was your first baller client?

Nathaniel Chalobah and Ola Aina. These guys gave me a lot of time in terms of getting the brand out there, getting everyone known and just making sure other ballers come to us. The first inspirational haircut that motivated me to do what I’m doing came earlier on in my career and that was George Weah! Just the fact that someone like that, an African Ballon d’Or winner can come into the shop, sit down and have a conversation with me and tell me to keep going…that was a big inspiration. Most of these kids don’t know George Weah like that but he’s the President of Liberia now. If he can go on to achieve that, and he believes in me, that’s just the greatest motivation ever. 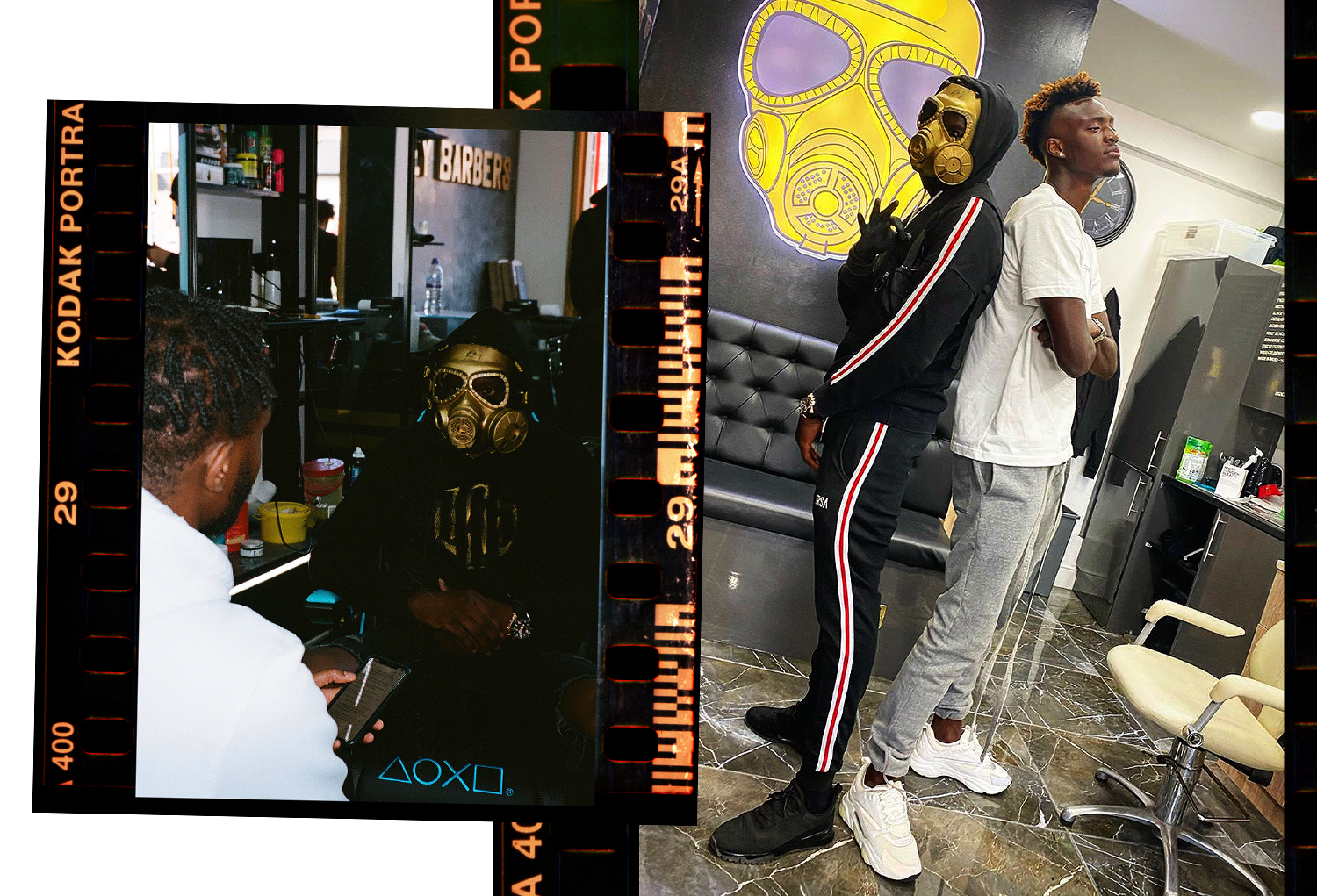 What’s been your favourite all-time trim?

Favourite trim? I have a few! My favourite moment if I had to pick was just spending time with Ronaldinho, colouring his hair and cutting it! It wasn’t my favourite trim but just knowing the nerves and everything leading up to it. It was just so massive. I got the phone call and thought it was a joke. I picked up the phone and was told “yo you’re gonna cut Ronaldinho, but you can’t tell anyone he is in the country”, straight away I’m thinking “am I the only one that knows he is in the country?!”

It was so unreal. I’ve opened the door and seen a player I’ve been watching all this time and they’ve left him with no security. I was just sitting there thinking…is this real? But when you meet people like that you get to realise, they are just normal people. I remember asking him if he meant the free kick against England. Things like that, you don’t usually get those opportunities, especially if you are from where I’m from.

Your client list is strong! Who’s your favourite right now?

There are two people for me who have stood out. The first one is Rashford, it’s only now that people are seeing what he is doing but I’ve known this from when I first met him. He’s different! Humble, grounded and you can see it’s not just about football. It’s more than that. He wants to do something beyond his career in football and utilise his power in the right way. Another one is Sancho, I started trimming him when he was at Watford. He was so young then and to see what he has done, moving to Germany and performing, he’s creating something that’s completely different and opened doors for a lot of people. I remember him being scared and nervous and you could see it in his eyes, but you could also see he wanted it and now he’s done it. He’s achieved.

What’s your relationship between you and all the other big baller barbers? Are you mates or is there friendly rivalry?

I have mutual respect for all of the barbers. I’ve always said no barber is in the lane of what I’m trying to do. They can compete with themselves, but my lane is completely different. I just know I give back to the community. I’m more from the community. They understand my journey. I’ve gone through the ups and downs that most of them have gone through, I’ve done the shotting they have done, I’ve done whatever you can think off. What I’m doing in the community is way different to what any other barber is doing. I know most barbers are trying to make money for themselves or put food on the table for the families. I’m not driven by the money or all of that, for me it’s about how many opportunities you can create for these little kids. That’s why we have a stronger goal and aim, and why we are gonna push harder and do things in a bigger limelight because of that whole feel. 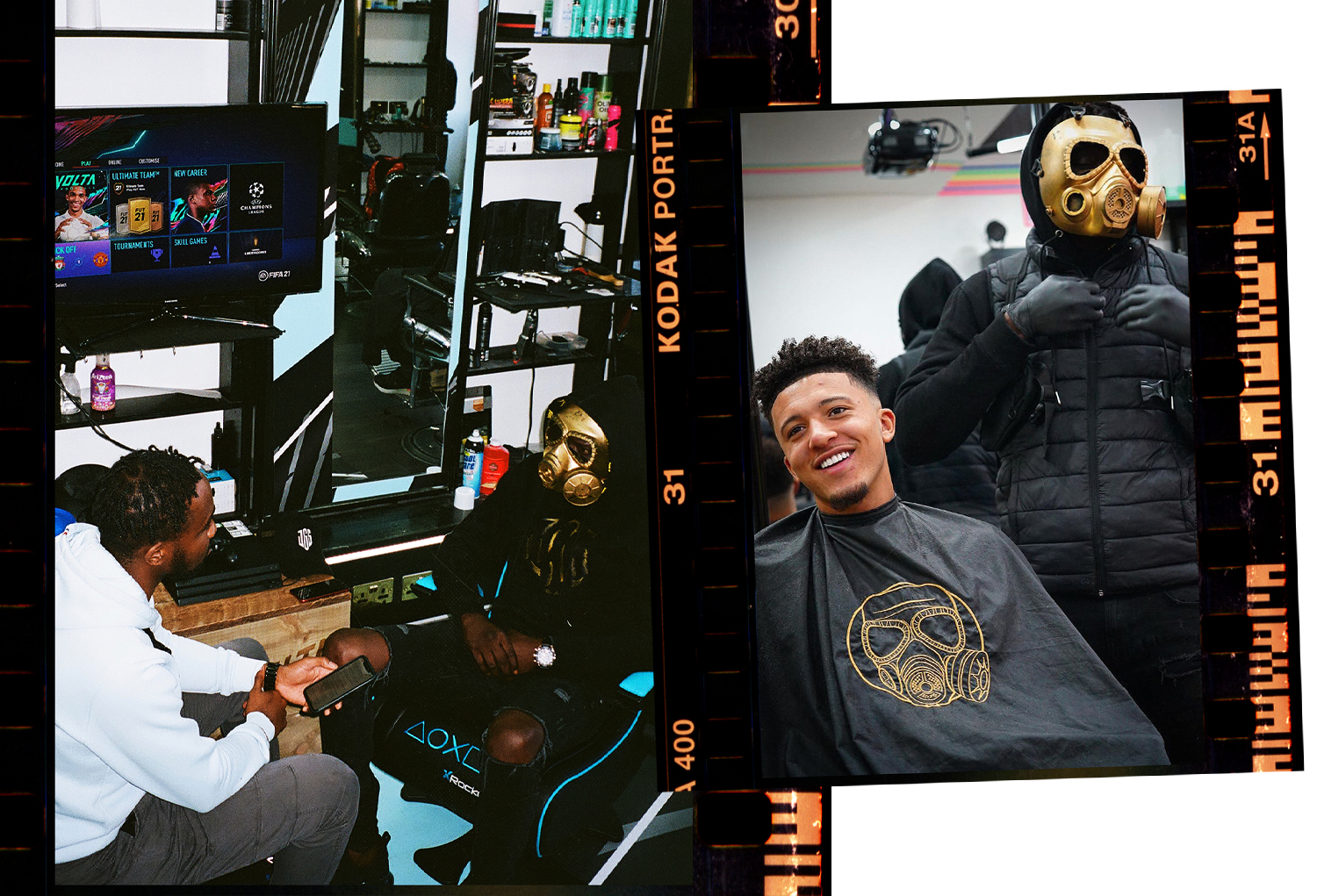 Why does community mean so much to you? Social responsibility seems like a big part of what you represent…

I’ve come from a background where I’ve had to be everything you can think of. I’ve been stabbed and nearly lost my life. I was stabbed six times – but I’m still here and still breathing. I’ve done all the things you could think of in terms of the bad stuff. I’ve done all of the things like try and play football but not being able to play games because my dad was African and didn’t want me to play. Little things like that made me realise what we need to do for the community in terms of helping the younger generation understand that they can reach their goals, and the only way they can do that is by putting things in place to make sure they can do it.

As you can see within the barbershop, we try to get the young kids off the roads and show them, earn that good money. You don’t need to be out there doing the trap life and everything else, then having to watch over your shoulder. Come here and we will guide you in the right way. If it’s not barbering and it’s football you like, and like myself you have parents who didn’t push you in the right way, we’ve built an academy and we take boys off estates. To this day we’ve put 36 of our own kids into academies. We’ve been doing this since we started. We give kids that chance, that extra push to kick on so they can go and reach their goals and achieve them. Knowing I didn’t get that support and I wish I did when I was younger, it makes me wanna give back.

As a barber shop, we provide that. We have kids that are older now that started at 14 or 15, now they work with some of the people we watch. Why? Because we gave them that opportunity, guidance and support. It’s all about belief. It’s nice that now a lot of people are seeing this and trying to help out. Sometimes our clients come in and ask if we have any young kids that they can take on as apprentices. Having that network that we can push kids through means so much. That’s why we do it for the community.

Every barber has a signature move. What’s yours?

Everyone knows mine. It’s when I flick the clip up and catch it. That’s my little way of saying you just got smoked! Soon as you see that flip, you just know. It came to me naturally. I do some weird things with my clippers. You know how people say make the ball your best friend, I’m the same with my clippers. I’m at home sometimes just sitting with the clipper, making it land in crazy places. Just have to get used to your clippers. If you like your job, you just have to get used to what you handle.

You’ve got the shop kitted out with FIFA 21 right now. If barbers featured in FIFA, what would you rank your shape ups, clip handling and finesse? What would be your overall barber rating?

Clip handling, I won’t lie, 98. Shape ups in the 90s somewhere. Finesse? I won’t lie, you have to give me a 99. Overall, I always keep it nice and humble. I would say 83 and working hard towards improving. That’s just me being real, I’ve got a lot to learn.

What’s your personal relationship with football and FIFA like?

Football means a lot to me. it brings everyone together. I wish we could do more tournaments but COVID has limited that. Football is an avenue that a lot of kids can benefit from. It can take them away from doing the wrong things. FIFA is a big thing for me. In FIFA 21, I just hope they change the dynamics for Pro Clubs. It already feels quicker and more realistic. From crossing you can head the ball! I would love to see FIFA make Pro Clubs bigger and have a more developed league system or something.

EA SPORTS FIFA 21 is out on October 9 on PlayStation 4, Xbox One and all other platforms. Get 3 days early access, special FUT kits and much more if you pre-order today! Head to EA now.