This is a once in a lifetime tournament, so find your 'home away from home' and support a second nation this summer. To help you, we've linked up with VISA to bring you everything you need to know about the tournament's biggest teams. This time, we take a look at the Netherlands. 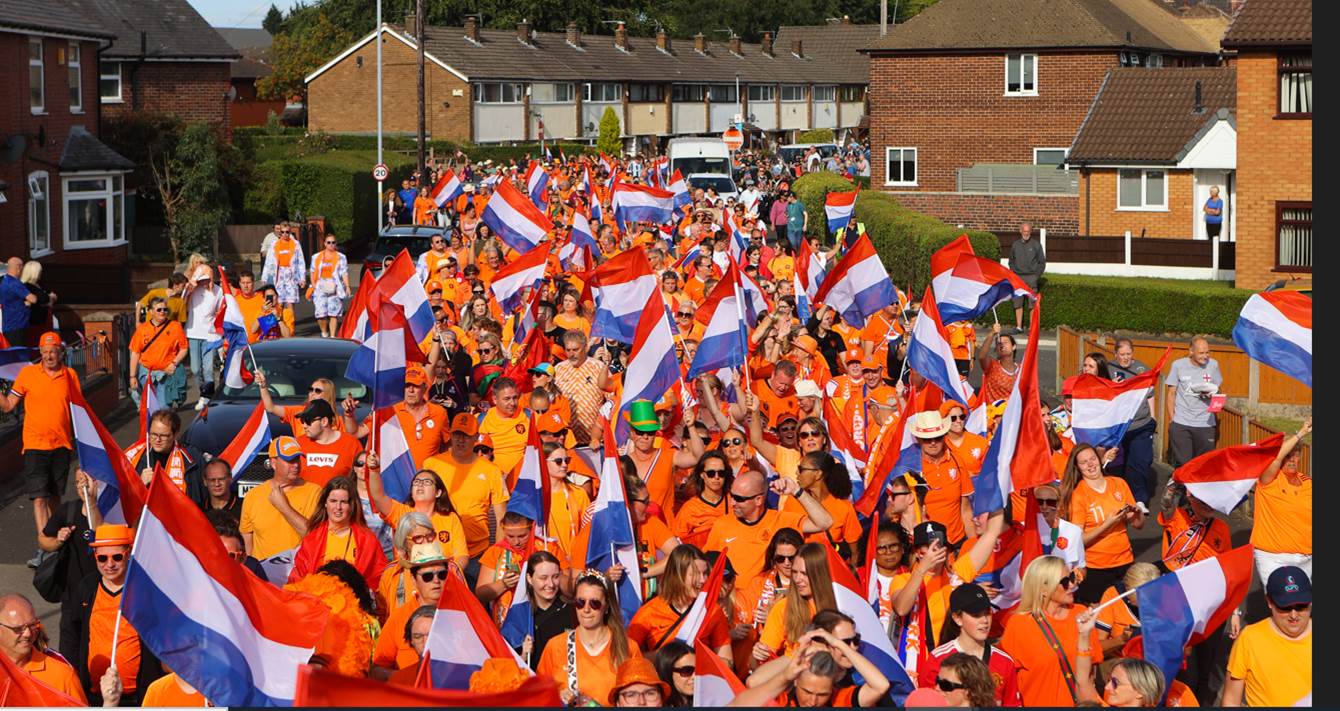 Known as the Oranje Leeuwinnen – ‘Orange Lionesses’ – the Dutch team have some of the most passionate and vocal fans in the game, with their fan walks before kick off the stuff of legend. And they’ve got good reason to be proud, with an elite squad of ballers who have roared their way to the top of the women’s game since making their UEFA Women’s EURO debut in 2009, claiming a bronze medal. The Flying Dutchwomen went two steps further in 2017 when they were crowned European Champions on home soil. Led by Sarina Wiegman, their European dominance transcended the continent as they reached their first-ever FIFA Women’s World Cup final in 2019. 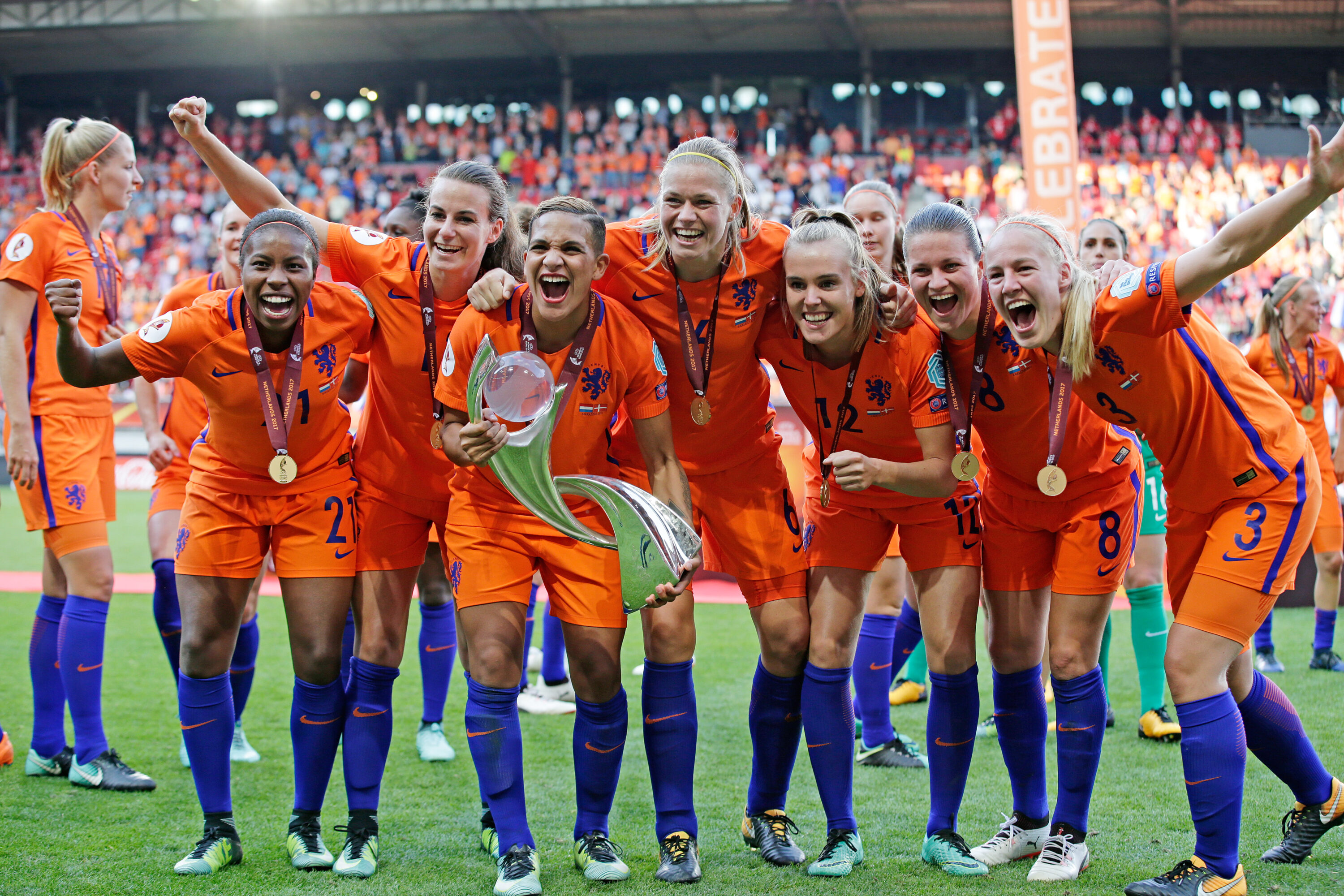 Although they might have lost their managerial taliswoman to England, this side are still one of the favourites to reach the final stages of this summer’s competition, and possibly retain their title. Something that’s more than possible for a team that boasts the likes of Lieke Martens, Jill Roord and Daniëlle van de Donk. 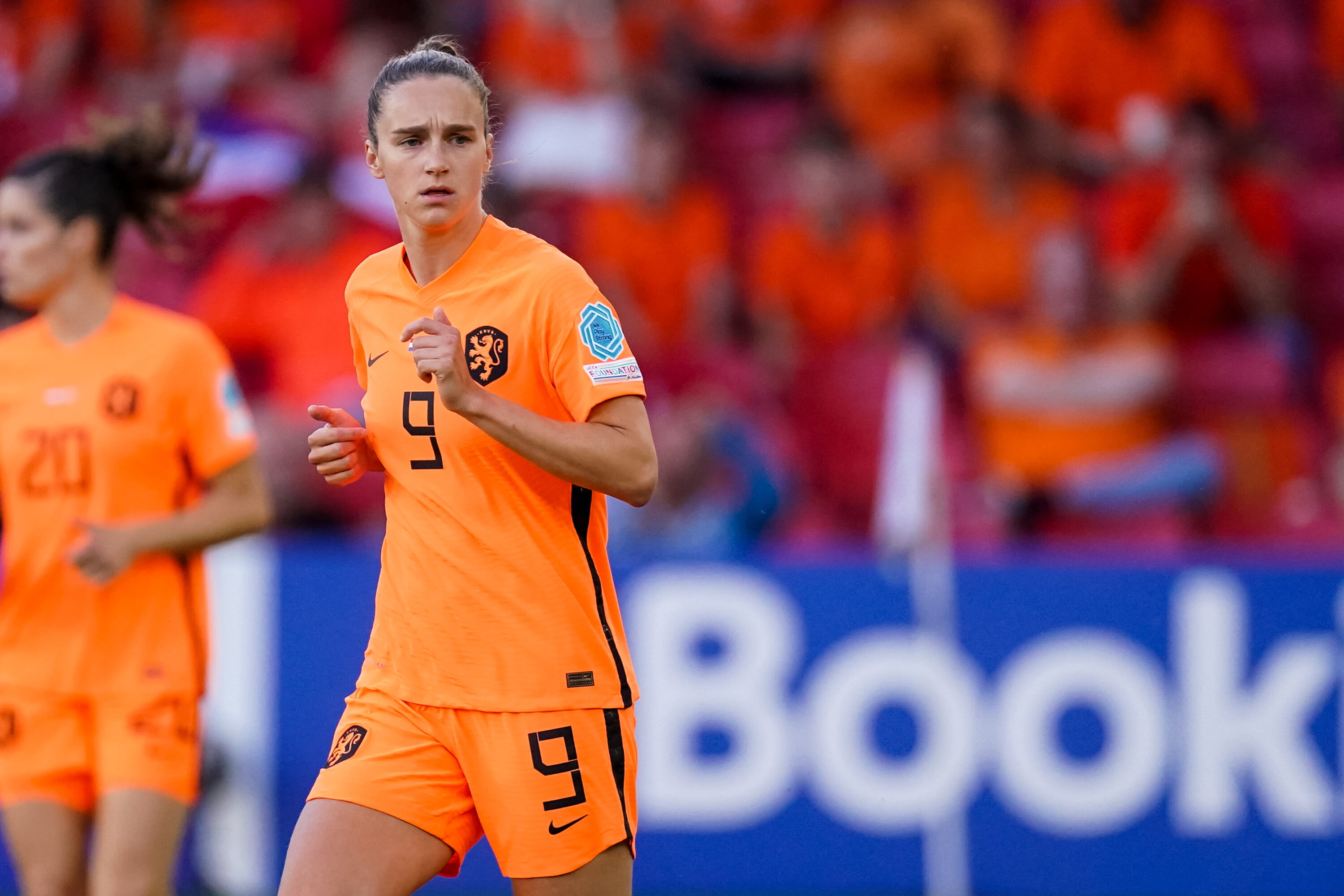 The Netherlands attracted over 21,000 fans to their opening UEFA Women’s EURO game at Bramall Lane with a lot of those fans travelling far and wide to witness one of football’s biggest icons play: Vivanne Miedema.

At just 25-years-old, Miedema is already Holland’s all-time top goalscorer. Having beaten the record previously held by Dutch legend Robin van Persie. 94 goals in 112 appearances. Miedema is more than a generational talent, she is simply one of a kind. The 2017 UEFA Women’s European Champion and 2019 FIFA World Cup finalist has torn up every league she’s ever played in. Back-to-back top scorer in the WSL from 2018-2020. Two-time UEFA Women’s Champions League top scorer. BeNe top scorer. VM9 needs to permanently change the colour of her boots to gold the amount of goals she scores week in, week out. The Ballon d’Or nominee has always said she doesn’t pay too much attention to individual accolades, so best believe she’ll be hellbent on making sure her team retains their European crown this summer. 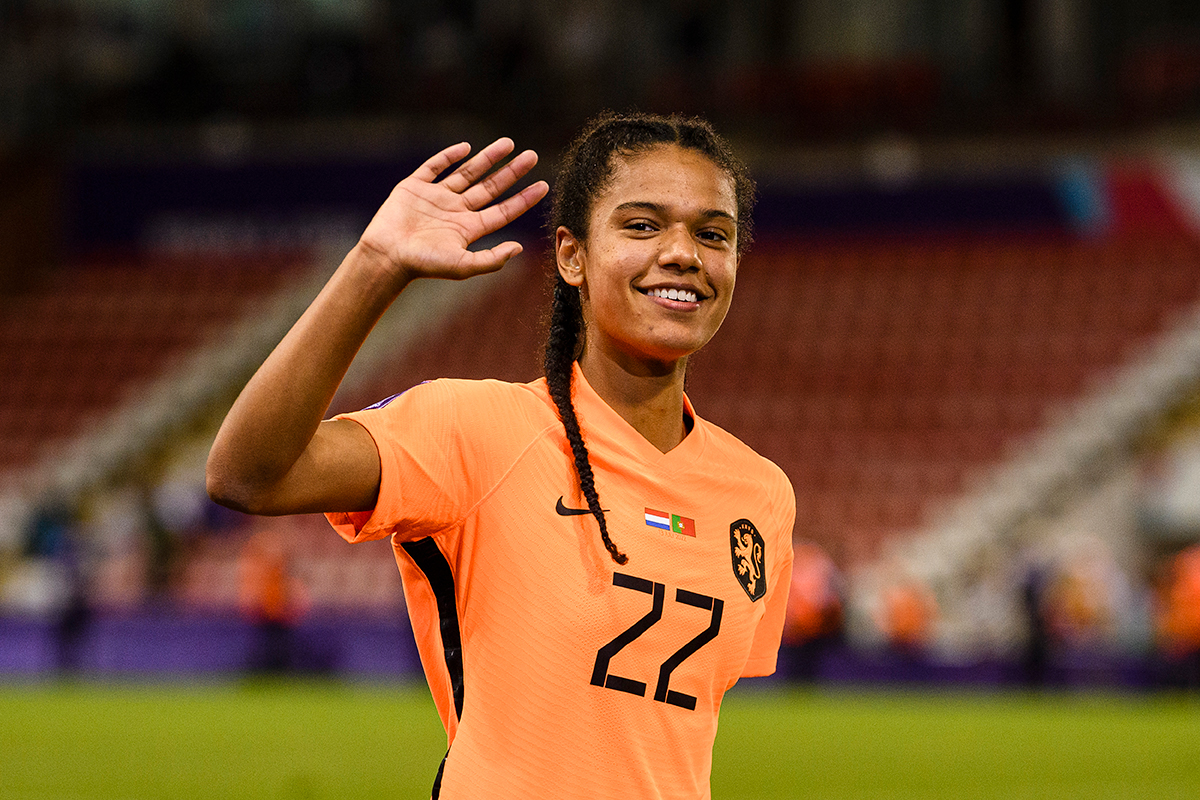 We need to talk about Esmee Brugts. The prodigy of PSV is already making waves across Europe and has her sights set on glory this summer. Turning heads at Le Tournoi, Oranje boss Mark Parsons had no choice but to choose her. A versatile player who can tear things up down the wing, play pannas across the park and play as a No.10. Brugts has it all. Surrounded by some of the game’s modern-day greats, Brugts will act like a sponge this month and soak up everything she can from her fellow teammates. Eindhoven’s Electric Esmee is already sending shockwaves through her WEURO opposition. Watch her go from a burgeoning star to a supernova. 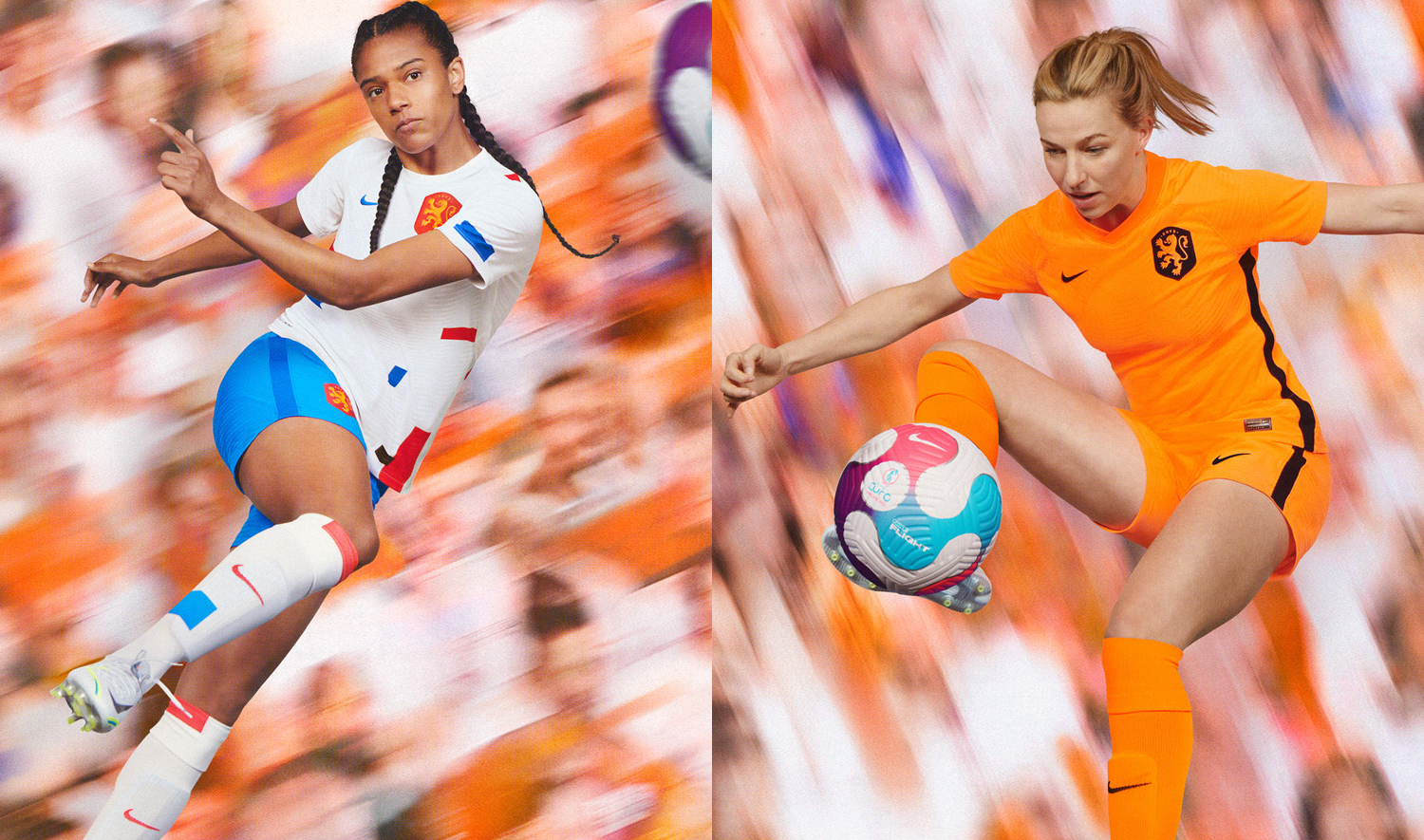 Donning their iconic Oranje, the Dutch Home kit is as bold as ever. Its black trim is coupled with a black badge and Swoosh to break up the orange palette. Once again, the shirt’s design replaces the KNVB lion with a lioness in honour of the Leeuwinnen. But it’s the Away kit that’s been turning heads this summer.

Paying homage to homegrown artist Piet Mondriaan, the kit features red and blue geometric shapes that fly the home flag high. It’s a modern classic, and another example of art and football going hand-in-hand. Simple yet abstract, reflective of Holland’s gameplay, this shirt is a modern classic.

On July 23, Netherlands will take on France in the Quarter Finals of UEFA Women’s EURO 2022. Follow @WEUROTicketing on Twitter for the latest news on available tickets.