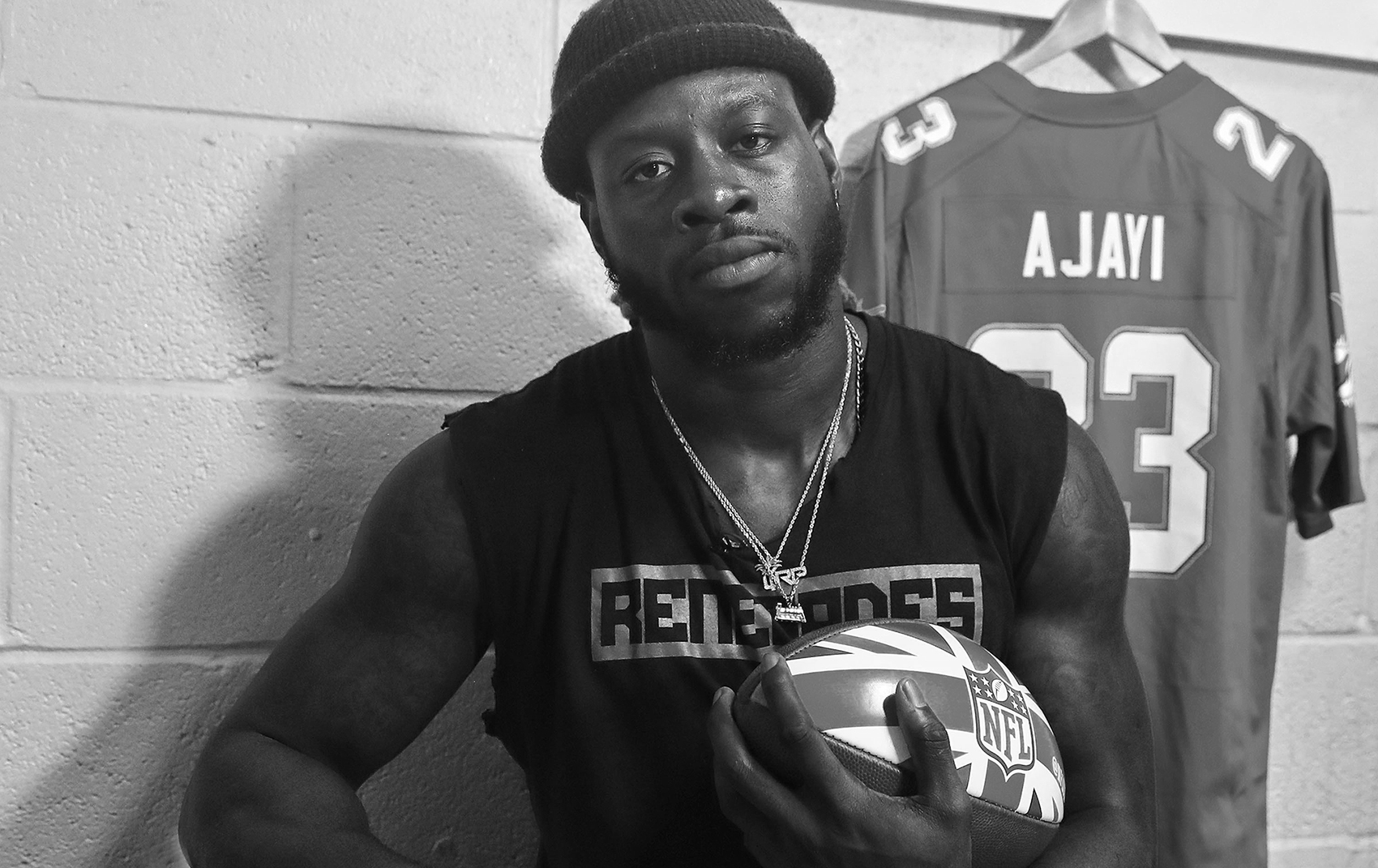 “I swear sports and music are so synonymous, ’cause we want to be them, and they want to be us.” — Drake

This time out, we spoke to Hackney-born Miami Dolphins star Jay Ajayi about the music that shaped his life and times ahead of his team’s showdown with the New Orleans Saints at Wembley.

VERSUS: How important is music to you on gameday?

Jay Ajayi: Music plays an important role in my whole life. I don’t think I could live without music. If I’m training in the gym, I’m listening to music and if I’m driving, I’m listening to music. The two just go hand-in-hand for me. On gameday music gets me in the right zone, it calms me down or pumps me up.

What’s the vibe of the music you listen to in those moments?

On the bus to the stadium it’s a bit more relaxing and wavy – some mellow Kendrick tracks, music that’s focused more on lyricism. When I get to the stadium and get a sweat on before the game, I listen to my hard hip-hop and the stuff that gets me in the frame of mind to go to war…stuff like Future, Drake, Rick Ross. A bit of grime, too. My playlist is pretty solid.

I notice you’ve got a photo with Kendrick on your Instagram. Are you a huge fan?

Yeah I was able to go to a show and we got introduced by some mutual friends. That was a very cool experience. I love ‘DAMN’, that’s his best work to date in my opinion. I’ve had that on repeat! 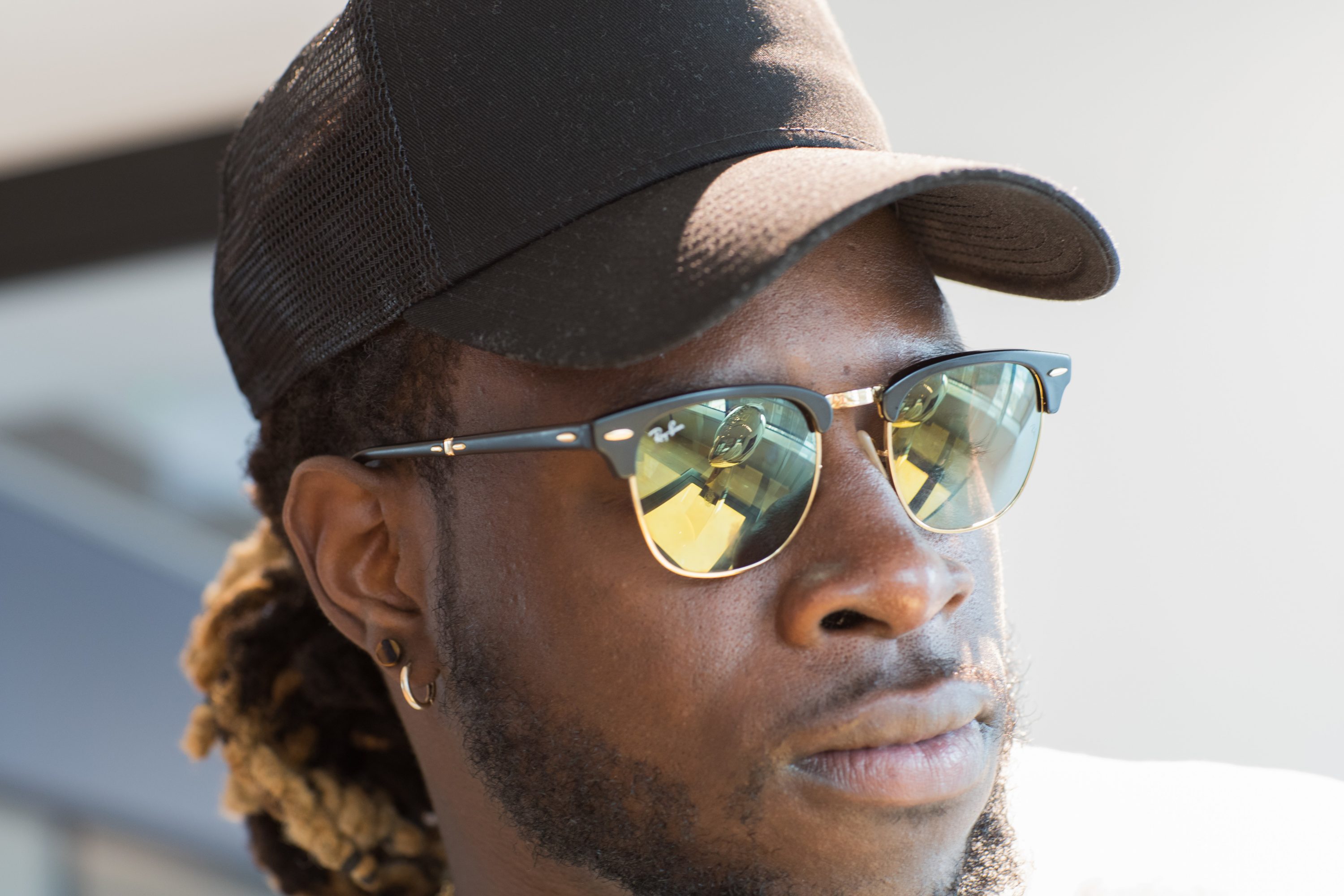 “It’s great Drake is working with UK acts…it raises eyebrows in the US.”

You’re a guy from Hackney who’s obviously living in the States. Have you been keeping a close eye on the UK scene from afar?

I definitely try to stay current. With my roots being in London, I’m always following GRM Daily and I keep locked on Spotify’s grime playlist. It’s important to me. Grime is so different from US rap, people in the States still can’t get used to it. It’s great that we’ve seen Drake working with UK acts…it raises eyebrows in the US and I’ve seen people research Skepta and Giggs after hearing ‘More Life’. That sort of stuff is a bridge for people worldwide to discover our sounds.

Has it got to the point yet where Skepta, Giggs or Dave have made their way onto the Dolphins’ stereo on gameday?

I’ve actually been in the locker room a few times and heard grime playing. The main guy I’m thinking of is one of my teammates, Cam Wake, and I know he’s rating some UK sounds. I respect him for that! I think if you truly respect hip-hop and rap for what it is, I think you’ll respect the journey grime has been on and the struggle that the people involved have been through. The stories of the two genres and the acts involved have similarities, in my opinion.

I’ve seen J Hus keeps popping up on your timeline.

Yeah! My cousin put me on that album as soon as it dropped. It’s an amazing album. I think everything on ‘Common Sense’ – the instrumentals, the lyricism and the overall atmosphere – was partly a nod to Nigerian heritage and culture. It was an album that had a lot of national pride, I think.

When was it that you made the move to the United States? I guess that impacted the music you got the chance to discover.

I moved in the year 2000, I was about 7 or 8-years-old. I remember listening to 50 Cent’s ‘Get Rich or Die Tryin’’ and that’s what we were listening to…that was actually one of the first albums I vividly remember. I grew up listening to American rap artists, even when I was living in the UK as a young kid. I didn’t get introduced to the UK scene until I was much older.

You’re one of adidas’ banner NFL athletes in the UK. What have you made of that brand’s attempts to fuse sport and music in the last 12 to 18 months. We’ve had Desiigner doing bits with Man United, Stormzy and Pogba…

Oh my God, I watched that Stormzy and Pogba thing on repeat because I need to get something like that! Those videos were amazing. They merged grime and soccer perfectly. Desiigner does bits with the NFL in the same way and it seems so effortless, our worlds work together so well because there’s a real mutual respect.

If you could collab with one artist in a similar way, who would you choose?

I’d probably work with Dave. That’d be dope, I like his music a lot and he feels like such an artist…I think we’d connect. Even doing something with Wale would be dope.

Oh I’m a big follower and fan of Wale’s music, he was actually one of the first rap artists I was introduced to in America. I moved to Maryland and I was living with my cousins and they were playing a Wale track for me back in the day, that was actually one of my first experiences of American hip-hop of that era. And he’s Nigerian and I am, so we’ve had a connection because of that. He’s also a big football fan.

Jay Ajayi was speaking to VERSUS ahead of turning out for the the Miami Dolphins against the New Orleans Saints this Sunday at WEMBLEY stadium as part of the 2017 London Games which will be shown live on BBC2.