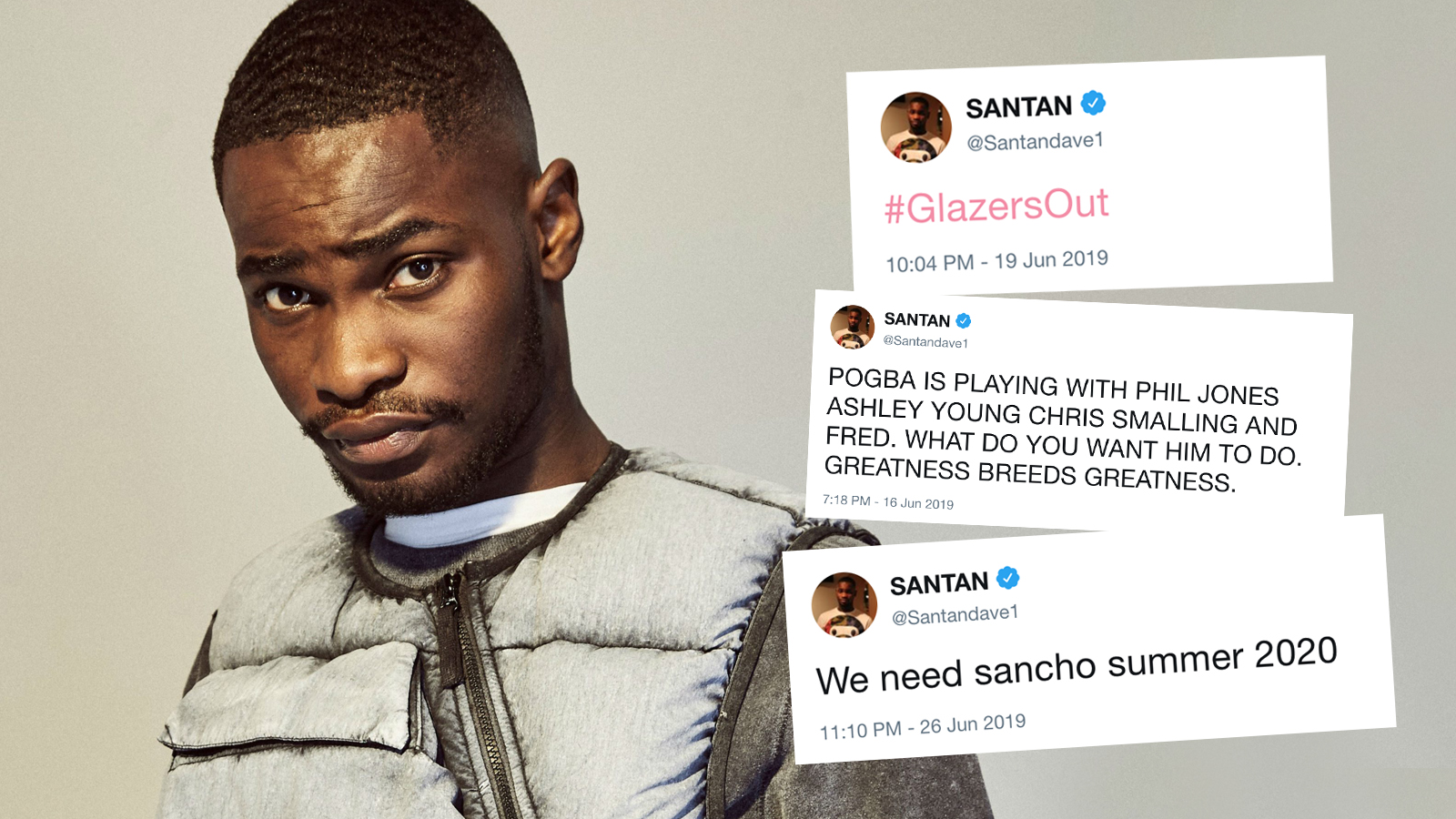 Dave is a man of many talents and achievements but his latest move has seen him take things to a whole new level.

The rapper’s beloved club have found themselves in a sticky situation this summer after Ed Woodward’s plan to bring in a Director of Football went nowhere, but Santan is doing what he can to step up and fix his club.

No stranger to dropping gems on the mic, Dave has shut down Football Twitter the last few weeks with killer takes on everything at Old Trafford.

From acting as “Agent Dave” to bring Wan-Bissaka to the club, through leaping to the defence of Paul Pogba on more than one occasion, and also ethering the Glazers, Dave is putting things right at Manchester United one tweet at a time. Man United need to #AnnounceSantan.

Me on the phone to wan bissaka right now pic.twitter.com/CFXYB1xazc

Dave’s tweet, earlier on this month, led to Wan-Bissaka following him, which in the year of 2019 can be read as good as an official transfer announcement from @ManUtd TBH.

And as we all now know Wan-Bissaka has since transferred from Crystal Palace for £50 million and signed the longest contract (six years) ever given to a player at Old Trafford.

On more than one occasion he’s backed Paul Pogba and has done so agains recently amid rumours of the Frenchman’s impending exit.

WHAT THE FUCK IS THIS. IS THIS NORMAL. Our centre midfield player having the highest statistics in every part of the game. SOME OF OUR PLAYERS ARE LAUNCHING MERCHANDISE. ALL A MAN WANTS TO DO IS DAB IN PEACE AND YOU LET THIS MEDIA AGENDA CHASE HIM OUT. WE DONT HAVE BALLERS. pic.twitter.com/Lvutuv832J

REAL MADRID LOST CR7 AND THEY WERE WOTLESS. HE HAD MODRIC BALE KROOS VARANE RAMOS MARCELO THE LIST GOES ON. POGBA IS PLAYING WITH PHIL JONES ASHLEY YOUNG CHRIS SMALLING AND FRED. WHAT DO YOU WANT HIM TO DO. GREATNESS BREEDS GREATNESS.

Imagine playing centre mid. Your defenders can’t pass to your feet. Your attackers can’t finish the chances you’re creating. Your fellow midfielders can’t create chances or win the ball. You have the highest stats in every field. But somehow you’re the bad guy. #FREEPOGBA

We’re firmly behind the #FREEPOGBA agenda.

Dave has pulled no punches when it comes to United’s current regime.

Fuck Ed Woodward. Good morning and I’ll be getting to work.

As a young guy who grew up on the success of Sir Alex Ferguson, can you blame him?

Regardless Dave is putting in the work for the club he loves.

He’s already set his sights on securing Sancho in the summer of 2020.

And teased who he sees as being the answer to United’s woeful defensive options.

With the transfer window closing on August 8th, Dave has got his work cut out from here until now. So to help him out, he can check our round-up of Europe’s biggest young ballers to watch out for in 2019.