Welcome to ‘The Shape Up’ – a new content series that sees some of the most talented, influential and trailblazing barbers discuss their journeys and the importance of football within the barbershop community. Football is a game that connects people from all walks of life – as does the barbershop – so it’s no surprise that the space is one where football is such a hot topic and so influential. Within the last two years, a select group of barbers have risen to fame for the game changing trims they’re offering up to the biggest ballers of our generation. This series explores the origins of this cultural phenomenon, and talks on why elite barbers are a baller’s best friend.

Sheldon Edwards – a.k.a. HD Cutz – is a barber who’s renowned for his High Definition and as a true innovator for how he's connected barbershop culture and the beautiful game. Based in Clapham, South London, his shop is a haven for football. Upon entry, your eyes are drawn towards HD's own personal wall of fame – highlighting the huge wave of elite players he's delivered trims to down the years – while games of FIFA are on constant rotation in the background.

HD Cutz might boast the biggest roster of baller clients of any barber in the game. From established hitters like Raheem Sterling and Pierre Emerick-Aubameyang, to hungry Young Lions like Jude Bellingham and Callum Hudson-Odoi, Sheldon has been responsible for adding an original wave of personality and style to football's new era.

The latest dub for HD Cutz is a link up with EA Sports and FIFA 21. The world's biggest football game took over HD's store last week to celebrate the new drop and deliver free trims inspired by some of the ballers HD has previously trimmed. We went down to HD's to uncover more about his story, what he talks about with ballers when they're in the chair, and why FIFA is an essential barbershop vibe. 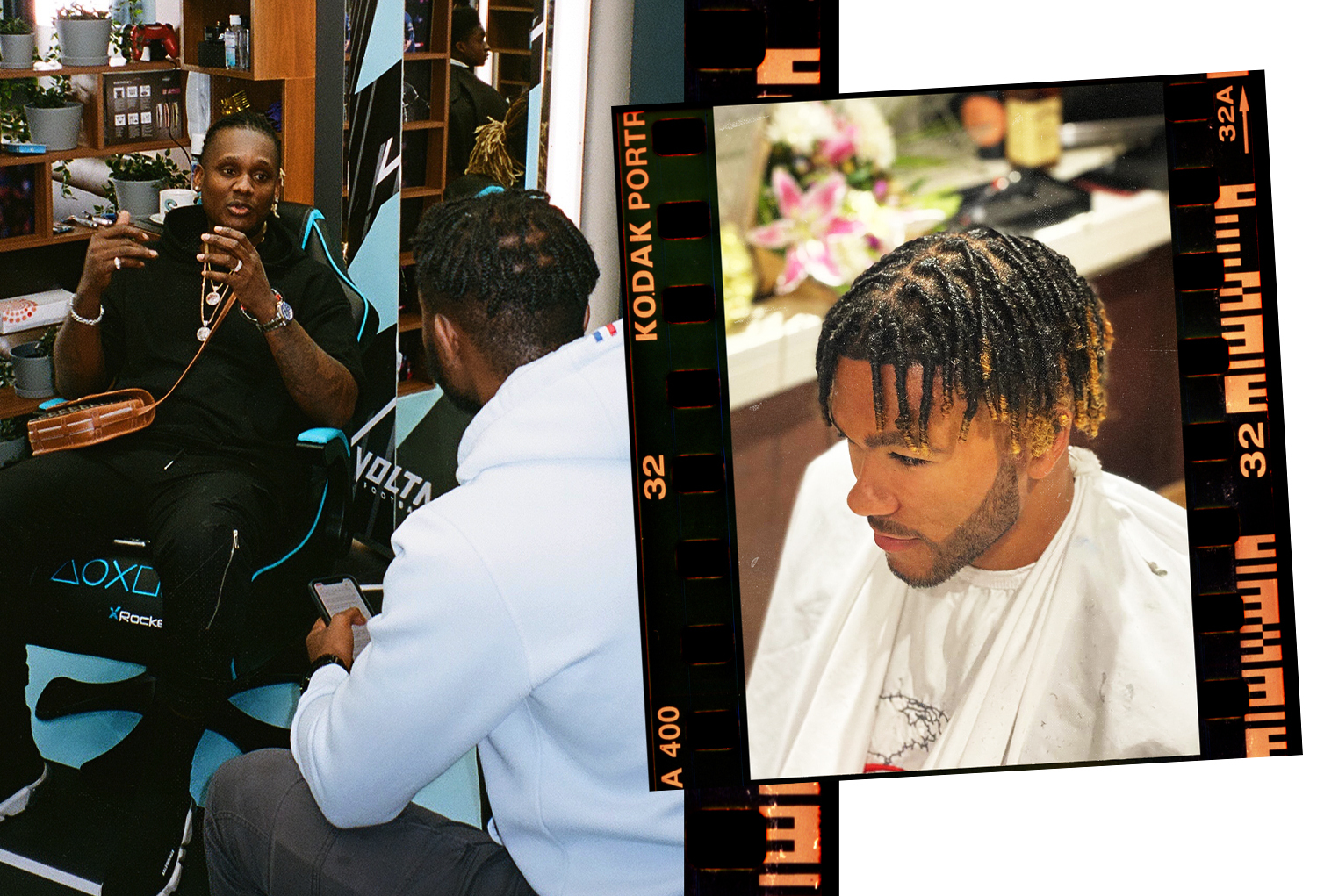 VERSUS: Everyone knows about this special connection between ballers and their barber right now. What does it mean to you to be a certified “Baller Barber”?

HD Cutz: What does it mean to be a barber is the real question for me! It feels good to change and transform someone’s entire look and give them a great feeling. To be a baller’s barber? It’s good to know that your haircuts are on screen on a weekly and daily basis across the world. It’s also great when you see people commenting and leaving great reviews on the job that you’re doing. It makes you realise that there’s great expectations on what you do, and you have to keep setting the levels.

Football and barbershops go hand-in-hand. What’s it like in your shop during matches?

It’s crazy! There could be up to six different sets of supporters in here at any given time, between our barbers and our clients. It’s great jokes between everyone whether your team is doing well or not but if your team is doing horrible, boy, you’re in the hot seat and you’re gonna get fried! Football is a massive part of the barbershop and how things operate.

Why do you think the barbershop became a safe haven for all kinds of conversation?

People know it’s an environment that feels like home. The barbershop is actually a massive part of someone’s mental health. We help people overcome barriers, whether it’s insecurities in how they look, or talking about issues they could be having at home for the first time. We help take them over that line.

Who was your first baller client?

My first baller client wasn’t actually professional at the time! It was Michail Antonio. He’s a client that I’ve been doing since he was nine-years-old. If I was to say the first actual baller who was popular, it would have to be Moussa Dembele. When he came into the shop nine years ago, the brand became a footballer’s best friend.

What’s the journey been like to this point? You’re now a global brand! Did you ever see this coming?

Long before I started traveling around Europe to cut hair, even before I started taking trains to different clubs, I spoke this into existence. I used to tell myself that I’m a global barber. I would tell people that I could go out there and cut anyone’s hair no matter where they are. Things started off in this very shop we’re in right now in about 2000. I started working here and was here for over 10 years, but the time came that I had to leave.

I was actually forced to leave by the manager at the time, who wasn’t too happy with the way myself and the HD brand was developing. When I was kicked from the shop, I started doing more private appointments. I started go to hotel rooms and houses to trim clients and the brand started to grow again. I went to another shop to work but because of my brand, I always had way too many people flooding through the doors and the manager there didn’t like it, so I was kicked out again!

I focussed on travelling again. I eventually met Nainggolan at the Euros, who was introduced to me via Moussa Dembele. I owe him a lot as he helped take the brand global. Going to the Euros with him aided the brand massively. For three years after that, I was flying to Roma frequently to cut Nainggolan’s hair. It’s really been from the bottom to the top. 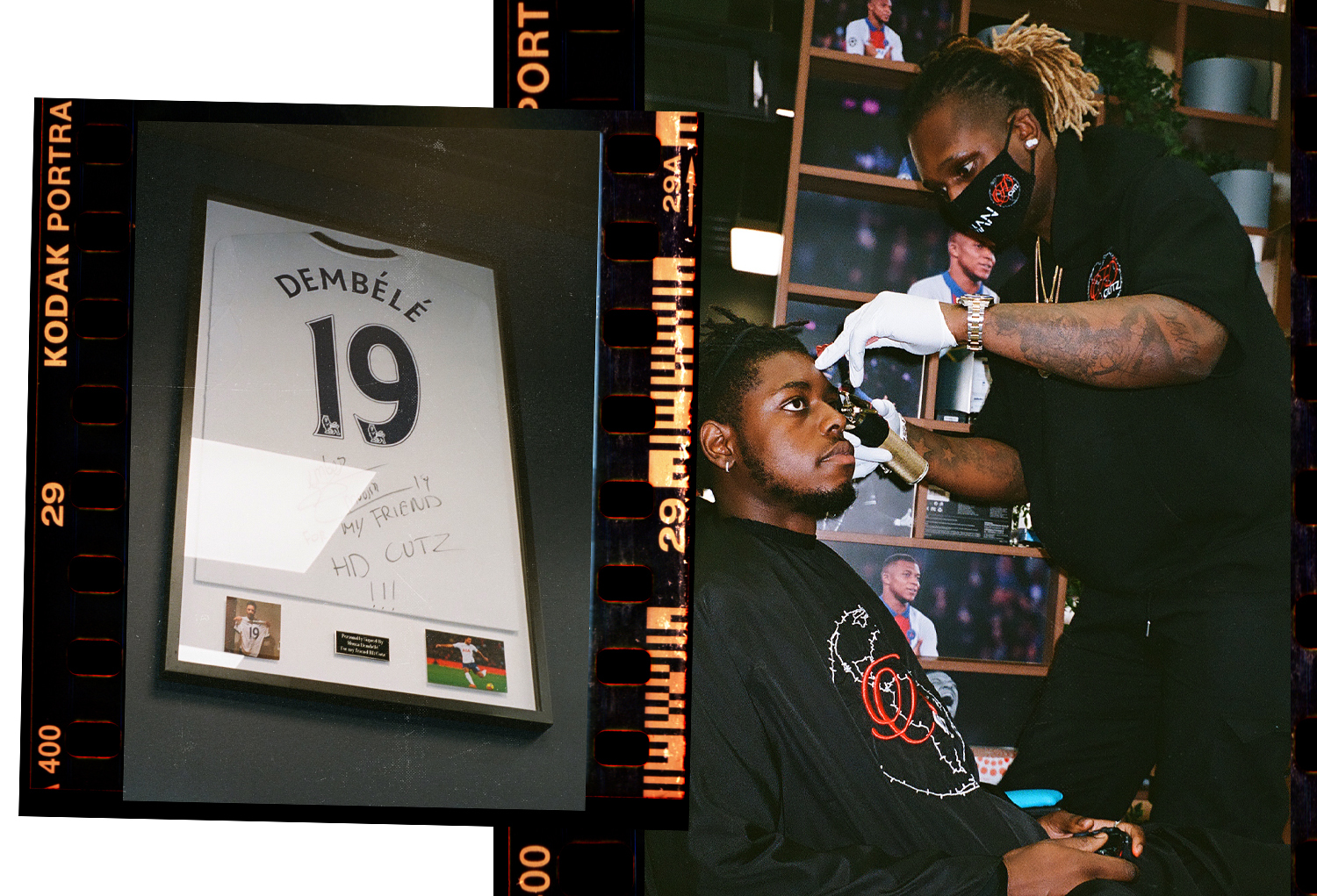 Run us through a quick list of some of your clients past and present.

In the UK we’ve got Rudiger, Barkley, Hudson-Odoi, Antonio, Sterling, Gabriel Jesus, Mahrez, Fernandinho, Bergwijn, Sessegnon. In Europe we have Sancho, Akanji, Embolo. If we go back to Manchester, there’s Wan-Bissaka who is a really good friend of mine. Truth is I could stay here for another two hours and keep listing. Someone showed me some Match Attax cards yesterday and it was only then that I realised I cut so many ballers.

Your client list is strong! Who’s your favourite right now?

I’ve got a lot so it would be wrong for me to say I have a favourite. I do have a great relationship with a lot of them, and Rudiger is a great example of that from when he was playing in Roma. Back when I used to go out for Nainggolan, I would cut them both on a Friday, and it was a social link up. Rudi would get in the chair last because we would sit there for hours talking about family. Michail, I’ve known for ages, so we have great banter. Sterling of course, coming from Jamaican backgrounds, we share a lot of jokes. I can’t leave out Leon Bailey. We linked up when he was in Belgium and now he’s in Germany. We usually cook, we eat, we laugh, we attend functions together. There’s a genuine relationship there.

Jet Setting has become a normal part of the job now for barbers. What’s your experience been like?

It’s become a very integral part of HD Cutz. I often have to travel into Europe and then back into the UK quite a bit. I do two to three flights a day sometimes. A typical day for me would start at 4am, 6am airport, 7.05am flight, arrive in Germany. Two or three cities in Germany and then fly back to Manchester. I’ll do a few jobs there before coming back to London, have some sleep and then it’s off to Italy in the morning! During the last World Cup, I was doing two or three flights a day in Russia because I was going up and down between players.

What’s been your favourite all-time trim?

I’m really enjoying Raheem Sterling at the moment because being a barber, I usually just cut hair. However, I took myself out of my comfort zone and did some different things with him. I gave him twists and it’s trending at the moment – from that, loads of people have been in touch to tell me they want to twist their hair and I’ve even had to do the same thing for his teammates.

What’s your relationship between you and all the other big baller barbers? Are you mates or is there friendly rivalry?

The relationship is good! It’s interesting to speak to the other barbers and see how they respect HD Cutz. We link up on occasions and at events. I think we all know that we have a responsibility to the young people growing up and because of that, we have to talk to each other and respect each other and that’s good for our trade. 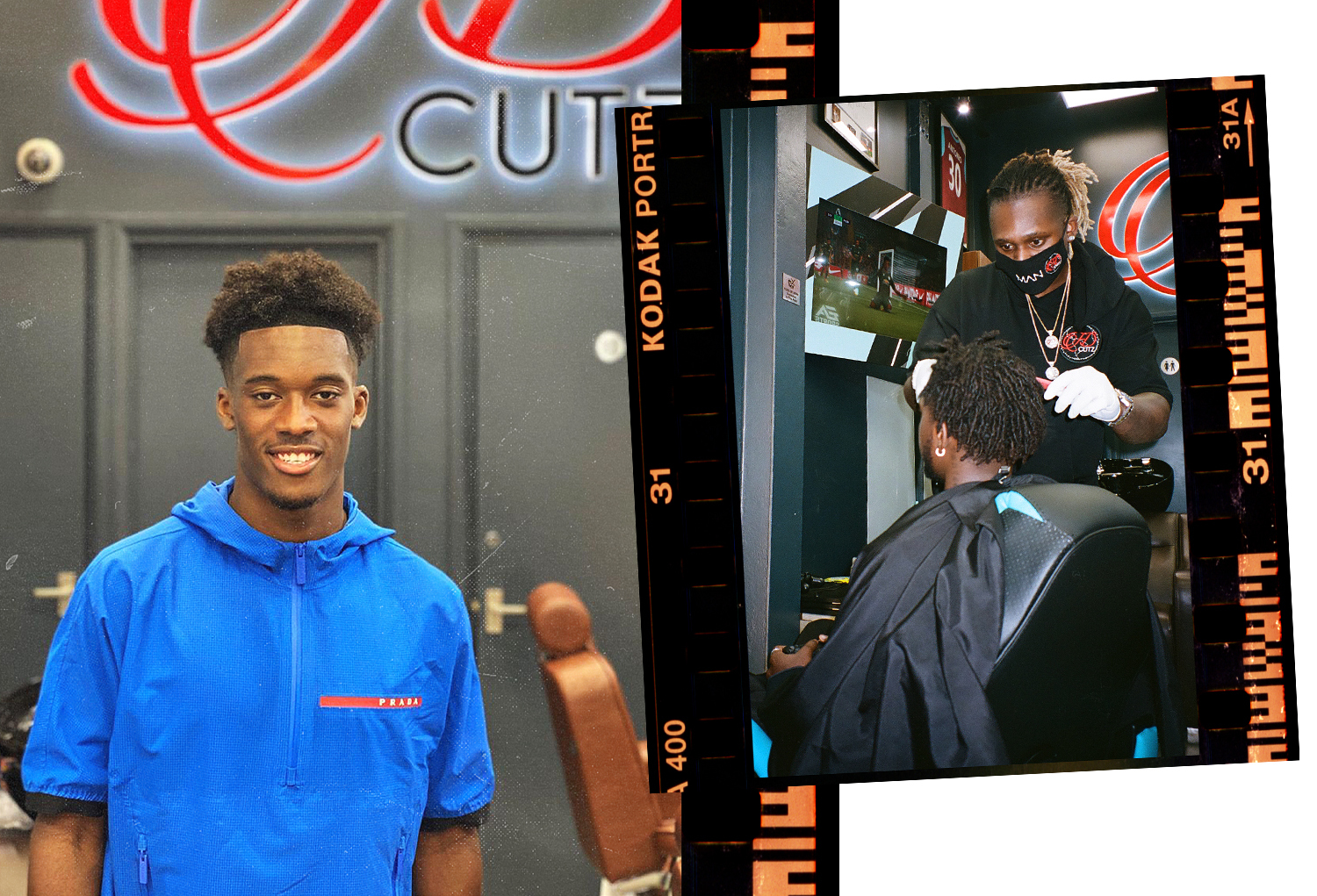 What does community mean to you? Is it important to be a ‘force for good’ with what you do?

A year ago, I went back to Jamaica to give loads of motivational talks in schools. Cutting Raheem Sterling and Usain Bolt’s hair made me very popular back home! When I saw people coming to me, amputees at that, and telling me that they want to be a barber and because of me, they attended a barbering course, it felt good. I feel as if I have a responsibility to motivate, inspire and uplift people all over the world. That’s where my work ethic comes from. I can’t just chill. I have the responsibility on my shoulders to inspire.

What’s your personal relationship with football and FIFA like?

I grew up in a poor family in Jamaica. Having FIFA or any game in my house was something we had to wish for. When I would go to homes of my friends who could afford it, playing meant so much to me. Going over to my friend’s became a way of life for me. But my relationship with football over the last few years has been emotional as a Manchester United fan! I used to sulk in a room when they would lose but as I started building a relationship with players, I was less emotional about one club. Many friends will say I’ve jumped ship but now I just support my clients.

If there was one baller you could trim who would it be and why?

Messi! For a few years, I bought every single Barcelona shirt because I’m a big fan of Messi. I always say a joke to my friends, if I cut Messi’s hair today, I’m going on flight mode for a week and no one will find me! I would be so gassed. Messi, if you’re watching, I’m coming for you!

What do you talk about when ballers are in the chair?

One thing about being a barber is that you have to learn to manage people’s situations. You try not to get too much into their business, whilst trying to uplift them about what they’re doing. You might tap them on their shoulder and say ‘well done’ or if they are in the middle of a horrible moment, you try and uplift them. You end up trying to be the player’s friend or family and uplift their mental state. We do talk about everything!

EA SPORTS FIFA 21 is out now on PlayStation 4, Xbox One and all other platforms. Head to EA now to buy the game.