Marcus Rashford is going back to where it first started. The Manchester United baller has made his impact and influence felt on a national scale over the past two years – with his food poverty and literacy campaigns unprecedentedly changing lives for millions of young people – but with his latest initiative, Rashford is giving something back to the school that made him.

Button Lane Primary School’s love for Rashford is evident everywhere you look. Hand-drawn portraits adorn the entrance gates, displays hang proudly in the corridors, and a new mural inspiring students to dream – with Marcus at its centre – brings colour and vibrancy to the playground on an otherwise grey autumn day.

And Button Lane’s love for Rashford goes both ways. Celebrating his 24th birthday and the start of a new multi-year partnership with Nike, MR10 is back on his old turf to unveil a brand new football pitch for the school – giving students a better chance than ever before to follow in his footsteps.

It feels like a full circle moment for an individual that’s inspired by community spirit. On the day that Wythenshawe’s favourite son came home, we spoke exclusively to ‘the people’s PM’ about his new partnership with Nike, why access to football is so important for young people, and how his vision for a better world was first sparked as a 10-year-old boy. 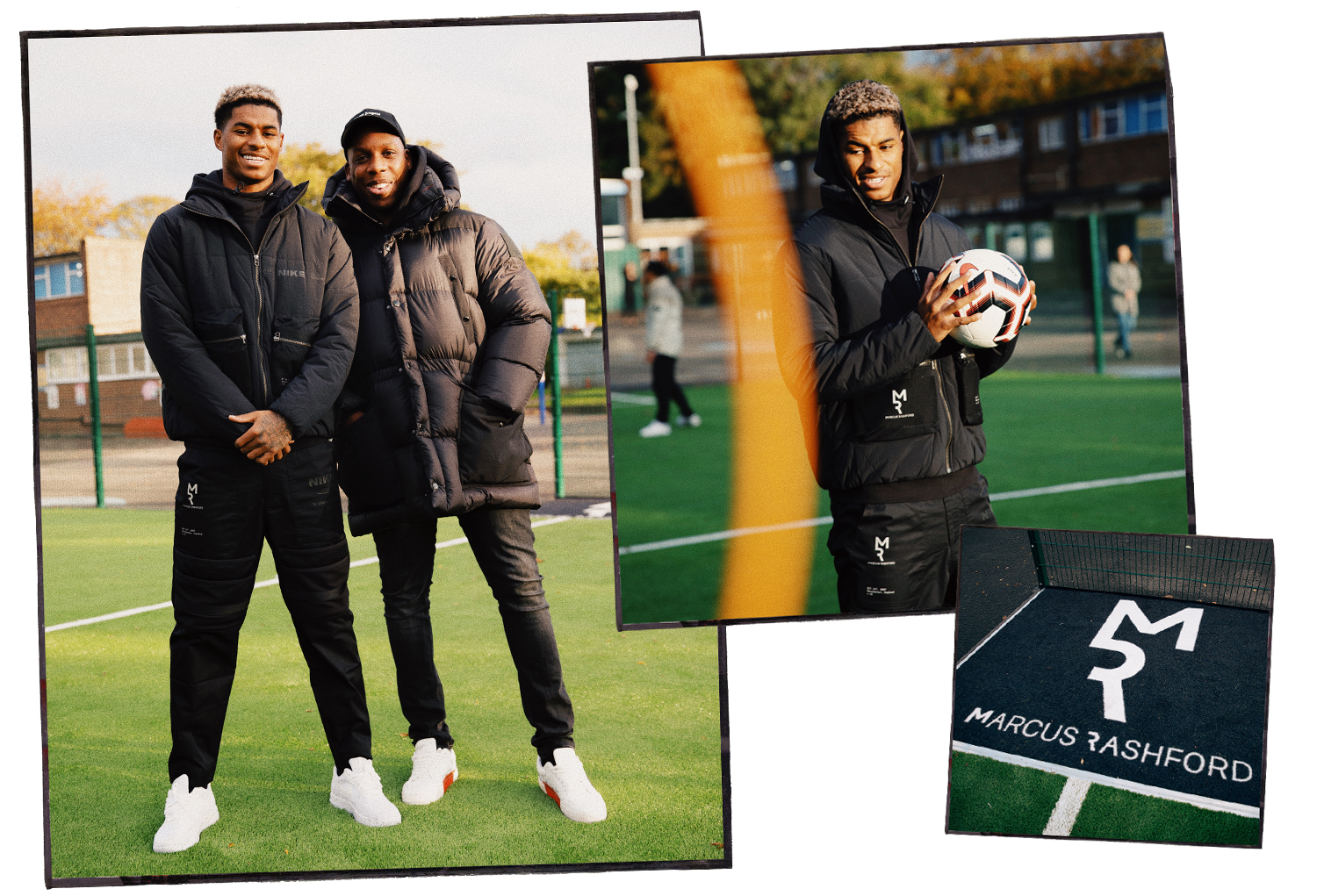 VERSUS: We’ve just seen you unveil a new football pitch here at your old primary school. How did the idea for this project on Button Lane come to existence?

Marcus Rashford: A lot of this was an idea I’ve always had and I’ve just been waiting for the right time to do it. We have so many different ideas and visions of what we want the future to look like, but you have to take your time and do it one step at a time. Today, it’s a great feeling to be able to give the kids this facility and hopefully it’s something they’ll always enjoy.

How important were football pitches like this to you as a kid, and what can they do for kids just like you in this part of the world?

For any kid who loves football, it means everything for you to have a nice facility to go and play on. You would never turn down the opportunity to go and play on a nice pitch. I remember when I was a kid I’d go and play football anywhere, on any surface, and there were a few places that had nice pitches – but you couldn’t always use them. Access was always a bit questionable, that’s been a problem for a while, so I wanted to create something that kids could use during school without any restrictions.

I think kids from this area that dream of becoming footballers or an athlete now have a person to use as a template. Growing up I was fortunate to be in United’s academy and that was the difference for me…I was able to be surrounded by other players that had done it, and I could watch them every single day. They give me an idea of what it took to get to the very top.

Before I went full-time, you’re just purely playing for the love of the game, but when you are in an academy you get to see up close people that were in your position and worked their way up. You follow in their footsteps and hopefully the kids at this school can now follow in mine. 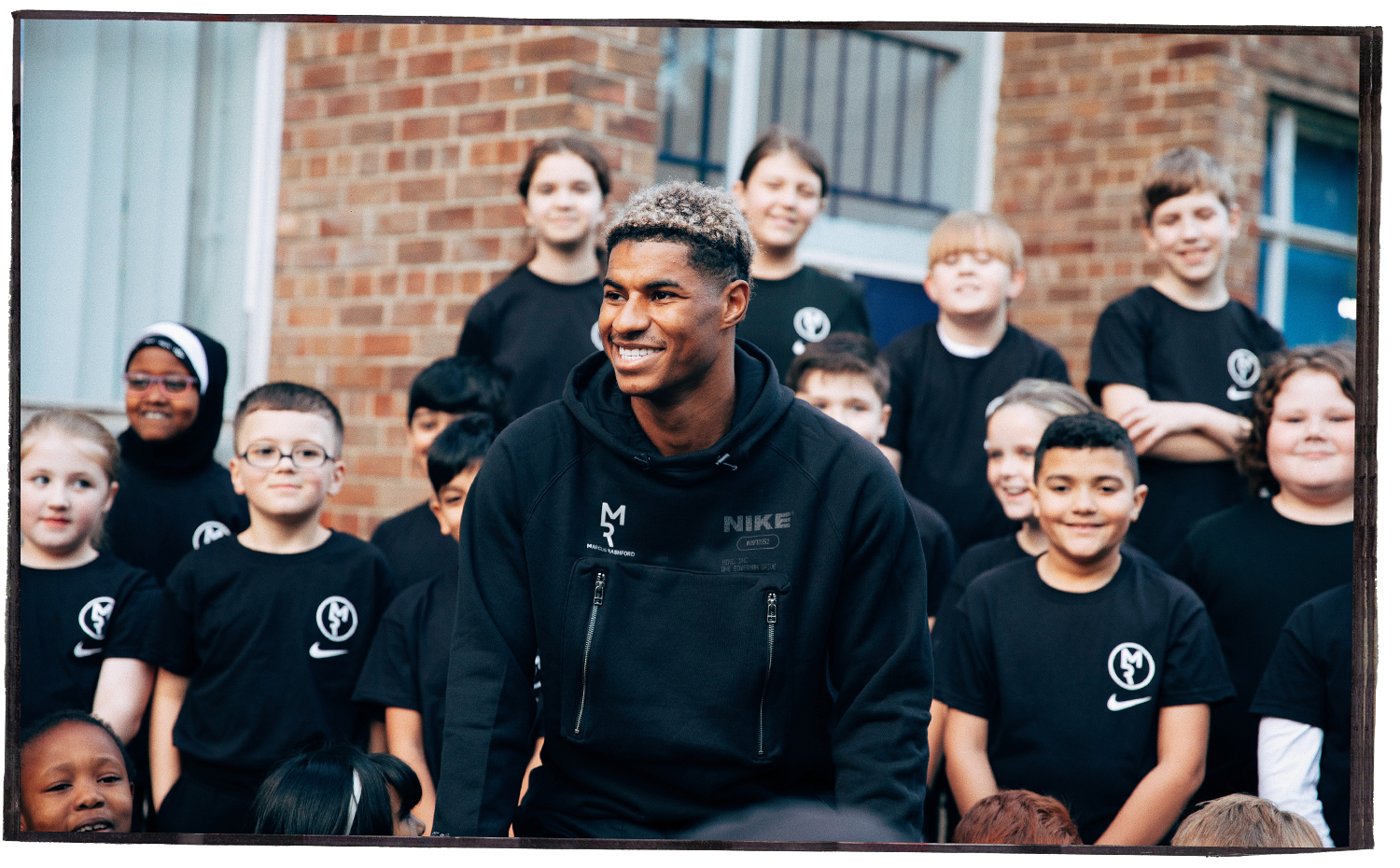 “I’ve always felt people in need deserve a helping hand to put themselves on a better path.”

What does this part of the world mean to you and what did growing up here teach you?

Growing up here I just learned that your freedom is priceless. As a kid I was always free to play and express myself, and do the things that I love to do – with football being the main outlet. Nobody ever held me back and of course there’s a few times in the community where you’re playing in places you shouldn’t be playing, and you get a little slap on the wrist, but you find a new spot and express yourself all over again! That’s one of the keys in everyone’s childhood.

And in terms of this school specifically, what does it mean to give back to this place?

I’ve always envisioned doing it, so today is just taking that next step. It’s definitely a special moment but I know there’s more to follow – that’s just the way I see things. You don’t just do one thing and hope that’ll last forever – you need to keep working and find new solutions because times always change, and generations always change.

You just mentioned how this is something that you’ve always envisioned. At what point did you realise you wanted to use your platform and reach to do important work like this?

I was really young when I was thinking about these things. When I was 9 or 10, I used to catch a bus from just down the road here on Button Lane into town, and then you had to walk 10 or 15 minutes for a different bus stop and get another bus to Salford to train at The Cliff. I used to pick up on little things when I was on that walk everyday – things like homelessness, you’d see people that clearly needed a little bit of help but aren’t receiving it. And in most cases you could tell they wouldn’t ask because of pride, they’d want to do it on their own. I’ve always felt people in need deserve a helping hand to put themselves on a better path, and that’s something I’ve tried to take with me through to today. 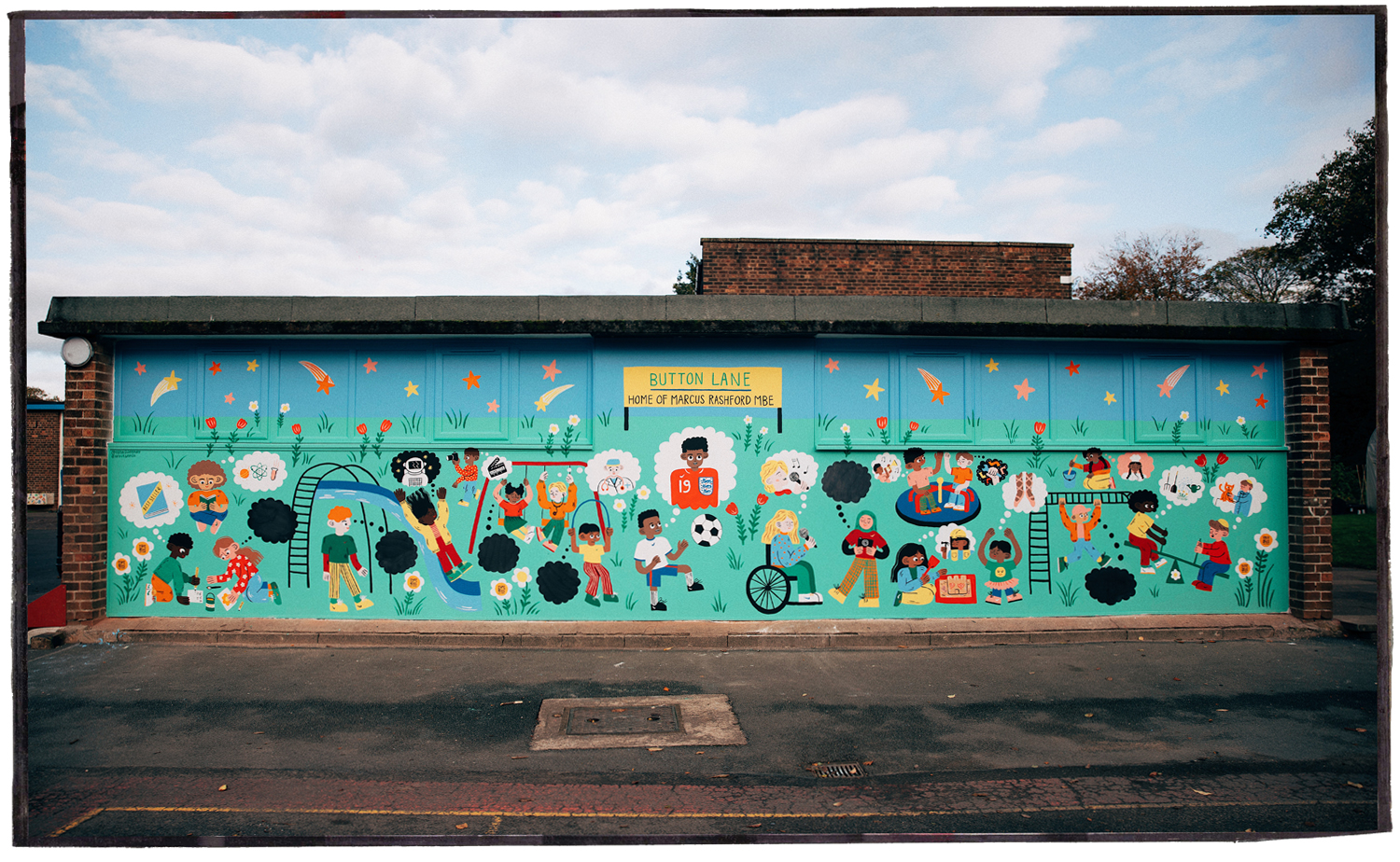 “You don’t just do one thing and hope that’ll last forever – you need to keep working and find new solutions because times always change.”

You’ve created this pitch in partnership with Nike, and it’s a moment that kicks off the start of a new multi-year partnership between you and the brand. What does it mean to pen a multi-year deal with Nike?

It’s definitely a great feeling. You know, Nike’s been a part of my life ever since I was 10 or 11-years-old so it’s always been fun to be with them – and even before I was with them I would always wear the Nike trainers and boots. It was the right thing to do for me and it’s all been very natural, I hope it continues.

You’ve been with the brand since young, so what’s been the key ingredient to such a long and successful relationship?

I think we understand each other. We’re always on the same page and hopefully that can continue and I’m sure it will.

There’s been so many individuals and teams in different sports that have left a legacy with Nike that will live on forever, and that’s always my goal – you want to be able to offer the next generation something. So yeah, hopefully together we can create moments that go down in history.

Is creating positive change with Nike a big motivating factor for the success of your partnership?

Yeah, definitely. I think the main focus is on football and doing well on the pitch, but if you can help others and make a difference to those who need it at the same time, I think it’s extremely important. 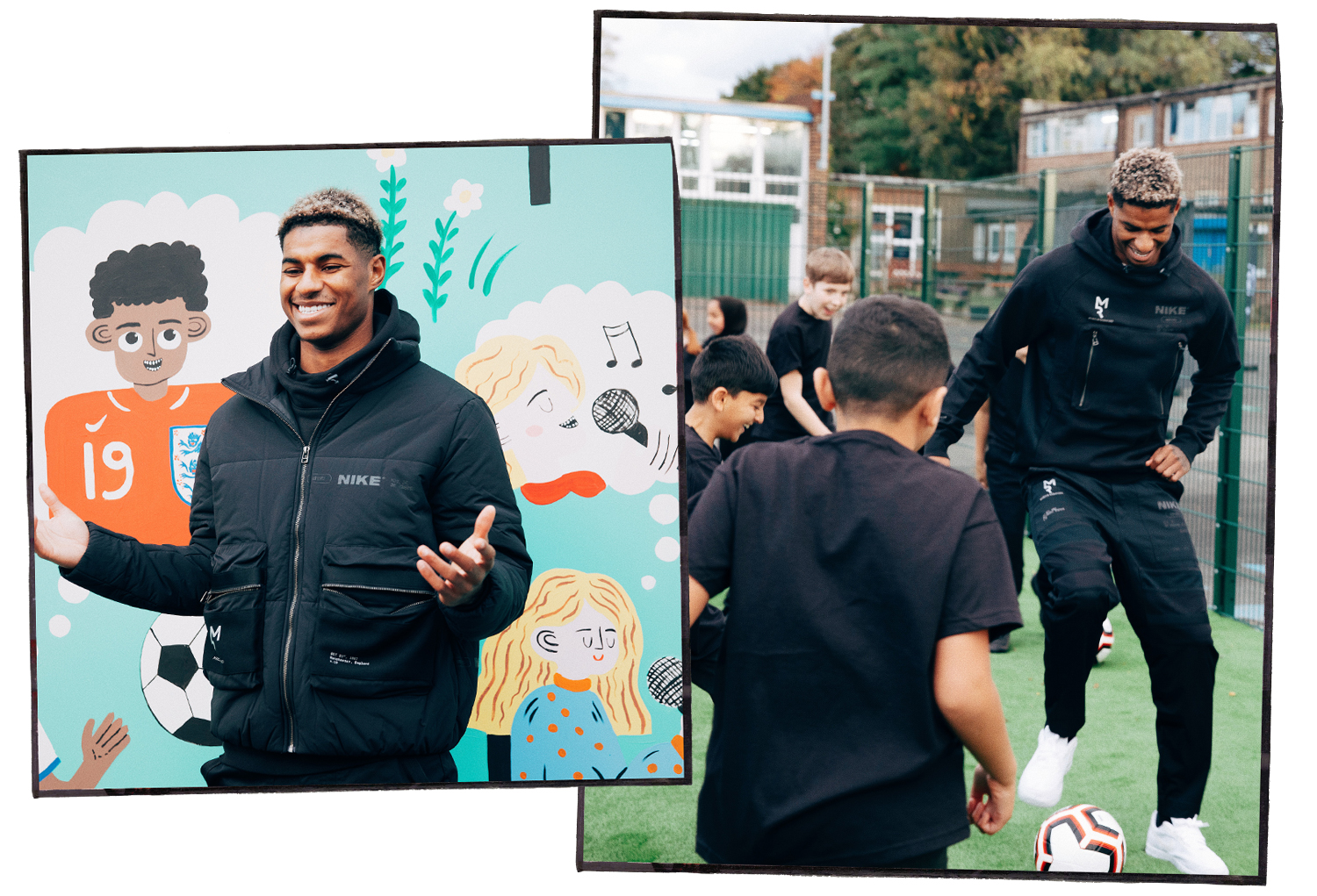 “I was told to never feel ashamed about expressing your own opinions…I carry that with me to this day.”

What has the reaction been like inside football to your off-pitch work? Have you had any kind words from fellow pros that you were particularly touched or surprised by?

I think everyone’s been very supportive. The good thing for me is I’ve had messages from players that ask me questions about how I got this started, because they want to do similar things in their area. That’s what it’s all about for me, because if everyone makes a little change everywhere it’ll make a big change in the world. That’s been the best outcome of all this so far.

You’re the leader of a generation of players using their voice for positive causes. Why do you think this generation is so motivated to use their platform for change?

For me, growing up, I was always told to express myself. I was told to never feel ashamed about expressing your own opinions, and that’s something that I’ve learned from playing on the streets here and going to United’s academy. It might be football, but every time I was told to “express yourself” or “try things”, it hit deeper. I’ve just carried that with me as a mantra to this day.

We often call you ‘The People’s Prime Minister’. How does that make you feel?

The Obama link up from earlier this year was insane to see. We’ve never seen a Premier League player given that kind of audience. What was that experience like?

That was definitely a highlight for me. He’s a very clever individual and for me, I like to take what I can from those conversations and think about how I can implement those lessons into my day-to-day life and visions. What was cool about it was that it was just so relaxed. It was a calm conversation and because of that you take more from it. 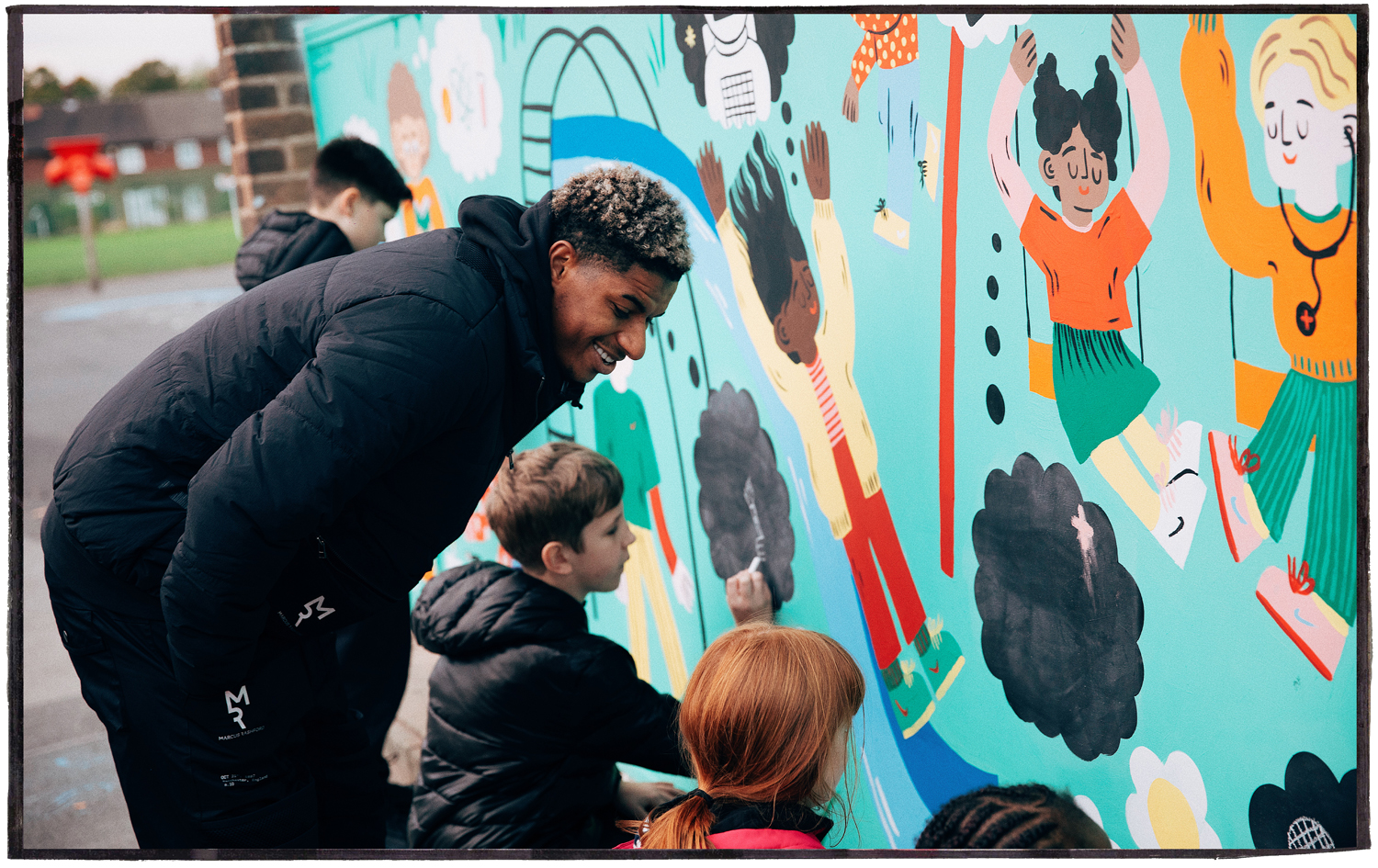 “I want kids to have beliefs and dreams, and not feel like anything is stopping them.”

We have to talk a bit about the mural over the summer, and how special people’s response to what happened was. How did it feel to see that sort of public outpouring? I think it’s one thing seeing it online, but in person it must be a whole other emotion…

It was a great moment and it shows the strength of communities. I know the mural was a big thing in Withington, but the support we received from communities around the country was every bit as big as that. That’s the real strength in all of this, we’re seeing communities coming together as one. The more we do it, the better our country will be.

Food poverty, reading and literacy, anti-racism, getting young people involved in sport. We’ve seen so much you want to do – are there any other issues you’d like to address in the near or distant future?

I think it never stops. I’ve already mentioned that each generation is different – the kids these days are different today to how I was, they’re a lot more confident. I see it a lot in this estate because my friends still live here, so if I’m going to see my friends they stop and ask me questions in the street and treat me like a normal person. That’s one thing I’ve always wanted and you don’t get it everywhere. It’s actually a bit of relief when I come here because I can just relax and be myself, and they can be themselves around me as well.

We’ve created an atmosphere that shows them I’m just a normal kid who grew up in the same place as you, in similar conditions, and they can see my vision. I think one of the kids I was talking to out there, she was drawing a microphone on the wall and she told me ‘I’m going to be a singer’, and for me that’s exactly the reason I started doing this stuff. I want kids to have beliefs and dreams, and not feel like anything is stopping them. I want to do everything I can to help young people achieve their dreams. 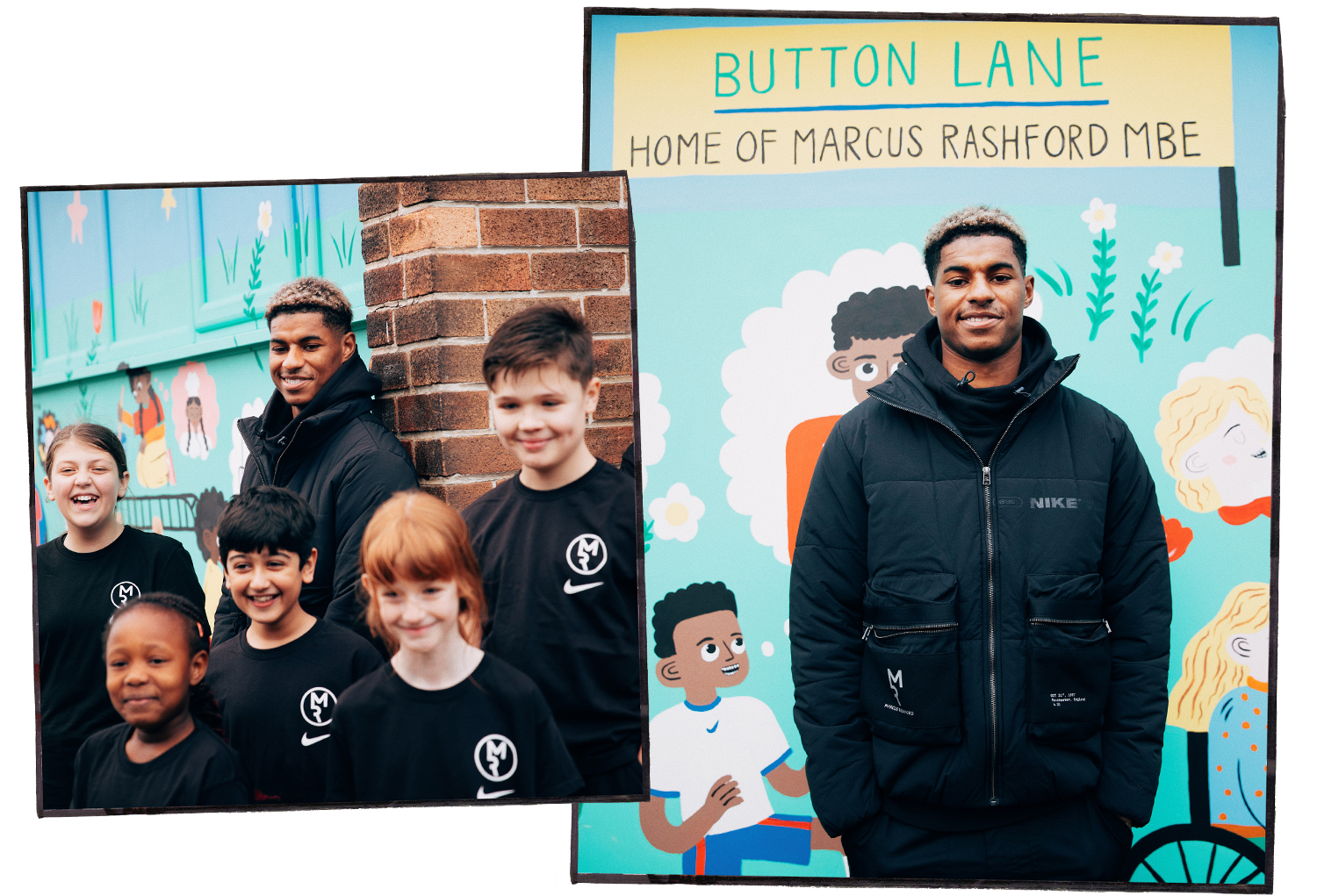 Photography by Elliot Simpson for VERSUS.