Pass the Torch is a new series from VERSUS that links up two of the most influential figures in football, past and present, to talk about their journeys. Together, the duo share stories about their lives on the pitch, reflect on the progress the sport has made, and officially ‘pass the torch’ onto the next generation of ballers.

Ledley King and Shelina Zadorsky are two defenders who’ve put their bodies on the line – quite literally – for Tottenham Hotspur over the years. Both captains have seen their sides experience the dizzying highs and lows of club football while proudly donning one of the game’s most famous white shirts. These Lilywhites are as pure as they come.

King made a staggering 323 appearances for Spurs between 1999-2012, bagging 14 goals and a League Cup along the way. ‘The Boy from Bow’ made his way up the youth ranks to become one of the most prolific centre-backs England has ever produced. The ‘One Club Wonder’ has gone down in N17 history as one of the club’s finest ever leaders. Taking up that mantle in 2022 is Olympic Champion Shelina Zadorksy, who’s led Spurs to one of their best seasons since being promoted to the Women’s Super League in 2019.

The honorary Londoner and two-time Olympic medalist is just six points off qualifying for Champions League football next season. The Maple Leaf will be hoping to taste the sweet victory of success on the European stage soon, but before then she has to lead from the back at Tottenham Hotspur Stadium for her side’s final games of the season.

VERSUS caught up with the two icons to wax lyrical about the club that’s given them so much over the years, the significance of London derbies and the future of women’s football in England.

Photography by Ellie Ramsden for VERSUS. 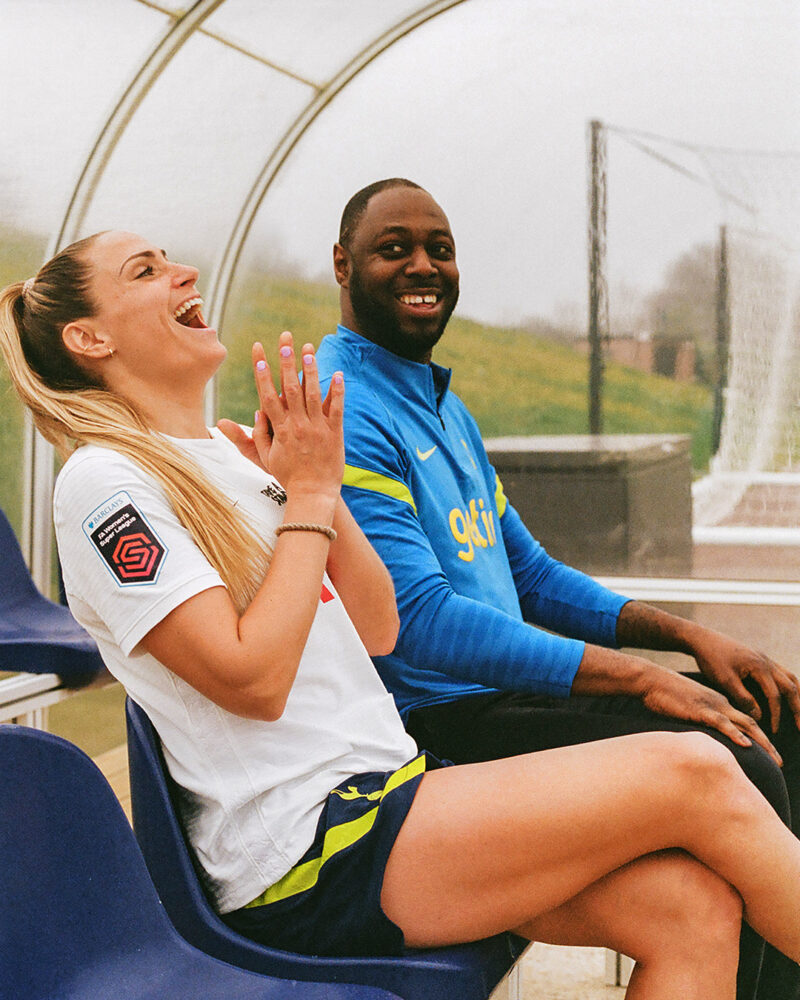 VERSUS: Ledley you spent your entire professional career at Tottenham Hotspur! A club that has arguably one of the biggest footballing rivalries in the game. In your opinion, how big is that rivalry between Spurs and Arsenal, and what’s it like to play in a derby game?

Ledley King: It means so much, especially to the fans. To me, as someone who joined the club at 14-years-old and came through the academy, I played in a lot of North London derbies over the years! So I got to really understand what it meant to the club and the fans.

Most people have family members who support either side – the same with friendship groups – and so everyone is vying for the bragging rights on game day! And you feel that as a player. You really feel the emotion that fixture can create, and that makes it one of the most exciting of the season.

Shelina, was that something you knew of before moving to London and playing for Spurs?

Shelina Zadorksy: Oh yeah! I’ve watched Premier League football my entire life – I’m a bit of a football nerd, and so watched pretty much any football game I could while growing up in Canada. I actually watched the highlights and scenes from the Spurs game against Arsenal at Tottenham Hotspur Stadium a few years ago. Seeing thousands of fans cheering on women’s football was incredible. Watching that made me really excited to join the club and be a part of that atmosphere.

“It’s important we lift each other up throughout our games because mistakes will happen, but it’s about how you respond to them that counts.” 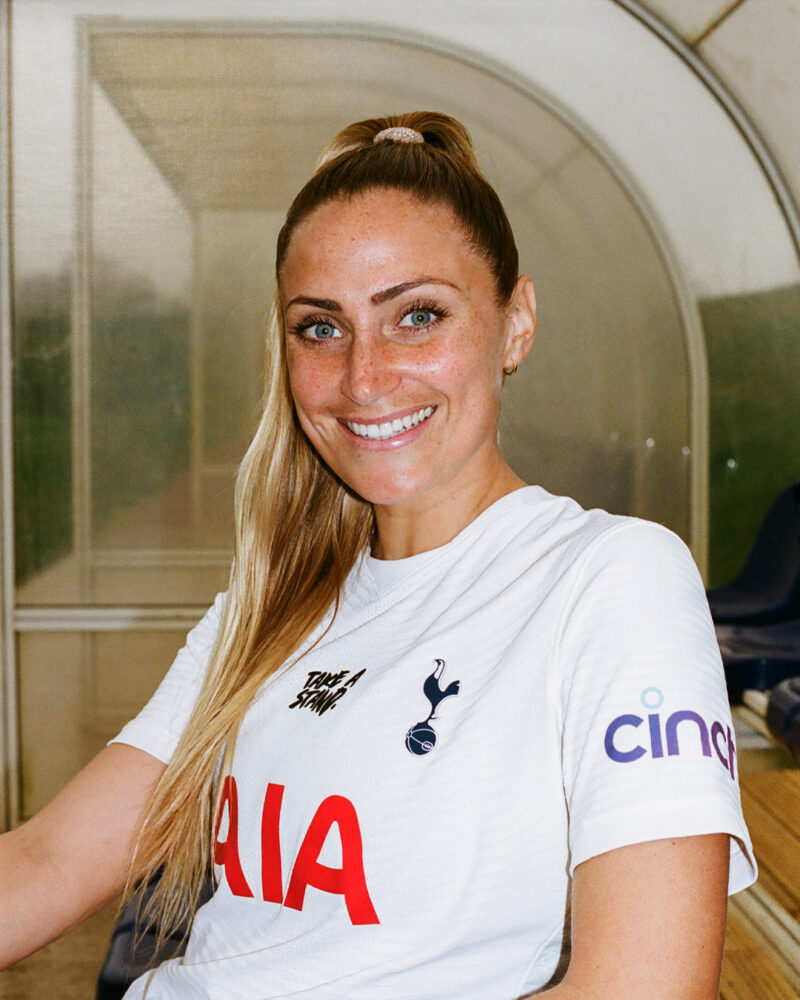 This season might potentially be the first time you get to experience playing Arsenal at the Emirates, are you looking forward to that opportunity?

SZ: It’s so exciting! Every time I get to play in a stadium that size and the history associated with it, it’s just so good for the women’s game. Playing at grounds like that attracts even more fans, and there’s a lot more of a buzz around the match before it’s even kicked off. It really helps to elevate women’s football in my opinion, and to play at an away stadium, it gets you really fired up! And we really relish that, even though many seem to think we’re the underdogs when it comes to playing Arsenal. But that is something we take on board and try to use to our advantage.

Ledley you’ve played at the Emirates before, what’s it like?

LK: It’s difficult, especially during my time anyway. When I played there, it was a brand new stadium – I played a lot of games at Highbury and when they moved to The Emirates it felt huge. Even for players who played in a lot of big stadiums before, it still felt pretty daunting. But you have to remember, it’s a football pitch. It’s 11 vs 11. It’s a game of football and as a professional footballer you’ve played in so many like it in your career. You’ve got to try your best to block out that ‘noise’ when you’re playing away from home, and try to concentrate on your own game. It’s a great stadium with great facilities, I’m sure Shelina and the team will relish the opportunity to play there and try their best to get one over on the ‘enemy’!

“You really feel the emotion in a North London Derby, and that makes it one of the most exciting games of the season.” 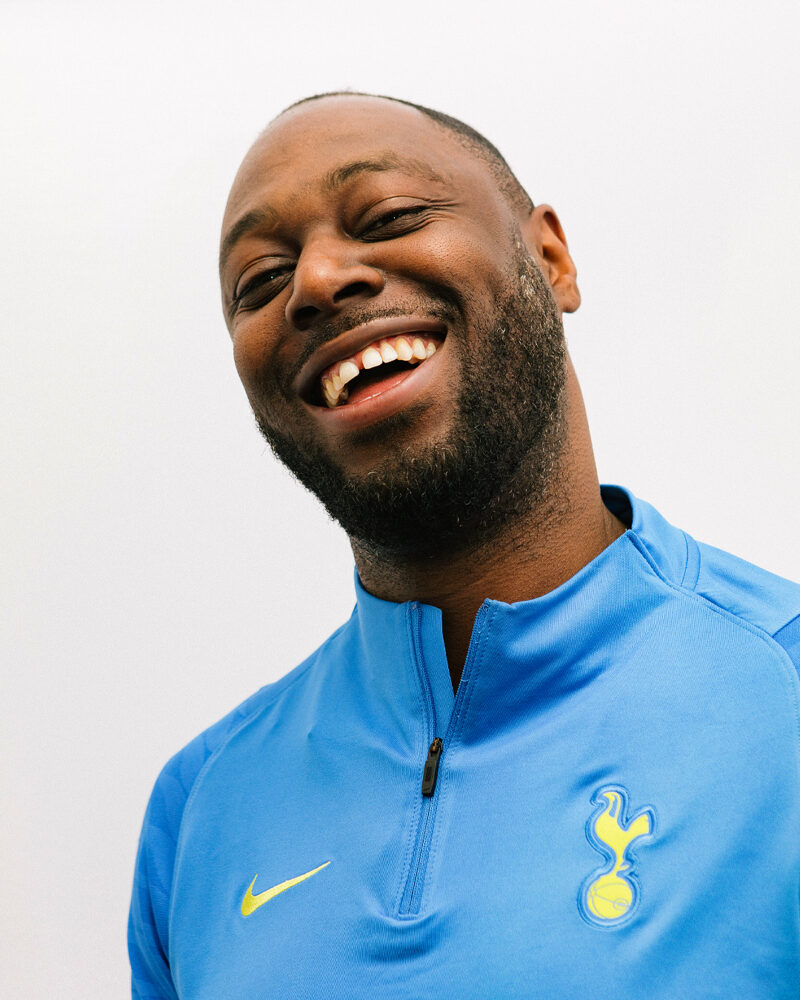 How do you try to drown out that noise you’ve just mentioned?

LK: You use it when you want to use it. Sometimes you might need to calm the game down for example, so it’s important to try and use the atmosphere when you need to, as opposed to letting it influence your game.

The ‘noise’ will always be there, so it’s about learning how to use it to your advantage. That’s why the most consistent players are able to play at home or away. It’s their ability to focus on the job at hand and use the crowd accordingly. My advice would be to use that energy against the opposition when you can. Home crowds can get frustrated when their team isn’t performing well, so try and use it…

SZ: Yeah, try and silence them when given half the opportunity.

Does a lot of that echo with you Shelina?

SZ: 100%! At this stage in my career, I’ve played at a lot of stadiums all over the world, and in front of some diehard fans and I love it! But it does take a certain level of mental toughness to perform well in those environments.

We all make mistakes out there, but against a massive crowd you can really feel it. Yet that’s where the togetherness of your team shines through and you find those moments to really communicate and connect with one another as a unit. That’s really important.

Lift each other up throughout the game because mistakes will happen, but it’s about how you respond to them that counts. And this year our team has responded well to setbacks on and off the field. We got that tie at The Hive against Arsenal earlier this season, and we can build on that and hopefully close down the gap a little bit.

“If we do play at the Emirates in a North London Derby…It’s a chance to show fans how exciting and competitive women’s football is.” 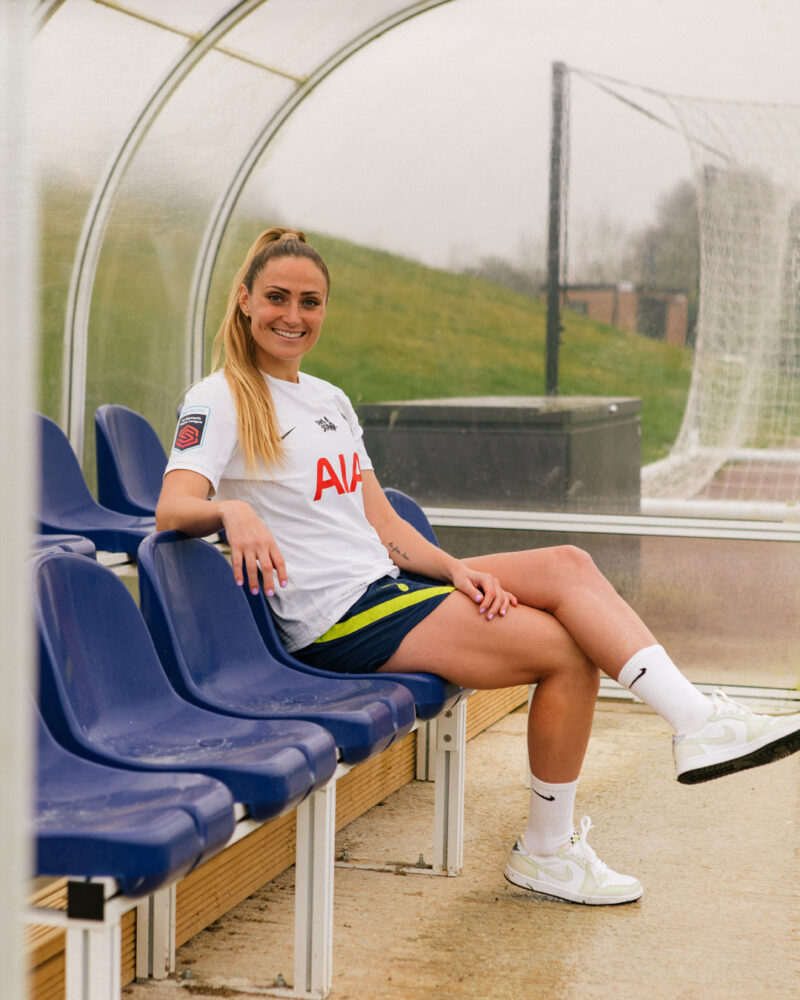 Spurs have upped their game massively these past few seasons, and a lot of that is because the team is so together. Rheanne Skinner has come into the squad and done a phenomenal job as manager too. You’re so close to getting that Champions League position, and the chance to potentially nick some points off Arsenal at some point to prevent them from winning the league. How much does that fuel you as a player?

SZ: Yeah, it really does!

I can see Ledley smiling!

LK: Oh definitely, that sounds good to me!

We know we don’t have a lot of games left, and so it’s about trying to make the most of every moment on the pitch. For us, every game then feels a bit like a cup final because so much is on the line but we’ve been really positive and smart about how we approach the season. We haven’t gotten ahead of ourselves, we haven’t told ourselves we have to make ‘Top Four’ for example. Of course the goal is always to finish as high as possible in the league, but I think if you take each game as it comes and put out performances every game you can be proud of, then success will come. We’ve also been really good at just trying to stay in the moment, and not getting too high with the highs or dwelling on the losses. We’ll be focused and ready when the time comes to play Arsenal, and it’ll be an absolute battle.

I spoke with Tony Adams and Leah Williamson about the rivalry between the two North London clubs, and when I asked Tony what piece of advice he had for Leah, he said: “just kick them off the pitch! Go into thinking you’re better than them!”

LK: I heard! You need to tell Tony the times have moved on since then! I’m only joking, I know exactly what he means…

Do you think it’s important to go into every game against Arsenal thinking they aren’t going to get one over on you?

LK: Definitely. Especially at the start of the game. You need to set your marker down early, show them you’re there to battle and compete. That’s especially important in a derby game.

At the same time, you need to make sure you don’t not lose your head. I’ve seen a lot of players get sent off in a derby game, and that never helps the team. You want to bring the energy to the game, and I’m sure as captain Shelina will make sure everyone is up for the game but they keep in line…

LK: That’s the phrase I’m looking for! And it’s really important they do manage to keep a hold on that, because things can boil over easily.

“Ultimately, if you’re a football fan, you’ll love watching us regardless. We play the same game, gender doesn’t come into it.” 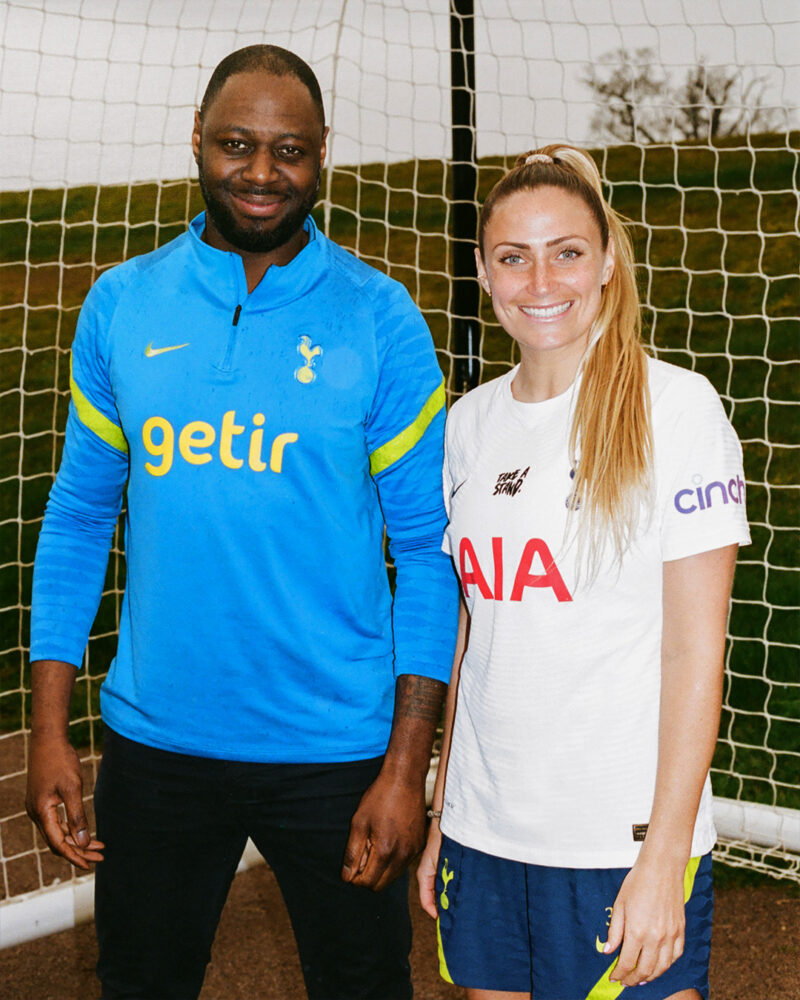 What was your fondest memory of a NLD Ledley? You probably didn’t have many eh! Of course I’m only joking! I am a Gunner by the way…

LK: There was a 5-1 once when we beat Arsenal, that was alright! That was a semi-final game too, but I think the first time I beat Arsenal is my fondest memory, because it took me such a long time to get that win. That was a really emotional game, and once we got over that line it gave us the belief that we could beat this team.

When the time comes, it’ll be such a showcase if you get the chance to play at the Emirates this season! How important is it that both women’s teams can now be a part of this historic footballing rivalry?

SZ: It’s massive! In my career, seeing how far the women’s game has developed over the years – and even recently how quickly things have progressed – this is just another step in the right direction. I am quite a stubborn person, and so I always want more for the game. Especially for players coming up the ranks, but the growth has been huge and I can’t wait to be a part of this historic fixture.

And if we do play at the Emirates in a North London Derby, I think that’s a massive opportunity to get such a huge, dedicated fanbase involved. It’s a chance to show fans how exciting and competitive women’s football is. Ultimately, if you’re a football fan, you’ll love watching us regardless. We play the same game, gender doesn’t come into it.