Ahead of this weekend’s first ever WSL North London Derby at The Emirates, VERSUS sat down with Arsenal legends Tony Adams and Leah Williamson to talk about one of football’s most historic fixtures, and how old rivals can help to create a new era in the women’s game.

Football fans live for a 'Derby Day', and there aren't many out there who know the power of one like the Gunners.

Ask any Arsenal supporter what fixture they look forward to the most in a season and they'll say: The North London Derby. The game comes packed with bags of history and classic footballing moments. From Gazza's ludicrous free-kick in the 1991 FA Cup semi-final to Titi's iconic knee slide celebration in 2002. This is one of the sport's biggest games, and fans of English football live for it. But it's about time the Women's Super League experienced the same level of excitement and adoration when it comes to all things NLD. And what better way to start this new legacy than by current WSL leaders Arsenal taking on Spurs at The Emirates this Saturday.

VERSUS caught up with the two icons to wax lyrical about the club that's given them so much over the years, and what The NLD means to them and the future of women's football in England.

Photography by Sulay Kelly for VERSUS. 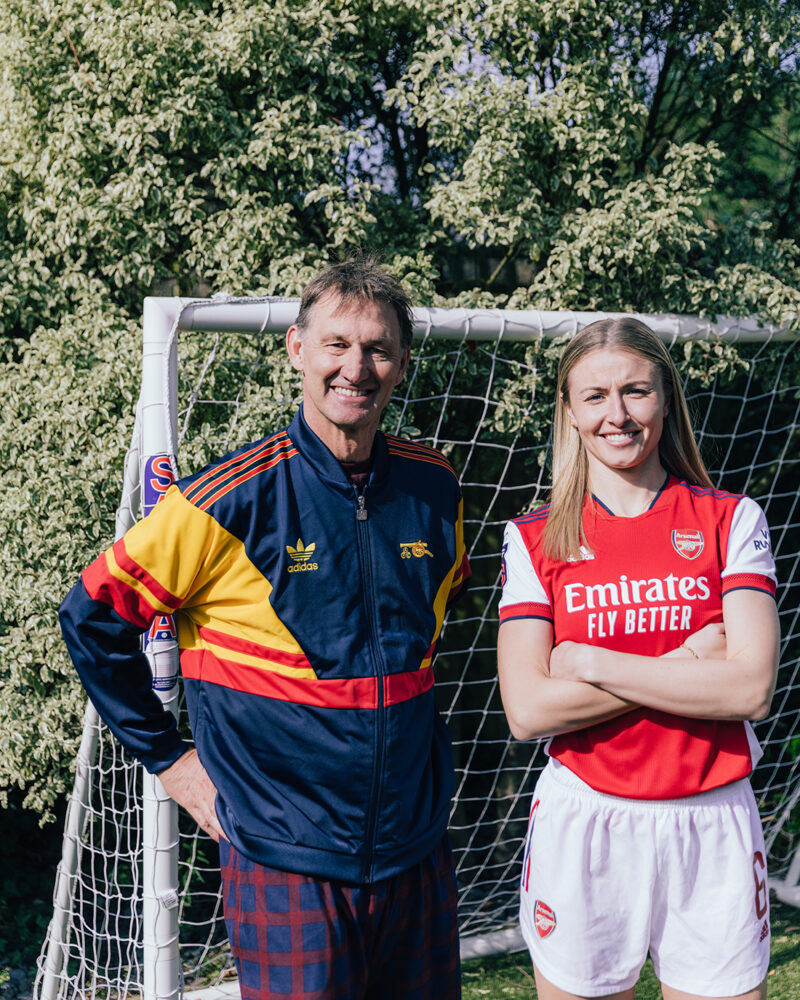 VERSUS: For your entire playing careers, you’ve both played for Arsenal. The NLD is such an important part of footballing history, and Tony you’ve experienced a few more derbies than Leah! What was your first experience of that fixture?

Tony Adams: My first experience of The NLD I actually spent studying Paul Mariner in order to become the best centre-back I possibly could be.

Don Howe at the time was our interim manager, and he told me I’d be watching the game from the Director’s Box as the 13th man. I was 18-years-old then, and I was fuming! But by the end of the game I understood why he had me do that, and I’m glad he did because Mariner was brilliant!

He rolled up his sleeves before kick-off, got the fans riled up, headed everything and screamed for every ball. We won that game 1-0 and I remember afterwards going to the changing rooms, looking at the coach and just nodding at him because I then understood why he got me to watch this unbelievable player. I learnt a lot about how to play in a NLD from Mariner. An England CF taught me more about playing as a centre-half defender than any other player I’d ever encountered before…the following year I took everything I learned from him into The NLD, and it fuelled my character on the pitch massively.

The more the opposition booed me, the more I tried my best. My personality at that point was one where I couldn’t really take compliments! So it suited me really well, because it just spurred me on.

And what was your fondest memory from The NLD?

TA: I think the ones in 1987 – we had two that year for the League Cup. We lost our first-leg at Highbury 1-0, but beat Spurs in our second-leg to go through to the Cup Final where we eventually defeated Liverpool.

It was really important to the new coach George Graham that we win a trophy that season. We’d always been winners at Youth and Reserve Team levels, so that win felt like a natural progression for us. To be honest with you, that trophy felt like a stepping stone towards us winning the League in 1989.

At the time, we hadn’t won the league for 18 years and Spurs had some amazing players – people like Glenn Hoddle, who were really technical. But we were more physical than them and just seemed to want it more! We were really organised through Graham and defensively we were far superior! You know, the following years in the early 90s were a time of real dominance for us. The team of 1991, they were just as good as The Invincibles in my opinion.

“The more the opposition booed me, the more I tried my best. My personality at that point was one where I couldn’t really take compliments, so it suited me really well!” 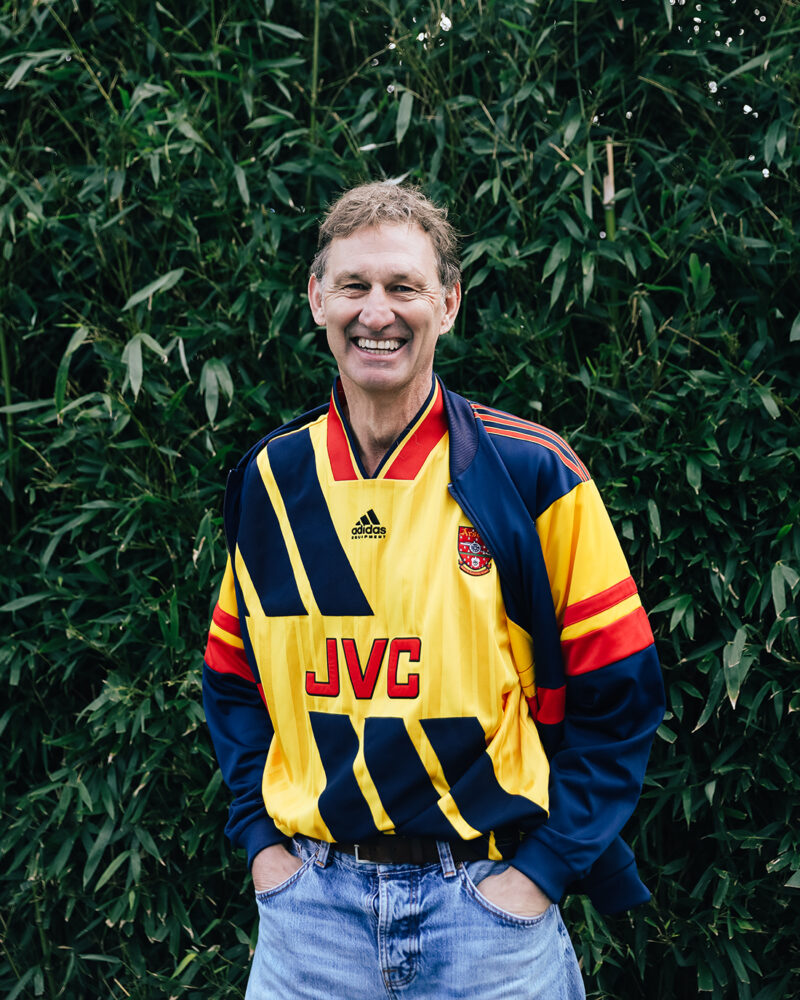 Playing in front of big crowds for epic fixtures like this one must have felt amazing! This will be the first time a women’s North London Derby will be played at The Emirates, how are you feeling about it Leah?

Leah Williamson: I’m just really excited! I think the game against Spurs the first time round was one of the best games of my career so far because of the crowd. Especially in the sense that it made me feel like a ‘real’ footballer. One of those ‘pinch yourself’ moments! So I am buzzing, and hopefully we can replicate that in terms of the atmosphere and getting people through the gates at The Emirates.

During that game at Tottenham Hotspur Stadium, there was a moment when you ran over to the home crowd and you flung your arms up into the air – I can only imagine what you screamed at the supporters! But the energy from that picture is palpable, and that’s the energy you envisage when you think of The NLD. Would you agree?

LW: I do! For the first time really, that game felt competitive and that definitely added to the atmosphere.

When I think about the first time we ever played Spurs, they weren’t in our league and the game ended up finishing something like 10-0 to Arsenal. And I don’t mean this at all in a patronising way! But the fact that Spurs are now in the WSL, and they’re a much more competitive side – and credit where it’s due because that journey hasn’t been easy! The game this Saturday isn’t a ‘given’. You don’t know who is going to win, and I think those closely contested games are the best thing for showcasing what women’s football is all about.

“If you had told me when I was a kid, this would be my Saturday afternoon one day, I would have bitten your hand off.” 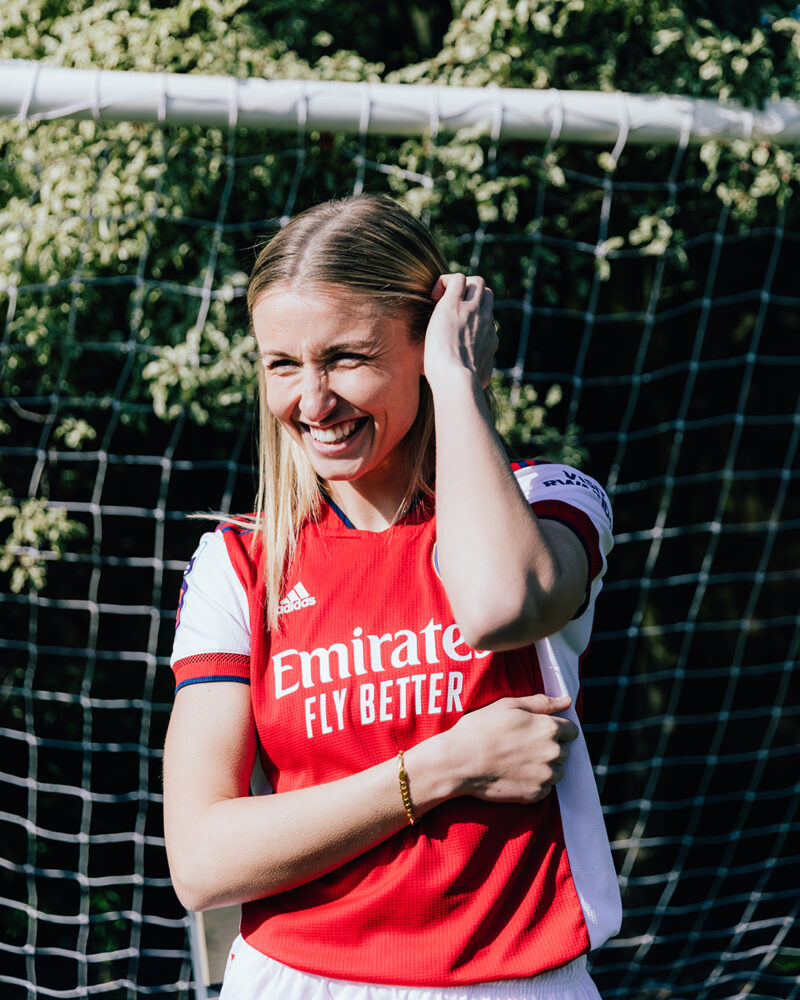 You just hope that this game is the start of a new tradition for both sides. The tagline this past month or so leading up to the fixture has been: ‘old rivals, new era.’ It must feel great as a Gunner and a player, to be a part of this new legacy.

If you had told me when I was a kid, this would be my Saturday afternoon one day, I would have bitten your hand off! This is what I’ve only ever dreamed of doing, playing in these types of fixtures. This is always my point about being an Arsenal fan, and playing for my club: as a fan, how much would you want this experience? I actually have the opportunity to play in this game! I’m seriously living the fairytale.

Tony, what would your advice be for Leah and the rest of the team ahead of the game this weekend?

TA: Just kick them off the pitch! Job done. I’m only joking!

LW: Quality! I like that. Hearing that has really put a smile on my face.

TA: I think in those situations you can get a bit carried away with your emotions. For us, Spurs were never our rivals when it came to winning the league. But as a standalone fixture, it’s an important one, especially for the fans. Sometimes when you get those big high profile games, you tend to try ‘too hard’. You need to make sure you look after your own game and do your job properly. Don’t get lost in the occasion and try to do too much. Go into it thinking you’re better than them though!

Will you be taking Tony up on his advice Leah?

It’s hard because my ‘personal game’ is all ball-play, but I know I’ve definitely got that attitude in me. And the fact that Tony’s said that, maybe I should put ‘it’ out there a little bit more to remind people that I’m not just a ball-playing centre-half, do you know what I mean?

I don’t really go into games thinking: “I’m going to play like this or that”, I sort of just take them as they are and play the very best football I can. But ultimately, you can’t ignore a piece of advice from Tony Adams can you? Don’t get me wrong! I’ve got it in my locker when necessary, but I’m not a “this is who I am” type player when it comes to making crunching tackles. Maybe I’ll announce myself a little earlier in the game with a big challenge in honour of Tony.

“Don’t get lost in the occasion and try to do too much. Go into it thinking you’re better than them though!” 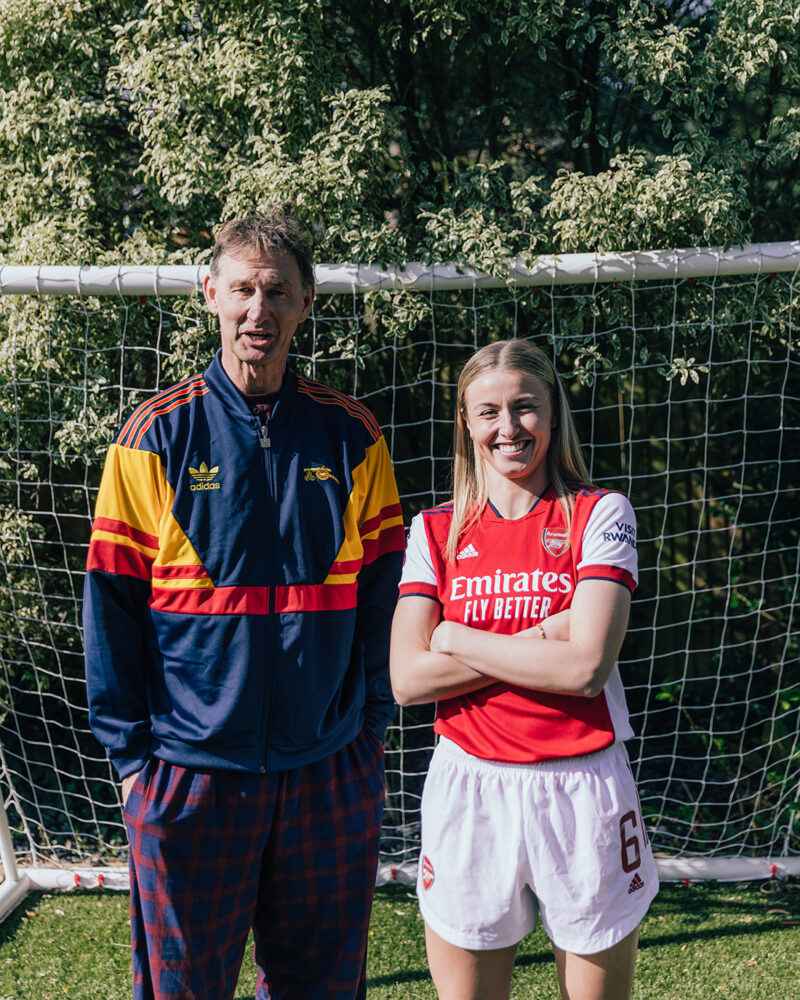 Just please don’t get sent off…

Oh there’s no fear of that happening, don’t worry! If it does, on Tony’s head be it.

At the moment, it must be quite nice to be an Arsenal player. Players are fit and healthy, team morale is at an all-time high, you’re playing some of the best football fans have witnessed in a long time. Do you feel quite content at the club?

I think for me, I will always be proud to play for Arsenal. And I think the reason I renewed my contract earlier this year was because it just ‘feels’ right. I know I’m where I am supposed to be. When I look at my life everyday, I’m happy. I’m surrounded by my team who seem equally at ease with where they are on and off the pitch.

A sign of being in a good team – and being in a good place with your team in particular – is when things might not be going so well. Everyone wants to stick around to fight through the tough times. You want to stick together in the hope that you can get through it as a unit. And I think that’s what has happened with the changes we’ve made to the team this season.

Playing with people who want to make things better is amazing. That’s what inspires me when I turn up to training everyday, I feel like I have a purpose. And I think the fans are seeing that now on the pitch. Winning is good, but it is a byproduct of all the other bits that you do. Those bits are the things fans might not see.

It feels good at the minute to be an Arsenal player, that’s for sure.

“I hope it brings in the crowd that we expect from it. I think it can lead the way for women’s football.” 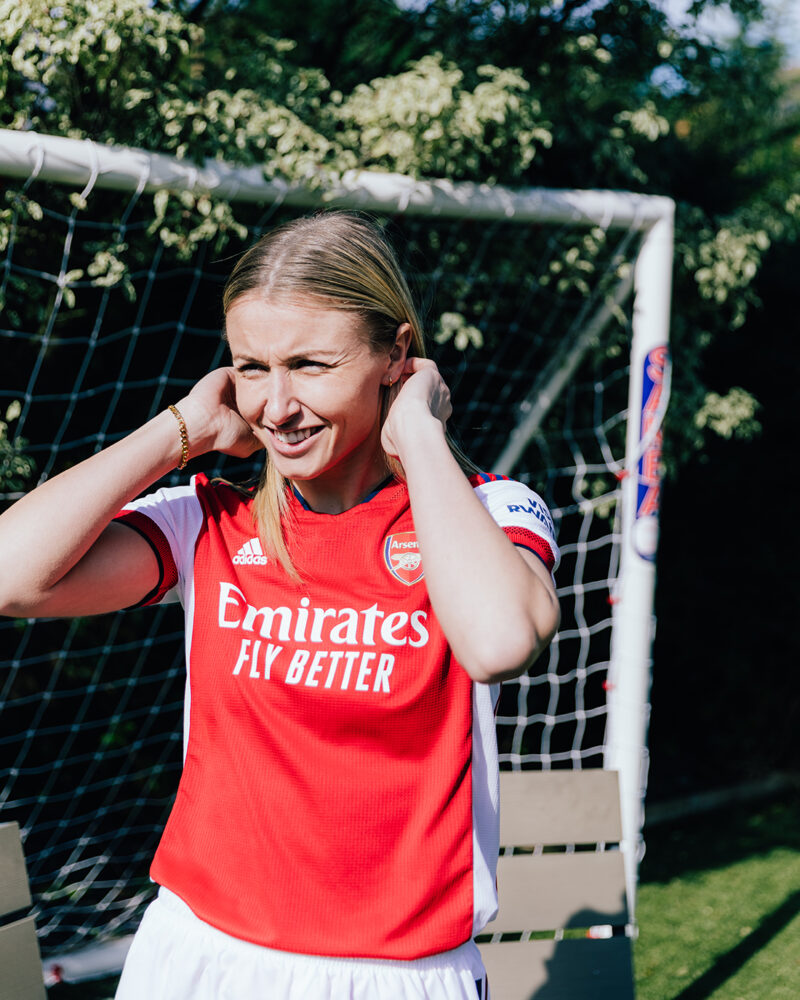 What are your hopes for the derby? What do you hope this fixture can become?

I hope it brings in the crowd that we expect from it. I think it can lead the way for women’s football, a bit like what the Manchester derby can do as well. I think there is a real opportunity here to showcase the game for what it is, and sort of take us where we want to go – games with a segregated home and away section for example. You know, just making it a ‘real’ atmosphere where fans can come to and it feels familiar to them. That’s my hope for the future of it.

From a football perspective, I hope that Spurs’ level keeps rising and so does ours! And this game lives up to its name on paper.

Purchase tickets for this Saturday’s North London Derby at The Emirates here.