Leah Williamson lives and breathes football. The lifelong Arsenal fan and player has been kicking a ball since the age of six. It was at that very age she decided football was what she wanted to do with her life. She might have spent her youth playing Sunday League football with boys before joining the Gunners, but Williamson’s now a part of a generation who’ve shown young girls up and down the country that a career as a professional footballer is waiting for them. If they want it enough.

Despite being just 25-years-old, Williamson has almost seen it all in the world of football. From lifting back-to-back FA Cups and being crowned WSL Champion with her childhood club, to captaining England at what is set to be the biggest Women’s European Championships in history. LW14 is living proof that age is nothing but a number.

The former PFA Women’s Young Player of the Year has grown up to be the 'poster girl' of the women's game. From her hometown in Milton Keynes to Newcastle’s Tyne, everyone recognises Williamson's face. It’s one that’s literally been plastered on billboards in the run up to next month’s Euros. Something she didn’t envision when younger. “If anyone said that they saw the rise of women’s football coming, they’re lying” she openly admits in 'Icons Unlocked'. Some people would buckle under the pressure to represent the world’s fastest growing sport, but Williamson embraces it. And does so because she wants to shape the game that’s moulded her into the leader she is.

We sat down with the country’s stargirl - who's working with Pepsi MAX and England teammates Millie Bright and Nikita Parris to spotlight the growth of the women's game - to talk about those who’ve inspired her on her way to greatness, what it means to her to be labelled a ‘role model’, and why it’s so important for the world to know footballers are more than athletes, they’re people. 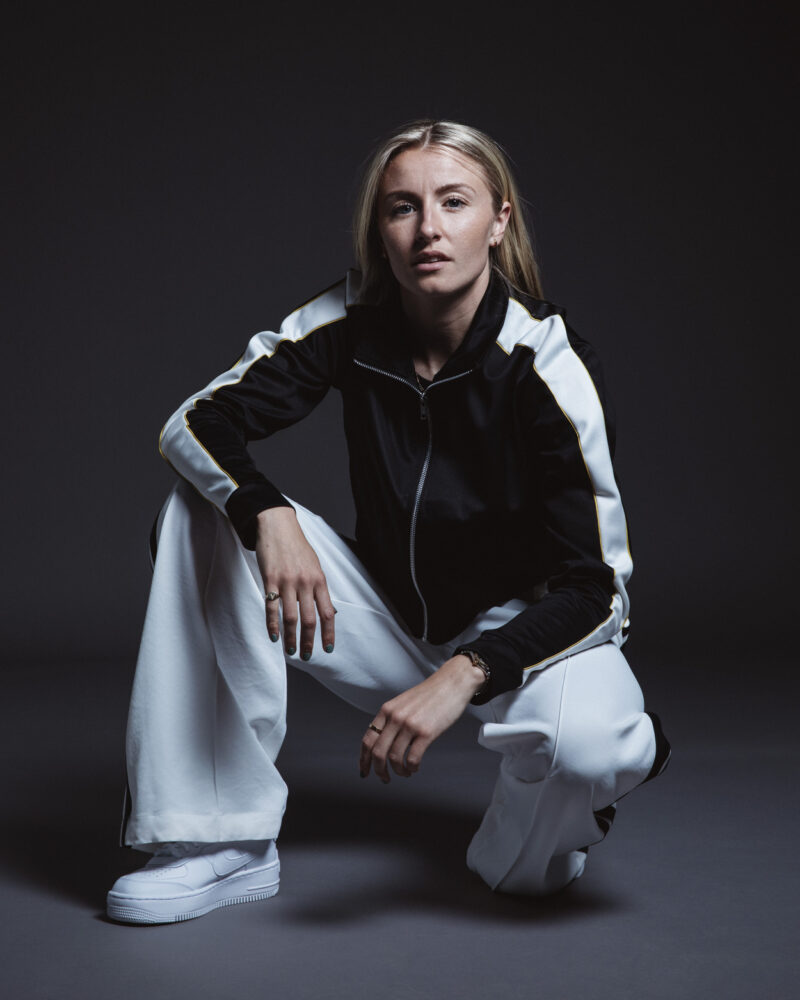 VERSUS: Firstly, tell me about some of the women who’ve inspired you on and off the pitch?

Leah Williamson: Most of the women’s Arsenal team to be honest, the iconic Kelly Smith and Alex Scott. My mum! And Jessica Ennis-Hill outside of football…

Your mum played football didn’t she, and isn’t there an Arsenal link there too?

Oh God, yeah. She played football for Milton Keynes when she was younger, and they knocked Arsenal out of the FA Cup…a long time ago! But she never lets me forget it!

To be inspired by those Arsenal greats and then to play with some of them, what was that like?

I think when I got into the team, realising how amazing those women actually were, somebody like Alex Scott, and what she ended up doing in terms of helping me to develop both personally and professionally. I’m forever grateful for her support and guidance. I think I definitely idolised the ‘right’ people, so to speak.

“The women’s game has a lot to offer people both on and off the pitch. It always has, it’s just now people have their eyes open to it.”

And when people refer to you as a role model today, was that ever something you envisioned when younger? It must be quite surreal at times to hear people speak about you that way, you’re still only 25-years-old!

Growing up, I definitely didn’t envision that for myself. At all.

You know, it’s one of those things where you don’t ever really see it as a tangible ‘thing’, if that makes sense? It’s not really something that you can ‘tick boxes’ in order to achieve – there isn’t really a role model trajectory or road map to follow! So it isn’t something you ever really set out to achieve. I think it either happens or it doesn’t. Sometimes you just sort of have to pinch yourself because it can be a bit weird when someone says they look up to you. I think, why? I’m just being me!

Don’t get me wrong though, I do understand it, because like I said, I also had role models who I looked up to and respected. Being a professional athlete, it does come with that territory. But at the end of the day, I am just Leah.

I think you make a really interesting point about idolising the ‘right people’. I don’t think everybody does that, and it’s one of the reasons why I think this campaign is a solid one. It’s giving people – especially young people who can be quite impressionable – a range of role models they ought to be idolising…

Yeah, 100%. I think that’s the beauty of the game in this day and age too. There are so many role models in women’s football for a young audience to admire and take inspiration from.

The women’s game has a lot to offer people both on and off the pitch. It always has done, it’s just now people have their eyes open to it a lot more.

And how does it feel to be featured in Pepsi MAX’s ‘Icons Unlocked’ series? I think the wry smile says it all…

Yeah, I think – again – you just focus on doing your job everyday and doing it well. To a standard you’re personally happy with, that’s really important. If you do that, then maybe one day someone, or in this case Pepsi MAX, will give you recognition for the hard work you’ve put in. When those moments happen, they make you stop and think: “maybe I can be happy with the progress I’ve made”.

“I think sport has the power to change people’s way of thinking. Not everyone’s ‘sporty’, but everyone can see the positives and possibilities sport can bring to society.”

How does Leah Williamson inspire others?

I think by being my most authentic self. For me that means, playing with a lot of emotion and being fully committed to the cause – whether it’s football or something else.

I play not just for me but for my family, my club and my country. And in turn, I hope that will always be enough.

But you know, to represent and play for those people, I make sure I give everything I possibly can. Hopefully that comes across, and people see me as someone who’s genuine in their actions.

I know what my role is, and a big part of that is growing the game but also making sure I do it for the people that I love as well as myself. I hope, in turn, that inspires other people to do the same in their own lives. Whatever that might be! You don’t have to be a professional athlete to live your life that way.

“I want to be known as someone who wasn’t afraid to be herself and also inspired others to do the same.” 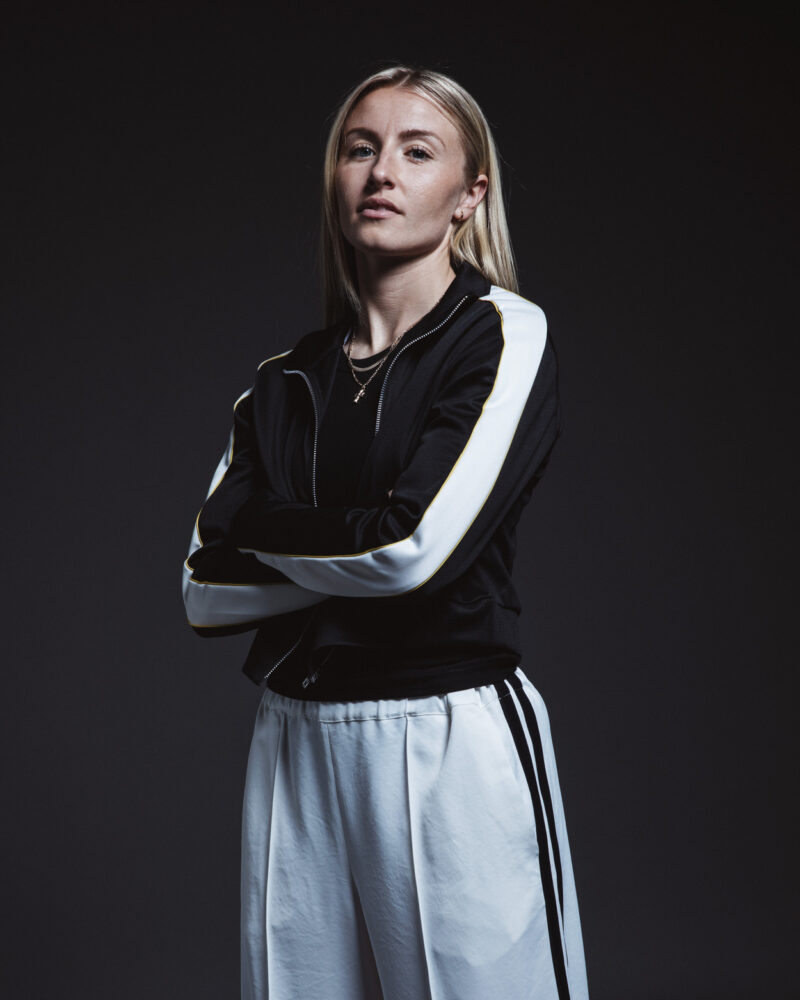 I think that ties in quite nicely with the next question: why do you think it’s so important nowadays for fans to see players as people, as well as athletes? For such a long time, the only thing the wider community cared about in football were the 90 minutes on the pitch…

I think firstly, we’re building a better society – one where we are always trying to grow, regardless of what job people might have.

I also think, if you can recognise the ‘human’ in someone, and sort of separate them from their ability or skill, that’s a really strong trait to have. And I think that by showing people we aren’t one-dimensional, that certainly helps people to achieve that perspective. Which you hope, can only lead people to treat one another a little bit better.

I think sport has the power to really change people’s way of thinking. Not everyone is sporty, but everyone can see the positives and possibilities that sport can bring to society. You can watch someone like Michael Johnson race, beat a World Record and just be inspired by his work rate and tenacity. It doesn’t necessarily mean you then go and start training for an Olympics! But you can take inspiration from other’s achievements, and don’t get me wrong, not everyone can make that ‘link’ but I think the more you see footballers for example as people, you can be inspired by us in ways you didn’t initially imagine.

I think humanising athletes also makes us seem like we’re within reach. Not everyone is going to be a top athlete, but that doesn’t mean you can’t look up to them or aspire to be like them as people. You just need to figure out what that means to you.

I think that’s a really progressive way to look at the notion of being a ‘role model’. Taking elements from people’s game and how they conduct themselves in all spheres of life, to better your own sense of being. That’s powerful. Legacy also plays its part when it comes to all things ‘role model’. What do you want your football legacy to be?

Obviously, I’d like to look back on my career and see it be filled with trophies and medals, but in terms of legacy…personally, like I’ve said, I want to be known as someone who wasn’t afraid to be herself and also inspired others to do the same.

“We need to ensure everyone has access to opportunities so they know they can follow in our footsteps. We need to promote diversity, and the value it brings to football.”

A vital part of legacy-building is helping to make the future a better one for the next generation. What are some of your hopes for the future of women’s football?

Mmm…my hope for football is – especially for those coming up the ranks – it’s really important young players realise they don’t have to sacrifice being human to be at the top of their game. We’re not robots.

And in terms of making sure they realise being a professional footballer is achievable, we need to ensure everyone – no matter where they’re from – has access to opportunities so they know they can follow in our footsteps. We need to promote diversity, and the value it brings to football.

Which is why it’s important to share not just your story, but also Millie (Bright) and Nikita’s (Parris), who are both a part of this campaign.

We’ve spoken a lot about your values and how you want people to view you as a role model, but if you were to describe yourself in three words…

Do you think your teammates would describe you any differently?

I don’t think they would, you know. I mean, they might use a few other words I can’t really say! But they always know I have the best intentions…I hope anyway!

I’m sure they do! VERSUS has spoken with a few of your teammates this season, and they speak very highly of you. Especially when it comes to all things fashion! You’ve definitely been described as the most stylish by some of your Lionesses’ teammates. Has fashion always been an important way for you to express yourself?

Yeah, I think it’s my way of expressing who I am. I’m an individual and fashion is my way of showing self-love. I like to look good and feel comfortable, but I also hope the way I dress shows people that you don’t need to follow trends. Just do what you want to do, wear what you want to wear. If it makes you happy, then that’s good enough.

Haha! If you say so!