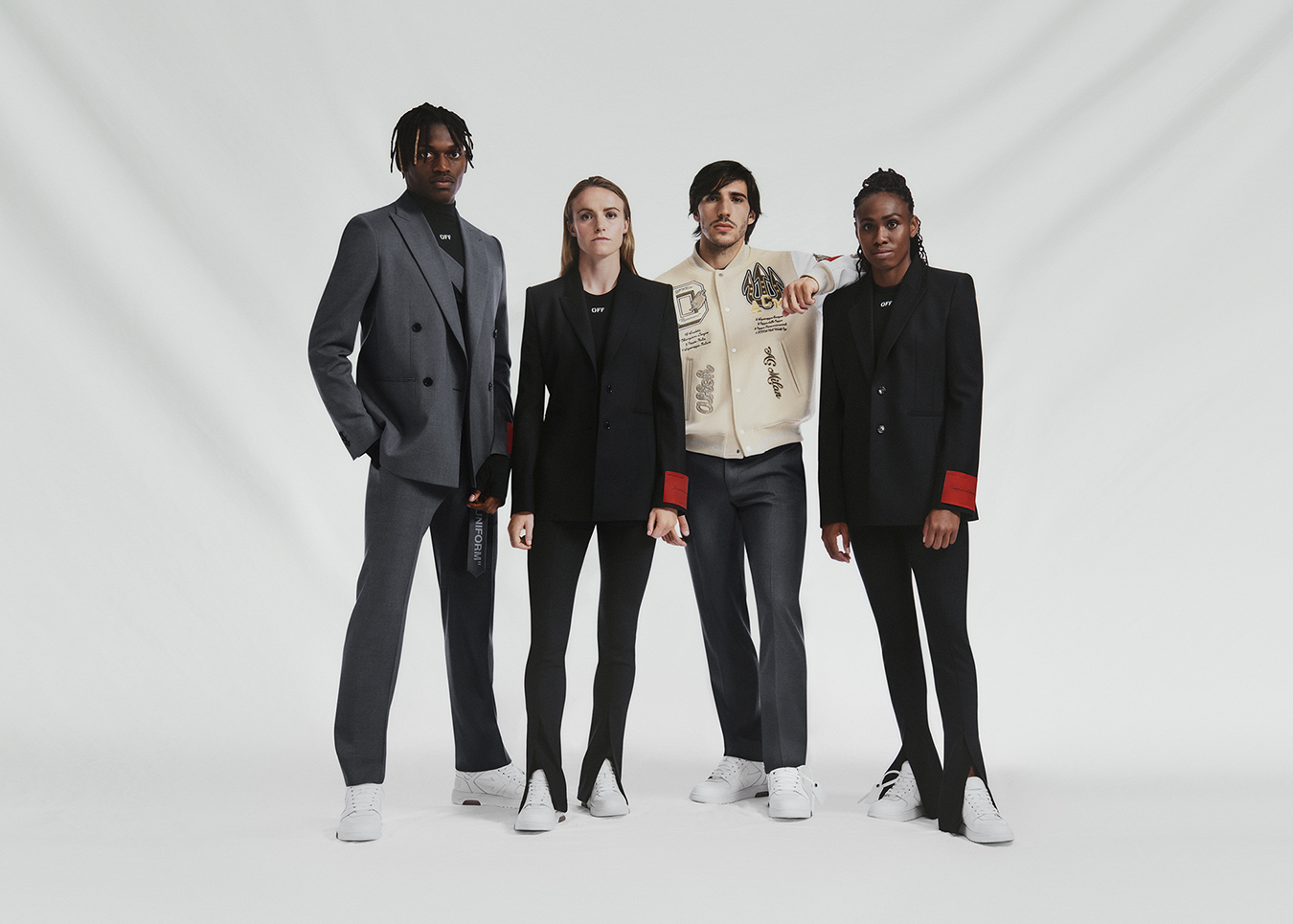 AC Milan and Off-White’s debut collection has officially been unveiled.

The game-changing collaboration between Virgil Abloh’s pioneering fashion imprint and the Serie A champions sees the designer brand take on the role of ‘Style and Culture Curator’ for the club.

The three-year partnership was first reported in August, and officially debuted on the (airport) runway before their fixture against Chelsea in the Champions League last week.

Taking the reins of the Rossoneri’s formalwear and off-pitch attire, the partnership comes at a time where Europe’s elite clubs are making bigger strides into the world of fashion, with Inter and Roma both signing deals with Moncler and Fendi respectively.

AC Milan and Off-White’s “Wear Your Heart on Your Sleeve” campaign, and debut collection encourages AC players to physically represent and support the causes they most believe in, and incorporates Off-White’s “I Support” message, first introduced by founder Virgil Abloh in 2020.

The pledge encourages players and wearers alike to represent the causes they most believe in, with the partnership supporting Fondazione Milan – AC’s charity foundation.

The collection takes on two styles – formal and informal – the former being teased late last month, and the latter making its debut last week ahead of their Champions League clash against Chelsea.

This collaboration is a marker for the direction football is going in, and its ability to effortlessly cross-paths with culture. Milan are firmly leading conversation as one of the world’s most stylish sides, and rightly so.

Take a look at the full collection below. 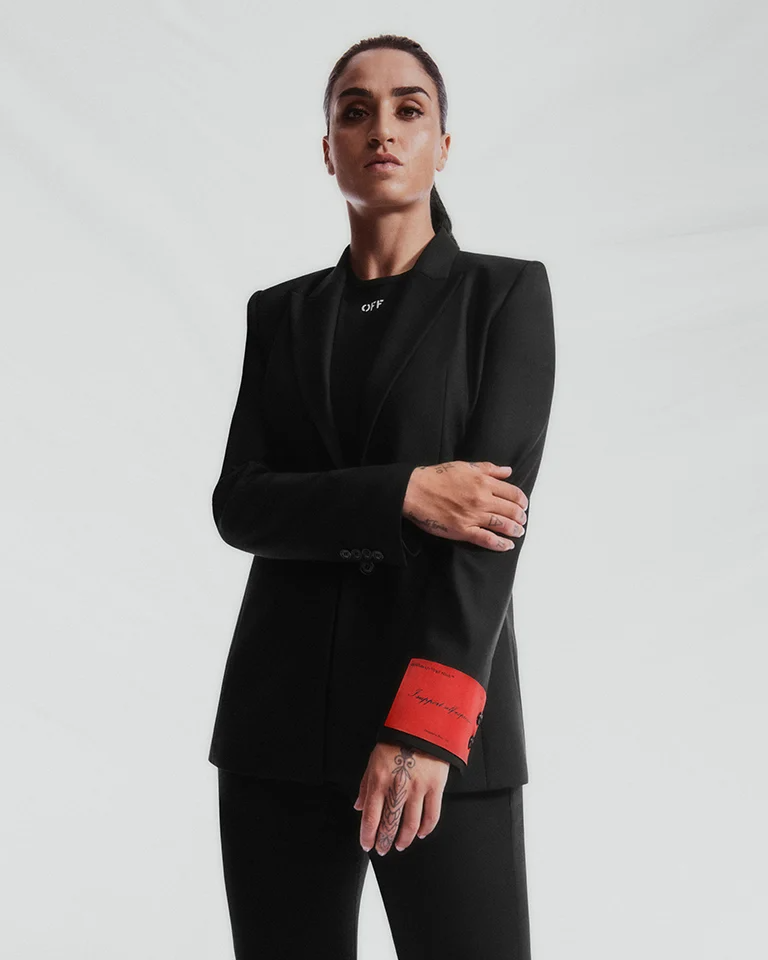 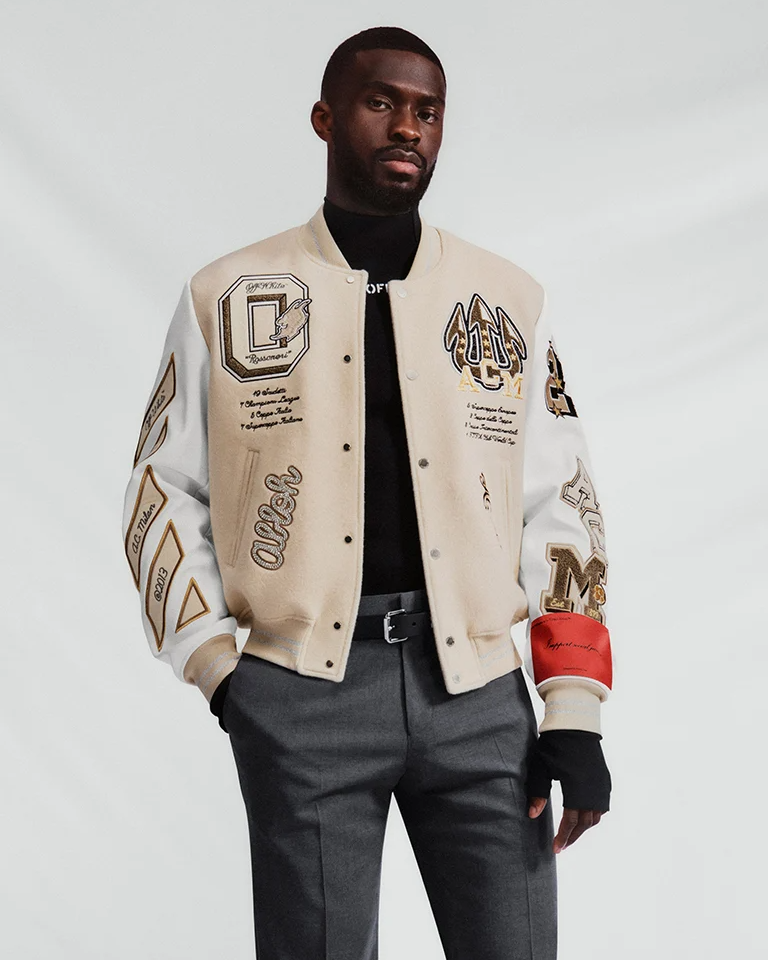 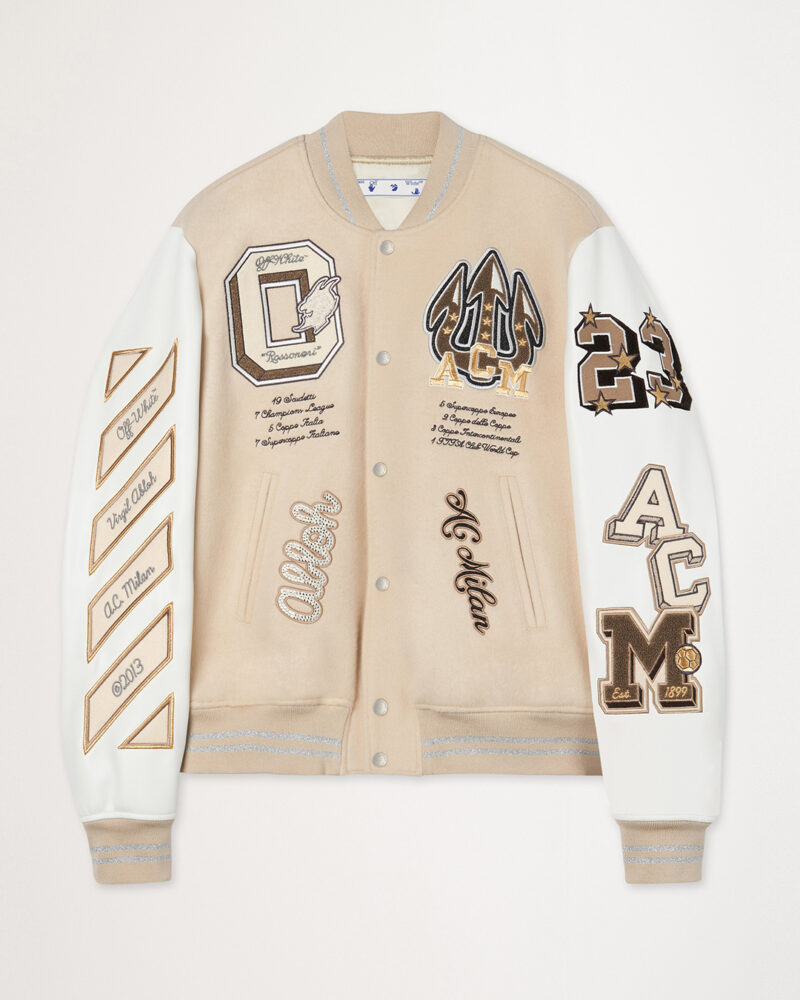 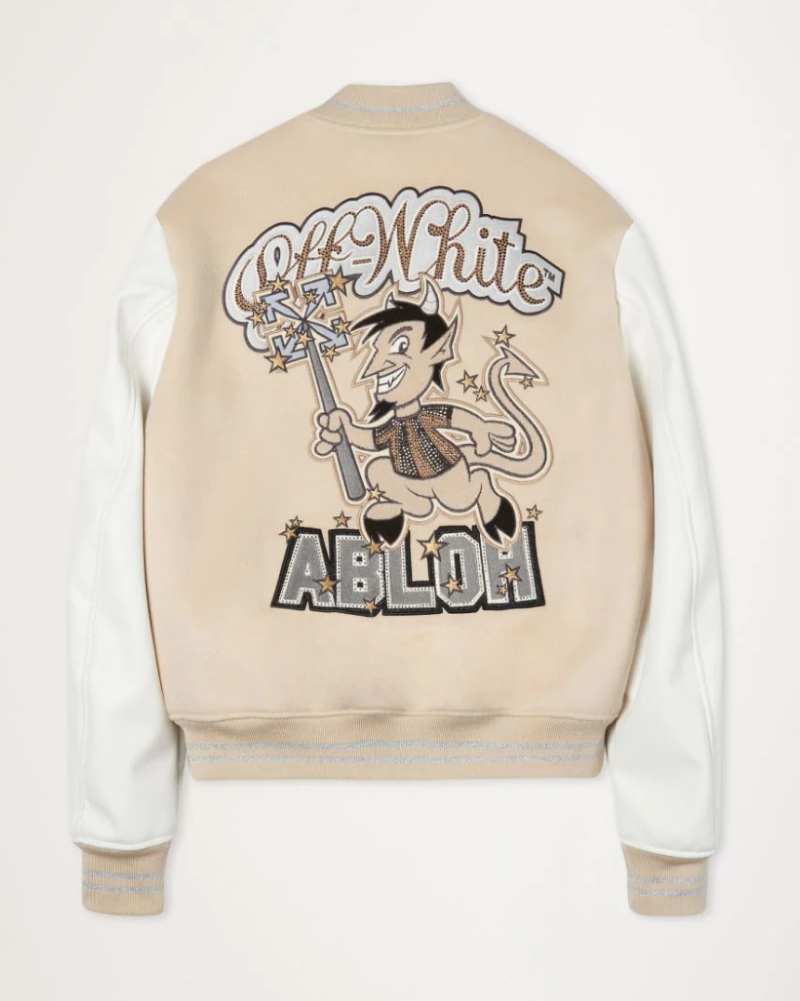 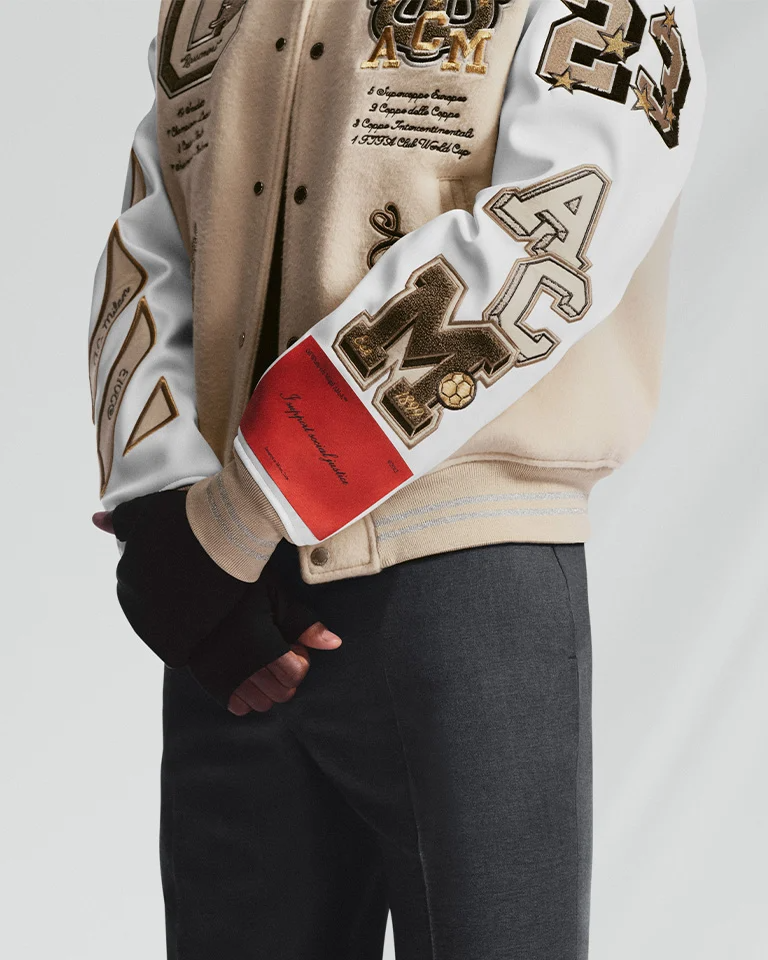 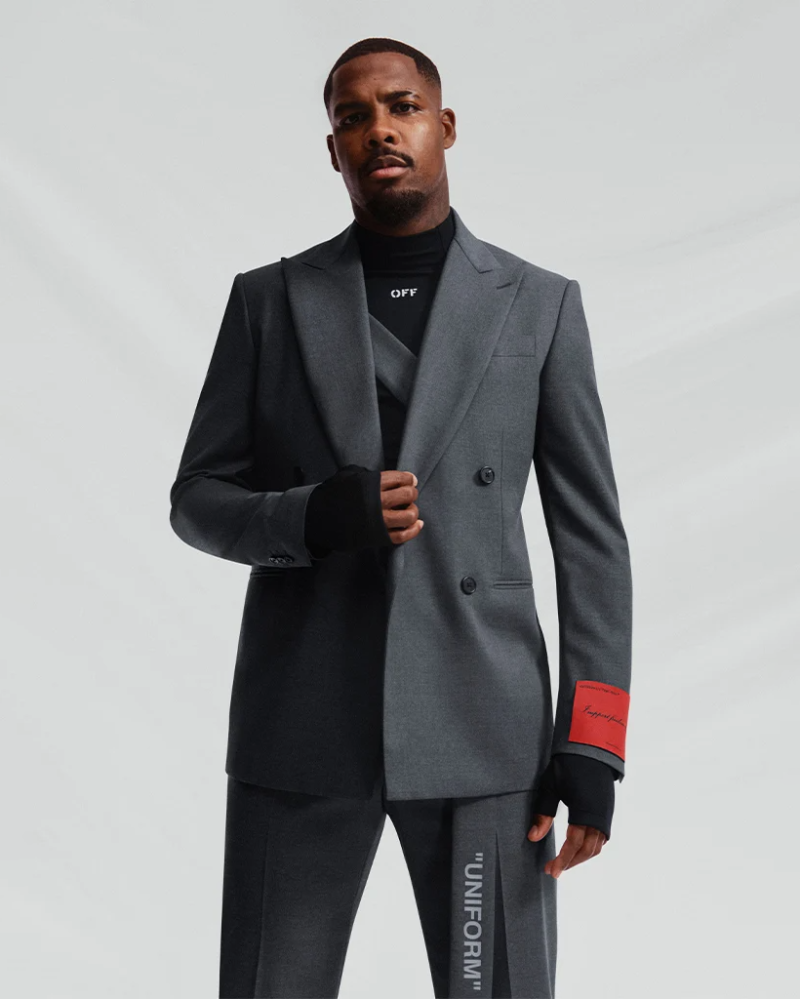 The formal attire features the teased double-breasted jacket, adorned with a red statement label that reads “support sport for change” – a nod to the campaign that is shared across the collection. Players then have black suit-style trousers to match, alongside the choice of a white or black t-shirt in short or long-sleeve that features the “OFF” stamp logo across the chest.

On feet are white-leather sneakers that feature the signature lateral arrow and hangtag, and accessories include a black belt and AC inspired checkerboard patterned scarf.

The informal retains all components of its counterpart bar the double-breast, which is switched out for the highly talked about varsity jacket – a hallmark of Off-White’s range. Coming in beige with white-leather sleeves, the jacket is emblazoned with graphic patches that pay homage to AC, the standout being the inclusion of their diavolo mascot across the back.