Becoming a professional football player is the ultimate dream for most youngsters. Not only is it a job like no other, your elevated standing within society makes you a hero to your community.

This is a global phenomenon. From Sao Paulo to South London, professional footballers have enabled their communities to dream big and believe that nothing is impossible. Over the years, the Concrete Catalonia has seen roses rise from cement. The cages in areas such as Aylesbury and Kennington have produced Premier League steppers and Champions League hitters.

One of the most prominent products in recent times is Reiss Nelson. While the home of the brave is renowned for the tenacious talents it produces, it also builds a human being cut from a different cloth.

Reiss is the epitome of that and more. He may be in one of the best spells of his career with table topping Arsenal, but the 23-year-old’s importance off the pitch is even greater.

Since being at the North London club, Reiss has always given back. Whether that’s coaching in local areas or featuring in campaigns like No More Red to combat knife crime, Nelson is one of those heroes that understands that his job is not to take away from the community, it’s to be a pillar for it.

His latest step in that journey is a lifelong dream of his. The former cage at his Michael Faraday Primary School has been renovated and installed with a new pitch and floodlights, all provided by the Hale End graduate. It was once the place where he dreamed, and now he’s enabling the dreams of another generation.

The project is one that is embedded within the community. A South London originator and Arsenal legend, Ian Wright was present to unveil the pitch alongside Reiss. Also present were Mentivity, an intergenerational mentoring organisation that will benefit from using the pitch. Founded by Sayce Holmes-Lewis – a former coach of Reiss and fellow South London representative Jadon Sancho – this was truly a full circle moment in more ways than one.

VERSUS caught up with Reiss to discuss why he wants to give back, what makes South London ballers who they are, and the importance of football on younger generations. 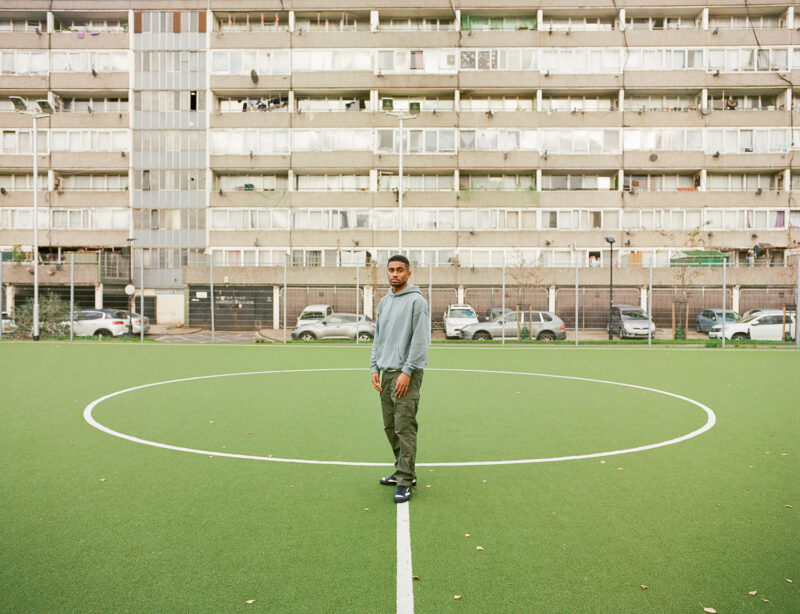 VERSUS: How are you feeling at the moment?

Reiss Nelson: I’m feeling very good. I’m very confident, especially in my play at the moment. Things are good on the pitch. I’m just happy to do things for the community and just do good things in general.

Football is something that has enabled you to have many experiences. What are your earliest memories of playing?

Probably me in the house with my brothers, my sister and my mum. Getting the ball and literally just kicking it everywhere. My mum, shouting at me for hitting vases and all sorts. I just remember everyone being so happy. Football was always present within that.

Everyone locally knew me and would see me with a ball at my feet. Wherever I would go, I would have a football.

As someone who is always giving back to the community and has siblings who have done the same, what does it mean to you to be opening this pitch at your former school?

This is something I’ve always had in my head and heart to do from when I was young. I remember it being around Year 5, and I made a promise to myself. If I got as far as I wanted to get, this [opening a football pitch at the primary school], is one of many things I would do to give back.

This is a school that my sister used to work at, in the area that I grew up in, a stone’s throw away from my house is where the pitch is. When I used to be late for school, I would jump out the window and literally just run down to the school, so this location means a lot to me. 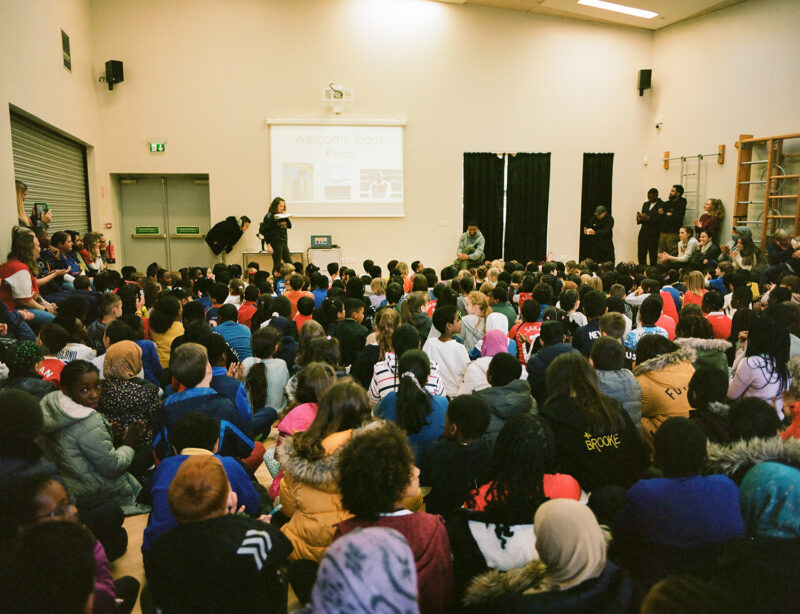 What does the word community mean to you?

Community means everything. Some people may not have their parents or daily mentors around. Community however is family. Whether that is friends or neighbours. People coming together and providing for those who don’t have. I’ve witnessed that in my life. My brother and sister were community workers and after school, I would run to Peckham and see my brother’s sessions. 30 odd kids would come out of the blocks and have a real energy and love for what they were being given.

That is the great thing about community, everyone is helping each other and trying to provide. But we need to do more of it. That’s why I have always wanted to do this. That is why people like Sayce are leading the way and showing people how to do that properly.

Footballers are great examples of individuals who come together for a greater cause. What lesson can communities learn from football?

People are from all different backgrounds and we all come together for one common goal. In football that is to win games and trophies and win together. I think that is the same for communities. If you are aligned, you can go further. If you are trying to do loads of different things, it doesn’t always move you forward. Whether that is agreeing on how to stop knife crime, coming together to implement food banks, I think so much more can be achieved. All align and come together for one cause, that would be the lesson. 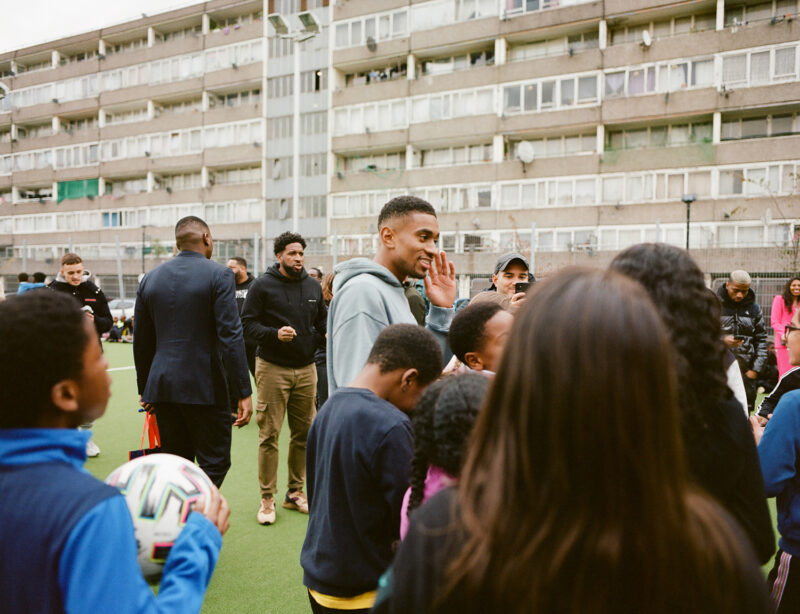 You have the dream job of being a footballer but it wasn’t always a job. How important is it that kids can have football as a way of expressing themselves?

I feel that football allows everyone who plays to feel free. Loads of different people come together on a pitch to play this one game and express themselves. Everyone can be themselves when playing football. No one has to think about anything outside the game during the time they are playing. Nothing about their troubles or things affecting them. This game lets you feel free. That’s what I learned when I was young

It could have been a thing where certain things happened at home or I hadn’t had the best of days or there was family stuff, but I knew that football was there. I could go out, play football and come home happy.

South London is notorious for being a hotbed for talent. What is it about South that produces such ballers?

To be honest, I don’t know. When you break down the numbers of how many people from South make it, and then make it into the Premier League, and then go on to do amazing things, it’s crazy. I think it’s because there is so much raw talent and these kids are pushed to use it. They may be coming from rough backgrounds but football is the only thing on their mind: ‘My family may be in an unfortunate position but let me bang out football and see if I can change that. Let me do this every single day until I become the best at my craft.’ 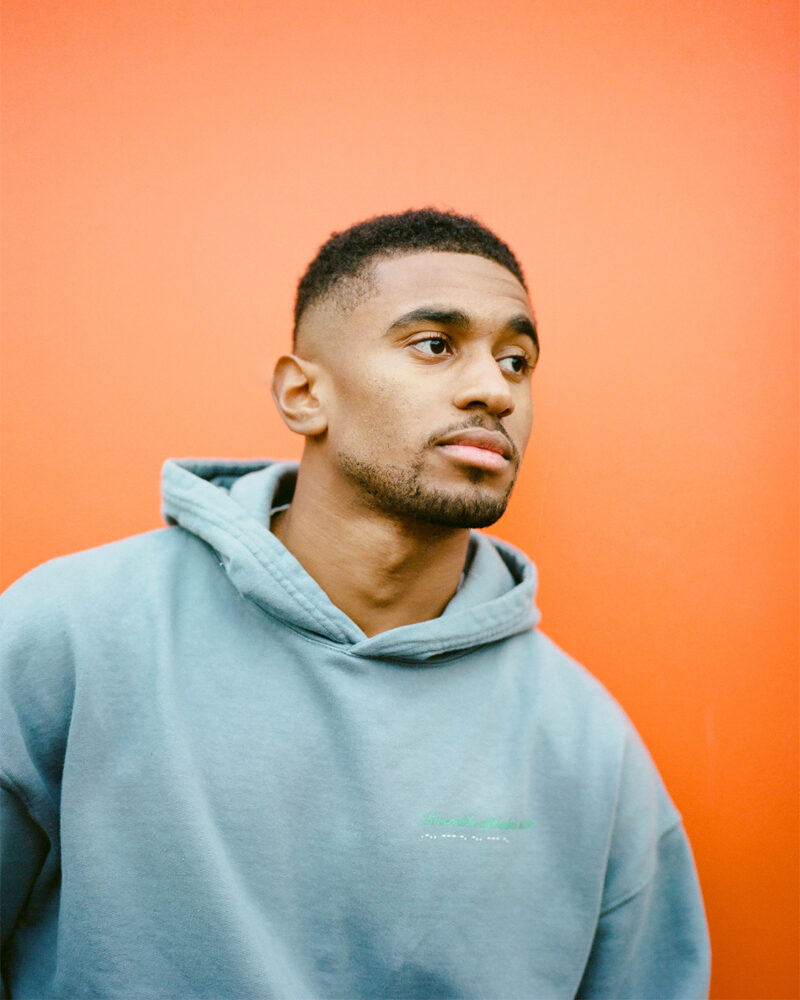 As a footballer and young man, you have become a role model for how you have navigated through difficult times. What advice do you have for younger generations that will have to do the same?

Firstly, everyone has their own journey. Good things come to those who are persistent and give 100% to everything they do. That isn’t just football, that is life. Sometimes, people can have good things but things may be going bad for a moment of time. They might look elsewhere for an escape but if you concentrate and lock in on what you are facing, and you think about how you can get better, it all comes good in the end.

I have had times where I felt really down. I felt like nothing was working, that I needed to move on from this or change everything, but I always had the main goal and the faith that It would all come right at the right time.

I believe a lot in God and believe the right things come to those who wait and do good for others.

It’s funny because in sport, sometimes I think that people forget about the human side of it all. Sometimes we are perceived as robots with no feelings and we are only doing one thing. But I love fashion, I love music. If my friend brings out a song and asks me to promote it, I will help him.

Sometimes you may get people who ask ‘why are you promoting?’ But I feel like it’s sad because professionals give their whole life and you get to a level where you are criticised for doing things you have always done. So as it relates to giving advice to the younger generation, I would say you have to be yourself all the time and embrace it.

This is special because it’s the first pitch I have done. I feel like it’s come at a good time. This is my pitch, my primary school. I wanted the first one to be for the school I went to, but the ultimate goal is to do more. More in South. More around the world. That’s what’s in my heart.

With the team, we have been building for the last two years and what we want to do is amazing. It has all the right elements of uplifting communities and ensuring that there are more Sanchos and more Tammys. This pitch right here is an example of providing a platform for young kids to be like their role models.

If you could tell a younger Reiss Nelson something, what would you tell him?

When you are young, you don’t know the future. I wouldn’t say anything. The struggles I had moulded me into the person I am today. The main thing for me would be to embrace it all. Laugh more, see my friends more, see my family more. But I would just carry on the life of younger Reiss and enjoy the journey. 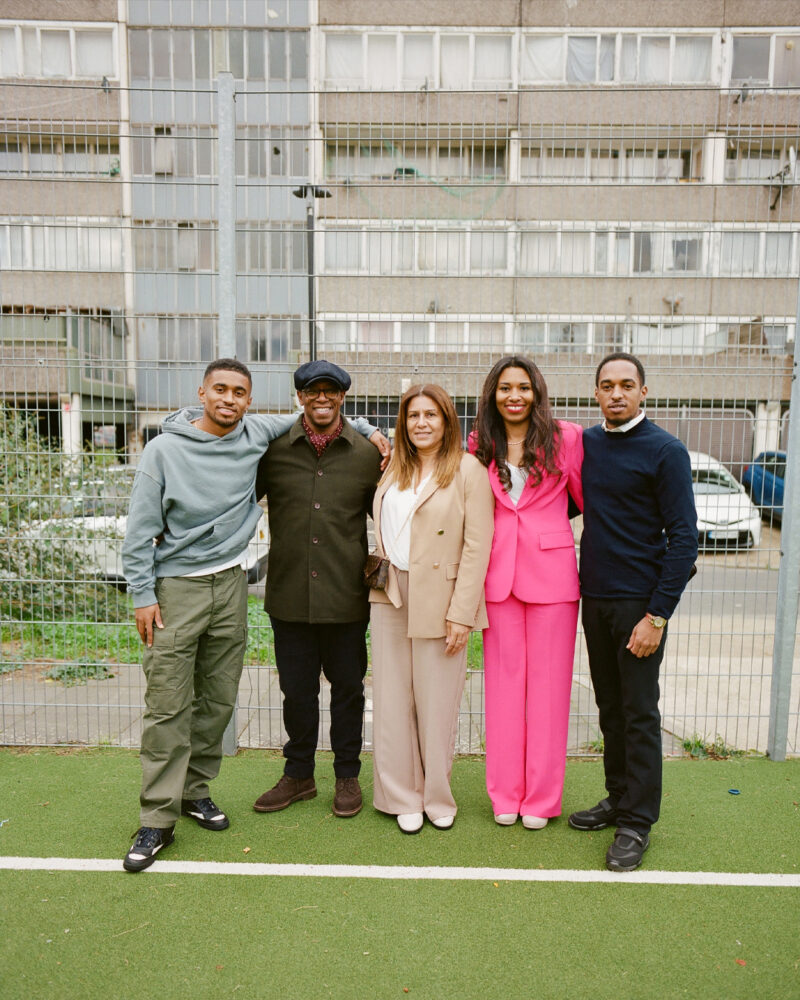