Although we are thankful to the generation before us, who often held down one steady job and specialised their skills. It seems as though the new generation are obsessed with the exploration of unfamiliar realms of creativity, unbound previous interests. This is where the label “slash generation” originated and at 21-years-old, Rufaro Junior Clint is a prime example of this ethos.

The model/graphic designer/student represented by multiple agencies around Europe has recently taken to design and is exploring the new form of expression with a sponge-like attitude, soaking up techniques and attempting reinterpret through his own lens. Having only picked up the art of cutting and sewing in April of this year, Rufaro has been inspired by the announcement of the upcoming "The Ten" by Virgil Abloh in collaboration with Nike and has created his own interpretation of the design. Here’s how he did it.

VERSUS: Who are you?

Rufaro Junior Clint. I’m 21 years of age, based in Manchester and working as a Model during my gap-year from University. I am into playing sports (mainly football) and put my energy into all things creative. Currently, I’m on an ongoing pursuit to improve my graphic design and cut/sew skills. I have a handful of achievements that I’m proud of. If i had to pick a few, being represented by a modelling agency in Milan and the growth that I’ve had in cutting & sewing in such a short space of time, definitely are up there as may greatest achievements.

“Virgil Abloh exposed me to all the different compartments of a shoe which left me thinking about the process in a fresh way.” 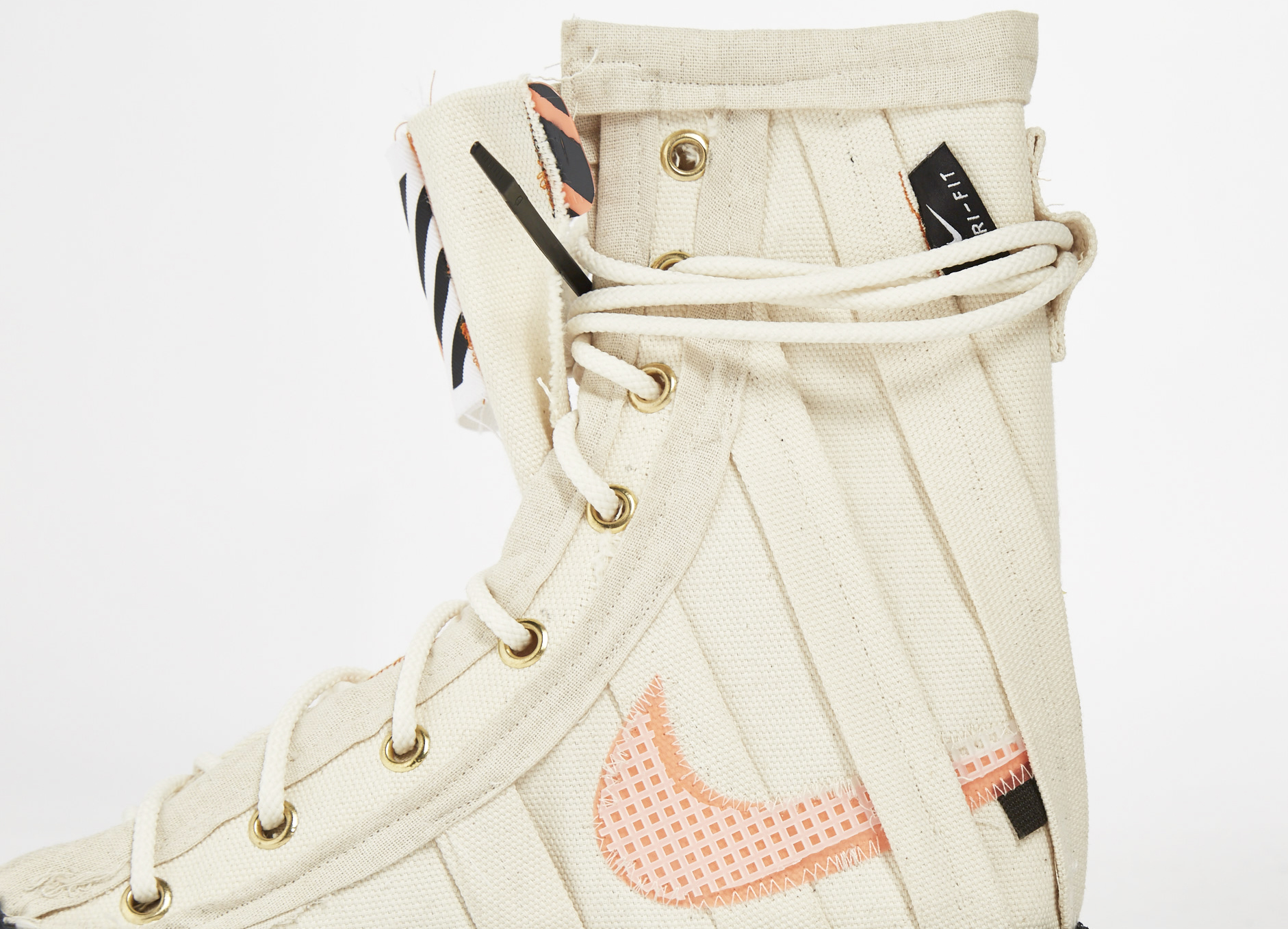 What inspired you to create your design?

The inspiration behind the shoe was from the designer himself. Virgil Abloh exposed me to all the different compartments of a shoe which left me thinking about the process in a fresh way. For example, by simply labelling the laces with “shoelaces” and exaggerating the stitching on the Nike swoosh with a zigzag pattern. Another inspiration for making the concept shoe came from reading the biography ‘Shoe Dog’ which gave me insight into how Phil Knight and Bill Bowerman came to create Nike and how they both used their initiative and the DIY method to stand out from their competitors and make Nike the company it is today.

I knew that in order to start the project I would need to firstly find the sole for the shoe. After doing research, I found out that having a unique sole can be costly so I used my initiative by cutting open a pair of my old Novesta shoes and using the sole as the foundation of the project. After having the base, all the other parts of the shoe I improvised and took inspiration from the original Nike x Off-White™ collaboration.

What experience have you had previously in terms of design? 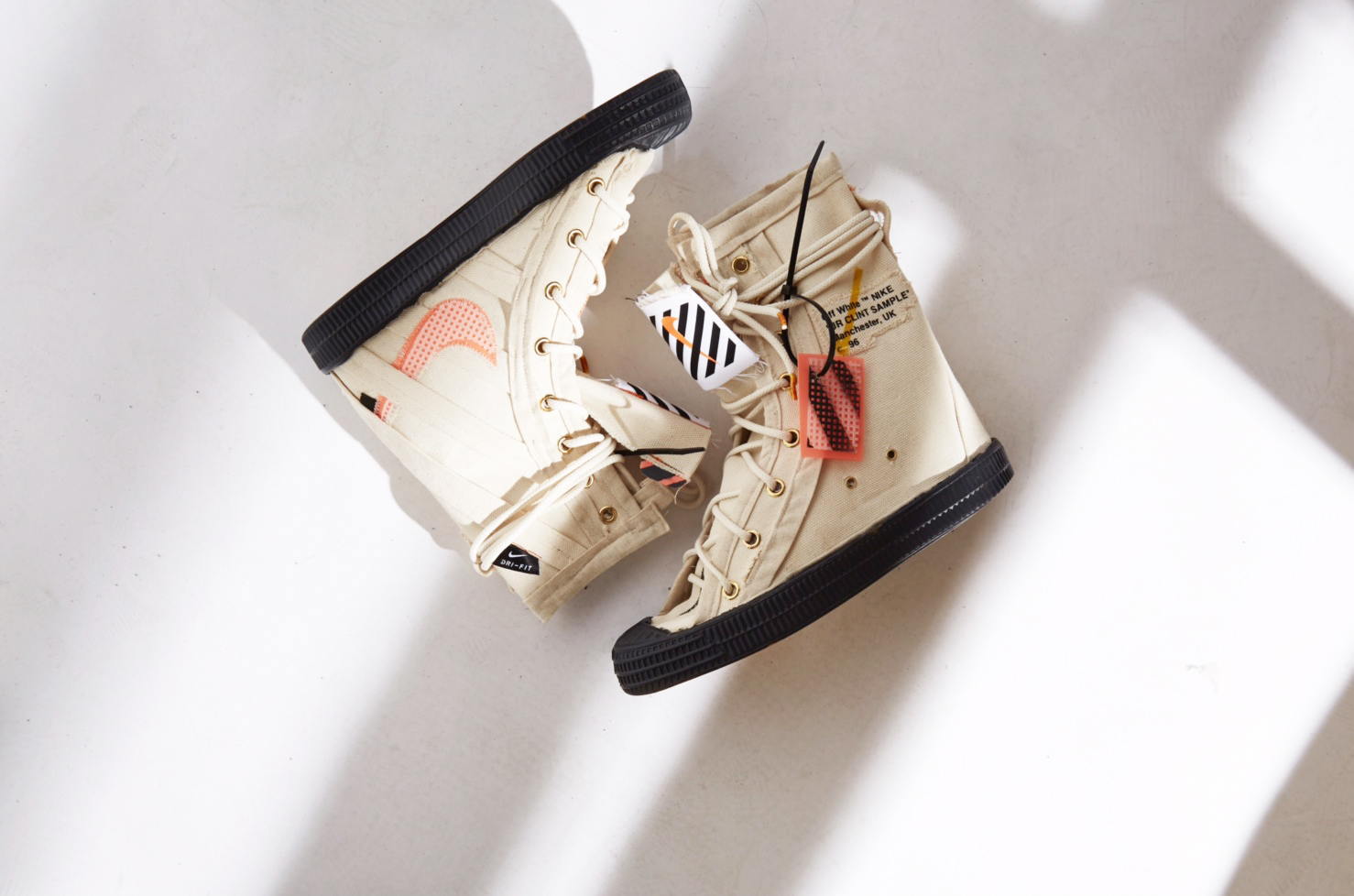 Give us an insight into your design process, how did you go about creating the shoe?

The source of material for the shoe was Abakhan Fabrics, Fred Aldous in Manchester. Once I had my fabric, I then cut off Novesta gum soles from an old pair of shoes and spray painted them with a cloudy grey colour. For the body of the shoe, I used ivory white canvas material and inserted gold eyelets for where the laces are inserted. The outer face of the trainer includes the detailed writing:

I then added see-through yellow tape for details. Under the writing I’ve added three small gold eyelets for a breathable feel to the shoe. The inner face includes, orange see-through plastic material which is overlapped by Darice Mesh plastic canvas, cut to match the shape of the Nike Swoosh logo which I’ve embroidered onto the fabric using a zigzag stitching pattern and is detailed with a black square shape at the tail of the Swoosh. I’ve also attached lines (inspired by the Off-White™ logo) that overlap the Swoosh.

On the tongue of the shoe, I’ve sewn a condensed zigzag pattern using black thread on the left sneaker and orange on the right. Similar to the inner face of the shoe, the logo on the tongue is an orange Nike Swoosh which blends in and out of the black lines. Both the printed writing on the side of the shoe and logo I designed in Photoshop and had them printed at my local printing store. To finish of the shoe I used white rope laces and spray painted black lines onto the remaining plastic material, which is sealed with a zip tie. The most difficult part of the project was making sure that both sides of the sneaker were symmetrical and adding the eyelets for the shoe laces to fit correctly.

“I think it’s one of the best collections of all time. I have many favourites but if I had to pick one, it would have to be the Presto.” 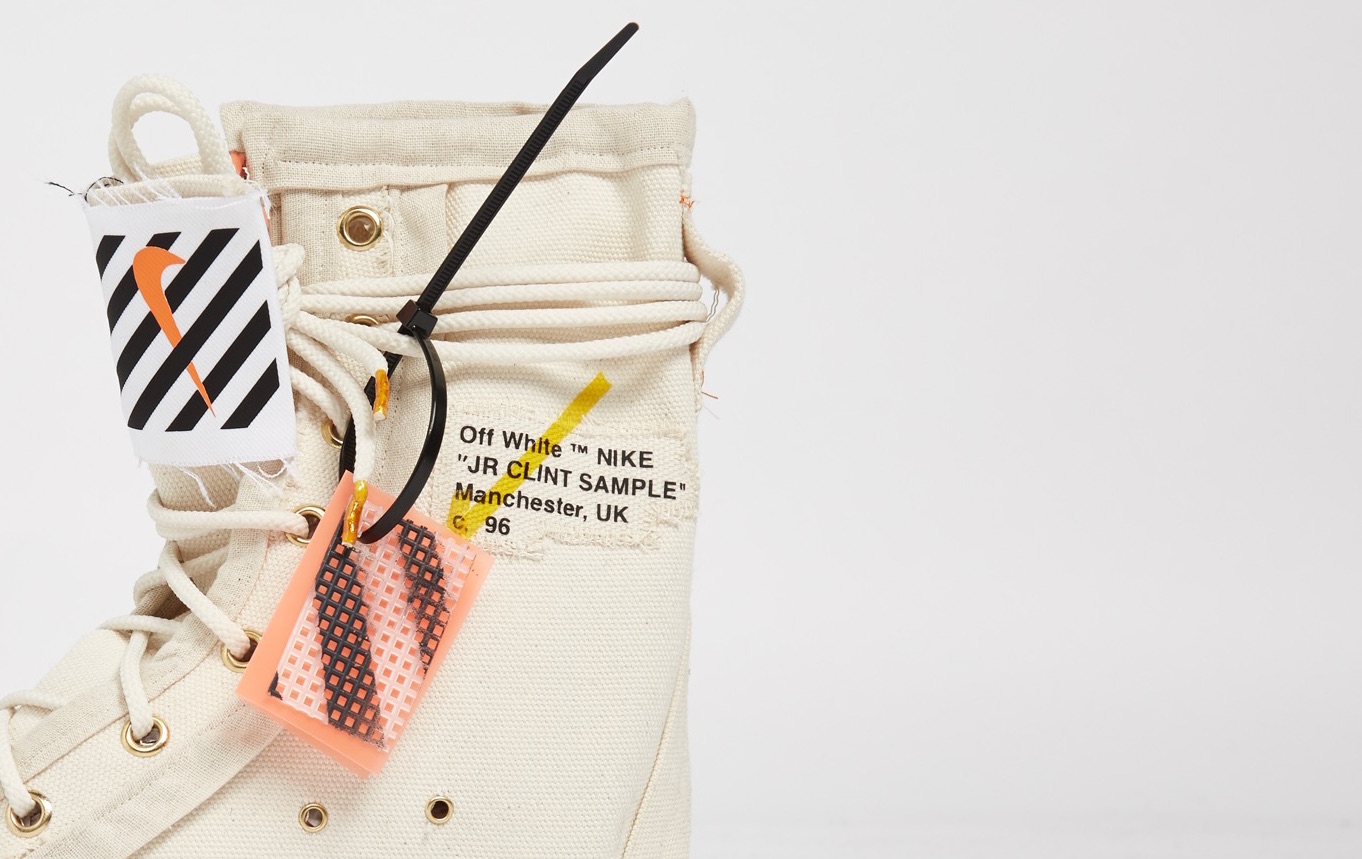 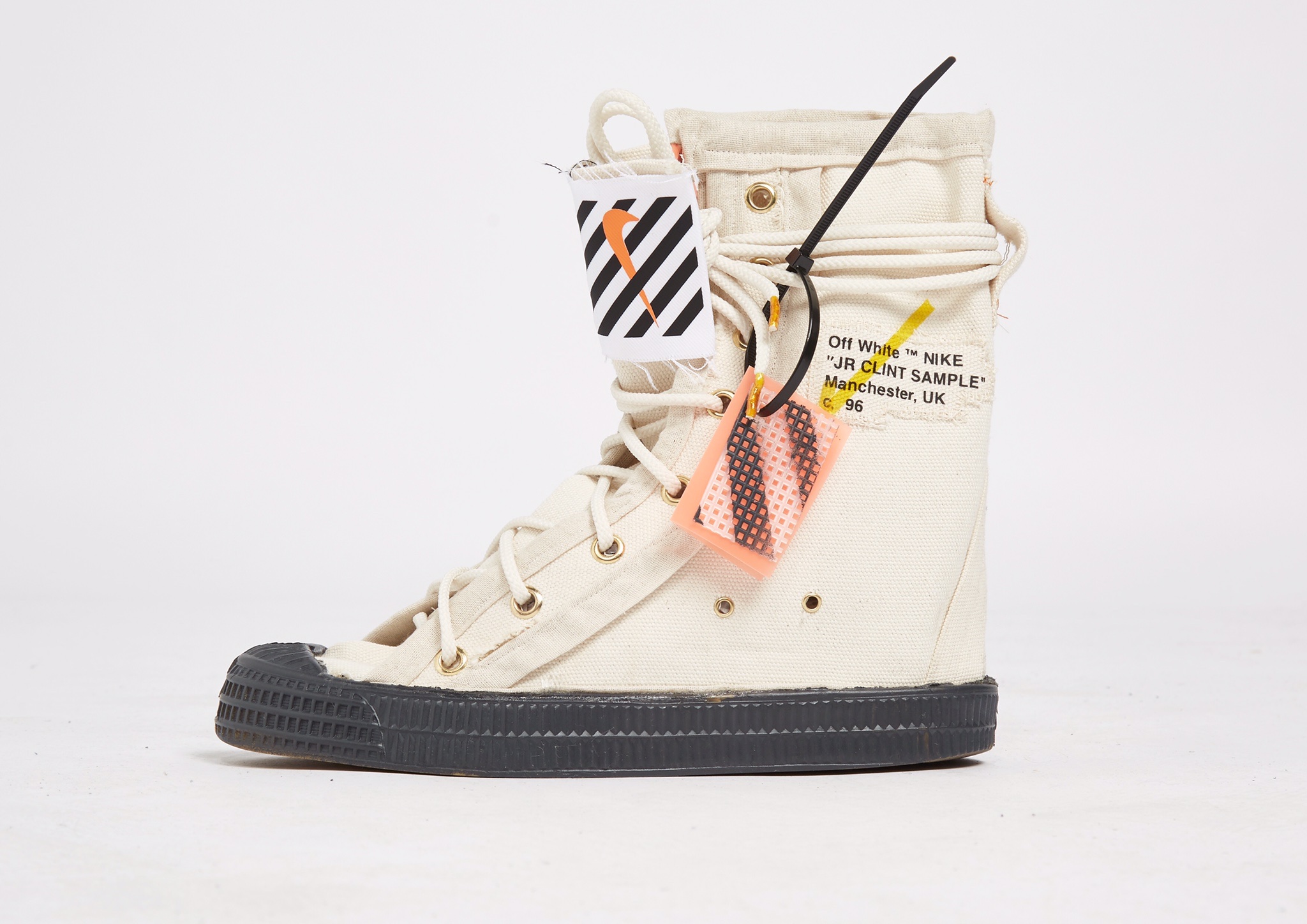 I think it’s one of the best collections of all time. I have many favourites but if I had to pick one, it would have to be the Presto’s. Mostly because of the texture and the silhouette of the sneaker. Virgil is an amazing designer and good example to all upcoming creatives. His brand ‘Off-White’ represents all things design, not just clothing. I believe that he pays more attention to the end-users usability rather than trying too hard to recreate the wheel which I feel all good companies do e.g Apple.

I respect Nike for what they stand for as a brand and the innovations they have brought to the sportswear industry. The OFF CAMPUS event in London is genius. The event should give more insight into the designs of the collaboration and from what I’ve heard, they’ll be tutorials on making/recreating a Nike shoe. Which I look forward to seeing and learning from, so I’m there for sure!

Stay tuned to Rufaro Junior Clint’s activities on his Instagram.