The rumours were true. With an unprecedented collaboration with Jordan Brand confirmed and set for an on-pitch debut under the Anfield lights in the Champions League, PSG have made an era-defining move in the world of football, solidifying their status as streetwear’s go-to club.

Despite managing to rile up dismay amongst the ‘modern football is shit’ crowd – “What does Michael Jordan have to do with football?” – aesthetically, you’d be hard pressed to find anyone who thinks the kits aren’t easy on the eye, joining the club’s home and away strips as arguably the strongest kit range in world football.

Nike’s 2018/19 kits for the Parisians are lauded because they truly reflect the club’s symbiotic relationship with football and fashion, with both home and away jerseys a tangible extension of the city’s street style. And it’s the last decade in particular which has cemented PSG’s status as a streetwear staple, with the culture’s emerging influence within high fashion gaining pace in unison with PSG’s ascension as a moneyed football superpower.

The time is right for PSG to break new mould by becoming the first club to sign a deal with Jordan. But the big question still to be answered by every ‘football purist’ and ‘yer da’ on Twitter: why has this happened? And why is a Jumpman logo on a football kit authentic?

“No other major football city loves the Jumpman quite this deeply.

Jordan is a brand that’s weaved tight into the fabric of Paris. Michael Jordan himself visited Paris at the time of the first Air Jordan release in 1985, and the city was chosen to be the destination for the first ever Jordan Brand store in Europe. Jordan also supports the city’s annual Quai 54 streetball tournament, contributing to Paris’ street culture on a very real level. Jordan Brand is everywhere in Paris, and no other major football city loves the Jumpman quite this deeply.

But it’s not just Jordan Brand who are bringing the universal appeal to this collection. Since Qatar Sports Investments takeover of the club back in 2011, the PSG brand has become a cultural behemoth; blowing billions on the best talent in world football and weaving itself into the culture so relentlessly that they’re now regularly seen on the backs of the world’s biggest athletes, musicians, and influencers, as part of an expertly-curated, money-no-object backing. 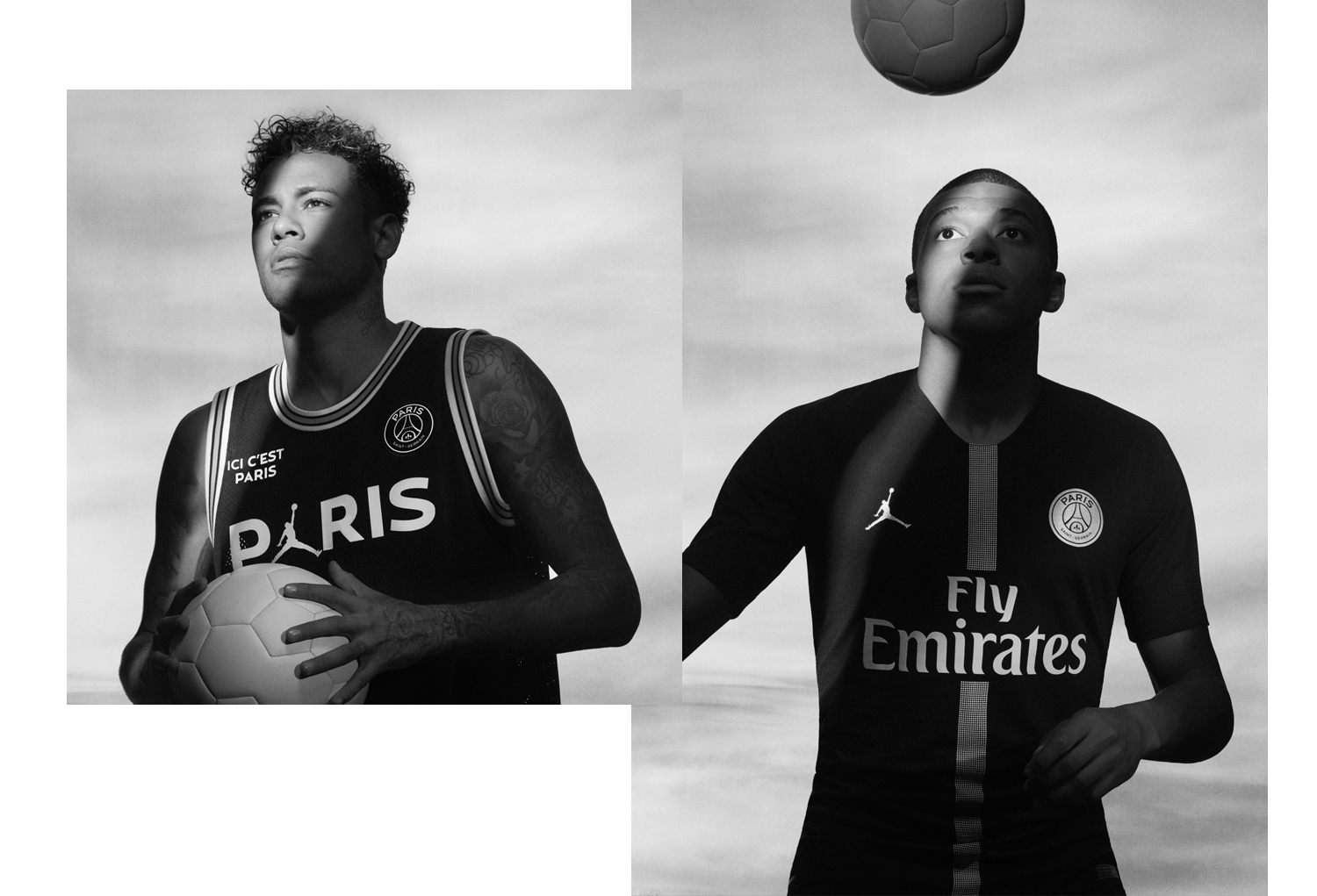 Attracting superstars such as David Beckham, Thiago Silva, Zlatan Ibrahimovic and Gigi Buffon has continued to boost the spread of the PSG brand to football fanatics across all corners of the world, as well as making them a force to be reckoned with on the pitch, too – they’ve won five of the last six Ligue 1 titles.

There’s also the small matter of the world’s most-expensive and most-marketable player – Neymar – who typifies PSG’s approach to maintaining their cultural status; spending the largest amounts on the most-hyped commodities in the game. After Neymar, they dropped the second-highest transfer fee for the new hottest property in the game, Kylian Mbappé. All eyes are on the French golden boy, who has become one of Nike’s most prominent poster boys after securing France’s second World Cup at just 19-years-old. Alongside Neymar, he forms arguably the most exciting and globally-recognisable forward line in world football.

What’s particularly interesting is how well these two gel into PSG’s ethos: both hugely talented, fashion-conscious Nike athletes that are idolised around the world. They’re both perfect exponents of PSG being a streetwear-oriented football club: Neymar often papped in OVO and Supreme x Louis Vuitton, while Mbappé launched an exclusive Off-White football boot and has made it into Skepta’s personally curated Sk Air gifting list. Stuff like this only increases how synonymous PSG and its players have become with streetwear. 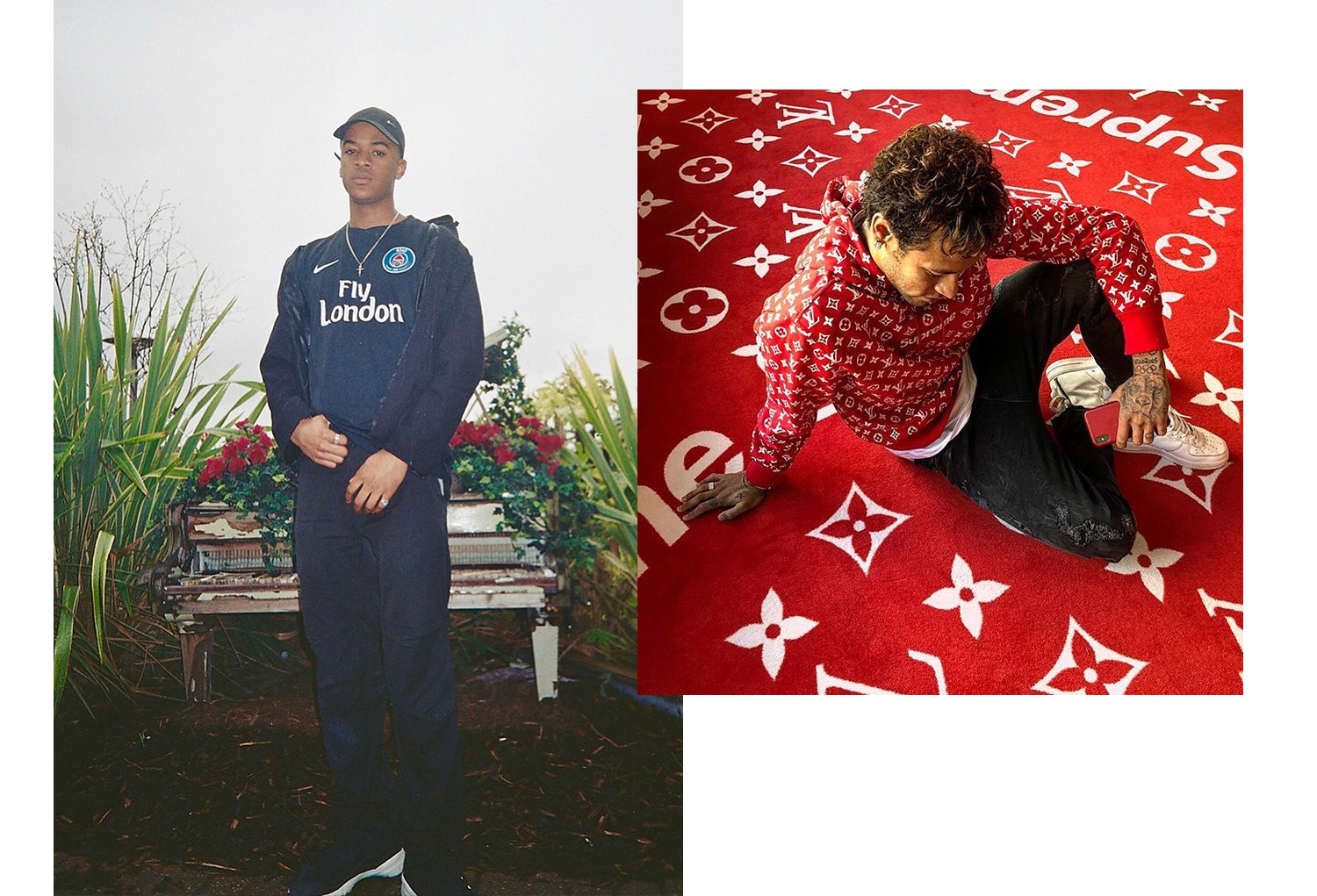 This will only continue to progress going forward. Just like they did with Mbappé, PSG will continue to buy or bring through talent that fit this model. Next up is USMNT star Timothy Weah – son of former Ballon D’or winner George – who already looks like he’s destined to front Swoosh campaigns in years to come, increasing PSG’s ‘hypespan’ as it bloods into up-and-comers as well as established elite talent.

On a more grass-roots level, PSG shirts still retain a strong level of street acceptance from Berlin to Brixton to Bondy. The jerseys are year-on-year some of the cleanest shirts in existence, increasingly representing aspiration, success and “swag”. They’re also a common feature in rap videos around Europe in recent years, from AJ Tracey and Dave’s “Thiago Silva” back in 2016 through to JXSE’s smash hit “Mbappé” in 2018 – the shirts are a constant feature in the culture.

As Larry Miller, Jordan Brand President, told us at the launch of the debut PSG x Jordan collection: “This is a club that lives in that intersection of performance and style – and that’s a space that Jordan has owned for many years.”

“PSG shirts are sported by everyone from 6ix9ine to Kendall and Kylie Jenner – the kits are seen by hundreds of millions.”

The PSG shirt design has also become the template for countless designers in recent years, reworked by underground menswear labels such as UK streetwear start-up Road140 through to finding its place on catwalks via Parisian label KOCHÉ’s SS18 range.

At the top of the pop culture scale, PSG shirts are sported by everyone from 6ix9ine to Kendall and Kylie Jenner – ensuring the kit is given new echelons of clout, and regularly seen by hundreds of millions of people from all sorts of backgrounds and interests. Essentially, both online and off it, PSG as a brand is absolutely everywhere – it’s a genuinely impressive feat from a club founded in 1970. 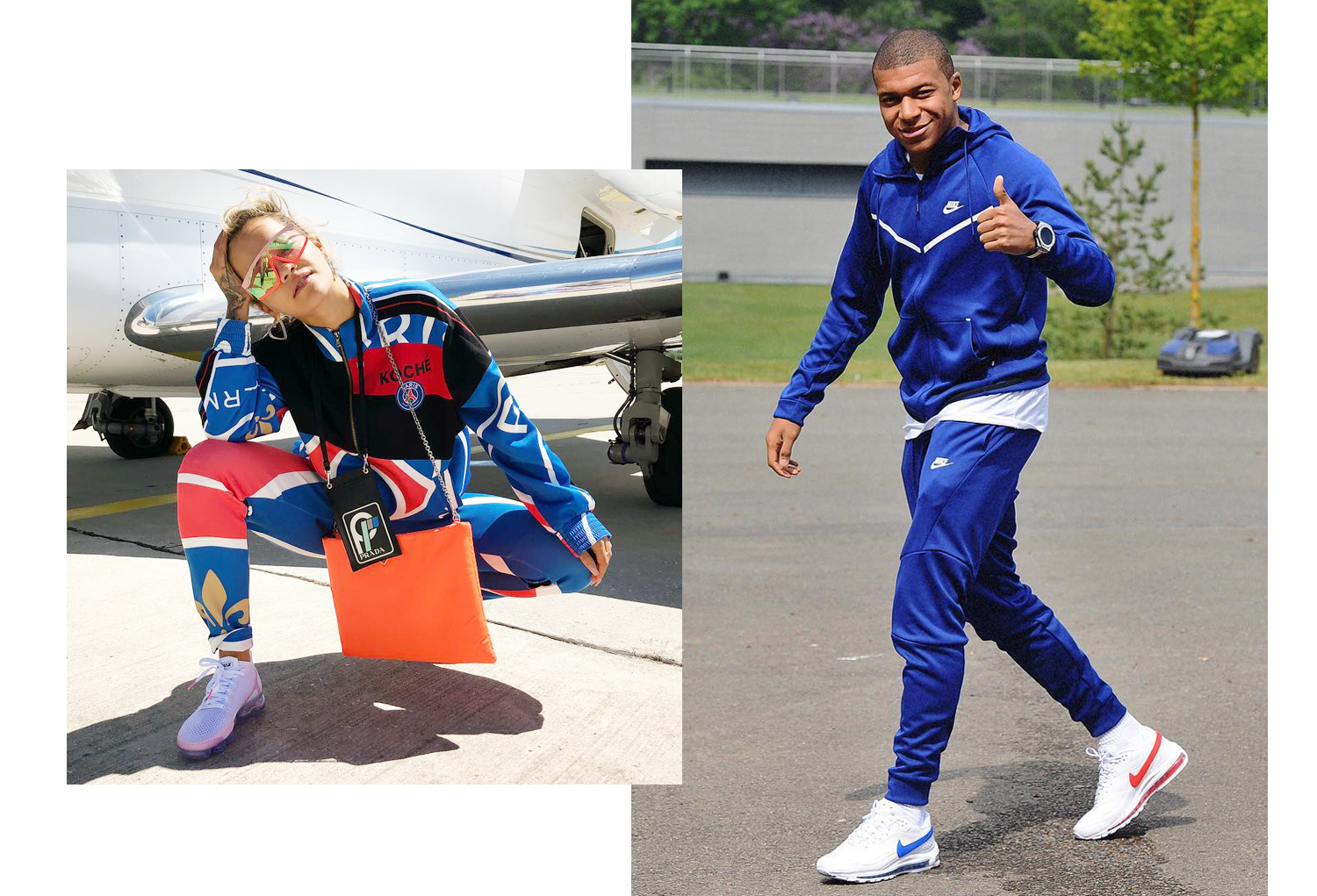 In recent years, PSG have launched limited-edition Nikes, as well as collaborations with renowned Parisian boutique store Colette and the ubiquitous Beats by Dre for a pair of headphones. Now that PSG have launched the world’s first-ever football collection with Jordan Brand, the club’s cultural cache is unprecedented in terms of it’s street appeal.

While gammons will still seethe at seeing Neymar and Mbappé destroying defences while wearing a Jumpman on their chest, the success of this collection will come as no surprise for a club and city whose genetic makeup has been leading us towards this moment.

This collection is a clear indication of both Nike and PSG’s efforts to position the team as streetwear’s go-to club – and with Miller saying there’s a “possibility” that Jordan may collaborate with other clubs in the future, the Parisians may not be the last.