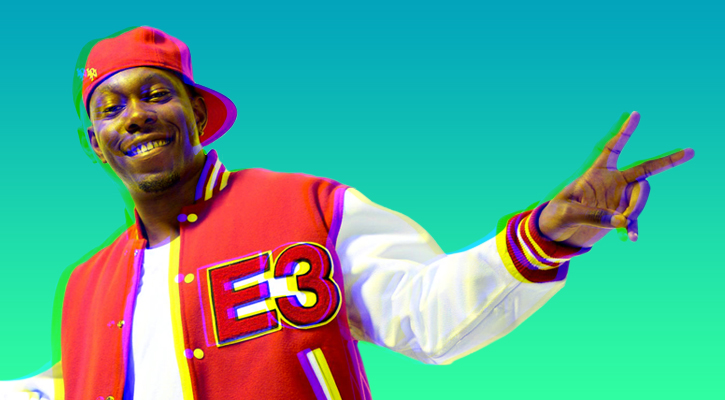 What’s left to say about grime’s prodigal son? Dizzee Rascal’s career has been a whirlwind of hype, praise, expectation, violence and melodrama.

Back in ’03, grime’s original breakout star was such a unique and irresistible talent that his youthful ascent out of Bow’s estates was always going to be a giddily accelerated one.

‘Boy In Da Corner’ was the album that propelled Dizzee to stardom and, for many, it remains his greatest statement, which really isn’t a slight on the rest of his output, it was that good. In fact, ‘Boy In Da Corner’ was so next level when it dropped, it still sounds cutting edge nearly 15 years later.

Trust that we’re not trying to be clever by including a basically unreleased track (it snuck out online in 2012, on the ‘Dirtee TV: Vol. 2’ mixtape), “We Ain’t Havin It” is on this list cos it’s a certified banger, and luckily pretty much everything’s on YouTube these days. Recorded in 2002, “We Ain’t Havin It” captures Dizzee and Wiley on mischievous, lyrically incendiary form over a sick old school beat. It’s enough to make you nostalgic.

It would be churlish to deny the appeal of this Calvin Harris linkup. For some it might represent the height of Dizzee’s pop sell-out phase – it’s certainly a long way from the abrasive urban alienation of ‘Boy In Da Corner’ – but “Dance Wiv Me” gave Dizzee his first number one without completely sacrificing his credibility. In fact, listen again and it’s an appealing, unabashed party tune that takes full advantage of Dizzee’s surprisingly easy charm and Calvin Harris’ pre-EDM knack for likeable dancefloor populism.

A largely forgotten slice of grime futurism from 2004, Win remains unreleased but showcases Dizzee in wistful form over a tough but melancholic instrumental. Flowdan and Breeze contribute strong bars, making this a must-listen for Roll Deep fans.

“I’m a problem for Anthony Blair” is undoubtedly among the more amusing throwback lyrics from “Hold Ya Mouf”, a brisk, pared-down ‘Boy In Da Corner’ highlight that condenses the essence of that album into a lean, punchy 2 minutes and 55 seconds. As that line implies, Dizzee’s in aggravated outsider mode, twitching with agitation and promising retribution. The gunshot laced production is suitably sparse and menacing.

A bit of a rarity maybe but this 2004 collab with Durrty Goodz, one of the UK’s hottest MCs at the time, might just be among the era’s strongest grime productions, complete with bass bin bothering low end rumble, hard as nails beats and vicious, whip-sharp bars from Raskit.

Picking out tracks from ‘Boy In Da Corner’ isn’t easy. Dizzee’s debut is brim-full of urgent, angrily emotive missives from the estates of East London, but “Jezebel” stands out as a memorably potent slice of street realism that still hits a nerve 15 years later. A large part of what made Boy In Da Corner so electric was aesthetic – it served up tough home-grown grime sounds to the masses with added bite – but Dizzee’s storytelling skills were every bit as important. Jezebel is an honest, difficult and, ultimately, blunt observation of a young woman’s plight. It still sounds poignant today.

Dizzee Rascal’s apparent reluctance to look back has consistently frustrated those who desperately crave his return to a hastily vacated grime throne. Dizzee went clear long ago and grime politics has no doubt provided plenty of reasons to keep the scene that birthed him at arm’s length. In some ways, this year’s ‘Raskit’ album feels like a long overdue return to the raw urgency of early Dizzee, but it still betrays his reluctance to do a ‘Boy In Da Corner’ redux. “Space”, the lead single, is a tough, lyrically virtuosic reminder of everything that made him grime’s golden boy, but the tone is more world weary and there’s a palpable sense that this really ain’t an exercise in nostalgia.

When it dropped in 2014 “Pagans” was an effortless reminder of just how seriously we all need to take Dizzee Rascal. Yeah sure, he’d dabbled in some mainstream pop and made bank, but writing Raskit off as some sort of sell-out who forgot what made him great in the first place would be a mistake. Pagans might be more trap than grime but Dizzee’s flow conjures up the old magic.

Dizzee’s sweet as a nut second single was the perfect right cross KO after a dizzying set up jab from “I Luv U”. Well and truly propelling grime’s golden boy into the limelight, “Fix Up, Look Sharp” – built on a brutish drum sample from Canadian rocker Billy Squier’s “The Big Beat” – demanded the world’s attention with whip-smart fighting talk over stadium rock beats and aggressively stark production.

Time, and his own wilful distancing from the genre, may have diminished Dizzee’s standing as grime’s greatest MC but reintroduce yourself to “I Luv U”, his debut single, and the singular brilliance of Raskit hits you afresh. Few rappers – and we don’t limit this to the UK – have announced their arrival on the scene with such confidence. Dizzee broke out of the underground first time of asking with this raw account of teenage pregnancy, and, truth be told, he’s barely looked back since.