Viv represents everything Arsenal Women stand for: an unwavering determination to be the very best. The history of women’s football in England is Arsenal Women, and Viv is putting that legacy on her back week in, week out.

This weekend, in the season opener against Chelsea, she'll be able to showcase her prowess at one of the world’s most iconic stadiums. Talent this big deserves the biggest of stages.

One of the game’s finest is also one of the most humble. Breaking records for both club and country are “nice” for the No.9 – her words, not ours – but it’s all about what she can do for the teams she represents that matter most to the Flying Dutchwoman. 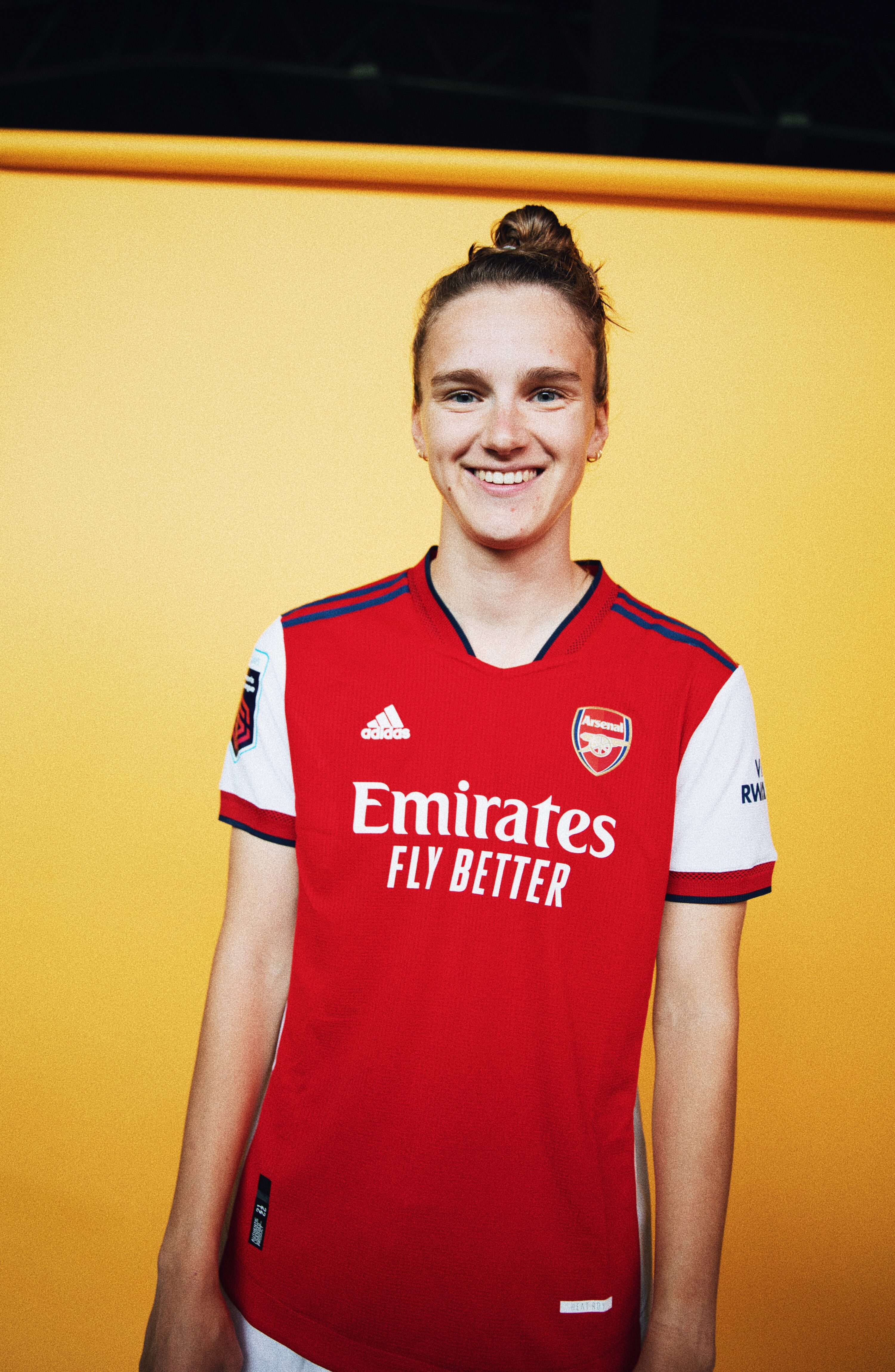 Vivianne Miedema: To stay fit! I think after last summer, I’ve only had five days off and it doesn’t really feel like the right time to expect much. So right now, my focus is definitely trying to make sure that I stay as fit as possible, and to be there as much I can be for the team. We’ll take it from there!

You’ve been at Arsenal for a few years now and the fans absolutely adore you. You’re talismanic. What does being an Arsenal player mean to you?

I think like you’ve just said, it’s going to be my fifth season with Arsenal and I can’t wait to have everyone back in the stadium to kick it off. That’s something we’ve obviously missed big time!

I like to be one of those players that carries the team, I like to have that responsibility. I also like to have the fans watching me do that, I’ll never shy away from that.

Speaking of players. someone I wanted to talk about, someone who I know you get on really well with off the pitch is Mana Iwabuchi, or Buchi as you affectionately refer to them! What do you think Mana can bring to the team?

I’ve always said from the moment we came together at Bayern Munich that she’s an unbelievable player.

Buchi sees things that no one else does. And for me, to share the connection we share on the pitch is quite rare. I’ve definitely got that with her, and I think you’ve been able to see that already in our first two Champions League games. We just seem to find one another!

We are obviously mates off the pitch as well, and that just makes it amazing to have her onboard at Arsenal. I think she is going to do really well for us this season. 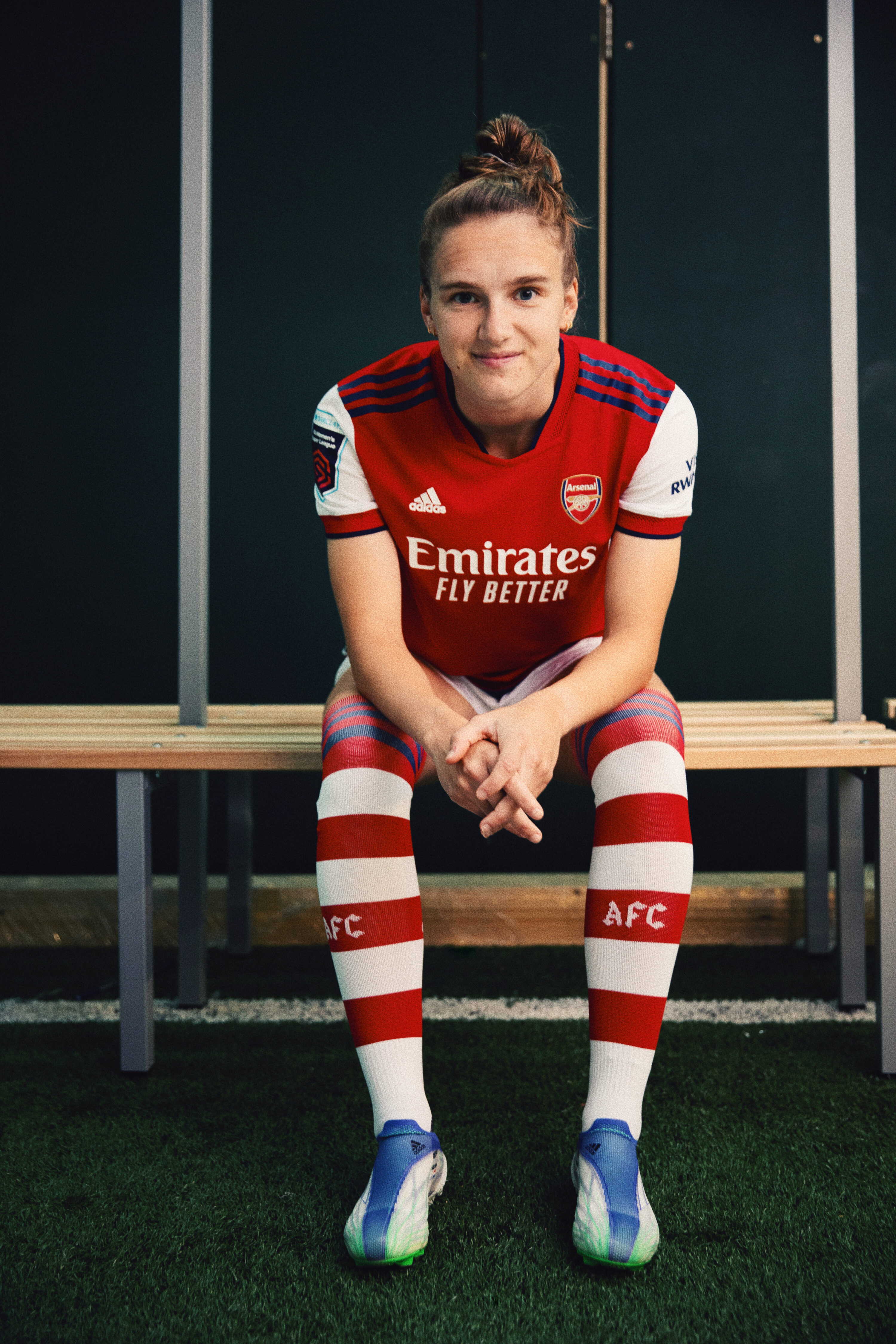 “What you see, is what you get. In the world of sport, people can struggle with that.”

You’re already making history by playing at the Emirates twice this season. What does it feel like to play at a ground like that?

I’ve not had the chance to play at the Emirates yet! The friendlies we’ve had there, I wasn’t available to play in those games, so I am really excited to finally play at the stadium.

The most important thing for us is having the fans back again, that’s something we have all been really looking forward to. We can’t wait to have them cheer us on again, and it is going to be so special to have them at the Emirates especially as both of the games we will be playing there are London derbies – Chelsea and Spurs.

One of the reasons I am such a big Vivianne Miedema fan is because you are so unapologetically yourself. I remember seeing a clip where a Dutch reporter asked if your partner was “a bad boy or ideal son-in-law”. Your response: “no…they’re an ideal daughter-in-law though”. I found that really powerful! Why is being yourself so important to you as a person and a player?

That’s how I’ve always chosen to live my life. What you see, is what you get.

Sometimes, especially in the world of sport, people can struggle with that. But it’s all out in the open for me. I am me, and I am not going to change who I am. I just prefer to be open and transparent with everyone and that comes back to who I am off the pitch, and who I am on it.

I was a bit surprised with that question ‘in the moment’ to be honest, but I will never lie about things and I can’t really pick who I love, so…that’s just how it is!

I think with Jonas (Eidevall) coming in as well as a couple of new girls, I think it is going to be an exciting year for us!

We’d been with Joe (Montemurro) for about three and a half years, and I think we needed something fresh as a club. Not to take away from what Joe has done for Arsenal, because obviously that’s been unreal! But coming into this season with everyone having a fresh mindset is what everyone really needed in my opinion. That’s definitely my mindset right now. Let’s just go for it, and see where we end up! We have the will to move forward, and to try different things. I’m really looking forward to seeing what happens this season. 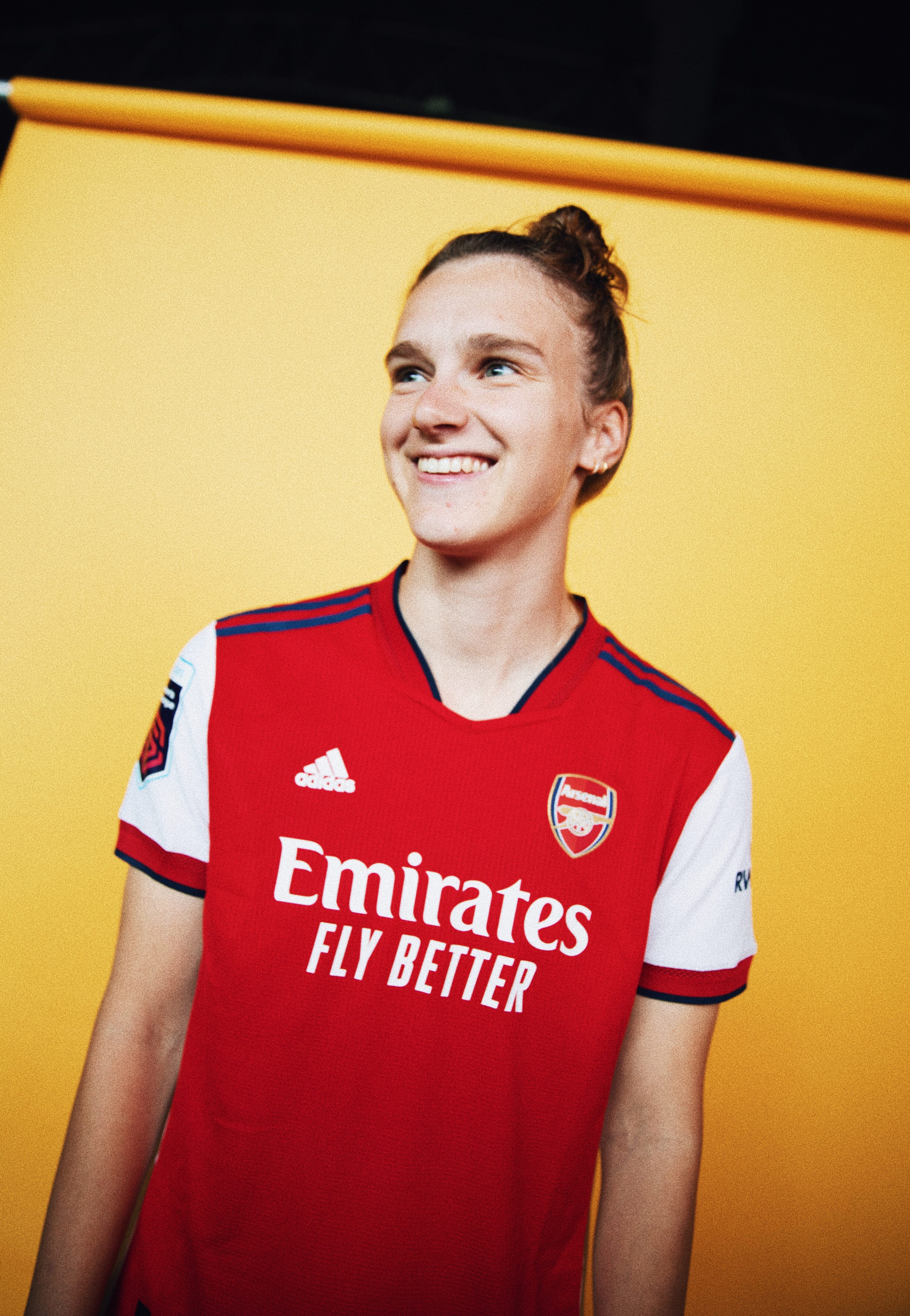 “I hope that one day someone comes along and breaks all of the records I’ve now set.”

I am feeling very old!

I think I’ve just been around for a long time already to be honest.

Like I said earlier, it’s my fifth season with Arsenal. I’ve played with my national team for the last nine years. This season is my 11th season at the highest level. And in some sense, it feels like it has gone quite quickly because of all the experiences I’ve had over the years. A couple of records were broken too…

Just a couple. Nothing too major, just a couple of minor records broken…

I mean…they are there to be broken! So, I hope that one day someone comes along and breaks all of the ones I’ve now set. I’ve still got a couple of more years left in me, so we’ll see what happens.

But to be an Arsenal legend at 25 and to be put in the same camp as Rachel Yankey and Kelly Smith. When people say things like that to you, what do you think?

To be honest, I think it’s an honour obviously. For me, as a player, I’ve got respect for ‘the greats’ that have come before me and to be put in the same bracket as them is really nice, but I never look at myself that way. I just look at myself as an Arsenal player. I need to do the best that I can do for the club as long as I’ve got the jersey on, that’s all I care about.

I want to achieve more great things with the club and that means winning prizes with the team. Right now, I am just focusing on how good I can be! And whatever people decide to call me, of course that’s nice, but I try not to bother myself with that.

Is it true you didn’t know what GOAT stood for, and genuinely thought people were calling you a goat?

I’m Dutch! How am I supposed to know these things! To be fair, I looked on Twitter because I saw that people had been tagging me in pictures with goats and I thought: “it’s not really that nice for people to be calling me a goat!” So I asked Lisa (Evans) what people meant by it…

I wanted to ask you, who was the person that ‘saved you’ and eventually told you it stood for ‘Greatest Of All Time’?

It was Lisa! So, after she told me what it stood for, at least I then understood the context of it!

It was literally during one of ‘these’ media days when she told me as well. People kept saying it to me and I kept thinking to myself: “this is so strange. Why do people keep saying this to me?” It was one of those things where I didn’t want to ask people what it meant, because I thought everyone knew and I didn’t! But eventually Lisa told me, and I felt much better about it. 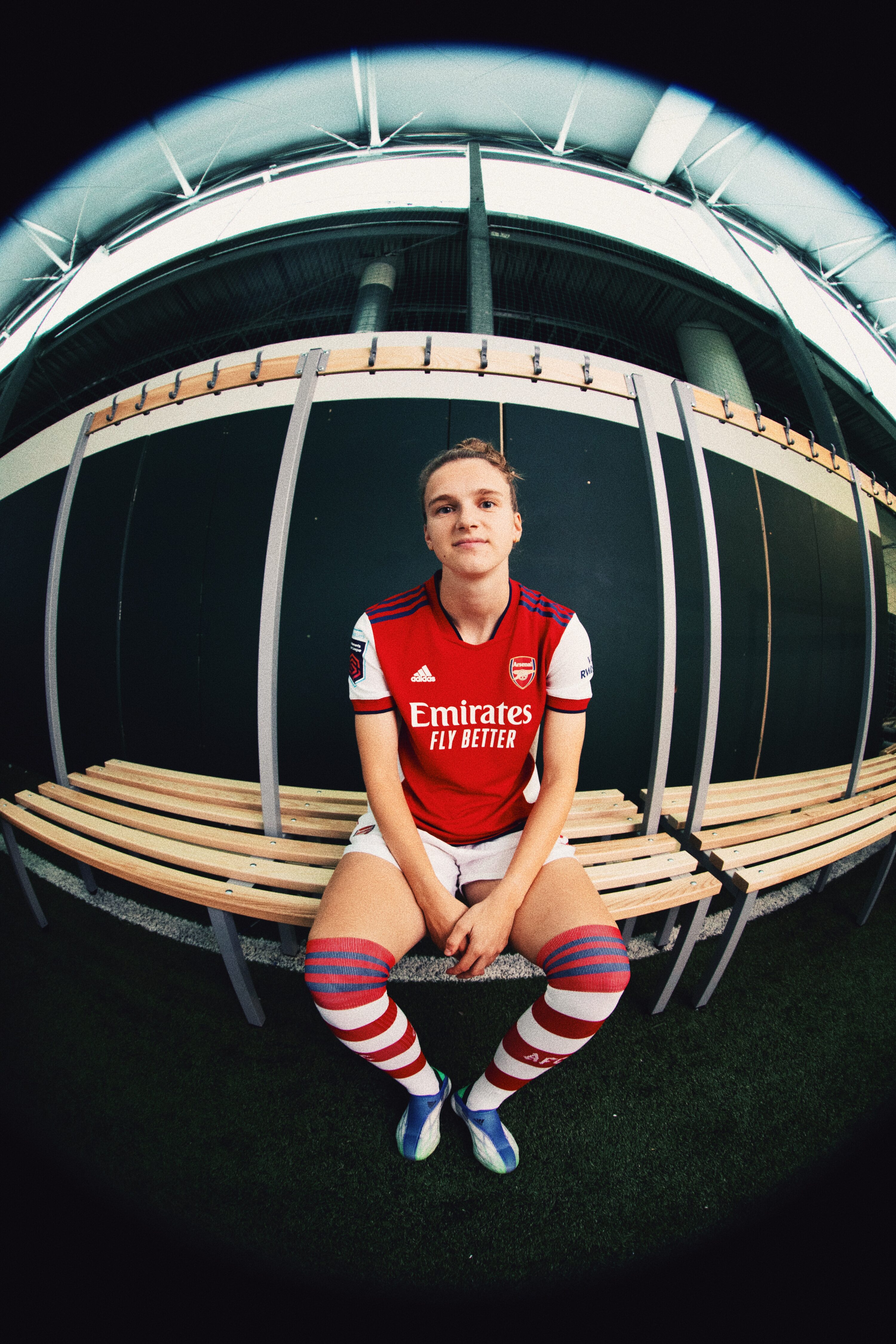 “It will be great to reach 100 goals in front of fans. I’m looking forward to making that happen.”

You can rest assured nobody was calling you a farm animal…

Well this is the thing! I thought people just knew I was from a farming area in Holland, so I made that connection. I’m happy it wasn’t that!

A lot of people are talking about when you’ll score your 100th Arsenal goal, do you ever think about milestones like that at all?

The way I work is, I remember every single game I’ve played in…which can be quite annoying because I’ve played in so many now! But that does mean that you are aware of what’s going on, and what people are saying or expecting of you. Like, when I broke the record for the Dutch national team, people were speaking about that for such a long time! But, somewhere along the line you just start looking from game to game and everything that comes with that is nice in that ‘moment’, but you don’t have time to sit and think about it properly.

With the Olympics for example, there were a lot of highs and lows in that tournament, but then I returned here and I’ve only had five days off…there isn’t time to process it all. Which can be quite hard sometimes because you just continue to be in that cycle, so you don’t really have to take it all in until you have a break.

It will be great to reach that point in front of fans. So, I am really looking forward to making that happen.