England are European Champions. A phrase so many have wanted to shout over the years but so few have whispered aloud for fear of it never coming true. Yet those fears are now dead and buried courtesy of Sarina Wiegman and her Lionesses. A team who lifted the UEFA Women's European Championship trophy for the first time in history on July 31, officially making them one of the best England sides ever.

From the very first minute to the final whistle, the Lionesses had Wembley erupting with noise as fans watched them beat Germany 2-1 in ET. If ever there was a full-circle moment in football, it was this game. The last time an England side beat their biggest rivals in a Wembley final was back in 1966, a time when women weren't even allowed to play the ‘beautiful game.’ Fast-forward 56 years, the FA’s infamous ban is now nothing but a stark reminder of how far the game has come. Captain Leah Williamson and her teammates will be the first to say they stand on the shoulders of giants, but their historic win has catapulted the women’s game into an age fans have been pushing for relentlessly season after season. An age where women’s football is simply seen, and respected as, football.

Growing up, I rarely – if ever – saw a women’s match on television. There were countless moments I missed out on at both club and international level because the women’s game wasn’t given the coverage it’s always deserved. But the relief I now feel knowing never again will a young person have sporting moments ‘hidden’ from them is immeasurable. This England team, and this summer’s Euros, have demonstrated the power of accessibility.

The Lionesses’ historic win was watched by a peak BBC One TV audience of 17.4 million, making it not only the most-watched women’s football game on television but also the most-watched programme in the UK this year. A further 5.9 million streams smashed viewing figures through the ceiling – one that for such a long time, was made of glass. But now, the sky really is the limit for these players and the game moving forward. After years of fighting for women’s football matches to be put in front of a wider audience, we’ve finally seen what can happen if you build a stage. Not only will fans come but they’ll turn up in their thousands. 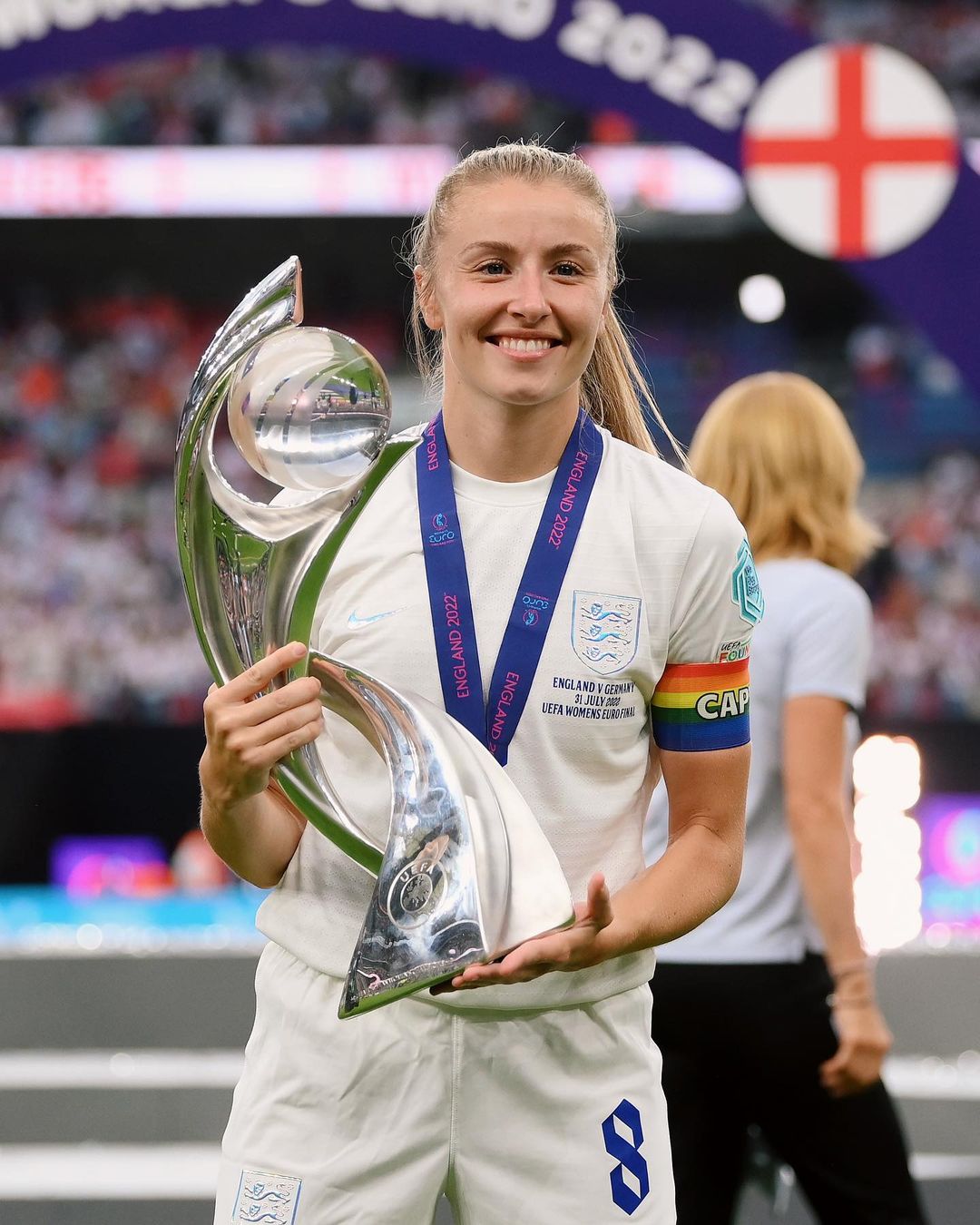 “They’ve reminded everyone that football doesn’t belong to one group of people. It belongs to everyone.”

A record crowd of 87,192 packed out Wembley Stadium to see Ella Toone and Chloe Kelly reign supreme. The Queen might have given them their plaudits, but perhaps the biggest seal of approval was knowing over 500,000 fans across 31 games showed up during the Euros. More than double 2017’s record of 240,055. The ‘who cares’ brigade have finally been silenced. You want to know who cares about women’s football? Just look around. 53% of fans who showed up last month were men. A demographic that for so long refused to engage with and support the women’s game. Georgia Stanway’s “sorry lads it’s sold out” comment – in response to England men’s players asking for finals tickets – was more than an anecdote, it was a sign of the times. The tide is changing, and it’s now time for people to decide: are they going to ride the wave that is women’s football or be left in the shallows?

Jill Scott, Nikita Parris, Ellen White, Alessia Russo are more than athletes. They’re pioneers for change. Whether they take on that mantle consciously or not, they’re creating a better future for women both on and off the pitch. Their achievements and behaviours haven’t only inspired a generation of young people to pick up a pair of football boots and follow in their footsteps, they’ve reminded everyone that football doesn’t belong to one group of people. It belongs to everyone. And the biggest post-Euros’ legacy this England side can create, is one whereby people can’t imagine the game without the likes of Wiegman and her European Champions. And that’s happening, right in front of our eyes.

From my dad-in-law excitedly telling me how much of a baller he thought Lauren Hemp was, to my nan asking what it was like to watch England play at Old Trafford, those who paid little to no attention to women’s football before July 6 haven’t been able to think or speak about anything else since. 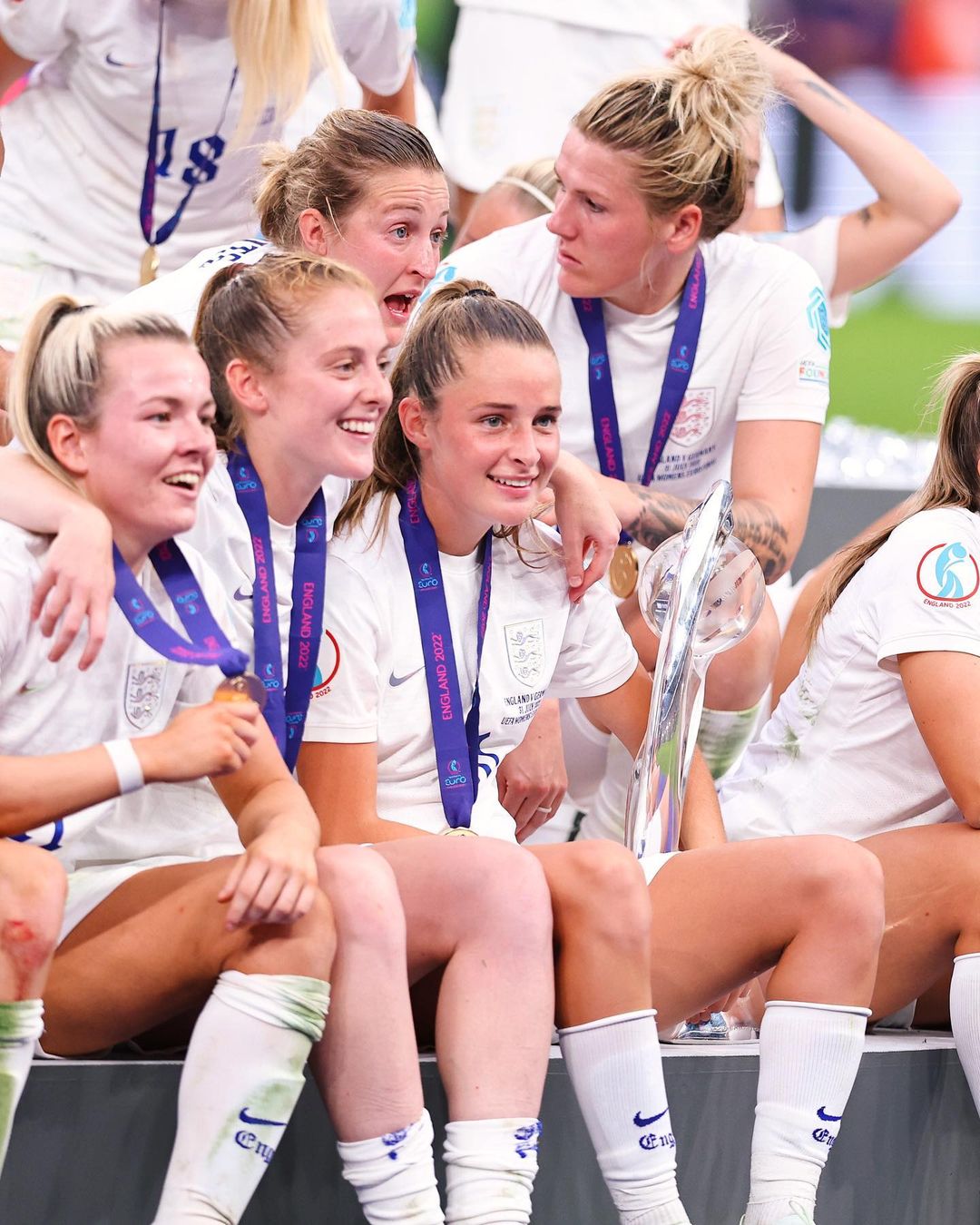 “Football is our national sport and it seems we’ve finally learnt to celebrate its successes regardless of who’s succeeding: men or women.”

My timelines are filled with women’s football content from pages I’ve never seen spotlight the game before, and rightly so. This was arguably the biggest tournament in women’s sporting history. The front and back of national papers are splashed with stories of the Lionesses – still a relatively new phenomenon – and if you’ve walked into M&S recently, you would have been met with a cardboard cut-out of Demi Stokes or seen Lucy Bronze on a packet of Doritos. It still brings a smile to my face every time I spot a Pepsi MAX billboard adorned by Williamson. Arms outstretched with a smile on her face, as if to say: “welcome to the party that’s women’s football, better late than never.” For far too long brands have failed to recognise the cultural relevance women in sport bring to the table. And although some might argue it’s ‘style over substance’, at least there’s now universal recognition that these phenomenal athletes hold incredible power – something they’ve been denied of, decades previously.

Football is our national sport and it seems we’ve finally learnt to celebrate its successes regardless of who’s succeeding: men or women. If you wear your nation’s colours with pride and uphold the badge with honour, we’re with you every step of the way. A sentiment thousands of people expressed last month. Seeing the likes of Premier League players Mason Mount, Phil Foden and Harry Kane in the stands, or global superstars like Ed Sheeran wearing a Lionesses’ shirt on stage, contribute to shifting outdated views of women in sport. “Oh…if someone like him watches women’s football, I guess I can too” is likely a thought process quite a few have experienced recently. Behaviour indicative of the collective joy that’s swept up England – and our European counterparts – in a frenzy. And we have this England team especially to thank for it.

While there are still areas of the game that need developing, we can’t deny the sheer brilliance and magnitude of this win. We’ve witnessed history in the making, and are seeing wider society change as result of it. This is the power of football, and the Lionesses have harnessed that power better than anyone in recent years to not only change the face of it, but to also change its core. Football has most definitely come home, and now it’s up to the rest of us to build upon the Lionesses’ legacy and make sure it stays that way.