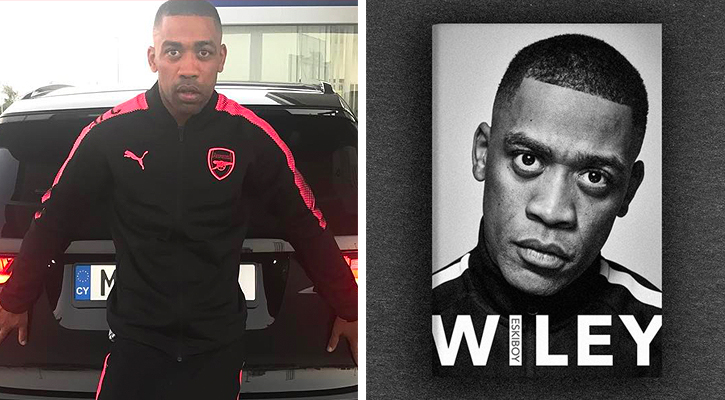 Now approaching two decades as the grime scene’s godfather and central figure, this year Wiley decided to reflect on his journey in autobiography ‘Eskiboy’.

Tottenham Hotspur fan Wiley is known for frequent outbursts and observations on the game but it’s his little known early career, budding aspirations and eventual pessimism that frequently appear throughout ‘Eskiboy’.

Here’s what we learned about Wiley’s love of football when reading ‘Eskiboy’.

Recalling his introduction to supporting Spurs and his early playing days.

I remember school, and playing football. I loved football. I’ve been a Tottenham fan my whole life. I remember being about five or six, at primary school, and I’d made a friend who had a little Tottenham short with ‘Holsten’, in tiny writing across the front. He was the one who got me into it properly, when I was buying my first football boots and that. I used to play as a winger – I knew what to do, scored a few goals and that – and you know what?

Suddenly we had eleven different boys ringing our bell every morning, like, “Is Richard ready to go to school?” At first my nan was angry: “Why do these boys keep coming to our house? Tell them to go away!” But then she must have realised we’d be safe walking in together, so she welcomed them in. We’d be eating breakfast, the boys would arrive, they’d come and wait in the hall, and then when we were done she’d shoo us all out the door.

Wiley’s dad also weighs in on ‘Eskiboy’ with his memories.

Back in the day they all used to play football. This was before the music really took over, when they were about thirteen, fourteen, fifteen, although there was a time when they were doing a bit of both. Anyway, all the boys used to get together and play tournaments in Poplar. Not tournaments as such, but they’d sort themselves into teams. Your crew against my crew. No mixing. Kylea (Wiley) had a good crew. I remember Tinchy in particular was very good. They took it seriously too. I remember going down to watch them once, and they asked if I’d be the referee. So I said OK, walked onto the pitch, a minute later Kylea commits this terrible foul, and he says to me. “Dad, you didn’t see that.” Tried to get me to cheat!

The last time Spurs triumphed in the league, was a good before Wiley was even born so you’d excuse him of reaching his 30’s entirely fed up.

I’m probably the the biggest diehard Spurs fan out of all my friends, but I can’t go to matches no more. I can’t even watch them on the telly. Because I know the team now, and I know what they do. The owners don’t care, because all they need is that top-five finish for the business to flourish. The shirts of the star player will still sell. Tottenham are tight. They don’t spend shit. And even when we did get money for Gareth Bale we wasted it. I’ve got no more faith. I don’t think we’re gonna win the league whilst I’m alive. Coming second, even finishing above Arsenal, isn’t good enough.

And now, it appears he’s given up all hope on Spurs winning the league.

Leicester won the league. And if we were gonna do anything, it should have been that season. Cos now Chelsea are awake, Arsenal are awake, Man City are awake. Everyone’s awake! So even though we come second the season after, we’ve missed our chance. Obviously I’m still Tottenham. I’m still diehard. But there’s something wrong over there – the lack of ambition. The supporters want it more than the actual club. I mean, it’s cool for Harry Kane to get a hat-trick, but where’s that Premier League title?!

In an alternate dimension, Richard Cowie Jnr could be turning out for Tottenham, with an entirely new sound capturing the underground, in his absence. At present, Wiley continues his triumphant resurgence, dropping new single I call The Shots with JME, last week.