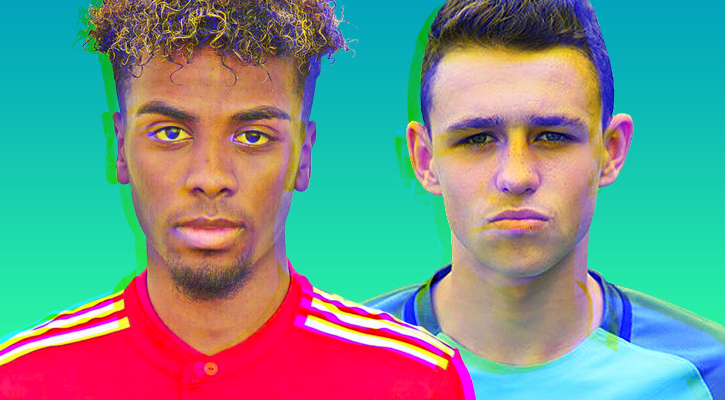 The last two years have seen a flood of young English players make the leap from anonymity to superstardom before they’ve finished their teens.

Breakthrough talents all have exciting back stories. Whether it’s Harry Kane, who defied a series of middling loan spells to become the best striker in the world; Dele Alli, who is fulfilling every bit of his much-lauded potential; or Marcus Rashford, who literally came out of nowhere to be English football’s most exciting prospect.

The truth is, any young player could blow up. Often it’s about being in the right place at the right time and seizing an opportunity when it’s in front of you. And there’s no better opportunity to make a name for yourself than under the bright lights of the Premier League.

We’ve tracked down one young player from each Premier League team who has the ability to blow up and make a huge impact over the coming season.

Incredible experience to make my home first team debut! Happy to top it off with a win and assist #COYG #AFC

After explosive pre-season performances in the Emirates Cup – combined with Arsene Wenger’s commitment to developing young talent – the 17 year-old forward could well be taking the world by storm in the near future. Wenger already says he’s near the first team and with Arsenal always due an injury crisis, his time to shine could come sooner rather than later.

After a disappointing first season with the Cherries following a big money move from Leeds, Cook will be looking to back up the hype and be a more consistent presence in the Bournemouth side. Cook has bags of potential and captained the England U20 team to glory in the U20 World Cup this summer, becoming the first England skipper to lift a trophy since Bobby Moore in 1966.

Less than a week to go ⚽️

Solly March is the player that scored the goal to secured Brighton’s promotion to the Premier League and he achieved it after being ruled out for 11 months with a cruciate ligament injury. A silky winger, March has plenty of tricks in his bag and towards the end of their promotion season he started to form a formidable partnership with the man on the opposite flank, Anthony Knockhaert.

With Burnley selling Andre Gray to Watford, they’re going to be looking for one of their young forwards to make a statement. Enter Dan Agyei. After impressing in a couple of lower league loan spells, Agyei has started to make Premier League cameos. Being six foot tall and possessing rapid pace, he certainly has the physical tools to succeed at the highest level.

This young Belgian has so far managed to survive the annual export of Chelsea’s best young talents to lower league clubs on loan for the season – and he’s even been given a squad number – so expect to see Musonda make waves at Stamford Bridge this season. The pacey wide player had an impressive season on loan at Real Betis in 2016/16, playing 24 games and scoring one goal.

After a scintillating season at youth level, it’s little wonder that all of the Premier League’s big guns are sniffing around Kian Flanagan. He’s been playing U21’s football since he’s been 15 and last season was named Palace’s Scholar of the Year. Creatively aware beyond his years, he possesses a natural instinct for passing and movement and could be Palace’s best prospect since Wilfried Zaha.

More experienced than many on this list but Mason Holgate still has a lot of room for improvement. A solid, steady head given his age, Everton have also shown a great deal of confidence in him thus far and he hasn’t looked out of his depth against the Premier League’s lethal attacks.

Having recently put pen to paper on a new deal to fend off interest from bigger clubs, Huddersfield feel that the 21 year-old Dane is going to be a key contributor for them in the coming years. More experienced than most on this list but he Billing still doesn’t have 50 pro appearances under his belt and the 6ft 6in giant looks set for a breakout season at the heart of Huddersfield’s midfield.

Happy to make my debut last Wednesday against #lutontownfc. But I'm over the moon for making the starting XI and playing a full 90mins against #mkdonsfc yesterday!!?⚽️

The Godson of former Leicester and Liverpool striker Emile Heskey, Darnell Johnson was a key member of England’s U19 side that won the European Championship this summer. A tall but lean centre back who loves tackling, he is a key member of Leicester’s Under 23 side and is basically an injury away from letting the country know just how good he is.

With Nathaniel Clyne sidelined for the opening of the season, the teenage right back is perfectly poised to make a statement and prove to Liverpool fans that he can be their long-term right back. Quick, strong and comfortable on the ball, he has so far not looked out of his depth at senior level.

The talk of pre-season, Phil Foden suddenly popped up on everybody’s radar after a ‘Man of the Match’ performance against Manchester United where he outplayed Paul Pogba. Pep Guardiola doesn’t have enough positive words for his midfielder and he knows a thing or two about talented youngsters.

Just 16-years-old when he made his Premier League debut on the last day of the season in May, the world is expected of Angel Gomes with many comparing him to United legend Ryan Giggs. But having scored 12 goals in 19 games at Academy level last season, it suggests he’s a little more goal hungry than the Welsh legend. Even though Jose Mourinho has a patchy record when it comes to playing youngsters, Gomes certainly looks like he has the talent to woo his way into his manager’s first team plans permanently.

Rafa Benitez has long made it know he’s not been happy with additions to his squad this summer, so Newcastle might need to look to their academy for new additions more than most sides. Having signed a new long-term contract with the club over the summer, NUFC U18s and U23s star Mackenzie Heaney could be an option to bring much-needed pace and creativity to Rafa’s side.

Since a superb display against Everton last season, Josh Sims has been tipped for the very top of the English game and it’s easy to see why. He’s an excellent passer, defensively sound and versatile in his attack play. When given minutes on the pitch he was consistently deadly, offering up opportunity after opportunity to target man Charlie Austin. He seems to be a striker’s dream.

Headlines over the summer suggests this Belgian striker could be world football’s next big thing and one coach has even suggested he’s a “€75m player who could replace Mbappe at Monaco“. That might be a bit hyperbolic but he’s torn up Premier League 2 and has done enough in his five senior appearances for Stoke so far to suggest he’s got talent.

Although strictly a Chelsea player, Abraham is on loan at Swansea for 2017/18 and his progress will be watched excitedly by fans from all over the country following an outstanding season at Bristol in 2016/17. He’ll get precious minutes at Swansea this year and could be their main source of goals. This season could determine just how special Tammy Abraham can really be.

Leapfrogging fellow prospect Shayon Harrison to be training with the Spurs senior team, Mauricio Pocchettino clearly has big things in mind for this 18 year-old forward. With Spurs shy on depth anyway and having failed to add to their squad so far in the transfer window, Sterling is bound to get the chance to show off his goalscoring skills in the Premier League in the not too distant future, having scored on his debut during a pre-season game in Hong Kong.

Good to be back! Day 2✔️✔️ #preseason

It hasn’t quite worked out for Sinclair since his controversial move from Liverpool but the young striker possesses a great amount of talent. With Watford struggling for goals last season, he could well see a chance to impress and replicate his previous U23 form.

Tony Pulis sides aren’t known for their attacking dynamism but Jonathan Leko is a special talent. Making his Premier League debut at 16 and being a fixture on the bench at the end of the season, Pulis has clearly earmarked the winger for big things and as the Baggies always struggle for goals Leko could just prove to be a key difference maker should he be given starts.

Tempted away from Chelsea a year ago with eyes on first team football, the impressive forward could be exactly what Slaven Bilic’s often aimless looking West Ham side need. Direct and thrilling to watch, Quina has more than enough talent to make David Gold eat his ill-informed words about young footballers. It’s hard not to see him becoming a regular starter by the end of the season.