In this new feature, we bring some of the best musicians in the UK back to where it all began and explore how they first fell in love with the beautiful game. Music has always been a huge part of football. In the same way that US hip-hop artists dream of playing in the NFL or NBA, UK MCs and producers have an identical love affair with the sport.

The parallels between sport and music culture has never been stronger. We'll explore this relationship in VERSUS Jerseys, taking artists back to their roots while they rep their colours in some of the game's most iconic fits.

Headie One has been putting in a shift this season. After blessing us with arguably the hardest UK mixtape of 2018 with ‘The One Two’, Headie recently donned a Fellaini-like wig, Gucci headband and sunglasses to sneak into GRM Daily’s Rated Awards, where he watched himself secure his first-ever silverware as an artist while in disguise from afar.

While Headie hails from Tottenham, his trophy cabinet won’t be getting dusty any time soon. Having released unrelenting heat in 2018, Headie's in red-hot form, securing W after W with every track he releases, gaining notoriety despite having to remain low-key at events like that.

He puts his work ethic down to the sporting mentality he had growing up kicking ball, and you can clearly hear that influence in his music. His street anthems “Know Better”, “Golden Boot” and “Tracksuit Love” all include references to the sport which he grew up obsessed with – playing on pitches in Haringey and Stevenage – before an ankle injury saw him shift his focus onto a different game.

Headie’s finesse of the music game is similar to how he surveyed and orchestrated the game from holding midfield back in his playing days, and his continued diligence to drill has seen him break free from that genre categorisation into an artist showcasing Mbappé-level potential on the mic. But whilst it’s finally all fallen into place for him this year, Headie’s definitely not the finished article just yet.

After heading down the road to meet us in Hackney, we secured Headie his boyhood club’s new pink away kit at adidas’ recent Glitch chicken shop takeover, where we spoke with him about going from playing David Beckham Soccer on the PlayStation to scoring point after point with OFB – and becoming one of the UK’s most exciting rappers as a result. 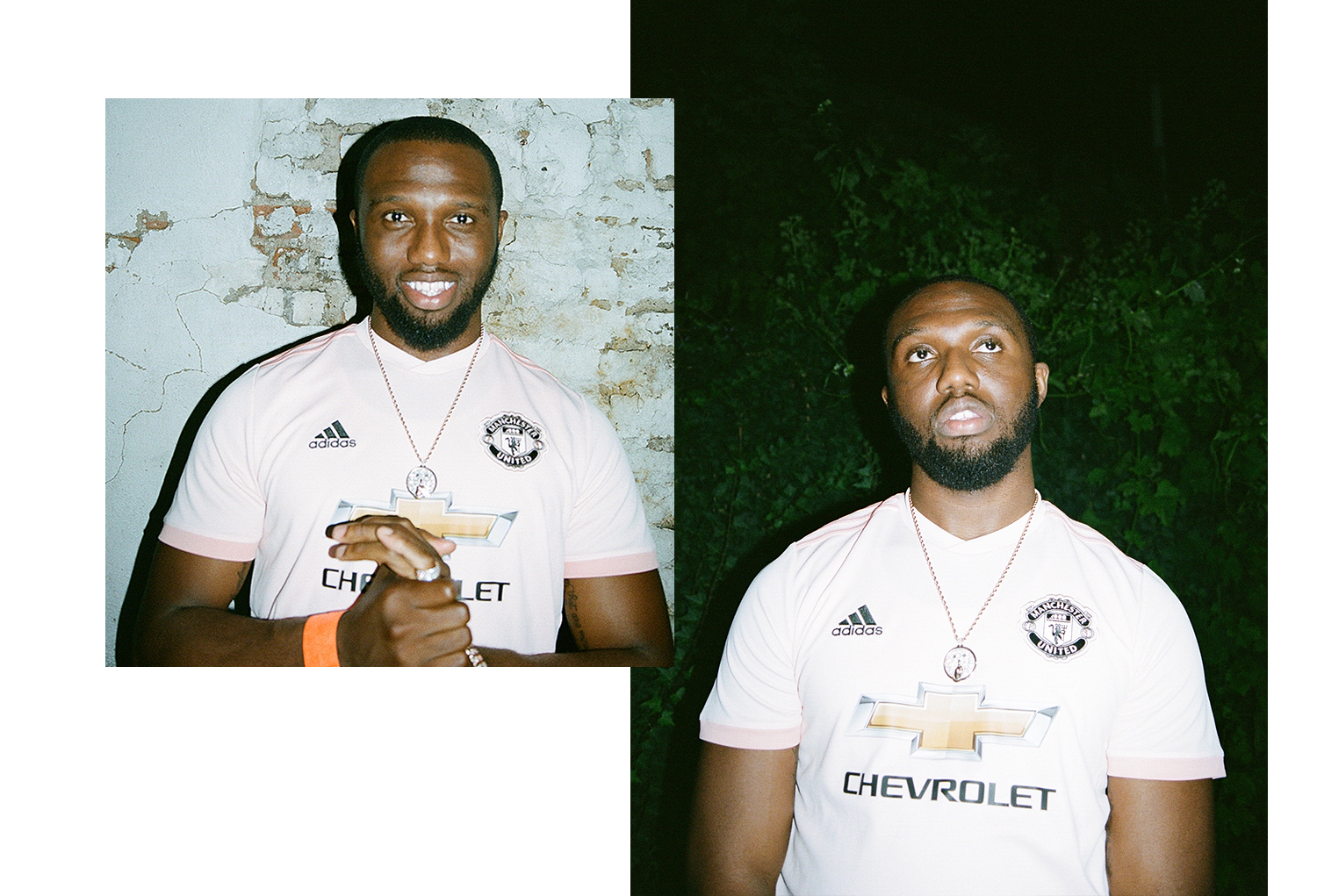 VERSUS: Not everyone will know this, but you were actually doing trials for Stevenage when you were younger. You were obviously a bit of a baller, how did that come about?

And then Stevenage…I was told I was gonna become a trialist, but I ended up hurting my ankle. I got a little fracture and had to stop it there.

What position did you play?

Centre defensive midfield. I like looking up and surveying the game from back there, and seeing what’s in front of me. Just watching it all unfold.

It was the dream being a footballer growing up. But obviously it can’t always go that way, you feel me. Anything that I do I just like to put my mind to it. I pay close attention to it.

There’s a lot of musicians that want to be footballers and vice versa. If you were a footballer who would you be?

That’s a mad question! I’m not the fastest still, so I have to use other means to get around the pitch. I have to think more than other people.

Yeah…but I’m a bit faster than Pirlo (laughs). I’d say like a Zidane, but in a holding role. 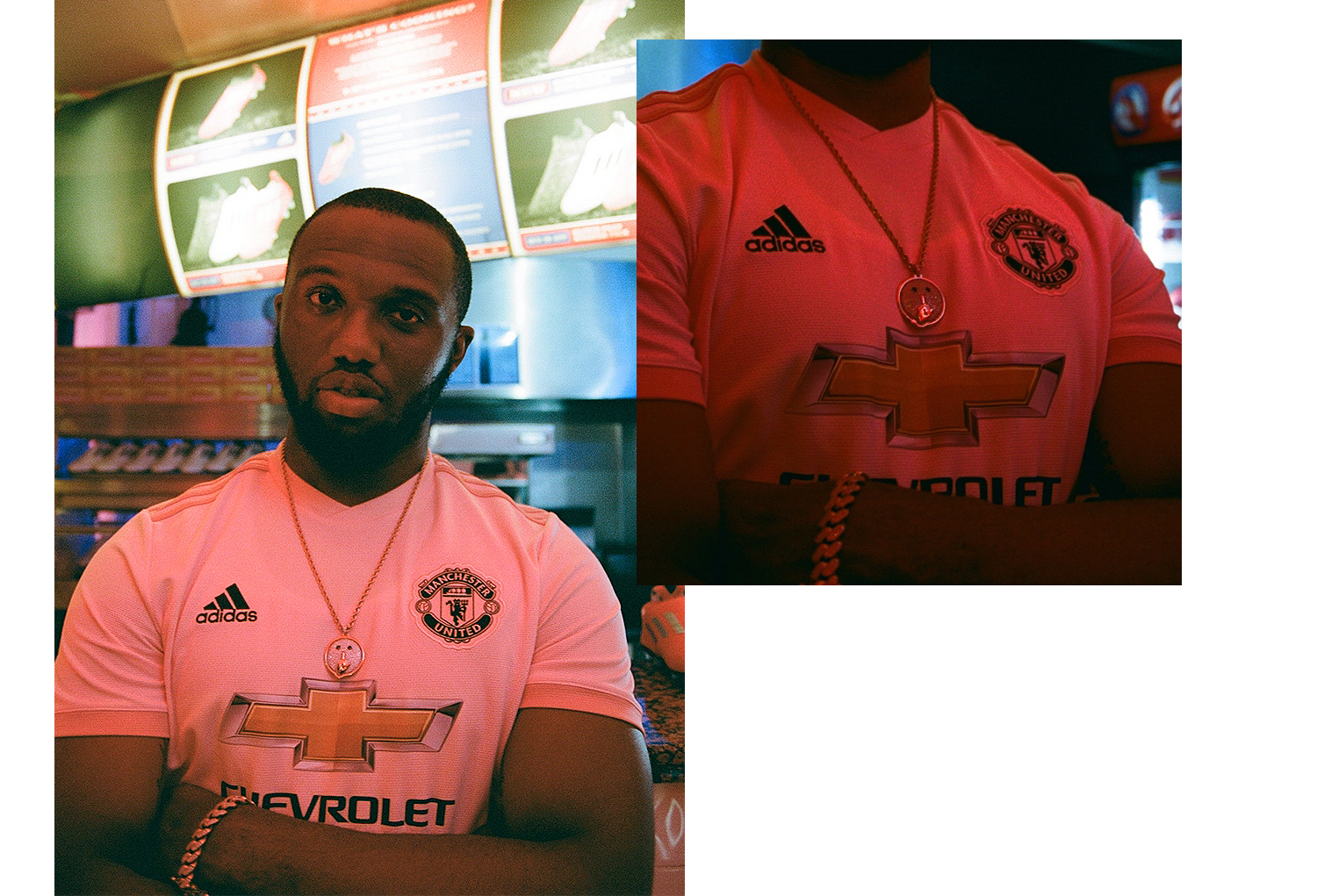 “I know quite a lot about football. I remember the details well, like player numbers, names, everything.”

Do you feel your approach to music derives from your sporting mentality?

I know quite a lot about football. I’ve always been mad into it for as far back as I can remember. I remember the details well, like player numbers, names, everything. Like United coming for trebles in the 90s – I was young back then, but I can still tell you all about it.

What’s your earliest memory as a fan?

Would definitely be growing up playing consoles. Right now I’m a FIFA player, but back then i was an ISS guy on the SNES. Beckham also had one funny football game – David Beckham Soccer – that was cold, still.

When did you first start supporting Man United?

I’ve supported Man United as long as I’ve been into football, since when I was a little kid. My family and my immediate cousins and that all supported United. It was all family, and it sort of just fell into place like that.

What are your thoughts on the new kit?

The pink looks a bit different. I think I can make it work though, still. I do like it though.

United are in a bit of a sticky one at the minute. Not3s was telling me he doesn’t reckon you’ll get top 4 – where do you think you’ll finish?

I think we’ll get top one. If we don’t win the league, we’ll win the Champions League. Confidence is key!

You’ve said your favourite player is Jesse Lingard. Have you ever reached out to him or any of the other United boys? 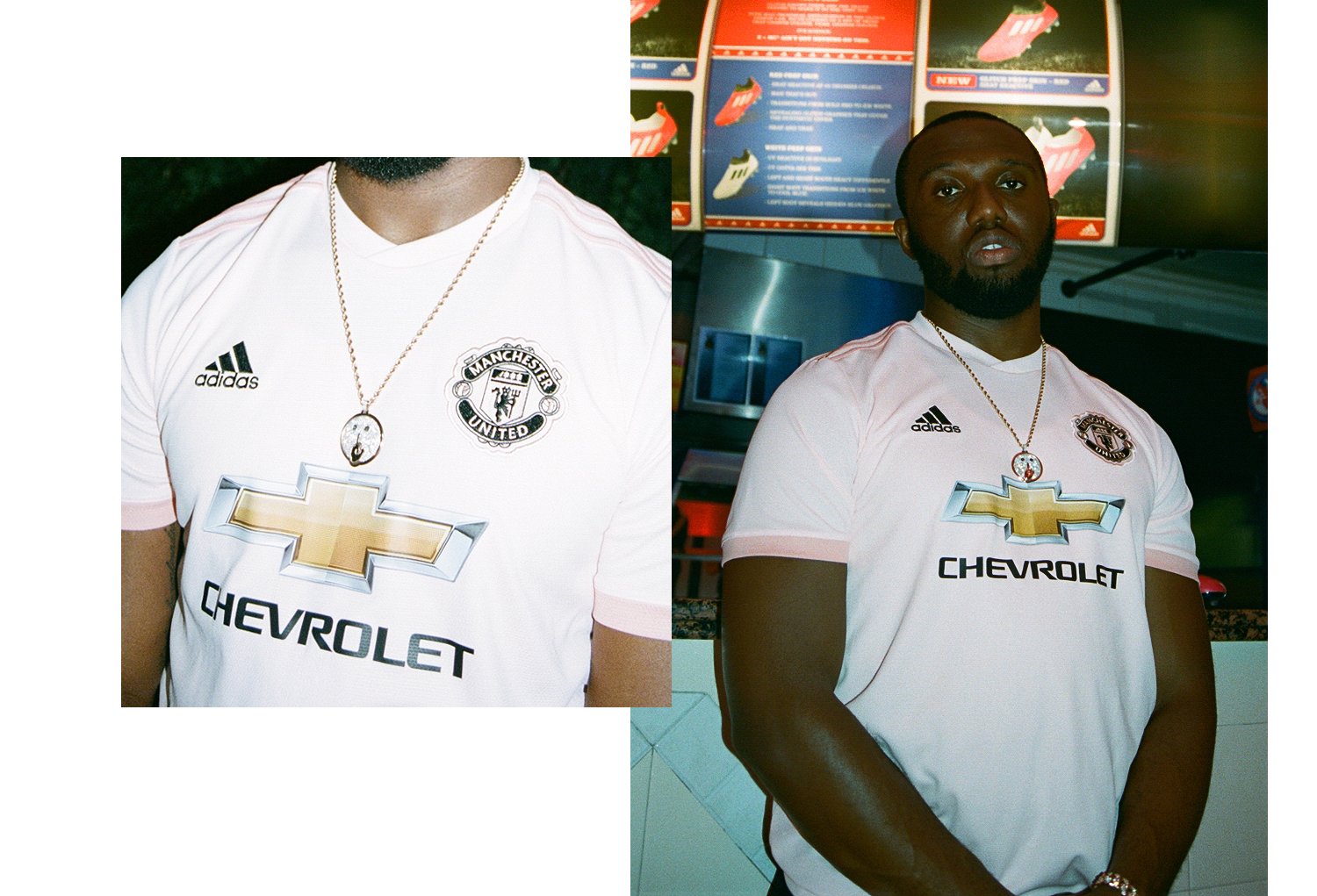 “Everyone’s supporting each other – the musicians are supporting the footballers and vice versa, so hopefully, we can all go far as a collective.”

You’re now renowned for your football-inspired bars. Have you got a favourite?

Cos he was putting in work innit! You have to give credit where it’s due. Last season he just cut through.

What do you think of the football, music and style convergence culture that’s happening at the minute?

I feel like it’s coming together all nicely. It’s all mixing into one, which is a very positive energy. Everyone’s supporting each other – the musicians are supporting the footballers and vice versa, so hopefully, we can all go far as a collective. The culture’s good at the minute.

I’ve seen M Huncho linking up with Gunna recently, who you’ve said is one of your favourite artists. Who would you like to link up with from US Rap at the minute?

Right now…that’s another tough one! I like Gunna’s music still. I like Future’s music, him and Young Scooter and that trap sound put me on to making the style of music I do today.

Have you seen the video of France celebrating with the World Cup with Vegedream? People on Twitter have said they want you to lead the celebrations if England win 2020… would you be up for it?

I’ve seen it, it’s proper good still. It’s a proper positive video to be seeing. If England could do it in 2020…why not? I’d have to make “Golden Boot Part 2” or something.

Do you depend on having a good team around you?

I feel like I have a great team around me. Everyone works hard for the cause, and pushes me to work harder. It’s sort of like my own little football team, a little 5-a-side team getting the best out of me.

Manchester United’s new away shirt is available from adidas.com