Not3s and Manchester United are at different ends of the table when it comes to their form this year. While the club the North Londoner supports is enduring an underwhelming 2018, Not3s has continued to take W after W with ease, keeping the levels as high as United’s sky-blue neighbours.

While his sound blends a combination of afrobeat, grime and breezier elements of UK rap that fuse to make his own distinct brand of pop, Not3s vision is singular: international stardom. He started 2018 with a bang and kept the pressure on ever since, releasing hit after hit on what felt like a weekly basis. His collaboration with Mabel enjoyed mainstream success, he dropped certified heaters with NSG, Avelino, and Malek Berry, and even charted with his good friend AJ Tracey on “Butterflies”, before unleashing another solid project with ‘Take Not3s II’.

As recently as this week, he’s been rewarded by taking the crown as ‘Artist of the Year’ at GRM Daily’s Rated Awards and aside from recognition within his own industry, he’s also making inroads into football culture, too.

From being followed by the likes of Hector Bellerin and Raheem Sterling to forming a blossoming friendship with Jesse Lingard, Not3s has become the artist that’s in the ears of every Premier League player. Just last week, he partnered with adidas and his beloved Man United to launch the club’s ice cold pink away kit, giving him further claim as one of the most influential non-footballers in football.

We caught up with Not3s at the adidas Creator Dock to get his thoughts on whether the new pink shirt can bring back 2015 Pogba, why he wore (and then burned) Arsenal shirts back in the day, and what he’s plotting next as he continues to dominate the game. 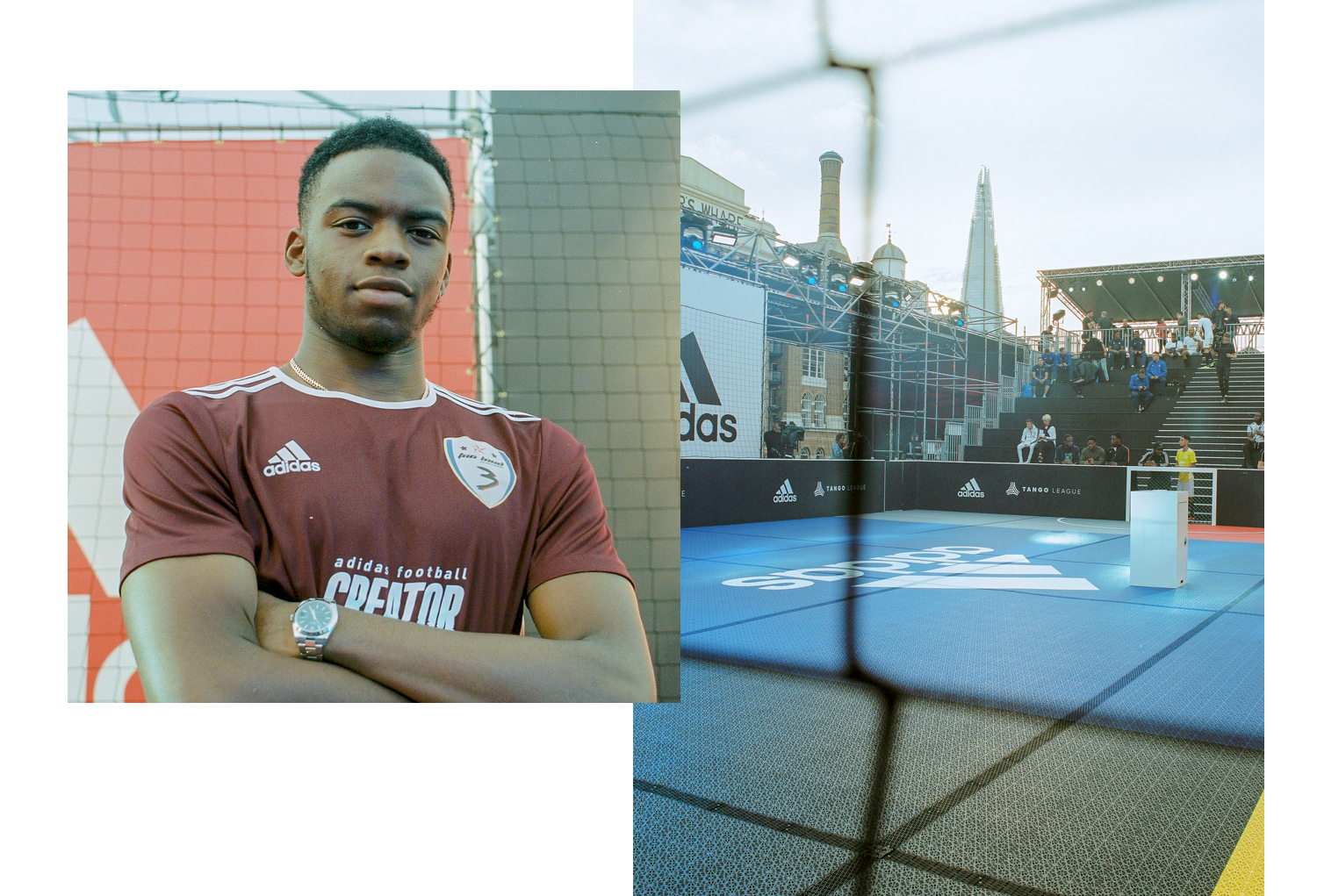 VERSUS: We’re meeting just before you’re about to step out and kick ball in a tournament for adidas. Your bond with the brand is very strong at the minute, what’s it been like working with them?

Not3s: It’s been sick man, it’s been proper great. There’s been a couple of things which they’ve put me on to – for instance I support Manchester United so I just launched the new away kit with them, which was great.

Yeah we’ve seen you modelling the kit, what are your thoughts on it?

I loved doing the launch with United. We were out in Seville for the launch a while back, and since then I’ve just been waiting on it to come out ‘cos it’s so sick!

Do you think this shirt will get the best out of Pogba?

I hope so! Get him on that Juve wave…I have a feeling Pogba isn’t really happy with United right now, but it is what it is. I hope he does though man. The thing is with Pogba is that he can flex, he’s still got this two stars in his hair, so he’s still flexing.

Which adidas player would you sign for United that’s not currently playing for them? Salah, Dybala, or Bale?

That’s tough…but I would take Salah.

Even though he’s a Liverpool player?

Especially when Mourinho starts playing him at left back?

“Me and Lingard are proper cool. He always shows love for my music.”

Did you used to kick ball back in the day?

A tiny bit but it was never like I was gonna be a footballer over being an artist.

When did you first start supporting United?

Since I was young man. What made me support them completely was the game in 2004/05…I remember Patrick Viera playing in it and United ending Arsenal’s unbeaten record. From that point on, I was United.

What are your honest expectations for United this season?

Honestly, I don’t think we’ll do well. I’ll be so honest…after that defeat against Tottenham I’m not gonna big us up too much. Top four for us will be tough now.

Do you talk to any of the United boys?

Yeah, me and Lingard are proper cool. He’s a cool guy, always shows love for my music too. 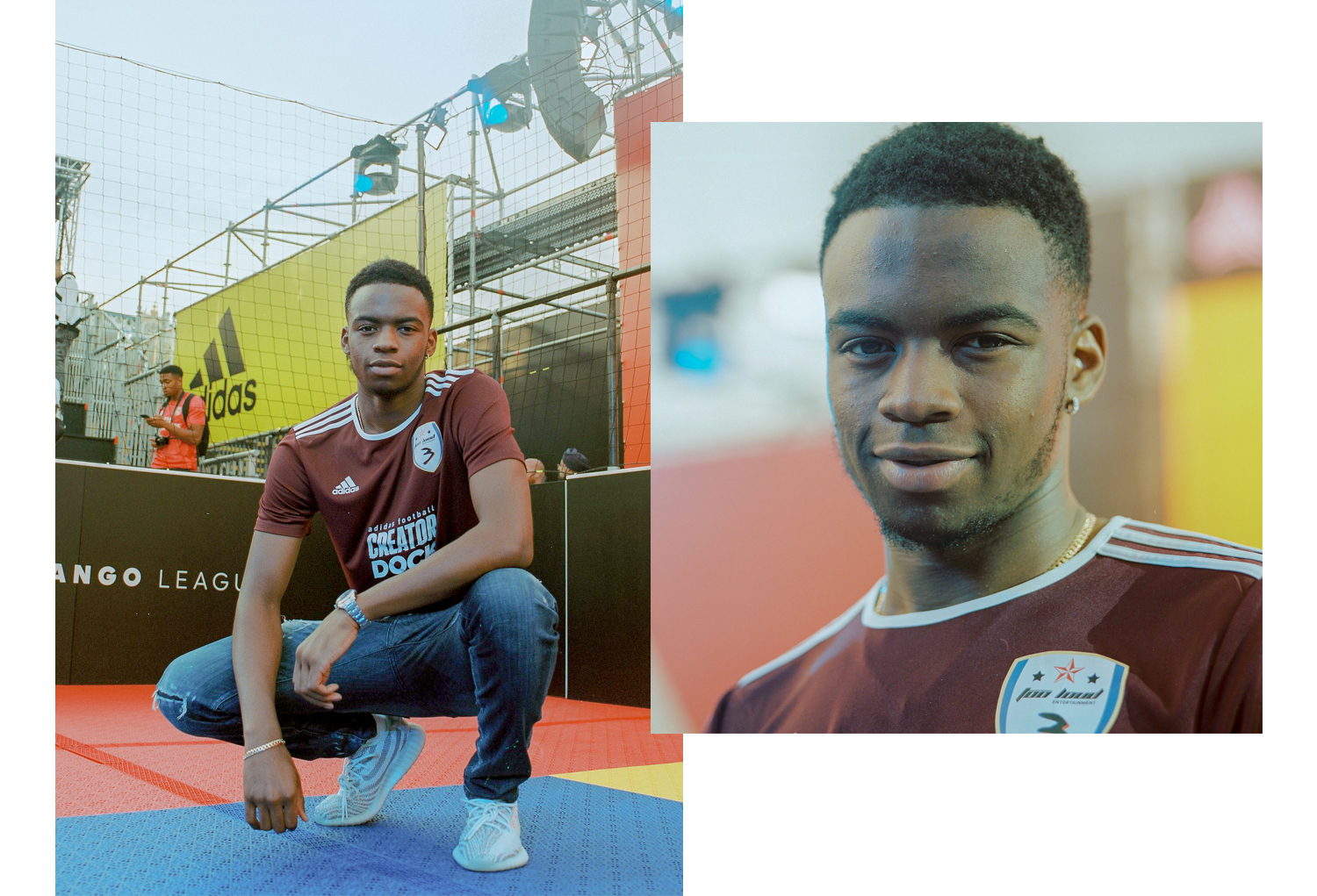 “Skepta can play, I played with him out in Nigeria and he’s a baller.”

Who would you pick in your best MC 5-a-side team?

This is a tough one. Who would I have in goal? Big Zuu, definitely. Skepta can play still, I played with him out in Nigeria during Homecoming and he’s a baller. I’m obviously playing. Avelino makes the cut too. Dave, because we have such a competition going on…he has to be on the opposite team, he can stay on team Santan. And then the last baller, probably Dirtbike LB – he can hit a serious free kick.

You and Loski have dished out bants together about being Arsenal and Man U fans. Now that you’re both in a relegation battle, who’s giving you the most flak?

You know I’ve never really had a lot. Ah nah, actually you know what, it would have to be AJ man. He just dishes it out. You saw what he did with Dave the other day after the Spurs game?! He just violates constantly!

What do you think of the football shirt trend in fashion? Have you been repping shirts before it became hype?

Back in the day I was wearing a couple shirts still, I’m not gonna lie. There was a couple teams man was repping back then…

So if we look is there gonna be an old Bebo of you in an Arsenal shirt back in the day?

I hope not, I hope not (laughs)… maybe on my MySpace back in the day. There was this old Arsenal shirt which man used to wear to bed, then I clocked and thought “What am I doing?”…so I burnt it.

You’ve had a mad glo up in the last few years. What’s that been like personally?

It feels great man. You know being able to celebrate with my team has been great. It’s a straight family kind of thing. They’re elevating me, whatever energy they’re giving me in studio is the energy I’ll put on a track. If they think a track is shit, they’ll tell me straight up. You need that honesty around you for sure.

Do you feel like there’s more to come from you? What is your end goal with music?

There’s 100% more to come – but there’s no end goal. I’m just gonna keep coming with heat ’til man is the biggest artist on the planet. 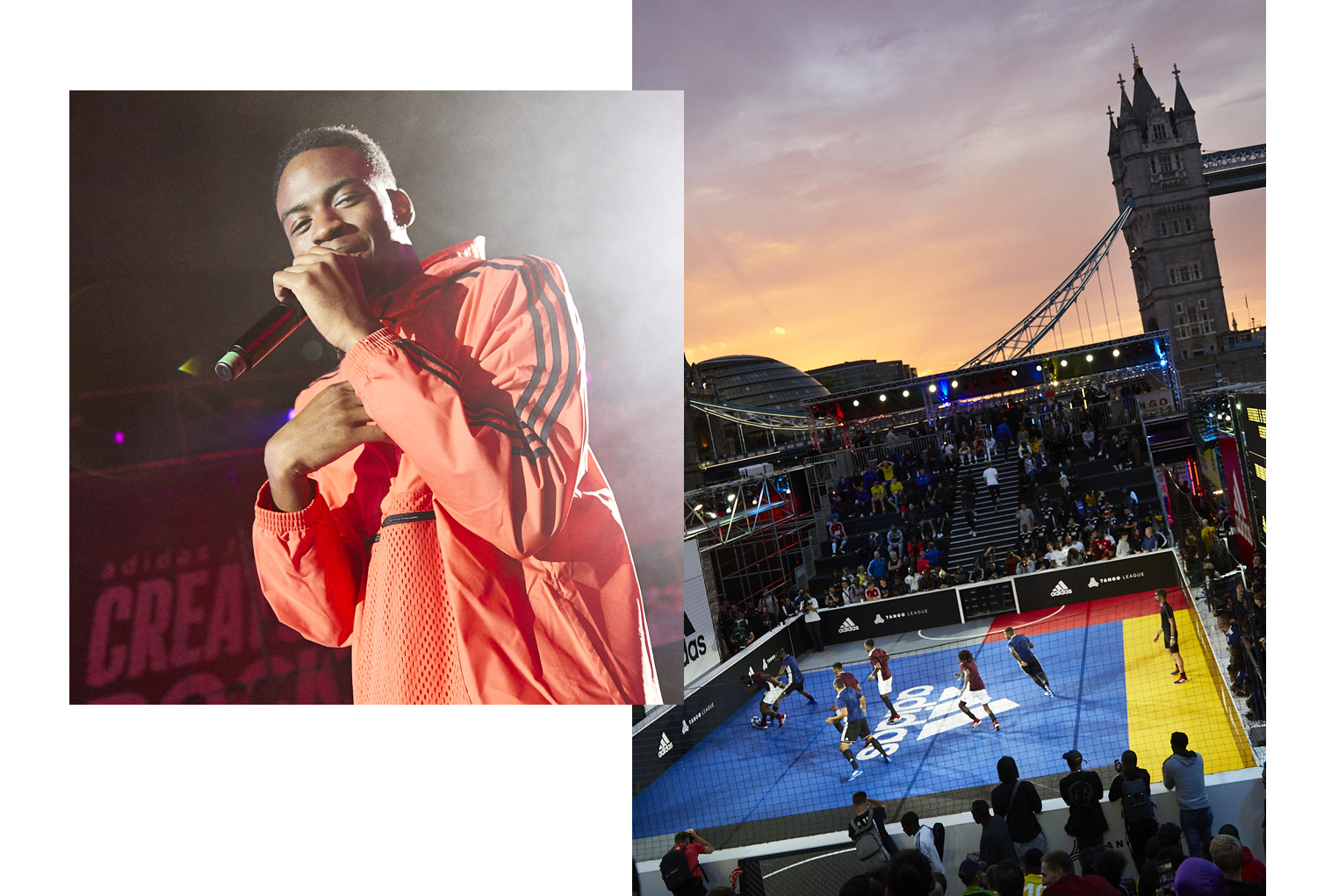 “Khalid and Akon would be the two artists I’d love to work with.”

And you’re charting now too, with “Butterflies”…

Yeah “Butterflies” is legendary. We’ve got a video coming out for “Trekked Like Me” as well, which should set it off.

Who do you have the maddest studio sessions with?

Who would you like to collab with next? Who is your dream collab?

Khalid 100% – I think he’s sick. Him and Akon would be the two artists I’d love to work with. We’ll see if we can make it happen!

What have you got planned for the rest of the year?

More music! Videos coming… I’m on Jess Glyne’s tour too which will be hard, she’s doing bare big arenas so that’ll be mad performing at some big venues. I’ve also got my European tour and African tour coming up, so keep an eye out for that.

Not3s was speaking at the adidas Creator Dock in London and launched Manchester United’s away kit for 2018/19. To find out more, visit adidas.com/football.

VERSUS photography by Jay Kamara.