It’s a bright autumn day in northern Manchester and the local ‘Goals’ pitches are abuzz with young teams eager to impress watchers-on and a host of on-looking scouts. The high turnout of scouts is due to the launch of Ellevate – a new, Instagram-like phone app which will aim to assist young ballers looking to make their grade in the game by giving them a platform to promote themselves and get scouted.

The levels are high, but sharpen even more quickly when murmurs go around that a local star has entered the vicinity. Phil Foden, still wearing his England U21 tracksuit from the Young Lions 5-1 victory against Austria the previous evening, strides on to the pitch during a warm-up for one of the games, and the head of every player gravitates towards the 19-year-old, who immediately gets bombarded with photo requests.

Everyone at the venue today has probably seen footage of Foden terrorising Austrian defenders the night before, where the 'Stockport Iniesta' shields the ball with superglue-like precision from two players with his left peg before dancing around both of them, nutmegging a third, and then being wiped out by a fourth before he gets a chance to cross the ball in. 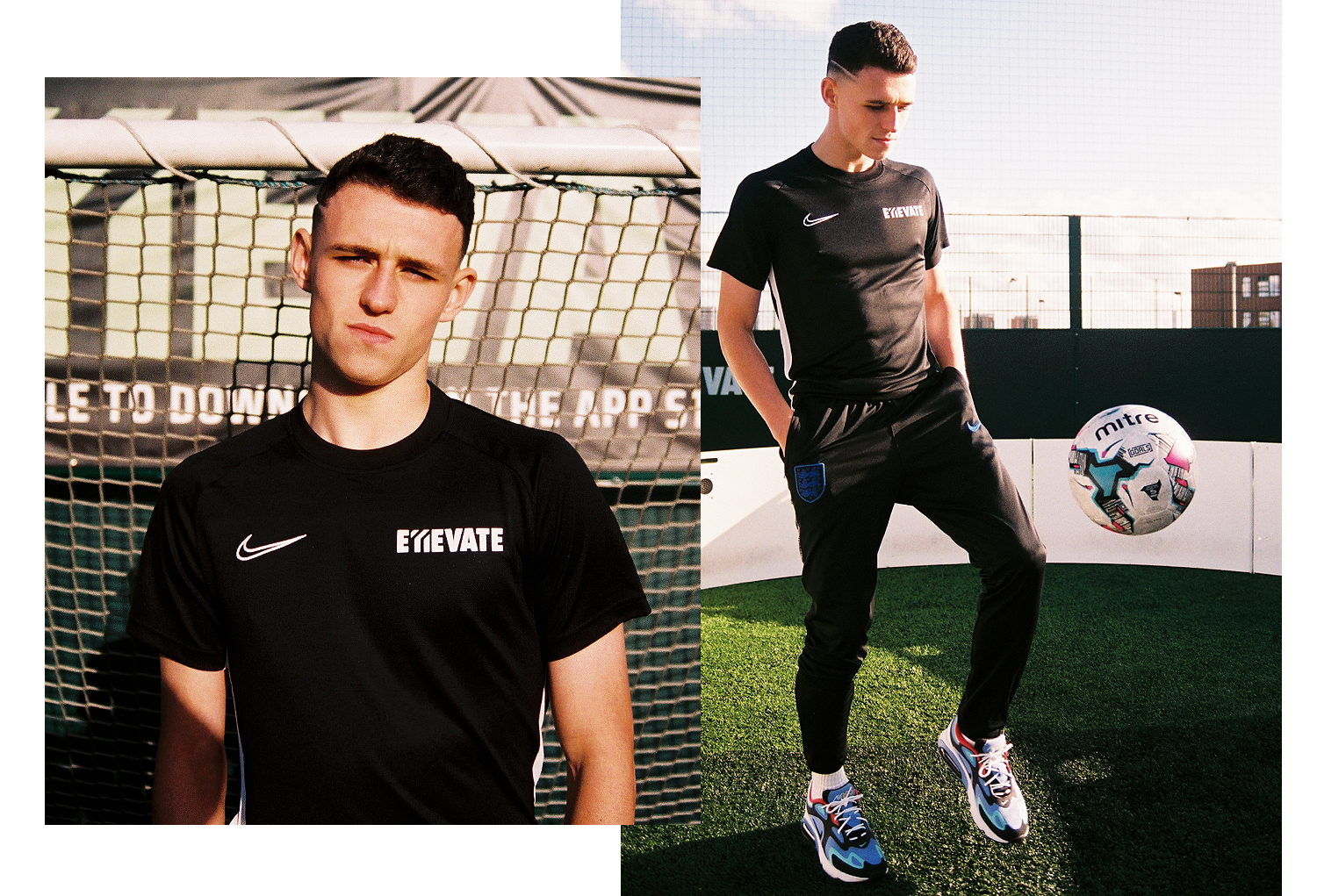 Now, they’re watching one of England’s brightest talents show what he can do first hand. With publications and camera crews buzzing around him, Phil is asked by a rep from the Ellevate app to hit the crossbar and catch it straight afterwards as part of a “swipe up” promo video.

Barely breaking his stride, Foden nonchalantly pings the ball straight onto the bar first time, catches it as it zips back to him, and then turns to the face the camera before delivering the prompt. Remember those Ronaldinho ‘Joga Bonito’ videos back in the day? The tek on display here is pretty much the same as that; except we’re in Manchester – not Barcelona – and there’s been no airbrushing tools or video editing on what everyone’s just witnessed live in the flesh.

It serves as a reminder to the fact that every time Phil Foden has stepped foot on a football pitch this season, he has delivered. Despite only being afforded a relatively small number of minutes in the Premier League, when I speak with Phil, it’s clear that he’s a man who is confident knowing he’s not only playing the best football of his career, but also in the right place to do it.

After finishing up kicking the ball around for a bit, Foden heads over to talk to me about why he’s here today with Ellevate, his come up from the streets of Stockport and his progression from England U17 World Cup winner to becoming one of Manchester City and England’s brightest talents. It’s immediately clear that Foden’s head is geared towards delivering on the hype. 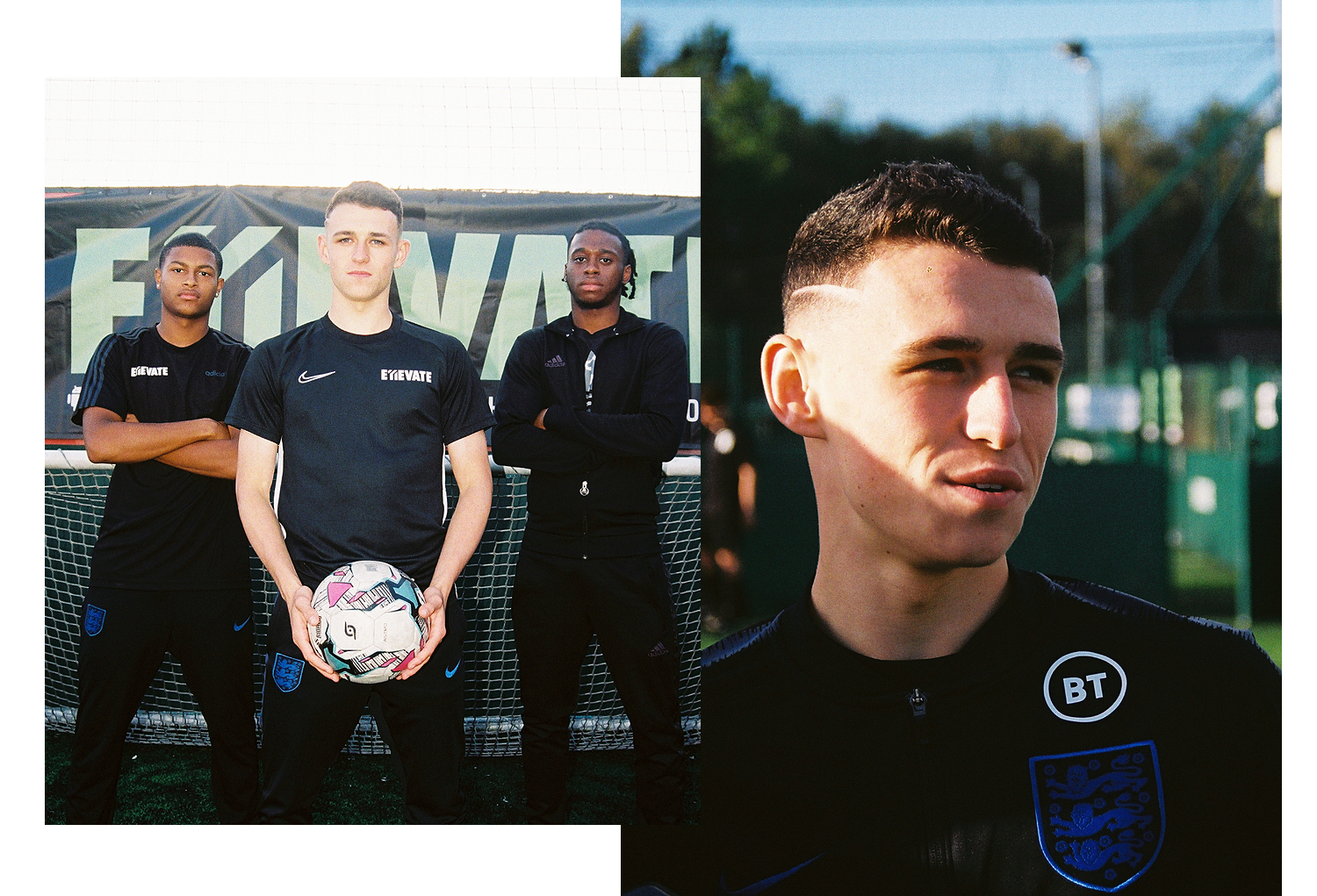 VERSUS: You were raised around the corner from where we are today, in Stockport. How important are apps like Ellevate going to be in discovering new talent in the area you grew up in?

Phil Foden: I think it’s really important you know. For me, I got scouted through my school, and apps like this are making it easier for a player’s talent to get recognised. I think it’s good to set things like this up in the future and hopefully it leads to good things for the lads out here today. I’ve not been here long and already seen some tekkers on display! Let’s hope they get scouted.

We know a lot about South London ballers making an impact in the England youth teams at the moment – we want to know what makes the North West a good area to grow up and play football in, and do you think it’s a different style of football to London’s?

I think up here everyone just loves their football. The culture up here for most people growing up is football, so you just grow up enjoying the sport and loving everything about it – that’s the mentality up here. I don’t think it differs so much from London in that respect.

We’ve seen your former teammate Jadon Sancho give back to his area by building a pitch there with Nike this week. Would you want to do something similar for Stockport and the youth teams there?

Jadon’s pitch is amazing. It’s amazing what he’s achieved out there in Germany and the impact he’s made making something like that available to the next generation of players. I’d love to do something similar for Stockport one day – I really want to give back to my community there as much as I can – so hopefully I can do something like that in the future!

You won the U17 World Cup with England with a host of players making waves at senior level. What was it about that team that was so special?

It’s hard to say certain names, because for me everyone in that team was just so special. Everyone was so talented and the chemistry was amazing between us lads. You could really see the future in the whole of that team in my opinion. I’m certain that most of that team will go on and have very fulfilling careers, for sure.

You were also on the pitch with Rhian Brewster – who’s also here today – when he received racist abuse at the U17 World Cup. You’ve seen what’s happened recently with the senior side too, do you think more needs to be done by UEFA and FIFA to eradicate racism from the game?

The lads handled that really well. The way they went about it and didn’t stress on the pitch was amazing to see – they set an example for everyone going forward. Showing that composure and reacting like that in the face of racism is how to do it. If you react, you let them win, so I think they handled it really well. I hope proper, appropriate action gets taken, because it’s completely out of order. Something has got to change.

As a local lad that’s made it big and won trophies with his boyhood club, how does it feel to be where you’re at with so much silverware under your belt at such a young age?

It’s a complete dream come true. I could never imagine this growing up.. it’s all gone so quick too! I’m honestly just enjoying every day and I want to keep on winning trophies with the lads here and try and be the best I can be. At City, I know I can go on and achieve more greatness, and I’m certain it’s where I can fulfil my potential and get to the top of the game. 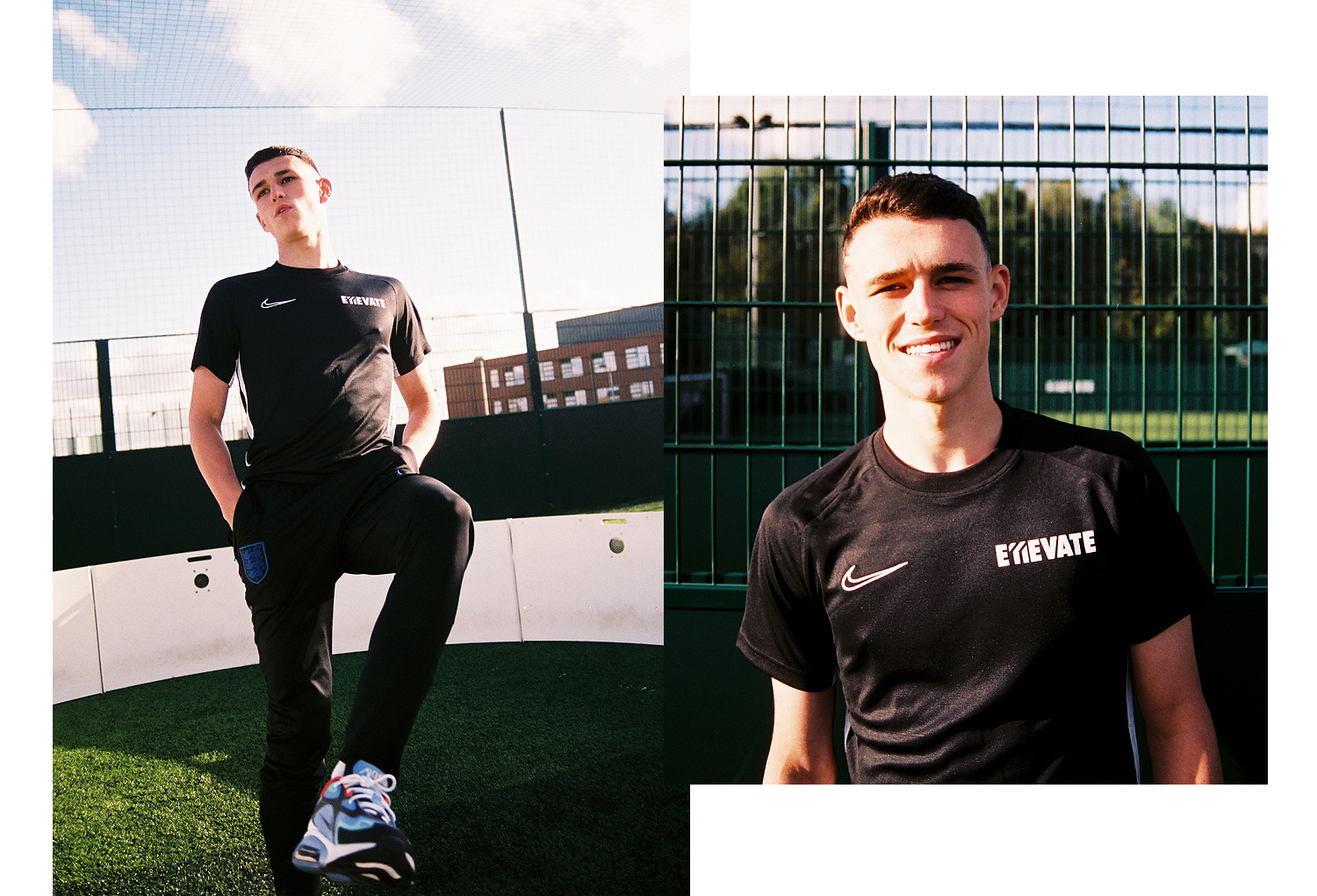 Out of all the players you play with at Manchester City, who have you learned the most from?

I’ve learned different things from different players, so it’s hard to say just one player. Every player here has helped me improve different elements of my game. There’s a lot of talkers in the team, like Fernandinho is a very vocal guy, and Vinny before him was too.

Those guys have elite mentality. David and Kün are both so experienced too, for example, so to be alongside them every day is a blessing for me. It’s just a great team all the way through, and that’s what makes us so strong.

City’s academy is one of the best in the world. Who are you tipping to be the next player to break through at City, and what’s it been like progressing your game here over the years?

Whenever I watch the youth teams, I’m blown away by the talent on show. There’s always three or four players who are impressing me every time here each game. It’s difficult to say one player – just watch any of City’s youth sides and you’ll be impressed!

Progressing my game here has been a dream as I said. The facilities are top class and I’ve had everything I need to get to the level I’m at at City, as do all the other boys in the Academy.

We’ve seen you absolutely tearing it up for England’s U21 side in recent weeks – particularly against Austria with the ball glued to your left foot – do you think you’d give the senior side a good game?

I’d like to think so! But I think the experience might let us down…but it’d be nice to see how we’d get on. Those boys in the seniors are playing at the highest level on the regular, so it’d be a hard game.

Raheem Sterling recently said he wants to start alongside you in the England set up. Do you believe if you’d have started more games at City you’d have had a call-up for the senior England squad with him?

It was nice Raz saying that, it meant a lot. I think Gareth Southgate has been watching all of us very carefully, and he knows all our talents and what we can do. When it comes to being selected for Euro 2020, there’s so many midfielders in the set up and not everyone can get on the plane, so it’s gonna be difficult for him to choose from all of us.

Whenever I’m played, I’ve just got to make sure I’m ready – no matter what the competition. I believe in my ability and think that I can make the difference in every game I play in – I’ve just got to keep proving my worth every time I step on to the pitch. 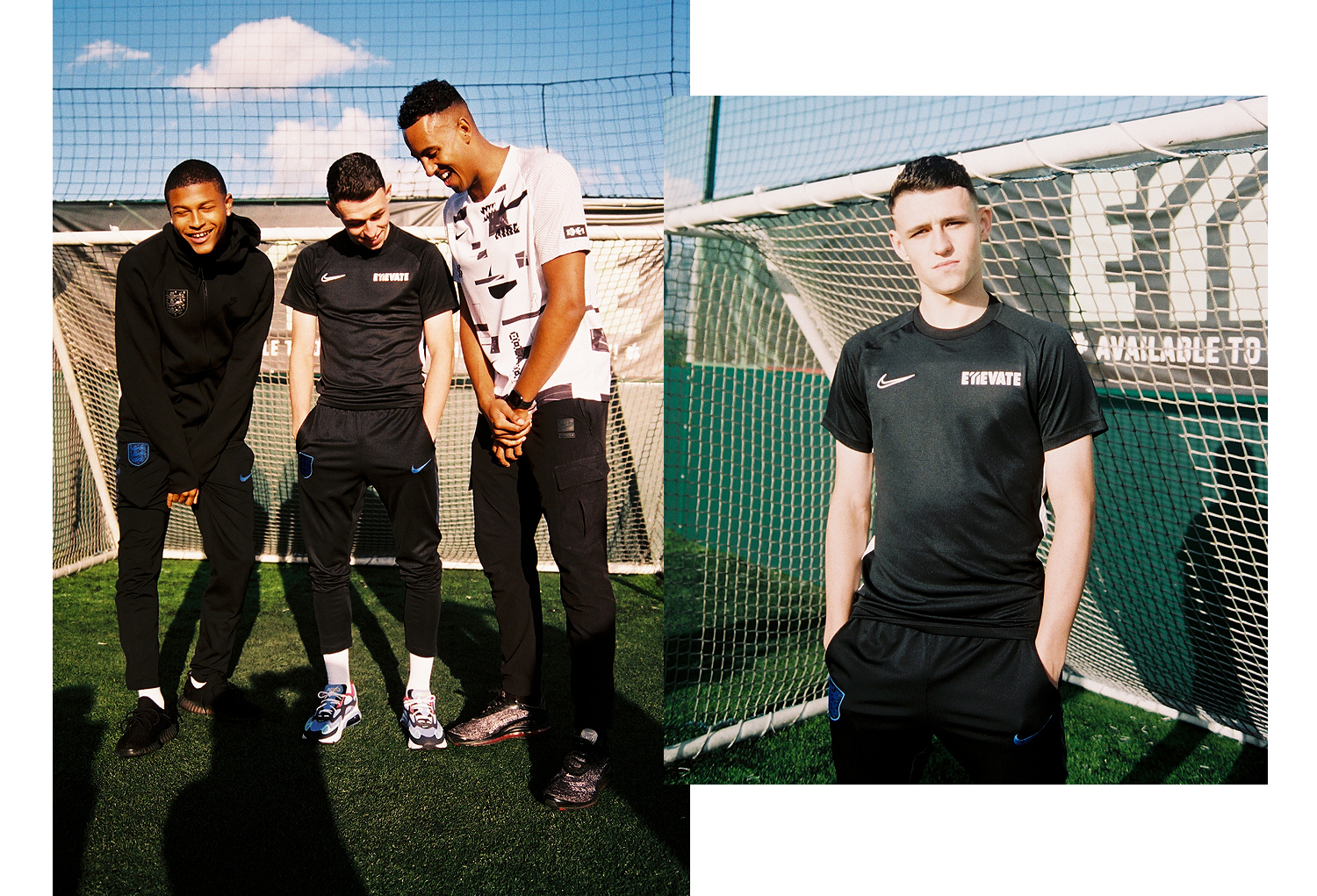 You were handed a ‘Future Stars’ card in FIFA Ultimate Team last year – did you end up playing with it in last year’s game?

Yeah it was decent! I’m expecting to have a better card next season though for sure…I’ve got Leroy and Riyad in my team at the minute, so my team’s shaping up pretty nicely.

Do you believe that you can reach your potential at Manchester City and see that 88 rating one day?

I think I definitely can. It’ll take some time to get to an 88-rating though. It’s all about timing with these things, and there’s a lot to my game that I can improve on.

What do you think you can improve on in particular?

My defensive duties are hugely important to me and I need them to improve. My weak foot needs some work too! But yeah, the list goes on, always.

What’re you saying off the pitch, then? What’re you wearing and listening to at the minute?

I’m very casual off-the-pitch with my style. I’m always wearing my City or England trackies off field in fairness.

In terms of music – I’m rating Aitch you know. He’s doing bits! Shout him out every time, keep doing your thing man!

What are your ambitions for next season at City?

I’m gonna try and take every opportunity I get with the team and not take my time here for granted – it’s as simple as that!

Download the Ellevate app now and build your player profile.