No matter where you look – the Champions League, the Premier League, or within the England national team – South London is taking over football. The area dubbed 'Concrete Catalonia' has become the global capital of new talent, with the likes of Jadon Sancho, Callum Hudson-Odoi and Tammy Abraham all calling that part of London home and bringing a unique blend of tek, expression and enjoyment to their game on the pitch.

While the new wave of talent south of the river deservedly gets the headlines, one man deserves more credit than most for influencing the way these guys kick ball. Succeeding against all the odds, breaking records for one of England's most legendary clubs, and taking to the pitch with confidence, expressiveness and enjoyment – Ian Wright is the original South London baller.

More than 20 years after he last kicked a ball for Arsenal, Wrighty remains of the most influential players for this generation of fans and players. Not turning professional until he was 21-years-old, Wright had an improbably journey to the top of English football and earned widespread popularity for bringing his personality to the pitch in every single game. As Poet so perfectly said in an interview with VERSUS last year, "Ian Wright never compromised – he was always true to himself – and that was inspiring.”

Wright's longstanding impact on the game has now been recognised by EA Sports, where he's been added to FIFA 20 as an 'Icon' for the first time ever. We linked up with Ian Wright at the launch of FIFA 20 to talk about what it means to be back in the game, how he feels about the new generation of South London talent, and why it's so important for him to act as a role model to young ballers like Eddie Nketiah. 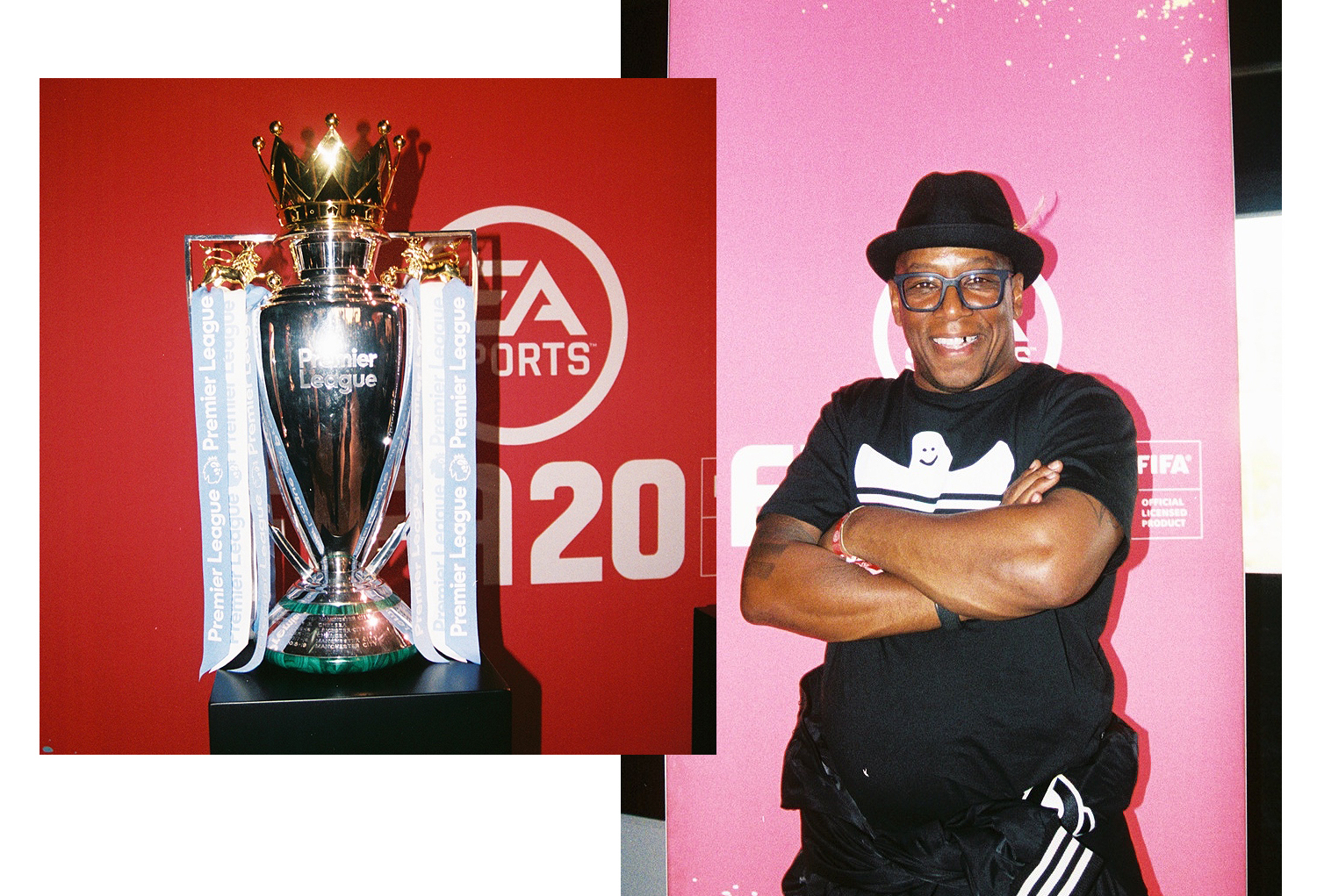 VERSUS: You’ve returned to FIFA 20 this year as an Icon – it’s your first time back in the game for around 20 years! What does it mean to make a return like this?

Ian Wright: It’s nice to get this recognition, man. In this generation there’s a lot of people who haven’t seen me play – and yes, you can see stuff on YouTube or Instagram but it’s not the same. To get the kind of recognition where fans of the game today can choose to use me in the game and have some sort of direct involvement with me and my career, it’s nuts. Especially when you see other Icons in FIFA 20, this is the ultimate recognition.

And one of the great things about you being back in the game is we can put Ian Wright alongside the likes of Messi or Aubameyang in FIFA Ultimate Team. If you could choose one person from the modern game to play up front with right now, who would it be?

I’d probably want to play up front with Messi, he’s got that bit of creativity to his game just like Bergkamp did. I love Ronaldo as well, these two guys have shaped the game for many years and the levels they set are unprecedented. I wanna see who the next two guys are going to be because the bar has been raised so high by Messi and Ronaldo…but the next gen are still going to believe they can match it.

EA Sports are giving a big shout to the streets this year with VOLTA Football. Street football is having a big influence on the game right now if you look at the likes of Jadon Sancho and Callum Hudson-Odoi. As one of the original South London ballers, what makes the area so special?

Ah man there was also David Roscastle, Danny Wallace – both of them are legends. I don’t know exactly why it’s happening but for so many people to come from South London and go on to do so well in the game is amazing. London in general – and the people in Liverpool, Manchester and Birmingham will all say the same thing – has such a connection with football. It’s all we do as kids growing up in London…and all those players you mentioned, if you speak to them now, they feel exactly the same way about football as I did when I was young.

Yeah, they’ve got distractions like gaming and social media but don’t be fooled by that, it’s still all about having a ball at your feet and developing your skills! That never stops and it’s why the game is constantly evolving. 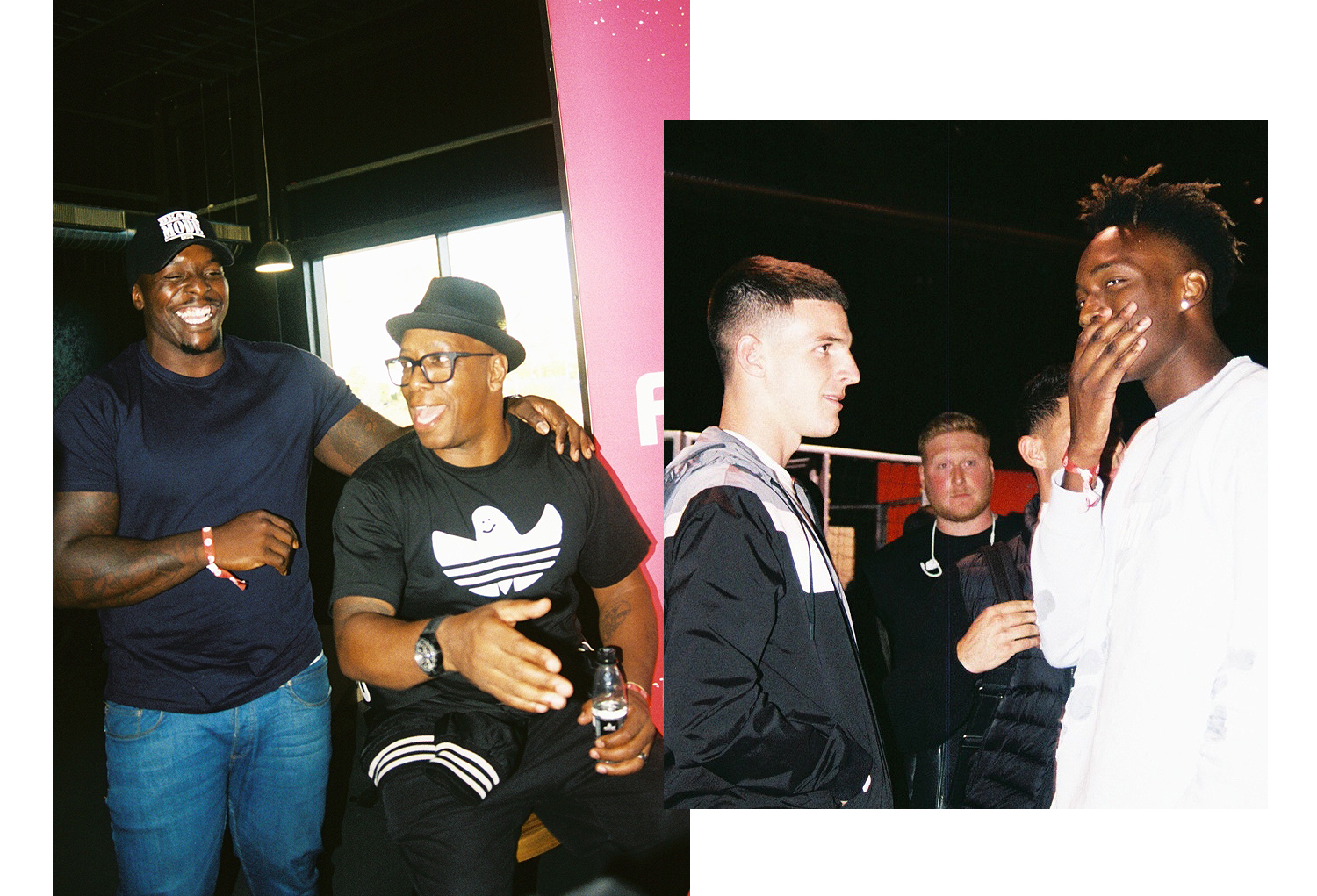 “We’ve got a diverse and progressive manager who wants to give opportunities to young players for England.”

Those players are making it such an exciting time to be an England fan right now. What’s your take on this generation of Young Lions?

Obviously seeing someone like Jadon Sancho break into the squad, and Hudson-Odoi similarly before his injury last season, and Loftus-Cheek was doing bits before he got injured…watching these people come through is so special. Raheem Sterling’s emergence into a world class player has been fantastic, too.

What’s great is that we’ve got a young manager who wants to give opportunities to young players for England. He’s confident and diverse and progressive in his thinking, and that’s important for young players who want to make an impact on the national team. It’s a good time.

Another young baller that’s setting levels is Eddie Nketiah and it seems like you’ve struck up a really nice relationship with him. What’s the story there and why is so special?

I’ve known about Eddie for a long time and we’ve really got to know each other lately. We just started talking about what he should be doing on the pitch, how to get more goals, how to improve his runs…we just got closer and closer, and it’s one of those things that has just clicked. I always watch his games and he phones me to tell me what’s going on, we’re just linked now! He’s somebody that I’ll always look out for because I feel he’s got the potential to go as far as he wants and hopefully it will be at Arsenal. He’s such a talented goalscorer. 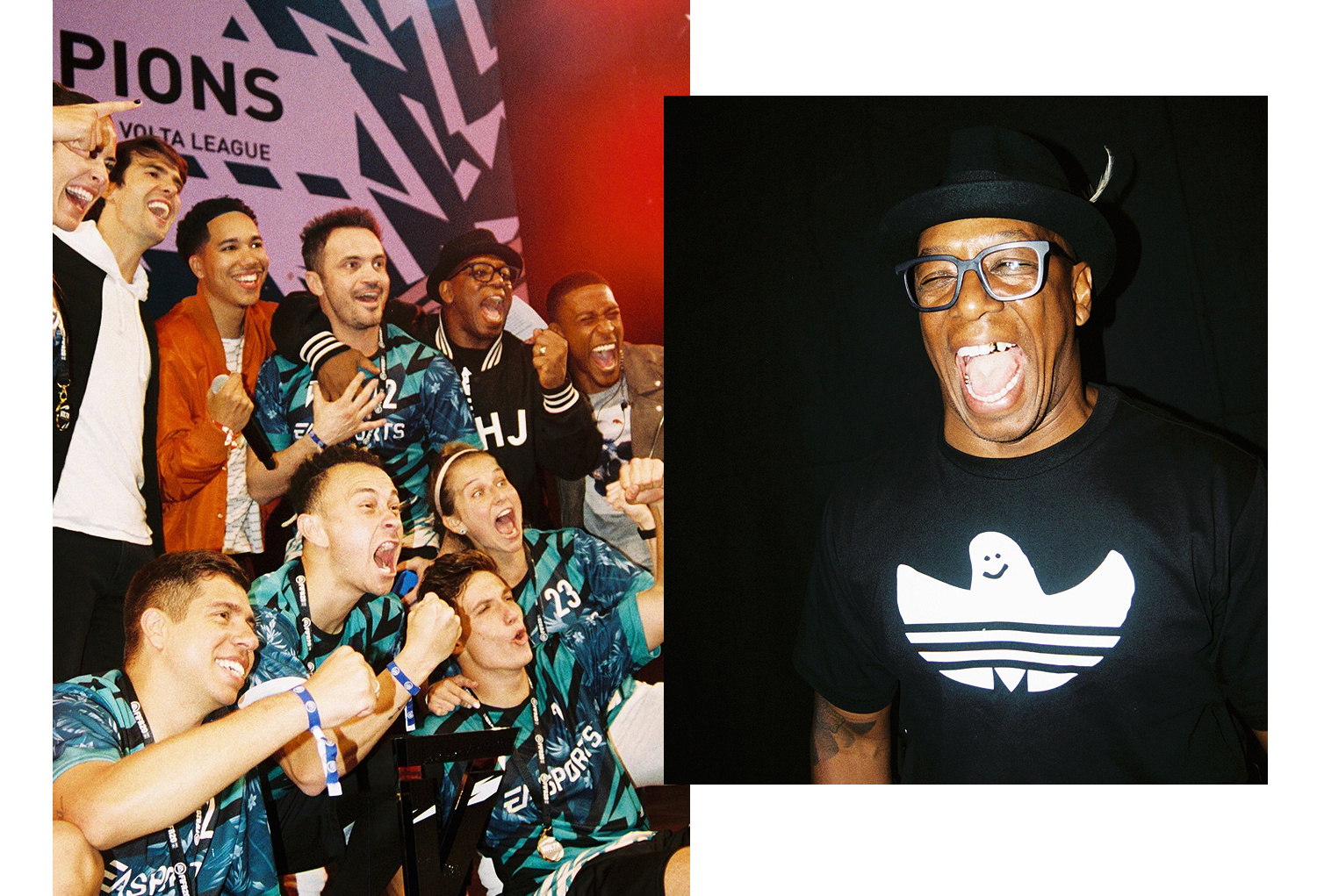 “Football is entertainment, football is art – you can make it whatever you want to be.”

We speak to a lot of young players and when we ask them who their biggest influences were growing up, two names always come back: Ronaldinho and Ian Wright! What was it about your play style and the way you carried yourself that still connects with so many people?

You’re joking! I think because I came into the game so late, I played a lot of street football and amateur football where I could just do anything I wanted – I used to play games on a Sunday where I’d deliberately try and only score goals that came off the crossbar, mad stuff like that. I get so many comments on the goals I scored – chips, flicks, crazy runs – and I think it’s because I was very expressive when I was on a pitch. The game right now is all about expression and I was lucky to have that vibe about me when I was coming up – I’d always try and do things that were different to how I saw other people playing.

Do you realise how ahead of your time you were in that respect?

Nah, it’s only when you have these sort of conversations that you reflect on it. I was just playing that way because of my pure love for the sport and the buzz I’d get from playing professional football. It’s something that I just did and I’m so pleased to hear that you or anyone else thinks I might have had some kind of impact on today’s young people…but I take no credit for the stuff the guys are doing now!

All I’d say to this new generation is: I love the way you are playing with a freedom and expression that does justice to the sport. Football is entertainment, football is art – you can make it whatever you want to be. 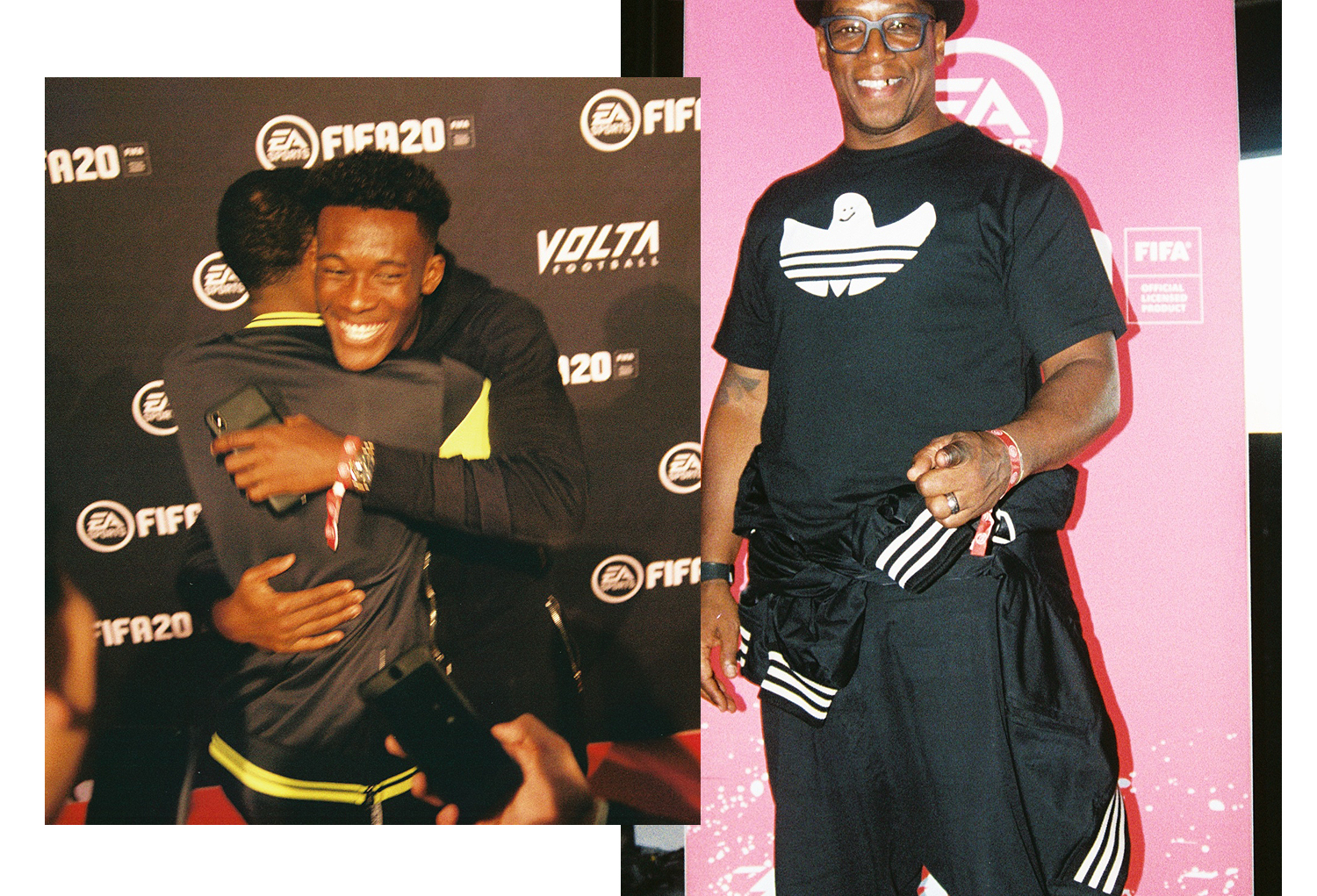 “Wrighty’s Tekkers Challenge is coming back – Headie needs another go.”

And your grandson signed his first contract with Manchester City recently! What does it mean to you to know that another Wright generation could make a mark on the professional game?

I’m obviously very proud. The road he’s on is a very difficult one as I know, as his dad knows, as his uncle knows…so we know how hard it is from this point! It’s great to have a moment to reflect on the fact that he’s signed with Manchester City and he trains with the first team, but that is just the beginning of a long journey. It doesn’t mean anything right now, he has to go on and achieve. That’s what we’re all hoping he can do – the hard work starts now and he knows that. He has to work so hard but it’s wonderful to know that he has someone like Raheem Sterling there to look at and other great players to learn from. He’s in the right place.

Finally, the Wrighty’s Tekkers Challenge series from earlier this year was amazing. What were your memories of that experience and who are the artists you most enjoyed vibing with?

What I love about everybody that came on the show was that they were so hell bent on doing mad skills…but it didn’t happen! Russ made me laugh because he was the epitome of what I’d expect someone who wanted to play football – but doesn’t play football – to be like! He was trying overhead kicks and it was the same with Tion Wayne, Headie One…they were just doing stuff that made me crease! They wanted to have fun and it was great to see. It’s going to come back. Headie needs another go…