‘New Beginnings’ is an editorial series in partnership with Arsenal celebrating a new generation of elite talent at the club ahead of the women’s team’s historic return to the Emirates Stadium in the 21/22 season. Although Arsenal Women’s home is Meadow Park, they also belong at one of the world’s most prolific stadiums: the Emirates. This season, for the first time ever, Arsenal WFC will play not one, but two games, at the iconic North London ground. ‘New Beginnings’ will profile the Gunners who are focused on breaking new ground and making history at the start of the biggest Women’s Super League season of all time. The only way is up.

Nikita Parris is ready to tear up the Women’s Super League once again after two successful seasons with European giants Olympique Lyonnais, where she reached the top of the game by winning the Champions League title back in 2019/20. The Toxteth Tigress is now back in the country that made her, ready to paint London red and potentially reclaim her WSL all-time top goalscorer title from her new teammate and certified top striker, Viv Miedema.

Lil Keetz is no longer a young Gun, she’s a seasoned vet ready to make her mark on the country’s Capital and remind English football what she’s all about. Goals. And lots of them. The homecoming party is set to be something special, as she steps out with her Arsenal teammates onto the pitch at the Emirates this Sunday, in her first-ever London derby against back-to-back WSL champions Chelsea.

We sat down with Keetz at London Colney ahead of the monumental opening fixture, to talk about her much anticipated return to what she calls: ‘the best league in the world’. 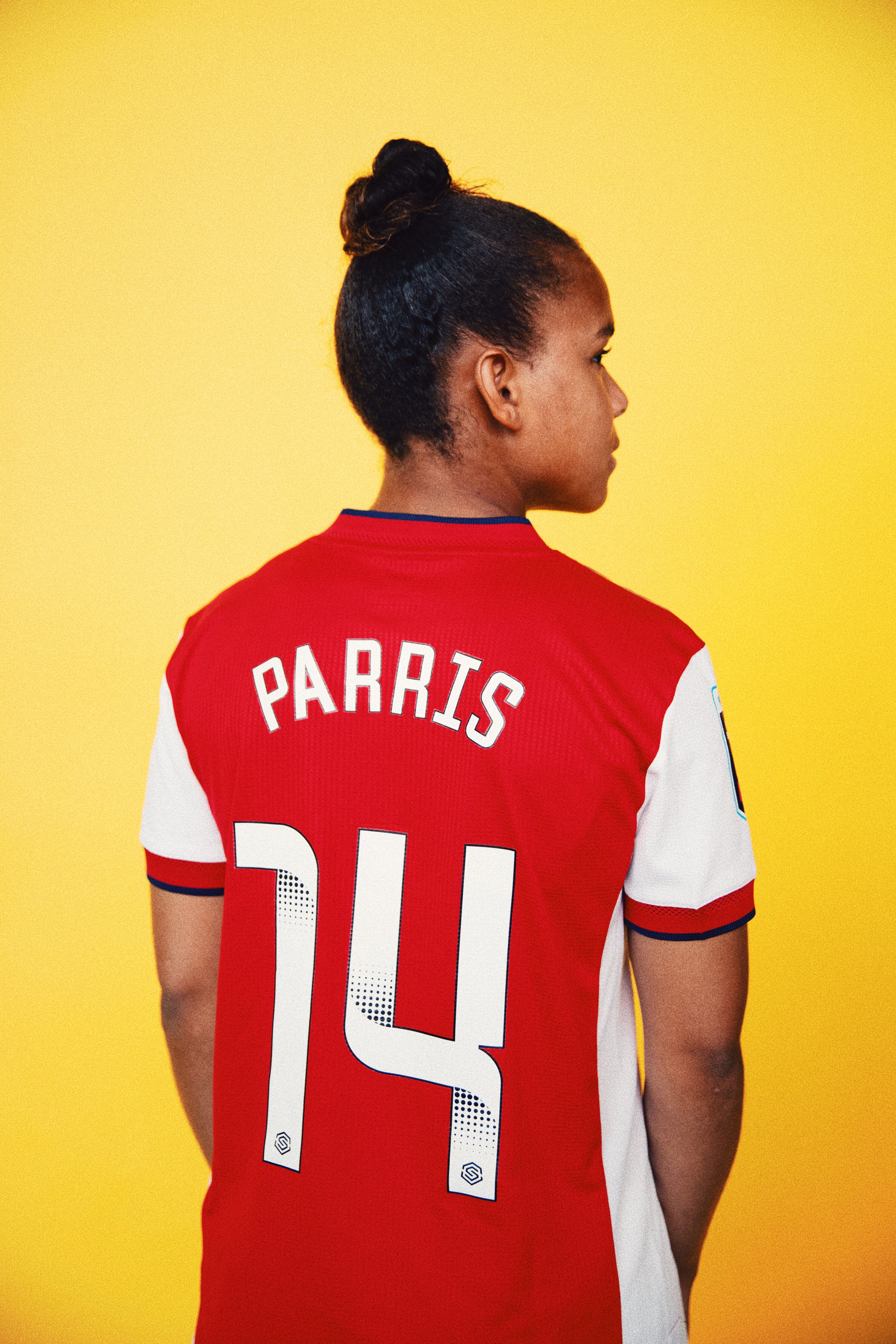 VERSUS: This series is titled ‘New Beginnings’. If there’s any player at Arsenal who that headline is most applicable to you, it’s you! New team, new manager, new city, new records to set… does this feel like a fresh start, or the start of something new for you?

Nikita Parris: Oh yeah, definitely. Obviously, I’ve played in the WSL before, but I have never played for a southern team! So being here at Arsenal does feel new to me. New team and a new manager like you said. I do know most of the girls but there are a few new faces, people I’d like to get to know better. When I was at Lyon, I learnt a lot by speaking to different people, experiencing different cultures, and speaking a new language. All of that really helped me to grow as a person and be more open-minded.

Those are learnings you can definitely apply to a diverse club like Arsenal. Are you ready to pick up where you left off and reclaim that WSL all-time top goal scorer title from Viv?

I think that will all come with good performances and putting yourself in the right positions – the goal scoring positions! – and taking your chances as and when they come. When I was scoring goals for Everton and Manchester City, I never thought about being the top scorer of the whole league, I just thought about winning trophies, and scoring goals to win games. They’re the stepping stones to get to those big achievements and accolades. I left England on 49 goals, and the good news now is, I’m back! And the 50th won’t be that far away… 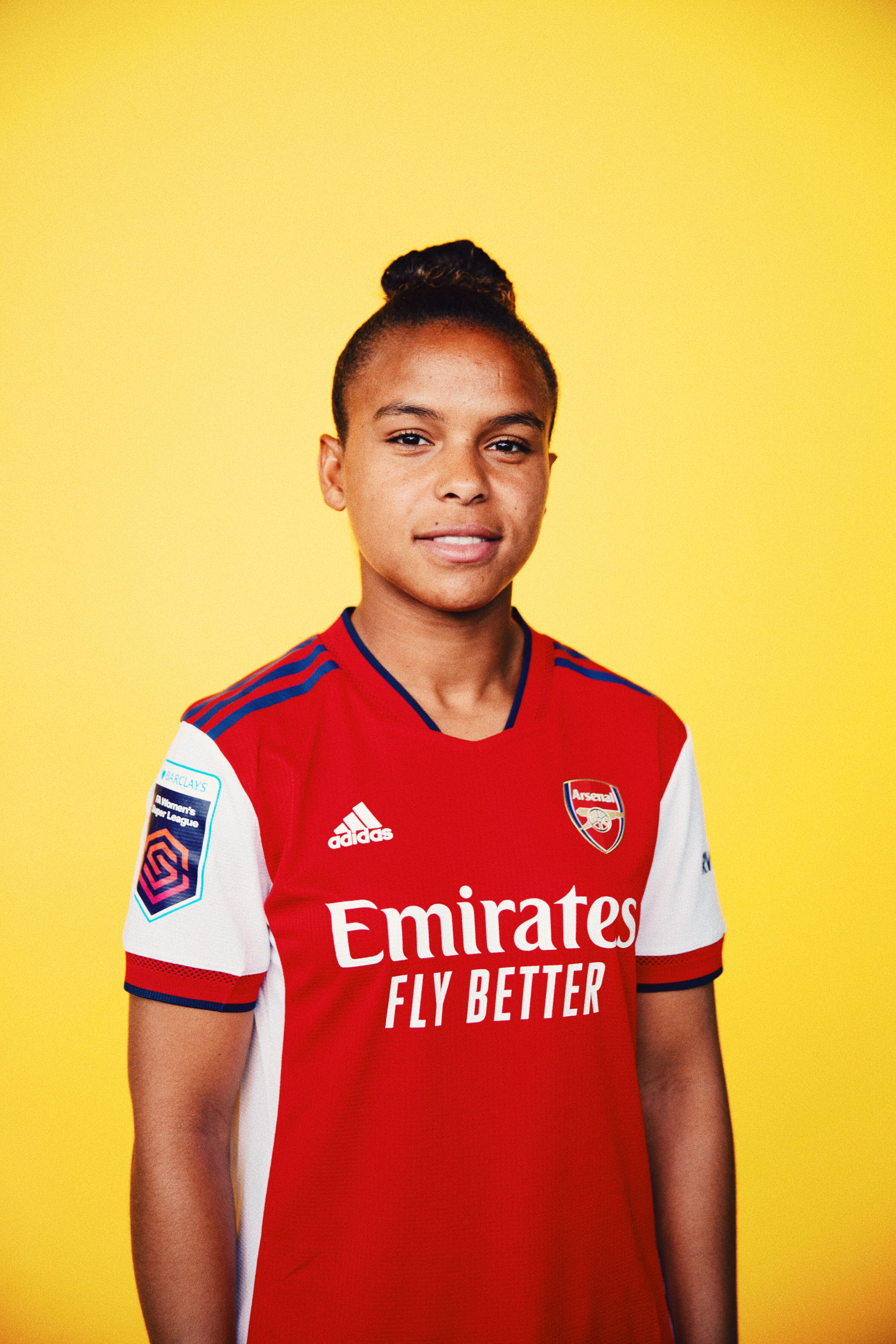 “The history of Arsenal speaks for itself, it’s unbelievable.”

I think you’ve just said it really, I joined Arsenal for its history. Over the last few years Arsenal haven’t really attained the standard they’re used to when it comes to winning trophies consistently. They’ve won the Continental Cup of course, and in 2018 they won the WSL, so when I spoke to the club and we spoke about our desire to win trophies, regaining the title of being the best women’s team in England, and performing to the highest level possible, that excited me. But, you can’t do that overnight, it’s a process and the club has been working hard to put the right things in place to ensure that the team keeps growing.

There’s been a lot of change and investment in the team this year. New players, new staff but also backroom decisions re: medical and different departments that are really going to push the team forward. And when you speak to the girls, they have this huge respect for the club and the badge they play for. The history of Arsenal speaks for itself, it’s unbelievable. 58 trophies as a club is a massive achievement, and growing up my two favourite players were Theirry Henry and Julie Fleeting, who both played for Arsenal, so I think it was just meant to be!

It was also the right time to come back to England, I’d been abroad for a number of years and had done everything that I’d set out to do in France.

Going out to France, for me, was about getting out of my comfort zone and really testing myself against some of the best players in the world day in, day out. I won major trophies, scored a lot of goals in my short amount of time there and I’m back, ready to go again.

You’re back, and clearly raring to go and make your second mark on the WSL. To come back and have your first game against Chelsea at the Emirates. How are you feeling about that, what’s that going to be like?

I am actually buzzing! That’s how far women’s football has come in England you know. We’re playing the big games at some of the biggest stadiums. It’s testament to the league and the FA, how much they’ve invested in the women’s game and for me, it is the best league in the world, by far.

The depth of players each club now has. Just look at Everton’s investment this year or Chelsea’s over the last two seasons. They’re Champions League finalists! The league has come a long, long way and I am excited to be back. 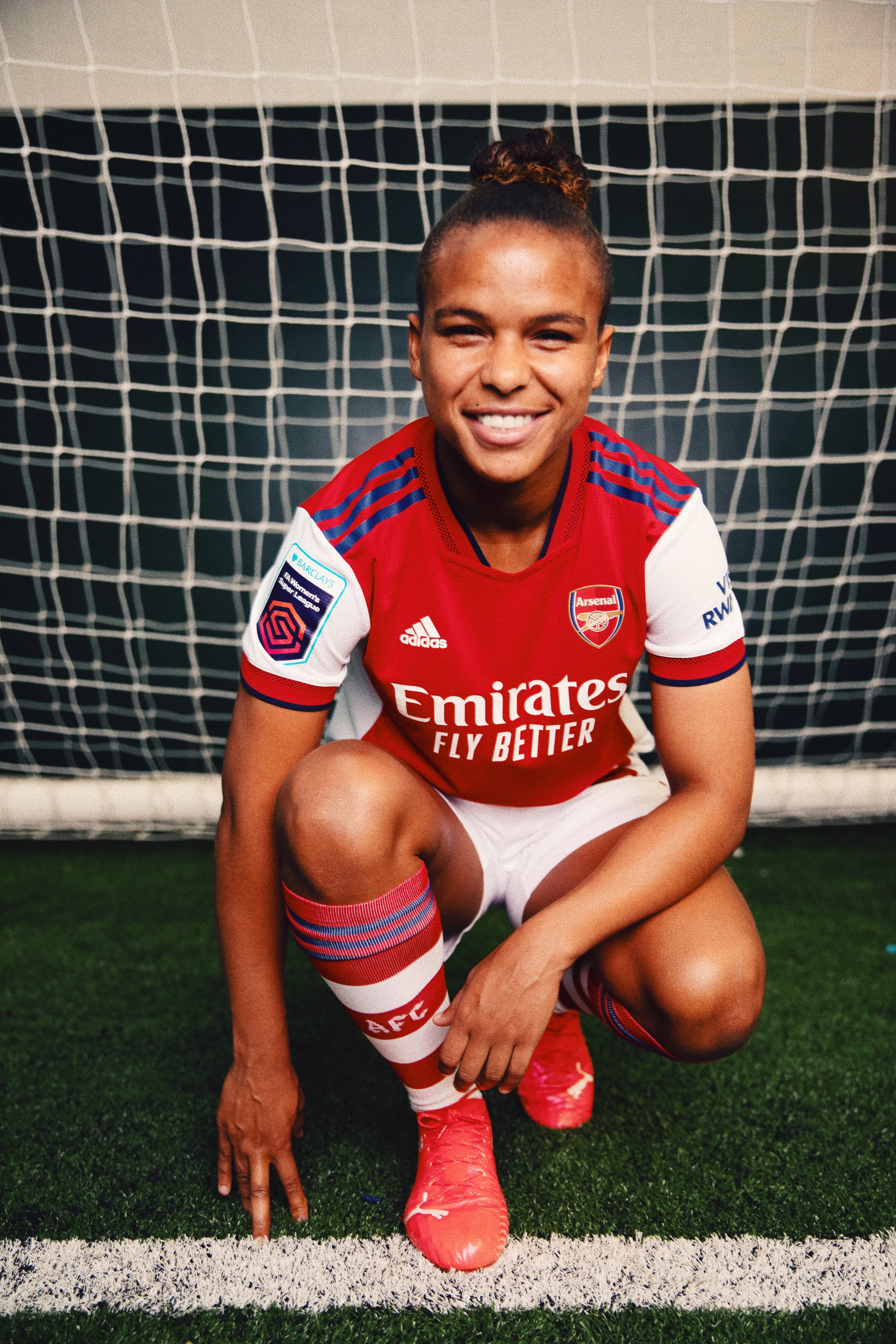 “There’s a lot of quality on and off the pitch in this league and it’s only getting better.”

I have to say, I am a Gunner, but you’ve just spoken about Everton and they’ve made some solid signings over the years. I am really excited to see them play this season…

Yeah, it is going to be unreal in terms of competitiveness! If we look at a team like Manchester United, who had a really good season last year and probably surprised quite a few people with their performance. But when you have a great manager in the likes of Casey Stoney and now they’ve obviously got Marc Skinner who was unbelievable for Birmingham City before he left to work with Orlando Pride in the NWSL. There’s a lot of quality on and off the pitch in this league and it’s only getting better.

In terms of quality, Arsenal have always had quality players and the signings they’ve made this summer have been massive – in my opinion anyway! – Who have you gelled with most on the pitch? Where can we expect that dangerous link-up play to come from?

I think we’ve got to give ourselves some time, we’ve only played two games! But in those games, looking at our forward line, it is frightening.

Then you’ve got Mana Iwabuchi and Kim Little behind that line… Kim is the Duracell Bunny by the way! This girl does not stop running. If you watch Kim’s game, people are quick to say she’s so technical – and she is – but she plays both sides of the game to perfection. She is the real backbone of this team. She’s a great leader for the team. She might be very quiet, but she just leads by example each and every day.

She does her talking on the pitch.

She does! That’s so true. And when you do get to speak with her, she is so knowledgeable and someone you can take so many experiences from. She’s a great person. I got to know her a lot more through playing with team GB during the Olympics this summer, and of course a lot more through Arsenal. She’s a really good person. 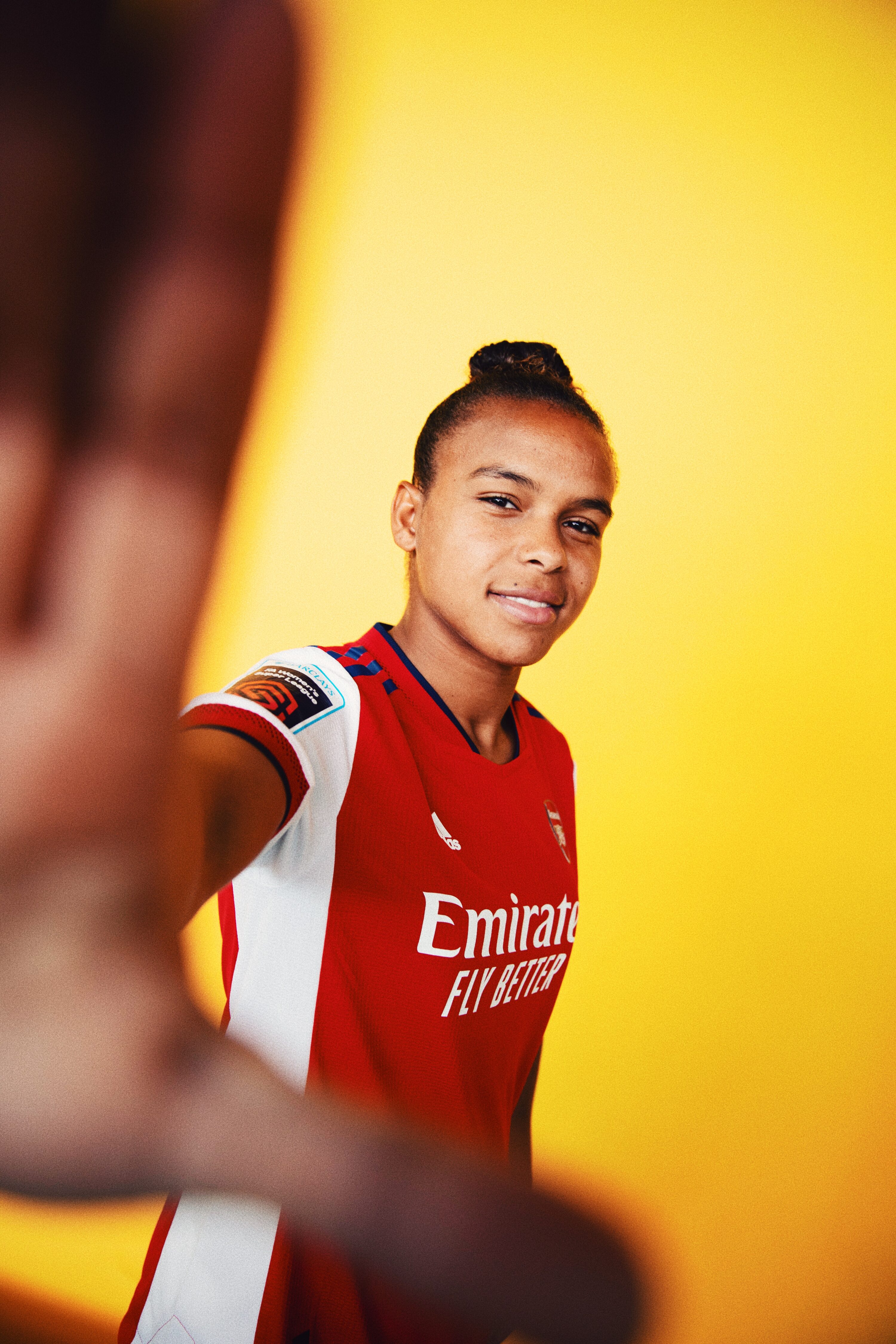 “Everyone makes mistakes and wrong decisions in life, but it’s how you react to those decisions that’s important.”

You’ve already touched on the idea of growing as a person off the pitch, and we’ve spoken about some of the improvements to the women’s game in recent years. What would you say to the next gen of players, the ones who look up to Keetz, about the future of the game?

I think the future of the game is exciting! You’ve got to make sure that you enjoy it. Everyone talks about making sacrifices in football, but for me it isn’t a sacrifice if you love it.

Each and every day, you’ve got to put your best foot forward to be the very best. Sometimes you might miss out on things but there are better moments, greater achievements that lay ahead as long as you keep your head down and work hard. And for me, the most important thing I’ve learned as I’ve gotten older is: don’t be afraid to make mistakes. Everyone makes mistakes and wrong decisions in life, but it’s how you react to those decisions that’s important. And ultimately, they help you to grow as a person. As long as you’re a good human being, the right people will see the good in you.

You get judged for every action that you make in life, and if you listen to every comment then you won’t grow. You’ll just stay in your comfort zone and will be scared to step outside of it. What I’ve learned over the years is, when you decide to speak out, sometimes you might be speaking out on behalf of only three people…but you might make a difference to the lives of those three people. You’re not going to always change the world by what you say or do, but you might change ‘that’ one person’s mind, or ‘that’ one person’s decision and that’s a great thing.

I’ve got high expectations for you Keetz, I think everyone does! There’s such a buzz around you being back on home-turf, and being at a club like Arsenal. What do you want your Arsenal legacy to be?

It might sound cliche, but to leave the shirt in a better condition than when I first put it on. And what that looks like to me is, setting Arsenal on a path to sustain success, to win trophies. I want the young players coming through to live and breathe Arsenal. The most important thing for me is laying the foundations for future generations to make Arsenal the best women’s team in England.