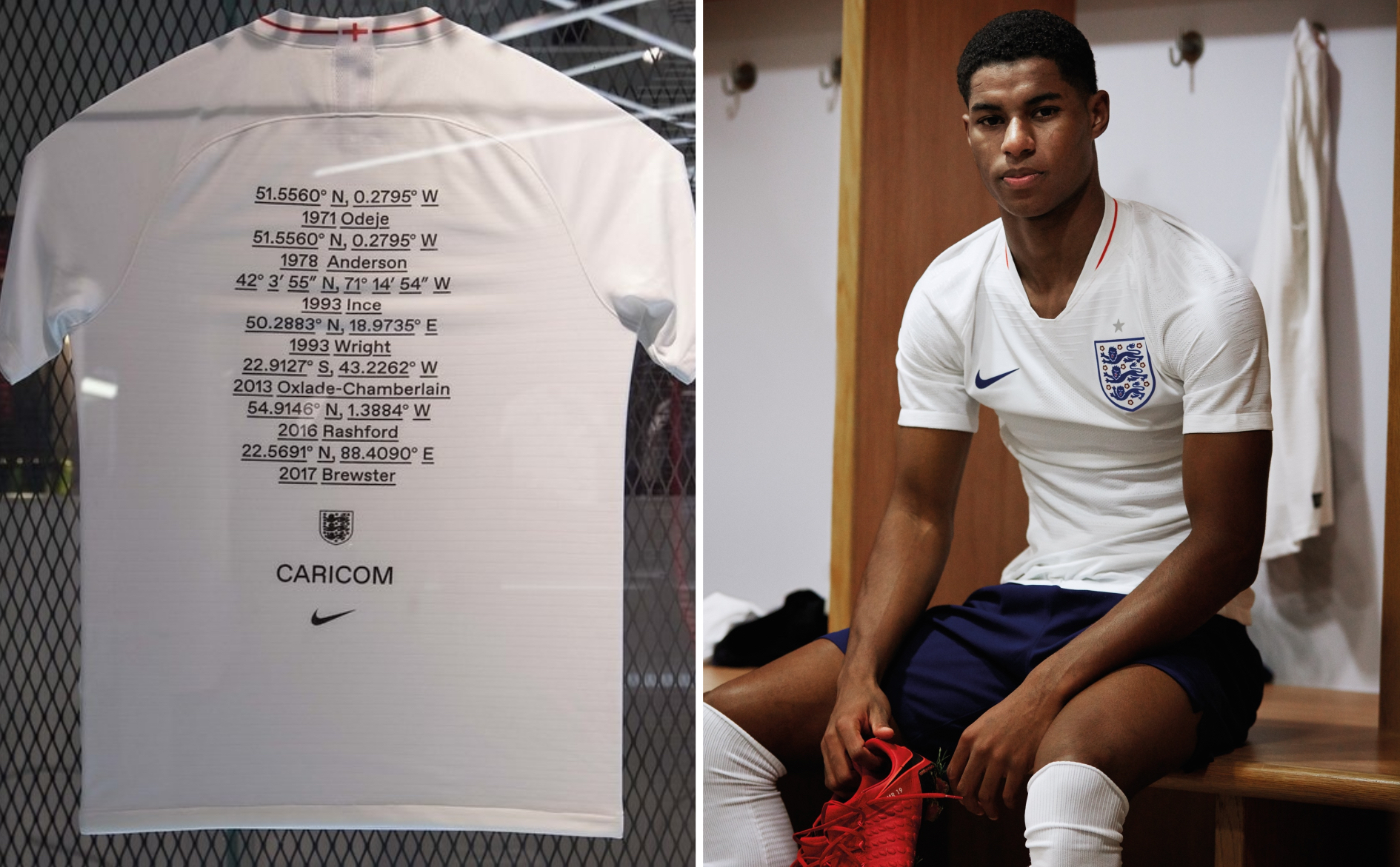 In case you didn’t know, England are heading to the World Cup in just under three weeks time. Gareth Southgate has selected a new batch of hungry, young players desperate to light up Russia this summer. As the anticipation slowly begins building up across the nation, Nike have created a project that shines a light on some of the artists, athletes, fans and communities inspiring the next generation of talent that will be shaping the future of the sport.

The ‘White Shirt Project’ has been set up by Nike Football – in partnership with Tottenham Textiles – to shift the emphasis from the players to the fans making a diverse cultural and social impact in the English game. To do this, Nike identified eleven fearless and football-focused communities, athletes, artists and fans and asked them to share their unique stories by creating their very own one-of-a-kind England shirt. 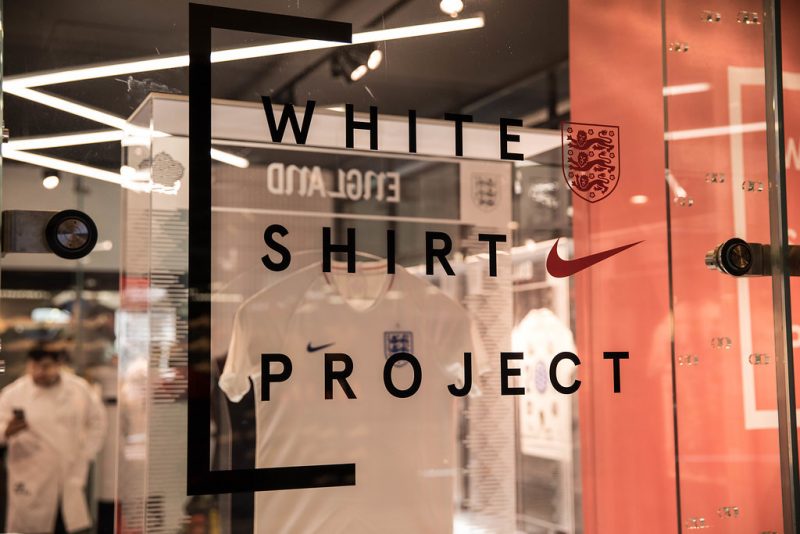 Caricom Magazine is one of the freshest, yet most important participants, to create a jersey for the ‘White Shirt Project.’ Caricom’s objective is to look at football through the lens of the black experience. Set up with his graphic designer friend Shawn Sawyers, the publication has evolved from founder Calum Jacobs’ initial essays into a well-executed magazine that focusses on unrestricted and undiluted stories from a black perspective.

Having undertaken an important role in challenging whitewashed narratives that the majority of British football media propagate, Caricom’s shirt showcases a lineage of black players who have made an impact on the England team. Each name is printed along with an historic date on the jersey recognising a respective milestone. From Paul Ince becoming the first black England captain in 1993, through to Rhian Brewster’s Golden Boot-winning antics at the U17 World Cup last summer, the shirt celebrates the past, present and future of England trailblazers.

We caught up with Caricom to get to know more about their magazine, their motives and their views on the new wave of young, black footballers who are set to be the nation’s brightest stars in years to come.

VERSUS: Tell us a little bit about what Caricom is about?

Caricom: Caricom is about the intersection where the black experience and beautiful game intersect. We try to mediate the game through that lens and talk to you about misrepresentation, underrepresentation and stereotypes that are inherently a part of the game. We deconstruct these narratives by critiquing them and taking them apart so that they’re no longer there.

Talk us through the symbolism apparent on your shirt, and why you decided to integrate each detail.

It focusses on the black players involved and their impact on the team. Obviously, they had to be really unafraid to pull on the shirt in times where it would have been hard. I think speaking to Andy (Tottenham Textiles), he knew we’d produce something that would fit that narrative for what this even is all about.

The lineage on the back of the shirt symbolises a particular moment in time for black players, whether it was a cap, goals scored or captaining the country.

Caricom evolved from your initial essays on black representation in football?

The magazine came out in October and most of those essays are compiled and published in issue one, with a lot of artwork and photography alongside that to complement the essays. Basically, I’d been writing about identity, race and culture, but couldn’t really pitch the work to any magazines that were out, because I felt that the editors wouldn’t really want that, or they wouldn’t handle it the way I would want them to.

I just felt like it made sense to do my own thing where I could say whatever I wanted to say without my creativity being limited or restricted, without mediation. 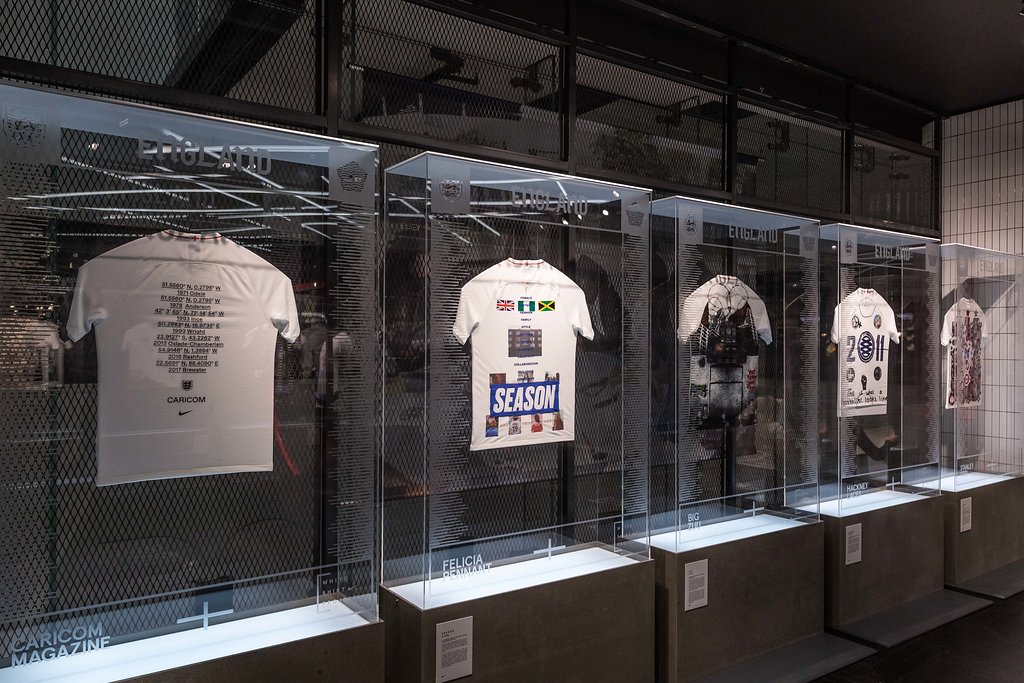 What have you learned since starting it?

Actually looking at the magazine now and feeling like I’m proud of it, and that it’s saying something important and impactful is also sick. Communicating a message consistently is another great thing too.

Rhian Brewster is someone you’ve included on the shirt. What are your thoughts on the way his situation has been handled since he came out and spoke about racist abuse in the game?

I thought it was sad he has to take on that pressure himself – when I was 18, I didn’t have the composure or maturity to speak to a journalist in a position like that. He wasn’t overreactive or didn’t come across as angry.

Whilst I think it was great that he spoke out, I don’t think that the way it was handled after his interview was published has been surprising. I don’t know what is going to bring about a change in that systemic approach that they have – which is either dismiss it or fine the club whatever amount – but I think you need to change the people who make the decisions at the top level. The onus shouldn’t be on an 18-year-old kid to change, it should be on those at the top.

Do you think by the time that U17 squad grows up and become seasoned internationals, societal attitudes will have changed?

No. When France won the World Cup in 1998, the politics of the country tried to make it black, white and Arab. And when they won it was great. But when they lost, it became an immigrant issue. And then “they weren’t French enough”, “they didn’t sing the national anthem”.

So it becomes dangerous when you intertwine football and politics like that and saying societal change can be engendered by the on-pitch success of the team. I think they should just play, and if people’s views are shaped by the way the players are playing then that’s great, but on the other hand, if they don’t play well, are we saying that their attitudes are gonna be changed by that? 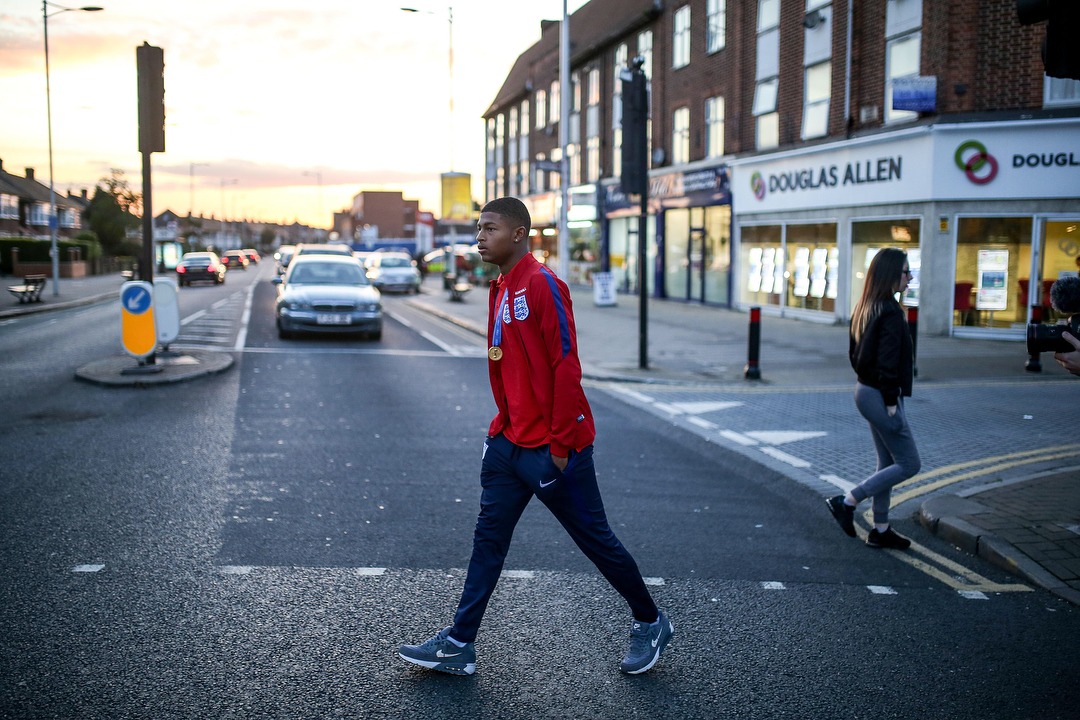 What does the next issue of Caricom have in store?

The second issue is mad. I’m excited about people reading it. With the shirt, our names aren’t on it, and no disrespect to anyone else, but we’re really trying to educate people with the magazine.

We have a lot of sick people who aren’t gonna charge us for their help with the next magazine because they believe in what we do. People have reached out to us rather than us chasing, which is nice – for instance, I had no idea you wanted to interview us today.

It’ll be a lot bigger, too. There’ll be more voices from more established writers, photographers that have done some work for some big projects. We’re just proper excited for everyone to see it.

The 11 designs are part of the White Shirt Project, which will be featured as part of an exhibition from May 25th – 31st in the Cube at on display at Nike Town London.