It’s been a minute since we’ve heard from Stormzy, but you best believe he’s been busy. After selling out his GSAP tour all over the world, the gospel-meets-grime LP went certified Platinum earlier this year, furthering its status as a modern UK classic.

The 24-year-old is continuing to carve out greatness on his own terms. Though jokey and tongue-in-cheek by nature, the seriousness in which he is treating his craft has seen him deactivate his Twitter – and he’s also adamant there’ll be “no time for appearances on Love Island this summer” so he can focus on music.

Despite no longer being active on Twitter, we all know how much weight his voice holds in the culture, with his every move scrutinised by the media. And Stormzy – much like Raheem Sterling – knows that becoming a successful young black man in Britain can actually bring increased marginalisation from some quarters of society, including the tabloid press.

But that isn't where Big Mike's link to the beautiful game ends. From his Pogba announcement video to counting the likes of Rashford and Lingard as his bros, the Croydon MC’s relationship with football has always been visible.

Rashford and Lingard in particular will play a large part in England's World Cup journey this summer, and Stormzy has also struck up a friendship with a future Three Lions star in Rhian Brewster. He became one of the Liverpool striker’s biggest supporters when the 17-year-old, who he labels as “wise beyond his years”, showed an incredible amount of courage and maturity when confronting racism in Russia earlier this year.

Stood outside the adidas Creator Base next to his Mercedes G Wagon and head-to-toe in the same brand which he’s been backed by since the beginning, Stormzy gave us some rare interview time ahead of England’s World Cup opener, where he discusses his hopes for the new breed of Young Lions, why he wants to see Mo Salah play for Manchester United and – most importantly – his vision for his second album. 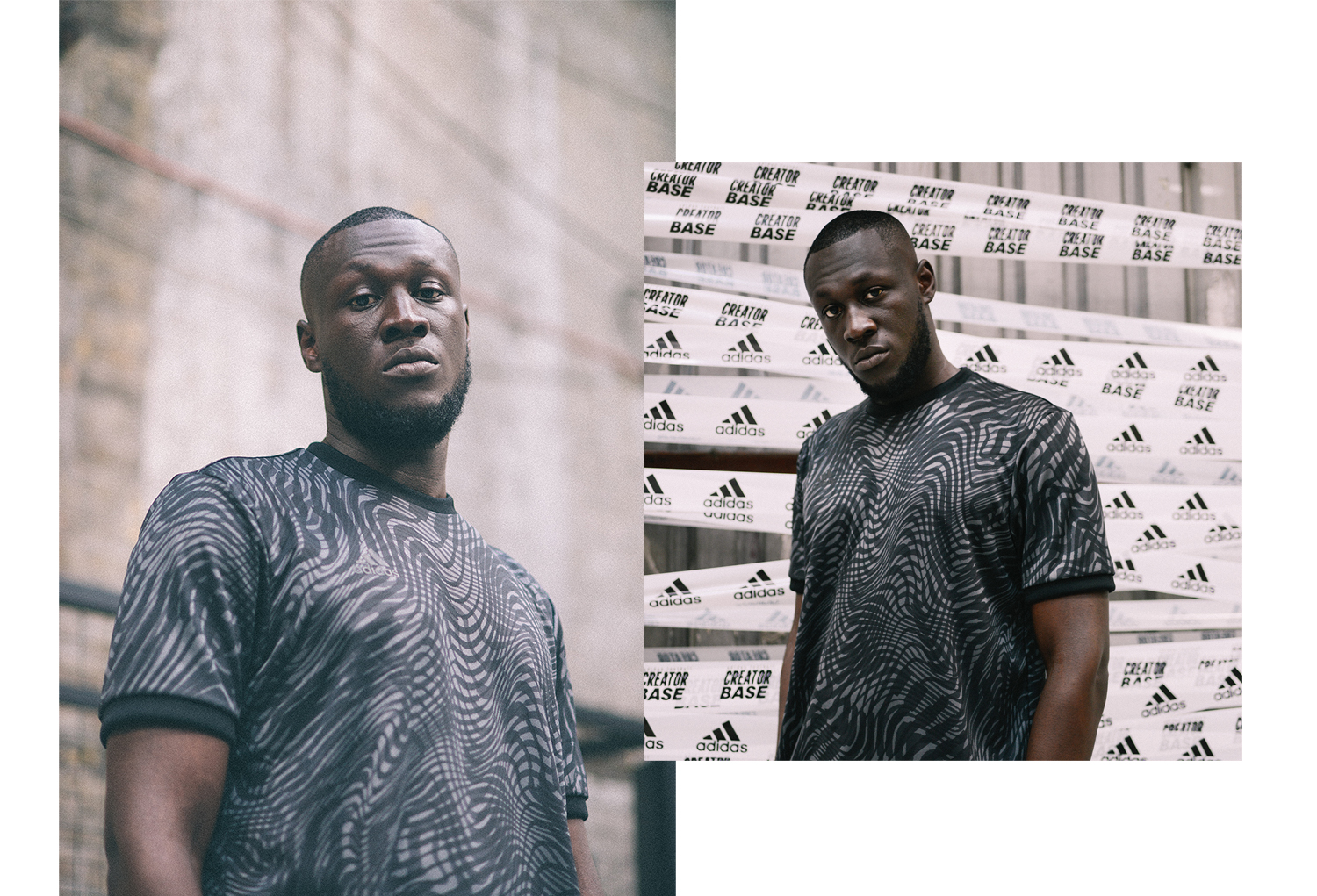 VERSUS: You’ve been supported by adidas since the “fire in the park” days. What’s it been like working with them over the years?

Stormzy: It’s been a very beautiful journey. Apart from me being a musician, the one thing that’s been consistent and constant is adidas. They were the first brand I ever worked with, and for a major brand to back me like that back in the day was incredible – it was a mutual thing as well. They reached out to me, but I reached too, and we met in the middle. It was one of the most organic relationships I’ve ever built to this day.

You’re a massive United fan but it’s World Cup season now! Are you a club over country man?

Argh that’s a tough one (laughs)! You know what yeah, it’s Ghana over everything. Club over country? I would normally say yes – but this is the most hopeful I’ve ever been with an England team with the young boys coming through. We’ve got Lingard and Rashford coming through, and all the new school, the new boys…if I’m going to trust any England lot, it’s you.

So are Jesse and Marcus your boys then?

Yeah they’re my bredrin, still. Jesse, Marcus…and Paul is my bro, too. But the nicest thing about them man is how humble they are. When I first met them, I was proper star struck, like “oh shit, you lot are the United boys…” but then I forget, some of them might listen to my music, so it’s a very mutual love.

You always forget, you see them every weekend badding it up, but they’re just young bruddas, just like man. So when you see them, and have a conversation with them, you realise they are just like me and love the same things as I do…so it’s all love man.

If you were in charge, would you be starting both of them at the World Cup?

100% – both of them should be starting. Do you know what it is? This is gonna sound like the corniest shit I’ve ever said, but the youth are the future. They’re going to be playing in the next two or three World Cups, so get them playing now.

What’s your first memories of the World Cup growing up?

Oh I could have sworn it was in Brazil! But yeah, that’s because Brazil badded it up that year. I remember I had the World Cup book with all the Brazil stickers – and obviously Ronaldo. I was so gassed on them! He was the sickest player, you can’t forget that haircut. 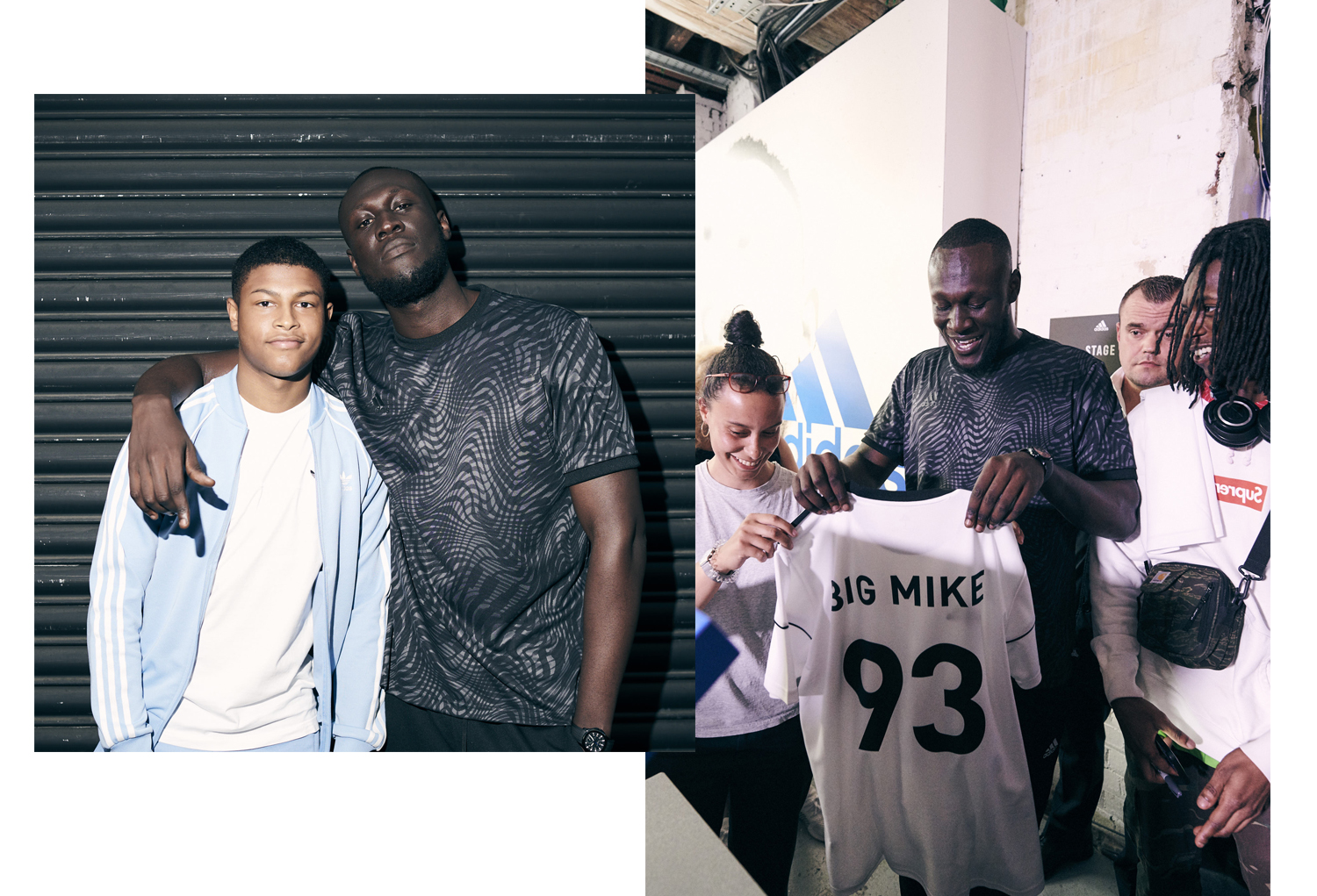 “All Sterling does is mash up the pitch, provide for his family and do what any young bruddah at his age is doing.”

Moving on to some of the stars at this World Cup, there’s another adidas guy I want to focus on: Mo Salah. Both your approaches to your respective crafts are deeply rooted in spirituality. Do you rate what he’s done for the perception of Islam in the UK?

Do you know what it is with Mo yeah, apart from the team he plays for – we’re not even gonna talk about that team – but see him, as a human, in life, he’s just a sick guy. He’s always smiling. He gets on the pitch and he loves what he does. I’ve seen interviews when he’s asked to talk about other players, and he doesn’t want to talk about them badly, it’s just all fun and that.

Humble guy, bangs his goals…I was like, bro, you’re just keeping it quiet, laughing in the process and just mashing shit up! That to me is the hardest shit, bruv.

He needs to come, bruv! He would be so cold for us.

In the run up to the World Cup, the coverage that Raheem Sterling has received from the media has been much discussed. You’ve been on the end of similar treatment from the press yourself, what do you make of what’s happened to him?

See with the Raheem thing – this is mad still, because what I might say now is gonna be used against me. Like “Stormzy says this about Sterling” and all that, because there’s this whole narrative and agenda against people like us. All Sterling does is mash up the pitch, provide for his family and do what any young bruddah in his position at his age is doing, which is…sometimes he has a party, sometimes he buys his mum a Range Rover. He’s not done anything wrong. He’s guilty of being nang, bruv! Guilty of being young, black and successful. 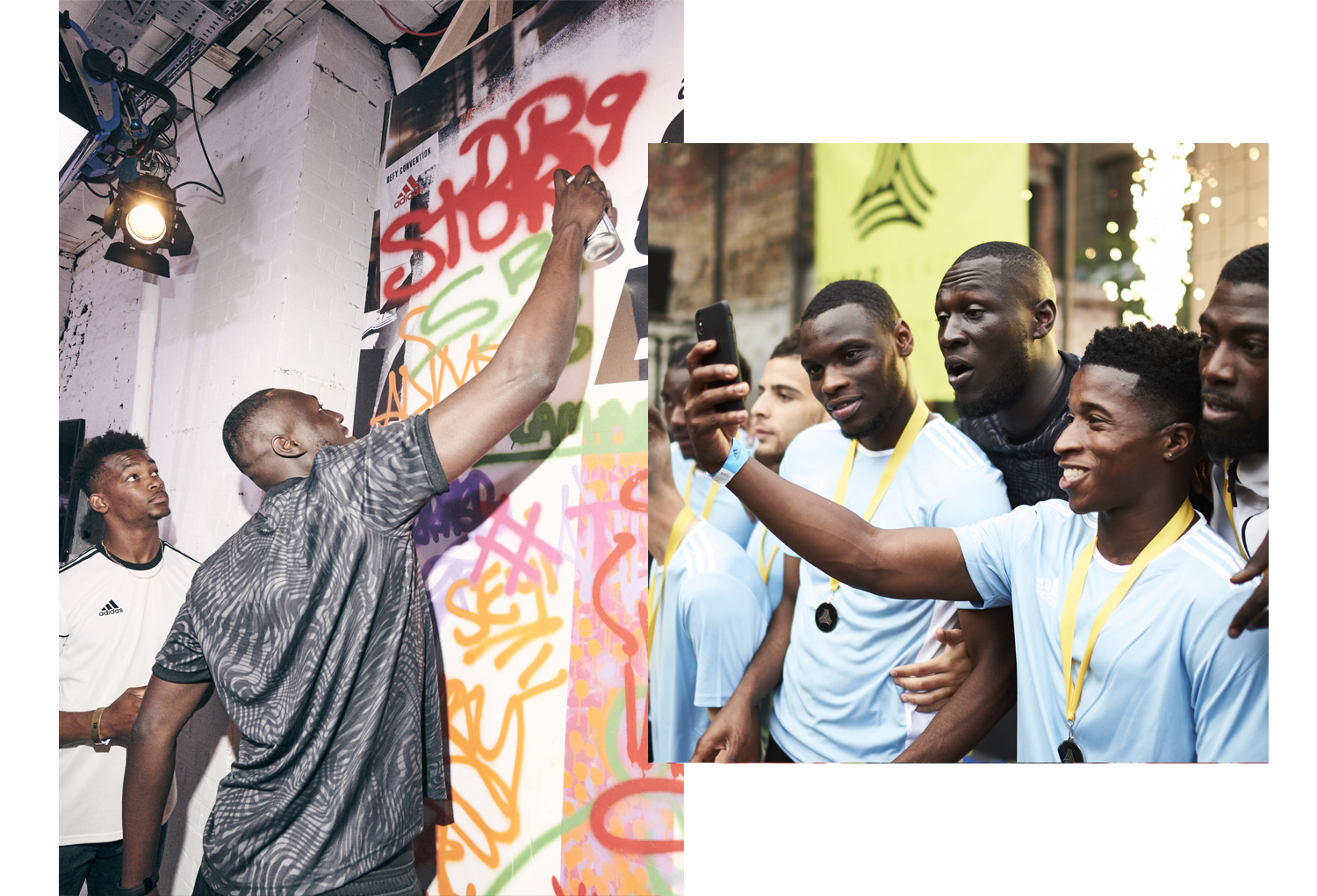 “There’s music coming soon. All I know is that it’s going to be cold.”

Another young, black player on the up that you’ve come out and supported is Rhian Brewster. Do you believe there’s still work to be done by the likes of UEFA and FIFA in combatting racism?

100%. The lot of them are very, very poor bruv. The way they deal with it and the steps they take to combat it, it’s like nah – you lot don’t take this seriously. Even with the Rhian thing, that’s serious. As a younger, in that position, his amount of patience, courage, strength, and wisdom was way beyond his years.

I couldn’t trust myself in that position. I might have reacted worse than he did. The level-headedness he showed was crazy for someone his age. On top of that, he can’t rely on UEFA or the FA to help him out in that scenario at the moment. So they really need to fix up – they’re not hard on racism at all, bruv. This World Cup should be a chance for them to prove that they are. They need to put their foot down.

On to music, it’s been over a year since GSAP released. Have you been working on music the whole time?

I always try to stay working on music and there’s some coming soon. I was touring a bit, and then doing some promotion and recording some stuff too. It’s that whole process as an artist you need to go through. You have to experience things, you have to go through it to produce new music. And then boom – album number two.

What are the sonics gonna sound like on this one?

See me yeah, I like to think I’ve created a spirit around my artistry. I’m a free artist, I’m an artist who makes the best possible music, regardless of genre, regardless of sound. And whatever I’m going through, whatever I’m feeling, that’ll all be channeled correctly, sonically. And I don’t know what that’s gonna sound like.

GSAP sounded like GSAP because it was what I was going through at the time. With the next album, all I know is that it’s going to be cold. That’s your job as a musician; take what’s inside you and make it the best thing you can listen to.

Stormzy was speaking at the adidas Creator Base. For more information, visit adidas.com/football.