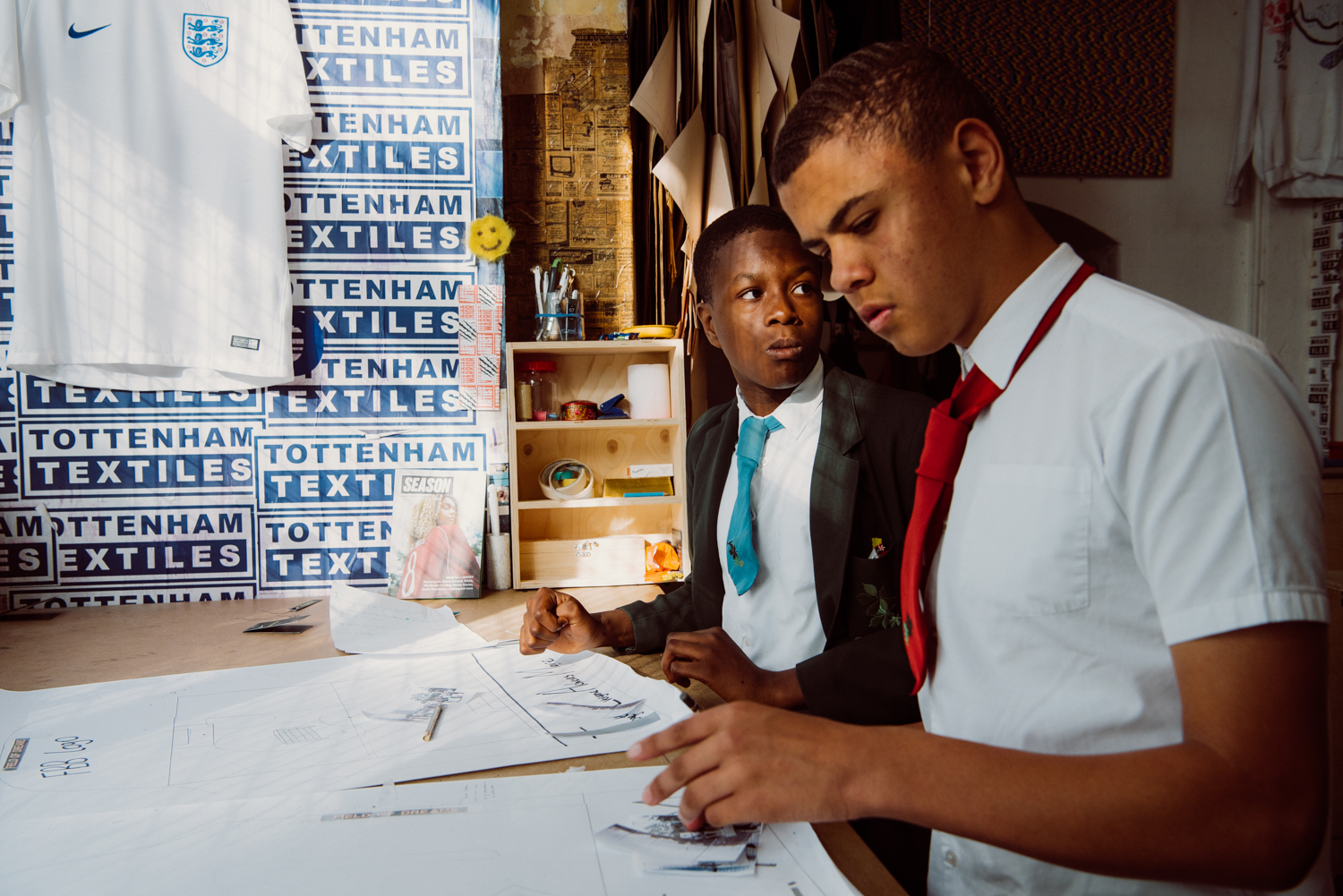 Football Beyond Borders uses football to support disadvantaged young people. Tackling poor behaviour, academic performance and inequality, the collective’s mission is to ‘level the playing field’ for young people with limitless potential through the medium of the beautiful game.

The education charity works with over 400 young people each week, where they use the sport as a catalyst to empower participants with the skills, attitude and opportunities to achieve their life goals. Whether it’s via FBB Schools – a football-led curriculum delivered to schools across London – or FBB TV (a youth-led media platform that lets young people work with stars of the game), FBB is a charity that’s calling on the power of football to improve lives off the pitch.

The charity was recently recognised by Nike and called in to be part of its White Shirt Project, which saw the UK’s community leaders design a one-of-one England jersey. We caught up with Jasper Kain and Joseph Wafta of FBB to understand why football can inspire positive change. 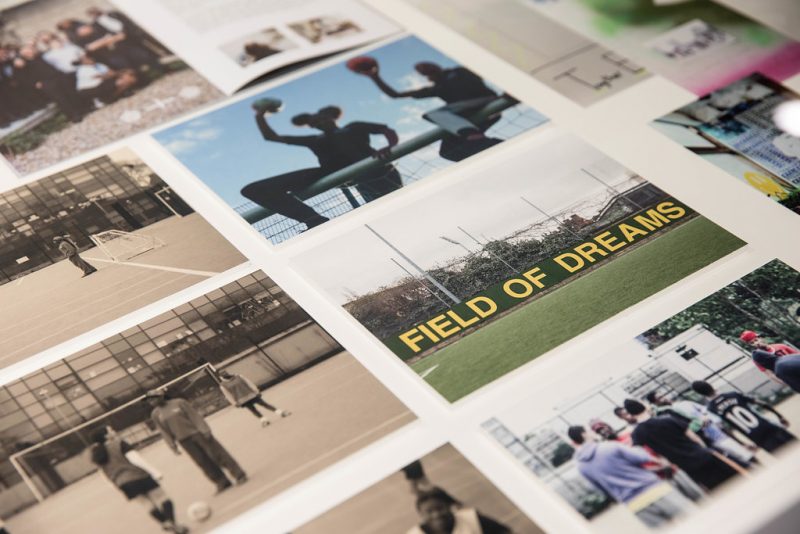 VERSUS: Tell us what Football Beyond Borders is all about?

Joseph: We are an educational charity and a youth-based movement, based in London. We work with young people who are full of talent. They are generally passionate about football but aren’t necessarily achieving their potential. Typically within school, in particular, they may be underachieving in some form, or just not happy with how some things are going.

Jasper: We come in and we say ‘you love football, we’re gonna work with you every week, we’re gonna build bonds, we’re gonna build relationships that will enable you to grow both in an educational setting’ – so supporting them through educational projects and getting them behaving better in school – but also just to be able to develop as a person, so they can have healthier relationships with their peers, with their elders and allow them to realise there’s a world outside of school, so they can go on and make strides and have make better opportunities for themselves.

How did working on the White Shirt Project come about?

Joseph: Sometimes with brands, they treat young people like accessories. We’ve become a bit tired of that. If you treat young people like commodities, there’s nothing really lasting, and no-one is tapping into their own creativity. So when we saw this project, we were like ‘wow, this feels different’. This was a unique project brief to us and we can tap into young people’s story-telling, and we can promote a group message and community – we wanted to talk about the FBB story rather than a certain individual. 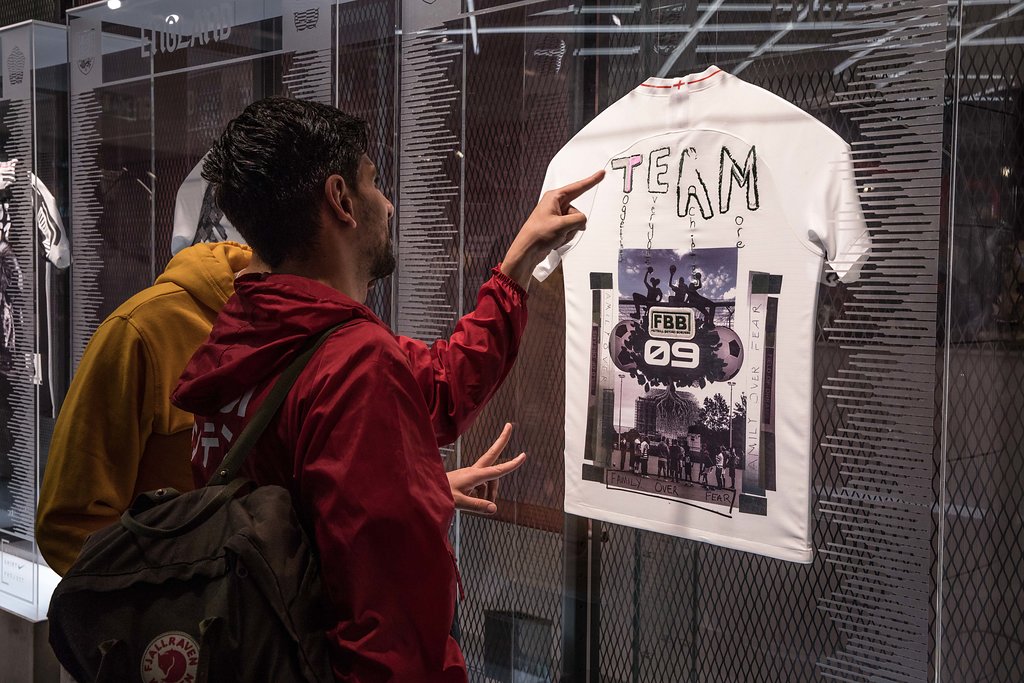 When Nike pitched it to you, did you feel like their goals aligned with your project?

Jasper: Yeah definitely. Number one was the chance to tell the stories of kids whose story is seen but never really heard, or always spoken about and never for them. The opportunity to give some of our most gifted young people the chance to tell their stories – that was really important to us.

Joseph: As well as that, for me, growing up in England, when you have multiple identities growing up around you, the England shirt has come to represent a certain section of society. But then a lot of the young people today can look up to the squad today, at players like Lingard, Sterling, Rashford…I really liked the fact that Nike were reaching out to communities which had traditionally been left out of what the shirt may have previously embodied. 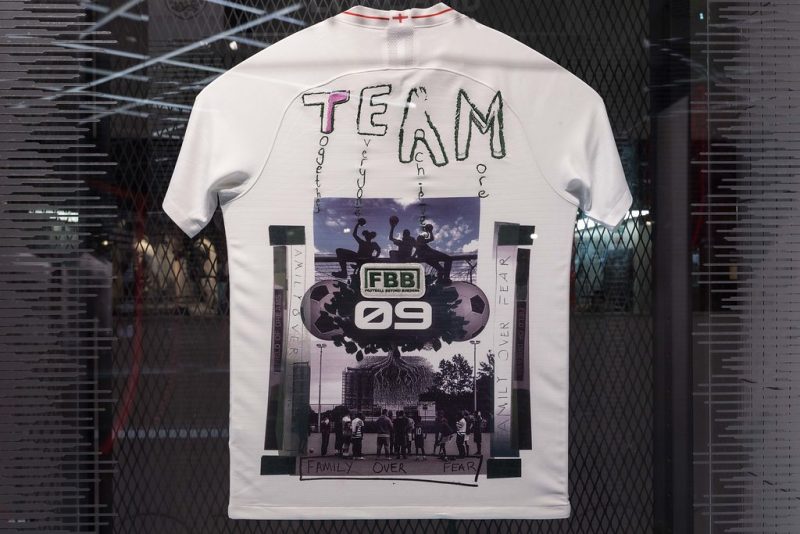 Talk us through the symbolism apparent on your shirt, and why you decided to integrate each detail.

Jasper: So we didn’t actually decide on the details of the shirt – the young people we worked with did. We showed them the brief, and we fed in some of the ideas relating to the journey of FBB.

But in the bottom left of the shirt, that’s the first community center we used in London. Then the trees represent growth and knowing that everything starts from somewhere and can become something big. The estates we used to break the stigma towards them, and for the kids to be proud of their communities. The girls we included to challenge the notion that football is a “boy’s sport” – with FBB we work with girls and boys, football is for everyone.

Joseph: We used the motto ‘Family Over Fear’ to resonate with the ‘Fearless’ part of the project’s brief. When you have family, you can overcome it. The pitch around the outside, we used to highlight the aspirational side of the game – when you step out onto the pitch, anything is possible. And then the numbers 09…we obviously started FBB nine years ago. The number 9 as well symbolizes the striker, which representing achieving goals.

So over those nine years, what have you learned since then?

Jasper: Firstly, for me, it’s all about the collective. FBB is built on passion and supporting one another, and that for me is at the heart of everything we do.

Secondly, life’s a journey. There’s been tough times and moments when we’ve questioned why we’re doing it all. But ultimately, young people have an immense ability to develop and grow – and it’s a blessing to work with people at this stage in their lives.

And thirdly, have a vision. If you believe it can affect somebody, and you’ve seen the results, don’t ever stop believing it can’t be done. The number of times where we’ve been told: “this already exists” or “these young people can’t be helped” or “we don’t have the funding”…ultimately if you’ve got the vision and stick to it you can achieve it.

So have you been knocked back a lot since starting FBB?

Jasper: At times. We were in a youth centre recently, which got turned into luxury flats. We’ve had instances where young people have gone off the rails sometimes. There’s a lot of glitz and glamour with football and it sometimes doesn’t always go down to the grassroots. We try and take every young person on a tour out of London every summer, and not everyone can afford that. There have been challenges when people have got homesick, and having to undertake some crisis management…

But over the years of experience you have in this now, you must be well versed in dealing with these challenges…

Jasper: So we started in 2009, but we’ve been a registered charity since 2014. Before then, it was a student movement, but the concrete structure of FBB began in 2014. And we feel like we’re much better equipped with our experience since then to deal with setbacks and progress forwards even more with what we’re doing. 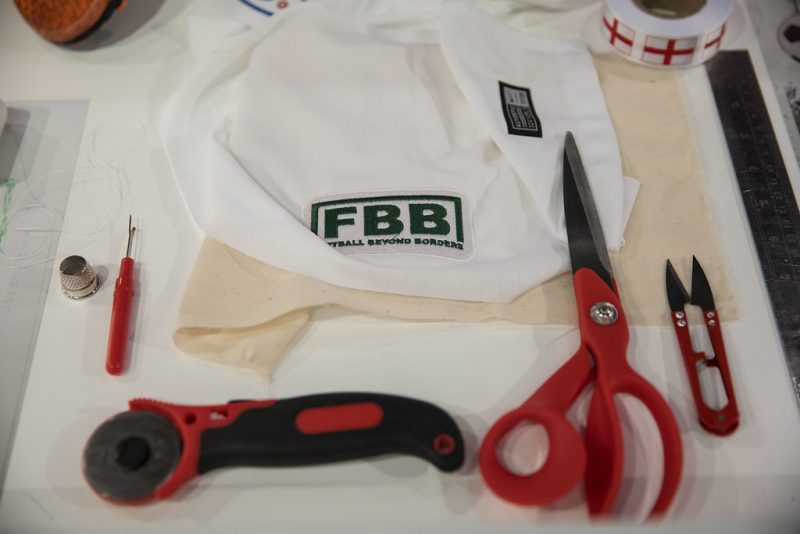 Find out more about Nike’s White Shirt Project in an interview with another participant, Caricom Magazine.