In the past 12 months, Rhian Brewster has risen up to become one of the most influential names in English football – even though he's yet to kick ball at a senior level for the first time.

The teenage striker started making waves during England's history-making FIFA U17 World Cup campaign, shutting down Twitter after scoring successive hat-tricks against USA and Brazil in the tournament's latter stages. Brewster's performances went viral and another goal in the final secured him a Golden Boot and a World Cup winners' medal to bring back to Chadwell Heath.

While football Twitter got lost in the hype, the Liverpool striker's next move was a significant moment for football, race and culture. Speaking to The Guardian, the 18-year-old detailed seven instances in which he or his team mates had been the subject of racist abuse in his career so far. Speaking candidly on the issue of racism in football – which is widely swept under the rug by the sport's governing bodies – is a brave move for a professional of any level, let alone one yet to make a senior appearance for his club.

With his performance on and off the pitch, Brewster is a game changer who's pointing towards a brighter future for English football. Rhian Brewster speaks exclusively to VERSUS, giving us the inside track on his story so far. 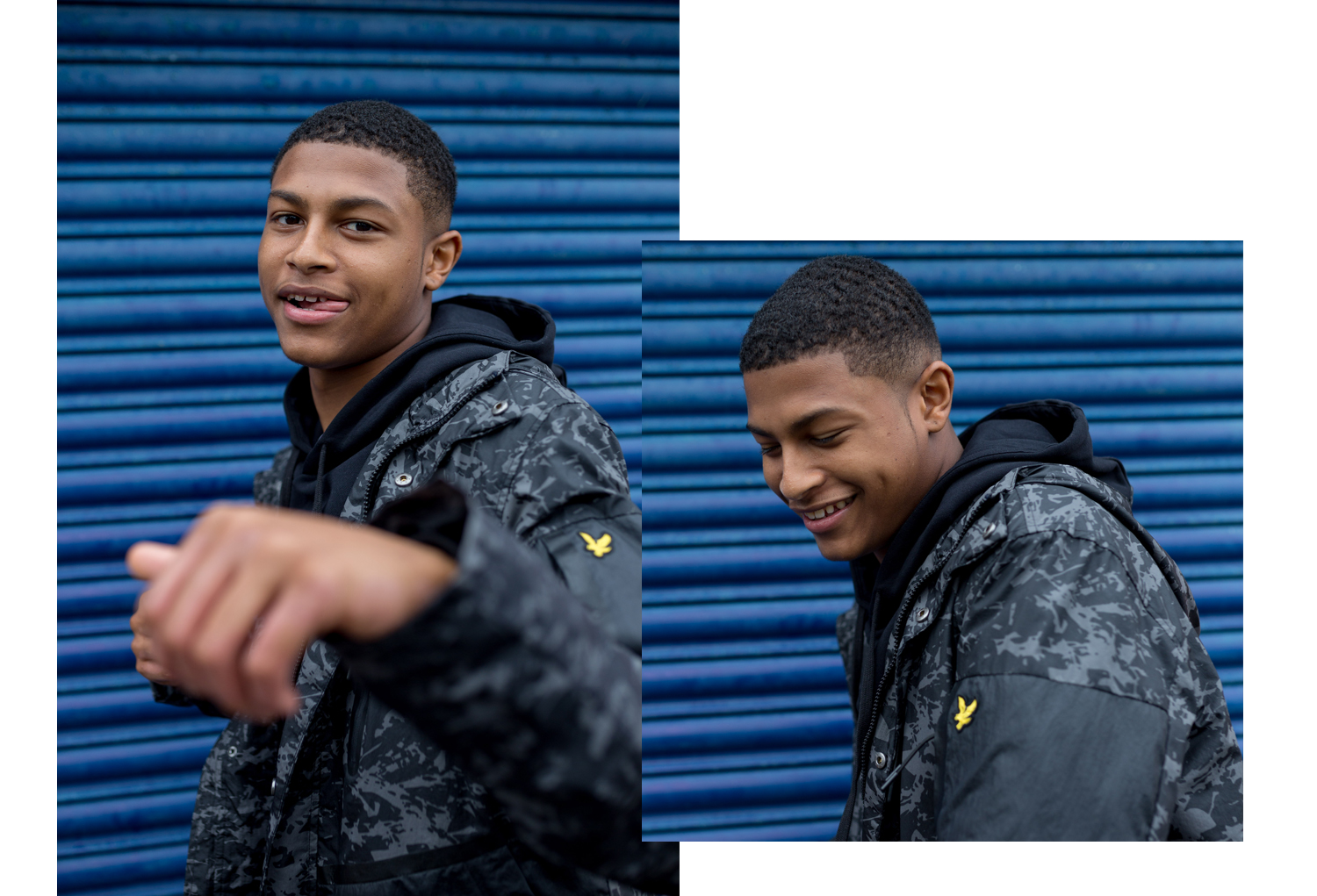 VERSUS: Taking it right back to the beginning, what are your earliest memories of football and who are some of the guys you used to idolise growing up?

Rhian Brewster: I remember playing Sunday League football and first getting signed for Chelsea but as a fan, I used to love watching Thierry Henry play and score goals – I started watching football at about seven or eight and he was that guy at the time. He’s the one that made me want to play football.

At what point in your life did you start playing for the first time?

Kicking ball in the playground was my first real experience of playing. I had an older friend – maybe two or three years older – and he was saying that he wanted to take me to Shield Academy when I was around six. I trained with them once and played with them after that.

I was just playing in a lot of tournaments with Shield and that’s when I got scouted. I chose Chelsea – they were the dominant team in London at the time – and I went into their development teams but in my first session they told me to go straight to Cobham, because I was too good for the teams they had there.

You made the move from Chelsea to Liverpool at about 14-years-old, which is a big move for someone to take when they’re so young. What were the motivations behind that call and how challenging was it to leave home?

It was a difficult choice. Obviously, at such a young age to move so far from home…I didn’t know if I wanted to do it but, ultimately, I’m here to be a professional footballer. I didn’t see a path into the first team at Chelsea and while lots of teams were an option, Liverpool presented the best choice for my career. 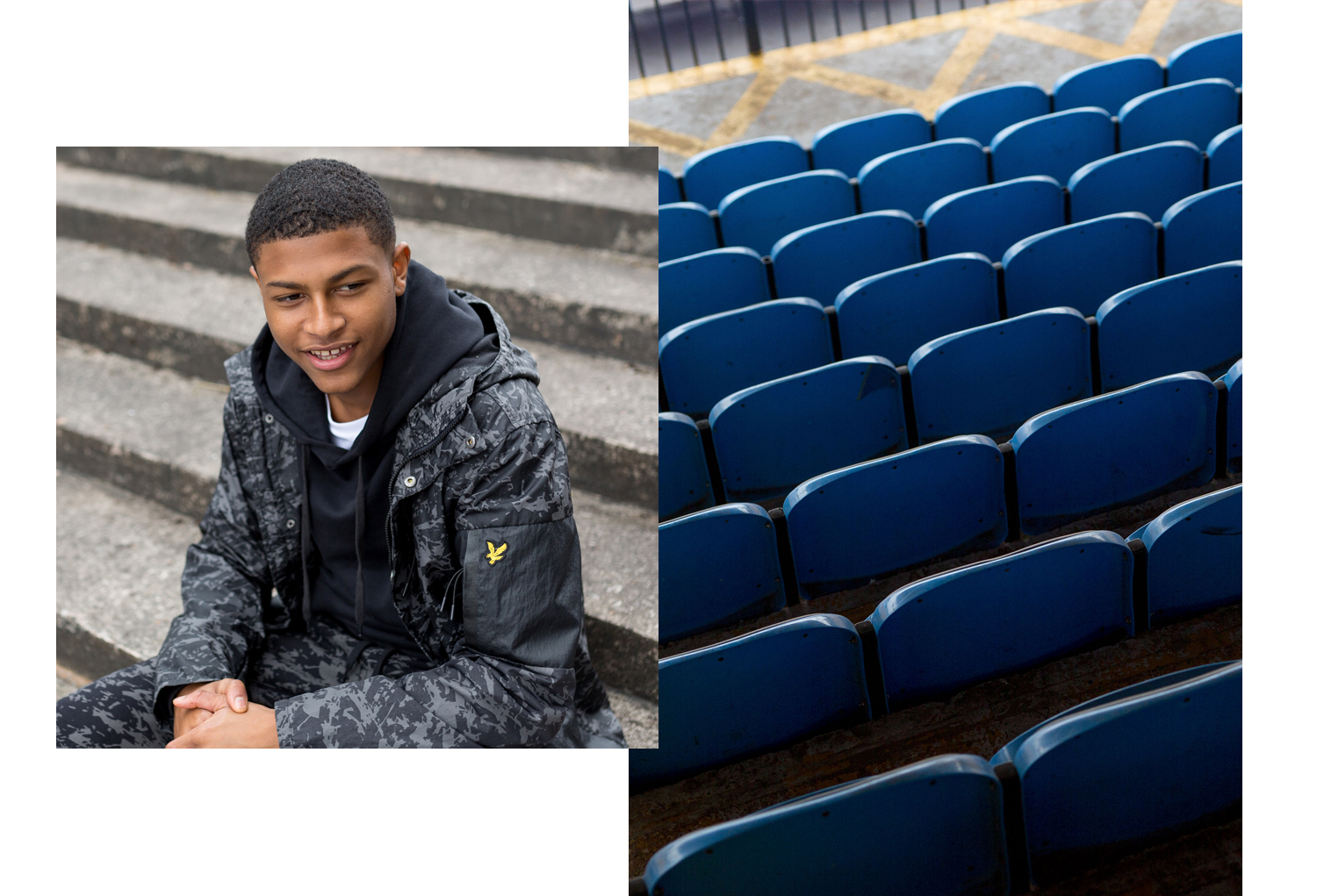 “I’d say watching and playing with Firmino has been huge – he’s a world class player.”

How are you enjoying Liverpool as a place to live?

It’s really good! It’s different from London. London is always busy but Liverpool can be a bit more chilled. It’s relaxed where I live. It feels very much like a family up here – it’s a family city. The people are amazing and everyone is very friendly and supportive.

You’ve obviously taken you game to new levels since arriving at the club. Who are some of the players or coaches that you’ve found to be most influential?

I’d say watching and playing with Firmino has been huge – he’s a world class player and the type of guy you can take things off to improve your own game. Mick Garrity (U23 coach) has spent a lot of time with me after training to work on my finishing…but when I was training with the first team everyday, it just made me a better player. I could feel the levels.

Yeah, what was it like to make that jump to training with the first team? As a young guy it must be amazing to work with players on that level…

Of course! It was hard when I first went up because it’s a big jump to the first team – technically, you see how good these players are. You couldn’t give the ball away and mistakes get punished. But it was amazing – they welcomed me in, it’s a very open squad.

You really made a mark on the game with England’s U17 World Cup win last year. On the whole, England are performing well at every level of the game right now…what’s so special about this new breed of young lions?

I think a lot of it is down to changing the way England play, all the way down to the youth teams. Clubs nowadays like to play out from the back and stuff – it’s possession football – and England national teams are starting to do the same. When we join up with the England team, it’s not all that different from the football we’re playing with our club sides and I don’t think it’s always been like that. It’s not completely different and we don’t have to try so hard to adapt to a new style of play like some guys did back in the day. England want to play football now. 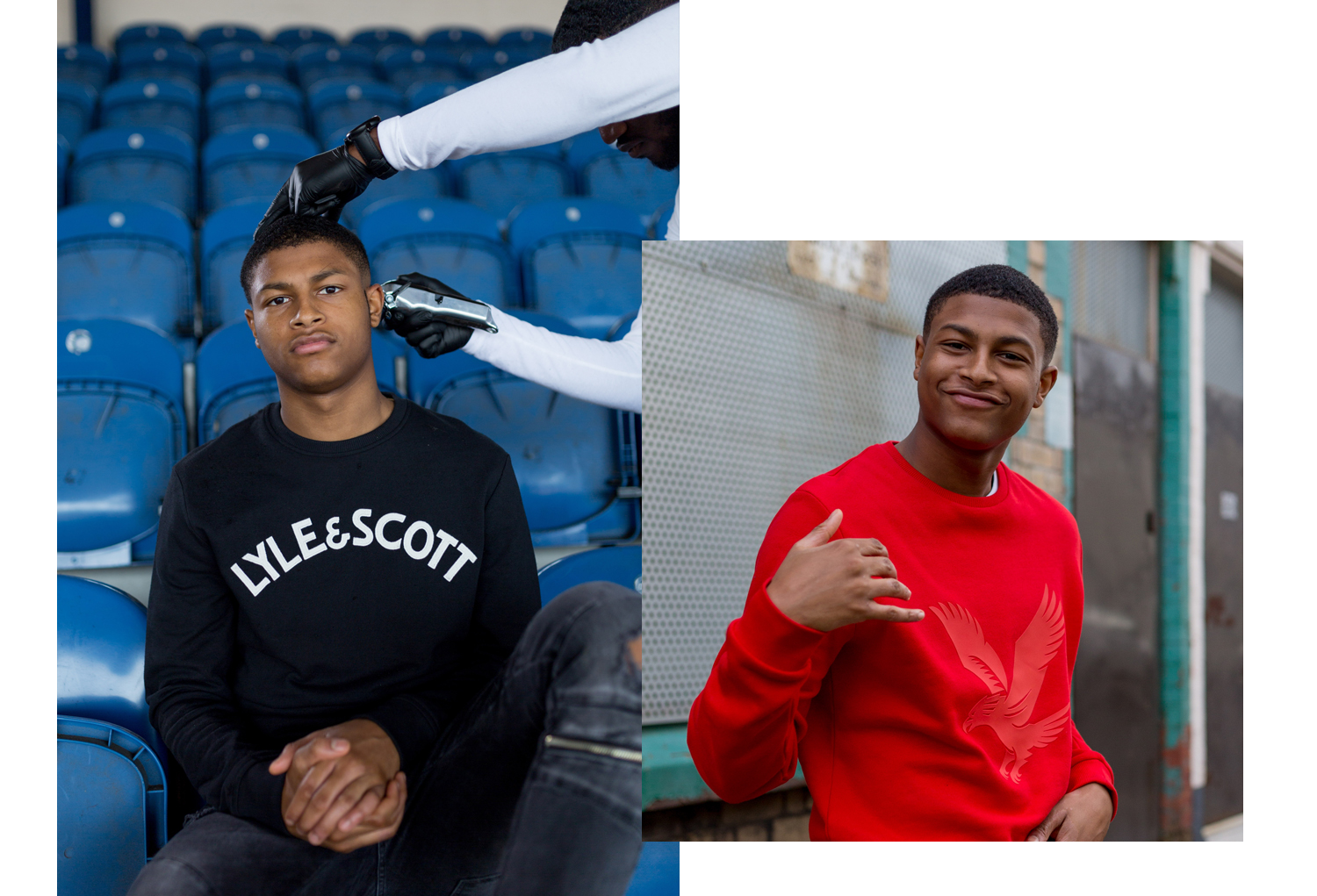 “If young players have to leave the Premier League and prove ourselves, I don’t think we’re afraid to do that.”

And there also seems to be a change in mentality too, young players appear more confident. What’s the attitude like in an England squad right now?

There’s a hunger and a real will to win. I think at club level, not a lot of us win trophies so when we come together for England we all want to win trophies and we believe we can. The whole England set-up is like a family, we all chill together and we want to win together. We’re not just doing it for ourselves.

We’re also seeing a lot more English players move abroad in search of first team football – that never used to happen. Why do you think it’s suddenly become more acceptable for young English players to choose transfers to Bundesliga or Serie A…

I don’t know – maybe back in the day English players were given more opportunities at their clubs but with the way the Premier League is now, it can be more difficult for clubs to give youngsters a chance. I think these players are looking at moving abroad to get some experience and show their ability, before moving back to the Premier League. The Premier League is still the best league in the world and everyone wants to play here. If we have to leave and prove ourselves, I don’t think we’re afraid to do that.

Winning a Golden Boot and a Winners’ Medal at the U17 World Cup last year…how proud were you to bring those accolades back home?

It was so big but being out in India for so long, we didn’t really realise how big our story was becoming back home. But as we got far into the tournament our social media started blowing up and we were getting messages from senior players and even Gareth Southgate, so we know something special was happening. We wanted to do it for our families and the whole of England – that’s what made the win so special. It was crazy.

There’s an amazing video where you bring your medal back home to Chadwell Heath for the first time. How did it feel to bring a World Cup win back to your local community?

The welcome back was crazy – the TV and press when we first came through the airport was mad, I wasn’t expecting it. And of course when I came back to my ends, I’m the only person that plays for my country so it was big to represent my area on that global stage. 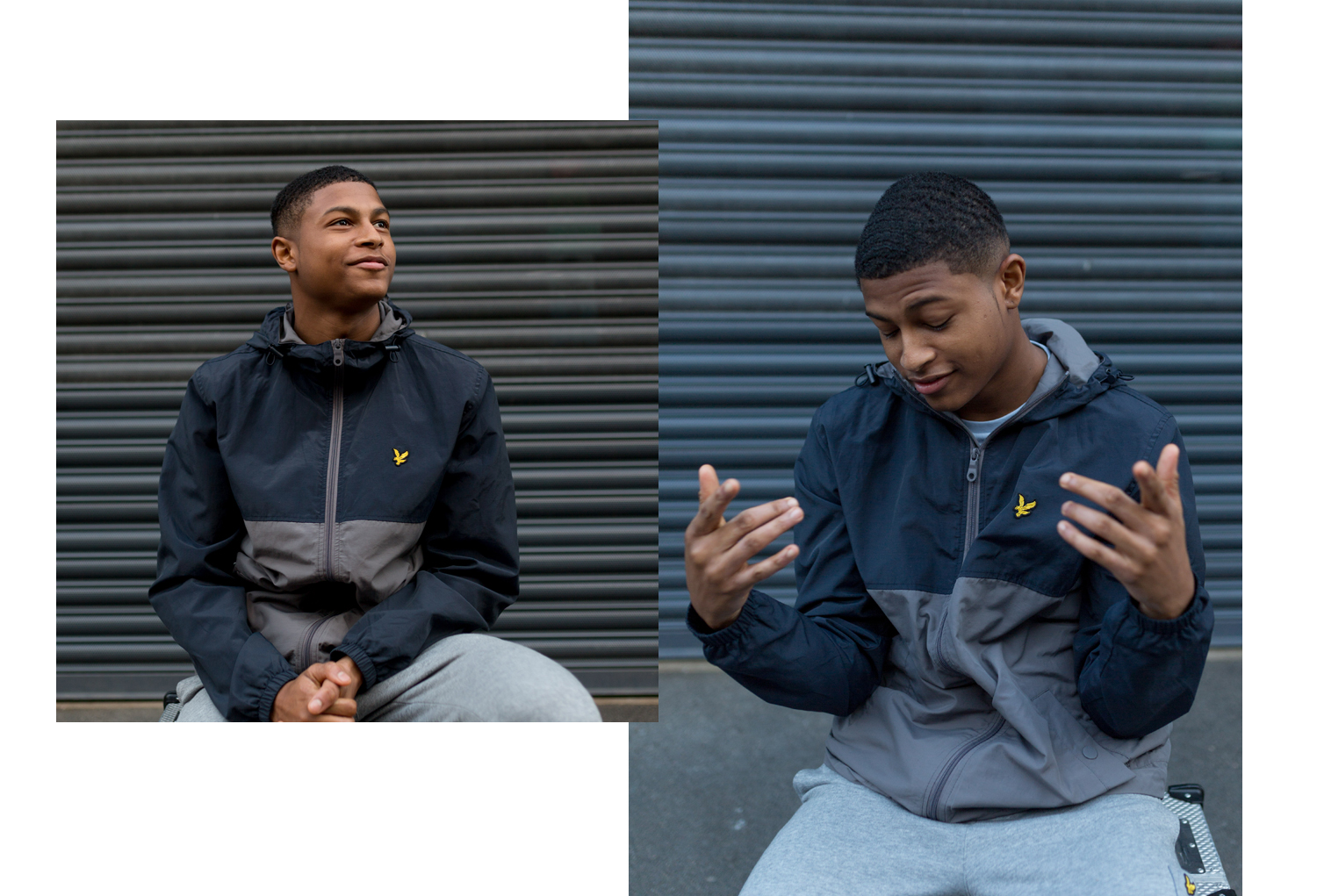 “The reaction was encouraging. It shows people here do care about racism in football.”

You also came out with a lot of credit for being so upfront in talking about the problems you’ve experienced with racism in football. What was behind the decision to tell your story and did you realise just how important it was going to be?

The most recent incident in Russia was basically the final straw because it had happened so many times. I spoke to Liverpool about doing the interview and talking about my experiences and they were with me on it, but said I didn’t have to do it if I didn’t feel comfortable – it was such a big thing to talk about. I said straight away I wanted to speak up, no holding back. At the time it didn’t seem like a big deal but obviously it was and I’m thankful to Liverpool for helping me to get that story out.

You received so much support on the back of that interview from the media, your club and fellow players – was that encouraging to see?

Yeah, the reaction was very encouraging. We obviously didn’t get the verdict that we wanted on the issue from UEFA but it shows that people here do care about racism in football.

You’re doing some bits as a new ambassador for Lyle & Scott right now. What’s your style like off the pitch and how important is your look to you?

When I go to and from training I like to wear a nice tracksuit but if I’m out and about I like to switch it up and move a bit smarter, I wear lots of jeans and jumpers. I always want to look clean. I love shoes – I need to stop! I’ve got about 30 pairs of trainers in my closet at the minute.

We’ve already got one eye on next season while the World Cup is still underway – what are you hoping to achieve in 2018/19?

I want to play some games for the first team, definitely.

Lyle and Scott are delighted to announce Rhian Brewster as their new ambassador. Rhian launches the new World World Cup campaign focusing on Rhian and his rise to U17 World Cup Champion and Golden Boot winner.