Welcome to ‘The Game Plan’ – a new content series in partnership with Umbro – that takes some of culture’s most influential new creators back to their communities, exploring how football influenced their journey to become a next gen game changer. Football is having a bigger impact on music and culture than ever before, and this series will find out why by speaking to people who are at the centre of this new wave. Danika Magdelena – a.k.a. Sirius Film – is one of the UK’s waviest young photographers, bringing her colourful and intimate vibe of portraiture to the country’s biggest ballers. She takes us to Islington and tells us why her artistic style is loved by this new generation of players.

Danika Magdelena is the photographer from North London who has built a rep for shooting football’s waviest portraits. Since first picking up a camera in college, Danika has shot ballers including Hector Bellerin, Reiss Nelson, Aaron Wan-Bissaka, Daniel Sturridge, Ruben Loftus-Cheek and more – establishing a softer and more intimate artistic lens that’s in contrast to a more traditionally crisp and clinical style of sports photography.

Despite growing up in North London – a stone’s throw from two of the country’s biggest clubs – football wasn’t a huge part of Danika’s early years and it’s this distance from the sport, along with a love of music and street culture, that’s led her to look at the artistic side of the game with a fresh pair of eyes.

We took Danika back to her home streets of Highbury and styled her out in Umbro’s new FIERA sneakers and items from the Projects apparel collection, before finding out how she’s changing how football looks one photo at a time. 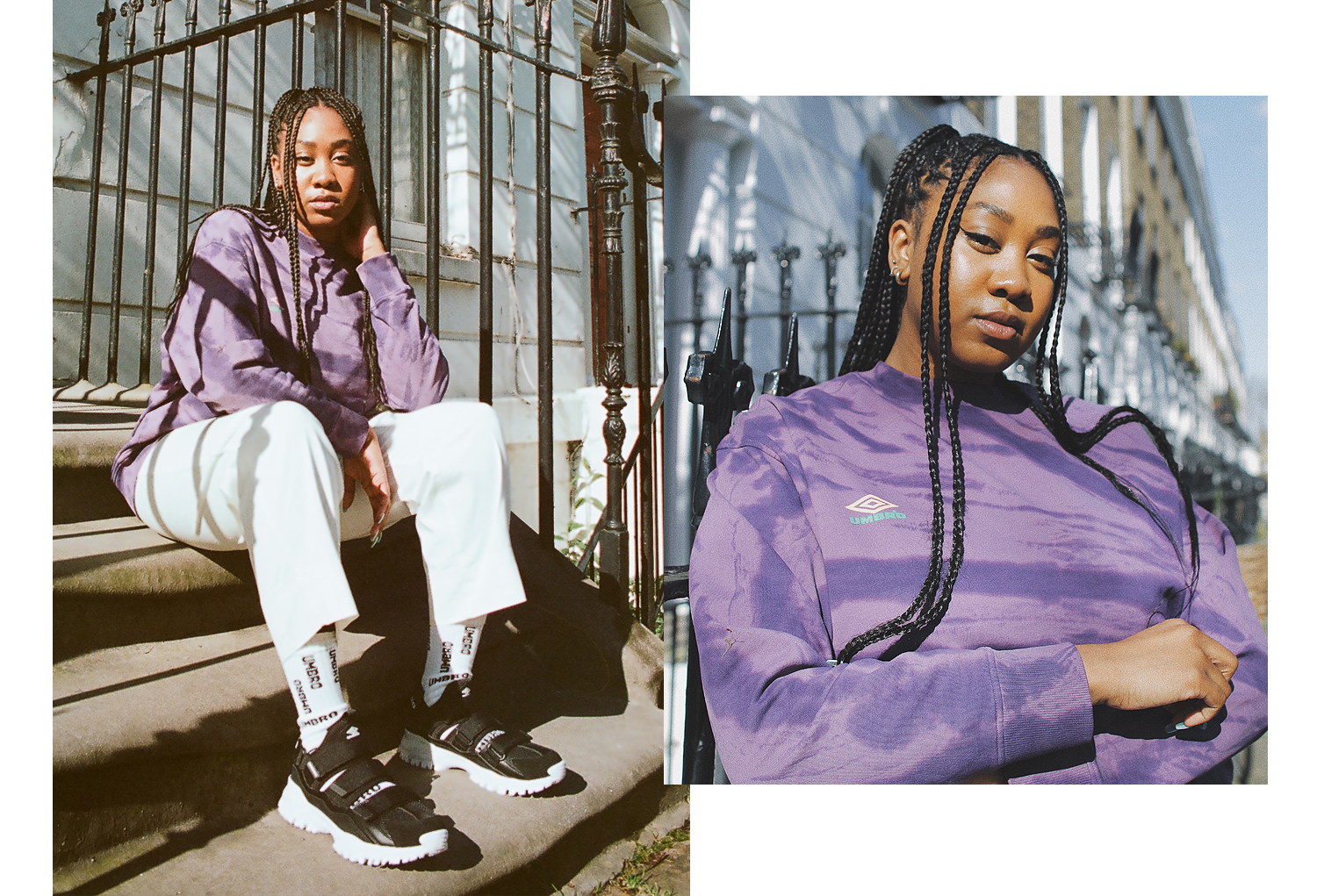 VERSUS: What role does football have in your life right now?

Danika: Football has always been there, but being a proper fan is quite new to me. It probably started with VERSUS and having the chance to shoot players…being around the game made me more of a fan than I was before. I was lucky enough to travel with Arsenal on their pre-season tour and I was an Arsenal fan by nature – I grew up in Highbury and the club is obviously so big in our community – but watching the team up close behind-the-scenes sparked my love for it even more. I think it’s really important to love the game if you’re going to work around it.

What aspects of the game do you vibe with the most?

The fan culture and togetherness of the game is obviously great, I love that it brings people together – but I really dig the competitiveness too. You’re always on the edge of your seat and rooting for your team to score – and I think the unpredictable nature of the sport definitely makes it sick to watch.

What was it like growing up in North London?

I love Islington! It’s a really diverse place and not just with race, but class too. There’s so many different layers to it, and I’m really happy to have grown up somewhere that’s made me open-minded. I’ve grown up with all kinds of people and all kinds of cultures, which has shaped my identity – I think that comes through in my work too, I’m very open and honest with the stuff I capture.

What are some of your favourite memories about growing up here?

Playing out! I don’t really see it in my area anymore and I’ve got a 10-year-old sister, she doesn’t really play out anymore…not around the estate. We had such a strong sense of community when I was a kid and it was always easy to make friends. Everyone texts nowadays and I don’t think people hang out in the same way. 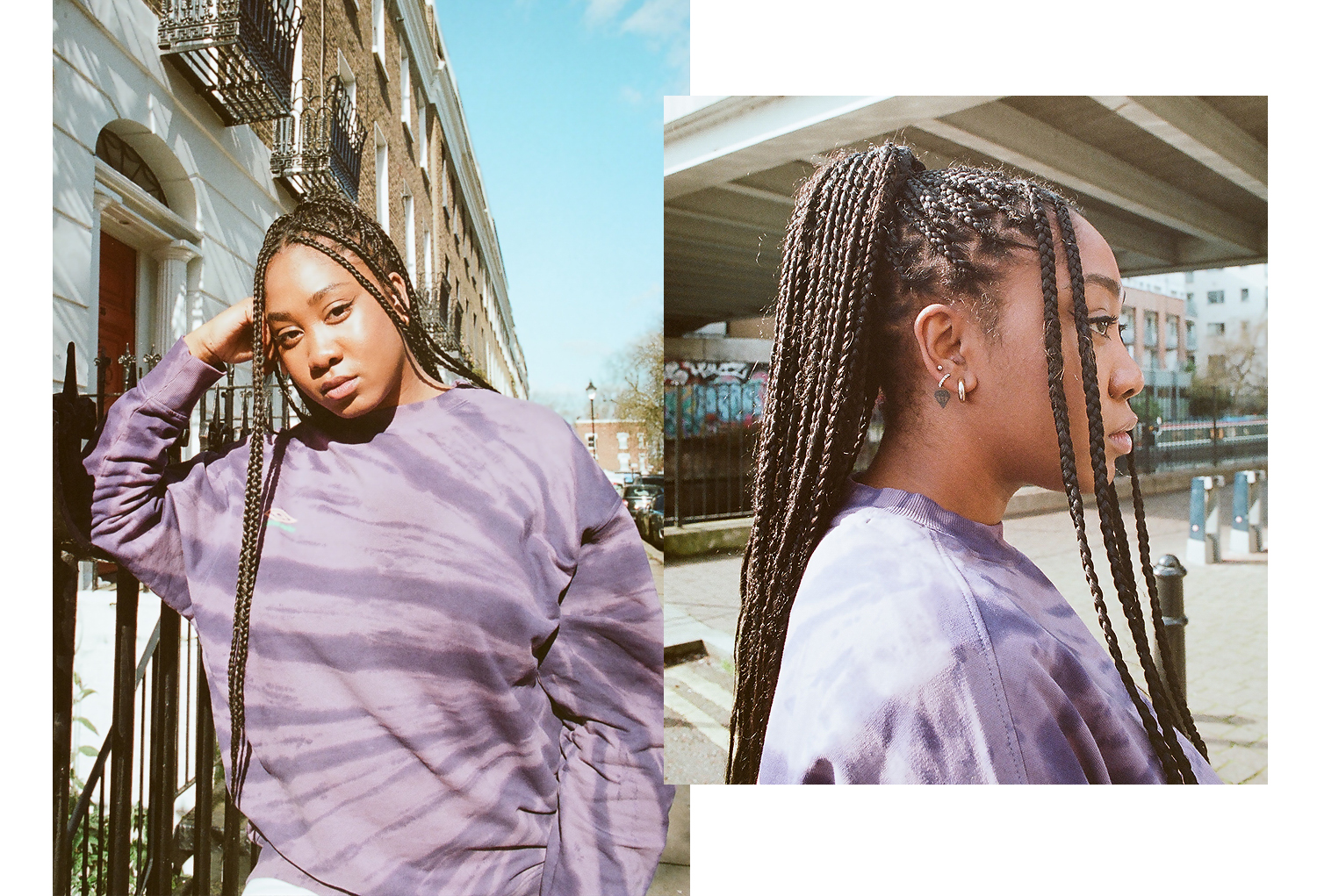 “Shooting on film is so nostalgic. It has a very timeless feel and I love the unpredictability of it.”

You’re wearing the new Umbro Projects collection today. How are you rating it? What’s your street style like?

This is definitely a bit of me, I like wearing comfy clothes that have a bit of colour to them…so this is sick. I wear a lot of tracksuits because when you’re shooting it can be quite a lot of moving around and you don’t want to feel constricted.

When did you first pick up a camera and what’s your journey been like from rookie to pro?

I had a DSLR camera during college but I never really liked it. I started shooting on film by usually just going to parties and shooting my friends or people I was around. At first I had a lomography fish-eye camera, which was cool but that look dated quite quickly! So I picked up a point-and-shoot camera from eBay, it was so cheap back then…I played around with those a bit and then I decided to make up my own shoots. I’d borrow clothes from PR agencies and contact models on Instagram, and I built it from there. People started seeing my work and my network started expanding, and work just started coming my way.

How would you describe your style? What makes you unique?

I guess only shooting in film is quite unique. It’s very expensive to do so I can understand that it puts people off, and digital feels safer in a way because you can constantly review your work, but I’d rather not do the job if it’s not going to be in film. I just feel more comfortable with it – I taught myself how to shoot by lighting, I’m not a wizard or anything but I’ve just learned to see what sort of shot will work on film!

Film is also just so nostalgic. It has a very timeless feel to it with the grain and colours…and I actually love the unpredictability of it. You never quite know what’s going to come out, and that’s exciting to me. I also love the idea of having to wait to see it – we live in a world without patience, so having to process the shots and wait for the result makes it more special in my opinion.

What are some of the biggest challenges you have as a pro shooter?

I think my time management has got a lot better! Especially working with football players, because what I’ve realised is that you just get no time with them. You might only have them in one to five minute time slots, when you’d probably expect to get a lot more! That challenge has definitely made me better though and it’s actually patterned me up with how to get the best shots in a limited amount of time. 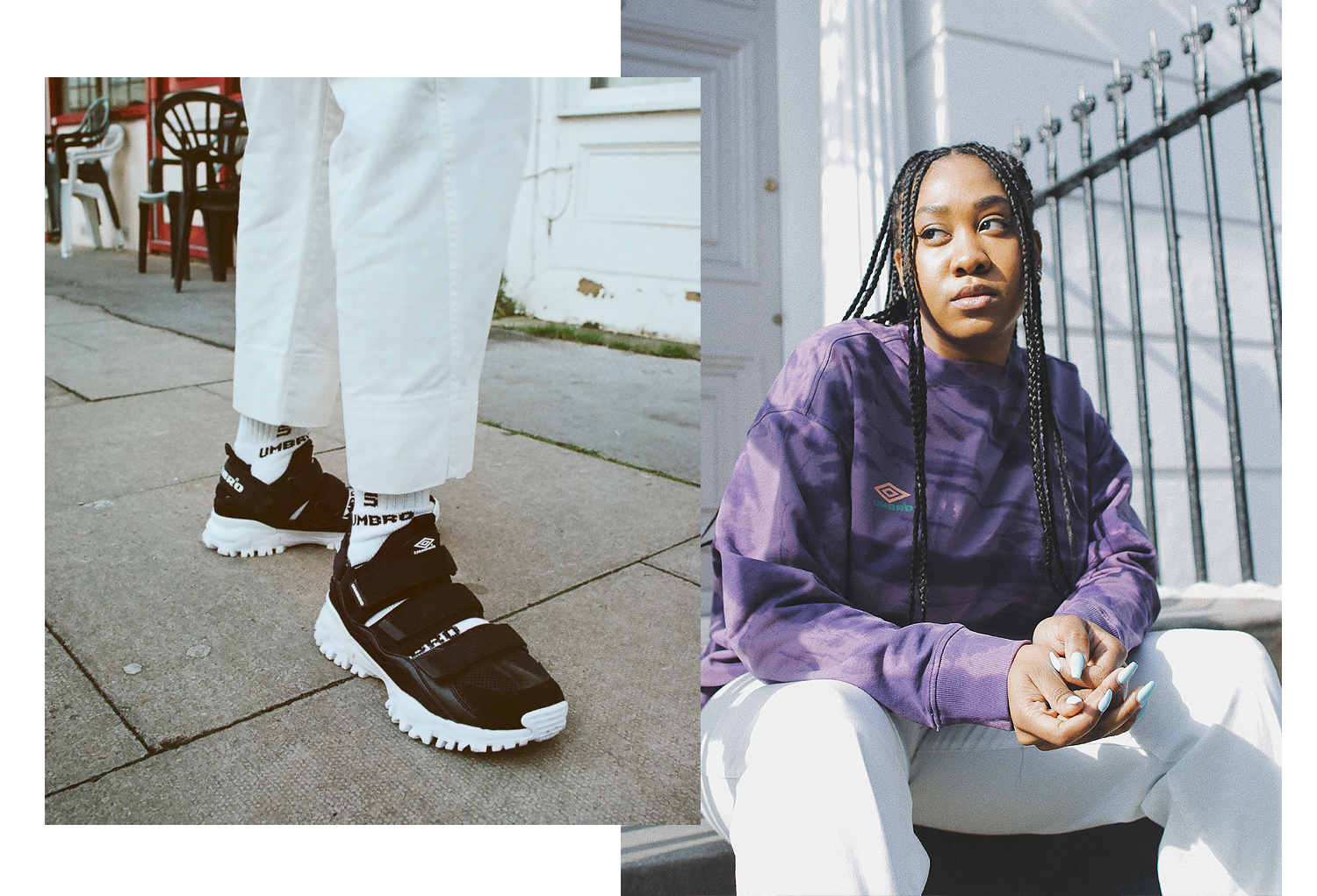 “I don’t always see a lot of personality in footballers when they’re being shot – I change that.”

How important is it for you to build relationships with your subjects? It must be difficult to get to know players when your time with them is so tight…

I always like to have a chat with the person before I shoot them, so they feel comfortable with me. It’s not a necessity but it definitely helps for them to like and understand the person that’s putting a camera in front of their face. It’s nice for them to have a bit of trust in you, because capturing how someone looks and feels on any given day is quite a big responsibility.

I think my aura is quite decent so when I’m shooting people we can usually have a laugh and catch a vibe. That helps me do what I need to do.

Why do you think football players like your images?

I think compared to the way I shoot – I don’t know, I don’t always see a lot of personality in footballers when they’re being photographed…but I think I can bring that side out of players more than other people. I want to try and bring out the human side of athletes.

I’m actually seeing a lot of football players being shot in film now, which is cool and I think I was definitely early on that wave. Typically, sports photography is very clear, athletic and sharp – whereas my stuff is softer and a bit more intimate.

You always seem to shoot the players in quite a fashion-forward way, do you think football is a very fashionable thing right now?

Yeah, definitely. Players like to express themselves a lot more at the moment and there’s still this thing where footballers are made to feel like they should focus only on football…but that’s not how young players always see it, and fashion is a big point of interest for them. Street style is also making kits look a certain way, and I think that helps the game be a lot more swaggy than it used to be.

Who have been some of your favourite people to shoot so far?

All my work with Hector Bellerin, Reiss Nelson and that have been great…Aaron Wan-Bissaka was also cool, and Anthony Joshua was someone I wanted to shoot for a minute and linking him was great! I’ve really liked working with Unknown T as well on the music side. I actually feel like I’m at a point in my career where I can do things that I like to do, and not put myself in uncomfortable situations so everyone I work with right now are people who respect me, and I respect back. 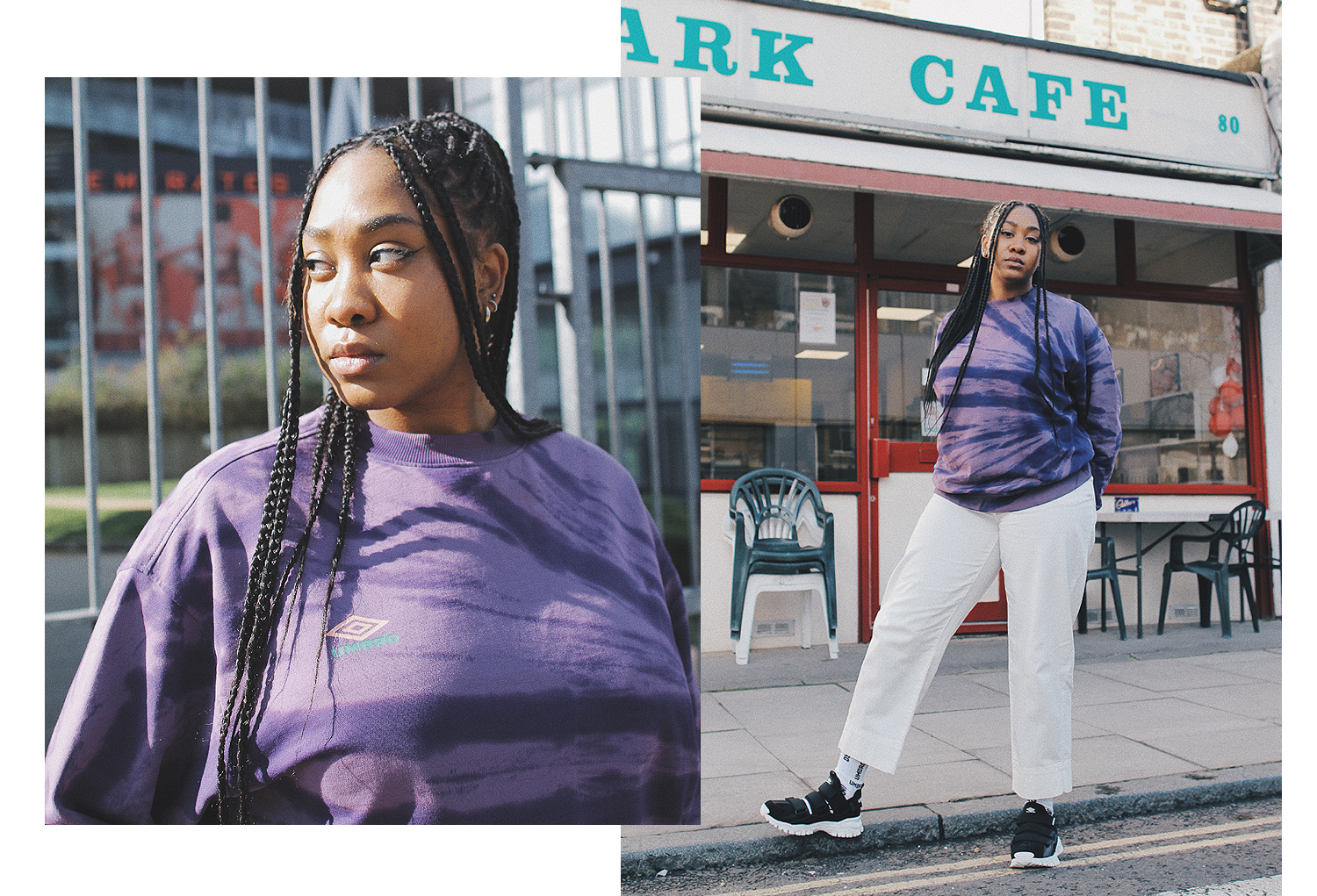 “I couldn’t see myself doing anything else…I think photography is my purpose.”

When you’re trying to make a photo really bang, how important is it to have a great fit in front of the lens?

Why do you do what you do? What’s your inspiration each day?

Not a lot of things make me happy but photography always puts a smile on my face and in my heart. I couldn’t see myself doing anything else. This is the one talent I’ve had that came easy for me, I struggled with a lot of other creative things at school. I never knew what I wanted to do when I was young but when I picked up a camera everything made sense and it’s positively impacted my life in so many ways – professional, personal, social…everything. I think photography is my purpose.